The Valorant esports scene is starting to fill out, as 100 Thieves becomes the latest professional organization to field a squad. Earlier today, the 100 Thieves founder and CEO, Matthew “Nadeshot” Haag, announced the team’s first signing. Spencer “Hiko” Martin is the first 100 Thieves Valorant player and will also captain the team. Known for his prowess in CSGO, Hiko is one of the most recognizable names currently in Valorant esports. He has the experience and talent to lead 100T effectively and should be the foundation for the squad. The rest of the team has yet to be announced.

A former professional CSGO player, Hiko has been around esports since 2011. He started competing in Counter Strike 1.6 around this time and has been a part of some dominant teams during his run. He was always an invaluable piece of any team thanks to his inhuman reactions and deadly shot. 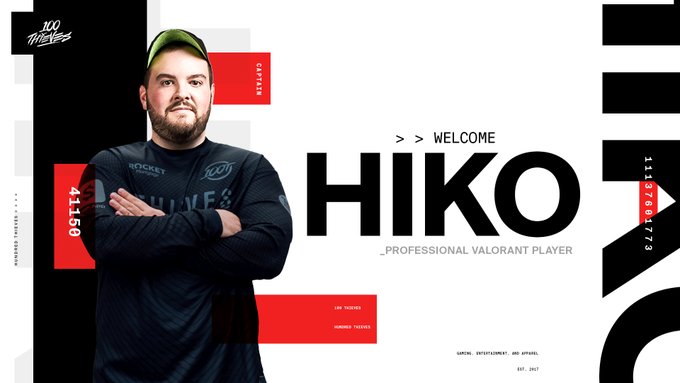 Hiko has been out of esports for around two years as he last competed professionally in 2018. However, he has been staying in practice during this time, waiting for an opportunity like the one 100 Thieves presented him.

During the Valorant Closed Beta, Hiko showed he can still compete with other top players. The 30-year-old was responsible for dozens of insane clips and performed well during the various tournaments he was a part of. Obviously, this was enough to have 100 Thieves give him the keys to the kingdom.

While the rest of the 100 Thieves roster is currently unknown, it’s presumed that Hiko will have a large part in deciding who is on the team. It’s unknown when more players will be announced, but 100 Thieves will likely want to fill out the roster as quickly as possible.

What do you think of the signing? Let us know, and keep up with Daily Esports for all Valorant news.