The 2020 League of Legends Pacific Championship Series (PCS) summer split starts June 20. Ten of the best League of Legends teams from Taiwan, Hong Kong, and Southeast Asia will compete for their share of the $71,000 prize pool.

While the PCS is only in its second-ever season, Riot is preparing for it to become a major region. This time around, two spots for the League of Legends world championship are up for grabs.

With the PCS only being in its second-ever season, no promotion series events have taken place yet. Because of this, the initial ten teams remain for at least one more season.

The most notable teams include the AHQ Esports Club, the Berjaya Dragons, Talon Esports, Machi Esports, J Team, and HK Attitude. In addition, Alpha Esports, Liyab Esports, Nova Esports, and Resurgence will also return for another season of the PCS.

The 2020 PCS Summer season runs from June 20 to Aug. 1. This follows delays in the previous season due to the ongoing COVID-19 situation.

The 2020 PCS summer season will start off with a rematch of last season’s grand finals, as Talon Esports face off against Machi Esports.

The PCS, like most regions, will start on the hotfixed League of Legends patch 10.11. Unfortunately, the key changes to Volibear aren’t included until the patch 10.12 update. That means that this recently reworked champion will likely not make an appearance.

For the remainder of the 2020 season, the PCS will continue its best-of-one format. The top eight teams from the regular season will qualify for the 2020 PCS summer split playoffs later this year.

How to watch the competition 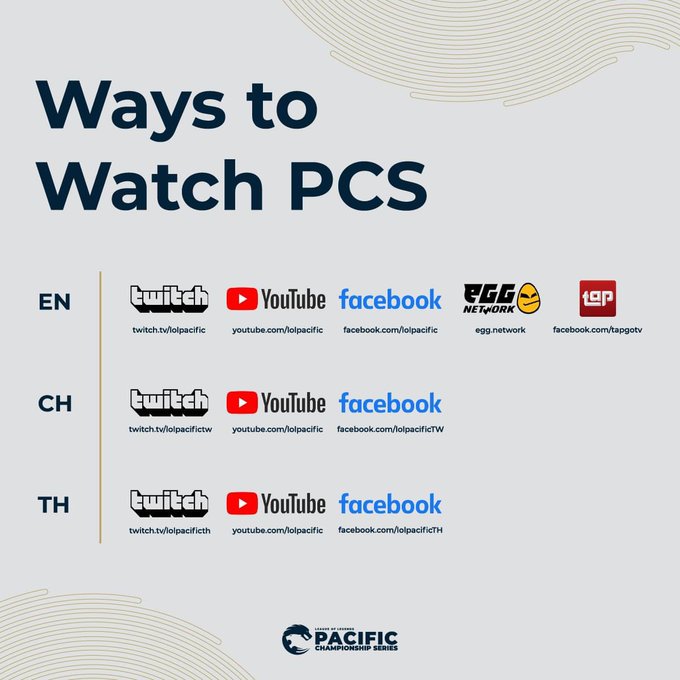 The PCS broadcasts are available on many platforms. The English, Chinese, and Thai broadcasts can be found on Twitch, YouTube, or Facebook‘s live streaming platforms. In addition to this, the English broadcast is also available on egg and Tapgotv. If you are looking for more of the competitive League of Legends scene, be sure to read all about the LCK.