The Fortnite professional yelled a racial slur on a streamer’s channel after an unfortunate in-game situation. The streamer immediately reprimanded Dubs, shouting, “Yo, I’m streaming! I’m streaming!” frantically. It didn’t take long for Twitch’s massive community to spread the clip around the internet. Dubs took to Twitter to comment publicly on the situation:

I can’t even describe how sorry I am. I did not intend to be hurtful in any way but what I said was still hurtful, insensitive, and wrong. The word shouldn’t have been in my vocabulary and I apologize from the bottom my heart to everyone I offended by using it. You deserve better

According to FaZe’s Twitter, the player’s behavior is unacceptable, and the organization prioritizes fostering an inclusive community.

A statement from FaZe Clan regarding Dubs. 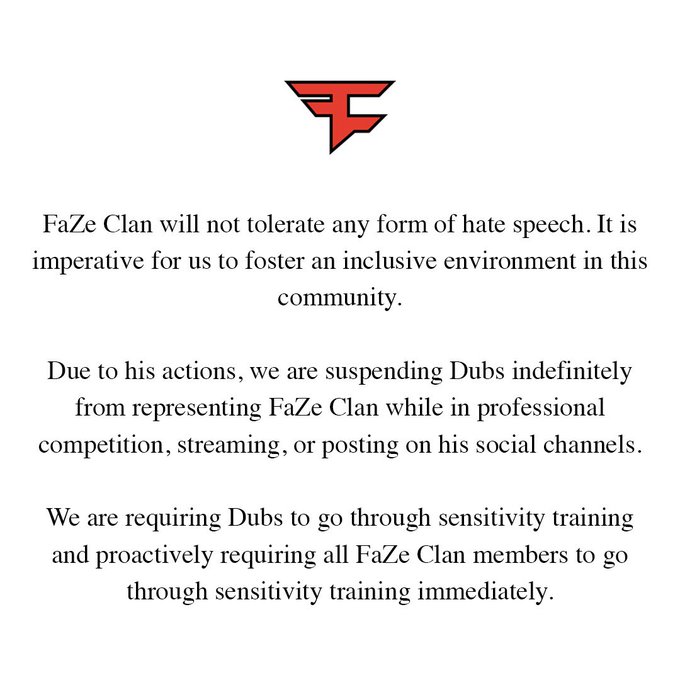 FaZe stated his suspension is indefinite. For the time being, he will not represent the organization in any capacity, including in professional competitions, in streaming, and on social media platforms. Additionally, he’s taking mandatory  “sensitivity training” alongside all other FaZe Clan members.

A history of FaZe suspensions and bans

In Dubs’ case, Twitch’s Terms of Service explicitly outlines hate speech isn’t tolerated on the platform. That being said, Twitch doesn’t have the best record in terms of being consistent with channel bans. It’s unclear whether Twitch will take further disciplinary actions toward the streamer or Dubs.

Stay with Daily Esports for all your FaZe Clan news — positive or negative.