With two days of action now behind us, the big players in each group are starting to come to the forefront.

After a big Day Two, it’s time for Day Three as the next round of teams play their second matches. Day Three saw another round of six matches as the remaining groups played out their second set of matches. 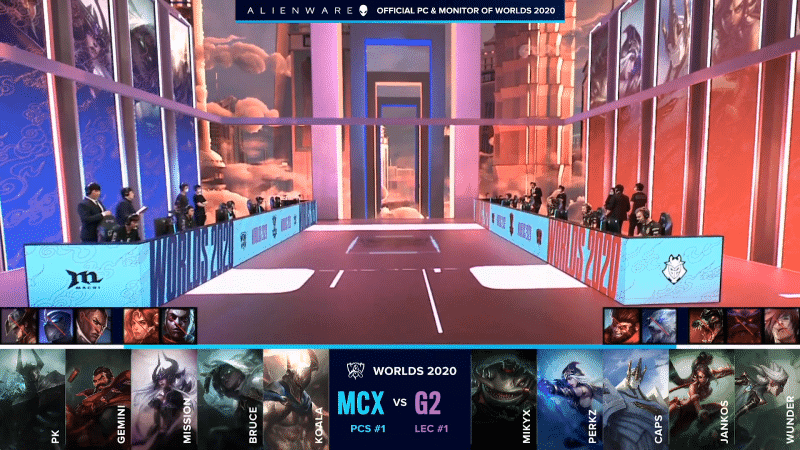 With their Game One upset victory over Team Liquid, Machi was looking to make a statement. For G2 they wanted to keep the momentum going after a nail-biting victory over Suning. It wasn’t the start Machi wanted, however. G2 sprung a level one trap in the top lane as Wunder managed to pick up the first blood. Machi managed to push into Jankos’ jungle and grab a well-deserved follow-up kill. However, Wunder was able to counter kill him as he gained some early advantages for himself in the top lane.

Madness descended upon the game at the nine-minute mark after Caps was taken down in the mid lane Machi moved towards the Rift Herald. They win the initial fight but as Perkz and Micky joined the fight, G2 took the extended fight with Caps re-engaging as G2 moved back into the lead. With small fights and skirmishes breaking out all over the Rift, G2 is able to bridge a 2.5k lead over Machi. With the fourth drake spawning on the map, G2 found their moment to pull the trigger and ace Machi. Caps come in late via the Hero’s Entrance and Machi just wasn’t able to stop it as G2 took the Baron.

A spark of hope

Machi pulled the trigger on a fight after they caught Mikyx. While they lost the initial fight, they turned it around as G2 lost three members for two in reply and wasted their Baron Power Play. G2 caught out Machi in their own jungle and turned the kills into a mid lane inhibitor. As they pushed to get down the bot lane inhibitor Machi were able to get a huge counter fight onto G2 as they secured themselves a Baron buff as they tried to keep their dreams alive. While it looked nervy for G2 at times, they found Machi in their own jungle, picking up the jungle and continuing their unbeaten record thus far. 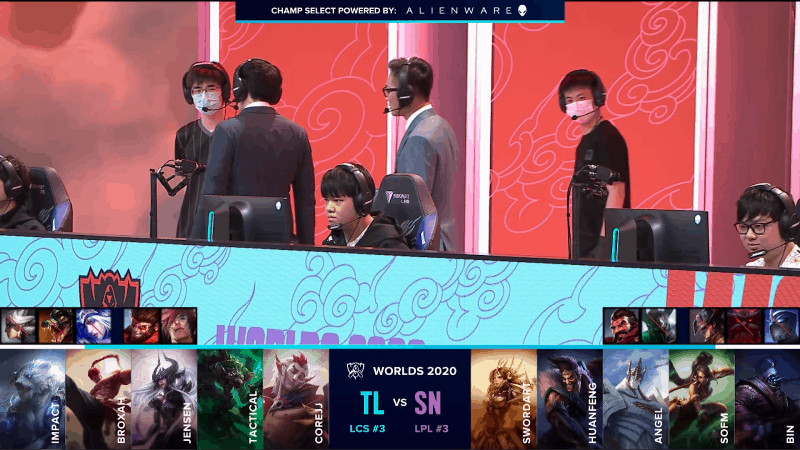 After a disappointing Day One defeat to Machi, Team Liquid (“TL”) were looking to cause an upset against Suning (“SN”) and get their Worlds 2020 journey online. Suning lost to G2, so needed a positive reaction against TL. First Blood goes to Suning as they find an opportunity on the top side. TL is able to quickly reply, however. SN continued to gain an advantage over TL in the bot side of the map as huanfeng and SwordArt kept denying minions and XP from the TL bot lane.

SN continued to mount an incredible 7.5k lead, having not taken another kill in the past 10 minutes. With three drakes and two Rift Heralds picked up, alongside five towers, SN seemed to be going through the motions as both Ocean Soul and Baron appeared on the map. TL had to contest but was unable to grab the drake. SN took down three members of TL and picked up the ocean soul as they moved to Baron. Jensen, however, had other ideas. He blindly stole Baron from under the noses of SN as TL tried to hold onto the game. While they might be over 10k behind, Tactical was able to get a huge 900g shutdown onto huanfeng as TL tried to keep hopes alive.

With SN picking up the uncontested Elder Drake they marched into the TL base and knocked it down nearly uncontested. A victory that looked easy in the end for SN, and one that will leave TL with a lot of work to do in the post-game. 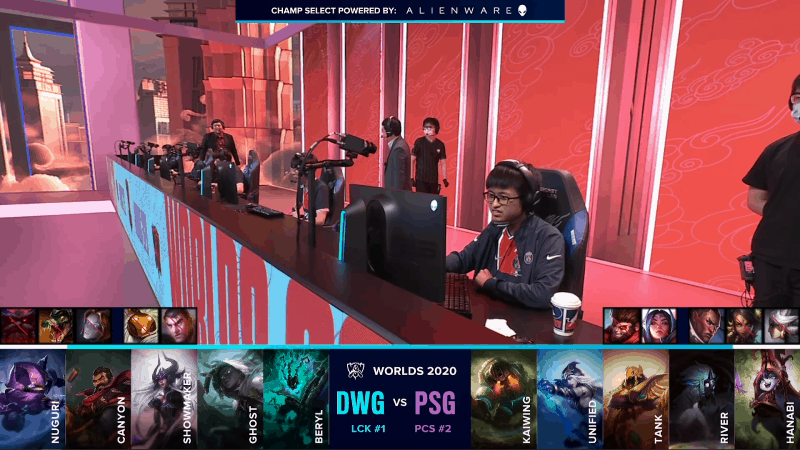 Damwon Gaming (“DWG”) went into the series looking to pick up their third win of Worlds and put one foot into the knockout stages. As for PSG Talon (“PSG”) they were looking to get a big upset win on the table as they tried to salvage their Worlds run. But it’s not the start PSG needed as Unified walks too far down the lane as his support walks away to help out his jungler. PSG was able to pick up a reply kill shortly after onto Tank.

It’s non-stop action in the early game as a 3v3 fight takes place in the bot lane as PSG picks up another kill. DWG got back on the board as they picked up an 11-minute first drake as they dropped the Rift Herald in the mid lane to gain a 1k lead. The game continued to slip away from PSG, after Nuguri picked up a tight, low HP, 1v1 against Hanabi with DWG moving to a comfortable 3k lead. PSG are able to stall out the Soul point of DWG for a little longer, however, the fight that followed was devastating for PSG. With Nuguri late flanking behind, PSG lost all five members with DWG picking up the Baron after the fight as they moved 8k ahead.

DWG slowly pushed in the PSG slowly after picking up the Baron buff. With the buff having expired, they engaged on PSG and that was all she wrote. PSG just had nothing to stop the advancing juggernaut as DWG ended the first round-robin with a 3-0 record. 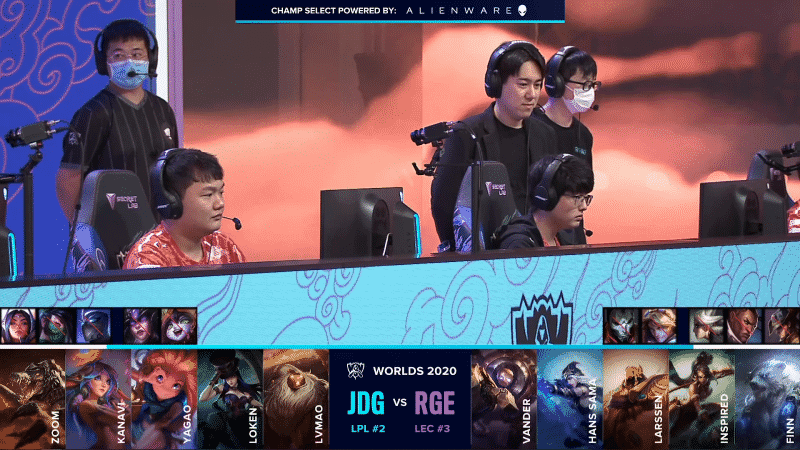 JDG vs Rogue (“RGE”) is a crucial match in the group. With JDG and RGE both picking up a 1-1 record thus far, the victor of the series would go into the second round-robin the favorite to claim the second spot. RGE went into the series as underdogs. However, their performance against PSG gave EU fans hope that RGE could do the unthinkable and make it to knockouts. First Blood goes over to JDG after they picked up the Rift Herald, while an extended fight sees both teams pick up a kill. RGE did manage to pick up a second in the tail end of the fight too though. While the early game was quiet, it picked up by the 12th minute. Here, another fight saw both teams claiming two kills apiece.

JDG picked up yet another crucial fight as they secured two more members of RGE and an outer mid lane turret. The play saw JDG move to a 3.5k lead. It’s another huge fight win for JDG as they pick up two big kills in the mid lane. They then transfer this into the Soul point drake. RGE claimed one kill back in return, though the gold lead grew to just shy of 5k by the 23rd minute. JDG picked up the key pre-Baron fight as they sank three members of RGE as they moved towards the soul drake picking up the remaining two members of RGE in the process.

With the Baron buff backing them up, JDG just slams through the RGE mid lane as the “sleepy sisters” put RGE to sleep. JDG goes up 2-1 in their group as they looked to cement their place as the second seed.

FlyQuest vs Unicorns of Love 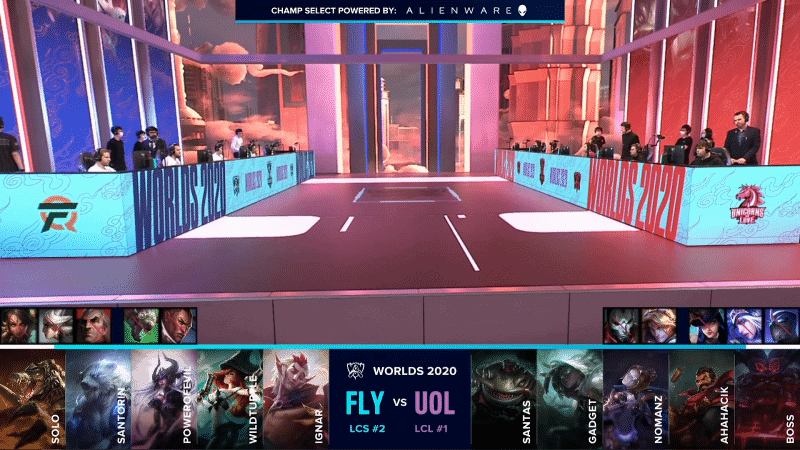 A crucial final game of the day for FlyQuest (“FLY”) and NA – with the region sitting at 0-5 FLY needed to get a victory against UOL. As for UOL, they looked strong in the Play-ins and surprised many with their performances. Victory for either side would be required if they wanted to pick up an unlikely spot at knockouts. It wasn’t the start NA or FLY needed as UOL are able to pick up the First Blood in the top lane. The early game remained completely even on the gold front, though the map situation seems favorable for UOL at this early stage.

As if they knew I’d said it, FLY decided that they wanted a gold lead as they got a huge double pick in the top and mid lane, with a 1k lead going their way. FLY look to take their lead and cut down UOL at mid game point. As they push to take the tier three UOL bot lane turret they fumble the play and UOL claim two of the FLY members as they then move to claim Soul point and reduce FLY’s gold lead. It goes from bad to worse for FLY as UOL continued to pick up kills around the Baron buff, though it remained for the time being.

FLY on the board

With the Soul drake on the map again, FLY and UOL find the time to fight. The first round of fighting goes the way of FLY, though UOL won the second phase knocking FLY down to just two members. Not to be outdone, PowerOfEvil again comes in clutch to keep FLY alive in the game. UOL picked up kills on the back end of the fight but with people respawning UOL is forced to retreat as they pick up the drake and stop UOL picking up the soul drake.

With Baron on the map FLY somehow managed to take the Baron and the kills as Santorin came in huge for FLY as they pushed down the mid lane. The death timmers are too long on UOL as FLY brings it home. 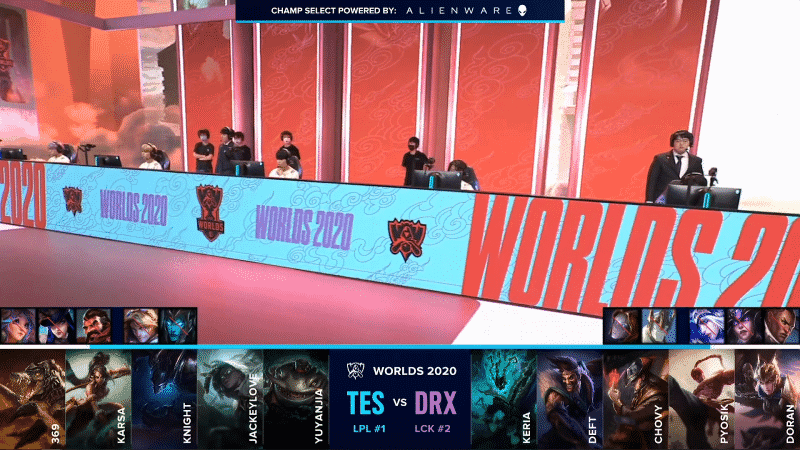 TES and DRX were already hyped as the top two placed sides in the group, so a battle between them has been hyped up since groups were drawn. Both TES and DRX looked dominant in their first games. Plus, the winner of this game is likely to be the favorite for the first spot out of the group. DRX picked up a massive first blood as Pyosik paths top. 369, having recently used his TP to make it back to lane loses out massively on XP and gold as he fell even further behind.

DRX took an early game lead of nearly 2k, thanks to great tower plate play. The game’s first real team fight happens at the third drake spawn. While DRX started the drake off, it’s TES that steal it away and kill off the DRX top laner in the process. DRX maintained a small 2k lead, though TES were certainly coming online. Both teams posture over soul and Baron, though neither are taken. A fight goes the way of TES in the top lane as they pick up two kills and transition it into a Baron buff. Thus, they swing the gold lead over to themselves. While TES looked to start making plays with their Baron buff, DRX caught out Knight on the retreat. His team followed up his death so DRX picked up the Ace as the Baron buff was wiped out.

The Soul point is up on the map for TES. However, DRX is able to hold them off as both teams handshake and disengage. TES took their opportunity to push down the mid lane, while DRX is more interested in the disengage, TES dropped four members of DRX and claimed the mid inhibitor. They could not be stopped, however, despite the best efforts of the respawning DRX. TES moved to 2-0 with that win as they fully insert themselves as a favorite for Worlds 2020.