Hecarim and Lux have joined forces to create a build that utilizes Legends of Runeterra Ephemeral spells, Lifegain, Rally, and Final Spark.

A wide variety of Control and Aggro decks flooded the meta following the 0.9.0 LoR patch. But a mid-range build mashing the Shadow Isles and Demacian regions together with Lux, Hecarim, and Thresh has entered the fray. Despite recent nerfs to Commander Ledros and Rhasa, the Sunderer, Ephemeral cards and spells remained untouched. And with the recent buff to Lux, combining the two regions makes up for any S/I weaknesses exposed within the recent LoR update.

Hecarim remains one of the most powerful champions in LoR, but the nerf to Rhasa and Commander Ledros slowed the Ephemeral decks down a turn or two, allowing other archetypes to find lethal attacks first. By combining S/I with Demacia, though, an opportunity arises with Shadow Lux. 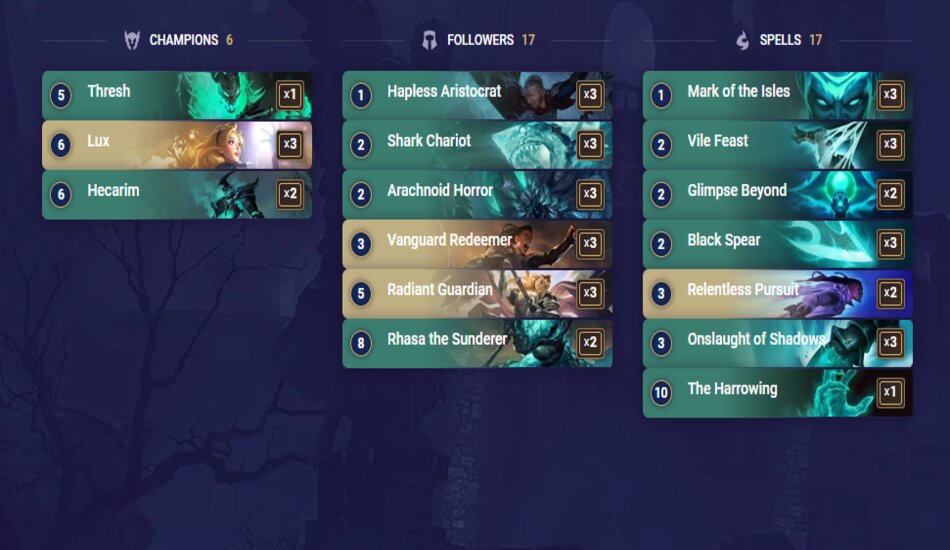 Cards such as Vanguard Redeemer and Radiant Guardian produce the necessary cantrip and Lifegain to survive Aggro Burn while matching tempo with Control decks, in conjunction with the spells Vile Feast and Glimpse Beyond. And champions like Lux, Hecarim, and Thresh can achieve lethal attacks with a little help from Relentless Pursuit.