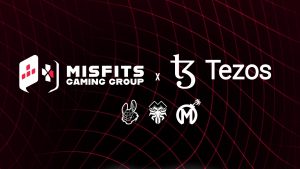 Vas Roberts, EVP Partnerships, of Misfits Gaming Group, commented: “Gaming can do a lot better, and blockchain technologies will help get us there. By building new practices upon a decentralized, indexed platform, we’ll reimagine how we work with our community, peers, and partners.

“Tezos will help us share new levels of access, equity, and decision-making, and we’re thrilled to pioneer how blockchain can help gaming organizations redefine how they operate.”

Misfits has also announced that the company will refocus its $10m gaming incubator MSF IO, to become the MSF Tezos Gaming Incubator. The incubator will help identify and invest in esports and gaming startups, as well as startups that build directly on the Tezos blockchain.

Mason Edwards, Chief of Staff, Tezos Foundation, added: “At such an exciting time for the broader gaming and esports industries, Misfits Gaming Group’s choice of Tezos as its official blockchain adds to the momentum that is growing for blockchain gaming— with community building and player engagement as a priority. “

The partnership with Misfits is not Tezos’ first foray into esports The company notably signed a multi-year deal with French esports organisation Team Vitality earlier this year. Tezos is also a technical partner for McLaren Racing and is supporting the company’s sim racing efforts.

Esports Insider says: Tezos and Misfits are making a big step in blockchain gaming, which is different to the approach of a number of other esports organisations. It remains to be seen how effective will this part of the partnership be and what will Misfits be able to do in the blockchain gaming space with the help of Tezos.