There isn’t a rarer cosmetic item in Apex Legends than the Heirloom Sets. Currently, there are four legends who own an Heirloom item, with one more, Octane, arriving with the System Override event. Up until now, the only way to earn an Heirloom was to sift through Apex Crate after Apex Crate until you were lucky enough to earn one. For each set, it’s estimated to take around 500 crates to unlock just one. However, this process will be changing according to a Respawn developer.

As it takes around 2,000 Apex Crates to earn every Heirloom currently in the game, fans take this situation seriously. Some players drop hundreds of dollars to try and unlock the Heirloom Set for the main legend.

Although, sometimes the process comes back to bite these players. As the Heirloom you receive is completely random, some players unlock sets for legends they don’t use at all.

This is extremely frustrating, especially if you’ve spent money and tons of hours playing Apex Legends to earn an Heirloom. Well, in the future, this unfair system looks to be taking a turn.

According to “Salad Guy”, a developer at Respawn, the company is changing up how players unlock Heirloom Sets in Apex Legends. @iLootGames has the screenshot for us.

Wow this is big 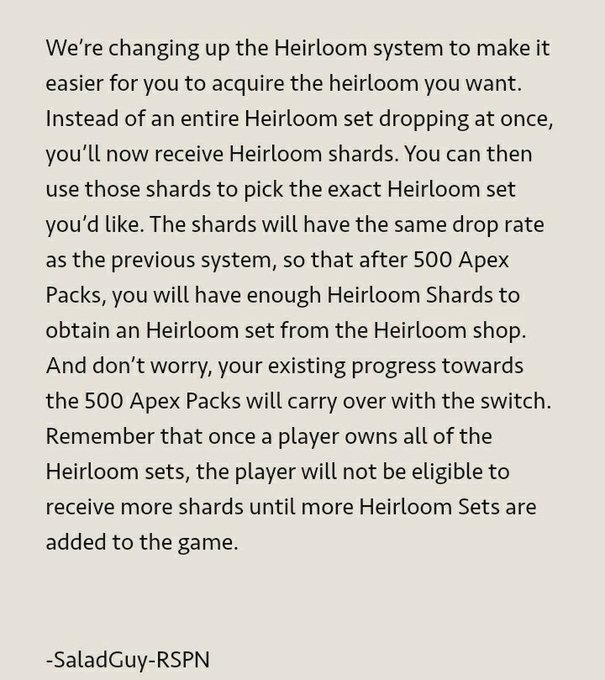 This is huge news for the Apex Legends community. Now, or whenever Respawn enables this system in-game, you earn Heirloom Shards. These Shards drop at the same rate as Heirloom Sets, but they act differently.

Of course, this system is moot for those who own all Heirloom Sets in Apex Legends. Though, with Octane’s set releasing next week, this should help everyone out.

Make sure to keep up with Daily Esports for all Apex Legends news.