Smartwatches have become a huge business over the past several years, evolving past the “why do people need these” phase into trusted health monitors and secondary communication devices for millions of people. Apple currently dominates the global market with watchOS-powered Apple Watches, but Google’s Wear OS is at the core of numerous competing devices, notably including smartwatches from Fossil Group and its many fashion-focused sub labels. These companies continue to update their hardware and software on an annual or semi-annual basis, seeking both to satisfy existing users and win new smartwatch adopters.

As we move into the traditional fall upgrade period for these watches, both platforms feel somewhat stagnant. Apple’s preview of the upcoming watchOS 7 was decidedly underwhelming, following last year’s disappointingly modest tweaks to the Apple Watch Series 5. Google has revealed even smaller improvements for Wear OS, and its simultaneous failure to release a self-developed Pixel Watch has led to speculation that it’s preparing to abandon the smartwatch business. That appears to be unfounded — key hardware partner Qualcomm just announced new Wear OS-ready chips, and Google acquired a watch engineering team from Fossil — but even so, neither platform appears likely to make a truly big leap forward in the immediate future.

I’ve had the chance to use the latest versions of both watchOS and Wear OS, as well as covering Qualcomm’s next-generation Snapdragon Wear 4100 platform launch, so I have some thoughts on where these wearables are and aren’t headed over the next year or two. The good news is that they’ll both keep getting better, if slowly, but the bad news is that one of the biggest potential game changers for business and consumer smartwatch apps — higher-speed 5G connectivity — is likely still at least a year if not more away. Here’s what you can expect this fall, and thereafter.

I’ve been testing beta versions of watchOS 7 for nearly two months, and the best thing I can say about the upcoming release is that it’s stable. It adds only a small handful of features, none a game changer, and unless something big happens over the next two months, most users will hardly notice the difference from last year’s watchOS 6. Apple appears to be either unsure about taking big steps forward, or limited by the constraints of current-generation hardware. 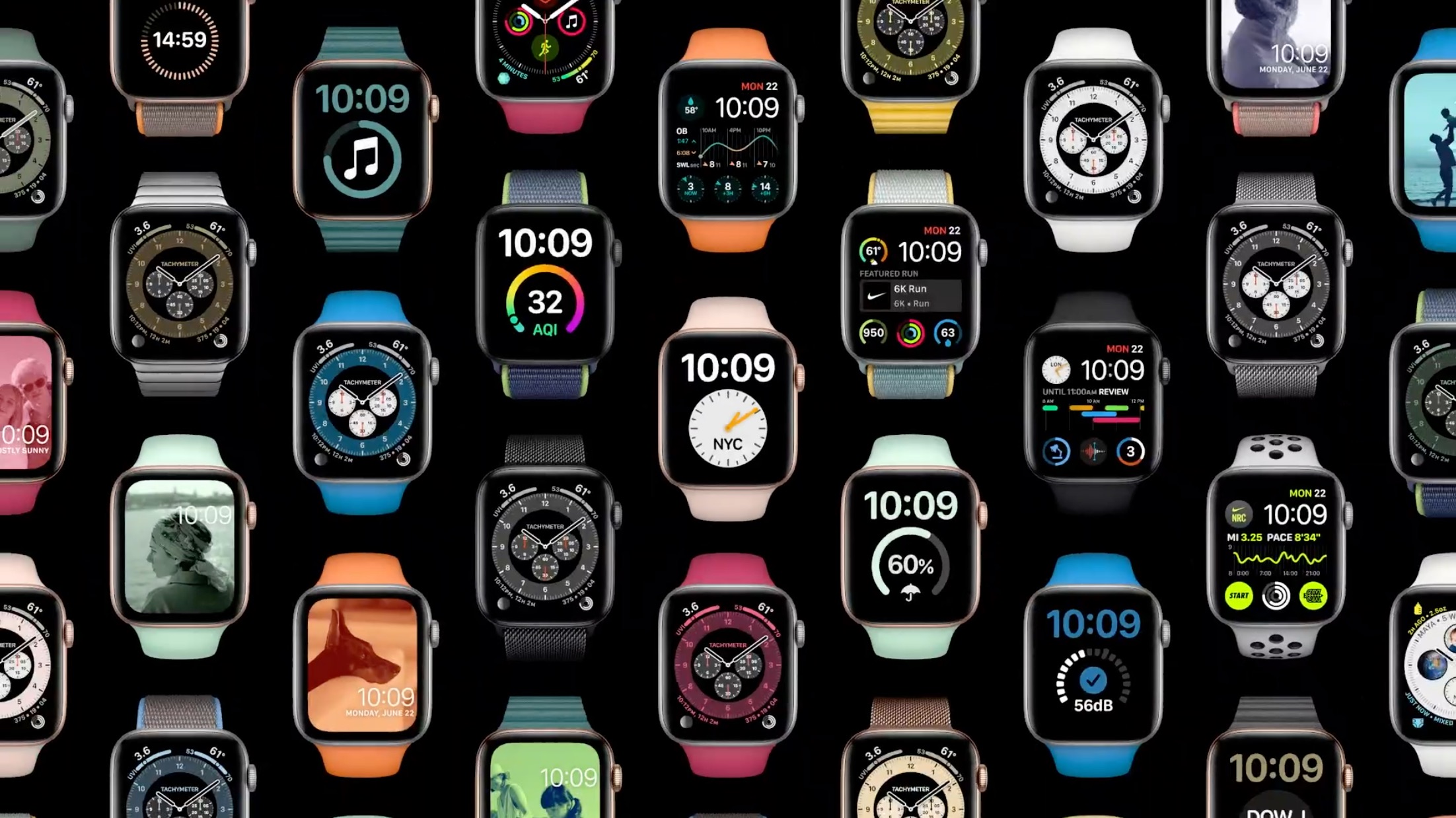 This is the first year when Apple is offering public betas of watchOS ahead of its fall release, and so far, the betas have been about as solid as final releases — except for hiccups I’ve experienced in one of the new features. A COVID-19-inspired automatic hand washing timer supposedly uses machine learning to detect the sounds and motion of hand washing, but has remained uselessly buggy on my otherwise great Apple Watch Series 4. Even in the latest beta, it rarely triggers at all when I’m using a sink, and has never in two months completed a single 20-second countdown. (A friend with a Series 5 watch has experienced intermittently better results, so I’m not sure how this will play out in the final watchOS 7 release.)

Apple’s new Sleep app has remained decidedly underwhelming since the earliest beta, using motion and device usage data to guesstimate time spent in bed and asleep. In post-reveal interviews, Apple executives suggested they deliberately kept the metrics basic to avoid freaking people out about their sleep patterns, which might be true — or might be a convenient excuse. In either case, the only impressive element of the feature is that the Watch and iPhone work together to convince you to stop using them as you settle down to sleep, which is handled more gracefully than the iPhone’s oddly laggy, low-detail sleep reporting.

Curiously, while watchOS 7 is only introducing a single new watch face, Chronograph Pro, Apple has added a feature that lets users publicly share the Apple-permitted customizations they’ve made to faces, such as color changes and complication selections. My best guess is that this is a prelude to offering third-party watch faces — a glaring omission in watchOS — but Apple has disappointed those of us waiting for this feature time and time again, so I’m not holding my breath for it to magically happen with the Apple Watch Series 6. As I’ll explain below, however, it’s a possibility.

Apple is also tweaking the Workouts app with additional types of fitness activities, including dance tracking, ahead of what might be two major fall developments. According to a recent report, Apple will debut a subscription fitness video service that ties into the Apple TV and Apple Watch, potentially using motion data, and may also add blood oxygen level monitoring to the Watch if it can win FDA clearance for the feature. While neither of these features would be legitimately huge, each would tick off a “nice to have” box for some users.

Comparing watchOS 7 directly against the latest release of Wear OS on a Fossil Gen 5 device, two things really stand out about Apple’s implementation: Speed and polish. Even on a two-year-old Apple Watch Series 4, literally everything (except the hand washing feature) is faster and smoother than on Wear OS, including Home Screen responsiveness, timepiece-to-Home and -app transitions, and in-app interactions. Bugs that Apple eliminated years ago, such as continued flashing of the heart rate sensor after removal from a wrist, are still obvious in Wear OS, while random full device resets are similarly super rare on the Apple Watch but pervasive on Wear OS. Whatever watchOS lacks in innovation, it makes up for in system-level smoothness, and that counts for a lot in something you want to use quickly rather than plodding through.

If I had to sum up the latest version of Wear OS on Fossil’s Gen 5 watches in two words, they would be “modestly confusing.” Unlike the Apple Watch, which feels almost feature complete but too limited, Wear OS feels like a work in progress that has the potential for greater functionality — if you’re willing to suffer through some janky issues to get there.

Take, for example, how Google numbers Wear OS versions. After Fossil’s mid-August software update, the “core OS” remained at version 2.17 — originally released in April — with separate version numbers listed for the Home app (2.35), Google Play Services (20.30.19), system (H MR1), and Android security patch level (July 1, 2020). By contrast, Apple’s watchOS is just version 7.0, and will only get a digit more complicated (such as 7.0.1 or 7.1.1) with future updates. With Wear OS, most users are best off just ignoring those details, because they’re mind-numbing.

Last week, the company announced so few user-facing improvements in the upcoming Wear OS Fall update that we didn’t think them worthy of a news story. Prominent on the list of “new” features was an already-released hand washing timer. Despite looking way less impressive than Apple’s version, and lacking machine learning “auto-activation,” the Wear OS timer actually works since you can manually turn it on. Unfortunately, the only other announced app change is a redesigned weather experience, which isn’t yet available. It looks nice in screenshots, but isn’t exactly a big deal.

Google is also working on under-the-hood performance improvements. Wear OS is supposed to be getting up to 20% faster when starting up apps on current processors, while setting the stage for further improvements with future Snapdragon Wear 4100 watches. There’s also the promise of “more intuitive controls for managing different watch modes and workouts,” which Wear OS currently stumbles through. Thanks to Fossil’s just-released Wear OS update, Gen 5 users now have a Wellness app with activity, sleep, and cardio fitness tracking, in addition to Google’s Fit Workout app with its own pages of workout tracking options. There are also multiple battery modes users are supposed to manually switch between to conserve power. Simplifying all of this would be great.

The flip side of Wear OS’s less streamlined approach is greater choice. As just one watchmaker, Fossil ships Gen 5 with around 50 legitimately different watch faces, while third-party apps such as Facer enable thousands of additional free and paid faces. Facer caused crashes and slowdowns on my Gen 5 watch, but a smaller app — Pear Watch Face — has been more stable, and includes a handful of Apple Watch-like faces, even one inspired by the Nike+ variant of the Apple Watch.

These two apps perfectly distill Wear OS’s strengths and weaknesses compared with watchOS. You can make a Gen 5 watch’s timepiece look exactly like you want, a massive attraction, but you may compromise stability in the process, and may wind up falling back to something simpler — and Apple-caliber neutral — just to get something that fully works. Solving the problem of offering broad user customization while guaranteeing a smooth, stable experience is arguably the most pressing challenge Google and Apple face going forward.

Qualcomm’s briefing on the Snapdragon Wear 4100 platform was critically important because it makes clear where flagship smartwatches are headed over the next year. Wear OS will require a version called the 4100+, which includes both a quad-core CPU and a separate co-processor capable of handling persistent but smaller tasks without consuming CPU-class power. Over time, the goal is to evolve smartwatches into miniature smartphones with the ability to independently run phone-class apps over Wi-Fi or cellular connections. In the more immediate future, 4100+ watches will be able to display more sophisticated maps, run Google Assistant and Google Translate natively rather than needing a companion phone, and use up to two integrated cameras for video calls and photography. 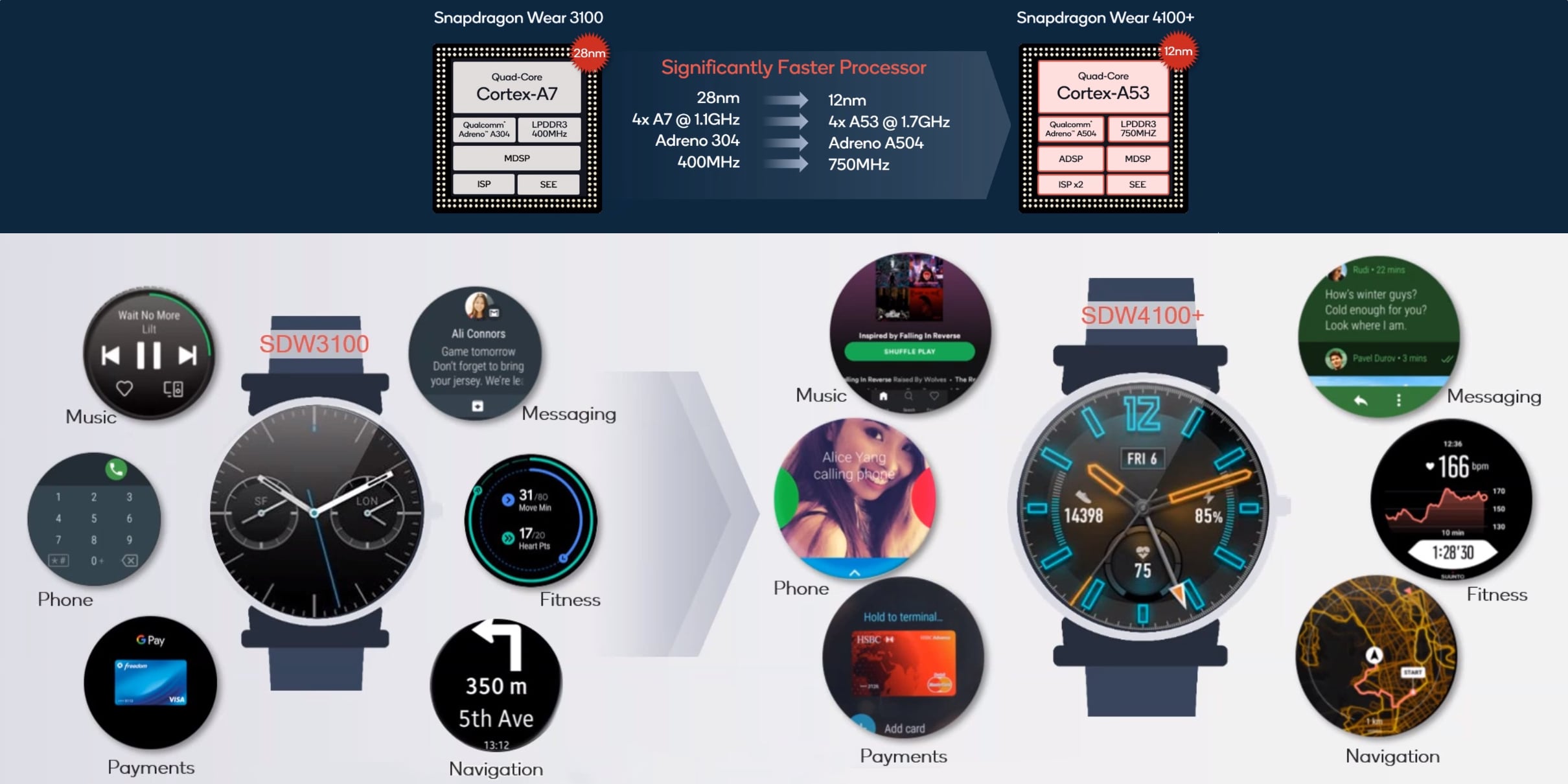 Some OEMs are going to embrace nearly the full range of these capabilities fairly quickly, bringing video calling and more powerful apps to Wear OS watches within the next six months. Others will upgrade current Wear OS designs to be faster and smoother, while making better use of their screens with more complex and colorful graphics. Wear 4100+ will enable an always-on watch display to display a wider range of colors and features than before without waking up the power-hungry CPU. Though Apple creates its own S-series chips that compete with the Snapdragon Wear series, I would be extremely surprised if new Apple Watches failed to match or exceed these enhanced always-on screen features in the near future.

One big omission is 5G. It appears that Qualcomm’s watch-based 5G modem plans are awaiting NR-Light, a future update to the 5G standard focused on devices with lower power consumption, including watches. NR-Light is expected to enable small devices to handle 100Mbps downloads and 50Mbps 5G uploads, on par with common 4G smartphones, without destroying their batteries. Since Apple and Google both depend on Qualcomm’s watch modems, it’s safe to assume that they won’t be releasing 5G wearables until 2022, when the 5G Release 17 specification is expected to go final after COVID-19-related delays.

It’s also worth noting that Apple and Google aren’t the only players in smartwatches, though they are representative of the segment’s broader challenges. Samsung just released its Galaxy Watch 3, which barely seemed like an advance over its predecessors, and Huawei is just one of many Chinese manufacturers with mostly me-too designs and features. No one is currently proposing a big leap forward, and that general sense of sameness is seemingly what forced Fossil to create its own new features to appeal to users, past whatever Google was offering.

Keep your eyes open for the Apple Watch Series 6 over the next month and a half, as well as whether Apple moves the Series 4 or 5 to a lower price point as it did with the Series 3, to its great success. As boring as it sounds, it’s entirely possible that this fall’s smartwatch story won’t be about innovation, but rather the greater affordability and ubiquity of established technologies. But I’m pretty sure that early Snapdragon Wear 4100 OEMs will try to lure new customers in by leveraging camera hardware and Wear OS to deliver “beyond Apple” experiences. We’ll have to see whether mainstream users are willing to bite.