It’s easy to describe early 5G networks right now as messy: under-built, inconsistently performant, and quite likely to confuse potential users. All of the major carriers now portray 5G as a journey, not a destination, and since customers won’t necessarily find 5G signals wherever they go, initial attempts to squeeze them for extra monthly 5G access fees have mostly gone away, at least for now. As such, when the iPhone 12 and iPhone 12 Pro officially hit stores this week, many customers will switch from 4G to hybrid 4G/5G use without much friction.

While Google’s 5G updates to Android have been public for quite some time — dating back to Android 10 and continuing with Android 11 — Apple’s work on 5G has been cloaked in secrecy, at least on the software side. Although the company made a highly public deal in April 2019 to secure Qualcomm modems for its first 5G iPhones, it offered no clues as to how its iOS operating system would handle emerging challenges such as connecting to low, mid, and high band 5G networks, or issues over limited versus unlimited 5G data. Improperly executed, the impact to businesses and end users alike might have been immeasurably high, including everything from unexpectedly poor network speeds to massive monthly bills.

This week, Apple officially revealed its user-facing approach to 5G in a new support document for iOS 14.1, and while the details aren’t hugely different from what Google’s doing in Android 11, they’re more interesting than might be expected. Here are some of the high-level takeaways.

Apple’s definitely working with and covering for the carriers

Back when AT&T announced it was going to market late-stage 4G as “5G Evolution” by adding a “5GE” icon to Android phones, some people hoped that Apple wouldn’t play that misleading game, which ultimately got AT&T sued and censured by a national advertising watchdog. But Apple did, adding 5GE to the iPhone 11, and iOS 14.1 shows that it’s now going a step further, adding three new icons to the iPhone 12: “5G,” “5G+,” and “5GUW.” Google did the same thing with Android earlier this year, allowing carriers to differentiate their low and mid band “5G” from whatever marketing names they use for high band millimeter wave 5G (AT&T’s “5G+” or Verizon’s “5GUW”).

Clear? Not especially, but it could be worse. Most U.S. users will now see their phones flip between 4G, 5G, and either 5G+ or 5GUW depending on locally available networks, which is only three possible states (excluding older 3G and EDGE) to worry about. Based on the watchdog’s ruling, it’s unclear whether AT&T’s 5GE icon will also disappear, leaving one fewer thing to confuse users.

Apple is going further than Google, however. Starting with iOS 14.1, iPhones will display these icons not just when they’re actually using those connections, but whenever they’re determined to be available. Apple calls this a feature of “Smart Data mode,” explaining that if your phone is on “5G Auto,” it will check whether your current 5G connection provides a “noticeably better experience” than 4G, and if not, use 4G instead of 5G.

In other words, “Smart Data” exists entirely to keep iPhone users from seeing and suffering from their mediocre low band 5G service. iPhones will keep showing “5G” icons, yet not actually use non-performant 5G connections. For users, the only thing worse than this is the Android status quo — henceforth known as “stupid data?” — where phones sometimes connect to shaky 5G and either slow down or completely stall out.

A feature like “Smart Data” wouldn’t be necessary if carriers were consistently delivering the high-speed 5G performance they’ve been promising for the last two years. But that’s where we are right now.

One benefit of Apple’s belated arrival into the 5G phone market is that some early carrier squabbles over charging premiums for 5G access or unlimited data have largely been resolved in consumers’ favor. As Android 5G phones began to hit stores, the Chinese and South Korean governments pushed carriers to make 5G service as affordable as possible. Even absent government pressure, top U.S. carriers ultimately decided to offer unlimited 5G access at the same prices as unlimited 4G plans, with the caveat that currently hard-to-find “5G+” or “5GUW” access might be restricted to more deluxe unlimited bundles. 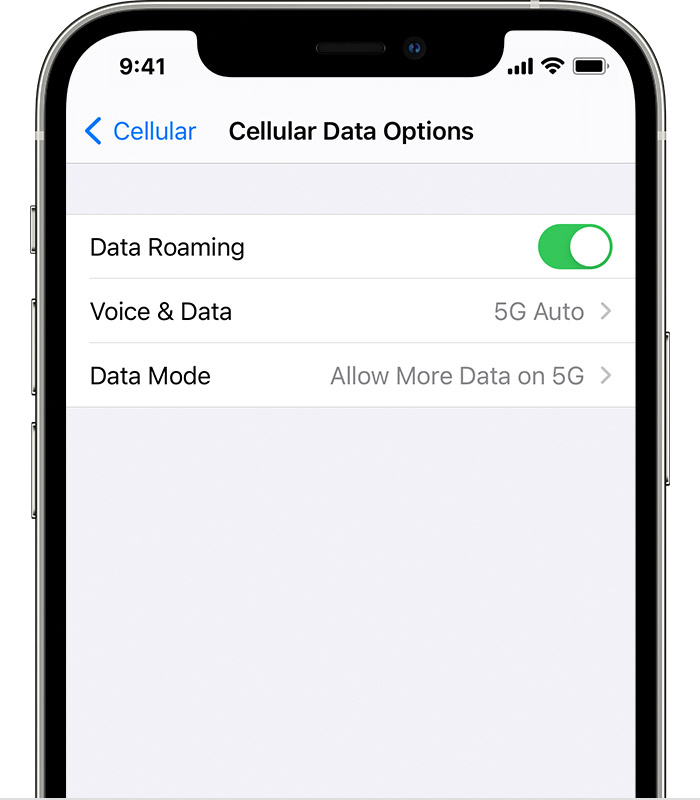 Since there isn’t a one-size-fits-all 5G plan across the world, iOS 14.1 has added a new Data Mode selection: “Allow more data on 5G.” Selecting this option increases the data bandwidth for two-way FaceTime video calling, videos in the TV app, and music, as well as third-party apps. Users will also be able to download iOS updates over cellular for the first time, as 5G networks (probably) won’t be choked by the multi-gigabyte transfers even when millions of people request them simultaneously.

Android 11 gives developers the ability to check whether the current network is “metered” or “unmetered” for data consumption, which it refers to as “meteredness.” If the network is “temporarily or permanently unmetered,” developers can deliver 4K video, proactive/pre-fetched downloads of content, and other features that might previously have been reserved for Wi-Fi connections. Google refers to this as turning “indoor use cases into outdoor use cases,” and “niche use cases into mainstream use cases,” terms that may have seemed less ambitious before COVID-19 lockdowns.

Apple continues to offer “standard” and “low” data modes, reducing FaceTime and video quality for “standard” cellular connections, and disabling background tasks and other updates in “low” usage conditions. Users unlucky enough to be on data capped 5G plays will likely need to keep “standard” on at all times, as a fast 5G connection could eat through the entirety of a 10GB monthly data plan in minutes.

Apple suggests that 5G data roaming is still in an early deployment stage, and thus turning on the Data Roaming switch will only deliver cellular data “through 4G or LTE networks when you travel.” That’s only partially true. Vodafone U.K. announced 5G roaming support across Germany, Italy, and Spain in July 2019, with a promise to rapidly expand to other European countries, while Korea Telecom offered 5G roaming in China, Finland, Italy, and Switzerland starting in September 2019. Put another way, international 5G roaming has been around for more than a year, so Apple looks to be lagging behind in support there.

Additionally, Apple is apparently still working on its Dual SIM implementation, as it disclosed that using SIMs for two lines will for some reason prevent 5G from working on either line in countries other than China, a limitation that could prove problematic for some business travelers in the future. The company suggests that customers needing 5G should “obtain a local SIM card or eSIM and use it as a single line with 5G where available,” a workaround that will hopefully only be temporarily necessary.

In China, Apple says the Dual SIM capability only works fully with the initial “non-standalone” version of 5G, not the newer standalone version; turning 5G Standalone mode on will activate 5G solely on one SIM, and disable it on the other. Without getting deeper into the weeds and potential confusion there, it’s clear that there’s still work left to be done on the software side to make the new iPhones connect properly to all 5G networks, regardless of the hardware they’re sporting.

iOS and Android are still at the start of the 5G era, so there’s every prospect that Apple, Google, and their carrier partners will address the current indicators, bandwidth challenges, and international issues over the next year or two, making 5G less confusing (and hopefully more performant) for users. Based on past class action lawsuits, my suspicion is that Apple’s retention of a “5G” icon regardless of actual use of the 5G connection may rile up some users and their attorneys — say nothing of the 4G-like performance of some low band 5G connections — so it remains to be seen whether this practice continues over time, even if it leads to less 4G/5G icon flipping at the top of the screen.

The biggest positive takeaway from the current state of both mobile operating systems is that users should expect to start having at least somewhat better experiences with nascent 5G networks: less concerns about 5G performance, even if it’s unimpressive, and better use of legitimate 5G connections to deliver next-generation service quality. Real change will depend upon future improvements on the carrier side, but at least it’s clear that businesses and end users will be able to count on their devices when the networks are ready.