For a franchise that's known for being cute and kid friendly, Pokemon has a surprising amount of creatures that are truly frightening. There's the zombified Parasect, the mind-controlling Hypno, and the grotesque land squid Malamar. And that's not even talking about all of the Ghost-type Pokemon!

Because of this, it only makes sense that a lot of these Pokemon can be compared to some of the most scream-inducing characters ever seen in cinema. From the early 1900s to today, here are some horrifying horror icons and their perfect Pokemon partners. 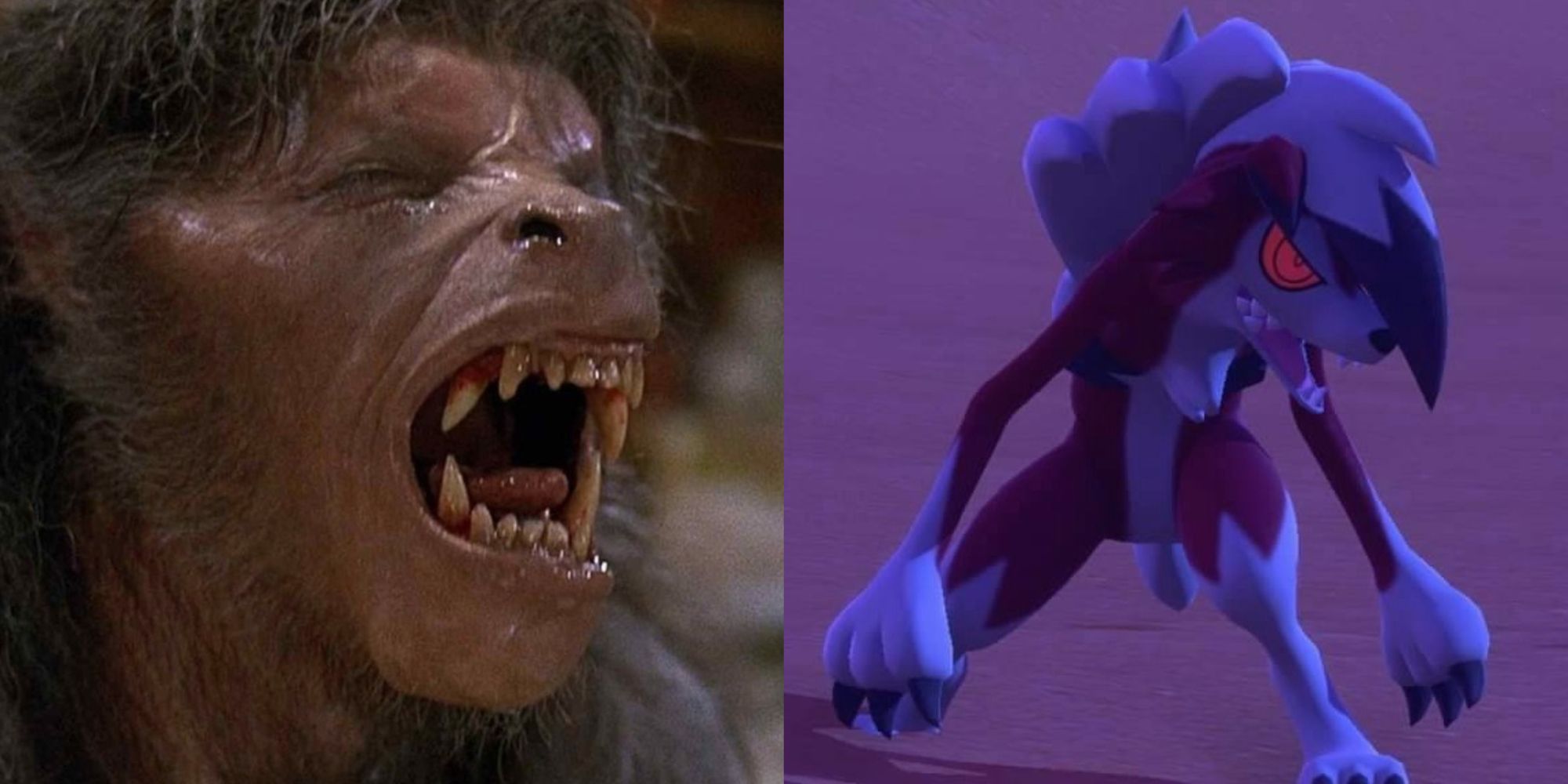 Let's start with something obvious. There are three forms of Lycanroc: Dusk, Midday, and Midnight. While the Dusk and Midday forms look like traditional wolves, the Midnight form clearly repreasents the classic werewolf.

But which werewolf? While there are plenty out there, it seems that Midnight Lycanroc looks most similar to the ones seen in An American Werewolf In London. This film is iconic and features the most terrifying werewolves in cinema, whether they are mid transformation or in their final form. And both match up perfectly with Midnight Lycanroc. 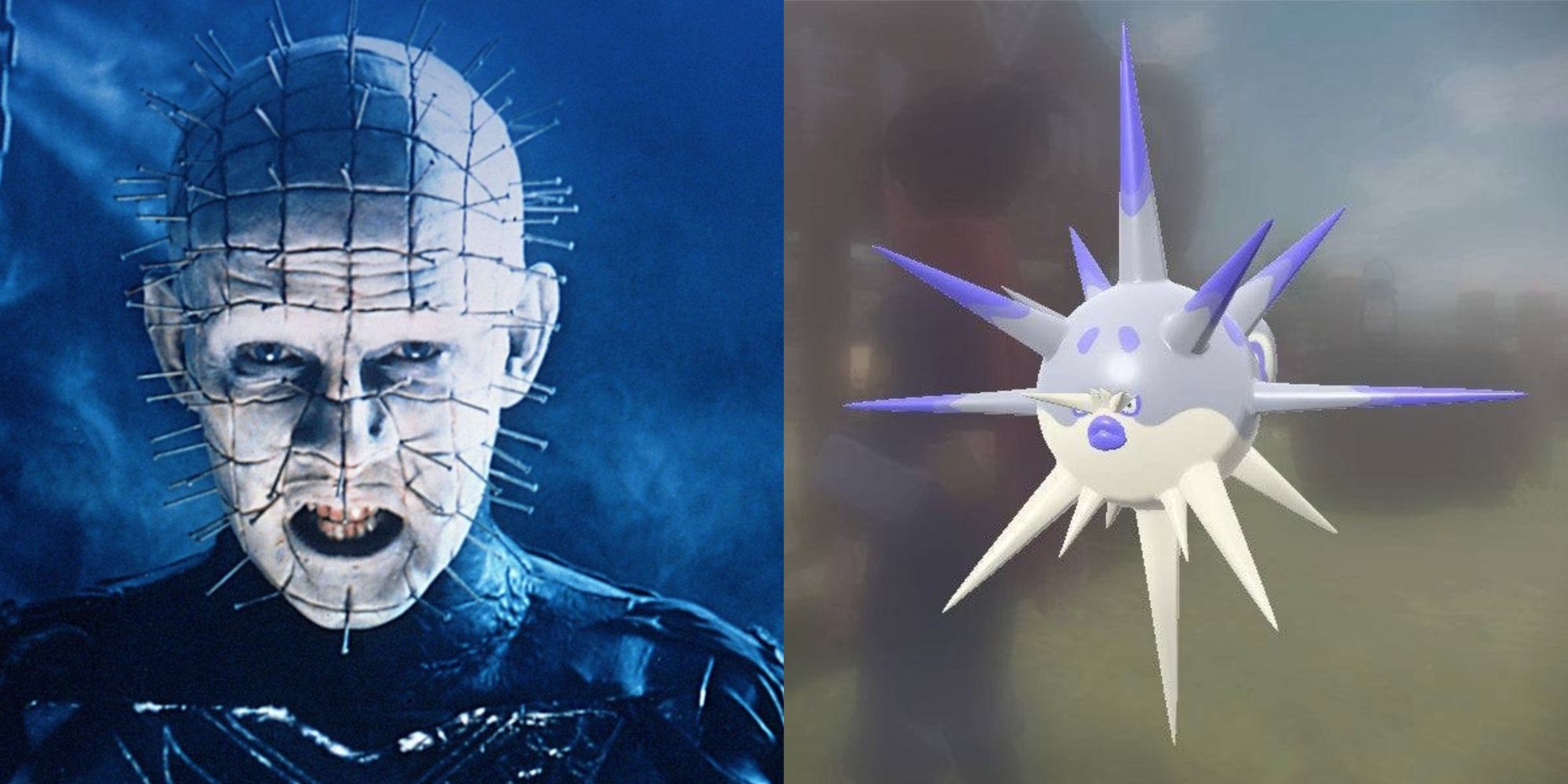 The Hell Priest from the Hellraiser films, Pinhead is the leader of the Cenobites and takes pleasure in inflicting pain and suffering on others. Meanwhile, Overqwil is a pufferfish known as the "sea fiend" that is incredibly aggressive and feeds on poison.

These two may not have a lot in common, with the biggest similarity being how silly their names are, but they look almost identical. This is especially true when you look at a shiny Overqwil since it has a very similar color theme to Pinhead. So while the intention behind these creatures are different, their aesthetics earn them a place on this list. 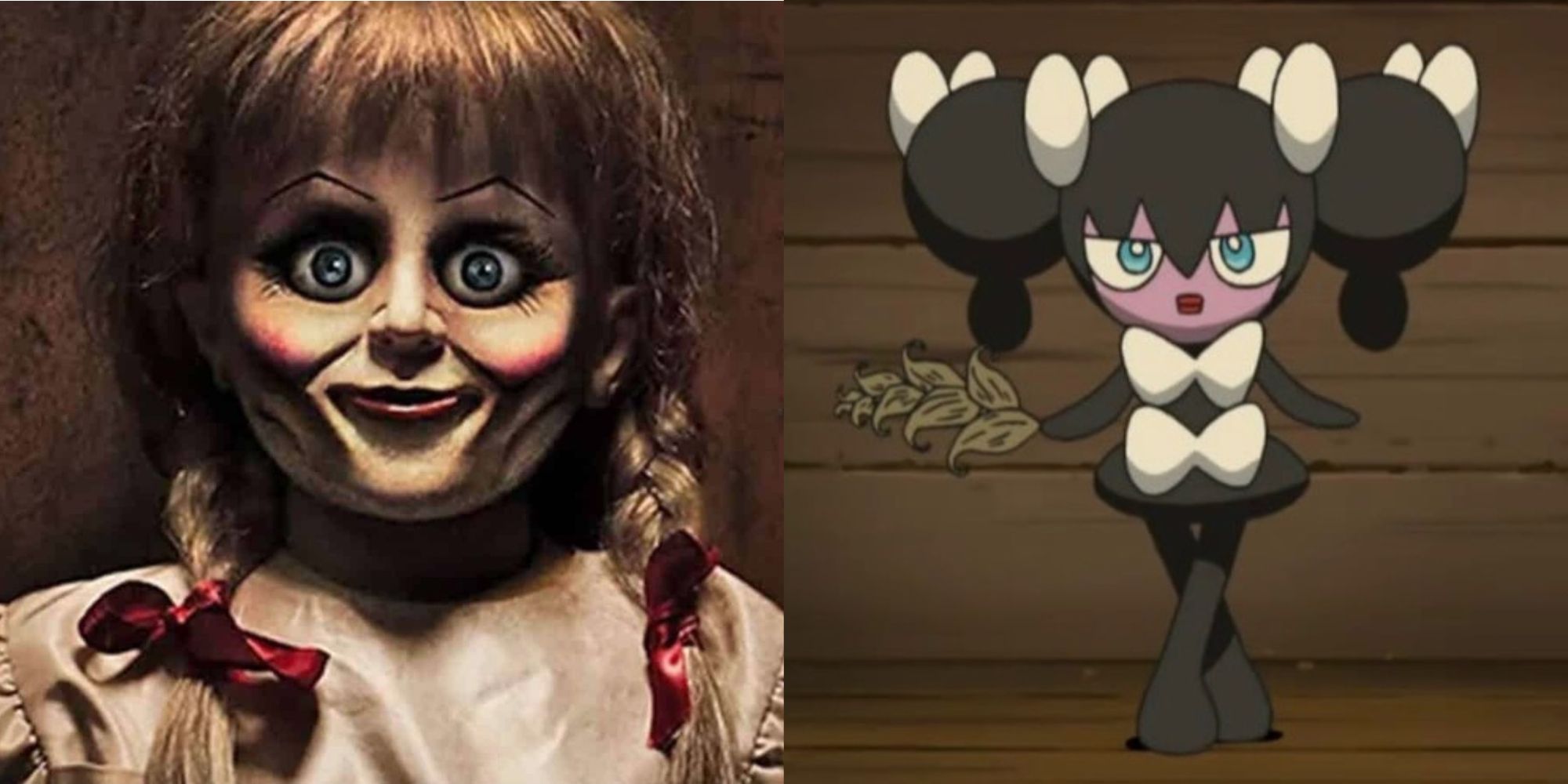 Originally a Raggedy Ann doll in real life, Annabelle is in movies as a Victorian china doll. She is possessed by a satanic entity that can move things without touching them and manipulate people into doing her bidding.

Annabelle's appearance matches up perfectly with Gothorita, a Pokemon based on Lolita fashion. However, the similarities don't stop there. As a Psychic-type, Gothorita is also able to move objects with its mind and is noted for using hypnosis to manipulate children into being its friend. They may seem like innocent toys at first glance, but both Annabelle and Gothorita are terrifying and controlling monsters. 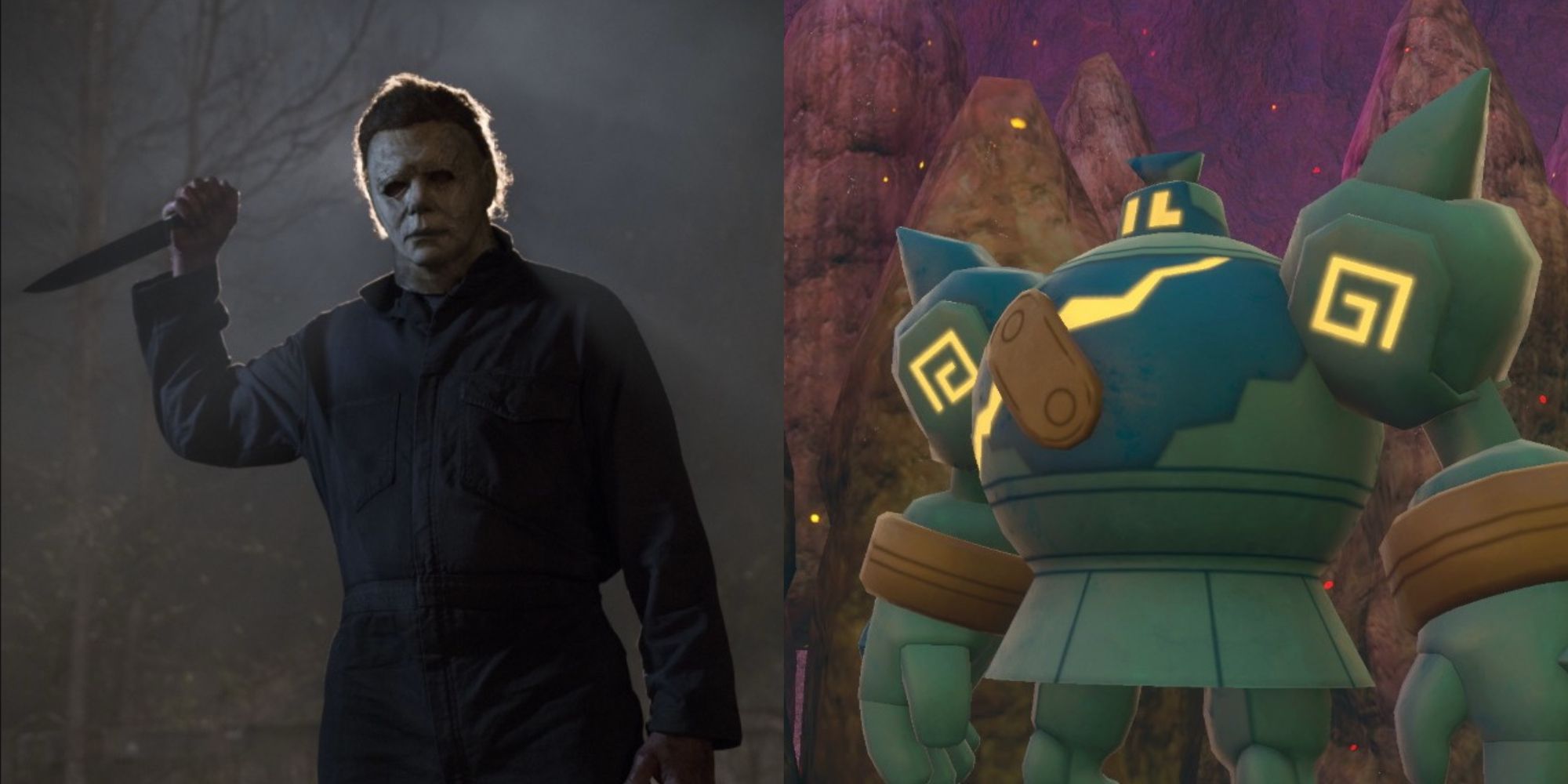 The original Halloween created the slasher genre as we know it today and a lot of that is because of the terrifying Michael Myers. His slow movement, massive strength, and lack of emotion make him one of the scariest horror figures of all time.

Golurk matches these traits perfectly. While it doesn't carry a kitchen knife, Golurk still has an intimidating presence, mainly due to its gigantic and stoic appearance. They even have similar coloring, with Myers' blue jumpsuit and Golurk's blue armor. The biggest difference lies in Golurk's ability to fly through the sky at mach speed, although that would justify how Michael is able to get from place to place so quickly. 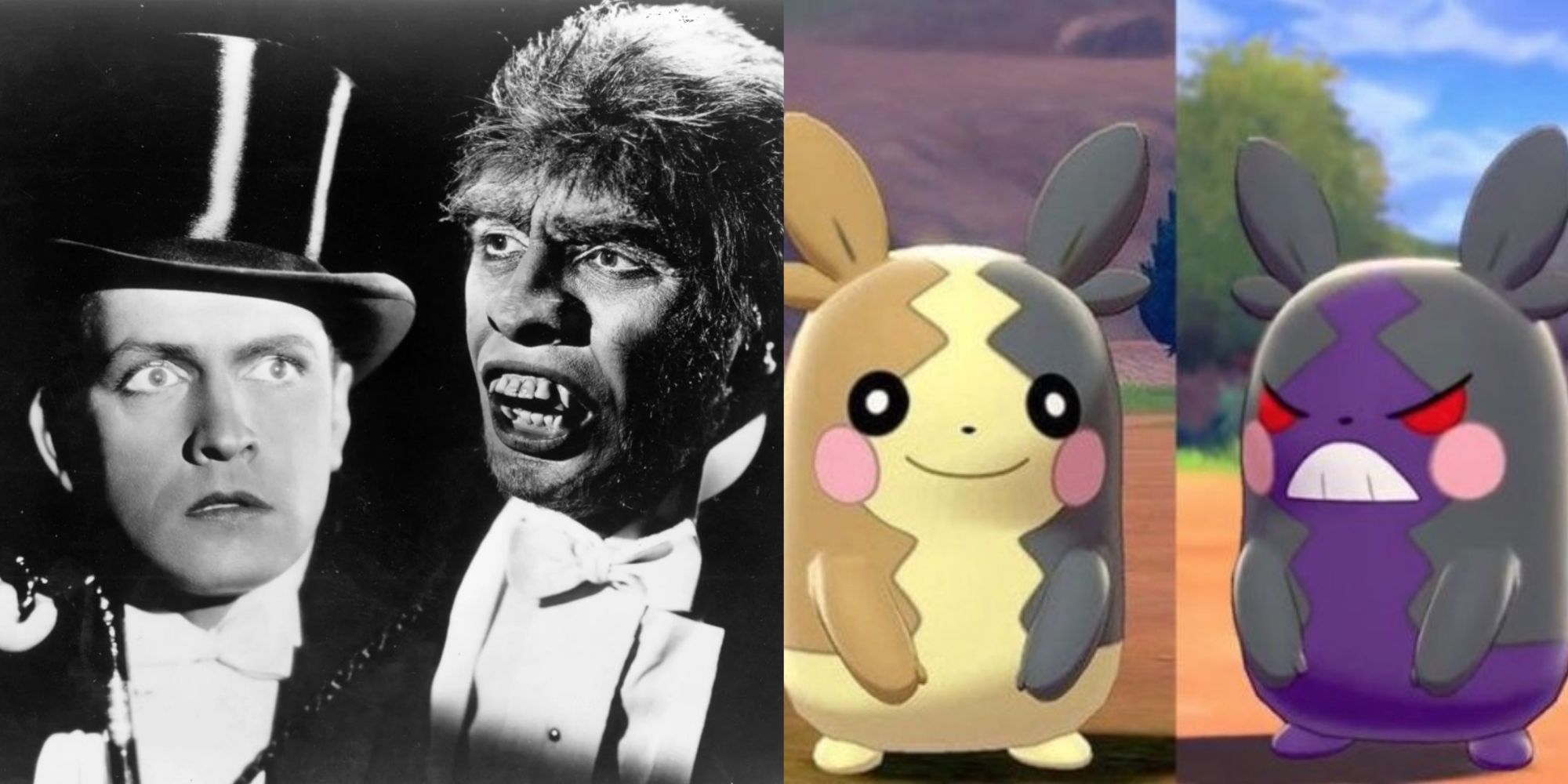 One of the lesser-appreciated horror stories is that of Dr. Jekyll and Mr. Hyde. Jekyll creates a serum meant to remove the evil from within a person, but it instead awakens Mr. Edward Hyde who is evil incarnate. This story has led to many movies and even a Broadway musical.

While Morpeko may not capture this idea perfectly, the transformation is incredibly similar: going from an adorable hamster to an angry Dark-type every other turn. Instead of a serum, this transformation is caused by hunger and the Dark-type form is called "Hangry Mode". It does make you wonder if the whole Mr. Hyde thing can be solved with a Snickers. 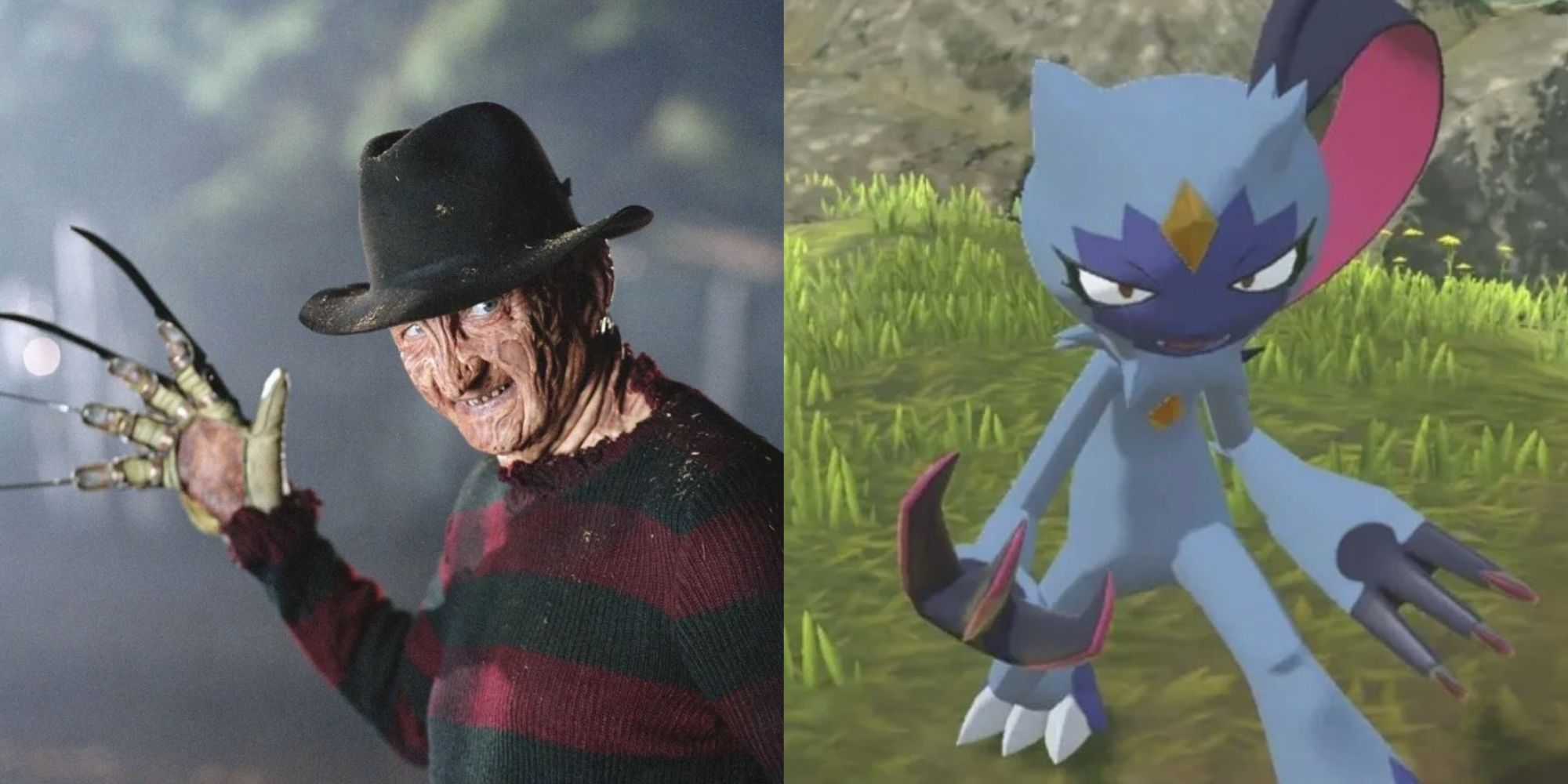 With his burnt face, fedora, striped sweater, and bladed glove, Freddy Krueger is easily one of the best-looking villains in all of horror. Add on the ability to infiltrate people's dreams and kill them in their sleep, and he is also one of the most powerful.

Sneasler perfectly encapsulates the strength and speed that Freddy is known of. Sneasler also has a purple pattern on its face resembling Freddy's burnt skin, especially in its shiny form. But what really seals the deal is the claws, which are much more prominent with Sneasler than Weavile or either version of Sneasel. 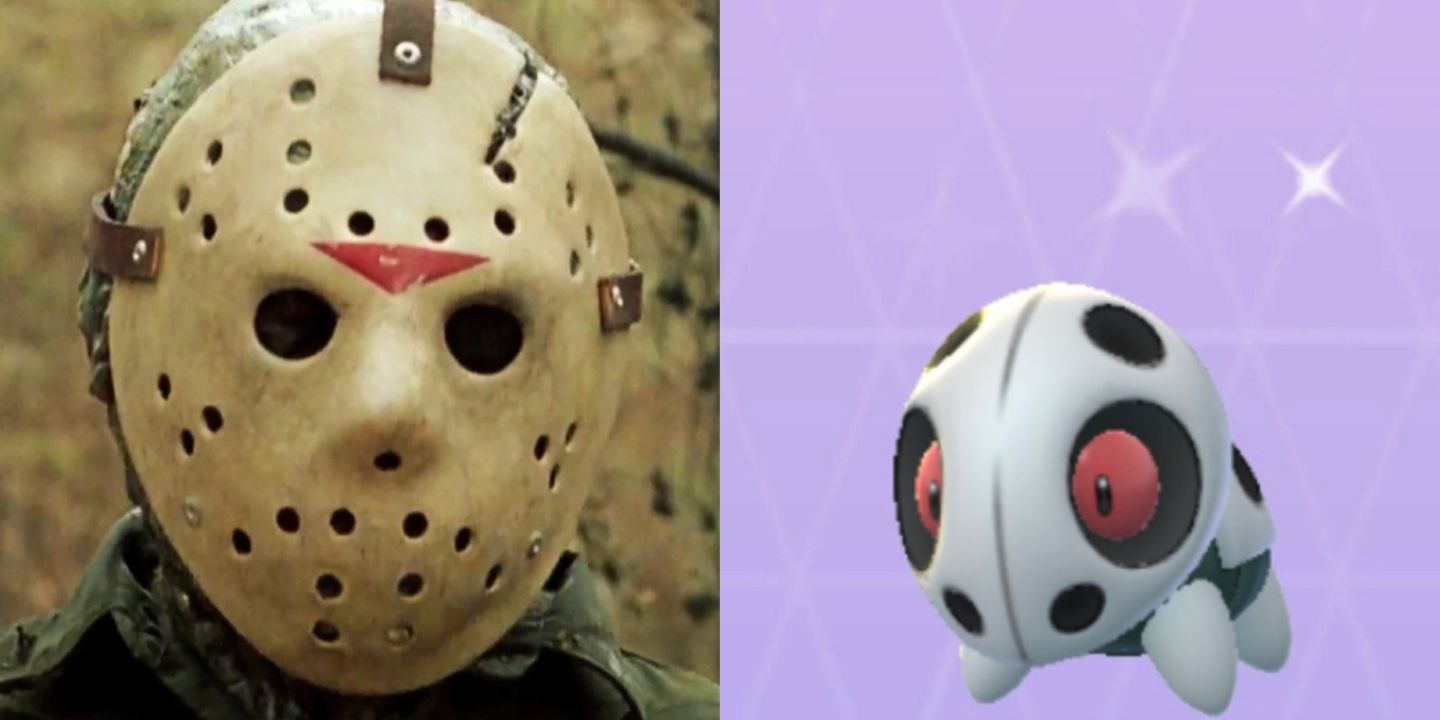 Friday The 13th did for hockey masks and summer camps what Jaws did for the ocean, and that is all due to Jason Voorhees, even though he didn't appear in the first movie. A big brute with a machete, Jason is known for his unflinching brutality and body count. And the same can be said for Aron.

First, Aron already looks like it's wearing that signature hockey mask. Second of all, Aron has one of the most brutal strategies in Pokemon. Have it at level one, make sure it has the Sturdy ability and is also holding a Shell Bell. Teach it Endeavor, Toxic, Sandstorm, and Metal Burst. Now, Aron is a killing machine that can eliminate almost any opponent with ease. It's no wonder that both Jason and Aron strike FEAR in those facing them. 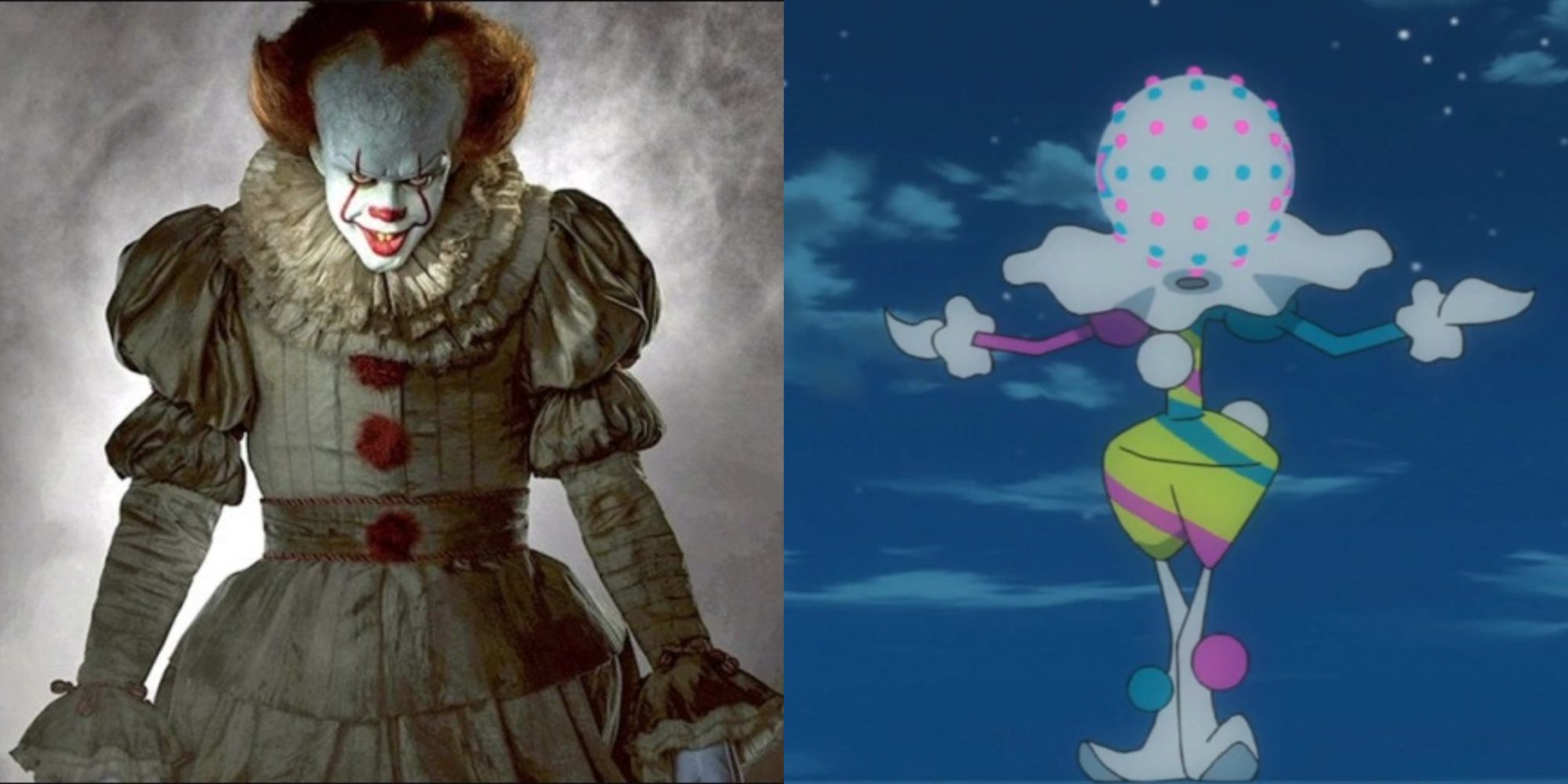 People have always been afraid of clowns, but it has only gotten worse since the release of It Chapter 1 and 2 in 2017 and 2019 respectively. This brought Pennywise, an interdimensional entity in the form of a clown that devours children every 27 years, back into mainstream consciousness. What makes Pennywise especially scary is the inhuman qualities to it, like the eyes and gigantic head.

This is also what makes Blacepholon so uneasy-looking. It is clearly a clown, but has no face at all and can even remove its own head. Doing this turns it into a balloon-like bomb that blows up in a way that is actually reminiscent of Pennywise's obsession with balloons. For both of these monsters, the other-worldly appearance combined with something familiar and innocent makes for something you won't soon forget. 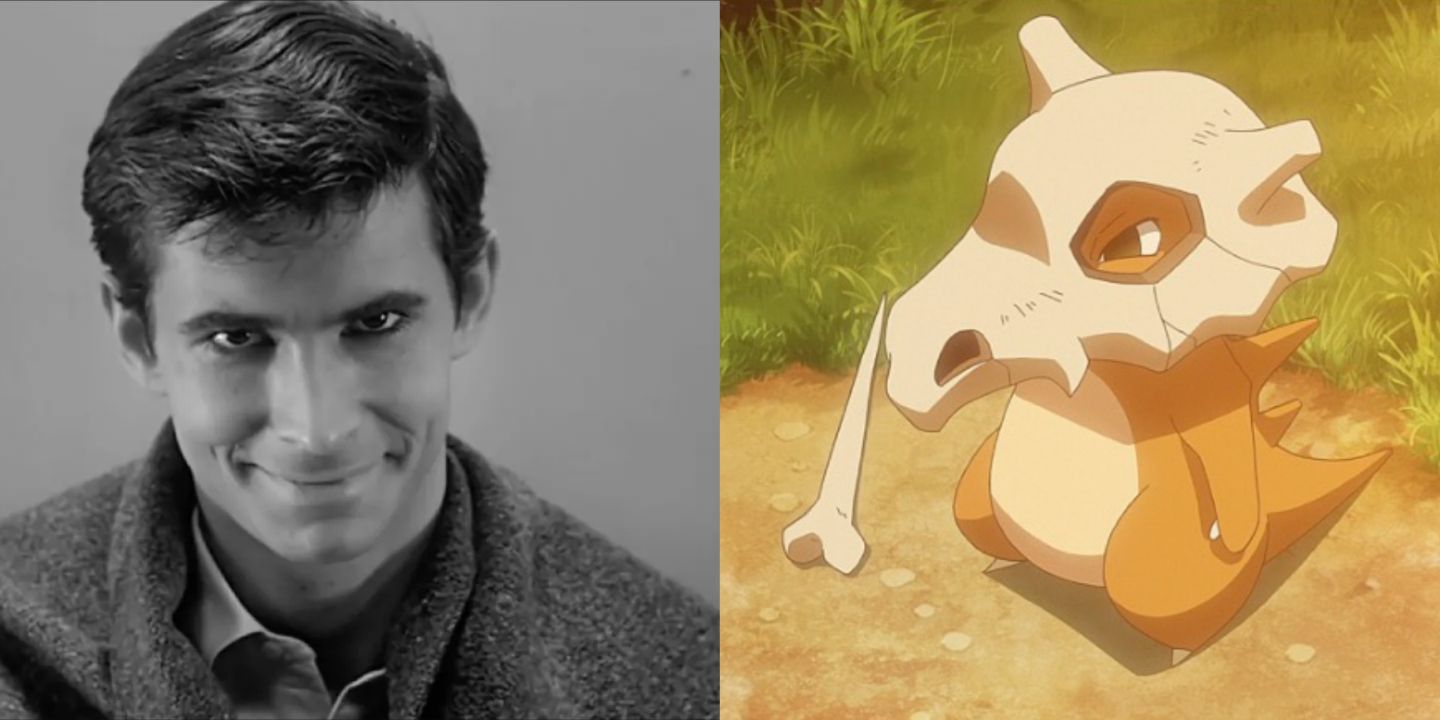 Norman Bates from Psycho is one of the scariest film characters ever since he seems so normal at first. However, once you get to the climax of the film, you meet Norman's dead mother and see him dressed in her clothes since he developed a split personality based on her. You may see where this is going…

The only Pokemon who has that same "attachement" to their mom is Cubone. See that skull on its head? That's its mother's skull. Yeah. Creepy. However, Cubone is seen in a bit more positive light than Norman Bates as, once it comes to terms with its mother's death, Cubone will evolve into Marowak. It looks like Norman will never evolve, though. 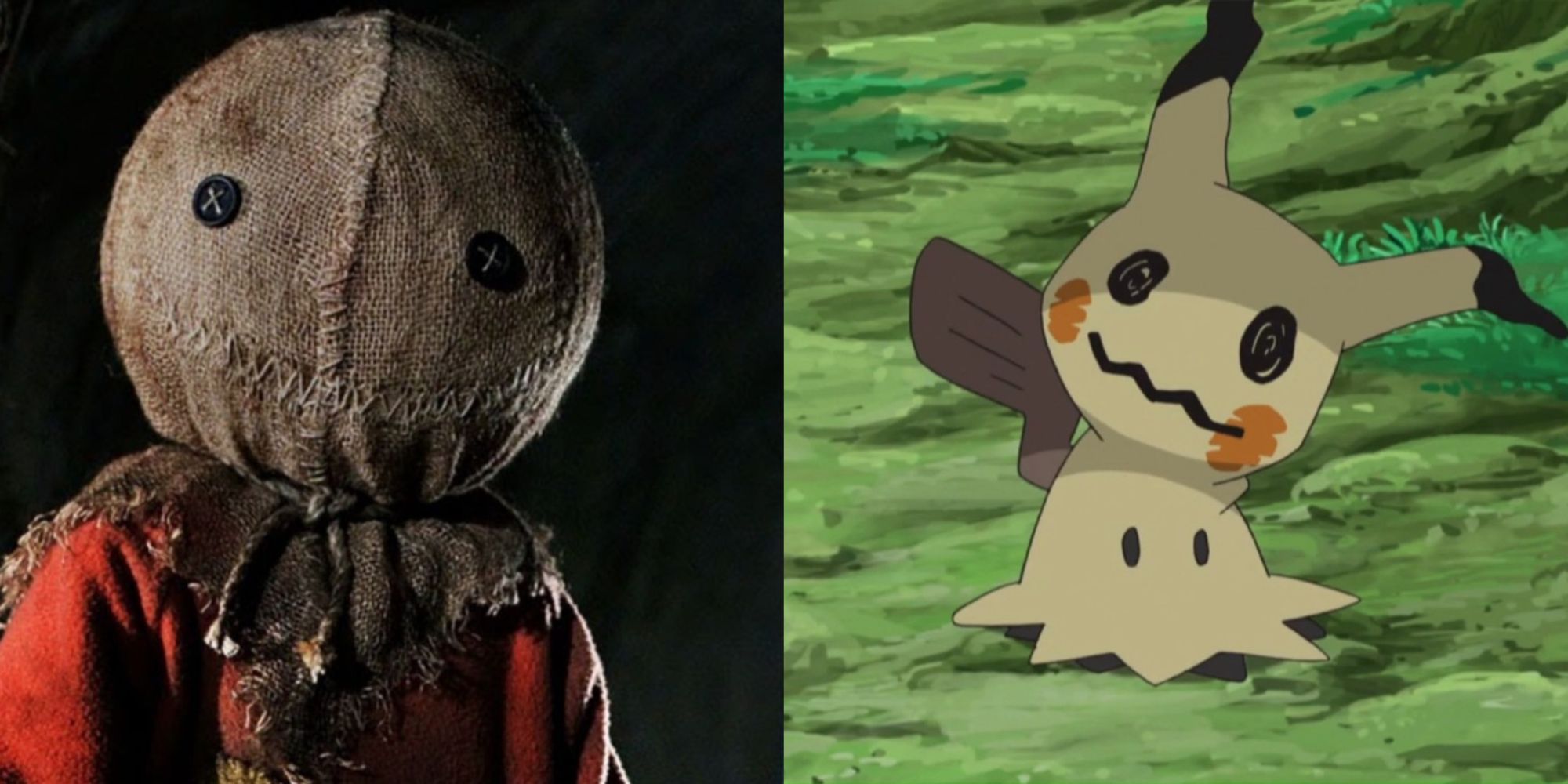 Originally, Mimikyu was going to be paired with Leatherface since they're both known for their costume-making abilities. But then another more recent horror icon came up and the debate was settled. Mimikyu and Sam from Trick 'r Treat are a perfect pair.

Both are recognized for seemingly hand-made costumes that hide truly grotesque appearances underneath. Both of them are also not known to be completely evil. Sam chooses to punish people who don't respect Halloween, but will show mercy if they change their minds. Meanwhile, Mimikyu makes itself look like Pikachu because it just wants to be loved. Sam and Mimikyu's combination of creepiness and adorability make them a perfect pair.