Pokemon have some truly unique abilities. After all, with rodents that can shoot lightning from their tails, there's truly no limit to what these creatures are capable of. However, when compared to the world of My Hero Academia, these creatures are quite tame.

In a world full of super-powered humans, animals with the ability to manipulate the elements aren't all that strange. In fact, if these worlds were to combine, it wouldn't be strange to see the heroes partner with Pokemon for their hero work. With this in mind, here are a few hero and Pokemon pairings that we might see in such a world. 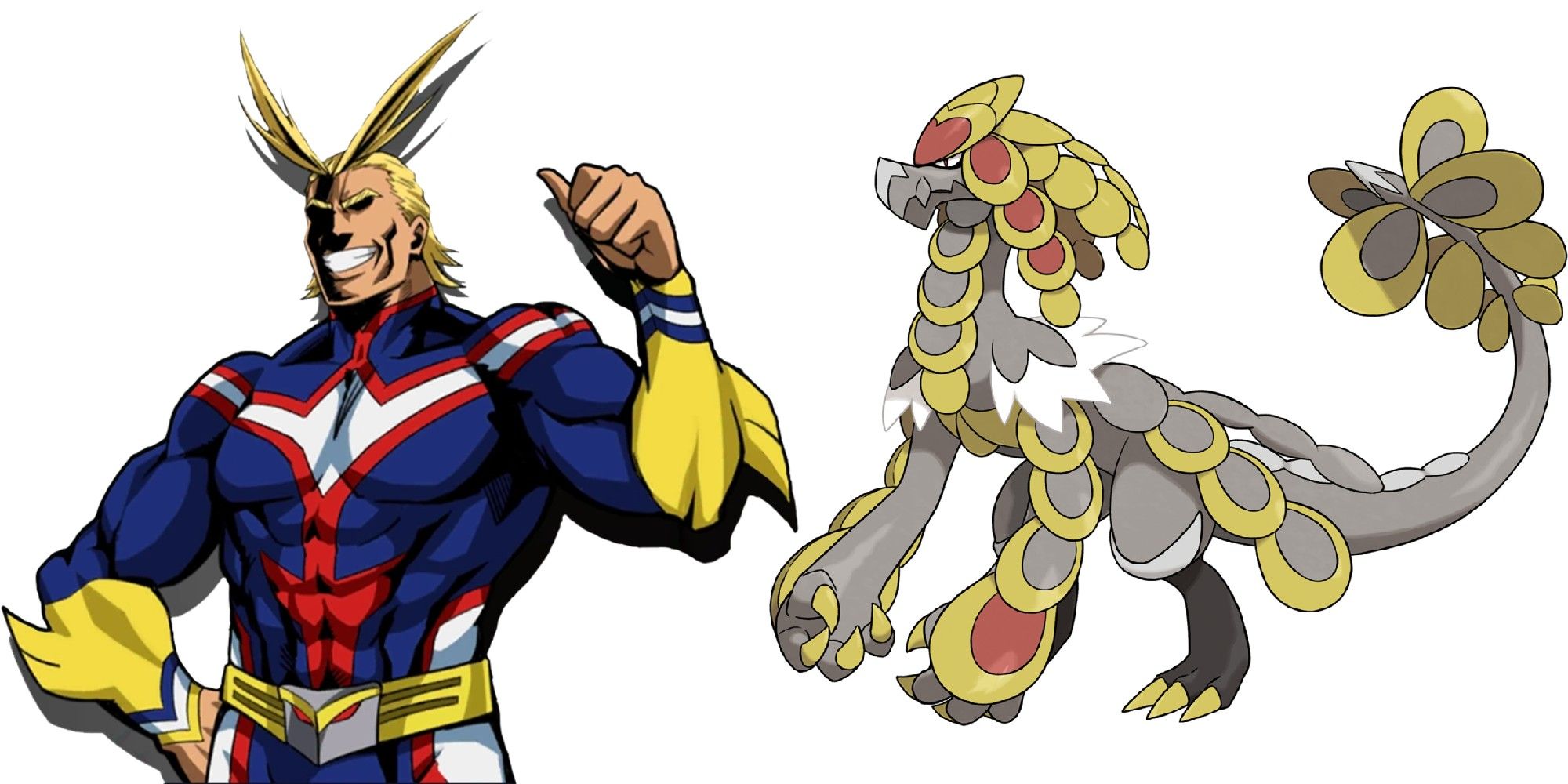 Being the "Symbol of Peace", All Might would require a Pokemon that could match him in power. The obvious choice would be a Pokemon like Machamp who is one of the most physically powerful Pokemon in existence, but All Might is more than just strength. He's a hero. A guardian who protects the weak and strives to drive off the forces of evil and there is one Pokemon that fits these criteria.

Kommo-o, while not as visibly bulky as Machamp, is just as strong. Its scales allow it to whether even the most powerful attacks, and it's said that its mere presence sends weak and cowardly opponents running. While its dragon-type attacks are unlike anything that All Might has in his arsenal, Kommo-o's temperament is a perfect match. 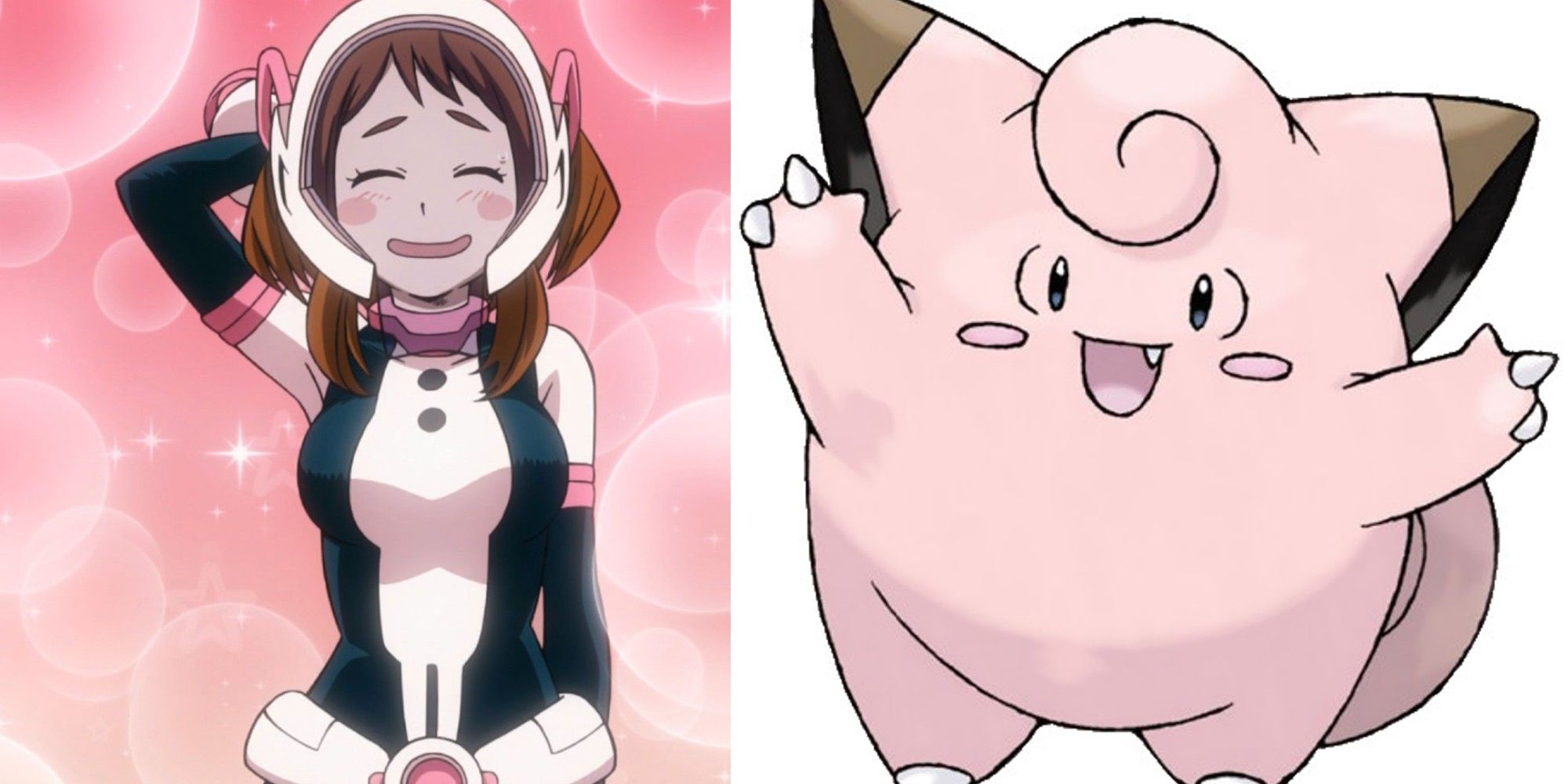 There aren't many Pokemon out there than can manipulate gravity in the same manner that Uravity can. As such, the best way to choose a Pokemon for the Zero-Gravity Quirk user is to match her costume. Seeing as she has a space theme, there's only one Pokemon that fits.

While there are a few Pokemon with extraterrestrial origins, Clefairy's the only one that would make a good fit for Uravity. Not only can it learn the move Gravity, an integral part of being partnered with the gravity user, but its bubbly personality and kindness are perfect for a person like Uravity. Clefairy is also surprisingly powerful and can catch people off guard, just like the hero. 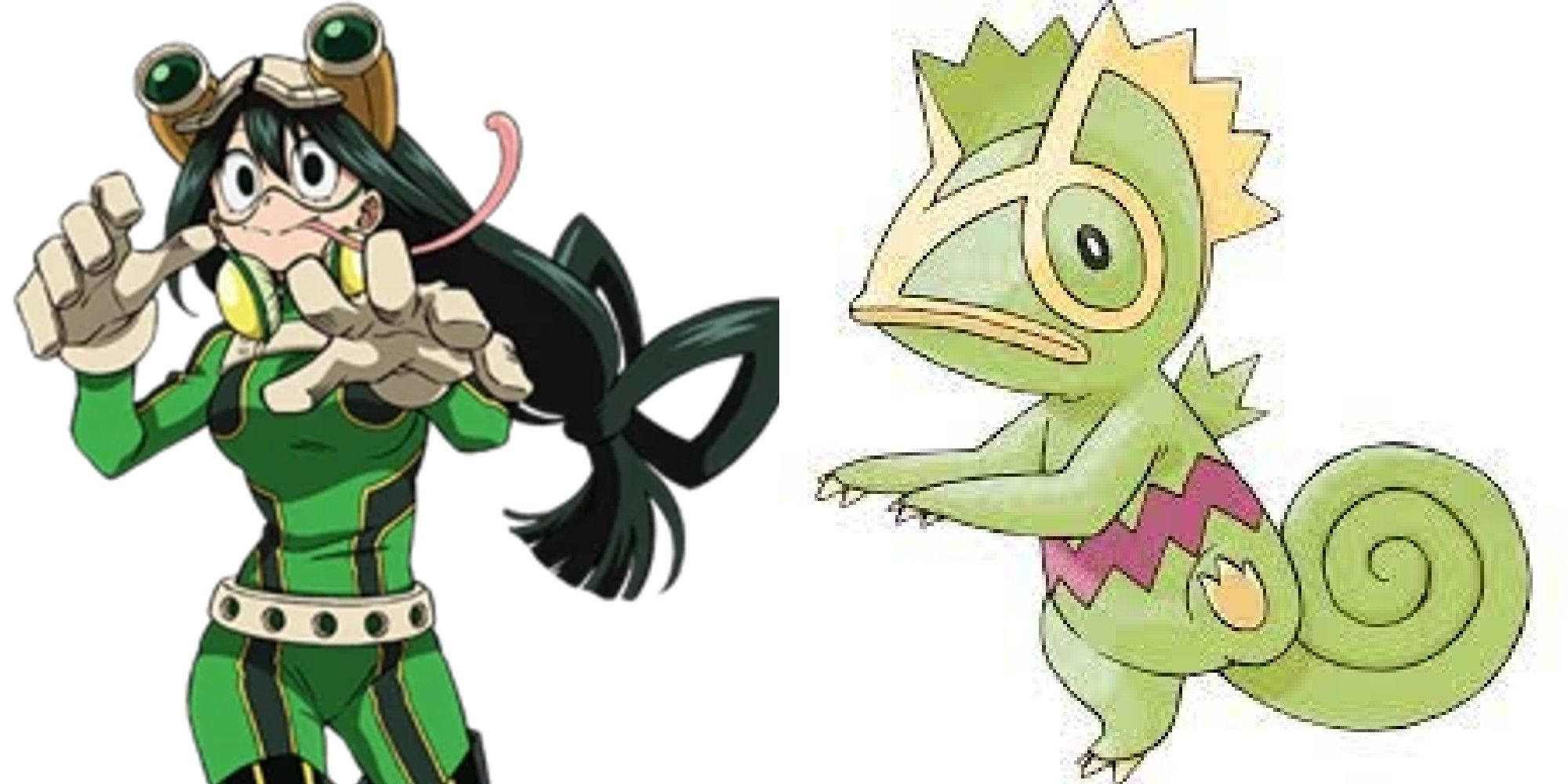 One would expect Froppy's ideal Pokemon partner would be a frog, or at least an amphibian. However, none of the frog Pokemon truly match the Rainy Season Hero. Sure, the Poliwag line would fit with Froppy's water theme, but she doesn't attack with water herself. In fact, there's only one Pokemon that truly matches her, down to a T.

Kecleon, while not a frog, would be the perfect partner for Froppy. Both use camouflage to catch their opponents off guard before striking them with their tongues. Additionally, with Kecleon's abilities, it can change into a water type, giving it the ability to fight in water with its partner. 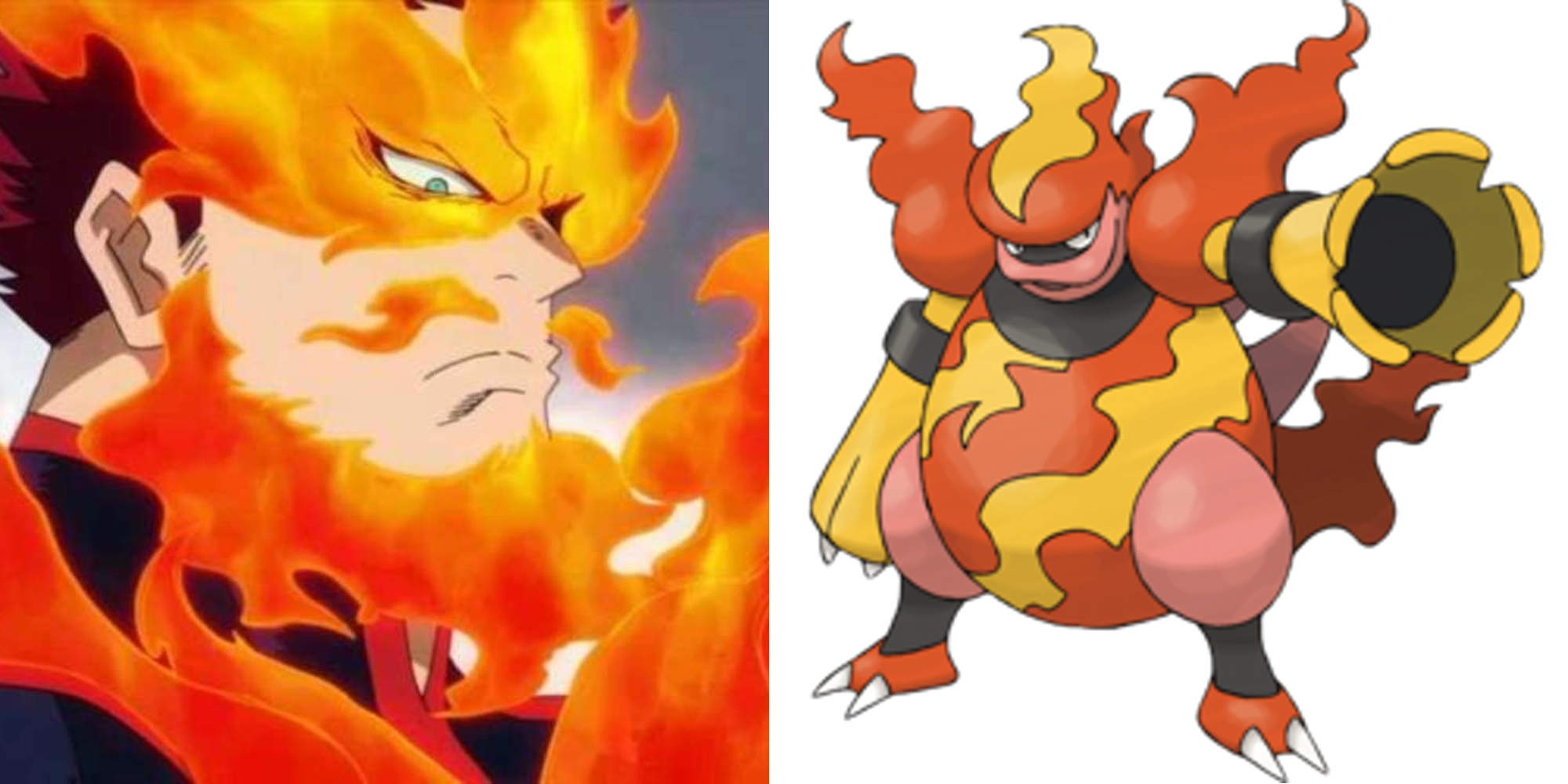 Endeavor is a hero that personifies fire. The sheer firepower that this hero possesses is unlike any other hero in the My Hero Academia universe. With flames strong enough to cut through buildings as if they were paper, the Pokemon paired with Endeavor would have to be able to match his intensity.

Out of all the fire-types in the Pokemon World, the one that exemplifies 'firepower' the most would have to be Magmortar. With the ability to shoot out fireballs that can exceed 3,000 degrees Fahrenheit, Magmortar can definitely match Endeavor's strength. 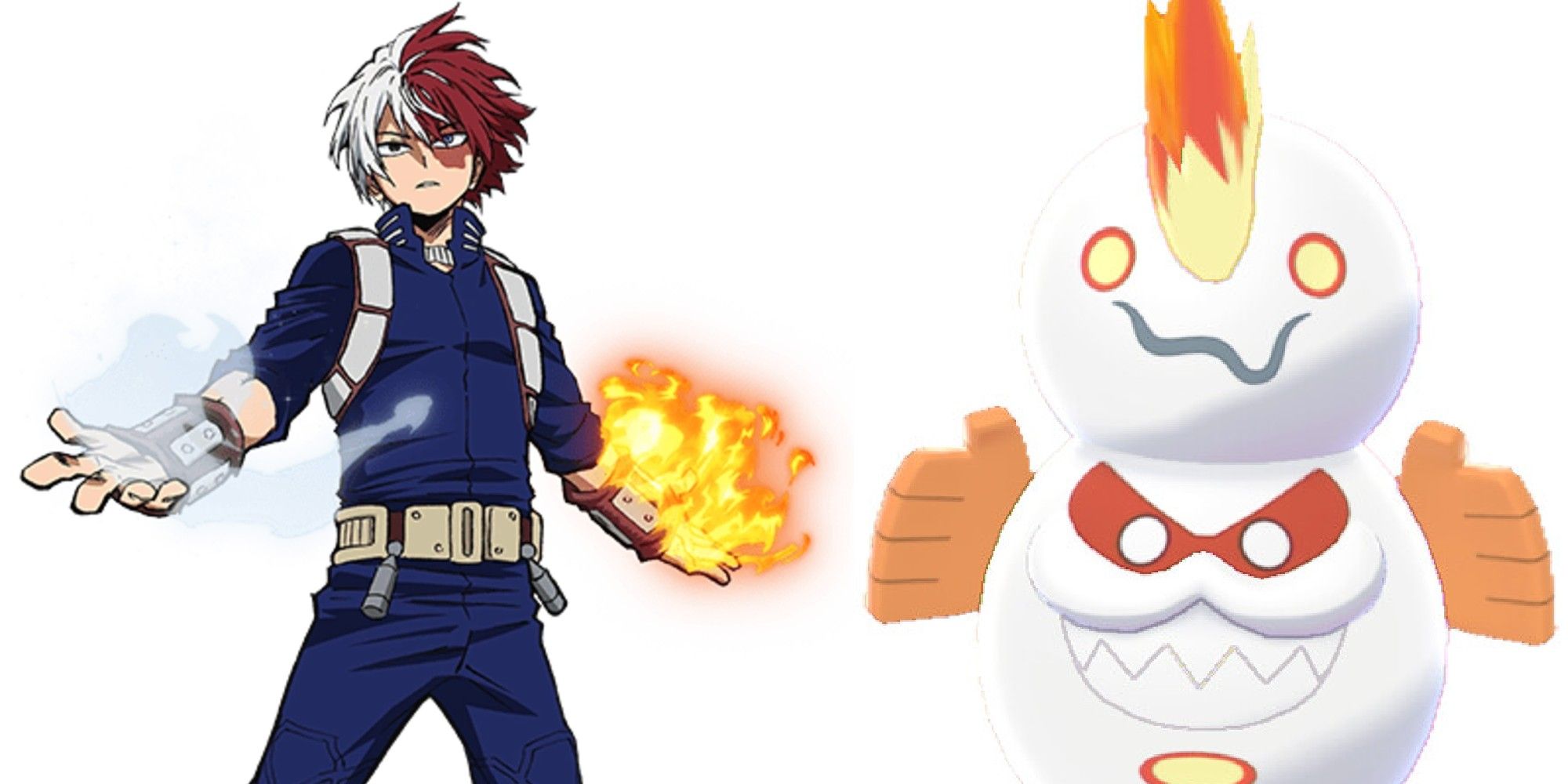 Finding a Pokemon that possesses the ability to manipulate both fire and ice is difficult. There are a few that can learn both types of moves, but none of them fit Shoto's aesthetic. The two forms of Vulpix would be a good pick for the son of Endeavor, but this list limits each character to one Pokemon. As such, Galarian Darmanitan is the best choice.

The Zen Charm Pokemon's burly appearance doesn't fit with the Half-Cold Half-Hot user, but its abilities do. As the only ice-type Pokemon that can use fire moves, save for Kyurem, Galarian Darmanitan is the only Pokemon that can match Shoto. Not to mention that its hidden ability, Zen Mode, is a perfect representation of Shoto accepting the fire aspect of his quirk and reaching a state of zen. 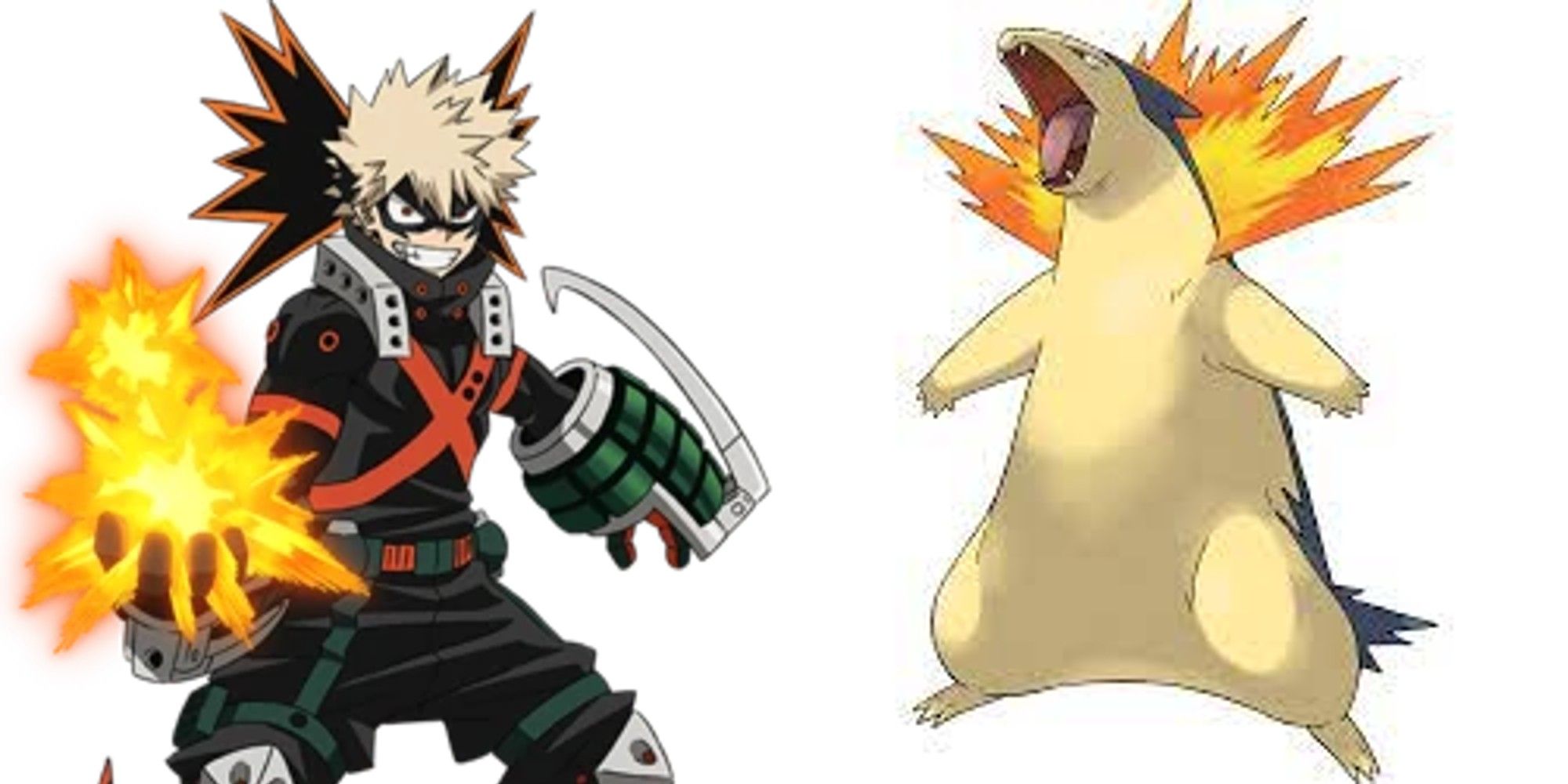 Typhlosion is a Pokemon known for its explosive attacks and temper. It's vicious when it attacks and is even stated to be capable of creating devastating explosions by rubbing its fur together. While it may seem odd to give a student a fully evolved Pokemon, with Dynamight's unyielding desire to be the best, there's no way he wouldn't train his Pokemon to its final stage. 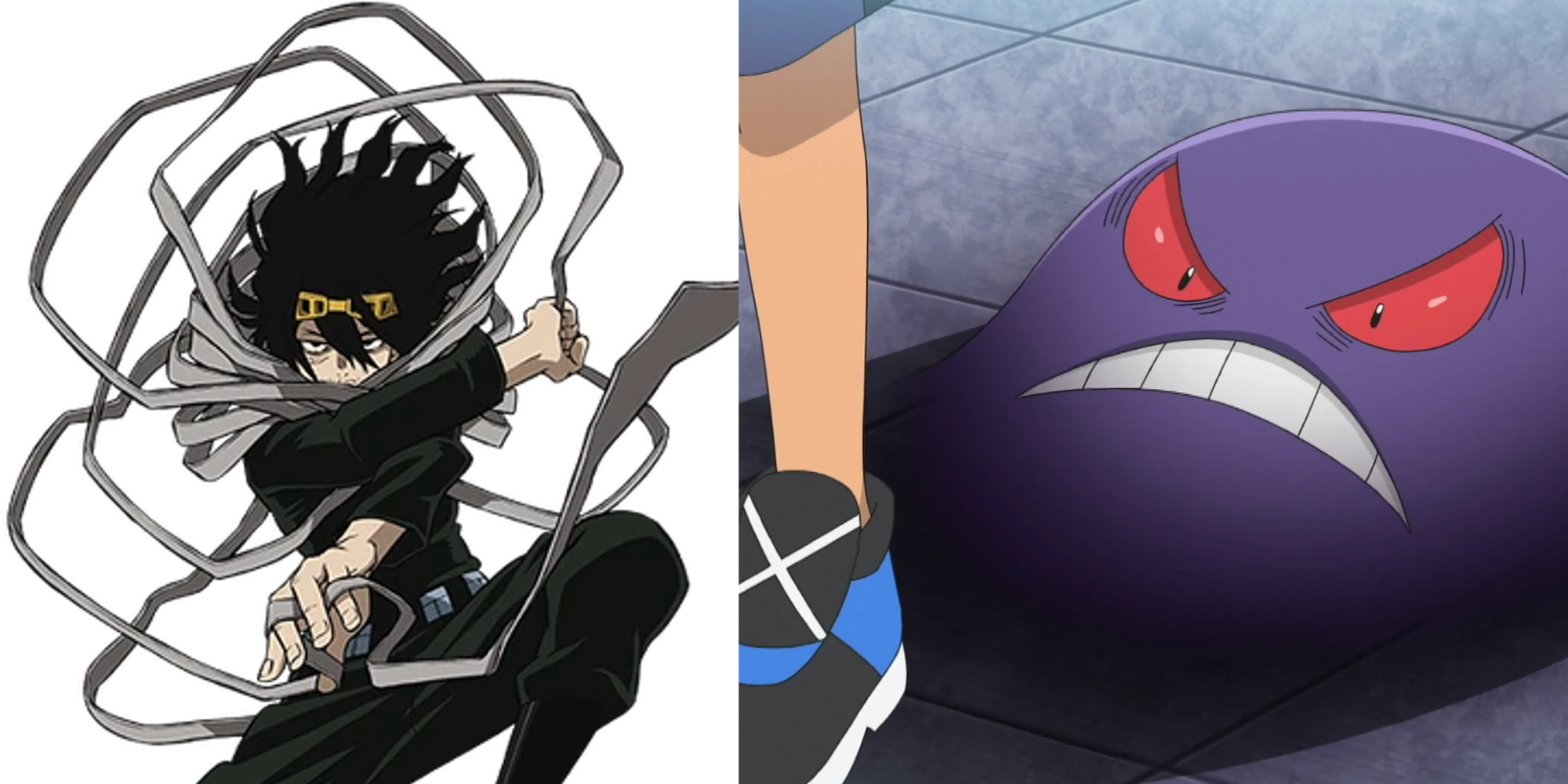 Eraserhead is a hero that thrives in the shadows. With a Quirk that doesn't grant him any physical enhancements, he often employs ambush tactics to catch villains off guard before evening the playing field by erasing their Quirks. Out of the numerous Pokemon, there really is only one option for this Underground Hero.

Despite its innate mischievousness, and the stereotypes surrounding it, Gengar shares many similarities with Eraserhead's fighting style. The ghost-type is well known for its tendency to hide in shadows before jumping out at its unsuspecting prey. It's also capable of learning Disable, a move that's practically the Pokemon version of the Erasure Quirk. 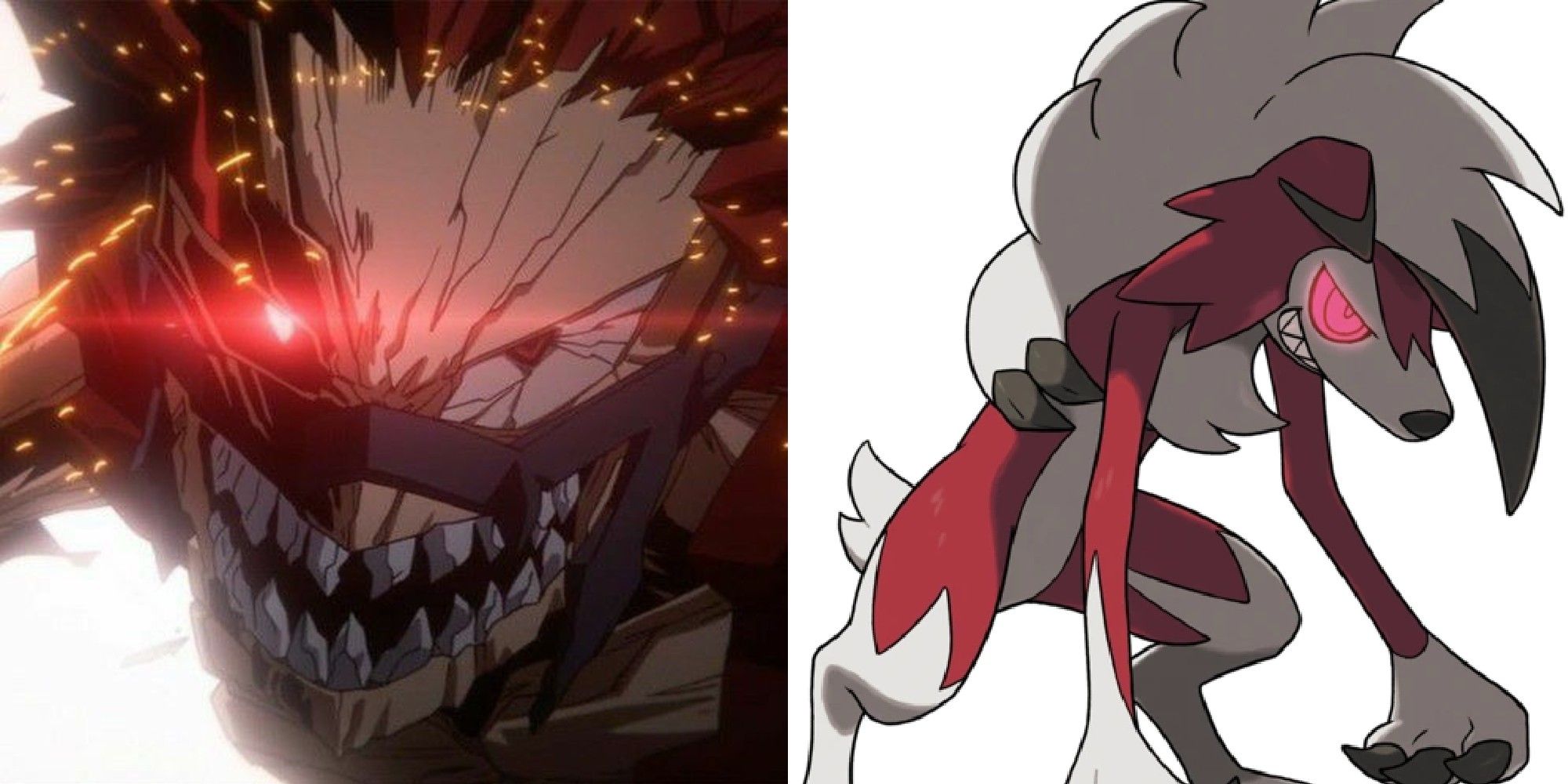 With Red Riot's Hardening Quirk, a rock-type would be a good fit. It would be easy to pair the Strudy Hero with an iconic rock-type like Geodude, but the Geodude line's rocky exterior doesn't match the exuberant and overly friendly personality of this hero in training, nor his unbreakable determination and intensity. Lycanroc, however, does match these traits.

Lycanroc's Midnight form, fits Red Riot better than any other Pokemon. They are known for their fierce loyalty, and they are notably bulky, especially its Midnight form. Not only is it bulkier than its other two forms, but its rather intimidating look fits with Red Riot's signature move: Unbreakable, which is just as terrifying. 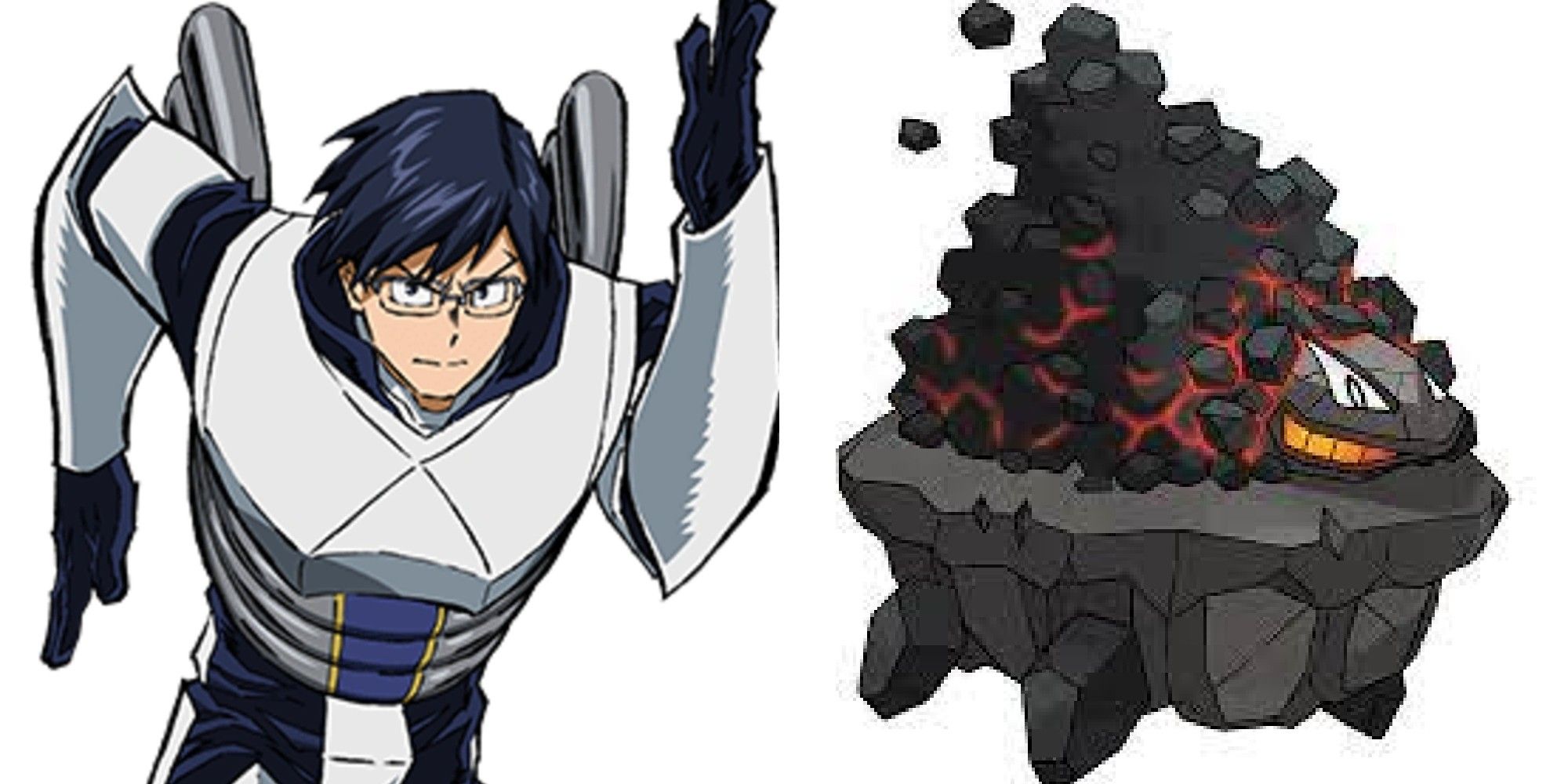 A rock-type may seem like an odd choice for a speedster like Ingenium. After all, rock type's tend to be slow and bulky, unlike the fast and agile hero. However, none of the speedy Pokemon match the disciplined and earnest Iida. Because of this, Carkol is the best fit for Ingenium.

Carkol, despite its type, is deceptively fast, which shouldn't be much of a surprise considering it's modeled after a cart. It doesn't have an engine or exhaust pipes like Ingenium, but its signature ability is surprisingly similar to Ingenium's Engine Quirk, as it requires orange juice as fuel. 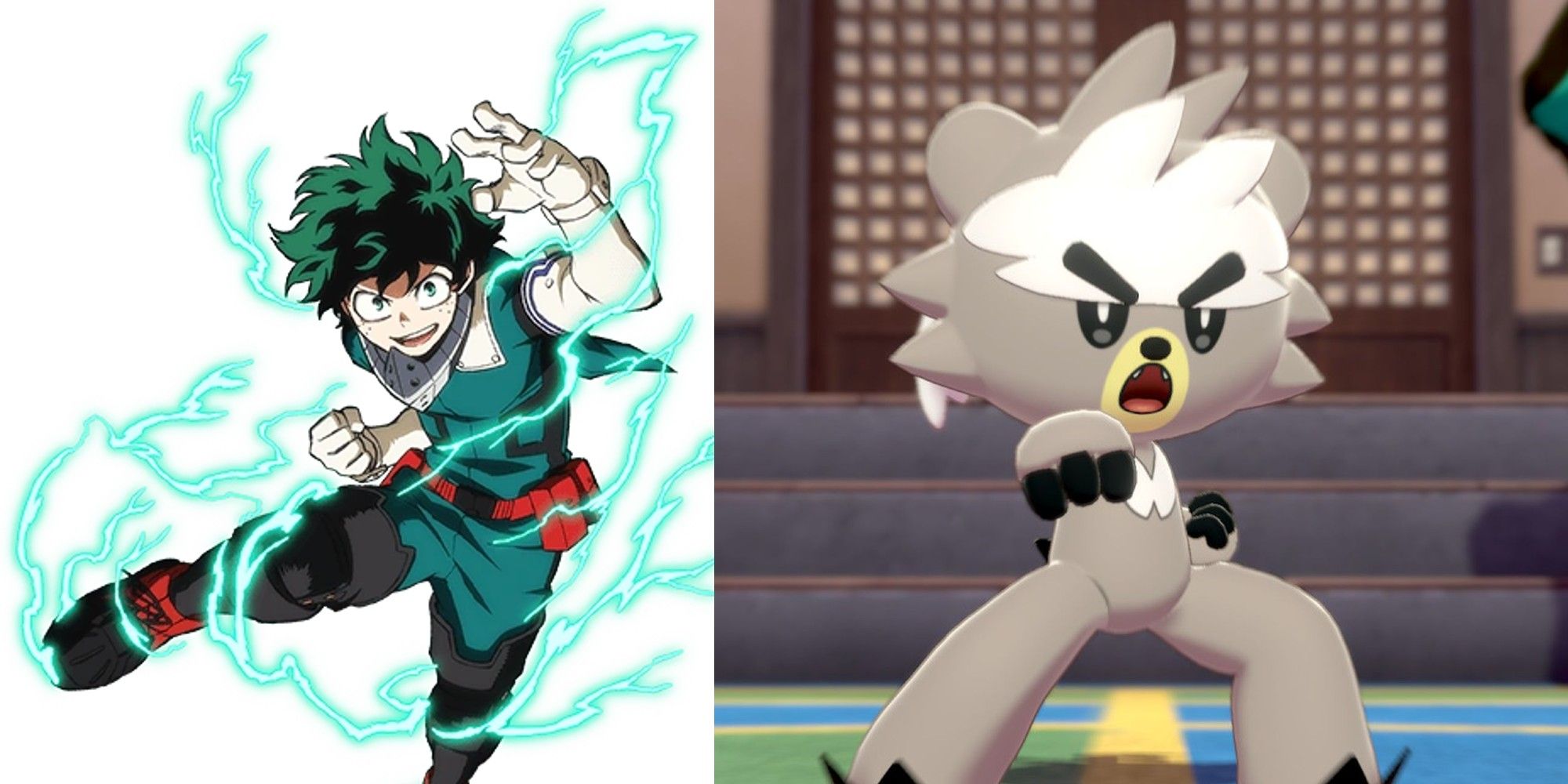 As All Mights successor, it would be easy to pair Deku up with a Jangmo-o or Hakamo-o, but those wouldn't be a proper fit. Despite being trained by All Might, Deku is very different from his idol. He has a drive to continuously improve himself through rigorous training, strategic planning, and an unshakable determination. As such, Kubfu is the perfect Pokemon for the ninth holder of One For All.

Much like Deku, Kubfu has an unquenchable desire to improve. Both push themselves to the limit to become even stronger and pairing the two of them together would only strengthen that desire. Additionally, it's said that Deku will one day surpass All Might in strength and Kubfu's final evolution, Urshifu, would do the same with Kommo-o in terms of stats.