Lego Star Wars: The Skywalker Saga is the biggest title in the Lego Star Wars series yet, covering the expansive storylines of all nine Star Wars films. Traveller's Tales, the developer of the Lego Star Wars games, has always seemed to approach the games quite often with a meta sense of humor. The newest game is no different, with more than enough Easter Eggs, references, and hidden aspects to keep players entertained as they battle through the galaxy.

With a wide range of content to immerse yourself in, it's quite easy to overlook some of the smaller aspects of the game, especially if you're mainly interested in replaying some of your favorite moments from the movie series. 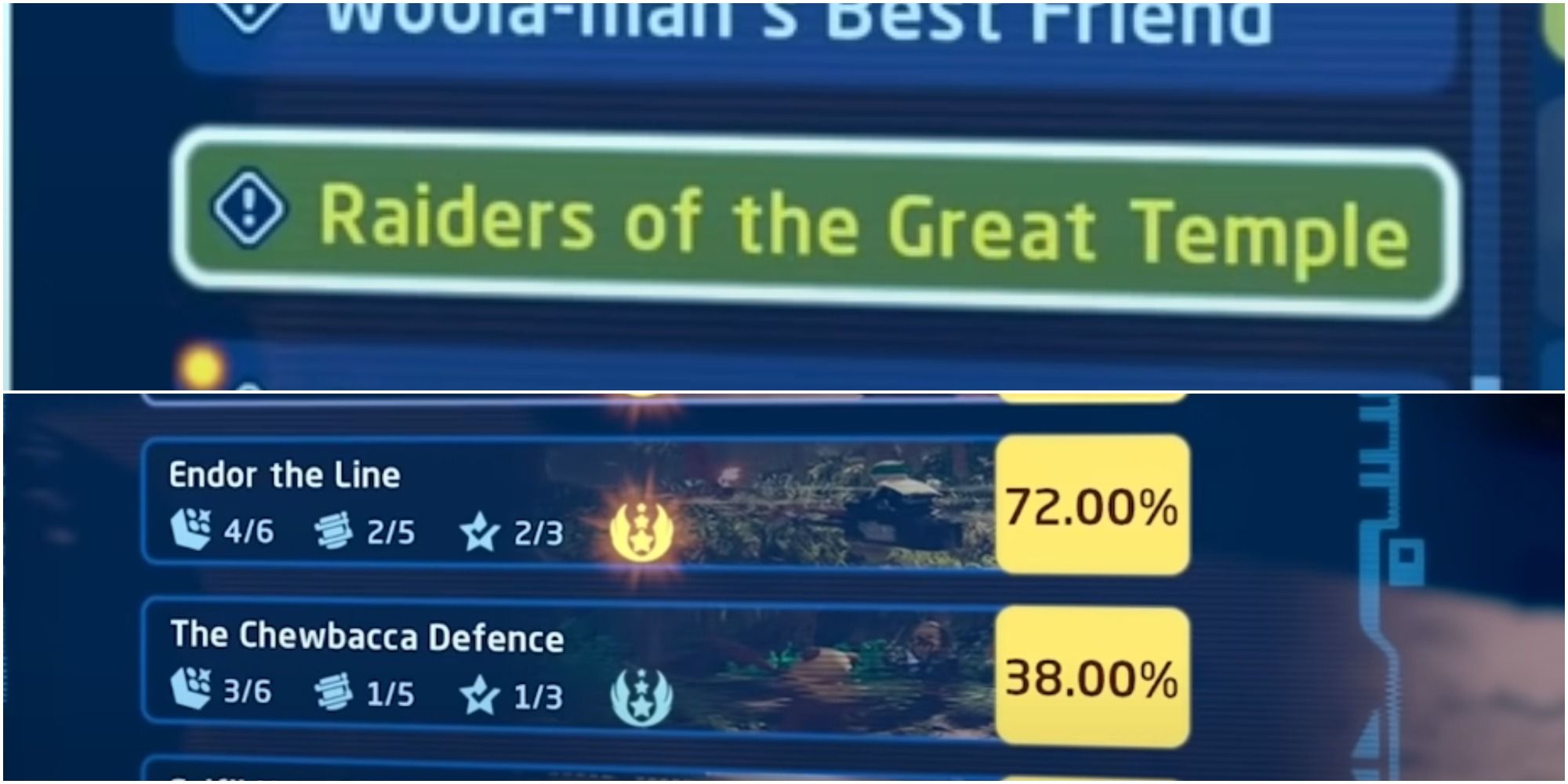 References to items of popular culture are always a win in games, however, can often go unnoticed by those who are not in the know. Despite Lego Star Wars: The Skywalker Saga having a PEGI 7 age rating, it's clear that Traveller's Tales has included references geared to the older fans of the Lego Star Wars series, meaning it's not just for kids.

A lot of the quest names contain references to some aspect of popular culture, or are at the very least are pun-related, resulting in something even beginners to the series can enjoy. The references range from TV Shows, with one of the best examples being 'Better Call Maul', to hit music tracks with names such as 'Don't Go Defacing Waterfalls'. 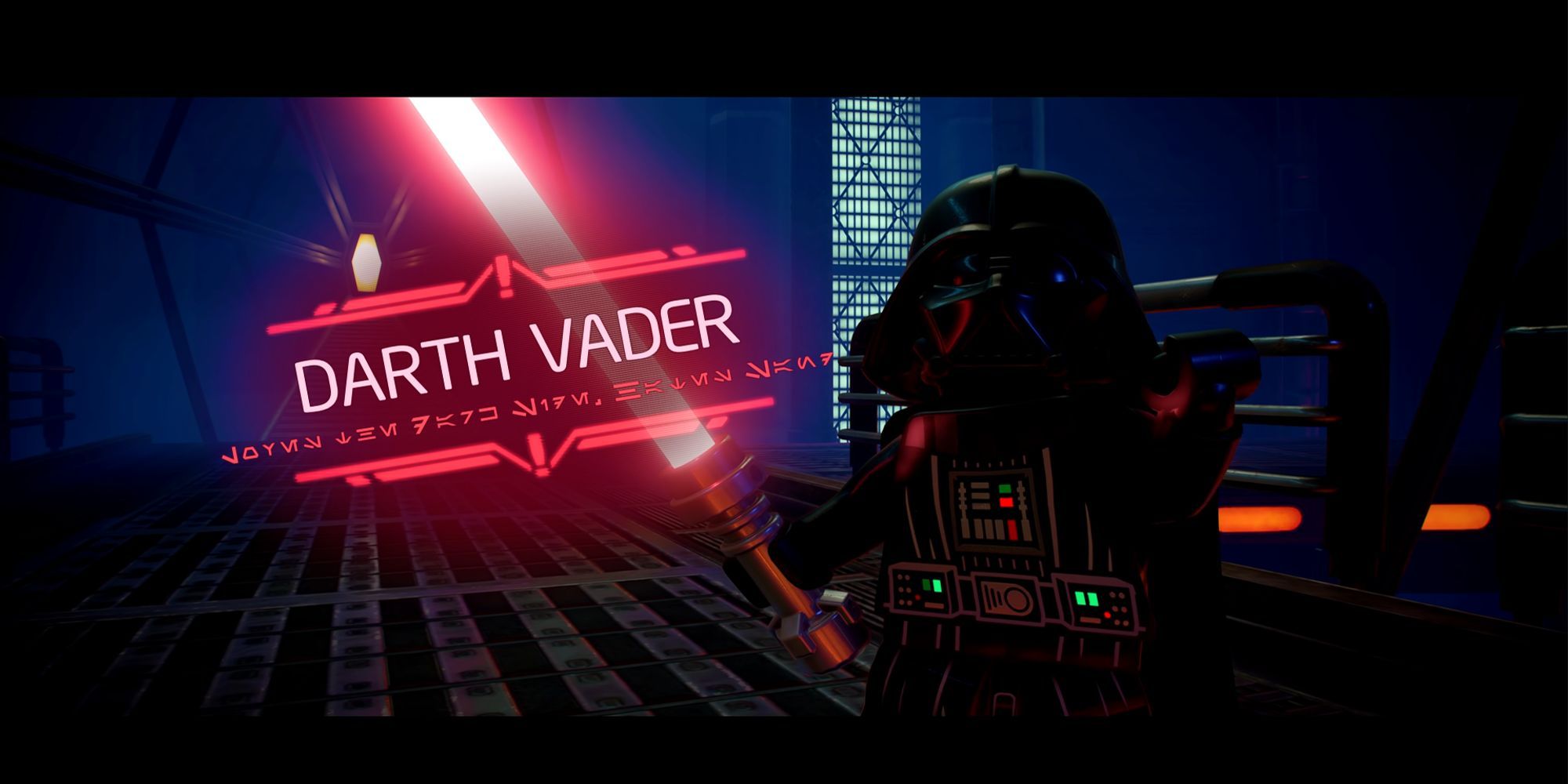 Upon release, many players of Lego Star Wars: The Skywalker Saga were quick to notice the Aurebesh writing underneath the title cards of Boss enemies. Thanks to the availability of the language's alphabet on the internet, the translation of these captions became possible and yielded some pretty hilarious results.

Although not all captions are mention-worthy, with some simply describing the characters' roles, the comic ones far outweigh them. Captions such as Kylo Ren's description as 'Serious Daddy Issues' and Darth Vader's 'Loves the Dark Side, hates sand' have certainly caused hilarity among players and have made for a really fun Easter Egg in the game. 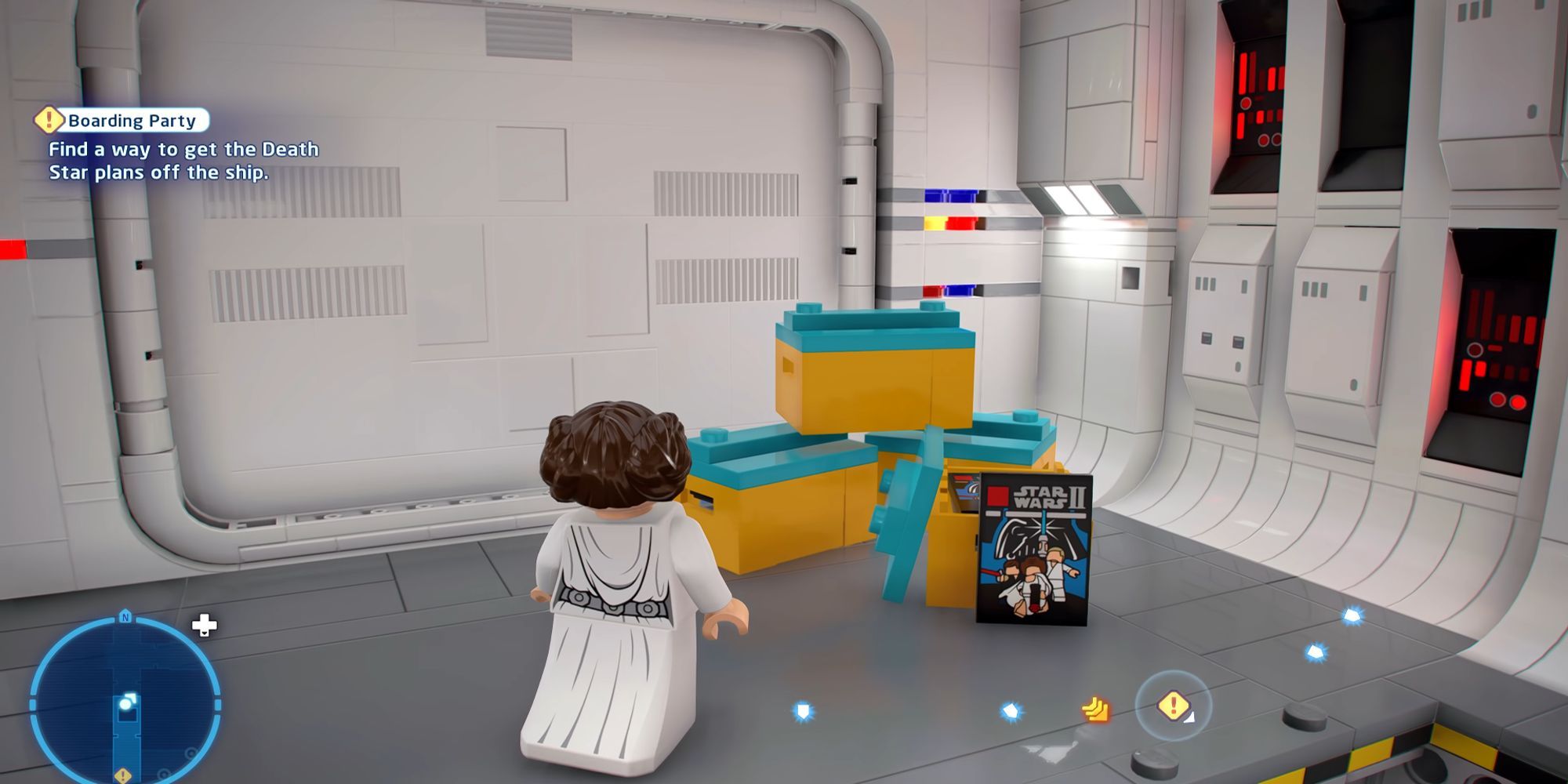 Although Lego Sar Wars games have been coming out since 2005, 17 years later it seems that developers wanted to pay homage to a few of the games that predate The Skywalker Saga. Three references to three of the previous Lego Star Wars Games can be found in different episodes in the form of replications of the games' cover art. 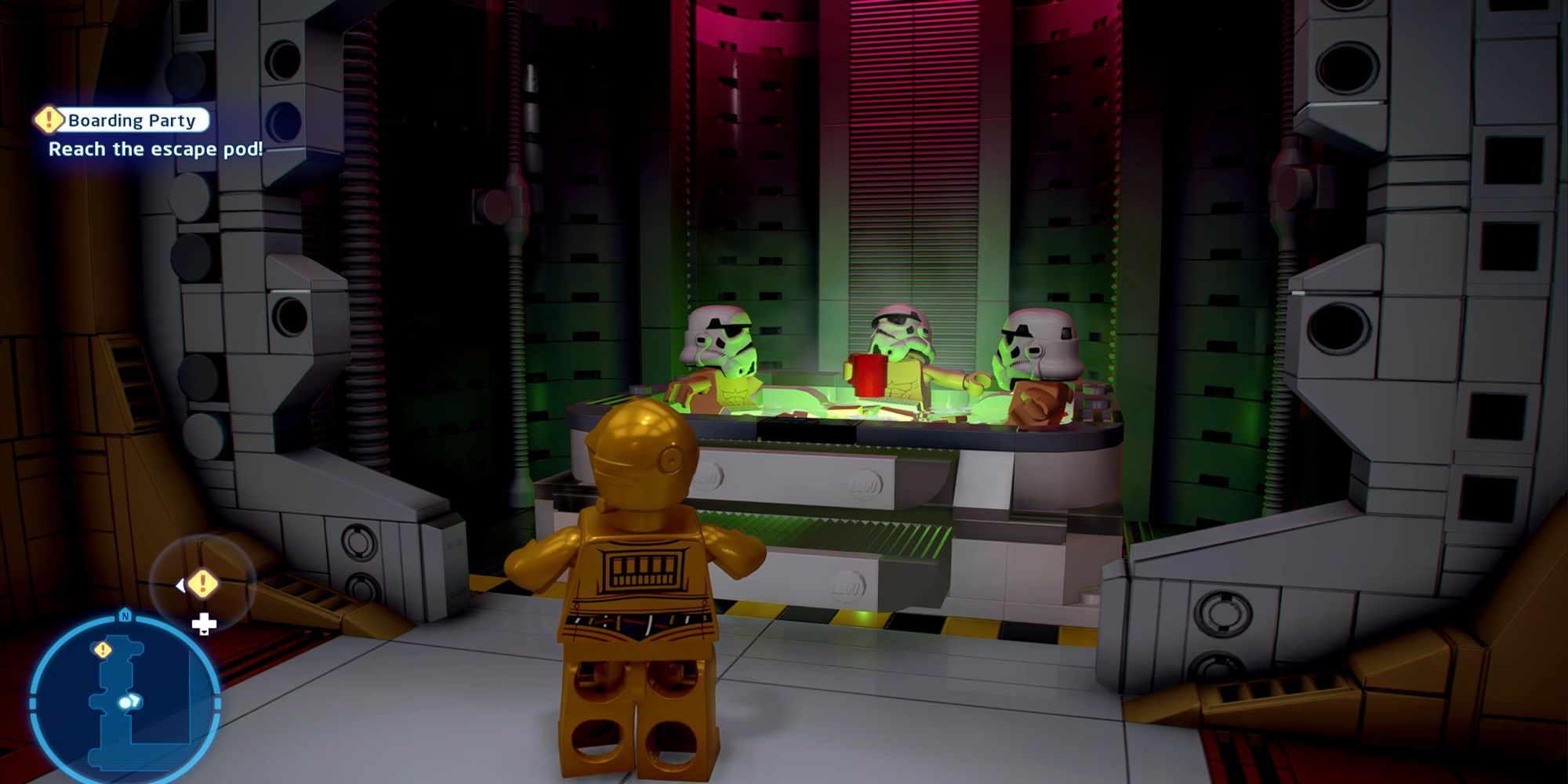 Referencing prequels in a game has always been a fan-favorite Easter Egg, especially in the Lego Star Wars universe where things usually take a comic turn. Although there is more than one nod to previous games (such as the dancing chairs in Episode One), the best one by far is the hot-tub Stormtroopers.

One of the best secrets in the 2006 Lego Star Wars 2: The Original Trilogy game was where, after a bit of exploring, you could discover a group of Stormtroopers off-duty and relaxing in a hot tub donning matching blue bathing suits. In the new Lego Star Wars game, in Episode Four on the questline 'Boarding Party', you are able to open a door to a group of Stormtroopers in a similar situation. 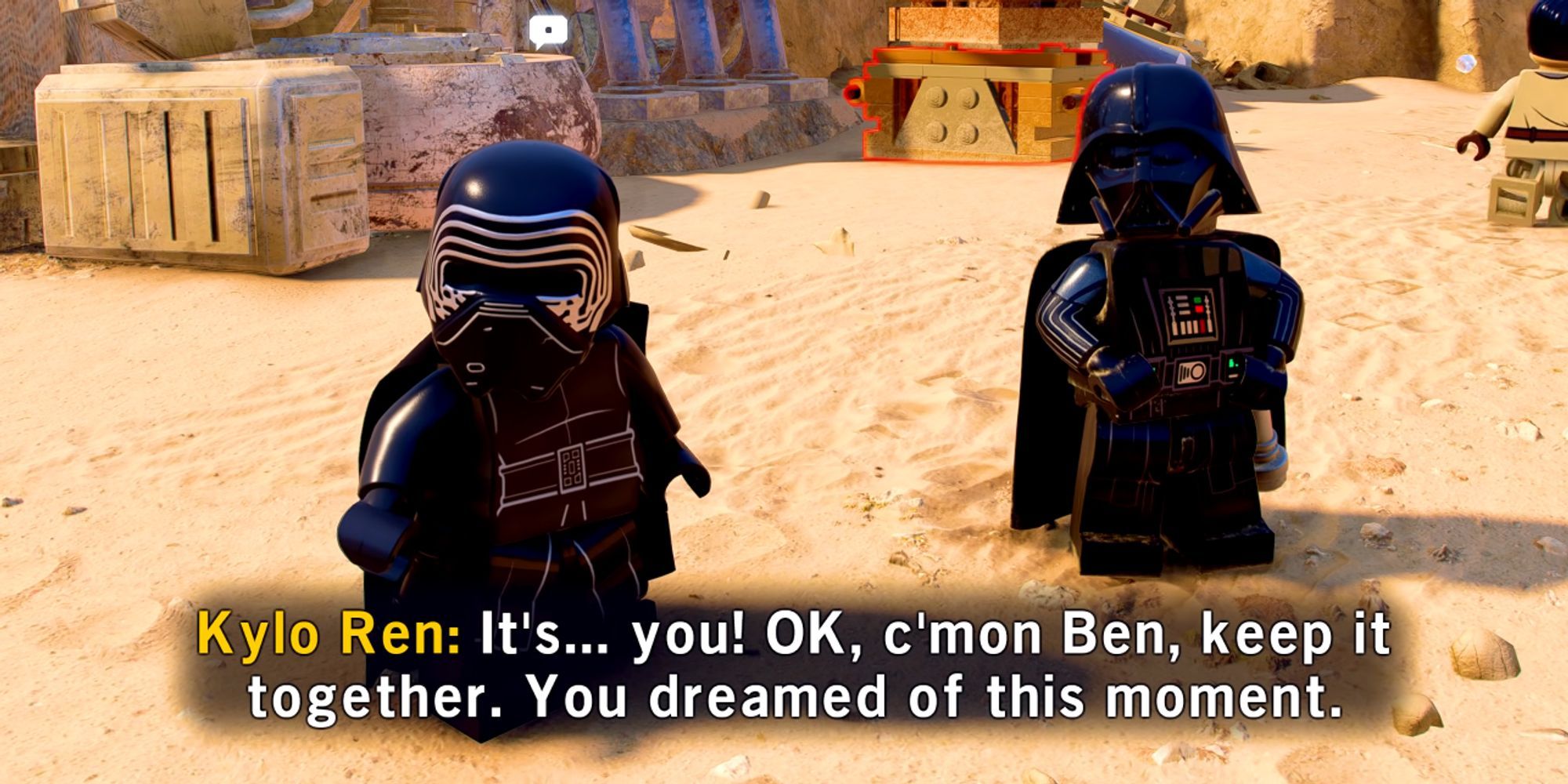 Many players have been enjoying the wide range of playable characters that have been made available in the new Lego Star Wars game, from old fan favorites to figures that are featured in the latest trilogy. With a whopping 380 playable character options, players have noticed that pairing up certain characters can trigger fun and unique dialogue instances when they are left idle.

For example, when pairing Kylo Ren with Darth Vader, you'll be privy to a rather hilarious display of Kylo Ren fanning over his predecessor. In another instance, when you pair General Grievous and Count Dooku, the former will attack the latter while displaying his many lightsabers. 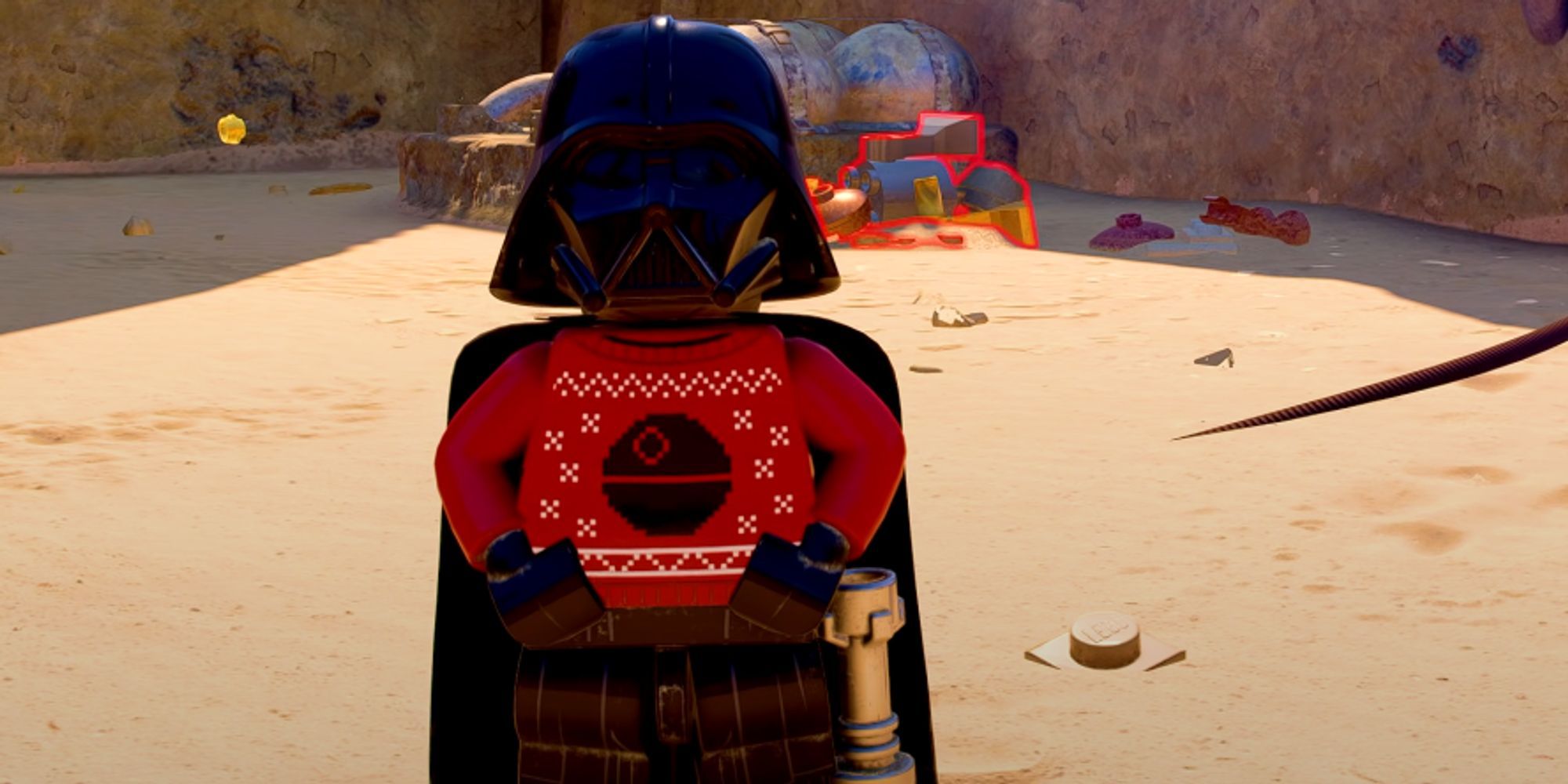 Most games usually advise against cheating and using cheat codes, however, in Lego Star Wars: The Skywalker Saga, using them is actually to your advantage. Although none of the codes are game-breaking, there are a total of 20 codes (that you can find here) that you can enter into the game to get characters and starships.

Most of these codes simply allow you to unlock certain characters before you reach their side-quests in the main game, but some (like the holiday special skins) are exclusive to the cheat codes. In order to activate these rewards, open up your Holoprojector menu, go to the Extras tab on the far right, and click the option to Enter Code. 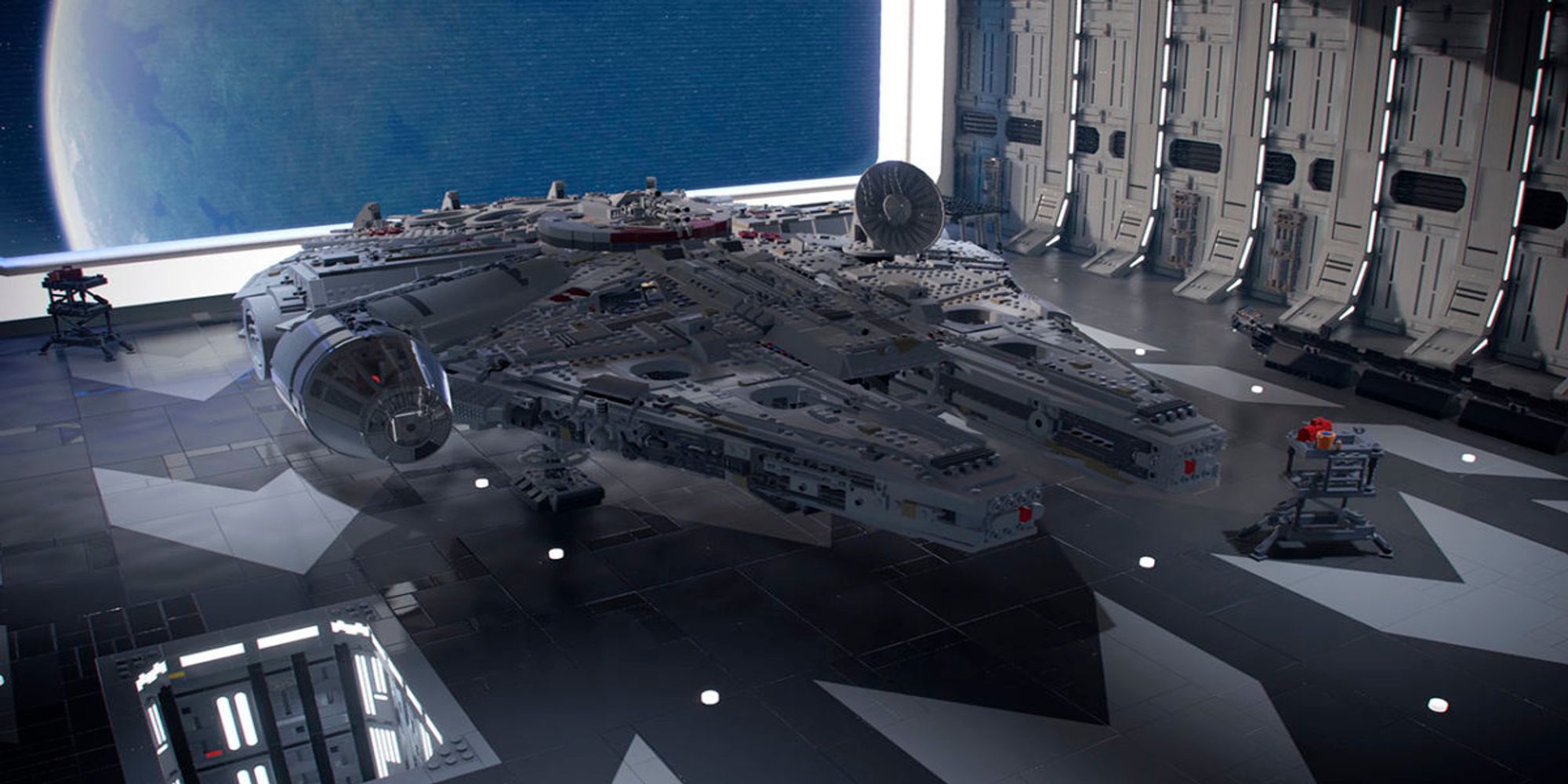 Building the Lego version of the Millenium Falcon is often considered the magnum opus in any Lego builder's collection. It is famously one of the Lego builds with the most pieces, with there being over 7,000 pieces to assemble in its creation.

The Skywalker Saga makes reference to this in the Hunk of Junk mission in Episode Four, where Han Solo makes a comment about it when the Millenium Falcon is being repaired. He says, "Make sure you fix it properly! We need to get outta here in one piece. Rather than seven thousand little ones…", making a meta-style joke about his treasured ship. 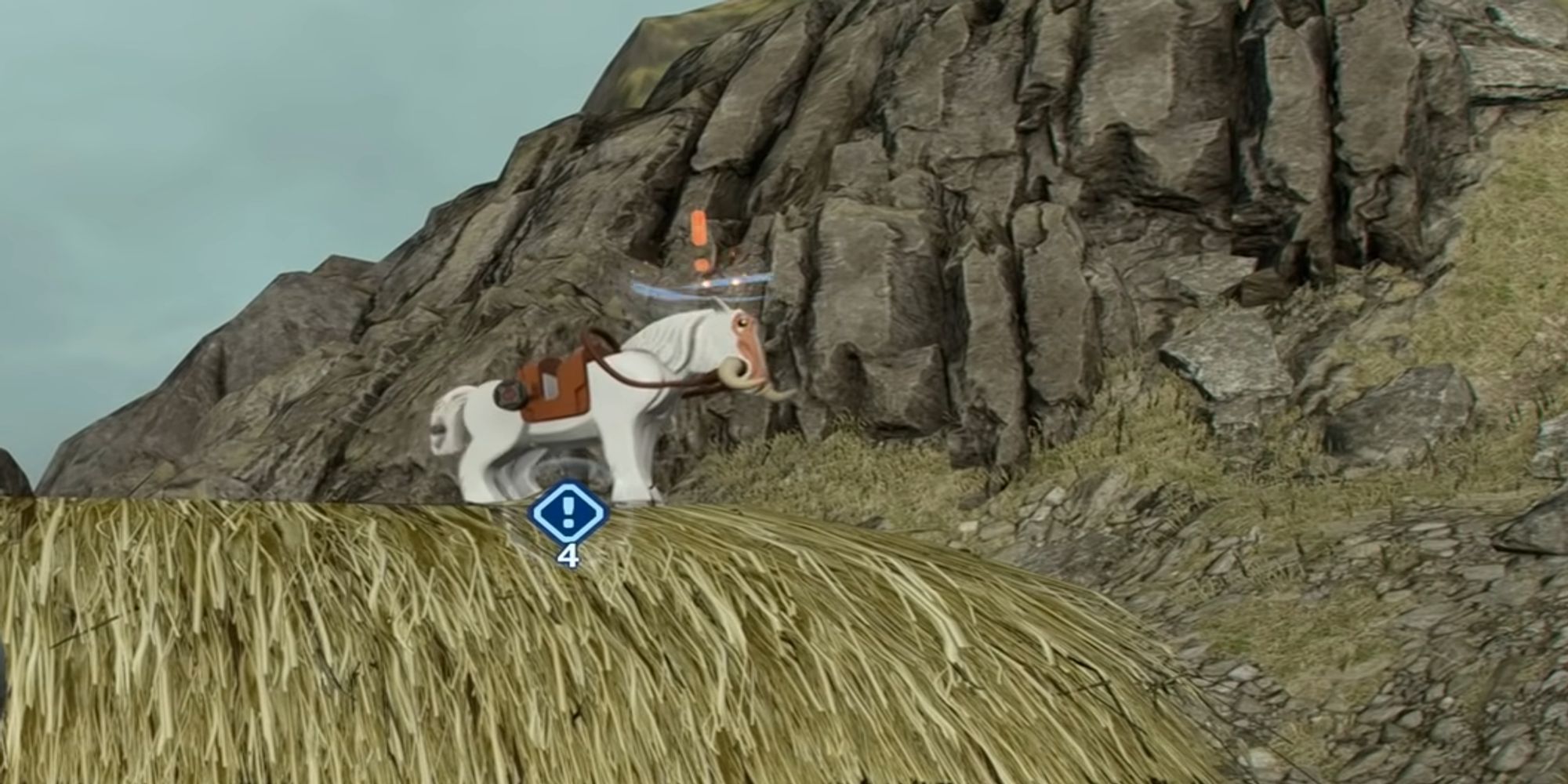 The Witcher 3 is one of the best-known names in the gaming community, even more so with the popular Netflix show The Witcher. In the Kef Bir side quest 'Untitled Orbak Game' (which is a reference to Untitled Goose Game), the game pays homage to one of the most notorious glitches in the game.

Just like the way in which Geralt's trusty horse, Roach, glitched onto roofs in The Witcher 3, in this game you have to rescue an Orbak who has met the same fate of being stuck on the roof of a house. It's important to note, though, that this time it's intentional. 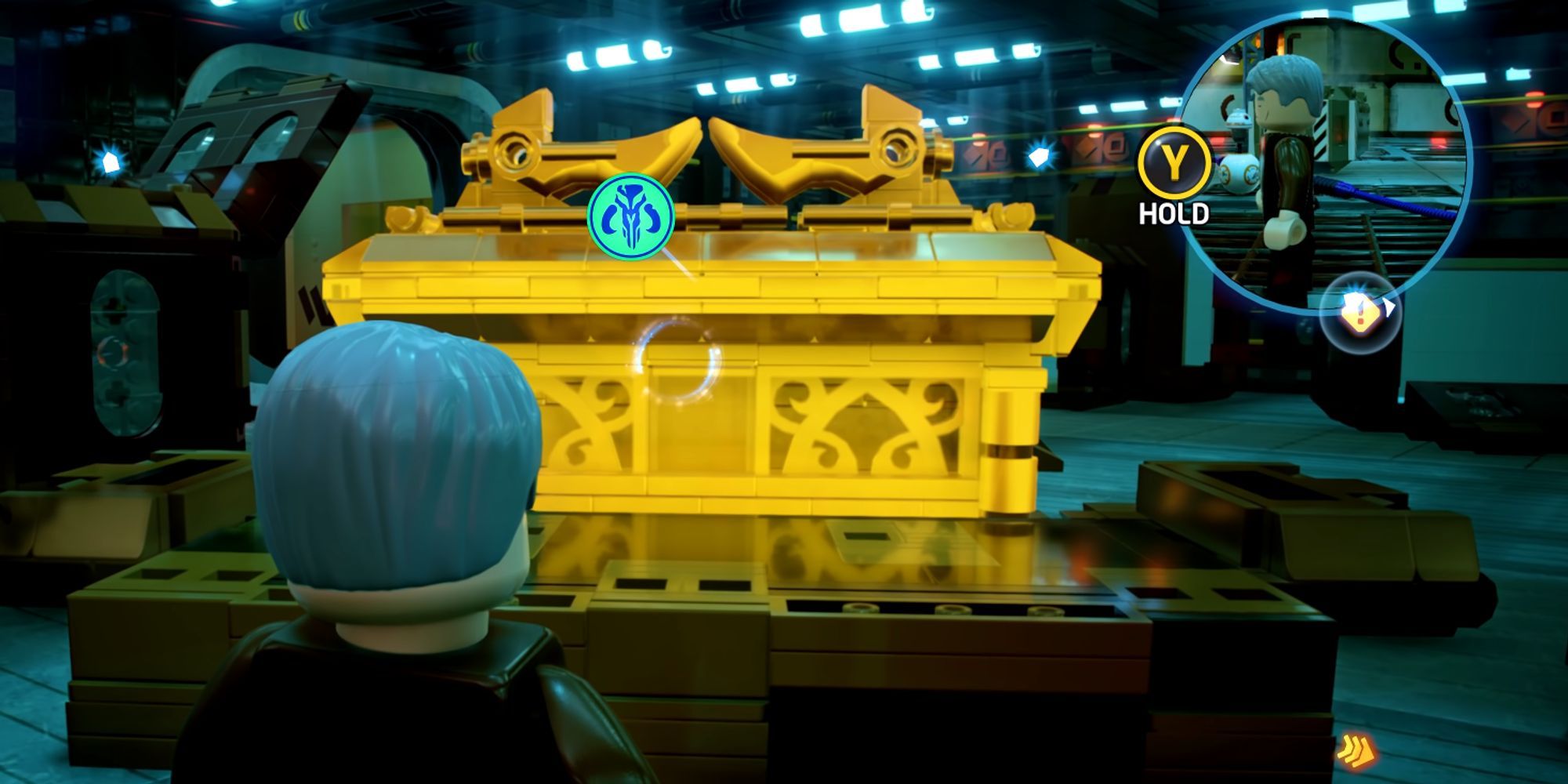 Harrison Ford's career in the film and television industry is not one to be taken lightly, with him playing iconic roles in a number of different productions. Aside from featuring his character, Han Solo, the Lego Star Wars Skywalker Saga also makes reference to another one of his roles: Indiana Jones.

In Episode Seven when exploring areas for the quest 'Reap What You Solo', you are able to find a box that, when unlocked by a series of icons, displays the Ark of the Covenant that was featured in the film Indiana Jones and the Lost Ark. Additionally, there is a reference to the Indiana Jones film series in the side quest titled 'Raiders of the Great Temple', as well as a hat that was a signature of the Indiana Jones character flying away in a cutscene when the airlock breaks in Episode Four. 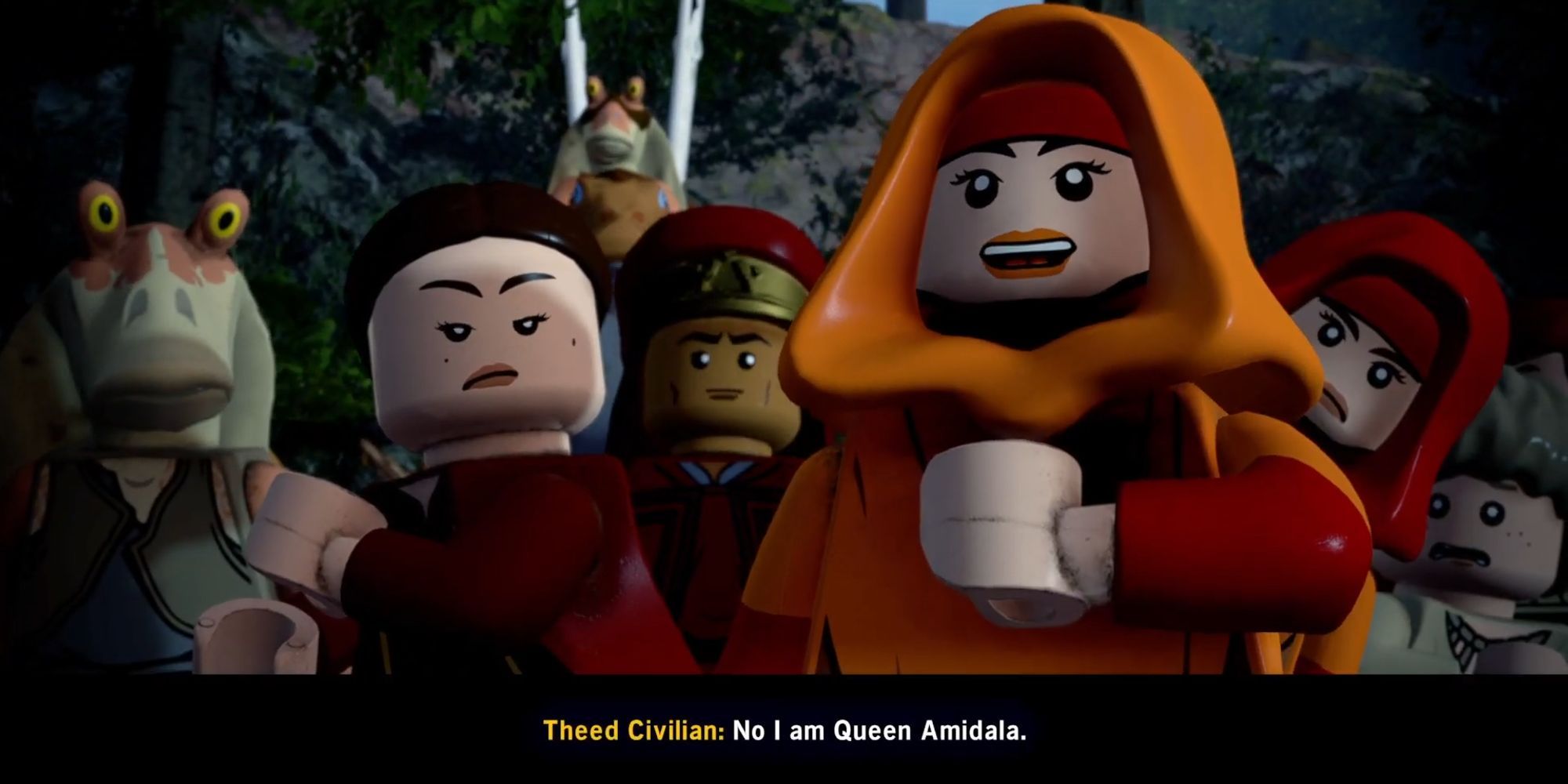 The 'I'm Spartacus' movie scene is one of the most iconic in all of film history and has been referenced in countless different productions. Lego Star Wars: The Skywalker Saga is no different from these, as the game makes reference to the scene where multiple slaves claim themselves to be Spartacus to save the real figure.

In Episode One, a similar situation happens when Boss Nass asks who approaches him and multiple Theed Citizens, a Rodian, and even a Jawa announce that "I am Queen Amidala". This reference is one that can be easily overlooked by people unaware of the 1960 film, but regardless is a great Easter Egg that's bound to elicit at least a chuckle.