One aspect of the game that Assassin’s Creed Valhalla players will have to become familiar with is the different types of enemies. They will encounter some who will do little to no damage to them, while others can take them out in just a few hits. One important thing to note is whether or not the header above the enemy’s name is in gold or white, as the gold types of enemies tend to be more difficult.

Each enemy in the game has different tactics, weapons, and skills that can make them difficult to defeat. Some are harder than others, but with this guide, you are sure to easily beat any enemy type you happen to come across as long as they are within your current power level in Assassin’s Creed Valhalla. 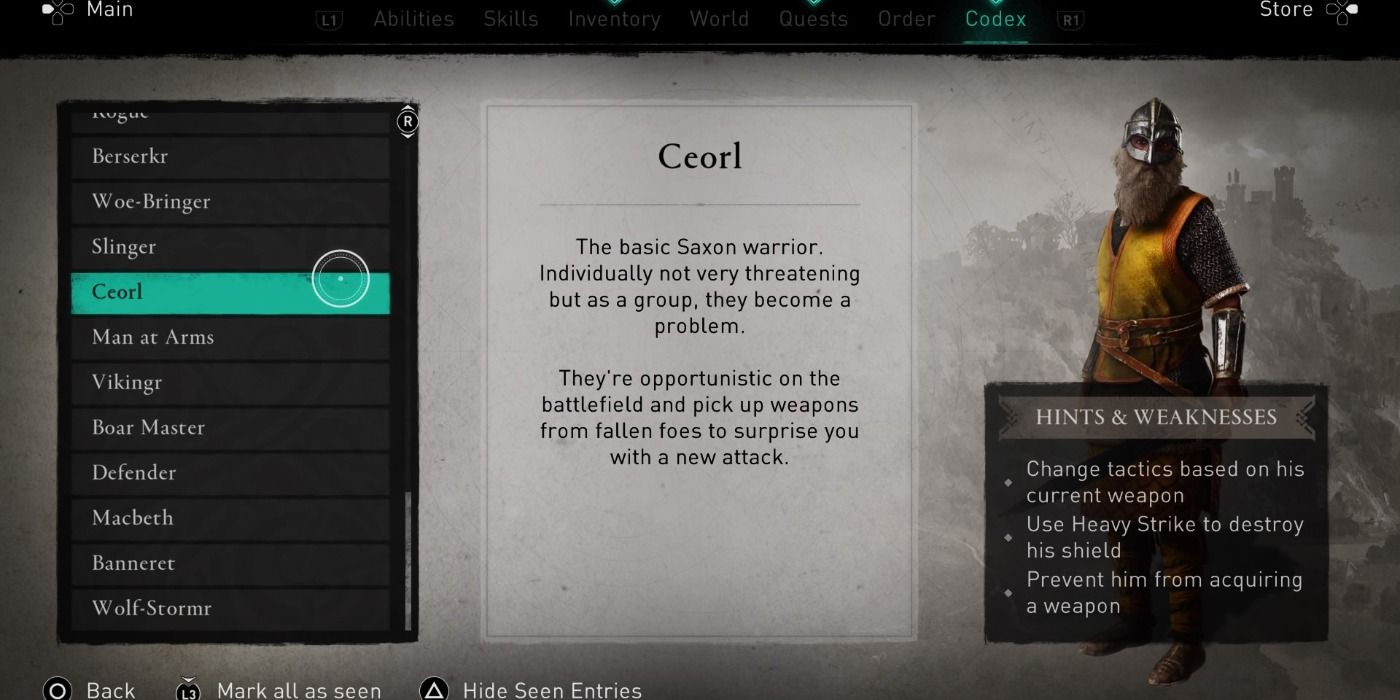 This is a basic Saxon warrior who is the easiest enemy to defeat as they only have basic training and often lack a shield. They can pick up other weapons on the battlefield, but a couple of hits and they will be gone for good. If you encounter one alone it’s not a big deal, but in larger groups, they can become a bigger problem. 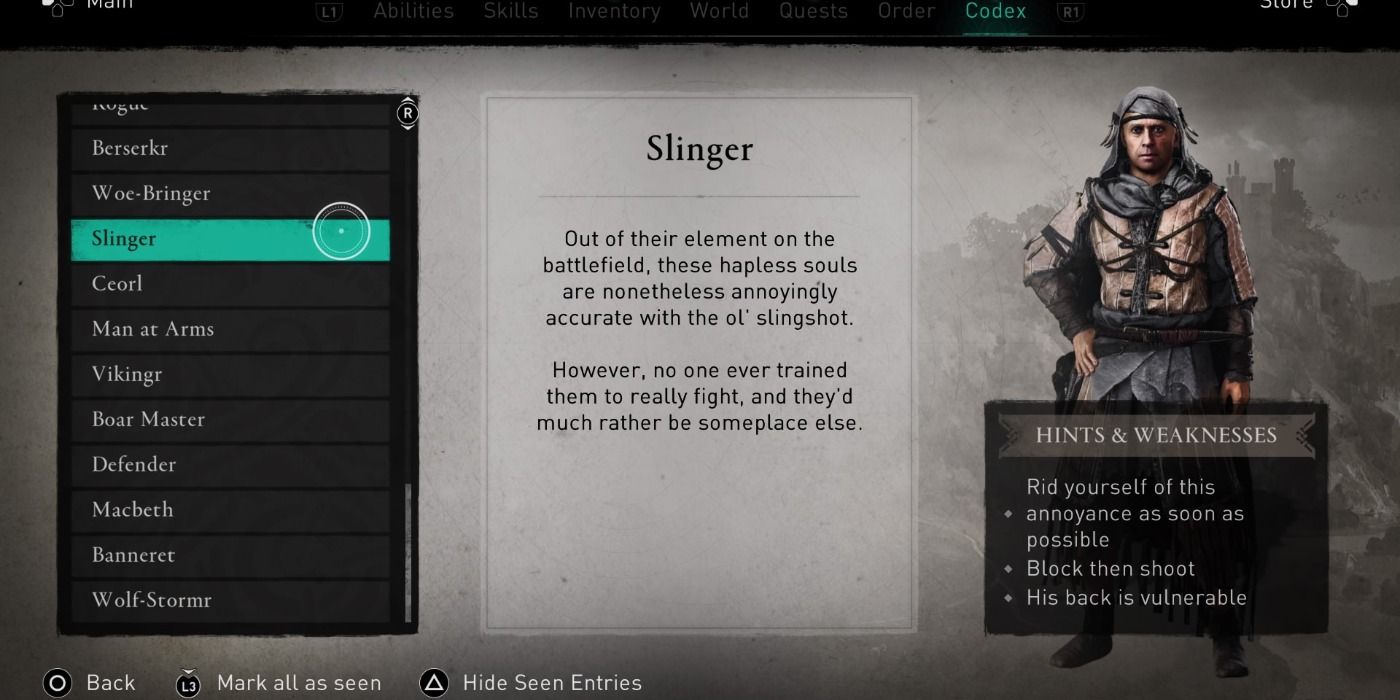 The Slinger isn’t super deadly, but they can be really annoying. They enjoy throwing things at you so use your best bow as soon as possible to rid your fight of these enemies. This enemy is one of the worst things about Assassin’s Creed Valhalla as they are more of a nuisance than an actual opponent. 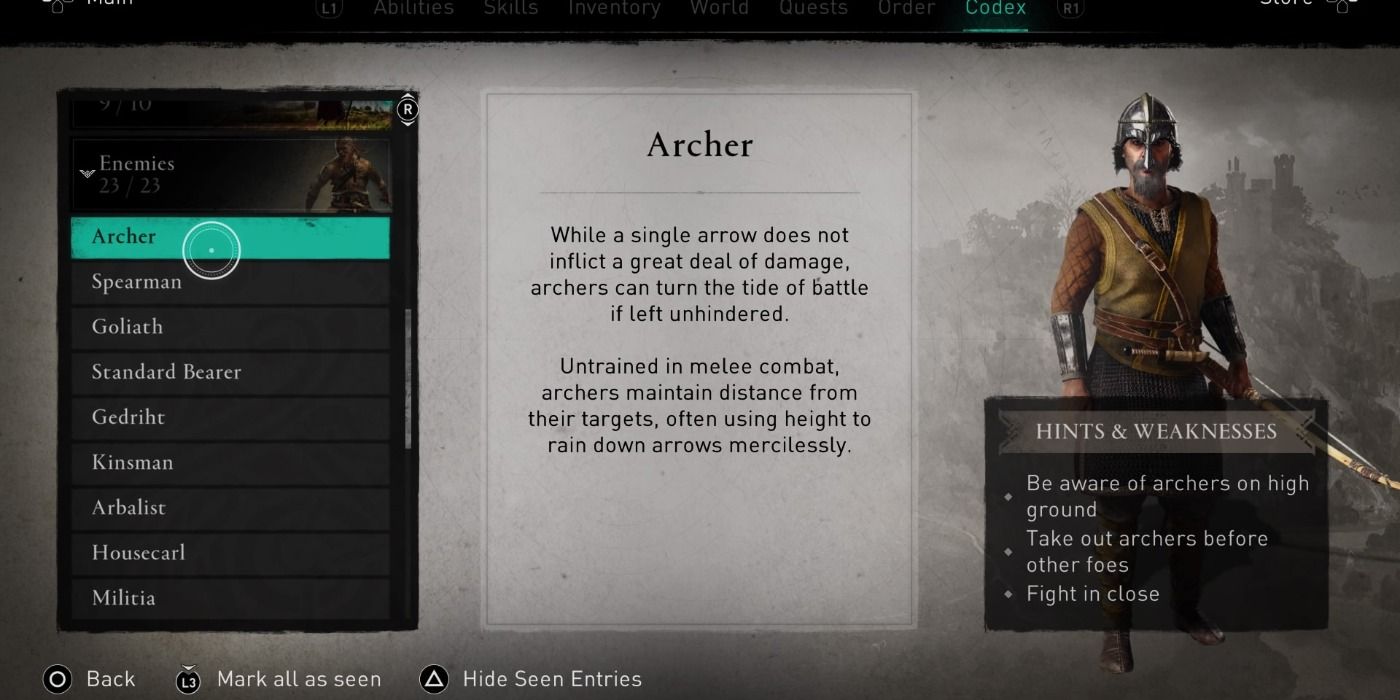 Archer’s fight from a distance with their bows, but they have fairly little health compared to other fighters. The only reason they are not ranked all the way at the bottom is due to the fact that they can do quite a bit of damage, especially if you find yourself in a fort being shot by more than one.

A tip is to take them out first so you don’t have to worry about their arrows slowly depleting your health. 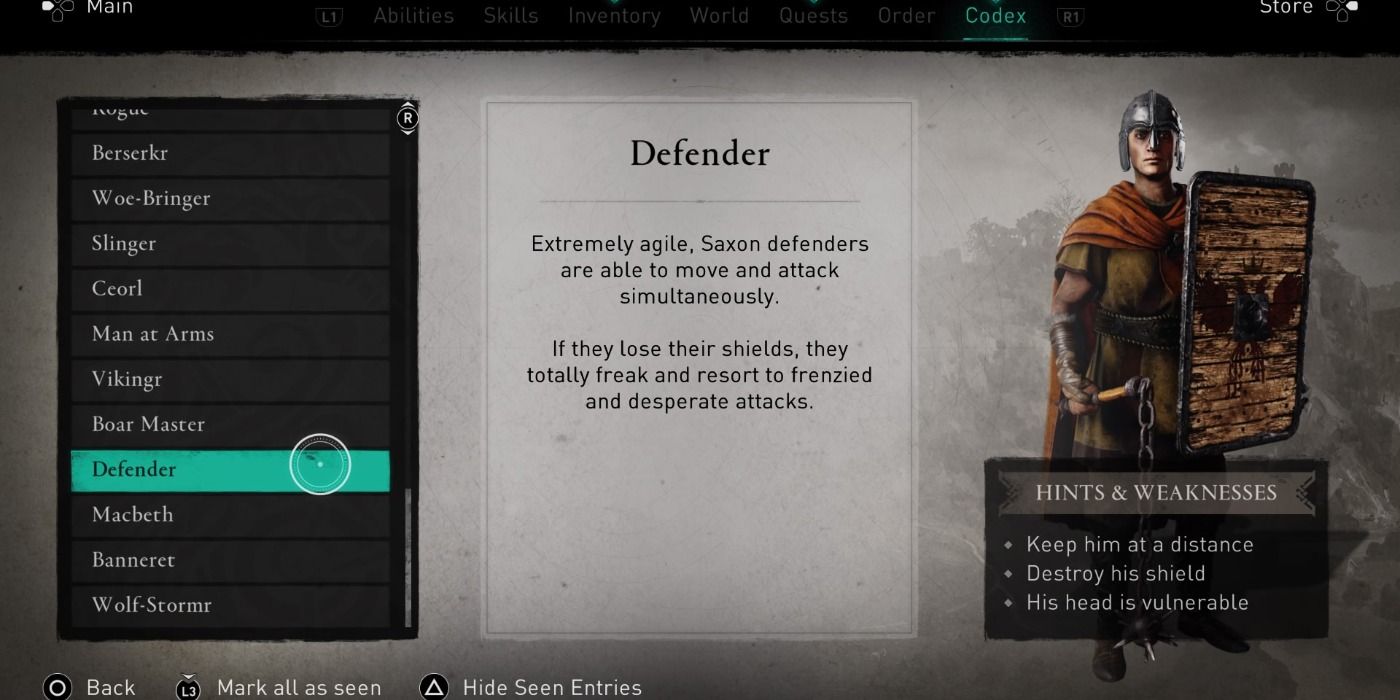 A Defender is a Saxon soldier and their shields are their lifeline, which is good to know as you will probably run into them during a side quest or two. If you destroy their shield then they will lose all hope and release a series of attacks. Aim for the heads of these men and it will be easy pickings for you. 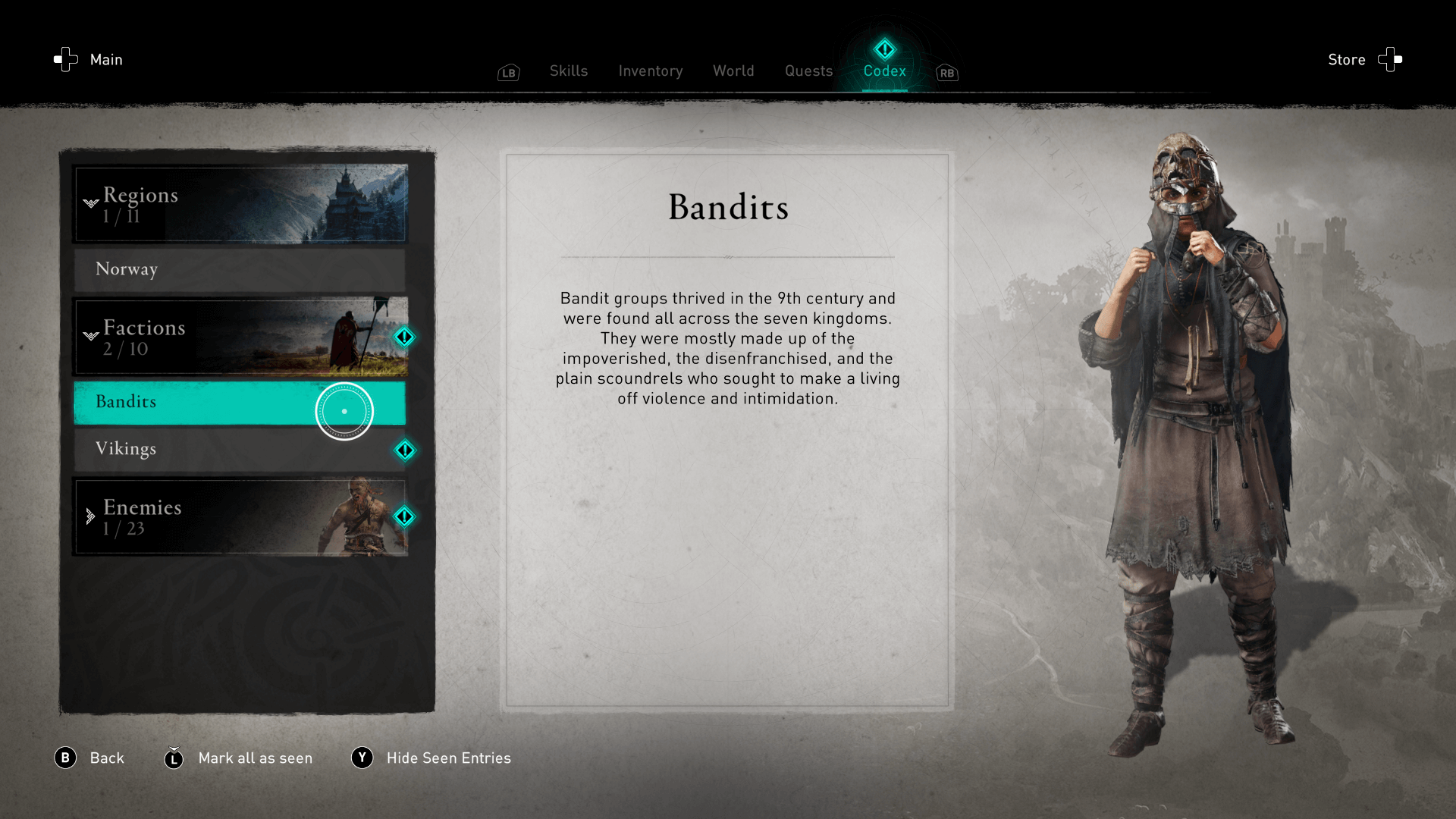 Bandits reside in Bandit Camps and they are not too difficult to defeat. They don’t have great fighting skills, but they are relentless. It is best to try and take them out first to prevent them from slowly wearing down your health while you take care of more difficult enemies. 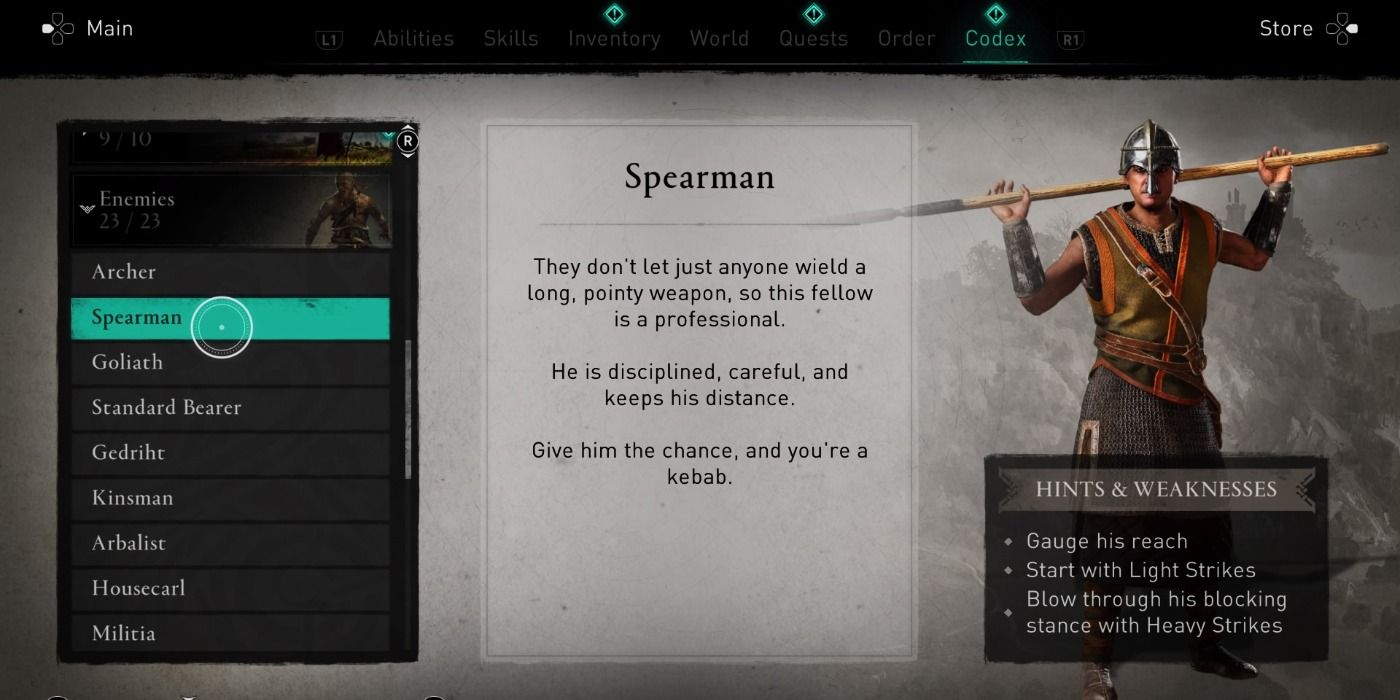 A Spearman is a bit more difficult but still fairly easy to defeat as long as you understand their attacks. The goal is to wait for him to strike, then dodge behind him and deal a series of light attacks to take him out.

If you make an overpowered build it can make a huge difference against this opponent as only a couple of hits will take them out. 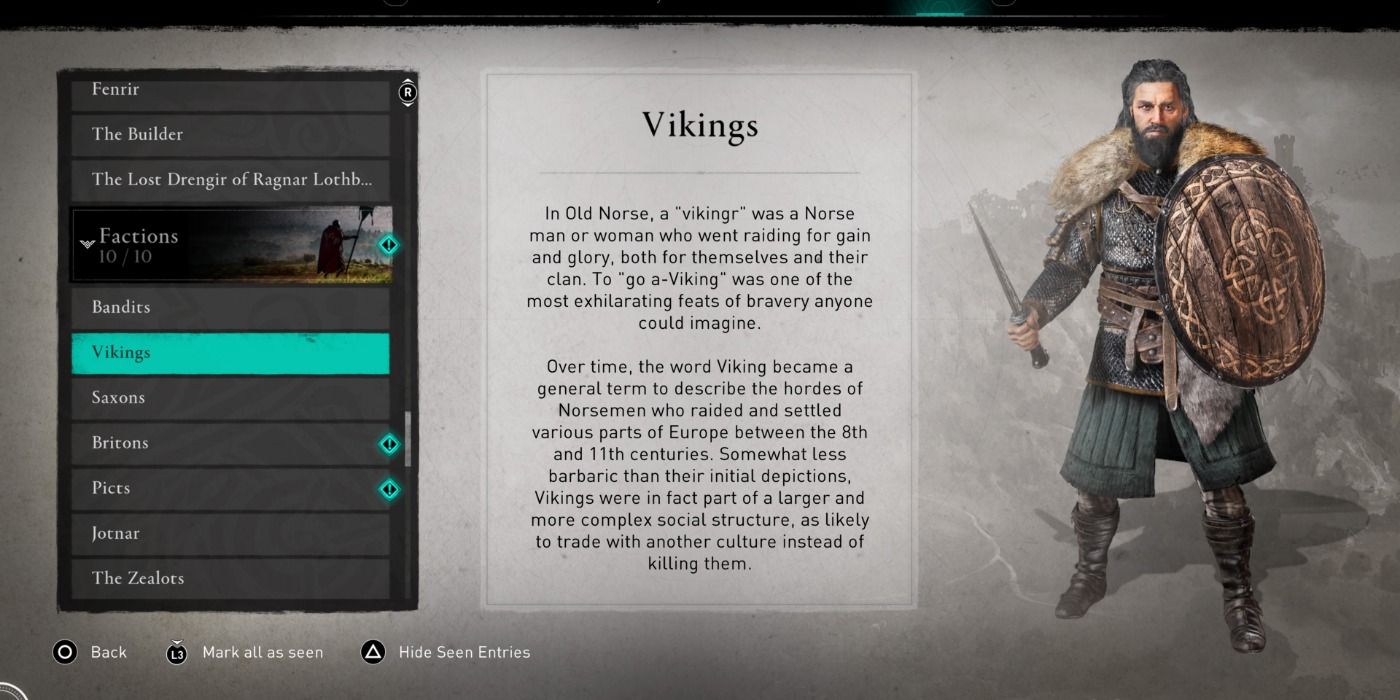 The Vikings you will come across are not as skilled as Eivor, but they are just as aggressive. Their style of fighting relies on striking fear into their opponent and never letting up even if it leads to their death.

Once you understand this and equip your best Light Shield, then you will be able to take them down with little effort. 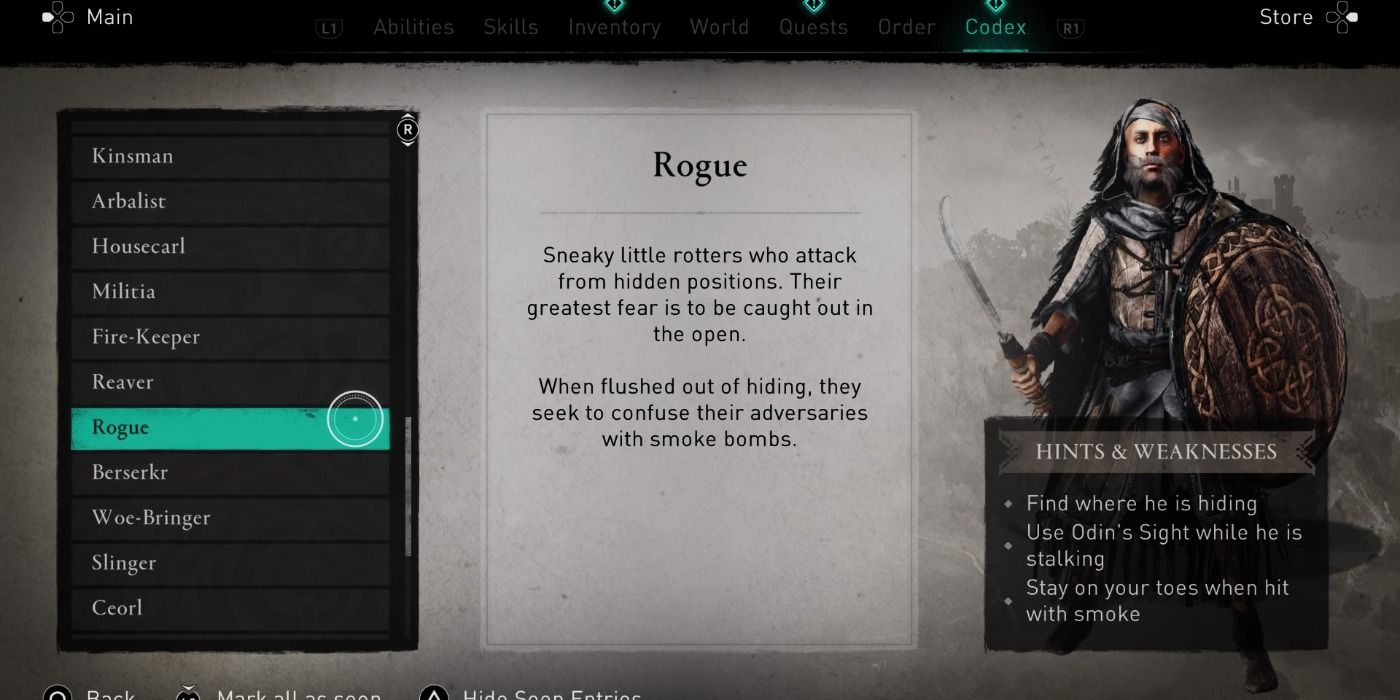 The Rogues live to hide, and they are really good at it as they will seemingly hit you and disappear in a moment. They love to hide in tall grass and use smoke bombs if they feel the need to escape from a fight. Odin’s Sight is very useful if you are having trouble finding their hiding spot. 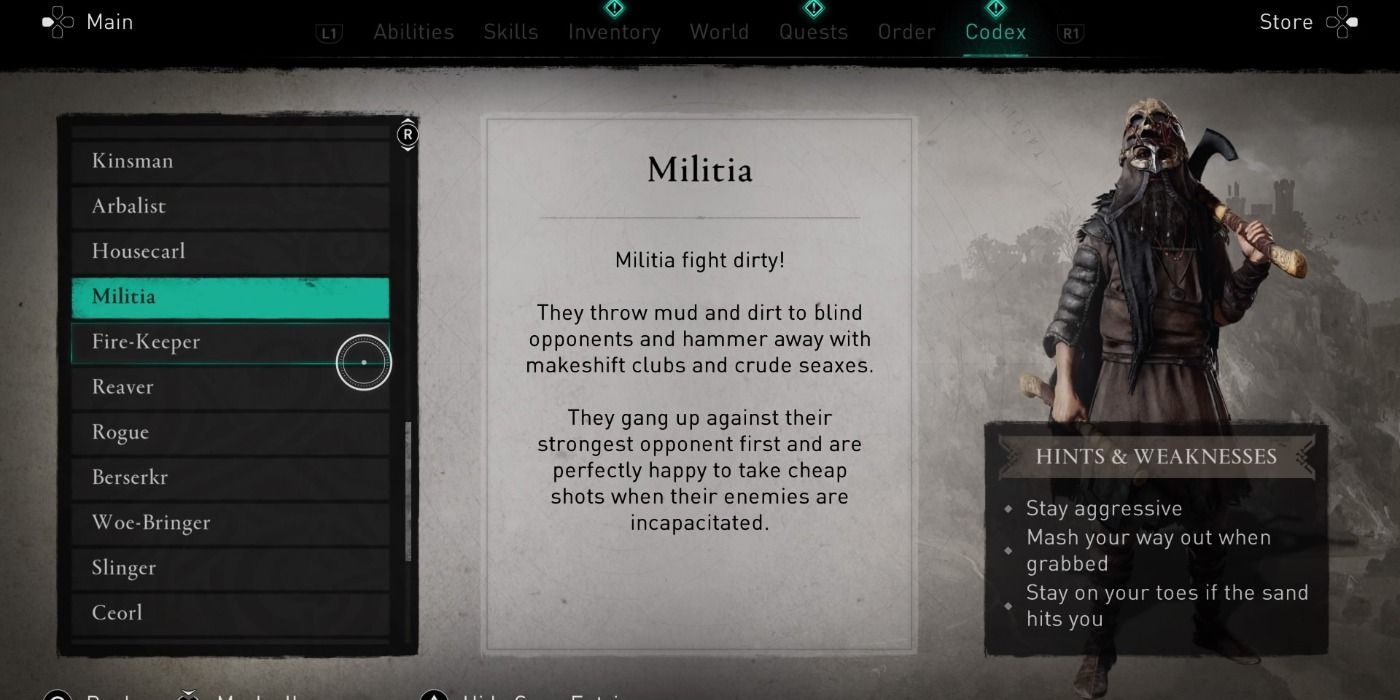 The Militia are fans of the dirt as they will throw it in your face in order to blind you. They also have a knack for working together so keep swinging if they happen to grab you. 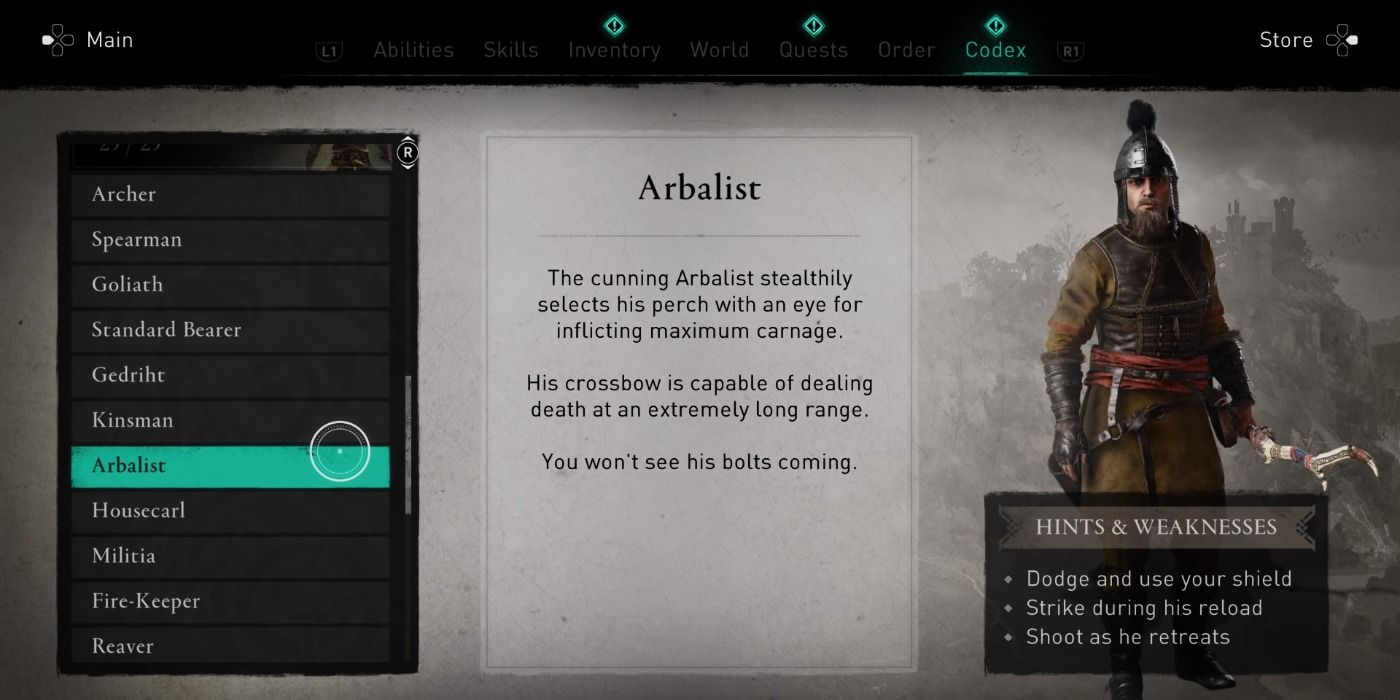 The Arbalist is a gold enemy, but they are more of a nuisance than anything. You can hear when their arrows are ready to fly so they can easily be dodged, but a hit does do a significant amount of damage. It also takes them a few seconds to reload their crossbow and they don’t have much more health than an archer. 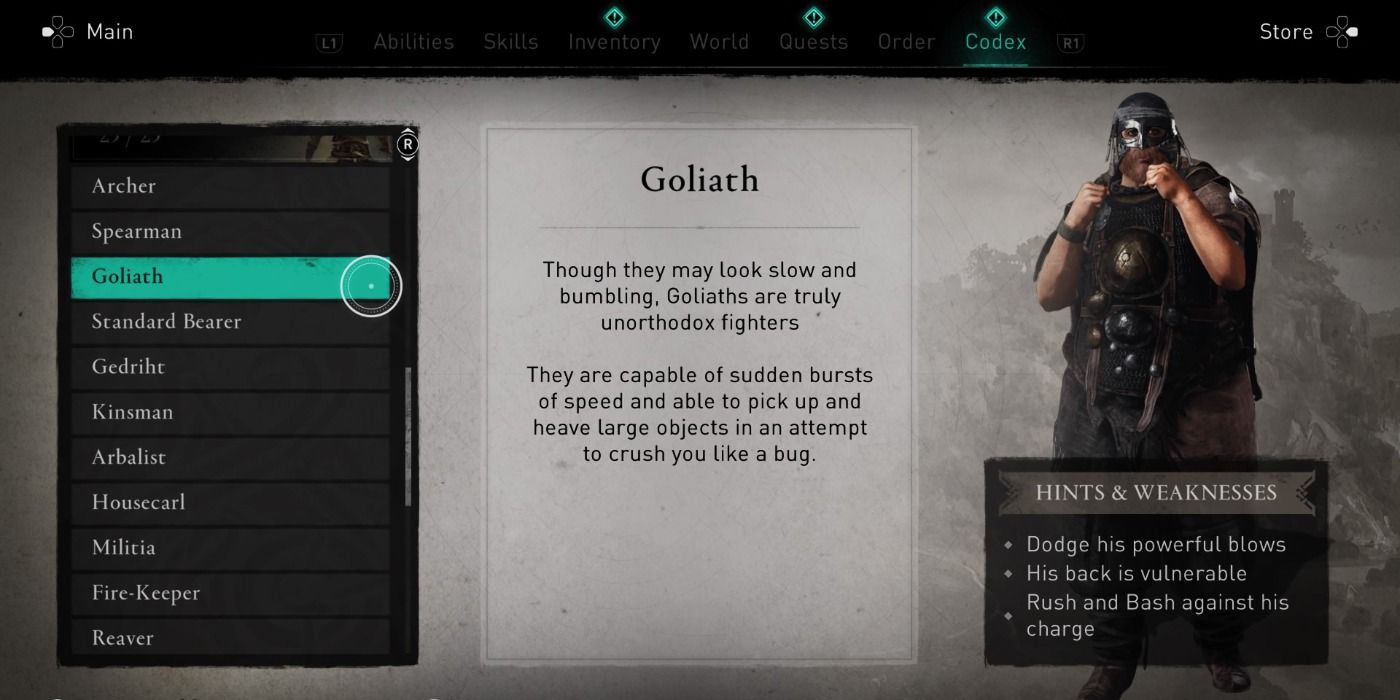 A Goliath is one of the first gold opponents you will face in the game and they are big and strong. Be careful not to stand within their reach as they will throw you, and they will also throw heavy objects at you as well. The best way to defeat them is to gain the high ground and lure them toward flammable red pots which you can shoot to reduce their health. 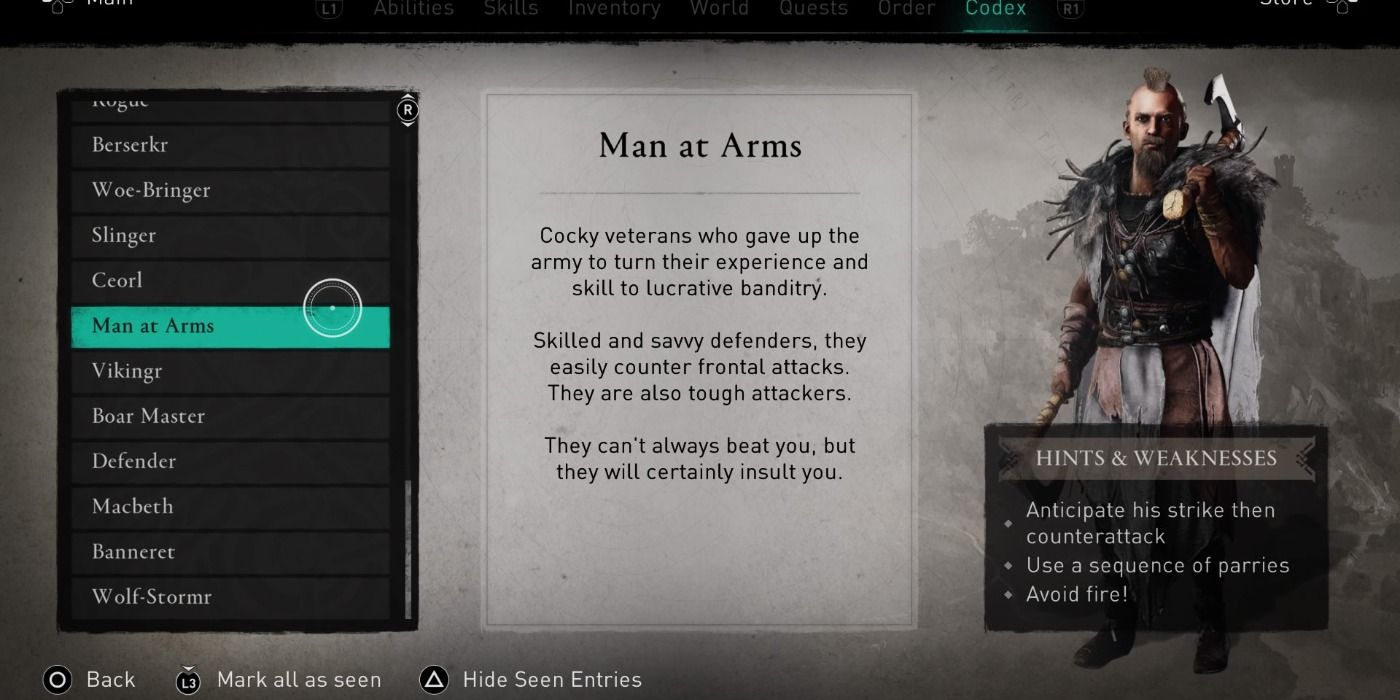 The Man at Arms is a foe who left the army to become a bandit. They know how to counter attacks and they also use fire to their advantage. You will want to employ your parry and then attack in order to kill this opponent.

Investing in the right armor will help you stay alive longer, as the more you upgrade it, the better chance you have of defeating this foe. 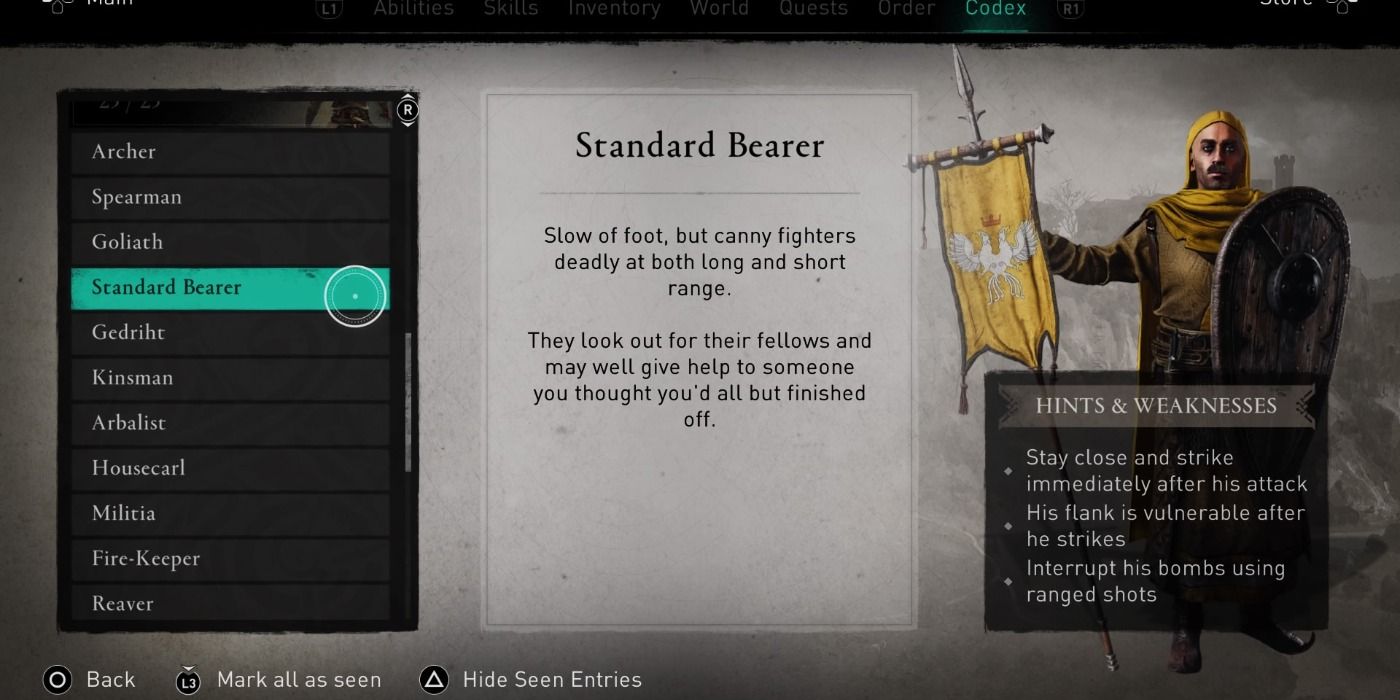 A Standard Bearer has a huge shield that can make him impossible to hit. He does use bombs and using abilities such as the Dive of the Valkyries is often helpful against this foe. You can also add the best runes to your weapons to make this fight even easier. 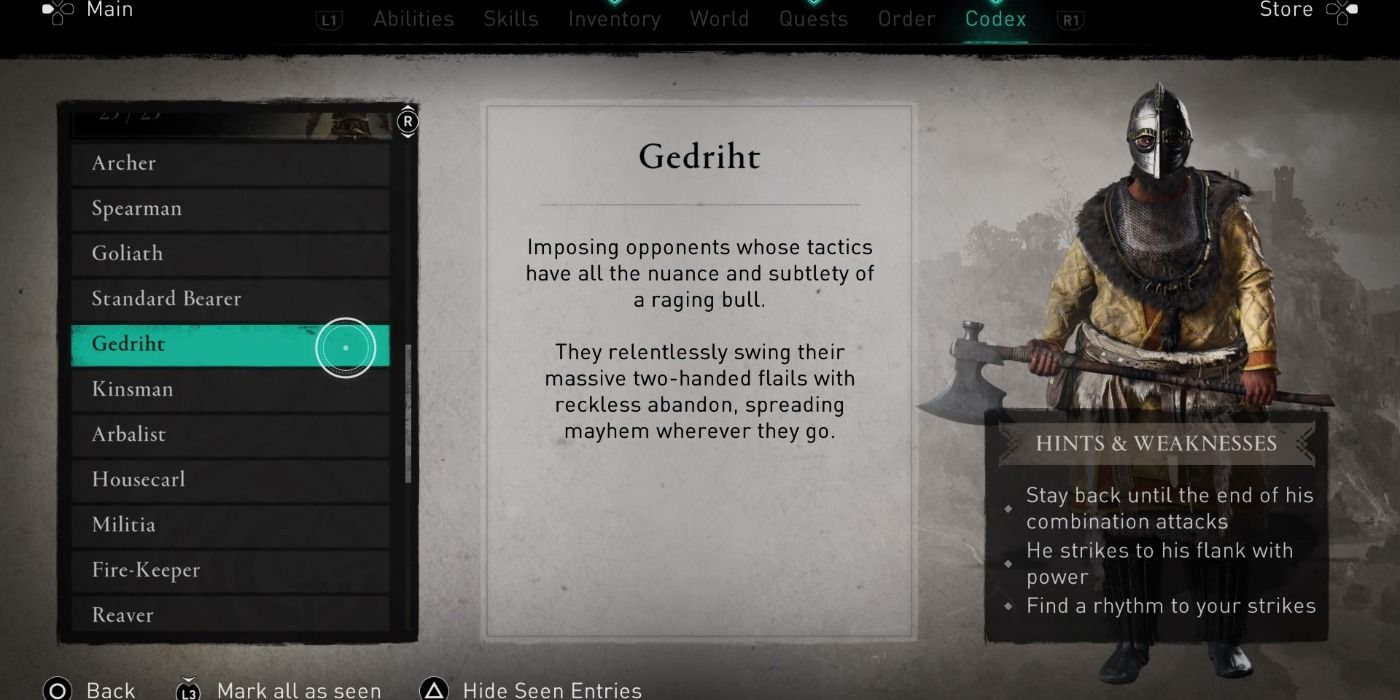 The Gedriht is an admirable foe, but only because they swing a flail around themselves. They also use combination attacks, so wait until they have finished this to land your own hits.

It is worth it to upgrade your settlement in order to obtain the feast buff to give yourself an edge when facing this opponent. 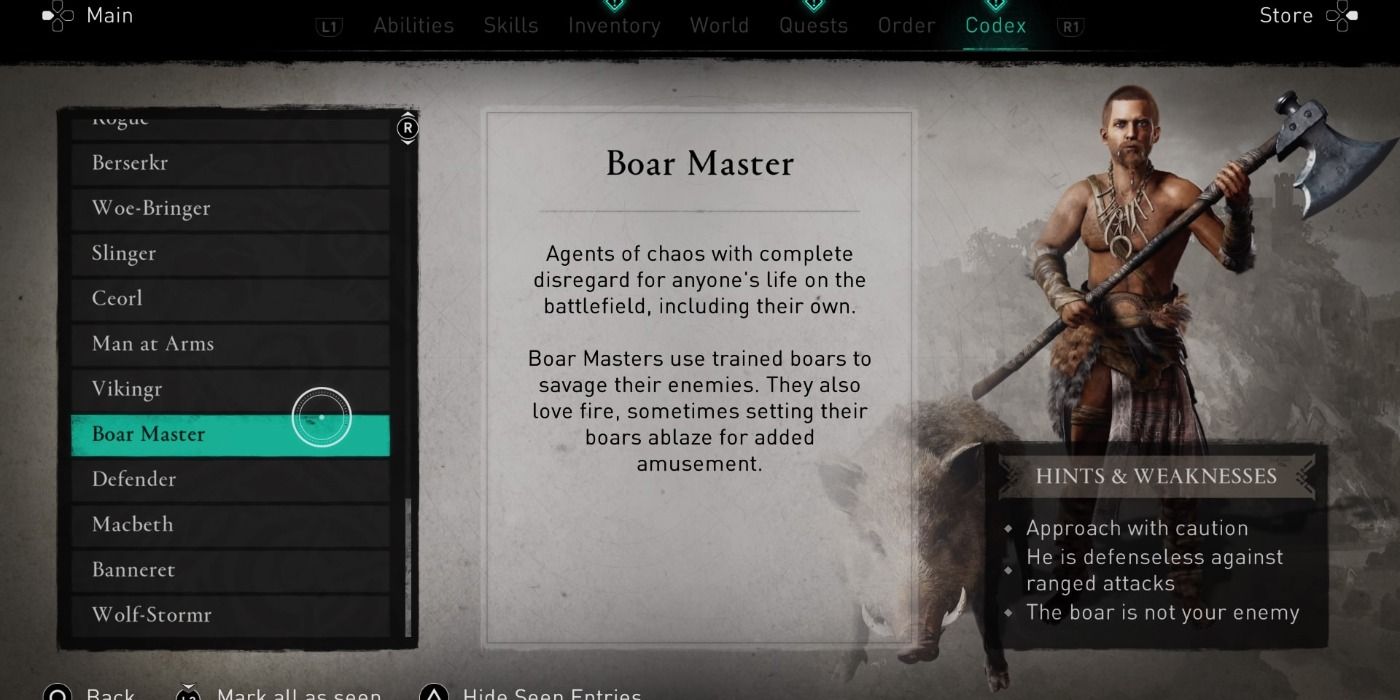 The Boar Master commands a boar, but the animal is not the true enemy. This is one opponent where a ranged build is your friend as a close approach is unwise. Beware as sometimes they will even light the boars on fire to deal extra damage to Eivor. 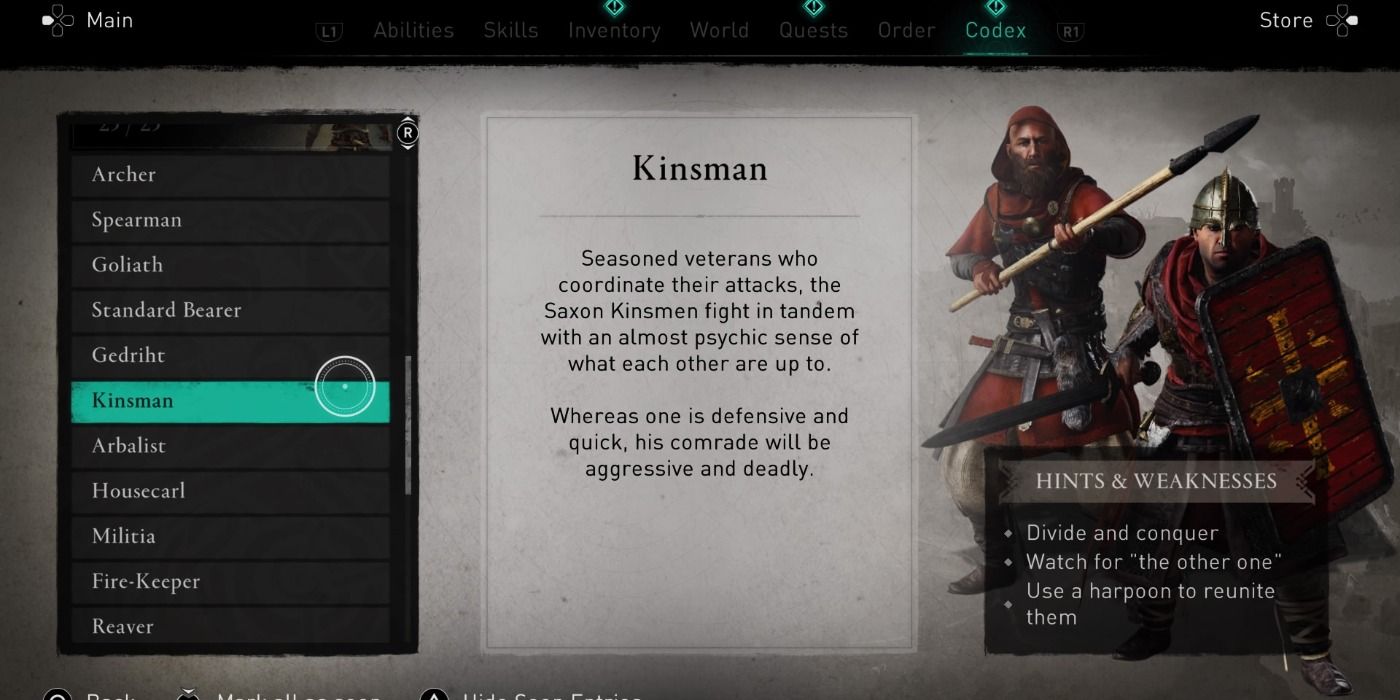 The Kinsman often comes in pairs as they work in tandem to defeat you. One will play the defensive, while the other is aggressive, and keeping them separated is the easiest way to defeat them if you want to survive this battle. 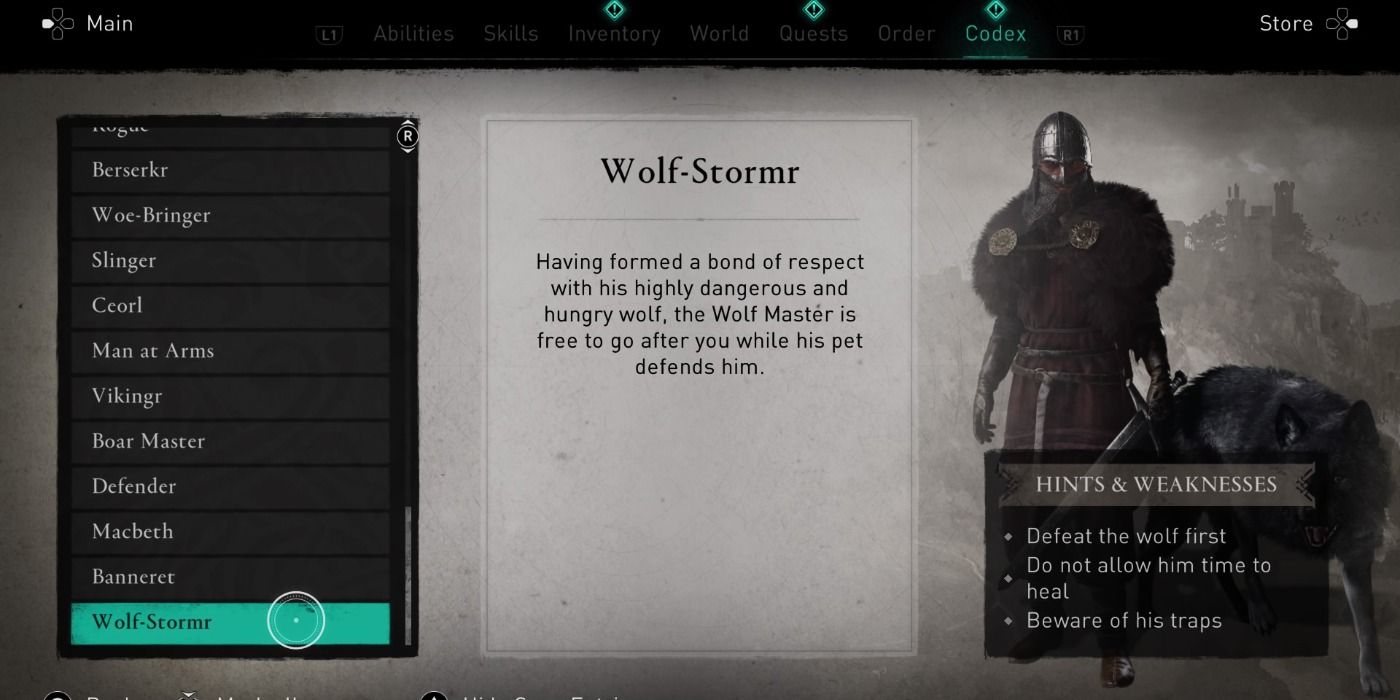 This enemy has a wolf at his command that helps him in the fight. It can make him difficult to defeat, but focusing on the wolf first can help in this situation. He can also lay traps and heal himself, so keep that in mind when facing this opponent. 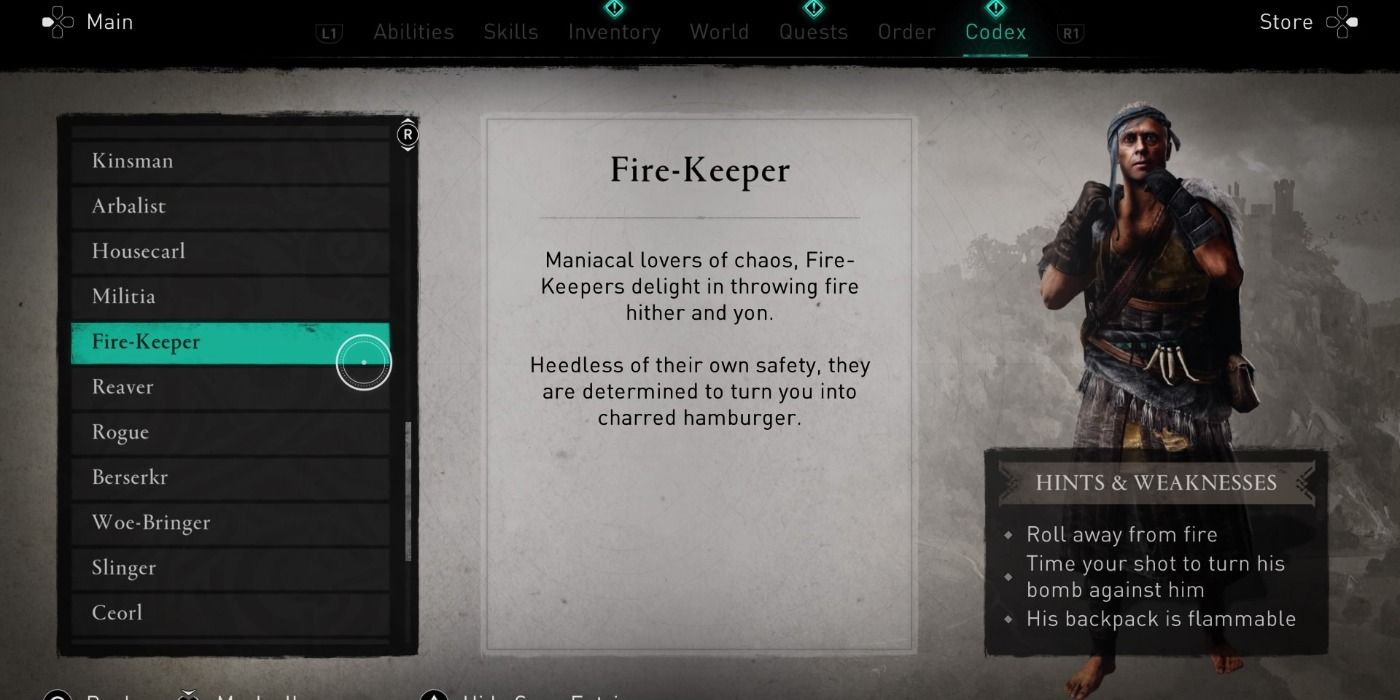 Fire-Keepers utilize flames as their weapon of choice and it feels as if they never stop throwing it. You will want to rid him from the battlefield first, otherwise, you will probably be on fire for the duration of an extended fight. 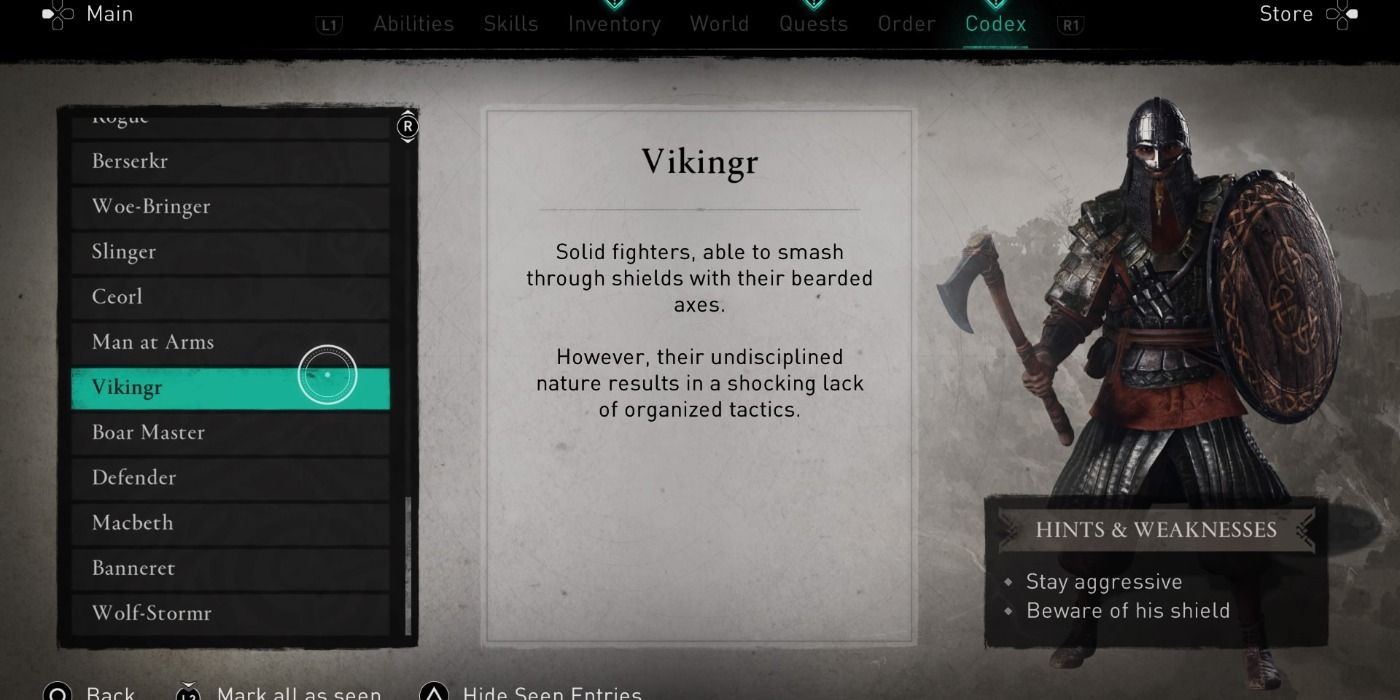 A Vikingr is a solid Dane with quite a bit of fighting experience, but no discipline on the battlefield. They will stop at nothing to defeat their opponents and you will want to play the offensive if you want to come out on top in this fight.

This Dane can be as tough to defeat as some of the easiest bosses, but if you play your cards right it can be an easy win. 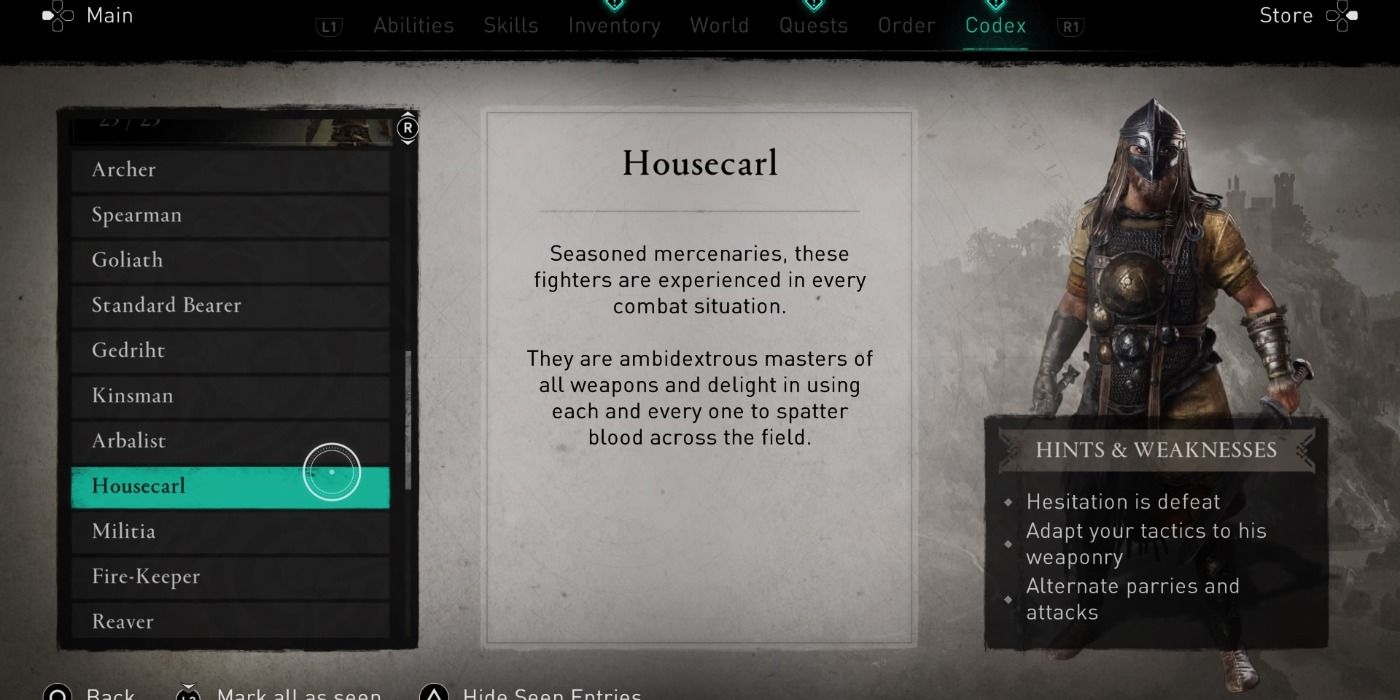 The Housecarl is the equivalent of a mercenary and they are masters of several weapons. You do not want to hesitate and parrying is your friend against this opponent, but make sure to adapt based on the weapons he chooses to carry. 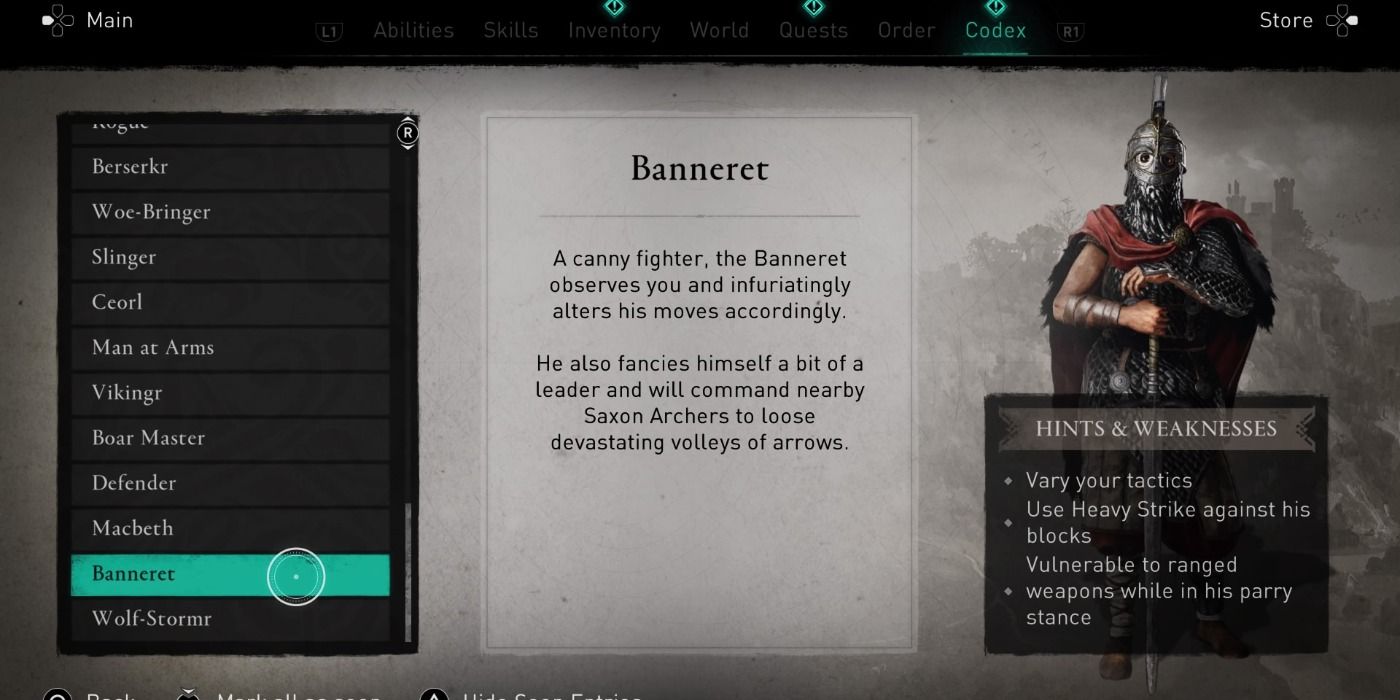 The Banneret is a lethal foe who not only wields his own weapon but has archers under his command. He usually uses a greatsword as his weapon and saving up your abilities to use on this foe is a good idea. 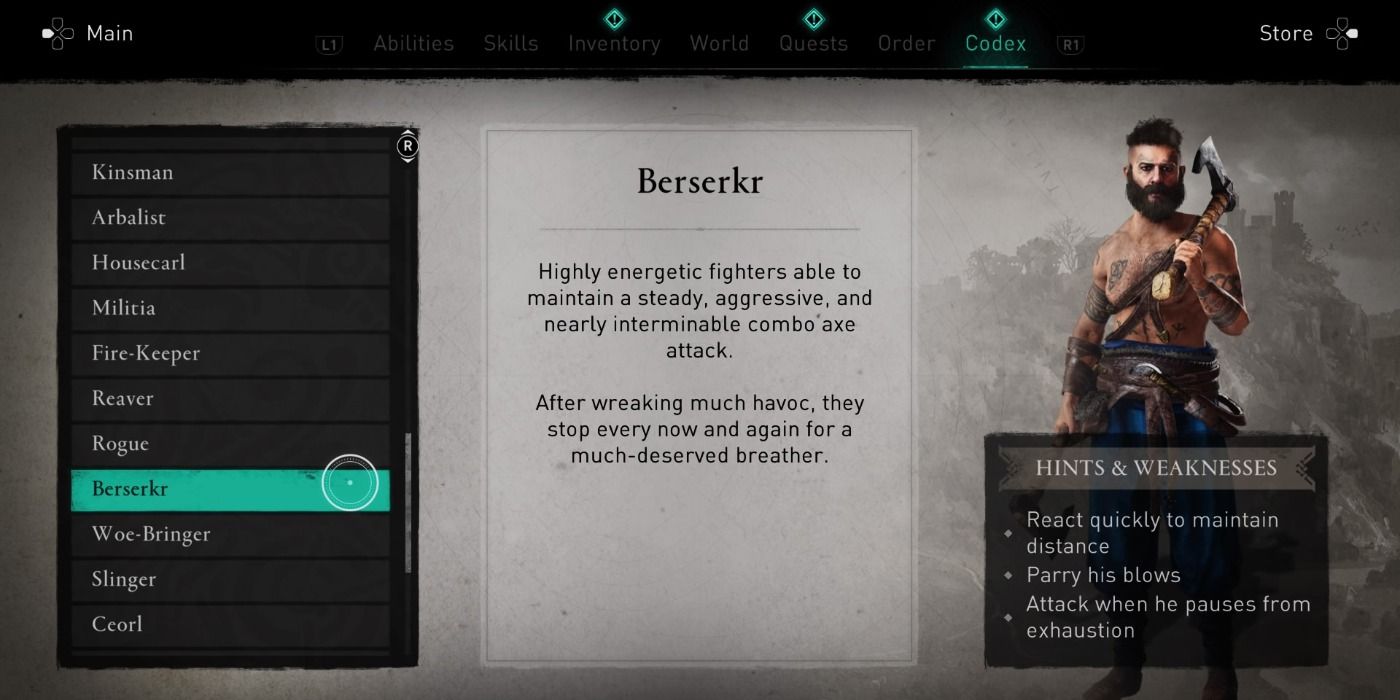 The Berserkr’s are crazily aggressive as they fly through the air while swinging their axes. He will pause when he grows tired, and this is the window when you need to attack. This opponent might have epic arm tattoos, but that doesn’t change the fact that he will try and take Eivor’s life. 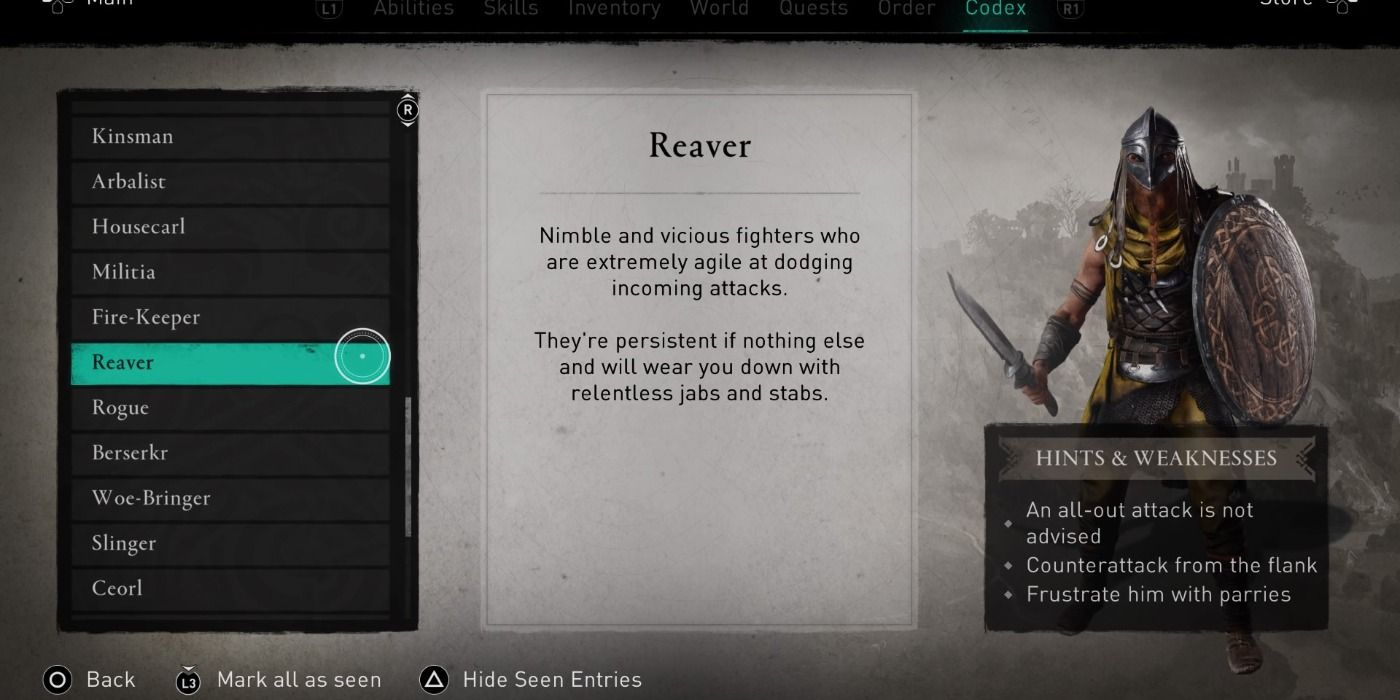 The Reaver is nimble and quick as he uses a shield to protect himself while he takes quick jabs at you. Use your parries and pull out your own shield to throw him off his game. 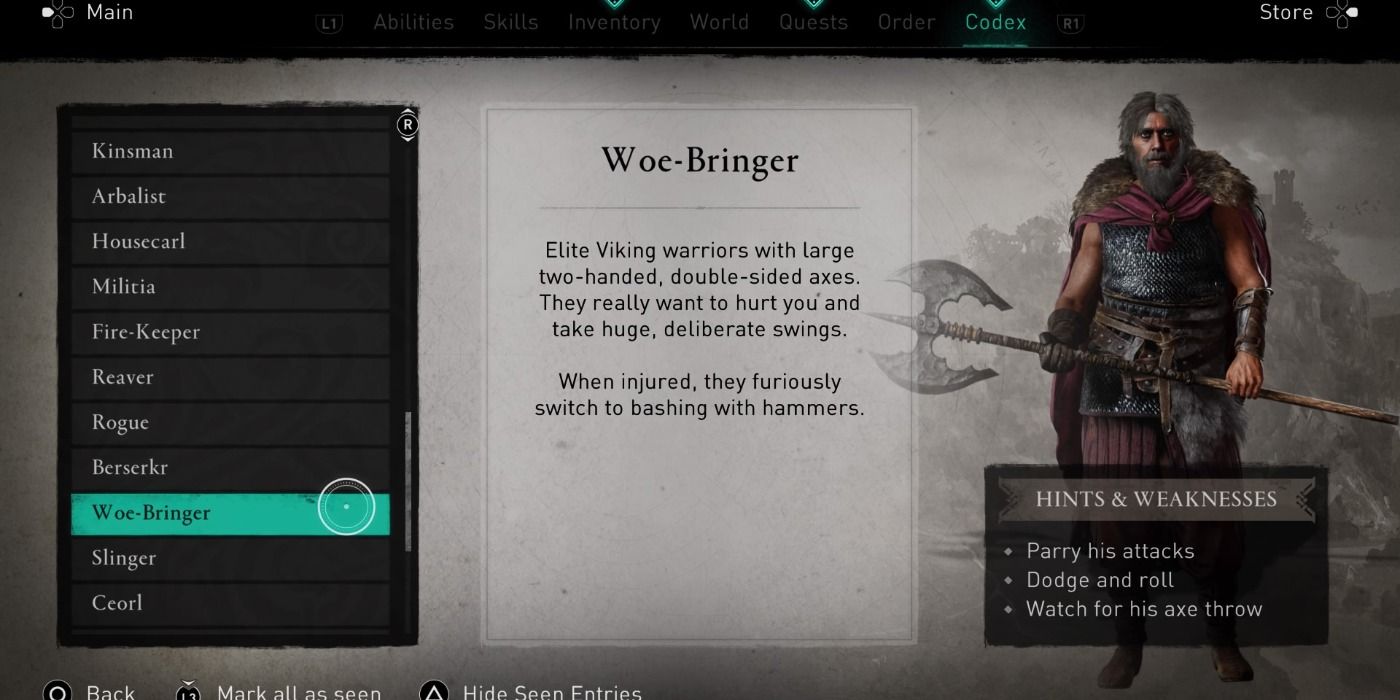 The Woe-Bringer is an elite Viking that uses a double-sided axe that deals a lot of damage if they manage to land a hit. They do have the ability to throw axes, so be on the lookout if you choose to create distance from this opponent. 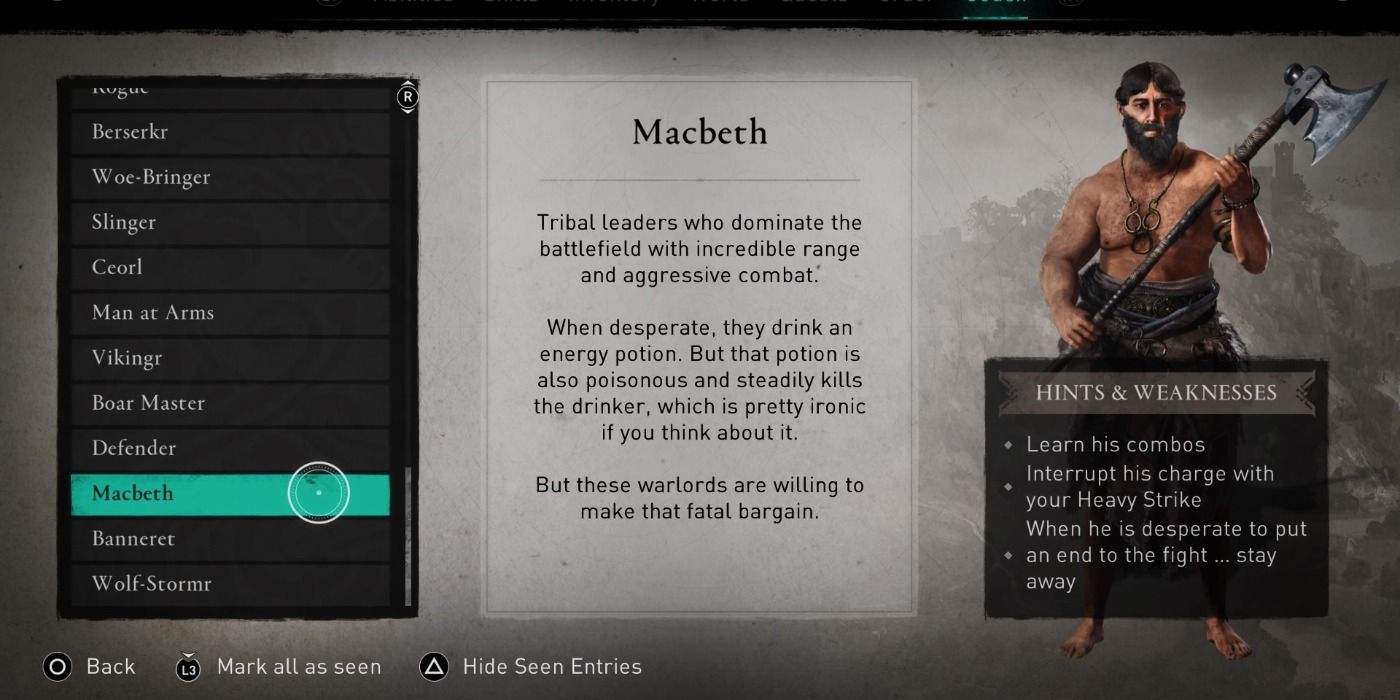 The Macbeth is found in Vinland and they are the most difficult foes to defeat. They all come running when one of their brethren is in trouble and they have an energy potion to make them even faster.

However, it is important to keep in mind that this potion is also deadly to them, so keep your distance once they drink it and hopefully they die before you do.

Next: Assassin’s Creed Valhalla: 15 Skills You Should Acquire First