One of the most ubiquitous aspects of Dead By Daylight, the chase is what the game ultimately boils down to. You find the survivor, you hit them. Rinse, and repeat until you hook them.

The longer a chase goes, the more time you waste and the more progress the other survivors make in their goals. While killers have an inherent advantage in a chase – being faster and with Bloodlust, getting faster the longer a chase goes – survivors still have plenty of tools to waste your time, from windows to pallets to simple deception. With these perks, however, you’ll be downing and hooking survivors in no time. 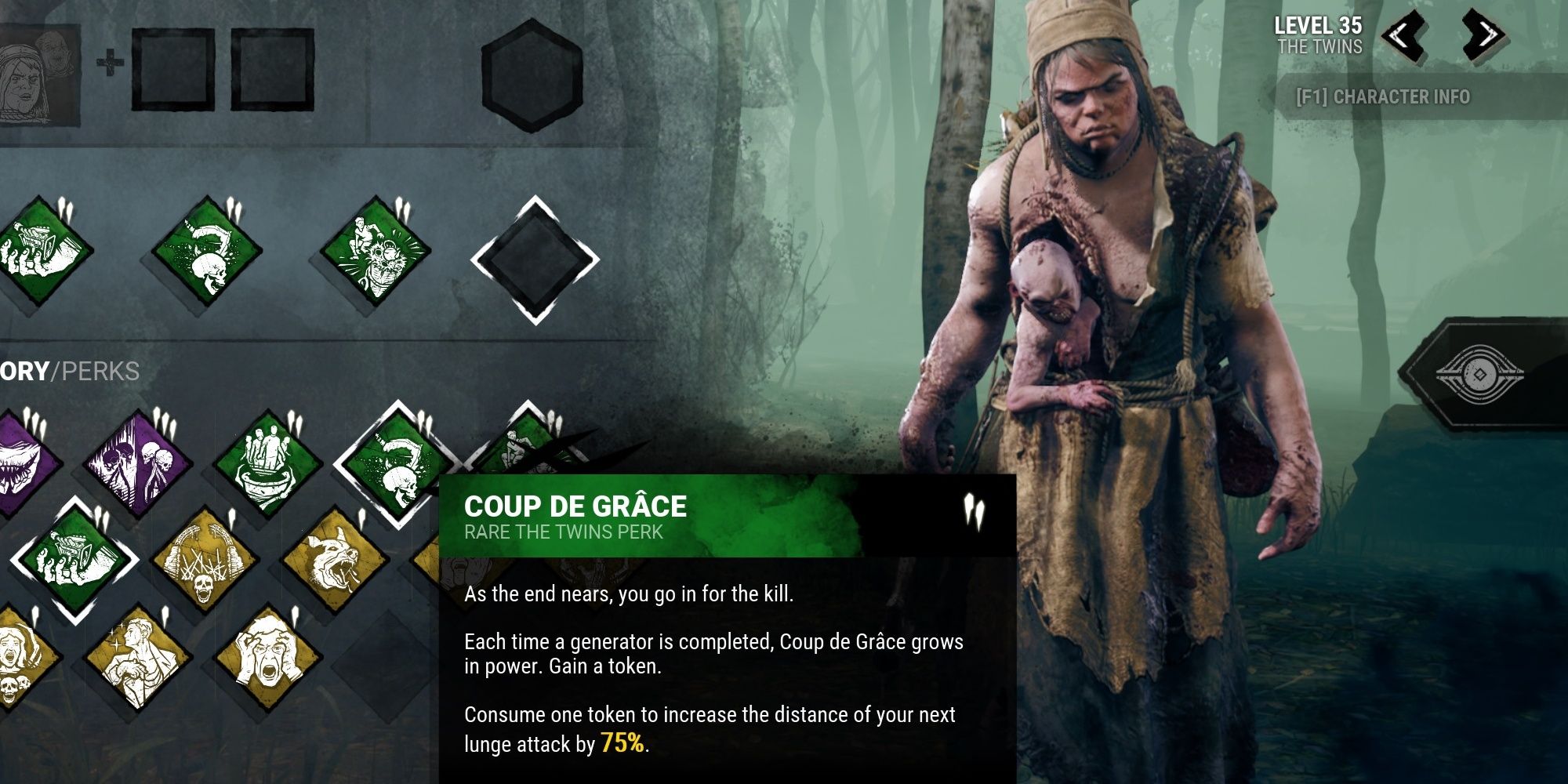 A perk that will only activate up to five times in a match, Coup de Grace can feel like an awkward perk to use but used properly, it can be devastating, especially if the survivors haven’t sussed out that you have it. This perk activates every time a generator is completed, and gives you a token that increases your lunge attacks by up to 80 percent at max rank, consuming the token in the process.

The trick to utilizing it well is to stick to short-range swings or special power attacks, neither of which consumes a token until you’re sure you can guarantee a hit. Survivors rarely expect the extra distance you get on your lunge and you may even be able to dash long enough to ignore their Dead Hard entirely. It’s a little riskier, but you could also save all your tokens for the endgame if you’re built for it. 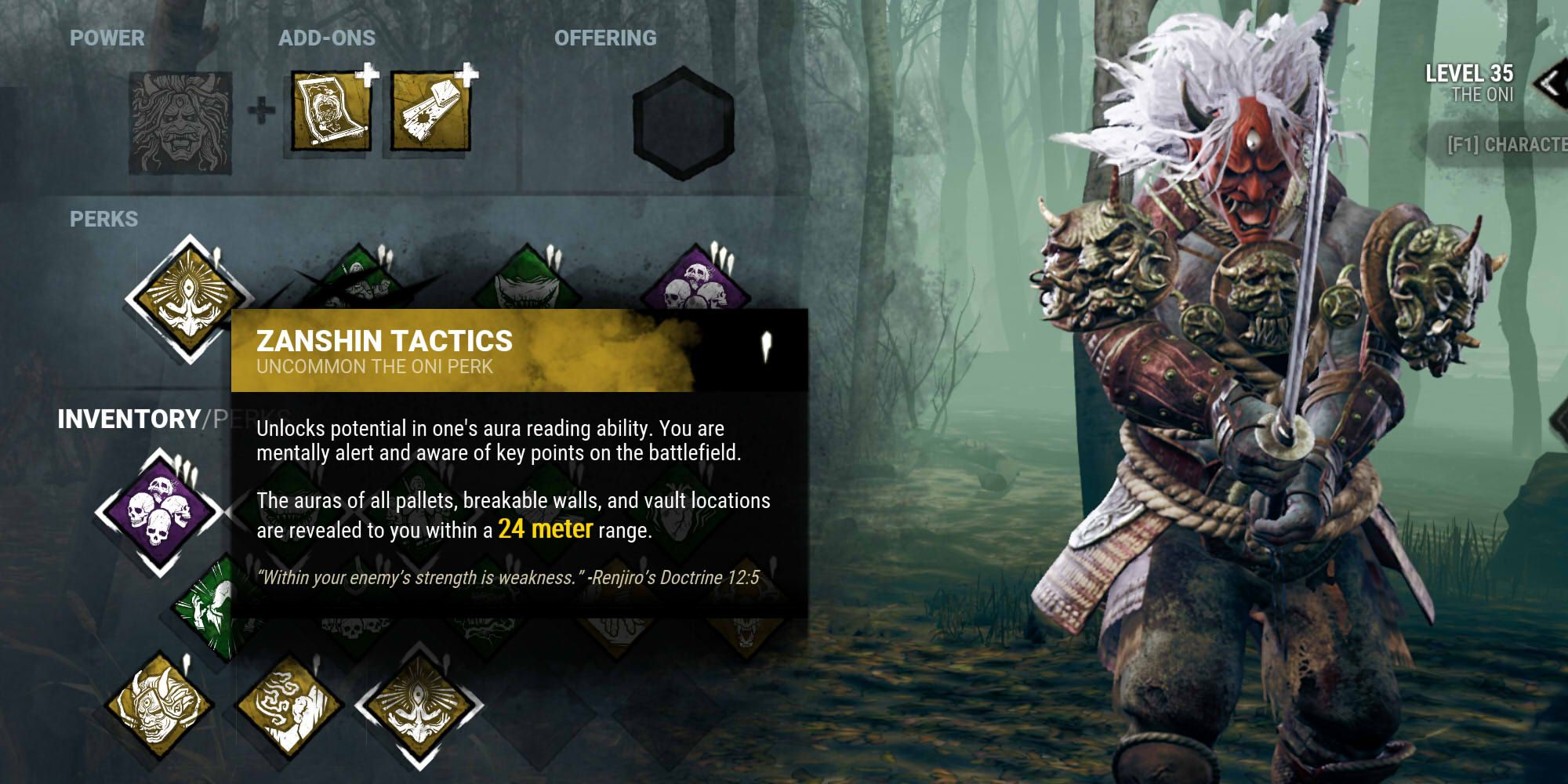 A deceptively useful perk, Zanshin Tactics shows the aura up all breakable walls, pallets, and windows within 32 meters at max rank. This perk provides valuable information that newer and even experienced players can benefit from, namely most of the possible exits a survivor could take from the chase. And, if they’re unlucky, it will show you that they have none.

Unfortunately, this perk can only tell you where survivors might go, not where they actually will go. Seasoned killers who have thousands of hours of the game, who have memorized the common tiles and have an innate sense of where everything is, gain less from this perk. 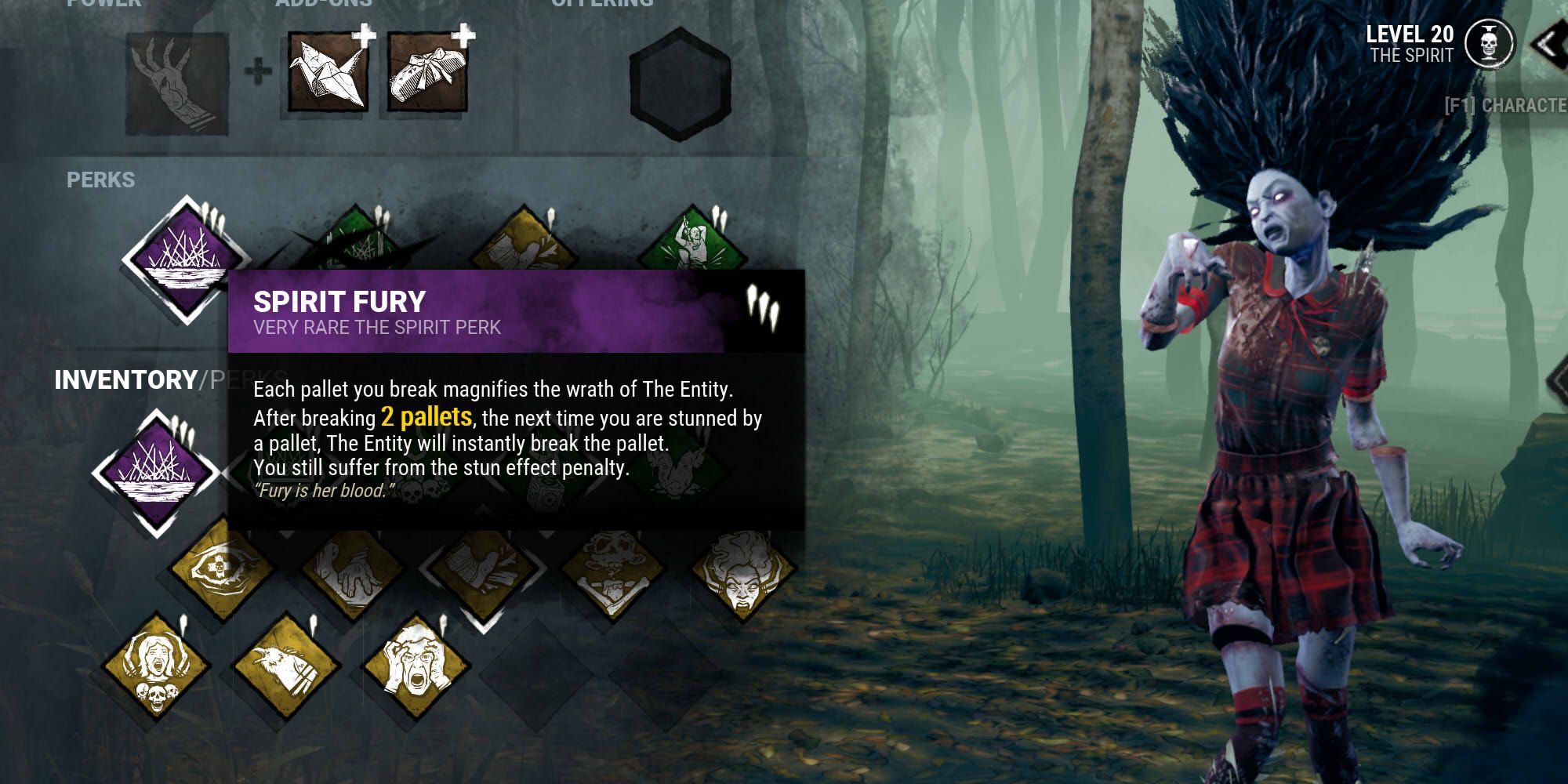 This perk takes a while to work, but when it does it feels damn good and will likely land you a hit and throw the survivor you’re chasing through a loop for good measure. Spirit Fury activates after you break a certain amount of pallets, two at max rank. The next time you would have a pallet dropped on you, it’s instead broken by The Entity. You should only run this at max rank.

Though you’re still stunned, you no longer have to break the pallet and if you run this with Enduring, the stun is much shorter, so you’re almost guaranteed a free hit after.

7 Play With Your Food 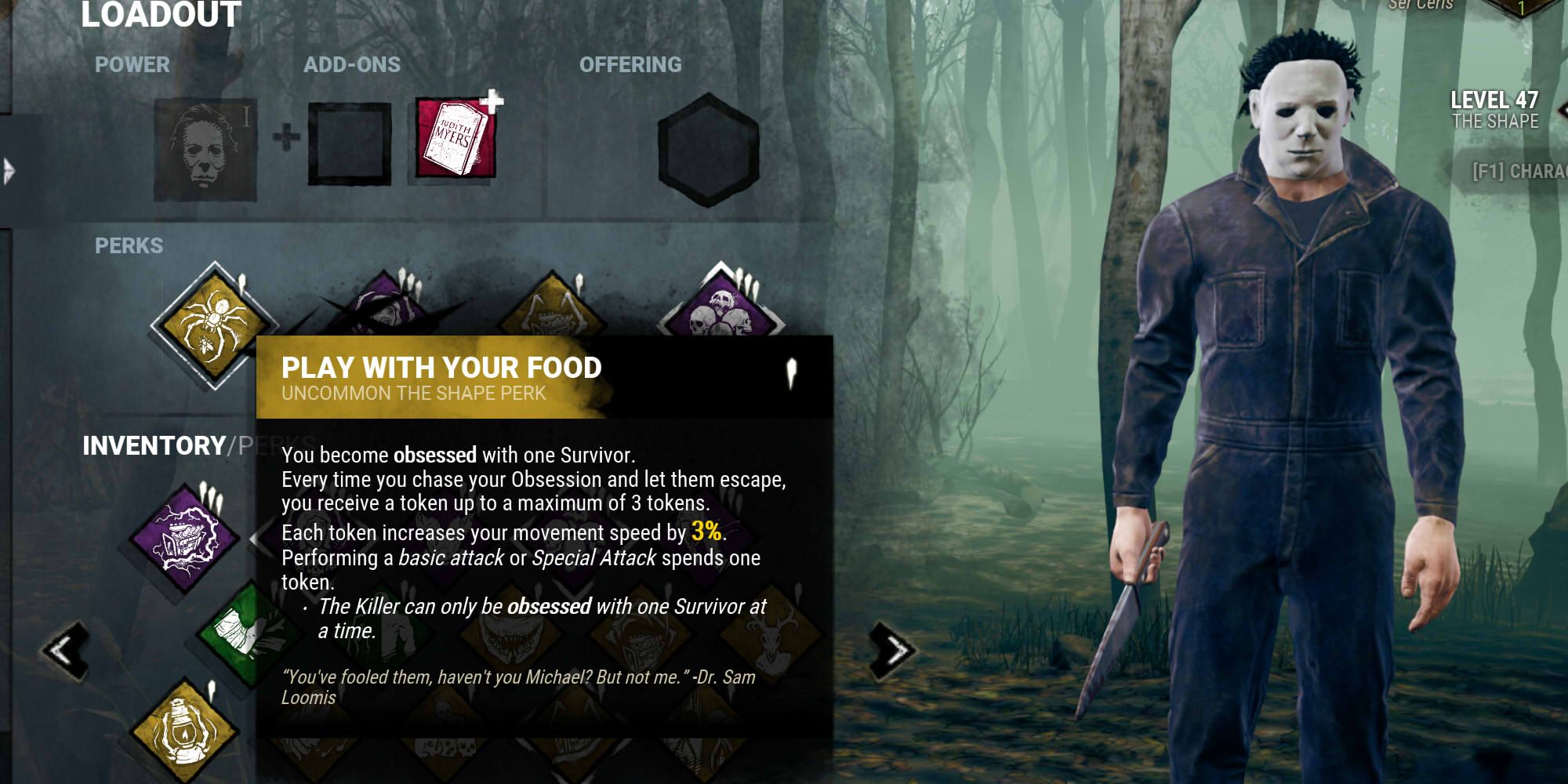 This is a tricky perk to utilize and only effective with certain killers, namely ones who can guarantee a down in one hit like The Cannibal, Ghostface or The Shape. However, this perk is nonetheless potent and can throw off even the most experienced survivors.

Play With Your Food grants you a token every time you chase your Obsession and let them escape, up to three tokens. Although the game does not tell you this, there’s a ten second cooldown between token gains. Each token gives you up to five percent more movement speed at max rank for a total of 15 percent and is consumed when you do any attack.

This can be a game-changer at all skill levels since newer survivors have to contend with a faster killer and experienced ones who gauge their distance and make their decisions based on the expectation of a killer moving at a certain speed, something you can upend with even one token from this perk. 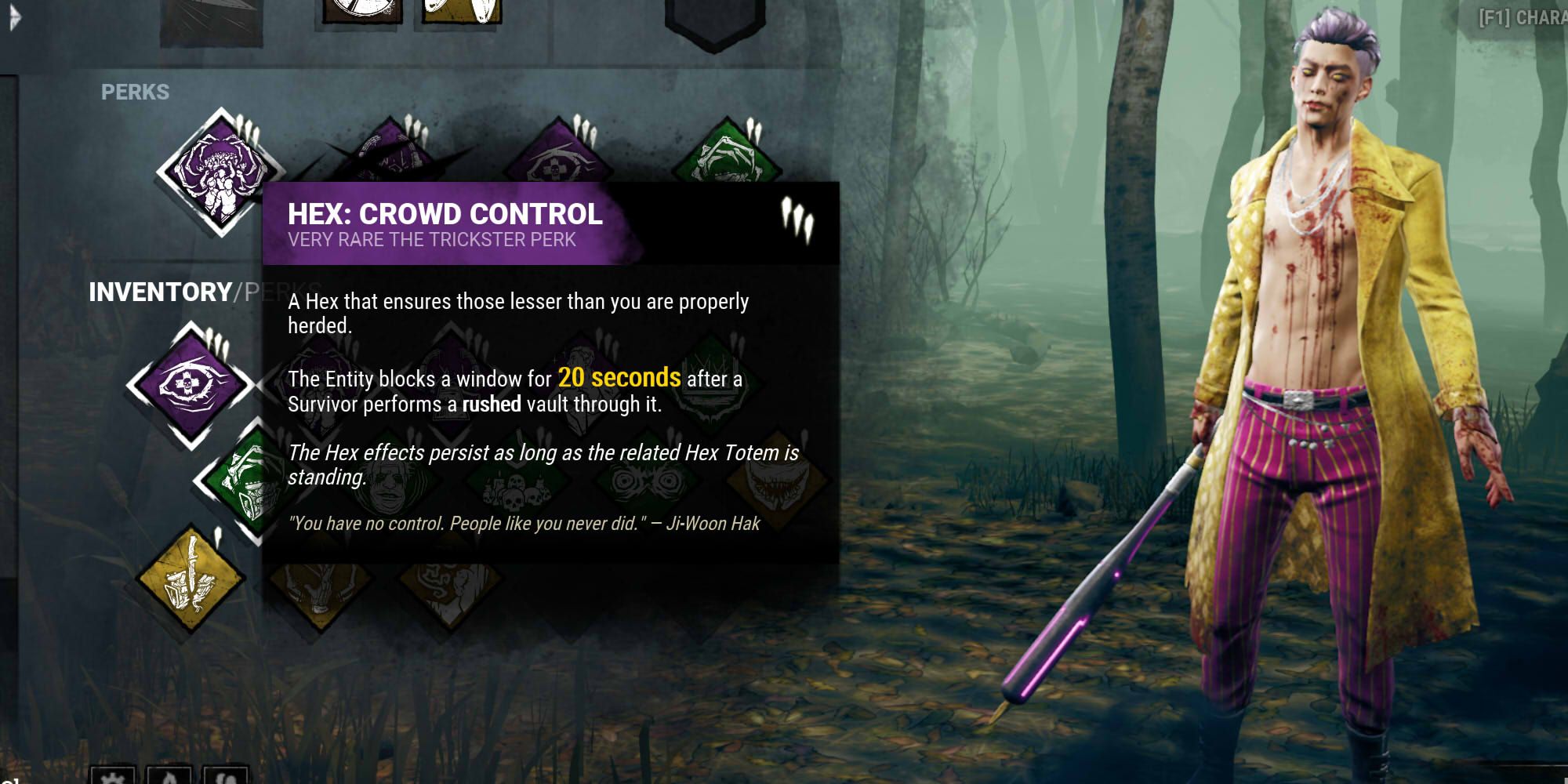 Hex: Crowd Control activates when a survivor performs a rushed vault through a window, which causes it to be blocked off by The Entity for up to 20 seconds at max rank. This is a potent ability that limits the options of your prey, possibly forcing them into a doomed loop or abandoning the tile outright, giving you plenty of time to catch them.

Unfortunately, it’s a Hex perk, so the fun only lasts until the survivors bless or cleanse the associated Hex totem, after which this perk stops working. 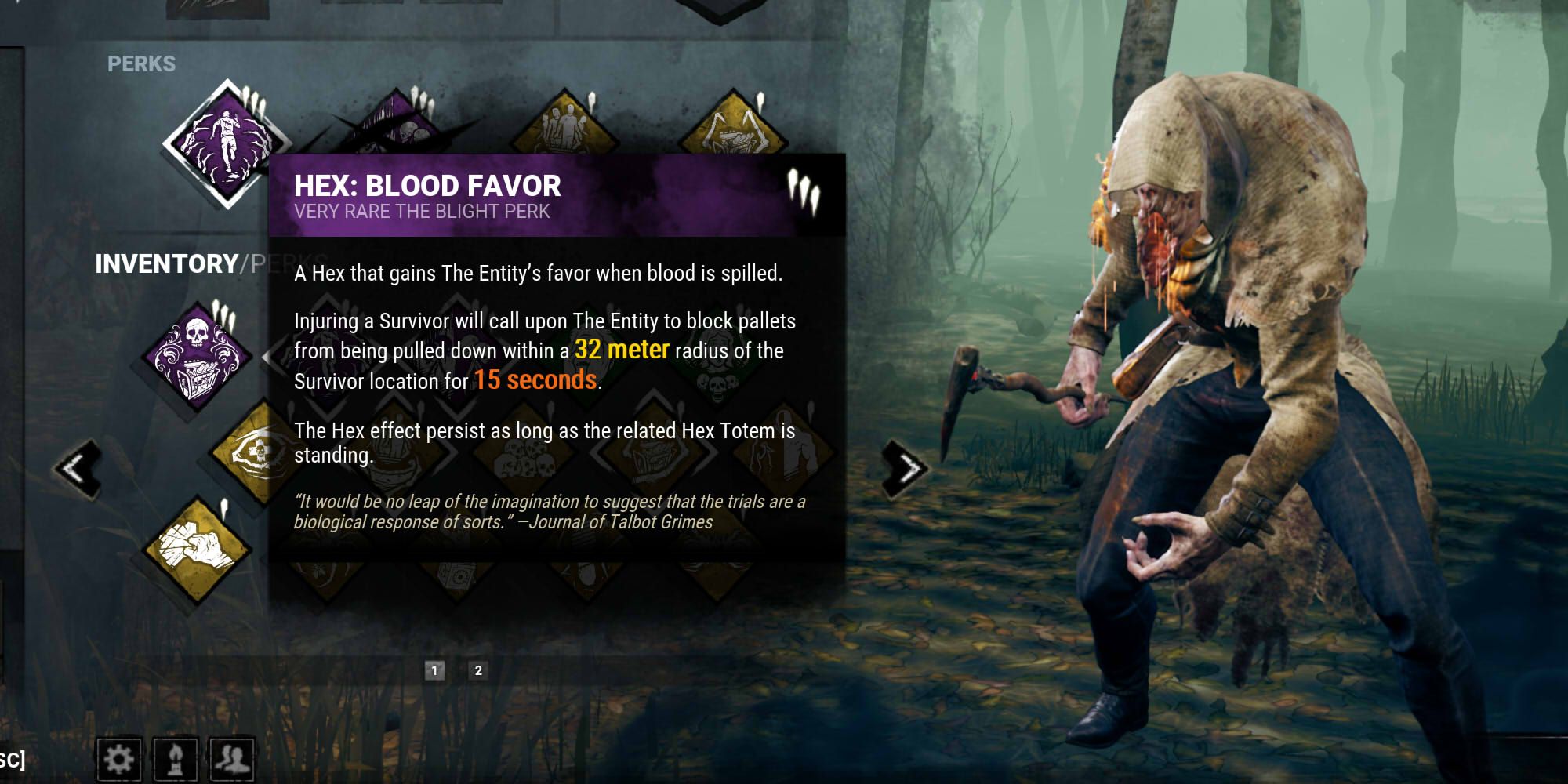 Another Hex perk, meaning once you lose its Hex totem, it’s done. This one calls The Entity to block all standing pallets within up to 32 meters at max rank, making them unable to be dropped for 15 seconds.

The value of this perk is readily apparent since dropping pallets is one of the few most potent defenses survivors have. You’ll also likely secure a down after landing a hit from the survivor failing to play the rest of the tile, having to run to a different tile or occasionally even just standing there dumbly, wondering why the pallet won't drop. 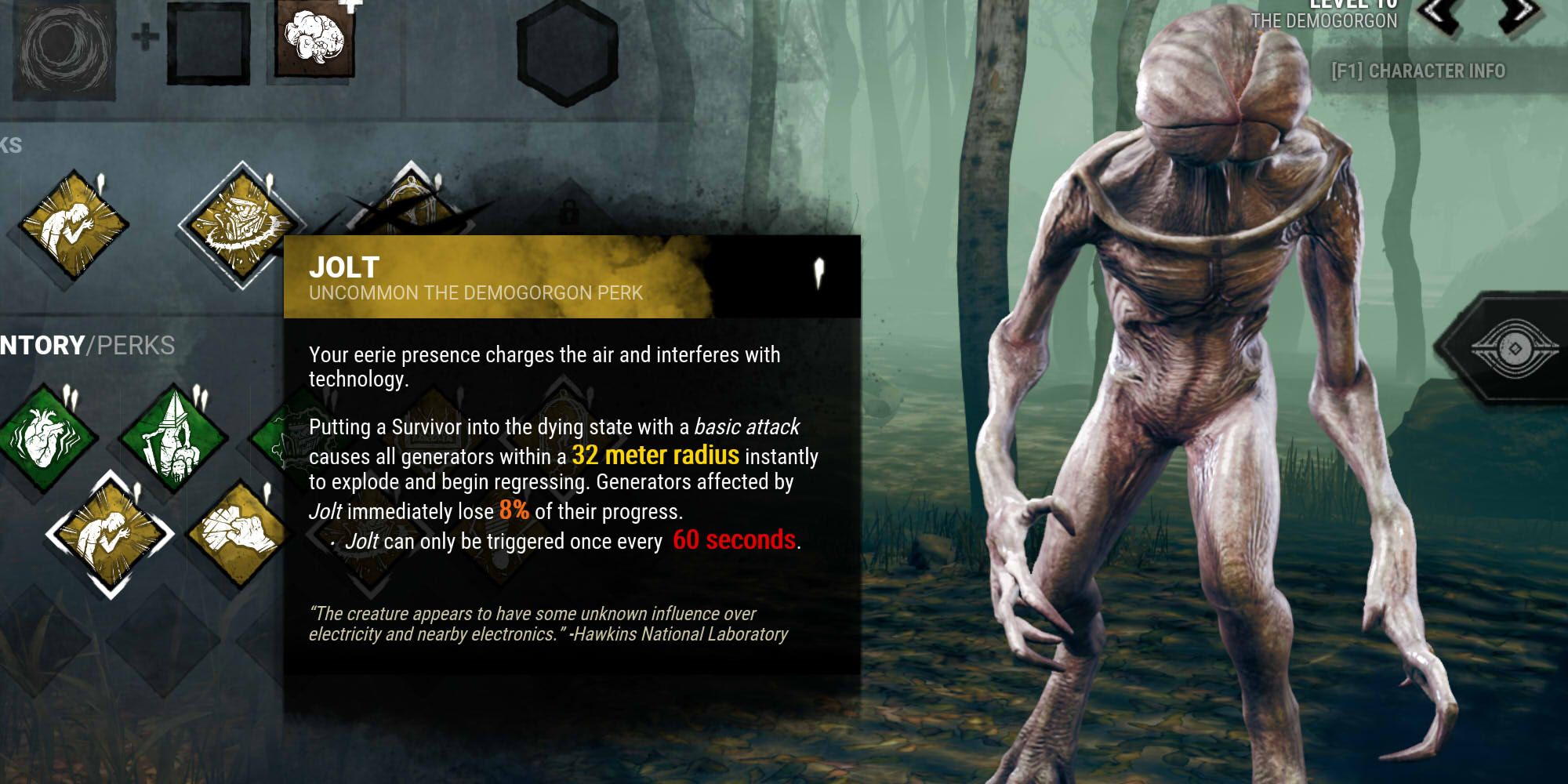 A simple and efficient addition to any chase build, this perk causes all generators within 32 meters to explode and regress by eight percent when you down a survivor with a basic attack, afterward going on cooldown for 40 seconds at max rank. Keep in mind that this only applies to basic attacks, so no Huntress hatchets, Demogorgon Shreds, etc.

Though this perk doesn’t help you in a chase per se, it’s still a powerful choice and rewards you well for getting a down. This works well in most chase builds since it gives you the value of regression perks without actually having to stop and kick a generator and go start another chase instead. 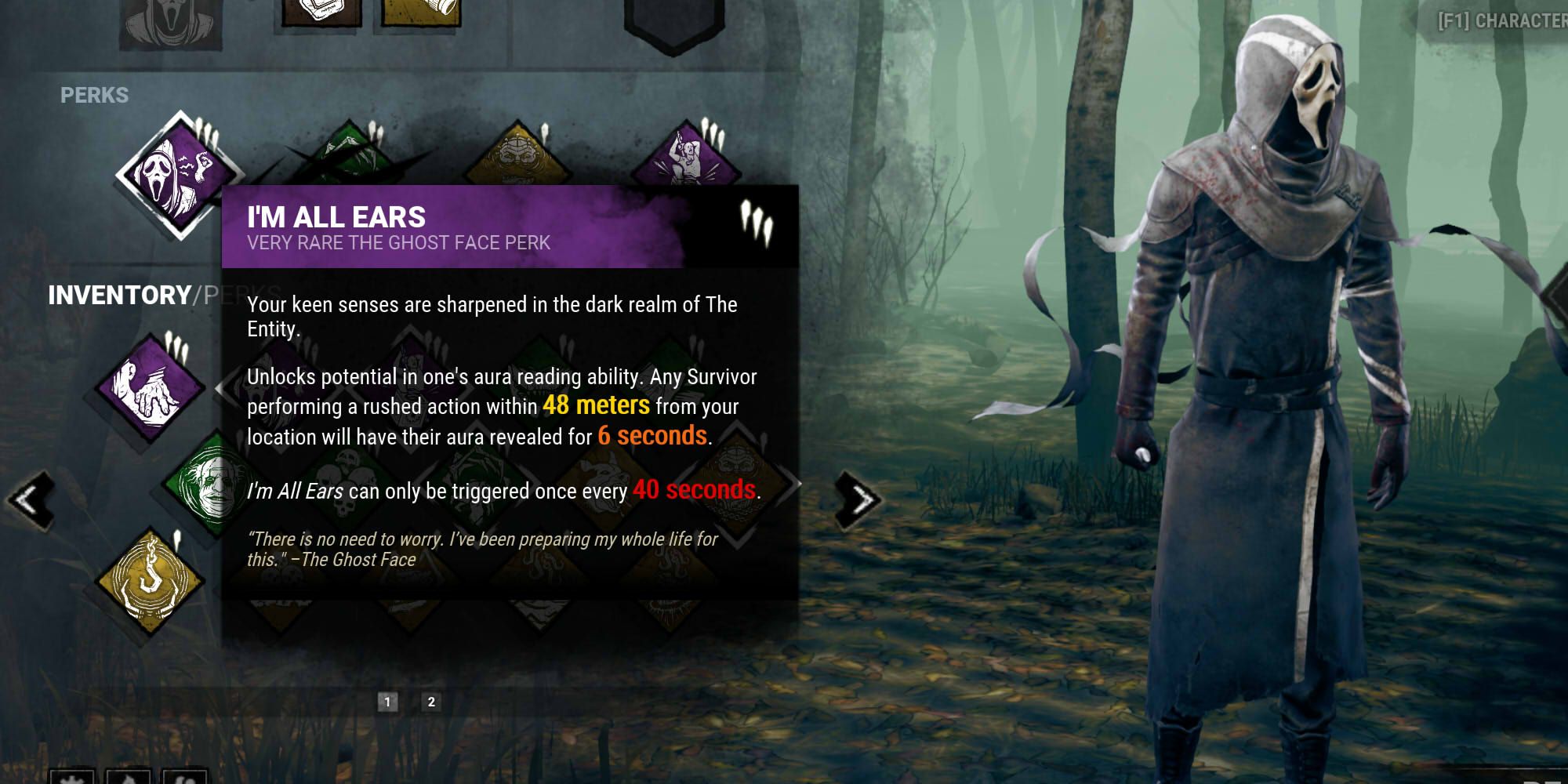 I’m All Ears gives you vital information at the cost of an oppressive cooldown, but if it nets you a down, then it’s worth it. The perk highlights any survivor dropping a pallet or vaulting a window for six seconds and then goes on cooldown for 40 seconds at max rank, giving you plenty of time to head them off or get in their heads, and then get a hit in.

Even if you can’t immediately seal the deal or even land a hit, having this information can often mean the difference between a long chase and a short one. 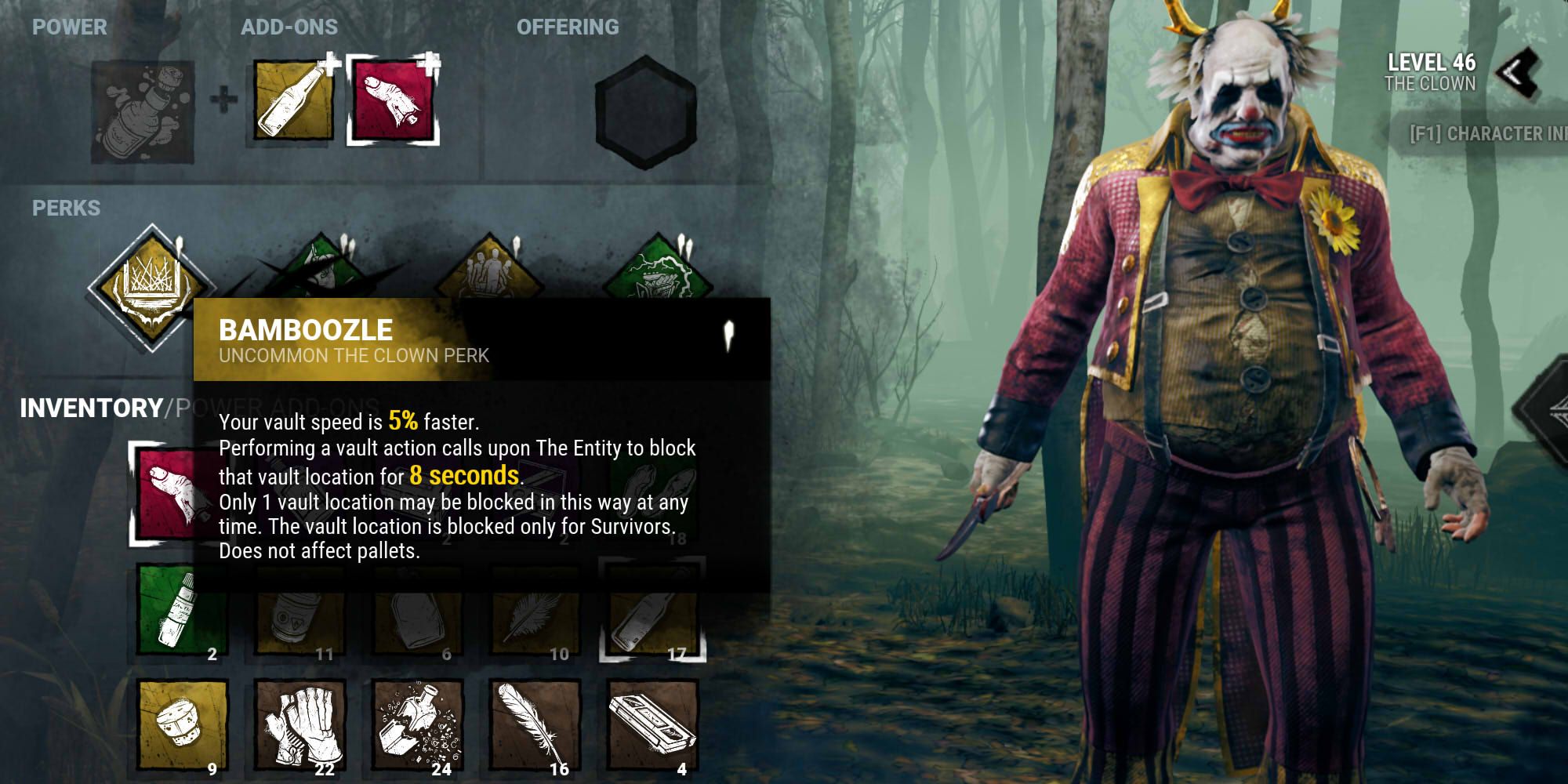 Bamboozle allows you to vault windows up to 15 percent faster and then calls upon The Entity to block that same window for up to 16 seconds at max rank.The strongest component of this perk is the window-blocking and unlike Hex: Crowd Control, there’s no Hex totem to worry about.

Don’t let the small number on the vaulting component fool you though, since the faster vault can sometimes catch survivors unaware, especially since they might unknowingly try to loop you through the now-blocked window. Also, the bonus speed compounds with naturally fast killer vaults like The Shape’s Tier 3 Evil Within or The Legion’s Feral Frenzy.

1 Save The Best For Last 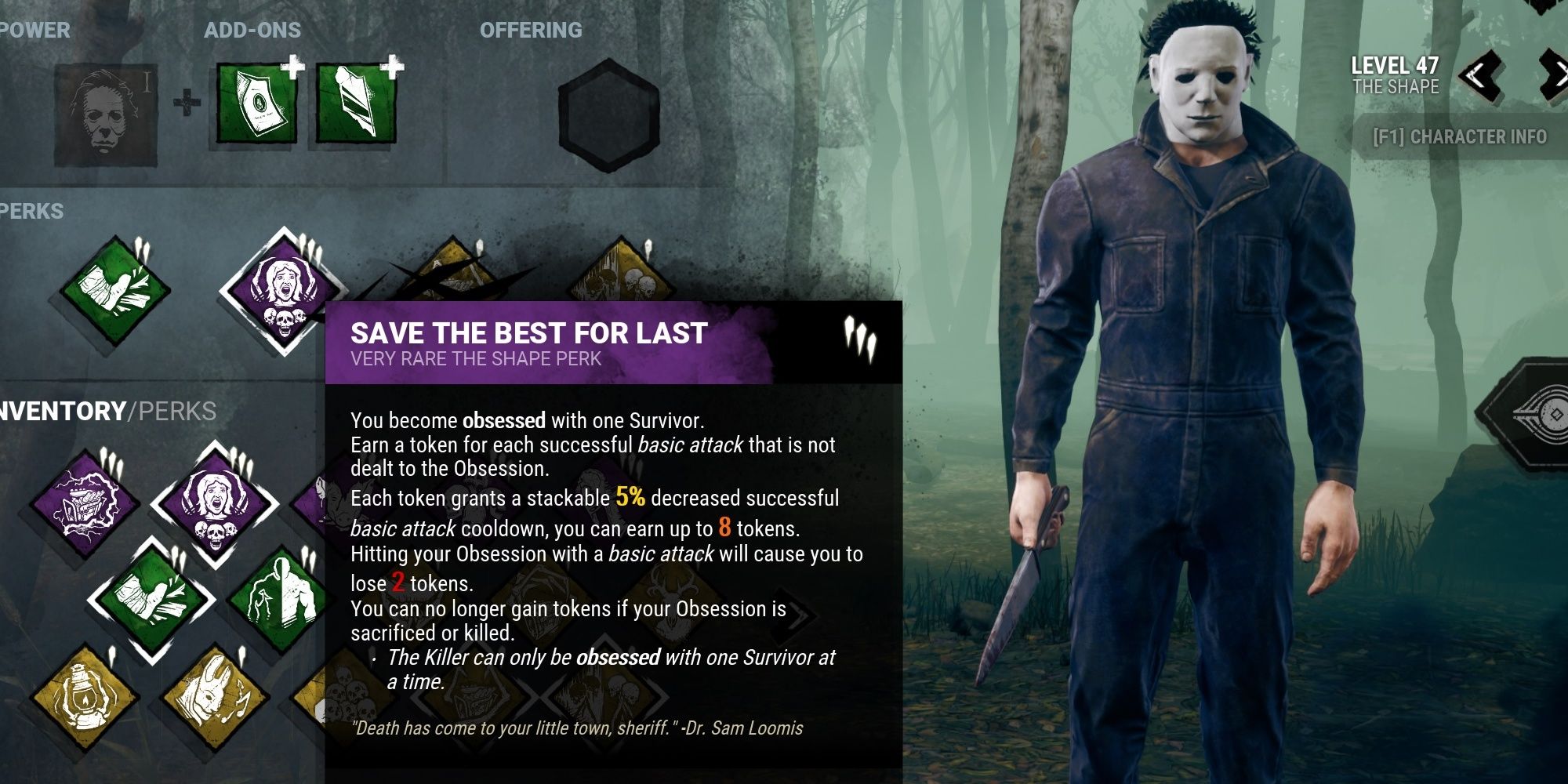 This perk gives you a token for landing a basic attack on anyone except your Obsession, giving you a five percent cooldown reduction on successful attacks, stacking up to eight tokens for a total of 40 percent. However, if you basic attack your Obsession, you lose a certain amount of tokens, down to two at max rank. You no longer gain or lose tokens if your Obsession dies.

Though occasionally unwieldy, Save The Best For Last is fantastic for killers who have to use a basic attack to get their hits in, since the shorter cooldown on successful attacks means that chases can end up much shorter, even with the survivor speed boost on being hit.

Obviously, you want to avoid hitting the Obsession with this perk active, but the tokens are only lost if you use a basic attack. Damaging your Obsession in other ways, like Demogorgon’s Shred, Trapper’s traps or Plague’s Vile or Corrupt Purge won’t cost your tokens and if you don’t want to watch them anymore, you can finish off your Obsession.