One of the most eclectic games in the Capcom Fighting Collection is Super Gem Fighter Mini Mix (aka Pocket Fighter). This spiritual successor to Super Puzzle Fighter 2 Turbo pits chibi versions of fan-favorite Capcom characters against each other in gem-fueled battles.

At first glance, Pocket Fighter may come off like a gimmick fighter. However, under its campy veneer is a deep fighting system that successfully blends elements from various series, including Street Fighter, Darkstalkers, and even Red Earth. Once you uncover the parallels between Pocket Fighter's mechanics and its predecessors, your understanding of the game will increase exponentially. 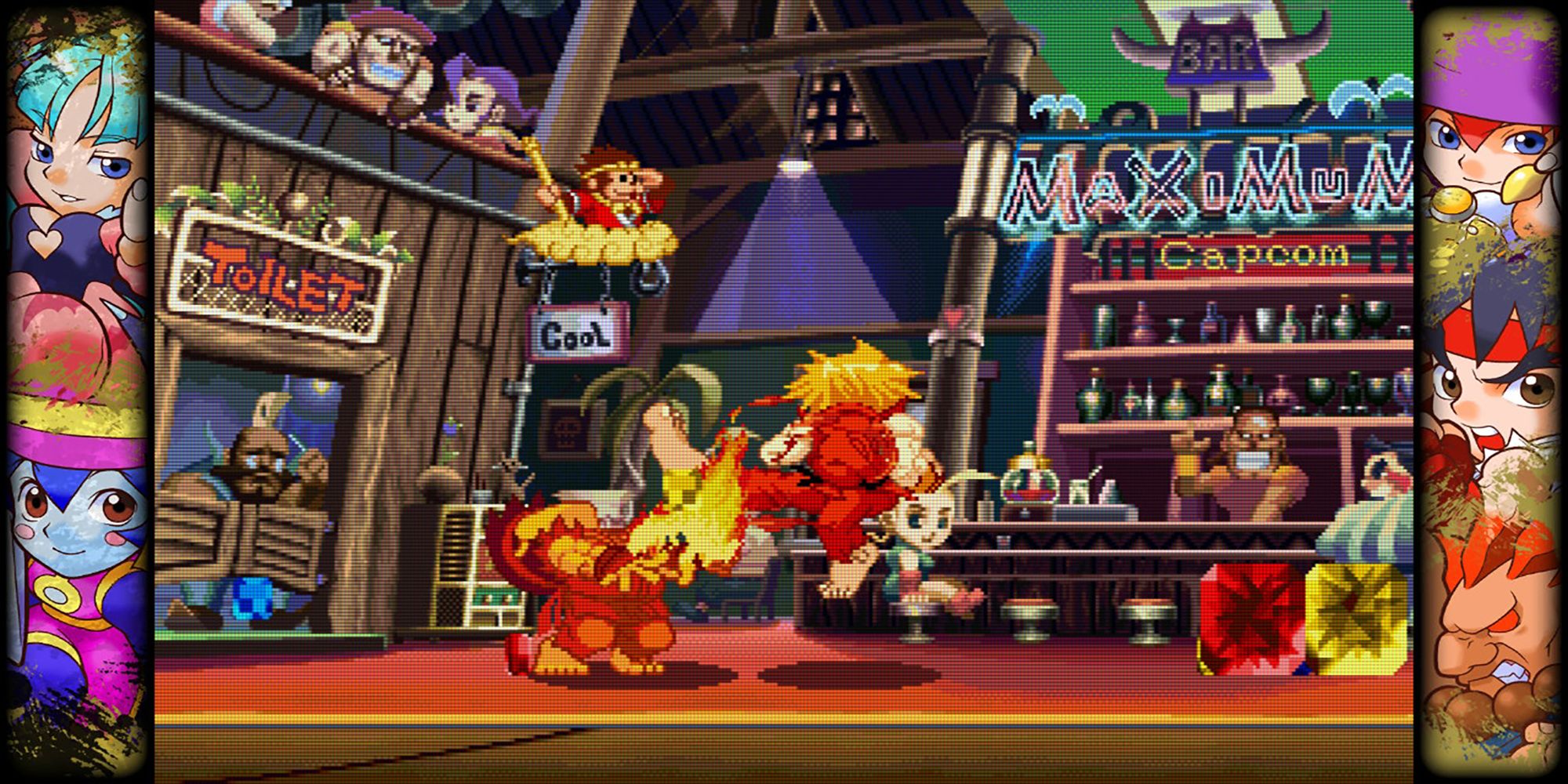 If you look at the bottom of the HUD, you'll see three colored gauges: red, blue, and yellow. Each gauge refers to one of your fighter's special moves. There are also red, blue, and yellow gems in the game. The gauge corresponding to that gem's color increases when you consume a gem. When one of these gauges reaches a new level, the strength of its assigned special move increases.

So, how can you collect gems? You can collect gems by landing attacks on opponents or opening treasure chests. If this concept sounds familiar, it's because it's the same way a player gains experience in Red Earth.

Furthermore, improving your attacks is not the only reason you should horde gems. If your opponent collects gems before you do, they'll gain improvements that incline the fight in their favor. 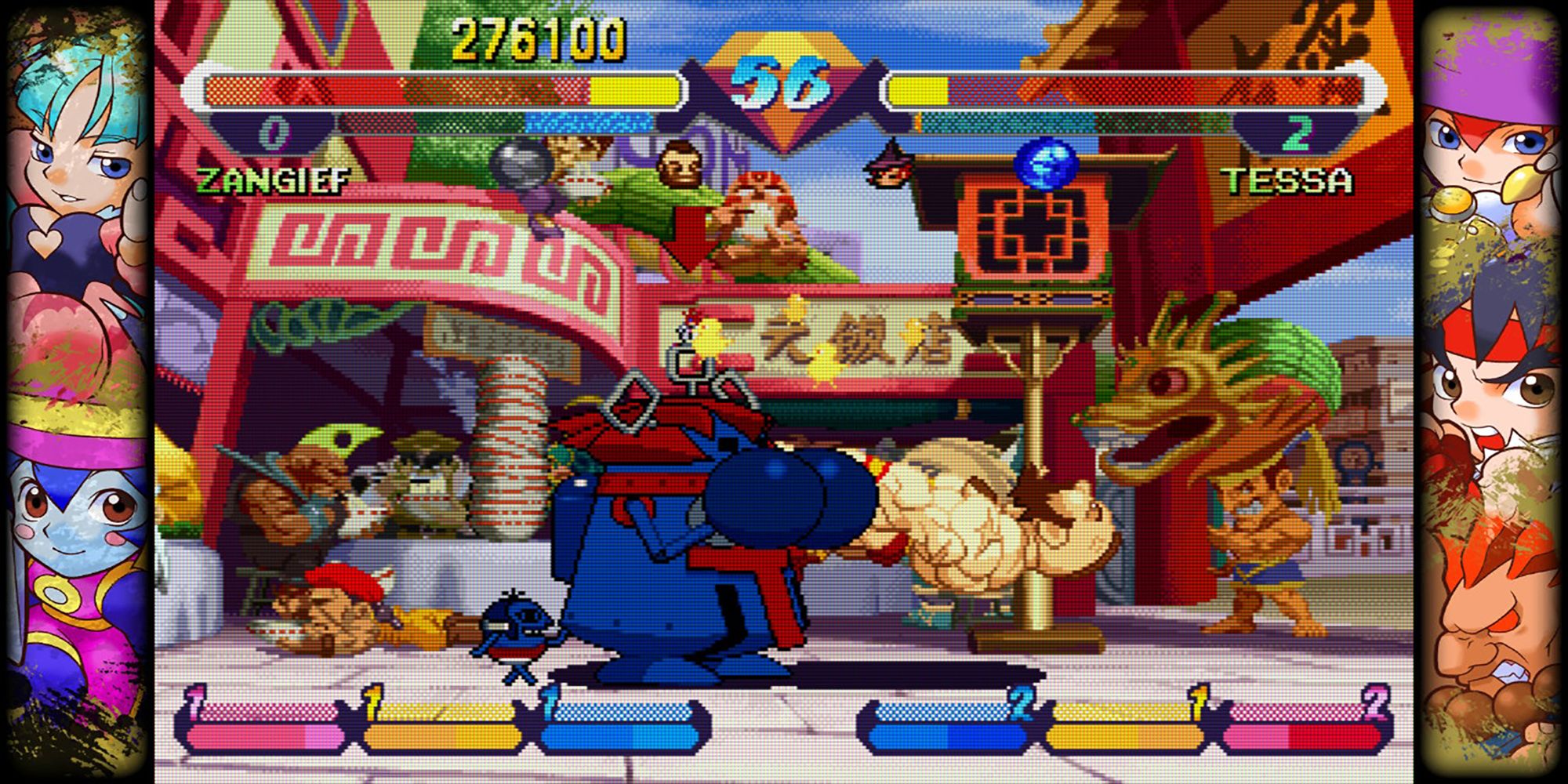 As we mentioned before, Pocket Fighter is campy. For instance, this game is so campy that its characters change costumes mid-combo. These attack sequences are called flash combos, and they play much like auto-combos you may have come across in anime fighters like BBTAG or Persona 4 Arena. You could also describe this mechanic as a simplified version of Darkstalkers' chain combo system.

To perform a flash combo, you must start with the punch button. Then, you can string together any combination of punch and kick buttons to form the combo. Different button combinations activate new attacks and combo finishers. While some of these attacks are straightforward, others will feature hilarious jokes and Capcom references.

For instance, one of Chun-li's most notable flash combos in the game features her in Jill Valentine's STAR attire firing shotguns and rocket launchers. You will discover an abundance of eater eggs like these as you play through each character's flash combos.

However, discovering all your fighter's flash combo has a practical advantage too. Knowing what kind of attacks each button combination performs is helpful. In particular, learning which combos end with normal attacks and which end with guard crush moves is incredibly beneficial.

If Your Opponent Keeps Blocking, Try A Guard Crush 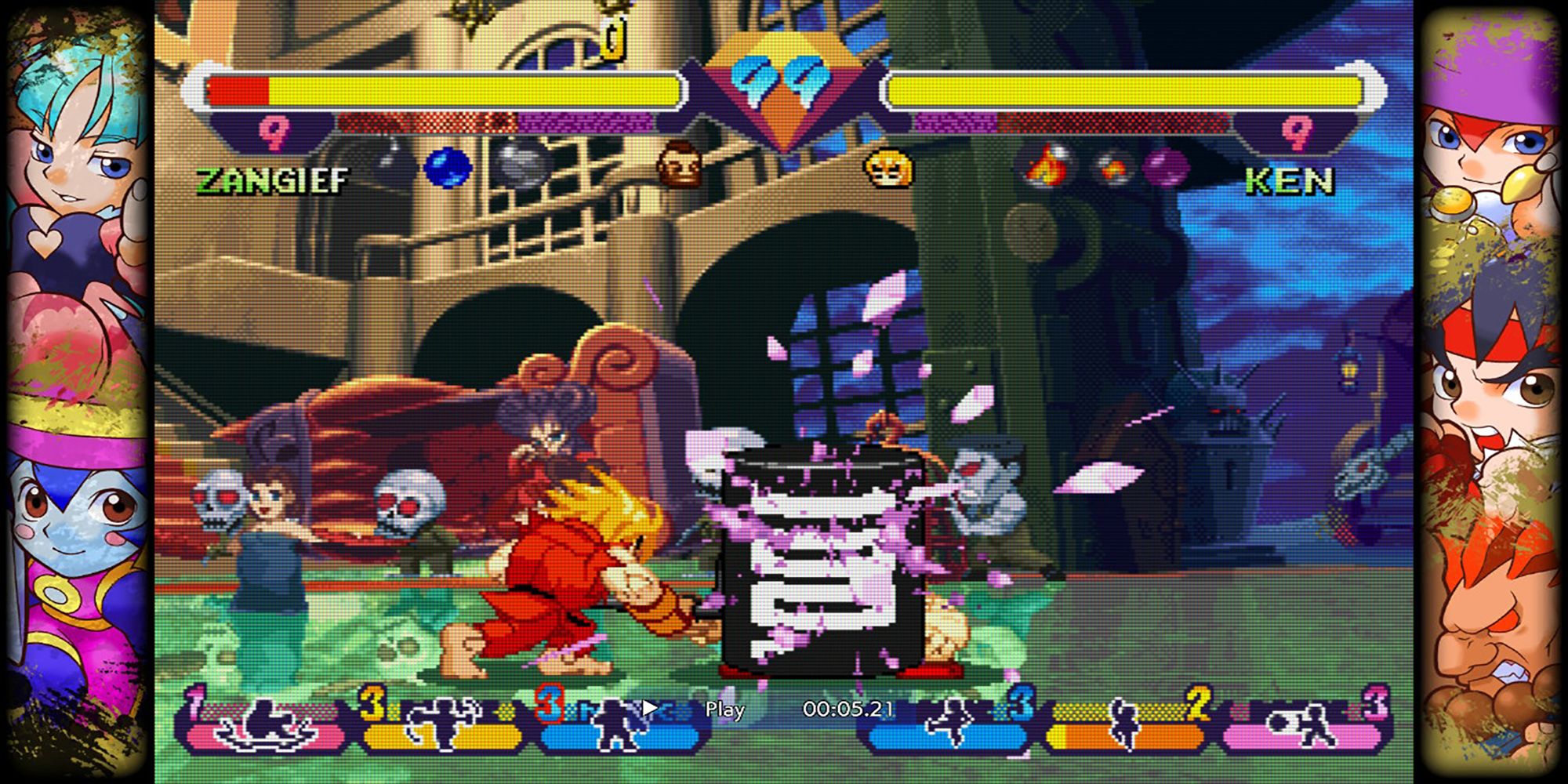 Fighting against a very defensive opponent can become a massive frustration, especially if your opponent punishes an unsafe move on a block. So what can you do to break their guard and bring the pain? One practical choice is a Guard Crush.

Guard Crushes are straightforward, chargeable, unblockable attacks you can perform by pressing the Special button. Pressing the Special button along with a directional input performs additional guard crushes that your character can do. If you successfully land a guard crush, you will break an opponent's guard and send them flying across the screen.

While a guard crush is an easy fix in a rough situation, it's also risky. Your character is vulnerable to a counter during the attacks start-up frames. So the longer you charge the attack, the more opportunity your foe has to interrupt it. Plus, if you land a guard crush, you still must avoid your opponent bouncing around the screen. If they collide with you, you'll get taken out with them.

Additionally, if an enemy attempts a Guard Crush on you, you can escape the attack by performing a well-timed Guard Counter (⬅️+Special). If the counter lands, you'll deflect their attack and be in a position to fight back. 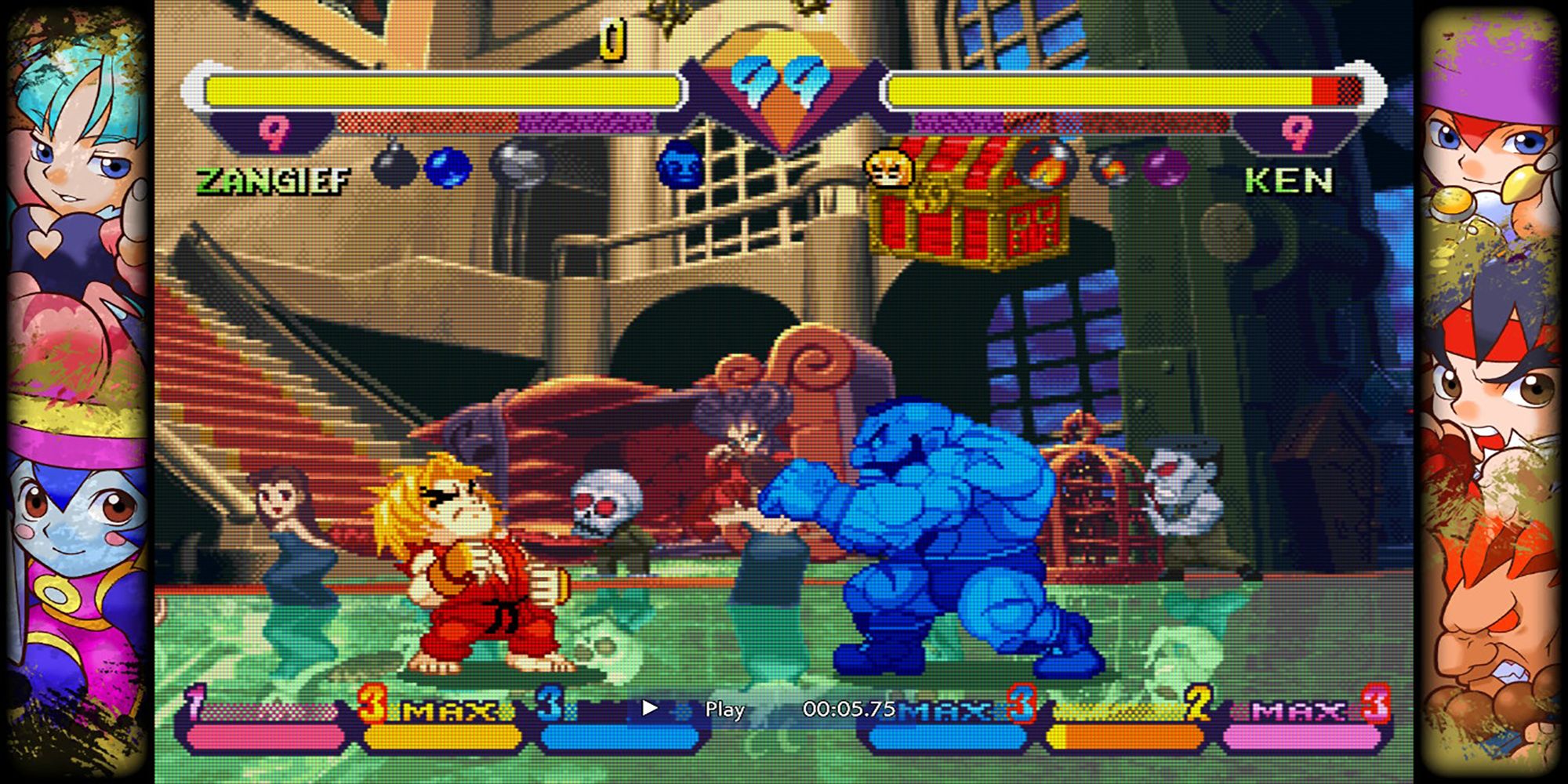 Suppose you are in the opposite situation, and your opponent is pressuring you into a corner. In this case, a Guard Cancel (➡️+Special [during block]) is your best bet. Guard cancels cost one super meter to perform. However, they are far more forgiving to achieve than a Guard Counter.

If a Guard Cancel lands, you'll see similar animations as a Guard Cancel. Your opponent will get pushed back, and you can lean into a combo against them. 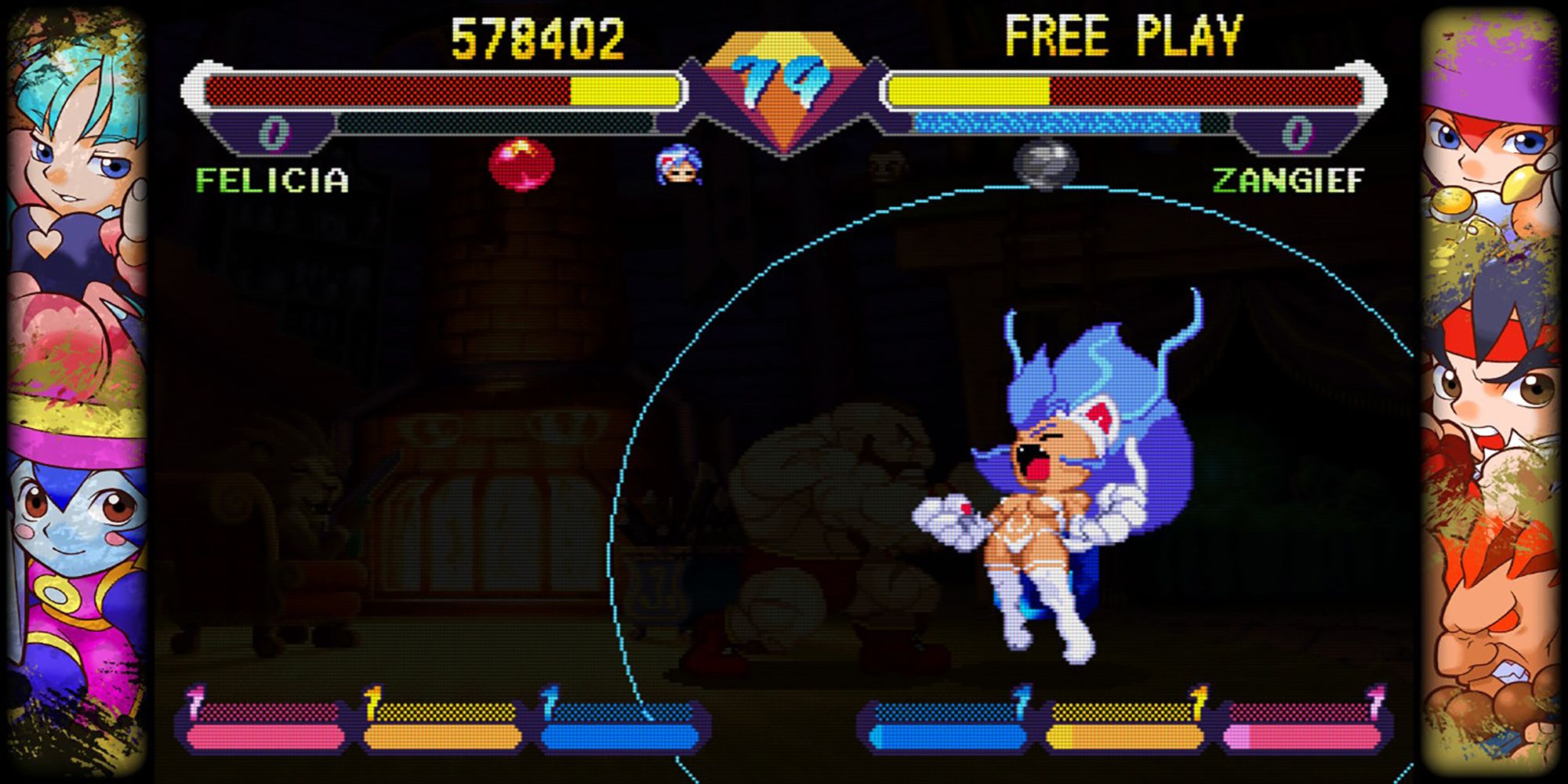 Another defensive option at your disposal, although much riskier, is a Mega Crush (Punch+Kick+Special). This attack pushes enemies away from you at the cost of all your meters (gem and super). If you're looking for a modern parallel, we consider this mechanic similar to a Burst in Guilty Gear.

Mega Crush does not apply much damage. Furthermore, your fighter will expel large gems throughout the playfield. Therefore, if you do employ a Mega Crush, you need to find a way to pressure your opponent quickly and keep them from stealing your expelled gems. Otherwise, you'll become further disadvantaged. 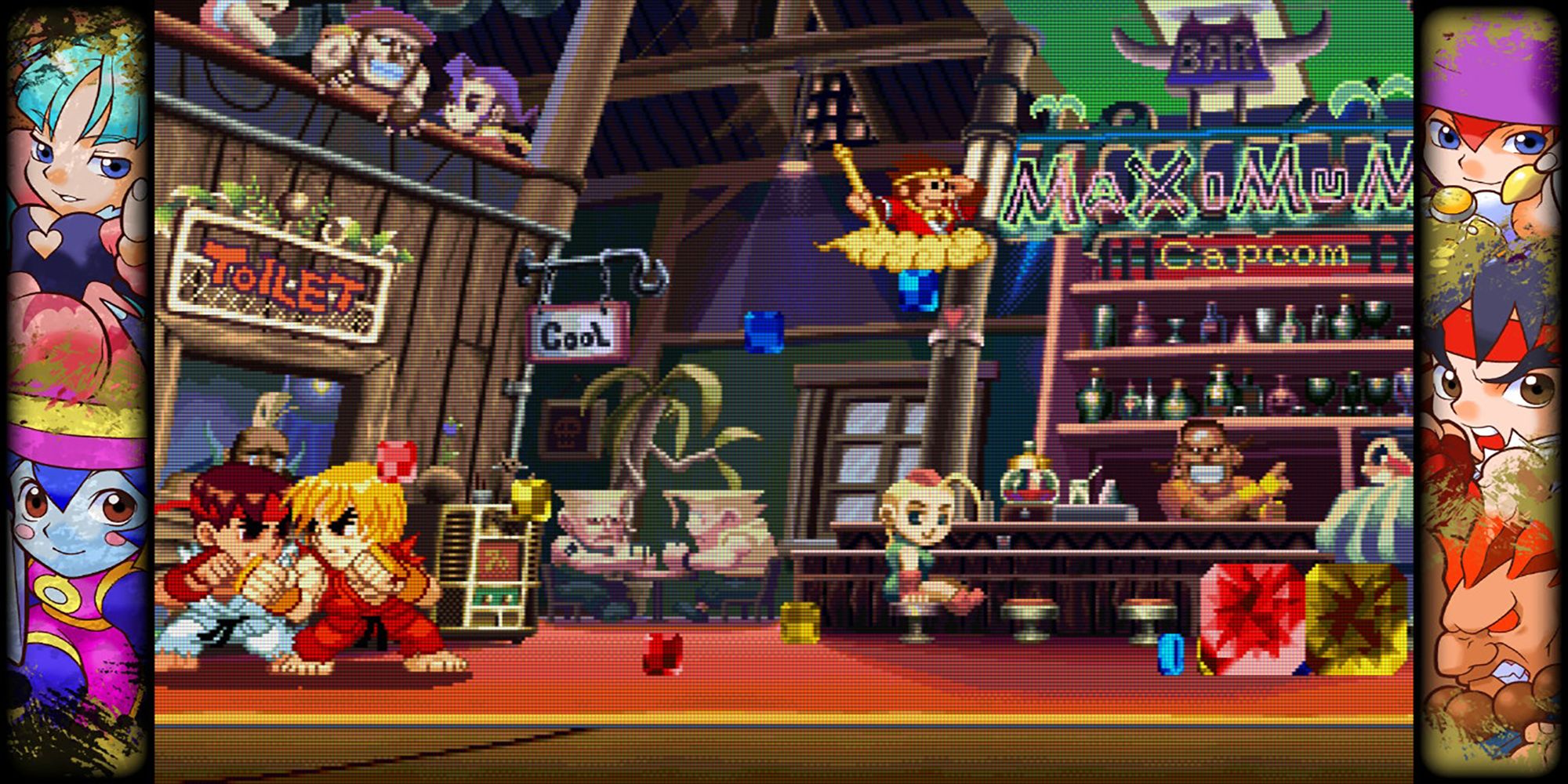 There are so many game references in Pocket Fighter. For example, many fighters' endings feature fan-favorite character cameos. Plus, locations and characters will appear in various game stages. However, one callback almost went over our heads, literally.

If you hear a faint buzzing sound, check above your character. You'll likely see Son Son, or one of the other characters from the titular eighties arcade title, passing by on a floating cloud. If you attack the cloud, you'll gain power-ups, like item orbs that can assist you in battle.

However, if you see a red cloud hovering above you, beware! This red monster, Kaminari, electrocutes any fighter who touches him. While the player is incapacitated, their opponent will likely reap the benefit of collecting the diamond that the monster drops afterward.

Simple And Normal Mighty Combo Commands Have The Same Results 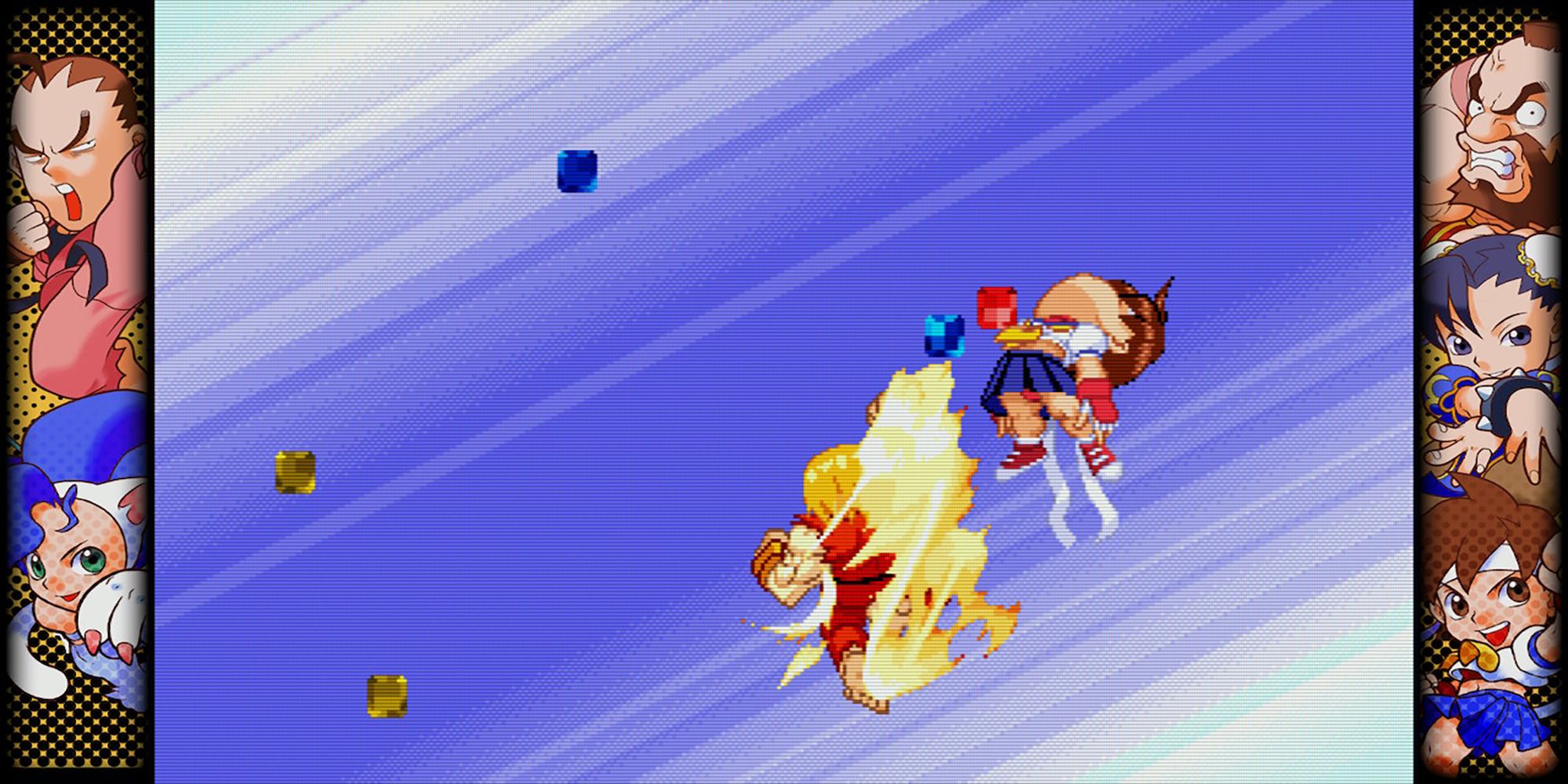 Therefore, we were curious if using the technical input of a mighty combo made a significant difference over using the simplified input. However, after testing both inputs out in training mode and researching additional sources, we can confirm that technical and simplified inputs do not affect mighty combos. (Other than bragging rights.) Both inputs result in the same animations, damage, and meter spent.

One exception to this rule is Akuma, who has two different Shun Goku Satsu combos. The simple input version performs a short, more traditional version of the famous super combo. However, the technical input version is more drawn out and features animation frames from some of Akuma's ridiculous mighty combo costume changes. Still, these differences are purely aesthetic.