Asianess and cyberpunk are inextricable from one another, and with Chinatown Detective Agency, cyberpunk has finally made its way to Singapore. And it’s among the towering skyscrapers and the proliferation of futuristic tech that I noticed that this isn’t just another generic Night City, but one filled with very specific idiosyncrasies of the country itself: the accents of its city-dwellers, familiar landmarks imbued with a touch of neon, and passing mention of the country’s present-day Smart Nation initiatives (in short, it’s about making ample use of technology, networks and big data to transform Singapore into a digital city), reaching their logical conclusion decades after. It’s a game that can only be made by a team with intimate knowledge of the city.

And yet, I have still approached Chinatown Detective Agency with some apprehension. As a Singaporean myself, I’ve often thought of my country as a natural sanctum for cyberpunk, even if not outwardly in terms of the genre’s visual cues and trademark grittiness. We still experience the usual cycles of day and night here, of course, but consider our government’s relentless drive to install more police cameras in public settings, or have robots patrol our streets in a bid to curb “undesirable social behaviour”. Our state media also openly espouses the virtues of surveillance with pieces like “How to make Singapore smile for the facial recognition camera”. Set in this backdrop of Singapore’s current-day politics, it’s tempting to hope that Chinatown Detective Agency would somehow impart a searing commentary of these quasi-dystopian policies via its cyberpunk tale.

This is, perhaps, a tall order for most developers to attain, but Chinatown Detective Agency has made some steps to reach it at least. The game is about the eponymous agency of course, and as its proprietor and private investigator Amira Darma, you’re here to solve crimes and hopefully earn some quick bucks by catching cheating husbands red-handed with a handy camera. Unfortunately for Amira, life is never that easy, and she’s quickly contacted by her mentor Justin Koh, who works in the Criminal Investigation Department, for some good ol’ fashioned detective work. But he isn’t the only one who would look to Amira for help; a couple of other figures, from the shadowy Rupert Zhou who works for the country’s elites, to the mysterious information broker Tiger Lily, will soon approach her with offers and agendas of their own.

Aside from these narratives, the real nuts and bolts of Chinatown Detective Agency is the sleuthing, and it has a truly invigorating premise: you’ll need to carry out the actual detective work of looking for clues and searching for answers yourself. More than just looking at crime scenes and poking at pixels, you’ll usually be presented with evidence, clues or artefacts that you’ll need to make sense of, and that means heading to the internet—the actual web that’s contained within the boundaries of your browser, rather than an in-game one—to search for answers yourself. In one case, you’ll need to buy a bottle of Burgundy red wine for a potential informant from a winery, but all you’re given is a list of wine names. The trick, then, is to head to your nearest web browser and pick up the fundamentals of Burgundy wine—so you’ll know which bottle to purchase for your informant. 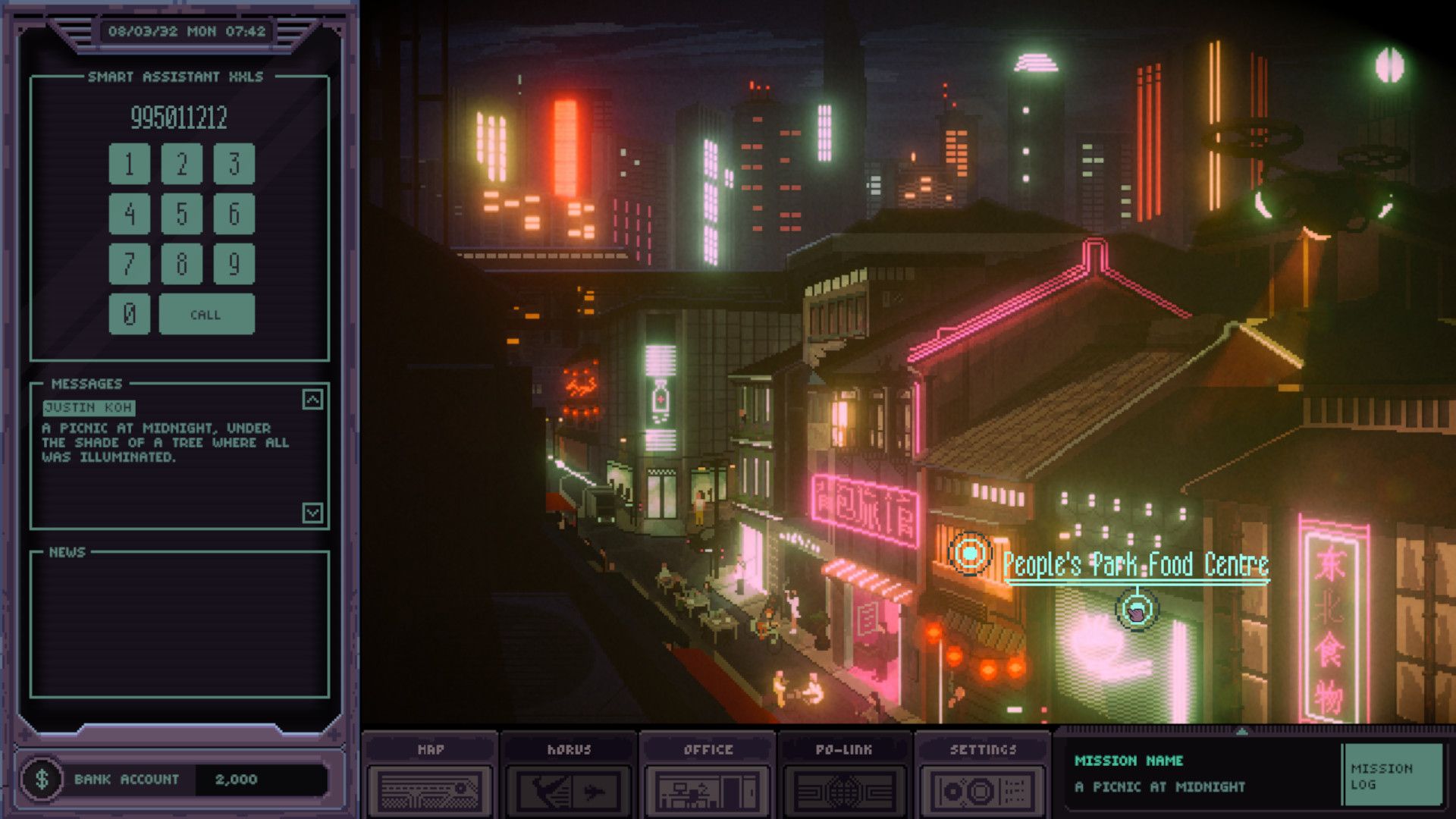 Such sleuthing, when done right, can be downright exhilarating, and that’s the magic behind Chinatown Detective Agency; such eureka moments can feel hard-earned and well-deserved when you manage to make some headway into your case. On the other hand, however, the puzzles can verge wildly from unbelievably easy to ridiculously challenging. In one of the game’s earliest challenges, Amira is tasked with finding out the origins of an antique stamp, and that puzzle alone probably took at least two hours to attempt (in the end, I simply asked a friend for the answers).

Meanwhile, another puzzle involving key phrases from literary classics was simply a matter of searching said phrases online and heading to their associated Wikipedia page for the answers. In these moments, that sensation of pure eureka is considerably muted. Walking the tightrope between puzzles that aren’t too tough, but still provide enough of a challenge for players is an obstacle most developers will face, but I suspect this takes on an entirely different nature when this involves dealing with information on the internet. Thankfully, if you’re stuck at a puzzle—or you know, feeling a tad lazy—you can always ring a lifeline: a plucky librarian named Mei Ting who is smart enough to somehow figure out all the clues in your cases, should you need help. 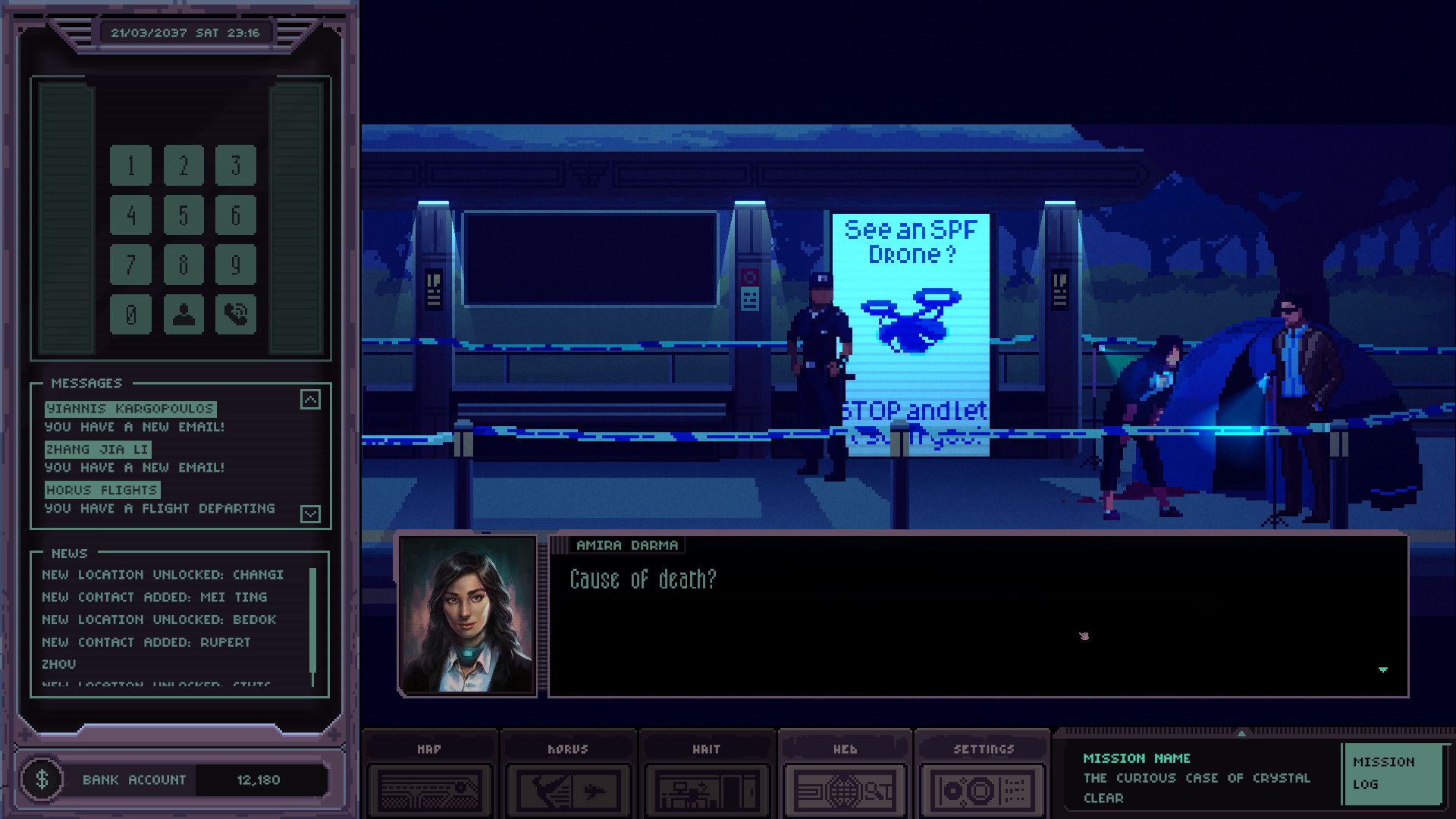 (It’s also crucial to note that there are some puzzles and sequences that are incredibly buggy, which rightly steers the game towards being downright unfair. I’ve heard that some of these issues have been patched, but not all of them are fixed yet.)

But there’s a catch; these puzzle-solving moments, while inventive, never truly feel like a cohesive part of the bigger cyberpunk whole. Aside from the drones, Chinatown Detective Agency still appears to take place in modern-day Singapore. Your searches happen in the real world: on the world wide web, within your browser, in the search engine you’re used to. The class divide, as depicted in the game through its mega-churches and the unbridled power of elite tycoons, is rooted to the spirit of this current decade. Bills, humorously enough, still need to be paid via emails. At times, I’ve almost forgotten that this was a game set in a cyberpunk future of Singapore; everything appears too familiar, too routine, too well-worn. I had wished that Chinatown Detective Agency would take several steps further to heighten—perhaps even exaggerate—the peculiarities and flaws of the country.

It’s clear that its developers want to break out of the rote trappings of detective-focused, point-and-click games; Chinatown Detective Agency is a game that often yearns to be more, and this is no more obvious than the way it presents its puzzles. But it’s a pity, then, that it seems to be held back by something—perhaps, I would think, an ideal or in pursuit of some form of authenticity? After all, scenes of a cyberpunk future outside of the usual locales—Japan, Hong Kong, or some unspecified western lands with a smattering of orientalist icons—are rare, and being able to see cyberpunk stories set in my own country can be immensely gratifying. Thus, it’s no wonder that its developers would want to get this portrayal absolutely right. But I would also like to see a game set in an alternative reality of the city that’s so raw, so close to the bone, that it can shake up and revitalise the once-dated cyberpunk genre. One that would not only turn heads for its incisive vision of a truly cyberpunk corporatist state, but also warns us of our impending future: one marked by persistent surveillance, securitised spaces, and rampant inequality. 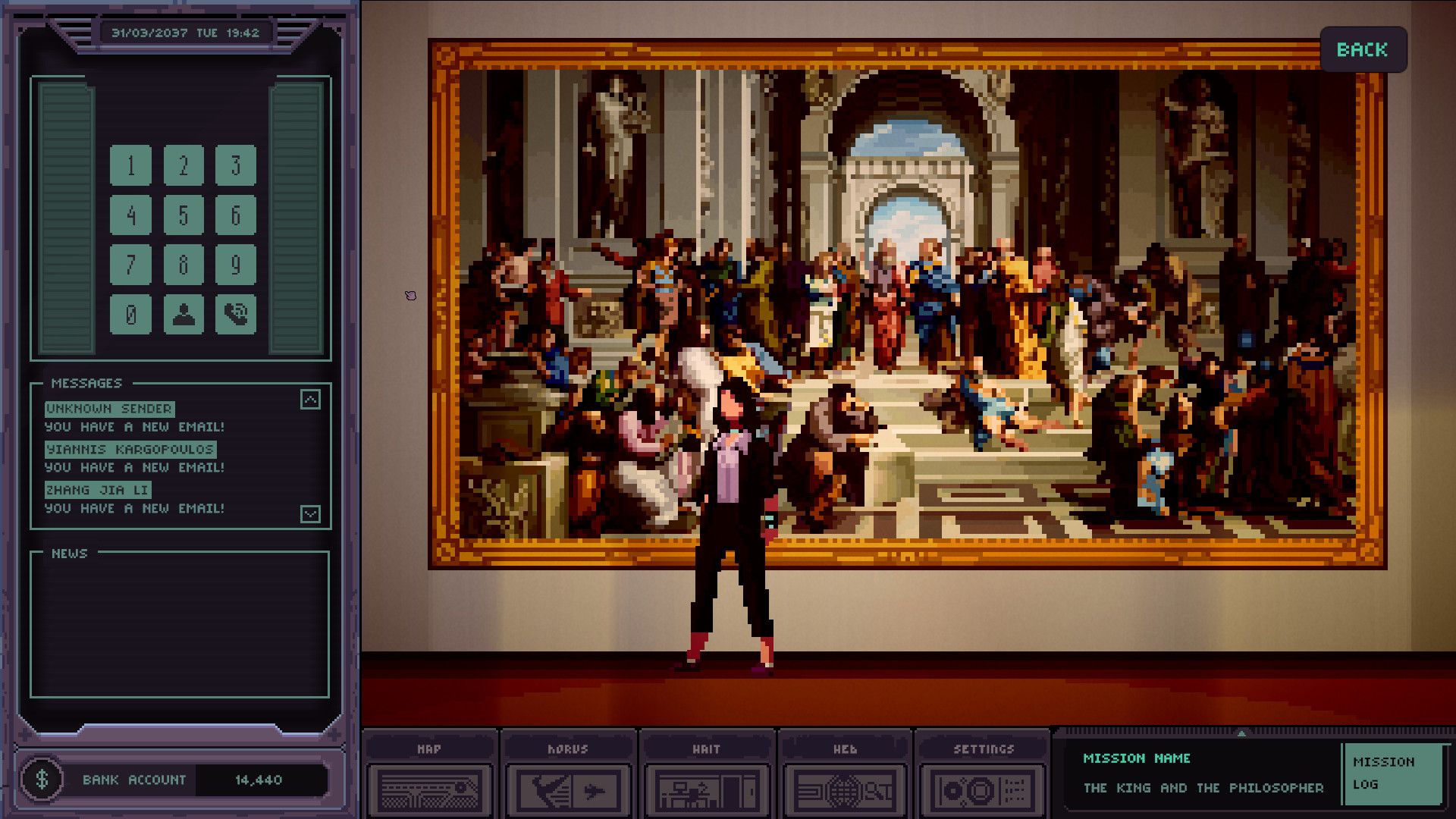 Nonetheless, it’s impossible not to be charmed by Chinatown Detective Agency. Mei Ting, in particular, is exuberant and spirited (she particularly enjoys the promise of cash), and the motley crew of characters who accompany you in your detective work is far from atypical, as you work together to unravel conspiracies and convoluted schemes. The treacherous plot at the heart of the game, too, will probably take repeated playthroughs to uncover, given the several routes and choices you can pick throughout the game. For all of Chinatown Detective Agency’s imperfections, this is still a case I’d gladly take on, over and over again. Of course, with a web browser and notebook in hand.

Score: 3.5/5. A review copy was provided by the publisher.