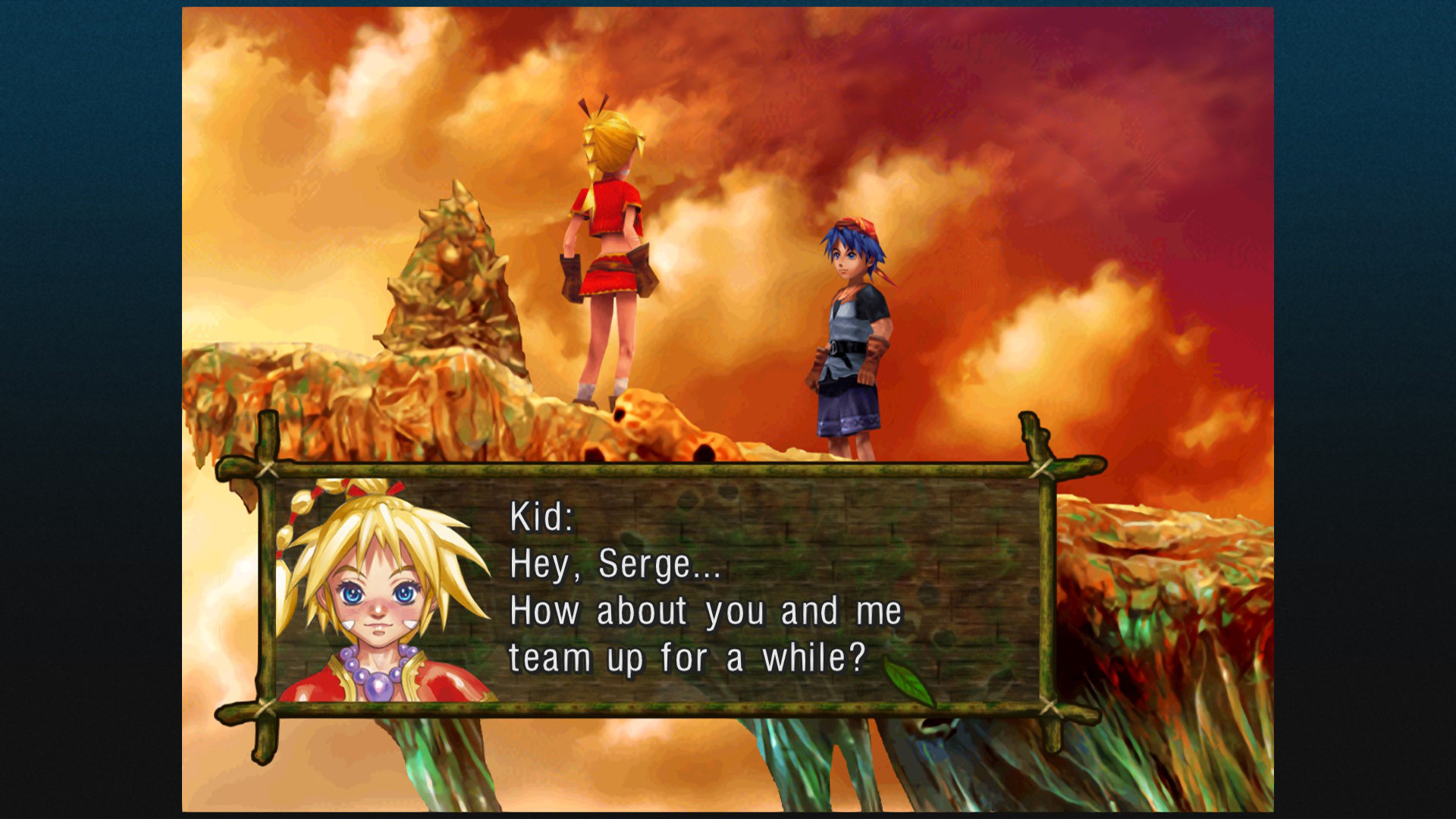 Square Enix remasters the largely forgotten sequel to Chrono Trigger, as one of the forgotten gems of the PlayStation 1 era returns.

We will never understand the way Square Enix has treated Chrono Trigger over the last few decades. As far as we’re concerned it’s the greatest Japanese role-player of the 16-bit era, and one of the best of any period, and this seems to be a common opinion amongst fans of the genre. Except we’re never really sure exactly how famous Chrono Trigger is. It took 14 years before it was even released in Europe and since then it’s barely ever been mentioned again officially, apart from smartphone ports and an initially broken PC version.

It should be one of the most revered video games of all time, and in certain circles it is, but for whatever reason Square Enix, for who re-releasing old Final Fantasy games is almost like breathing, have never done anything with it… except the 1999 sequel Chrono Cross, which, up till now, has been even more studiously ignored.

Although it reviewed well when it first came out, on the original PlayStation, Chrono Cross is a much harder sell than Chrono Trigger, even and especially to fans of the original. It has little in common with the original in terms of story or characters and while there is a clear evolutionary link from the celebrated combat system of Chrono Trigger it’s still very different and not obviously better. In short, Chrono Cross was a peculiar sequel and this is a peculiar choice for a remaster.

One of the many things fans were upset about with Chrono Cross is that instead of the original’s tight knit group of characters there’s a total of 45 possible party members in the sequel, with all that implies about how little time you get to spend with some of them. The lead is a teenage boy named Serge who discovers a parallel world where he died 10 years earlier. His investigations into how and why this happened quickly begin to take on multiverse destroying significance, as typical Japanese role-playing shenanigans ensue.

There’s an element of the Zelda: A Link To The Past light/dark world concept to the set-up, as you explore how the two worlds differ and why, but rather than being solely a gameplay mechanic the idea of exploring the road not taken is the central theme of the game’s storytelling, in how it applies not only to Serge but every other character he meets.

The story is complex and ambitious, and despite how many there are of them, the majority of the characters are interesting and fun (and often really weird). It’s a long game though, coming in at a minimum of 40 hours, and by the end the plot has got so convoluted it becomes difficult to follow, especially if you’ve had the temerity to step away from the game for a few days, and have forgotten what you were doing. However, this is a late 90s game so it does nothing to help remind you, unlike more modern role-players.

Square Enix has tried to add some new quality of life features to the remaster, particularly regarding the magic system, which works similarly to materia from Final Fantasy 7. It’s highly flexible, in terms of customising the abilities of your characters, but the interface is a nightmare, so it’s a welcome relief you can now remove every ‘element’ at once or simply auto-fill the grid they fit into.

Instead of a standard level system you get a new ‘star level’ every time you beat a boss, which increases the stats and element options for every character, so you don’t have to upgrade all 45 individually. Beating ordinary enemies merely provides small, but permanent, boosts, which also limits the need to level grind. Acquiring new weapons and armour is also unusual, for a 90s game, as you often have to supply materials yourself to access the more useful items.

One of the many great things about Chrono Trigger was its streamlined combat system, where battles took place quickly, without any need to segue to a separate screen, and, unusually for the time, could often be avoided entirely if you wanted. That is also true of Chrono Cross, except that speed and accessibility is undermined by layers of unnecessary rules that make it more complicated without ever making it more interesting.

It’s still a turn-based system, where you use normal attacks (of one of three strength levels) to build up the energy to use more powerful elemental abilities – a common enough concept nowadays. What isn’t common in modern games though is the random element which determines how likely it is even normal attacks will hit, which quickly becomes irritating. Especially when you add in mechanics like slowly recharging stamina, which only drags encounters out for even longer.

The remaster acknowledges that there’s a problem as there’s a new option to switch on ‘battle boost’ whenever you like. Turning on god mode is not exactly an elegant solution though and many will probably not end up using it, as it destroys any sense of strategy, which, if you can get past the slow pace, is the system’s key appeal. Rather than battle boost it would’ve been better to have an option to see the internal ATB style timer that underlies how the turns are processed, but which you just have to guess at.

In its original form, released at the time that it was, Chrono Cross was rightly regarded as a great game but there is a serious issue with the remaster that goes beyond just how much the game has aged. In terms of resolution the graphics have been handled very nicely, with the option for new HD character models and text fonts in enhanced mode. This also smooths out the pre-rendered backdrops, a technical process which is always a compromise but, in this case, usually a welcome one.

The problem though is the frame rate, which was always unreliable in the original game and which, inexplicably, is even worse in the remaster. It’s actually impressive that Square Enix has managed to get a game to run this badly on the PlayStation 5, as the frame rate not only dips incredibly low, to the point where it feels like you’re moving through treacle, but it’s extremely inconsistent and unpredictable.

There are also audio glitches and the pre-rendered cut scenes run at their original, ultra-low resolution. The game does benefit from a new translation though and there is the option to increase the overall game speed, although that does little to improve the frame rate.

For existing fans, the most appealing element of the remaster will be the inclusion of the Radical Dreamers visual novel, which was originally released for the SNES Satellaview modem. That means it’s never been available outside of Japan before and it’s interesting not just because it features more ties between Chrono Trigger and Cross but because it’s much closer to Western style text adventures than is usual for a visual novel.

Even without the frame rate complaints, Chrono Cross’ battle system means it’s a difficult game to enjoy for modern audiences. If you choose to persevere the rewards are many but ultimately this needed a full remake, not just a light remaster. If Square Enix is ever going to go to that sort of trouble (and they probably aren’t) we hope it’s Chrono Trigger that gets the treatment first though, because as good as its sequel is it doesn’t have anything like the same level of charm and accessibility as the original.

In Short: It hasn’t aged particularly well, and there are serious technical issues with the remaster, but the sequel to Chrono Trigger is still one of the original PlayStation’s best Japanese role-players.

Pros: An ambitious sequel with a huge cast of characters and an intriguing premise. Combat has its problems but it’s flexible and creative. Great soundtrack and some useful quality of life additions.

Cons: The frame rate issues of the original are somehow even worse in the remaster. Combat lacks pace and is poorly explained. Plot becomes unwieldy before the end.