Omoroth The Sea Titan is the boss of Core Keeper's Sunken Sea. Simply reaching the kraken's lair takes a lot of crafting and exploration, to say nothing of the challenge in bringing the beast down. Omoroth's attacks are relentless and come from every direction, attempting to defeat them with anything less than full preparation is a dangerous proposition.

This guide gives you all the information you need about finding and slaying Omoroth. We've even included a recommended loadout with easy-to-find gear so that any player can go toe-to-toe with the titan, regardless of skill level.

Core Keeper is currently in early access. Information about the game is subject to change, and this guide may be updated accordingly.

How To Find Omoroth The Sea Titan 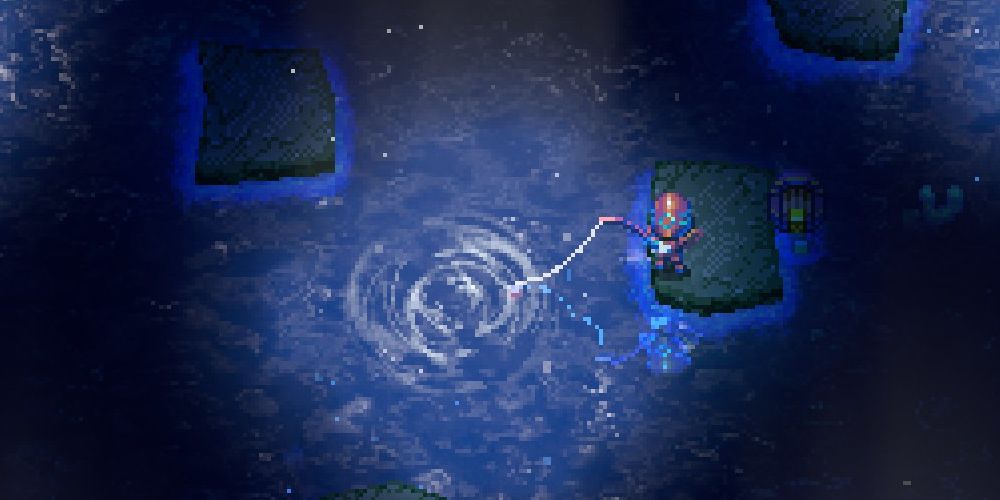 Omoroth lurks in a hidden grotto somewhere in the Sunken Sea. It's recognizable by its circular shape. Look for an island entirely covered with limestone walls with a single narrow entrance. The inside of the grotto has small 2×2 islands and several large whirlpools. The whirlpools aren't dangerous, but they indicate that Omoroth is near.

If you're having trouble finding Omoroth's lair, search the Sunken Sea for seashells. They're dropped by enemies and can also be dug up from the sand. If you see a tile with a large shell, try using a shovel to collect the prize. Seashells can be combined with Machine Parts and Ancient Crystals at the hologram projector to create a scanner that can pin down Omoroth's location.

The hologram projector can be crafted at the Hive Mother statue near the Core once it's been activated.

Just getting to Omoroth's grotto requires a boat. The Boat Workbench can be crafted from a Scarlet Workbench, and you'll need to construct and power a Table Saw from the Electronics Workbench to cut the planks required. It's strongly recommended that you save up enough Octarine and Coral Planks to build a speeder before attempting to fight Omoroth – you'll need the extra movement it provides to stand a fighting chance.

Once you've found Omoroth's lair and are ready to take them on, you'll need an Expert Lure to draw the monster out. Unless you're extraordinarily lucky and managed to find the Fishing Merchant at his starting point, the first step is to defeat Azeos The Sky Titan. Azeos drops the Chum Pile, which can be placed in a room with a bed to entice the Fishing Merchant to move in.

Purchase a Purple Lure from the Fishing Merchant and use the hologram projector to craft the Expert Lure. You'll need the following materials:

Each attempt to defeat Omoroth requires a new Expert Lure, so it can be worthwhile to make a few if you aren't confident you can defeat the boss in one try.

Once you have the Expert Lure, equip it in your off hand and use a high-level fishing rod (Scarlet or Octarine) to fish in one of the lair's whirlpools. After you get a bite, pull the line up and Omoroth will appear to do battle.

Omoroth stands still for a few seconds after being summoned. Use this time to equip a shield in your now-empty off hand. It's also smart to eat any food you have before casting your line to start the fight with buffs.

How To Beat Omoroth The Sea Titan 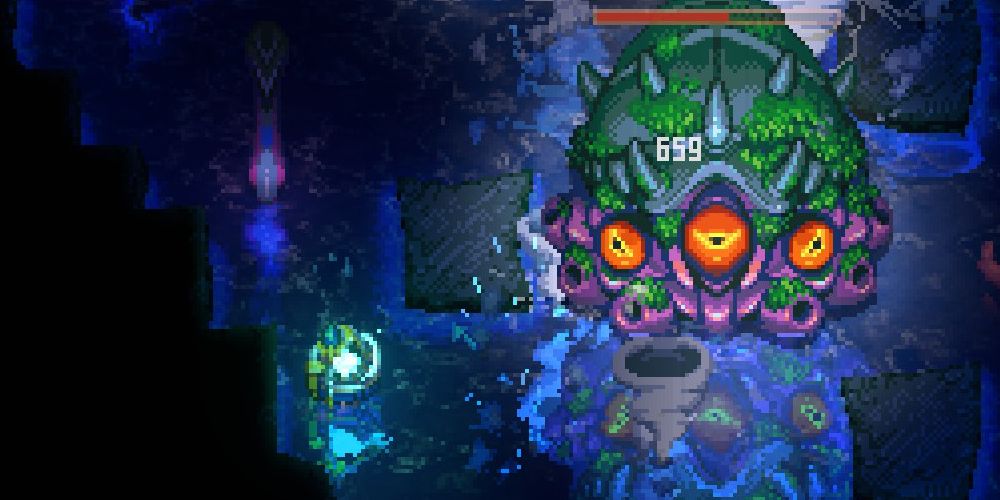 Before the fight, make sure you have a spare boat at your respawn point. If you die, you'll need to sail back to the grotto to collect your things, which can be delayed for a long time if you need to build a new boat. If your character becomes stranded without the resources to build a boat or a bridge home, create a new character in the same world to stage a rescue operation and drop off the needed supplies.

Omoroth remains stationary while their head is above the water, but frequently dives back down to change locations. You can only damage the boss while their head is visible. Omoroth fires large groups of tornadoes that slowly move around the room before eventually returning to the boss. Dodging these tornadoes is key to survival.

Large tentacles will periodically spawn throughout the fight. These are stationary but have a wide arc of attack and can deal a lot of damage from close range. Try to destroy them whenever Omoroth is underwater to keep yourself from being overwhelmed. Standard tentacles like those throughout the Sunken Sea may also appear; while this is rare, it's important to take them down when they spawn to prevent them from using their ranged attack.

Keep moving and use ranged attacks to hit Omoroth whenever you can. This fight requires patience more than anything else, since Omoroth doesn't have any way of healing and doesn't change their tactics at any point during the fight. Ultimately, all you need to do is stay alive and keep firing.

No matter how good your melee weapon is, only use ranged attacks during this fight. Getting into melee range with Omoroth or the tentacles is much too risky. This is especially true of the boss's head, since if you're too close you can potentially be hit by several tornadoes at once as they're fired, resulting in an instant death. 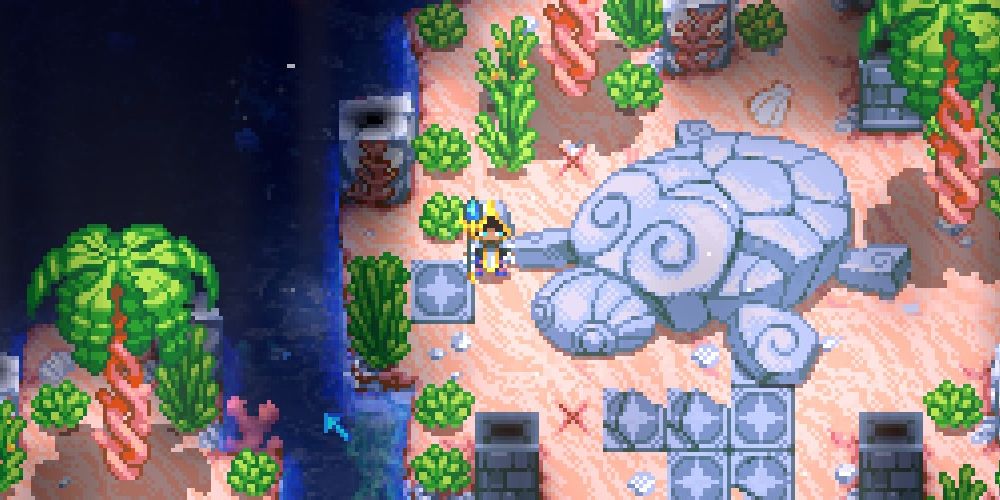 At the bare minimum you should have a full set of Octarine equipment before attempting to fight Omoroth. However, you'll have a much better time if you first explore the Forlorn Metropolis. This dungeon is spread across several islands throughout the Sunken Sea and is inhabited by Caveling Scholars and dangerous Core Sentinels.

Ransacking the Forlorn Metropolis will not only get you lots of useful potions, but the Caveling Scholars occasionally drop their equipment. The Scholar's Staff, Scholar's Hood, and Scholar's Cloak boost your dodge chance and critical hit rate while also enhancing your ranged attack power – in other words, they're tailor-made for beating Omoroth. Be on the lookout for the Caveling ID in the Metropolis as well; this off-hand item is better than a shield against the Sea Titan since it further increases your dodge chance by ten percent.

While you're exploring the Sunken Sea, be on the lookout for a small island surrounded by coral. If you mine to the center of the island's limestone walls, you'll find a chest containing the Coral Ring and Coral Amulet. These both increase the speed of any boat you're piloting, making it easier to dodge Omoroth's attacks. If you can't find the Coral Island, look for a shipwreck instead. A nearby chest will contain the Oceanheart Amulet, which provides a significant HP boost.

In addition to bringing Guardian Potions, Greater Healing Potions, and Keen Potions from the Forlorn Metropolis, you should cook meals before the fight that will provide buffs. Golden Darts, Silver Darts, and Pink Coralotls can all be fished in the Sunken Sea, and provide boosts to critical hit chance, dodge chance, and ranged attack damage respectively. Throw in some home-grown Carrocks for an Armor boost, and you can combine the four ingredients however you like to create two nutritious meals. Best of all, since you're using both fish and vegetables you can potentially benefit from your Gardening and Fishing talent trees! 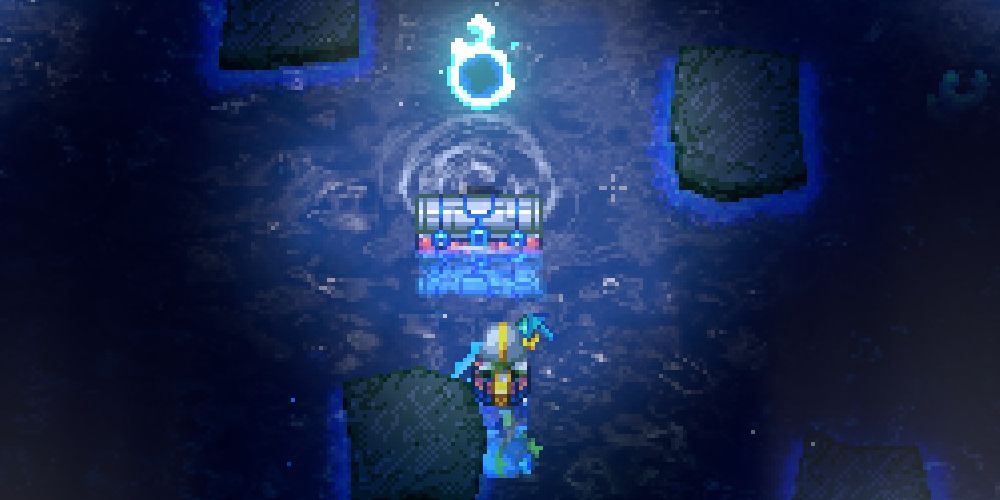 Omoroth drops an assortment of the following items each time they are defeated:

Omoroth is always guaranteed to drop at least one of the equipment pieces bearing their name. While it is technically possible for the boss to drop the entire set at once, this is extraordinarily unlikely, so you'll need to face Omoroth several times to collect them all.

Equipping all three pieces of Omoroth's Armor increases your total Armor by 21.1 percent as long as you are adjacent to at least one water tile. This is great when navigating the Sunken Sea, but otherwise not much use. That said, Omoroth's Armor is excellent even without the set bonus and makes your Explorer look cool, so it's worth wearing anyway!