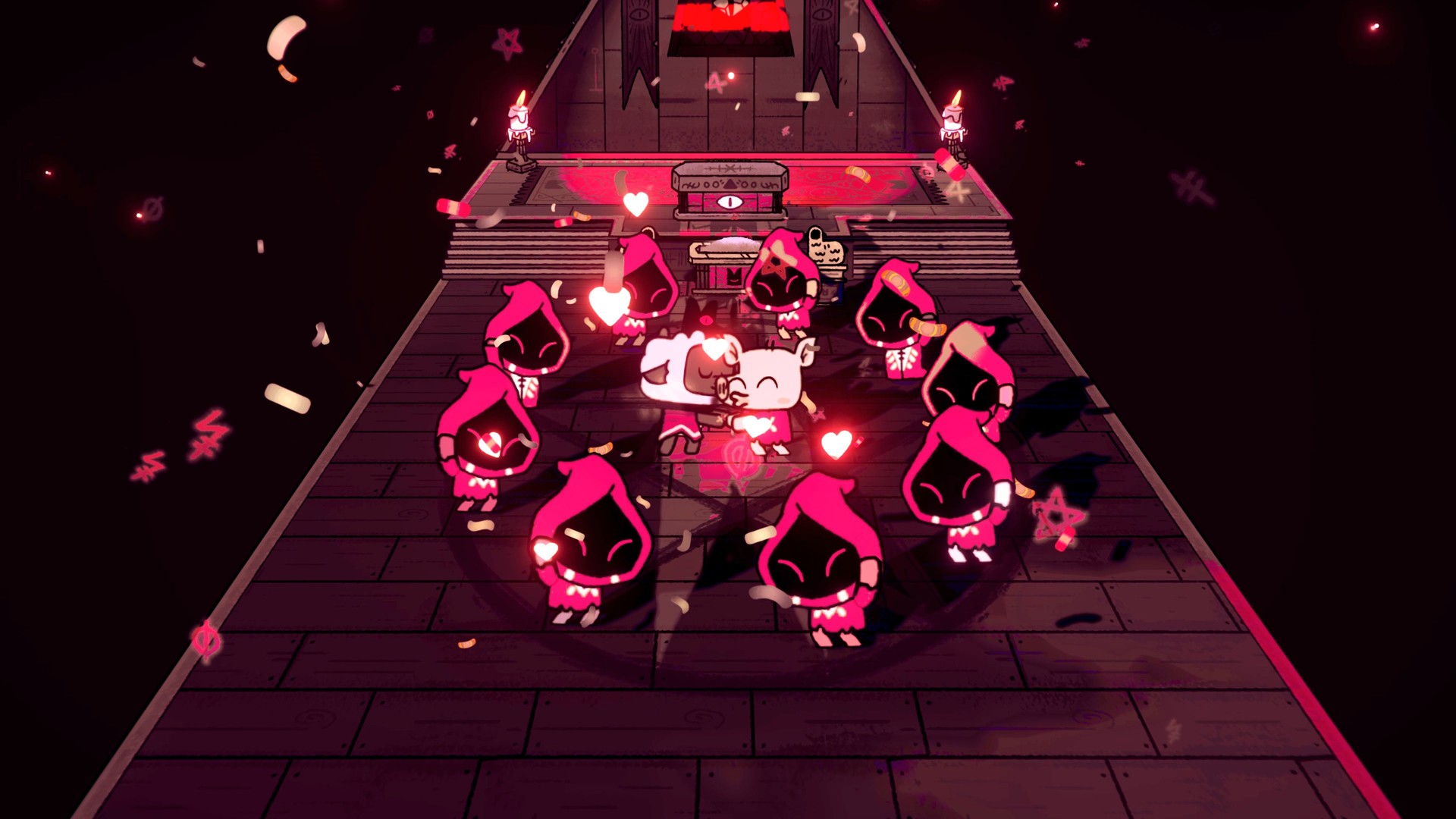 Running a demonic cult that sacrifices its own followers seems a bit grim for a video game, but it’s all good fun when it’s just cute animals.

The idea of having cute little cartoon characters doing inappropriate or violent things is not a new or particularly clever idea. It’s not uncommon in video games, with Conker’s Bad Fur Day being one of most famous examples, but there is a good reason why Cult Of The Lamb is filled with cute anthropomorphised critters. Running an evil cult would be far too disturbing if you did it with real people, and realistic depictions of violence, but when it’s only cartoon puppies and bunnies getting hurt it suddenly becomes a lot more palatable.

The real question here is not why you’re controlling a cute little lamb but whether running your own cult, to appease a mysterious, Lovecraftian god, is a good idea for a video game. It is an amusing concept but, especially given how hard the trailers try to obfuscate what you actually do in the game, you quickly begin to wonder whether the peculiar story set-up came first and the ideas for the gameplay sometime later.

Cult Of The Lamb describes itself as a roguelike, which is technically true but while there is a certain amount of top-down hacking and slashing, at heart it’s a business management game not a million miles away from the recent Two Point Campus. Except here your business is indoctrinating followers, performing rituals, and going on crusades.

There are a lot of obvious influences in Cult Of The Lamb but while there are few direct similarities in terms of gameplay, it’s obvious that making an evil version of Animal Crossing was one of the starting points. The management aspect of the game plays like a more traditional city builder or real-time strategy game, with resources to gather, followers to assign jobs to, and buildings to construct. You have to perform rituals, carry out sacrifices, and organise sermons but as unusual as that sounds you still have to do all the usual boring stuff as well, such as building farms and keeping your followers fed.

Your underlings have to be kept satisfied with food, shelter, and religious indoctrination, but there’s also a peculiar emphasis on sanitation – which probably sounded funny at the design stage but means you spend a wearying amount of time ensuring all your converts are busy shovelling up animal poop. They can get as fed up with this as you do, as if left unstimulated they can mutiny and leave. So you not only have to keep them spiritually and physically nourished but either ply them with gifts or lock them up until they rethink the idea of rethinking their lives.

At first you have to do a lot of the busywork yourself, but gradually you’ll get more followers and more chances to upgrade your base, as you work through a tech tree that not only includes more advanced buildings and abilities but the chance to turn followers into demons and bring them along with you on a crusade.

There’s also a peculiarly large number of purely cosmetic options to spruce up your base and the followers themselves. If this was a mobile game, you’d probably have to pay for them with real money but, as ever, getting them for free (assuming you’ve put the work in to unlock them) just exposes how pointless they all are.

Cult Of The Lamb is very much a roguelite, in that while it does feature procedurally generated layouts, and harsh punishments for death, that barely figures as an inconvenience – and not just because the game is very easy by default. The only time you’re going to die is when out on a crusade and they usually only take around 15 minutes to battle through. That makes the game sound very short but most of your time is spent back at base, tending to your flock and completing side quests and mini-games, so the whole thing still lasts a solid 12 hours or so.

The combat is very simple but it works well enough, with a standard attack, a curse ability, and a dodge roll. There’s a range of different weapons, curses, and buffs you can pick up and mechanically it’s actually quite good, but there’s too little difference between the weapons and abilities and, bizarrely, you don’t get to choose which ones you start with. Again, the influences are obvious, most notably The Legend Of Zelda and Hades, but Cult Of The Lamb doesn’t have anywhere close to the level of depth and variety as those games.

Considering the combat basics are a lot of fun it probably should have been a bigger focus, as while the base building seems more novel at first it also proves to be disappointingly shallow. The weird amount of cosmetics isn’t the only comparison to be made with mobile games, as the lack of any real strategy in the base building elements smacks very much of a mindless smartphone app, where your decisions are largely meaningless and you just mechanically work your way through all the options.

You certainly can’t complain about the graphics, which are wonderfully well designed and manage to sell the mix of cuteness and demonic horrors perfectly, but that’s nowhere near enough to compensate for the game’s other failings. There’s a lot of good ingredients in Cult Of The Lamb but they haven’t been blended together at all well, and while it’s slim pickings for new games at the moment this isn’t worth sacrificing any time or money on.

Cult Of The Lamb review summary

In Short: Turning a demonic cult into a management simulator is an amusing idea but the cute graphics are the only lasting entertainment to be had from this misjudged muddle of a game.

Pros: The premise is neat and the art design and graphics make the best possible use of it. The combat might be extremely undercooked, but the fundamentals are solid.

Cons: Base-building requires little in the way of forward planning or strategic skill, and quickly becomes repetitive. Combat lacks variety and the random weapons are a real chore.