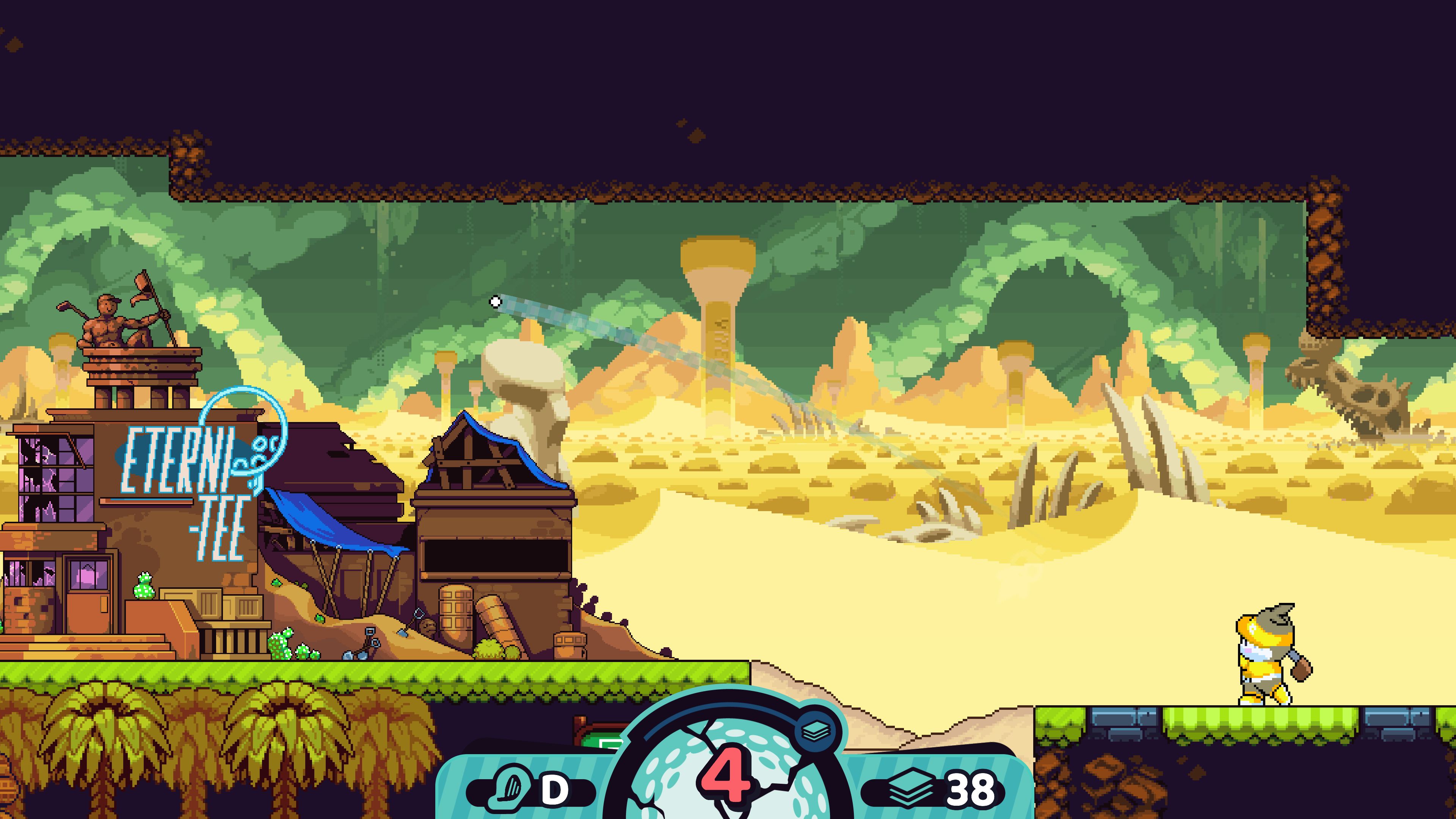 Mixing a golf game with a 2D platformer and elements of roguelikes is a pretty bizarre idea but Cursed To Golf pulls it off to a tee.

Despite not being the most animated of sports, golf nevertheless has a long and storied history in video games. From Leaderboard to Mario Golf and the new PGA Tour titles, golf games have been around almost as long as video games themselves. They’ve been surprisingly varied too, with not just straight simulators but oddities such as would-be role-playing game Golf Story and the enjoyably surreal What The Golf?

Cursed To Golf goes further, by splicing the mechanics of a roguelike and a 2D platform game, navigated using your trusty golf clubs. Unlike conventional golf, which demands a plethora of differently weighted clubs, here you have just three: a driver for long shots, an iron for medium, and a wedge to get you out of bunkers or over high obstacles. While real-world golf courses don’t have too many of the latter, Cursed To Golf is full of them.

That’s because rather than playing on sunny, well-manicured lawns, here you’re cursed to play in the golfing version of purgatory, where each hole is a subterranean cavern strewn with twists, turns, and hazards. Naturally these include sandy bunkers and water traps, but you’ll also find giant spikes, boxes of TNT, and zombie graveyards that snatch your ball if it lands inside their confines.

Your job is to make your way through all 18-holes in a single run to earn your escape. Since each hole is effectively its own mini-dungeon, with escalating threats and complexity of challenge, that’s a tough job made harder by the fact that every few levels you’ll face a boss. Defeating them means beating them on their own course, taking turns to take shots until one of you reaches the pin.

As well as hazards and encumbrances, courses also feature shortcuts, normally opened up by triggering chain reactions of TNT, and idols, which you smash to gain extra strokes. That’s crucial, because you start each hole with a grossly insufficient number of shots available and bolstering that by breaking statues is essential to survival.

Your other lifeline is Ace Cards. They let you pull off a range of special moves. Some simply add extra shots to your supply, while others let your ball perform a mid-air U-turn, stop time so you can drop it vertically, or fire up a little rocket motor, letting you pilot the ball in the direction of the hole until you crash into scenery.

You get issued with a set of Ace Cards when you start each round and can acquire new ones from treasure chests. Those appear in the game’s overworld, which is set out a bit like Super Mario World, with frequent junctions that let you choose whether to take the quick and easy path to the next course or plump for a route that offers you a power-up and potentially a visit to the game’s shop to buy more cards, in return for facing a cursed level.

Those use standard course layouts (of which there are about 80 – there’s no procedural generation here, just handmade courses, but you’re never quite sure which ones you’ll be facing) but add curses, which trigger every few strokes. Those can be fairly benign, like a tailwind, which can inadvertently be helpful if it’s in the same direction you’re going, to only being able to hit the ball to the left, which can be absolutely catastrophic if you happen to be heading the other way at the time.

The random nature of the curses tends to make those paths less attractive if you’re in the middle of a really good round, the possibility of being kiboshed by bitter luck outweighing the often quite modest uplift provided by the Ace Cards. Some, like those that add extra strokes to your supply, are vital, while many others are of fairly questionable value in most circumstances.

The golfing itself is compelling though, with the standard issue power meter, where you tap once to set the shot’s power and again to choose your aim, working consistently well, and the ability to add forward or backspin to each shot proving indispensable. The maze-like courses take quite some navigating though, the solid physics of the 2D side-scrolling world meaning both successes and failures feel as though they’re based on your skill rather than the vicissitudes of RNGesus.

The 16-bit-style graphics work nicely, as does the chiptune accompaniment, that’s lightly reminiscent of the golden age of Pilotwings. The whole package plays like a homage to a time when games were simpler, cuter, and considerably tougher. Like most roguelikes, Cursed To Golf is a game that takes time and repetition to master.

The high difficulty, small number of clubs, and relatively narrow variety of Ace Cards do eventually undermine the excitement, but its humour, four distinct underworld biomes, and characterful bosses help balance that out. Cursed To Golf delivers a lot of challenge and a high level of polish at a budget price, and while it may not be a hole in one exactly, it’s definitely above par.

In Short: A polished, witty mix of golf sim, platformer, and roguelike that offers sterling value for money but can’t quite overcome an increasing sense of repetition.

Cons: The simplicity of your three-club set-up, and the fairly small selection of buff-adding Ace Cards, does start to feel limiting. Some of the courses (and curses) are brutally difficult.