In Cyberpunk’s Night City, encountering another creature besides a cockroach is a rare event. There aren’t many animals in the city, and the only one you can see all over the place is a Sphynx cat. It isn’t clear if players always see the same cat or only Sphynx cats live in Night City.

Nevertheless, months before the game was released, info about a pettable cat started surfacing the web, and fans were incredibly shocked (and that was before they knew there is a way to make the stray cat your pet.)

Who can blame them? Whenever there’s an animal in a video game, the following question is, can you pet it? There’s even a whole Twitter account dedicated to knowing if you can pet the dog in certain games. Thankfully, Cyberpunk’s developers understand what players want and let gamers pet the Sphynx cat that spawns in Night City.

Petting the cat isn’t as easy as just pspsps-ing it, so here’s a guide to the places where you can find the cat as well as what to do to make it a permanent resident in V’s apartment.

Where To Find The Cat 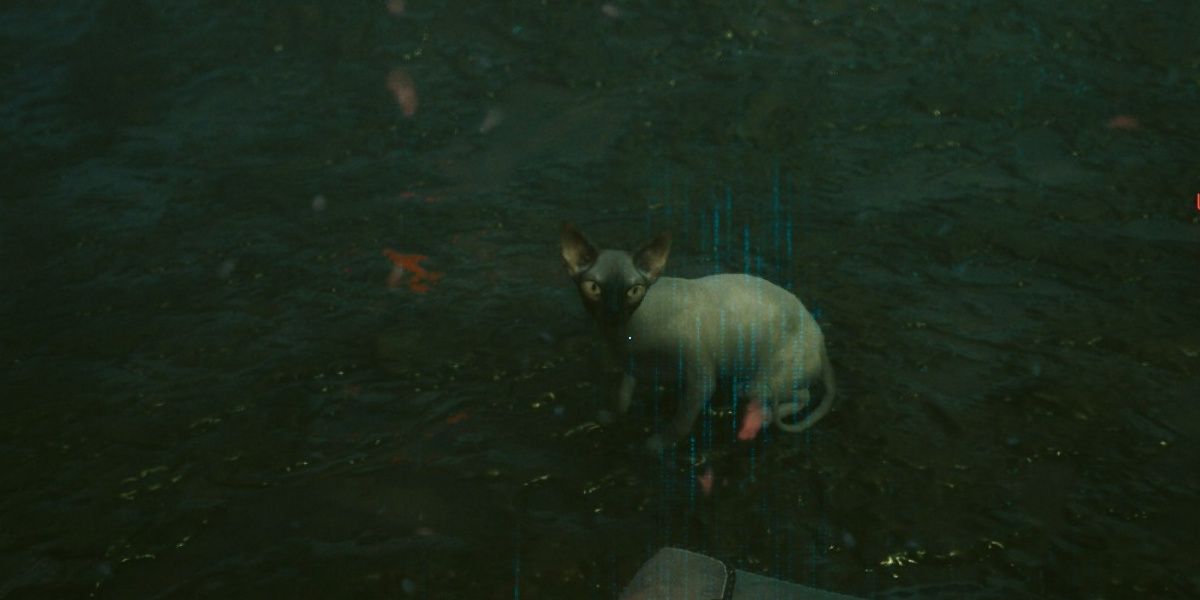 To be able to pet this little guy, you have first to find it. During your adventures in Night City, you’ll spot cats here and there if you’re paying attention to the world around you. Players have reported seeing cats underwater or during missions.

It isn’t clear if the cats are real and them being underwater is one of Cyberpunk’s many bugs, or if this was intended and the cat is some sort of spirit. The spirit theory isn’t so crazy and is actually something Takemura points out during the Gimme Danger mission.

He thinks that maybe the cat is a bakeneko, a cat spirit that can restore the dead back to life. For a few seconds there, it seems that the animal can actually see Johnny’s digital psyche.

How To Pet The Cat 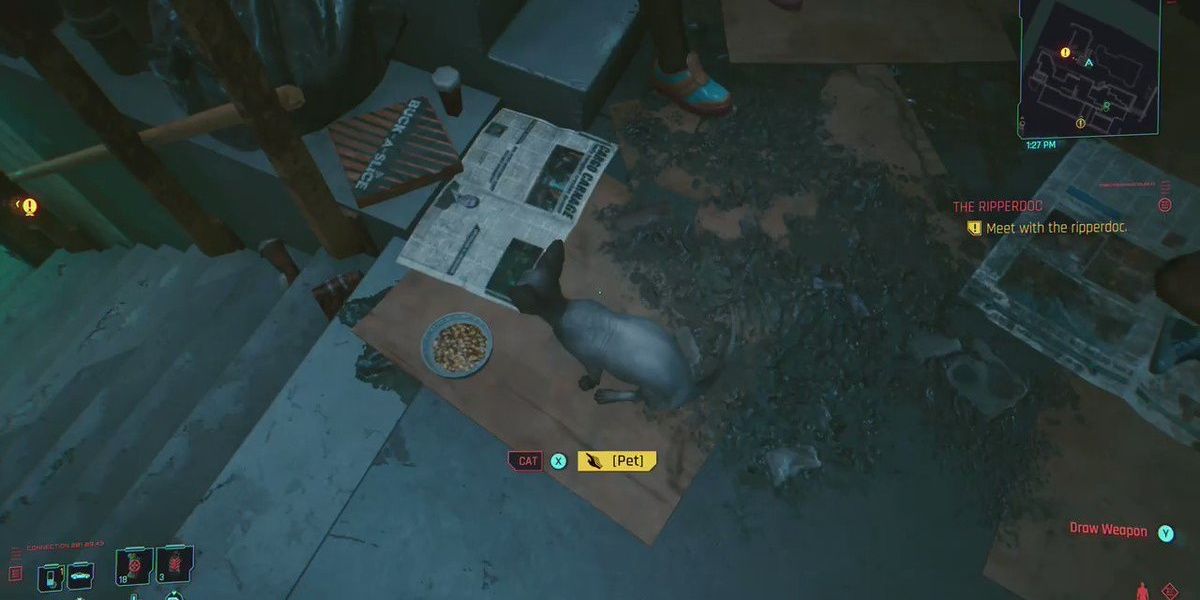 While the cat sometimes appears in the game, you can only pet it during two missions.

This one is the fourth story mission in the game; you can start it by only talking to Jackie in the Watson area. After getting V’s weapon back, you’ll be tasked with visiting the Ripperdoc. This is when you have to start paying attention to your surroundings because you can see and pet the cat in the alley that’s five feet away from the Ripperdoc location. To find it, just look out for the NPC sitting in the stairs on the alley; next to it is the cat.

Once you are in front of the cat, just press X or square. If you’re playing on a PC, press F.

The other moment you’ll get to pet the cat is during the secret mission Feed Teh Cat. This one is special because if you follow it all the way through, you’ll get to adopt the cat, and it will live in V’s apartment.

To activate this mission, head outside of V’s apartment, turn to the left, and then follow the corridor and turn to the right. There you’ll see a garbage bin with a data shard that says “feed teh cat.” If you can’t find the shard, look for the disposal unit with a “Power cells, chemical waste, small cyberware, biowaste.” sign.

The next thing you have to do is, well, feed the damn thing by pouring some cat food in the shard. Afterward, go back to sleep inside your apartment. When you come back to the alley, the cat will be there eating; this time, you’ll learn its name is Nibbles.

At that moment, players can pet Nibbles and pick it up, followed by a cut scene where the cat is now in V’s apartment, sitting in the laundry basket next to the bed.

Keep in mind that the shard will only appear after you reached the game’s second act.

Where To Find Cat Food 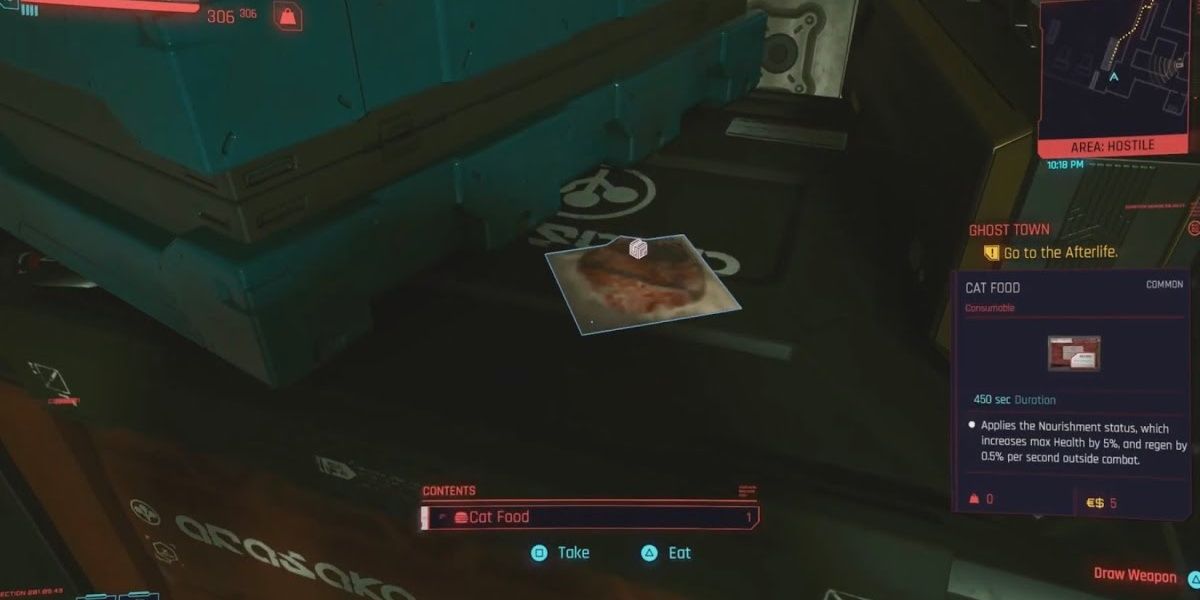 As you can see, adopting Nibbles is quite simple; the tricky part is where to find the cat food to lure it in. Night City is a city filled with synthetic things, so finding actual food isn’t going to be that easy. Nevertheless, there are some places you can go where cat food appears.

NEXT: Cyberpunk 2077 Complete Guide And Walkthrough

What Hollywood Got Right And Wrong About VR And AR