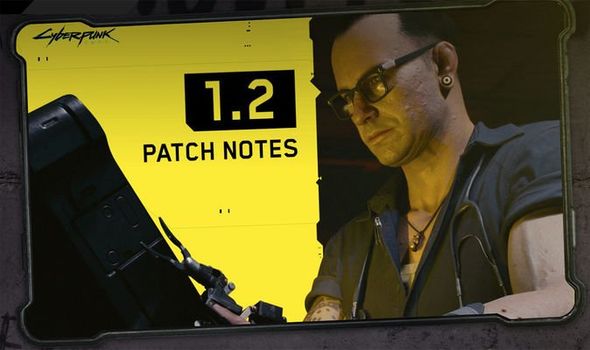 After recently giving fans a brief overview of the new update, CD Projekt has returned with a more in-depth look at some of the changes coming to the action RPG.

In fact, the patch notes are among the lengthiest and most extensive I’ve ever seen.

While the huge Cyberpunk 1.2 update still doesn’t have a release date, CD Projekt has confirmed that the patch is “coming soon”.

Barring any last minute delays, it wouldn’t be a surprise if it drops later this week, perhaps on April 1 or April 2.

As for the changes, update 1.2 makes various gameplay adjustments, fixes a ton of bugs, and perhaps most crucially of all, improves performance on low powered machines and last-gen consoles.

This includes NPC, vehicle and environment streaming improvements on PS4 and Xbox One, as well as fixes for random game freezes and crashes.

As previously reported, the NCPD spawn radius has been increased, new steering sensitivity settings have been added, and there’s now a way to get out of a jam when your car gets stuck.

• The NCPD spawn radius for when the player commits a crime has been increased.

• Unstuck Rocking/Rotating feature added to all vehicles. Use Left Stick or A/D W/S or LShift/LCtrl to engage rocking and rotating to stuck/beached vehicles to try and free them.

• Fixed an issue where aiming while under the effect of the “Berserk” cyberware moved the crosshair with no input from the player.

• Adjusted fire rate of the helicopter turret in Love Like Fire.

• Police vehicles will no longer immediately despawn after getting into Kerry’s car during Rebel! Rebel!

• Fixed an issue where Projectile Launch System had no cooldown.

• Bump reaction for friendly NPCs has been disabled.

• Fixed an issue where grappled enemies played voice lines as if the player bumped into them.

• It is no longer possible to perform Gorilla Arms finishers against civilians.

• Fixed an issue where V could get pushed too far by a speeding vehicle.

• If V picks up a body containing a quest item, the item will now be automatically added to the inventory.

• Fixed an issue where a civilian running from a driving player could react incorrectly.

• Picking up or grappling an NPC with a burning or EMP status now transfers the status to the player.

• Improved jacking in interactions with forklifts.

• Fixed an issue where dodging right after the Kerenzikov cyberware effect ended resulted in pushing V a great distance forward.

• Fixed an issue where enemies did not fall on the ground after being killed with Synapse Burnout.

• Fixed an issue where Breach Protocol was not working correctly against Sasquatch.

• Fixed an issue preventing Placide from being taken down in stealth.

• Short Circuit quickhack’s damage over time will no longer finish off defeated enemies.

• Cyberpsychos and minibosses are now immune to Tranquilizer rounds and System Reset Quickhack.

• Fixed an issue where stacking cooldown reduction over 100% could result in blocking quickhacks.

• V can no longer use consumables in situations where scene context would not support it.

• The item for resetting perk points (TABULA E-RASA) can now be bought at a reduced price.

• Fixed an issue where V could get stuck in empty buildings when exiting a vehicle parked close to a wall.

• Fixed the prompt on an unavailable Vehicle door that said “Locked []”.

• Fixed an issue where dumping a body in the trunk started the vehicle’s engine.

• Gorilla Arms damage has been increased by 20%.

• Fixed an issue where disassembling part of a stack granted the number of experience as if the entire stack was disassembled.

• Extending the sliding ladder won’t result in player’s death if they are below it.

• Fixed several door blockers that could make enemy NPCs stuck, preventing them from being killed.

• Fixed an issue that caused NPCs to trip over other NPCs too often.

• Fixed an issue where pedestrians could get teleported after being hit by a vehicle.

• Transmigration trait is now unlockable at Breach Protocol level 20, rather than 16. Players who unlocked Transmigration pre-level 20 and did not yet reach that level will have the trait locked and Perk Points for it restored.

• Getting knocked down by vehicles no longer kills V after unlocking ‘The Rock” perk.

• Fixed an issue where switching the weapon in the inventory two times in a row could result in the weapon not being displayed in-game.

• Fixed an issue where completion of The Wasteland achievement could be blocked under certain circumstances.

• Multiple GPS improvements and fixes for the pathing in various activities and quests.

• Fixed an issue where one of the laser trip mines in Gig: Wakako’s Favorite would not explode upon walking over the laser.

• Fixed instances of NPCs not entering combat when the player approached them in Reported Crime: A Stroke of Luck.

• Fixed an issue where one of the laser trip mines in Gig: Greed Never Pays could not be interacted with.

• Breaking a window during Gig: On a Tight Leash will now properly alarm nearby NPCs.

• Fixed cyberpsycho’s behavior at the beginning of combat during Cyberpsycho Sighting: House on a Hill.

• Fixed AV collision to avoid the player being pushed off or stuck in Suspected Organized Crime Activity: Opposites Attract.

• Fixed River Ward’s behavior while following the player in The Hunt.

• Fixed an issue where enemies at the crash site in Life During Wartime were not able to attack the player at range.

• Fixed an issue where one of the Scavs would not alarm others after finding a body during The Rescue.

• Jackie should no longer use stealth chatter just before combat in The Heist.

• Fixed an issue where an exploding mine would not alarm nearby enemies in Gig: Goodbye, Night City.

• Panam now occupies a different sniping spot during the fight with the Raffens in Ghost Town.

• Fixed an issue where Rogue would idle after the elevator ride in Arasaka Tower during Never Fade Away.

• Fixed an issue in The Pickup where the detonator in All Foods could not be interacted with.

• Jackie will now empty his clip before reloading in The Rescue.

• The cyberpsycho in Cyberpsycho Sighting: Second Chances should now respond to the player attacking at range correctly.

• Corrected use of cover for friendly NPCs.

• Fixed an issue where Panam’s car could get launched into the air in With a Little Help from my Friends.

• Fixed an issue where Delamain cab would launch into the air after leaving Afterlife in The Heist.

• Fixed an issue where other cars in the race in The Beast in Me: City Center could get teleported under certain circumstances causing the player to drop to the last place.

• The car will no longer be misplaced after skipping the ride to the Piez restaurant with Joshua in Sinnerman.

More patch notes can be found on the Cyberpunk 2077 website.