On the surface level, Deep Rock Galactic is just a dwarf shooting game for the bros. Below the surface, it’s an action-packed roguelike puzzle game. There’s more to the game than just shooting and mining. You’ll have to learn how to utilize different class skills to solve unique puzzles that either the game gives you or that your team creates for themselves.

On basic level missions, you only need to shoot, mine a few ores, and call it a day. On more complex missions, you don’t know where you are, a ghost alien you can’t hurt is chasing you, and you’re not sure how to connect the Morkite pipelines without an Engineer. Here are the basics to starting Deep Rock Galactic and what you need to know. 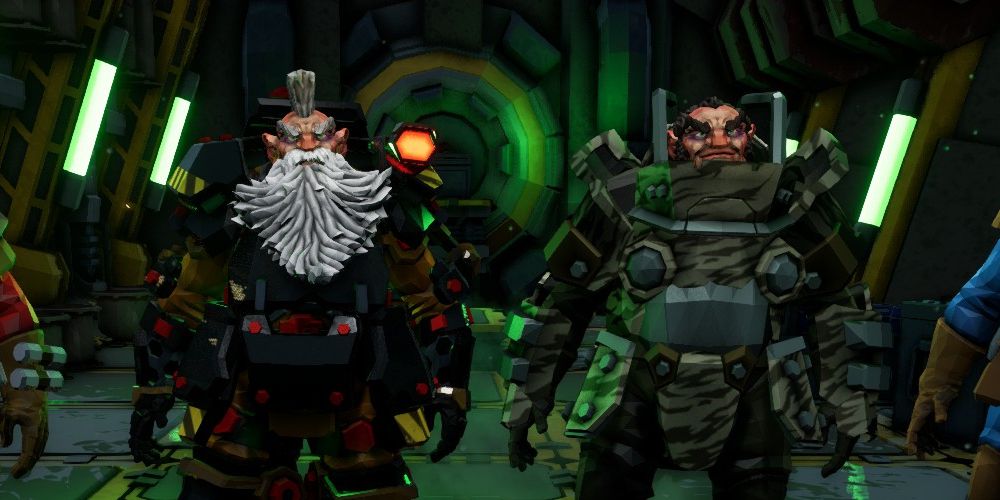 There are four different classes in Deep Rock Galactic. Each has its own unique abilities and weapons. In the tutorial, you play as the Gunner. Probably because gamers are used to shooting up enemies and the Gunner is the best fit for that when explaining the game to new players. Drillers are the most situational and chaotic. Engineers and Scouts are handy and just make Deep Rock Galactic life easier.

You can change your class by accessing one of the two terminals inside your room on the Space Rig. You can also change classes by clicking “Switch To X” when viewing customization at the shop. 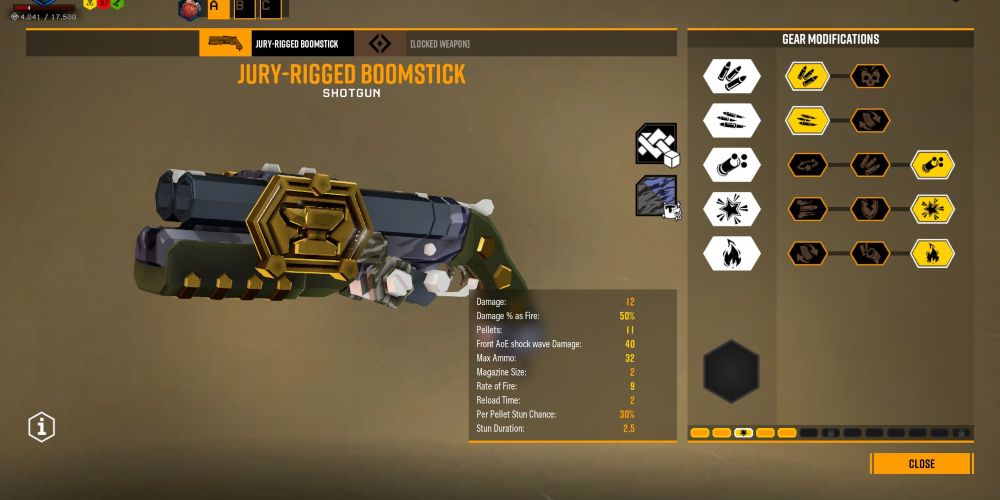 To upgrade your equipment, you need to go back to your home base. Outside your room, there will be many terminals and shops to interact with. To the right of the drop pod, there will be a terminal to enhance your Bosco, your weapons, and your pickaxe. If you’re just logging into the game, it will be to your left.

Bosco will assist you in missions if you’re playing alone. He will mine ore for you if you ping it and he will protect you from enemies. Bosco can also carry large crystals and deposit them for you. This way you won’t have to get slowed down by lugging them around. By upgrading Bosco, you can make him a stronger fighter and a faster miner. If you don’t have any friends who own Deep Rock Galactic or you prefer being a lone wolf, Bosco is a piece of equipment you should invest some credits into.

Upgrading your gear means enhancing damage, adding additional damage, and more. In this menu, you can equip weapon skins and switch your weapons and grenades. If you unlock a new weapon from the Assignments terminal, you will have to select the weapon you’re currently using in the Equipment menu and then select the new weapon, which is found above the gun’s name. The orange boxes being filled up below your gun upgrades are your progression towards new skins and a fully upgraded gun. The more you buy upgrades, the more skins you get. Skins can be equipped by selecting one of the two squares on the left side of the upgrades.

You can’t really upgrade your pickaxe. Everyone’s pickaxe stays the same when it comes to mining. There is a pickaxe customization menu to the left of the Equipment terminal, though. Here, you’ll be able to change the appearance of your pickaxe piece by piece, from its handle to its base, tip, and sides. You can unlock pickaxe customization by finding and looting Lost Packs on missions.

Lost Packs have a one in 16 chance of spawning inside missions. To find a Lost Pack, you first have to stumble upon a random helmet in the ground. You can interact with this, which will start updating your Terrain Scanner and revealing the Lost Pack. This will be a pink object on your Terrain Scanner that you have to dig toward. Along with pickaxe customization, you can also get armor skins from Lost Packs. Lost Packs and Cargo Crates drop customization and loads of ore.

Cargo Crates are another type of one in 16 loot spawns. Instead of a helmet, you must stumble upon the crate itself. You’ll have to find two batteries to power up the crate and open it. To find Cargo Crates, you must listen for the blip noise they make. Cargo Crates will drop victory poses and framework skins for guns. 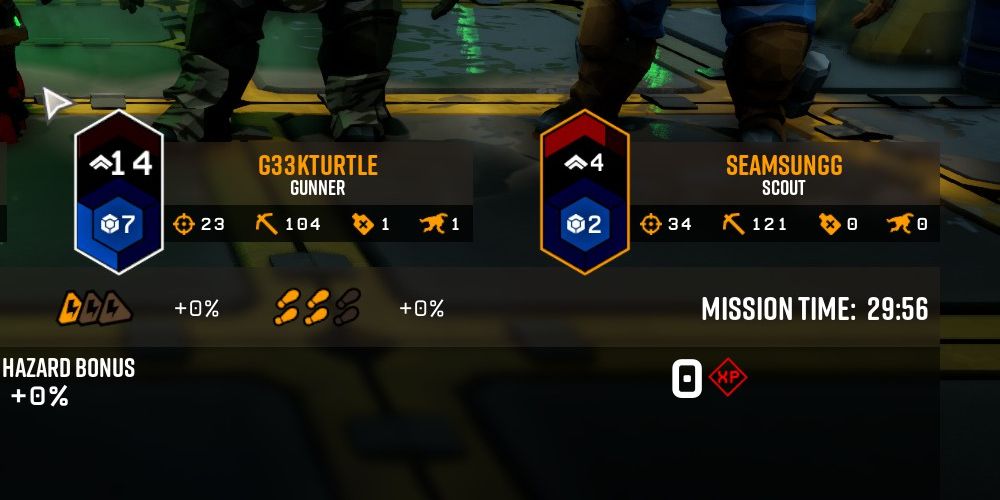 There are two levels you need to keep an eye on when it comes to your dwarf. There are red and blue progression bars. The red bar is your class level. The more you play one class, the more the red rank progresses. Upgrading your class level will allow you to unlock more equipment for that class. The blue bar is your general player rank. This stays the same no matter which class you choose. Upgrading your player rank will allow you to purchase more from the customization shop and will unlock access to other terminals at the base.

You can promote your dwarves. Promoting your Scout or other dwarf means that you’ve hit max level for that class and want more out of it. A promotion allows you to continue upgrading that class and has added benefits.

To promote your dwarf class, you need to be at least class level 25 with them. That’s the red rank. By going to the Memorial Hall in the base, you can find a Promotion terminal at the other end of the hall. You will have to pay to promote a dwarf.

There’s a terminal inside your little room on the Space Rig. One is for switching between classes, the other is to see your player progression and milestones. Milestones are simple things like exploring one biome five times. By completing milestones, you’ll receive perk points. In the next tab, you can spend these perk points. By default, you can only equip two perks. One active, pink perk, and one passive blue perk.

There is a perk you can unlock that’s sole purpose is to unlock another perk slot on your dwarf. It’s called New Passive Perk Slot. Its icon on the perk page is a star. You’ll need to progress through the perks to reach it and then must pay up to 15 points. You can get this at a second tier, allowing four perks to be equipped at once.

To equip a perk, you have to go to the Equipment terminal. Instead of selecting any weapons, you just need to click the squares to the top left of your dwarf.

Important Ores You Should Always Mine 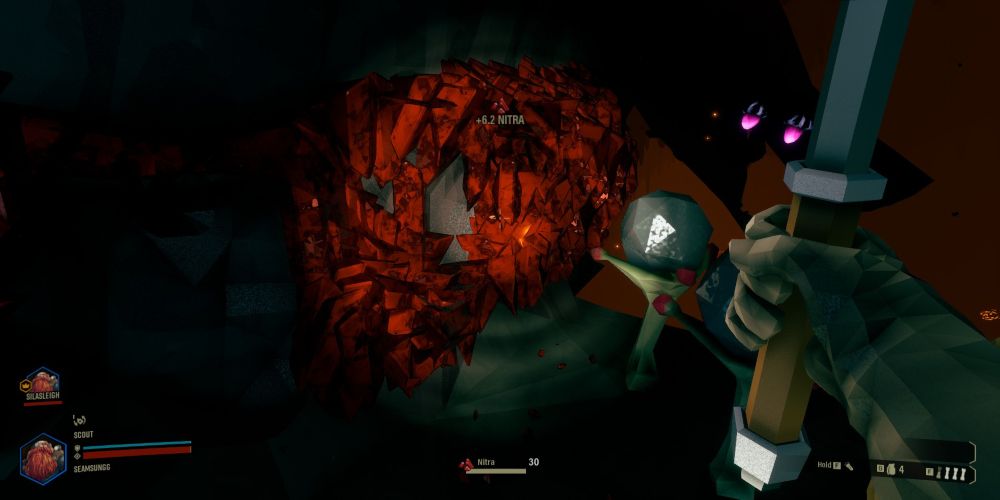 When you start a mission, you’ll have a primary and secondary objective. Sometimes it will be to mine ore and harvest a plant. Other times it will be to steal alien eggs and kill fleas. Either way, you should always go out of your way to mine other ore. Even if it’s not part of the quest. If you collect extra pieces of a primary or secondary goal, you get extra experience.

Aside from extra experience, by mining Gold, you get more money. Gold ore is nothing but credits. You essentially have free credits to mine each mission if you choose to.

Nitra is red ore found on every map. You need Nitra to be able to buy ammo supplies. Your ammo and grenades will run out eventually, especially on harder modes with heavy swarms. You can call in an ammo supply by pressing five on your keyboard. This will cost 80 Nitra. Ammo supplies will also heal some of your health when you resupply.

To upgrade your equipment and buy stuff in the shop later down the line, you’ll need special ores like Magnite, Umanite, Jadis, and more. These will be required alongside credits when upgrading. It’s always important to mine everything you can.

A Guide On Every Classes Support Tools 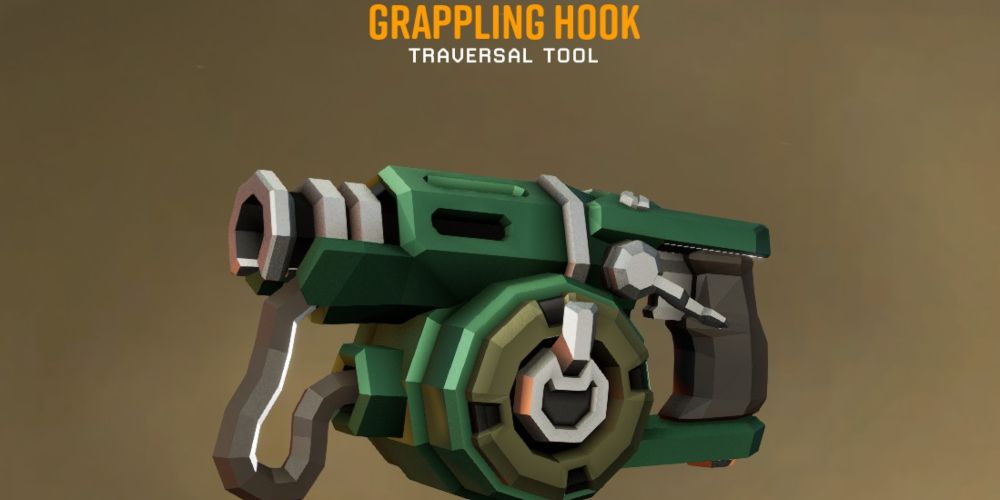 Each support tool is highly useful for different situations. Whatever you find your problem area to be, you should remedy it with a class support tool. Mix and matching support tools make for a fast and easy mission.

Scout has a grappling hook and a flare gun. The flare gun is very useful for larger areas. Every cave is pitch black darkness. Every dwarf has flares and a flashlight, but flares drop to the ground and only last so long. With a flare gun, you can shoot at the highest ceiling and reveal ore, gunk seeds, or other things hanging from the ceiling. Apart from revealing the location of things, the flare gun also makes it easier to traverse through caves and get your barrings. The Scout’s grappling hook is a pretty selfish tool. It only helps him, but it’s arguably the most efficient tool in the game. With the grappling hook, you can zoom across maps and parkour to reach impossible areas or to escape quickly.

Engineer has a platform gun and sentry turrets. The platform gun is priceless. Every cave is procedurally generated. You may be lucky enough to have multiple different levels of terrain or you may be unlucky enough to only have steep pits. With the platform gun, an Engineer can create staircases and support that will allow everyone to get around easily. You can use it to access unreachable spots containing ore or to get better vantage points. During swarms, what’s better than having two sentry turrets helping you take bugs down?

Driller has a massive drilling machine and explosives. You can do without explosives since everyone has grenades, but the drill is the best thing Driller has. This is almost like body armor made to go the distance. With the power drill, you’ll be able to reach inaccessible areas within walls that would have taken way longer to manually mine through with a pickaxe. The power drill digs wider and faster than a pickaxe ever could.

Gunner has a zipline launcher and a shield. He can put down multiple ziplines throughout caverns, almost appearing like a spider web. This will help the entire team get around caves way easier. Setting up ziplines in different locations is a must. The Gunner can also throw down a circular shield everyone can stand in. Combined with the Engineer’s turrets, this makes for an easy time against swarms.

The Basics To Completing Missions 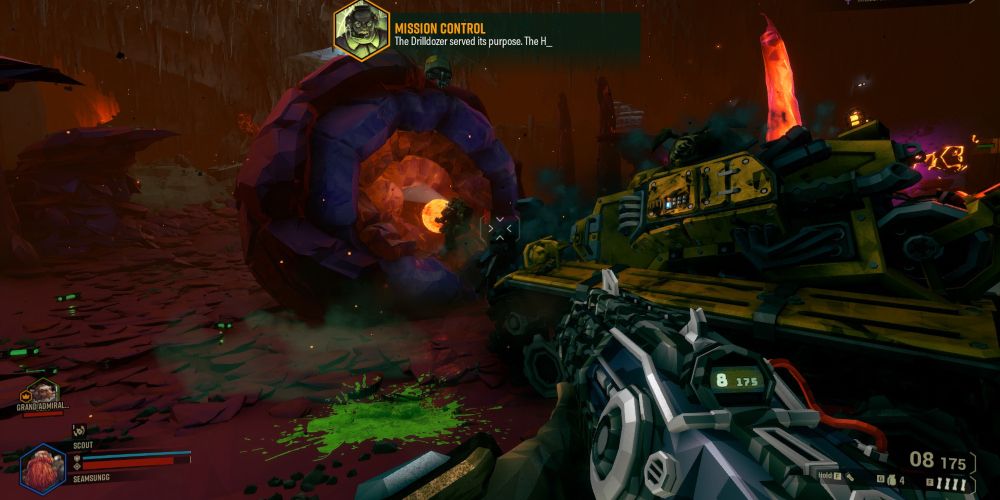 There are various types of missions. The most basic one is easy. Mine a certain amount of Morkite, a dark blue ore, and collect some gunk seeds by shooting weird balls off the ceiling. It can get more complicated.

To select a mission, either hit Tab when at the Space Rig or go to the Missions terminal in the middle of the main area. From here, you can click map locations and then select missions. At the bottom right of the screen will also be a Server List. You can join other players this way.

No matter which mission you choose, there will always be swarms. Even if nothing is happening, the game will send in a swarm here and there to keep you on your feet. Once you’re done with your objective and call for the Drop Pod, an endless swarm will take place each time. All you have to do is survive and make it to the Drop Pod.