Every character is broken to some extent in DNF Duel, and then there's Swift Master and Crusader, who are practically in an entirely different league of overpowered. Since we already covered the reasons Swift Master is busted, it's time to roll up our sleeves and get into the bulkiest Trapper Fighter in fighting game history.

Despite having his Infinite Combo patched, Crusader is still one of the best overall characters in DNF Duel, mainly because of his absurd aerial projectile, towering holy great hammer, and ability to summon in walls to trap his opponents. He has so many phenomenal options at his disposal that his large health pool just seems like he's taunting us at this point. Still, he's fun to play and frustrating to play against, so it's crucial to learn what he can do.

Crusader is a powerful character with many downright absurd Skills. If you wanted a brief rundown of his Command List before diving into this guide, then we have you covered! 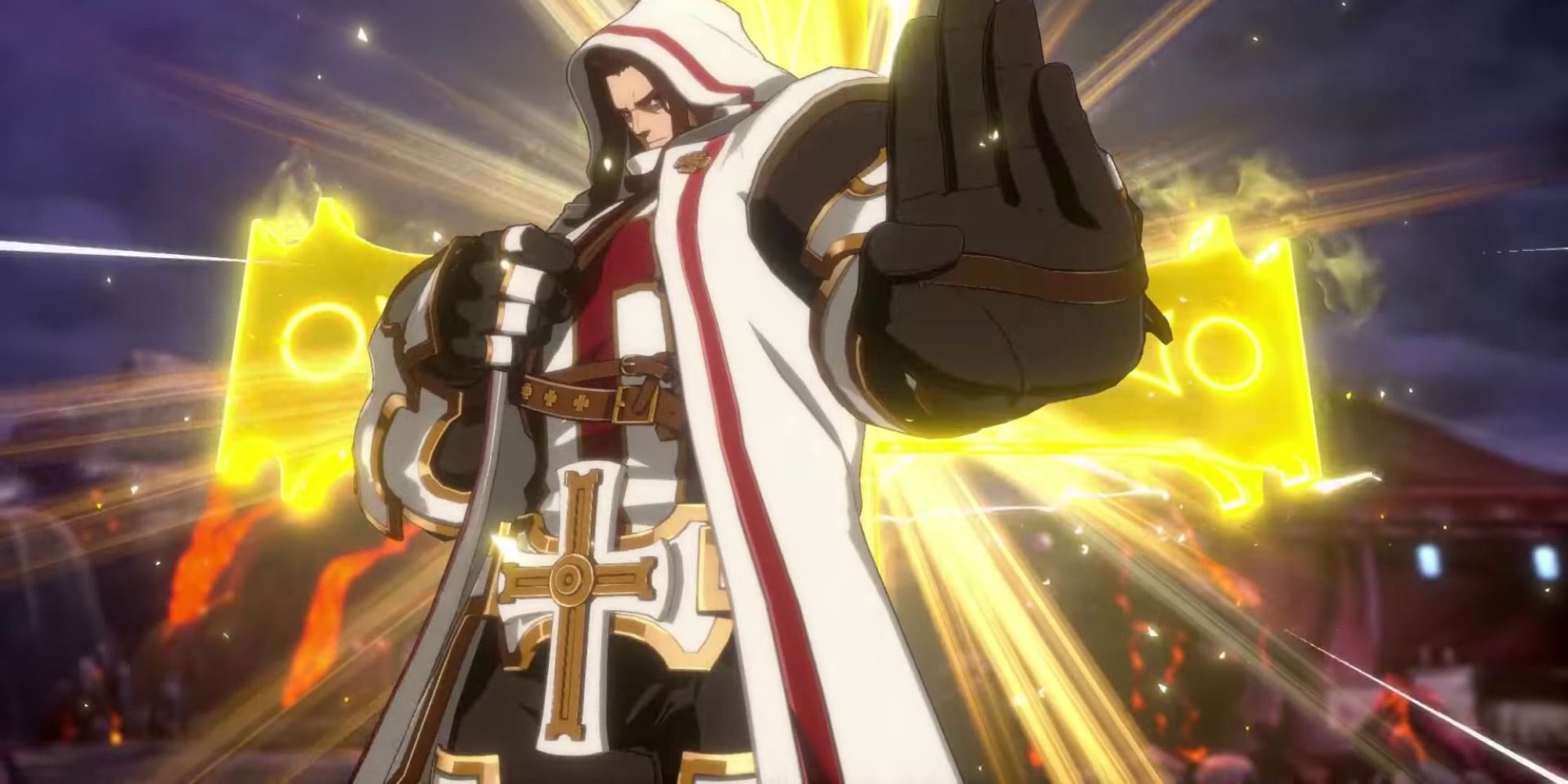 Crusader is an absolute unit of a character and one of the few Trapper archetypes in the game, making him uniquely powerful and challenging to deal with due to his large health pool and ability to lock his opponents into uncomfortable situations. If that wasn't enough, Crusader also has several projectile options that allow him to control the space in front of him, which seems a bit extra if you ask us.

Calling Crusader 'strong' is an understatement, as he has so many things to work with that make it near impossible to close in on him or get anything going. Furthermore, he has the highest Guard Gauge in the game and is tied for having the most health, solidifying him as one of the most durable and hard-to-kill characters. Crusader is a tank of a man and is here to wreak havoc on anyone that crosses his path.

If you're new to DNF Duel or need to brush up on the game's terminology and notations, please check the table out below, which has information on in-game commands, inputs, and common terms. We will be referencing lots of what's here throughout this guide, so being familiar with the general jargon will be helpful! 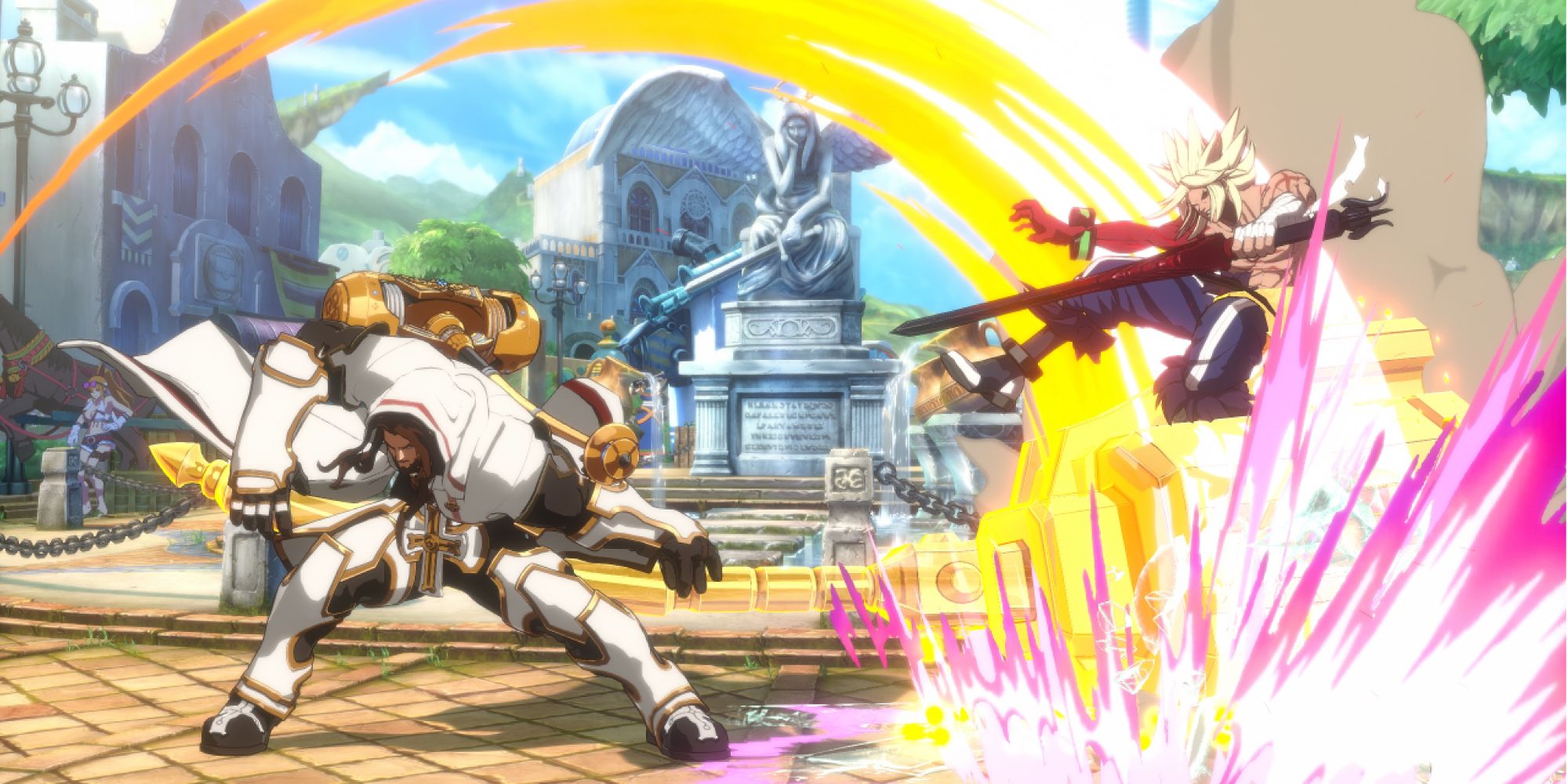 Like most other character's in DNF Duel, Crusader's Special Moves (Skills) act as his 'Heavy Attacks' and can chain into one another or into his Mana Skills, making them an excellent way to extend combos. His overall attack string will also follow the traditional 'Ascending' pattern (A > B > S > MS). While Skills can chain into other Skills, your goal is to ultimately use Skills to get to Mana Skills, which will typically end the attack string. Crusader surprisingly doesn't have many Skills to work with but what he does have access to are all phenomenal, making them crucial to his setups and gameplay. 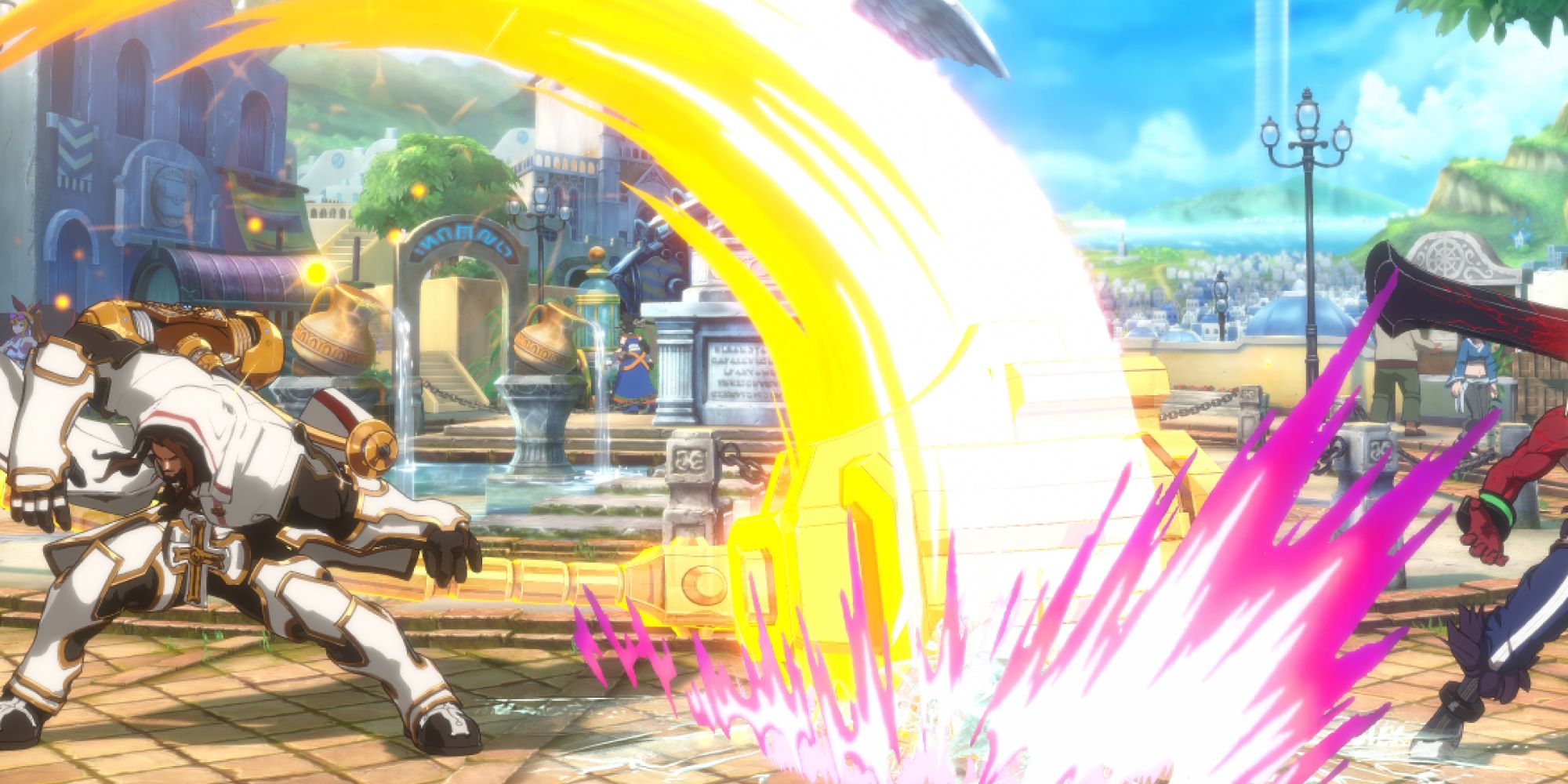 Hammer of Repentance is Crusader's 5S and has him swing his great holy hammer downward with tremendous force, reaching nearly the entire length of the stage. This is typically used as his poke and anti-air option but can also extend combos because it is an OTG attack. While Hammer of Repentance is Air-OK, it's seldomly used as it is very situational and has far more downsides than positives, making it often ignored. 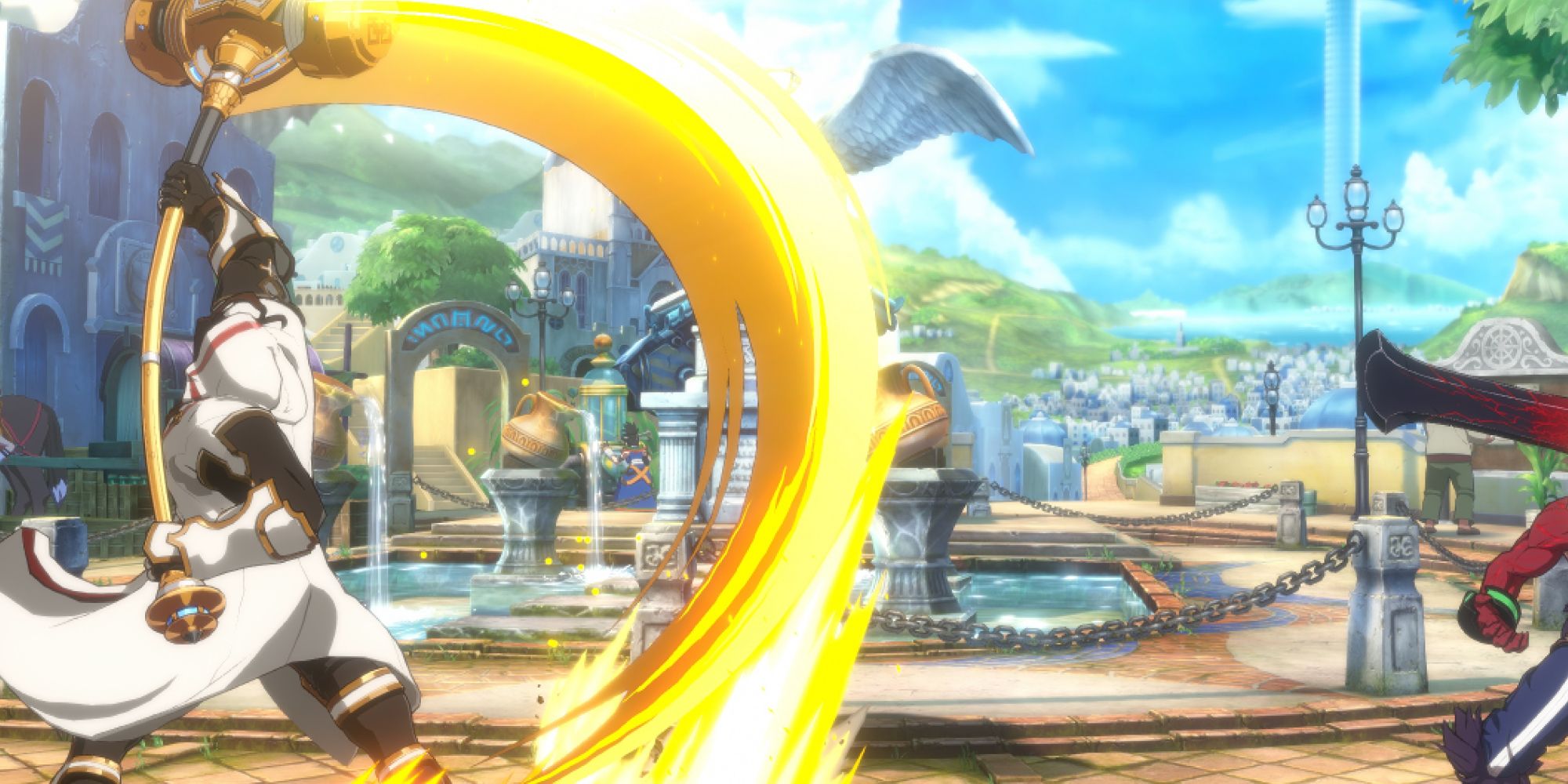 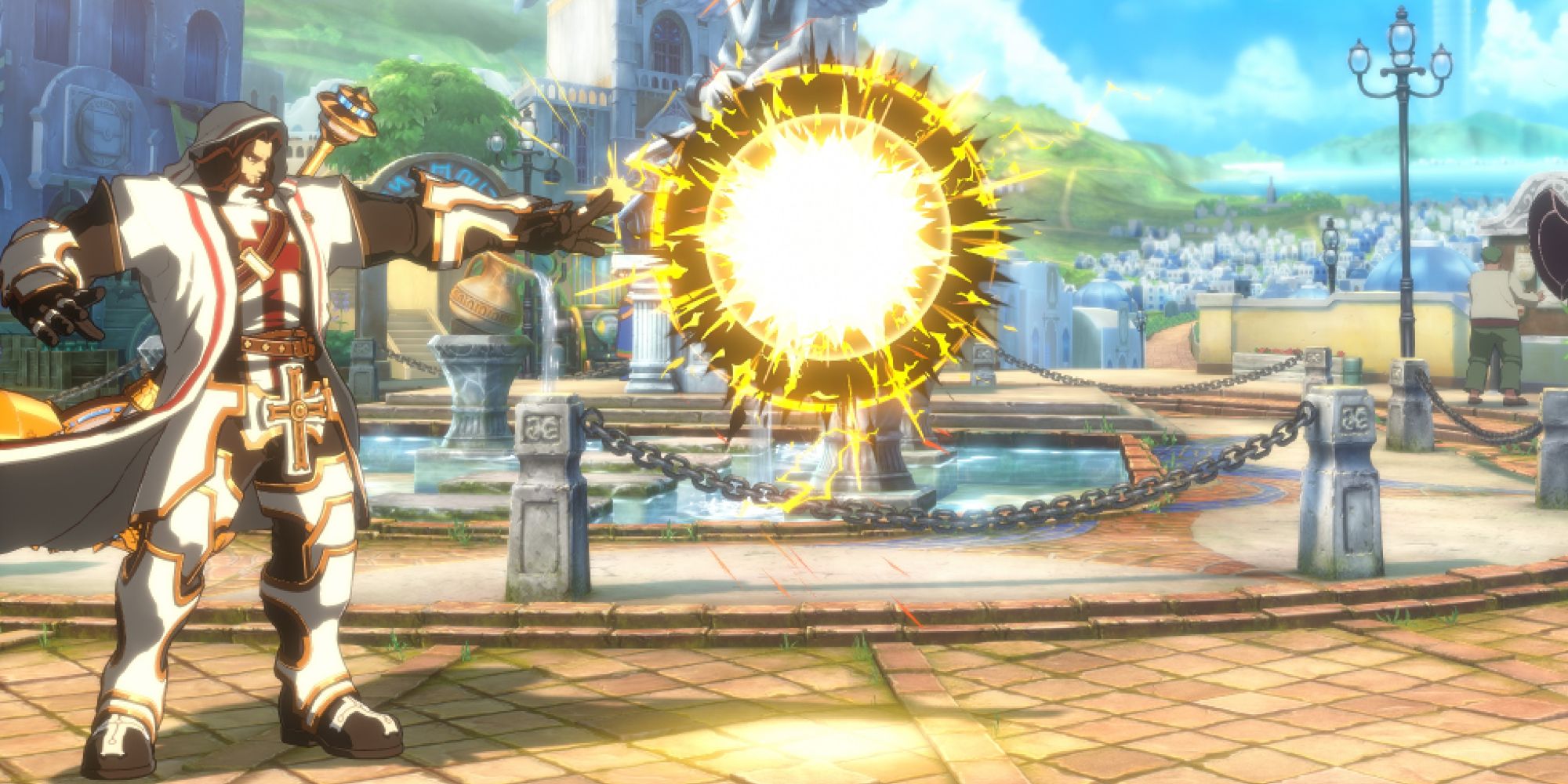 Flash Sphere is Crusader's 6S, a slow-moving but large ball of light that travels across the entire stage. Despite its crawling speed, Flash Sphere allows Crusader to control the space in front of him and force his opponent to react to it, potentially trapping them in place, especially if his wall is up. Though seldomly used in combos or attack strings, Flash Sphere is an excellent ability to toss out if you need to back your opponent down and regain map control. 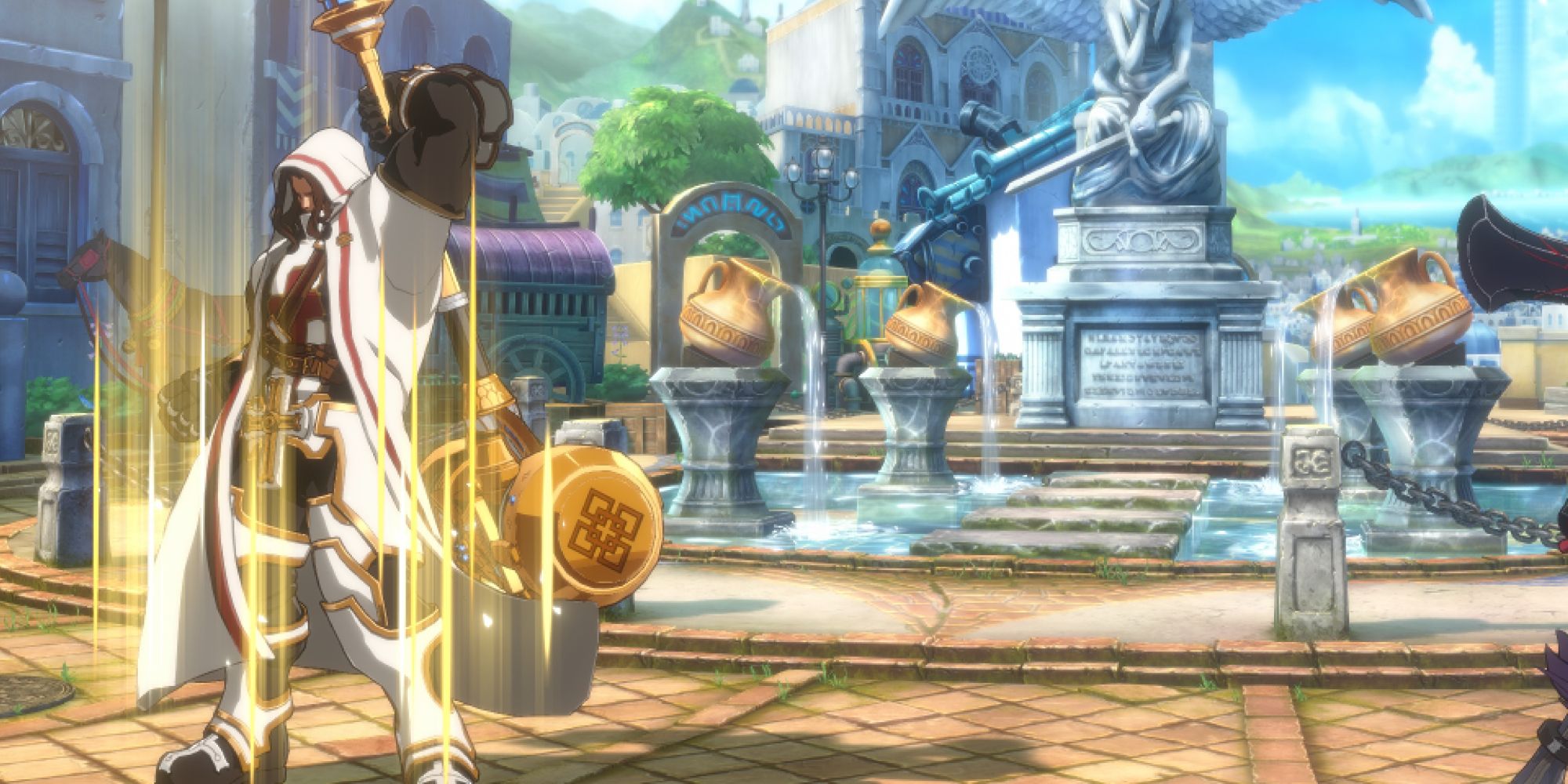 Saint Counter has Crusader take a defensive stance while bathing in holy light. If an enemy strikes him during this animation, he will counter their attack, launching them across the stage, which can then be followed up with Hammer of Repentance to start a combo. While a powerful Skill, Saint Counter will not work against lows, throws, or projectiles. Saint Counter is Crusader's 4S command. 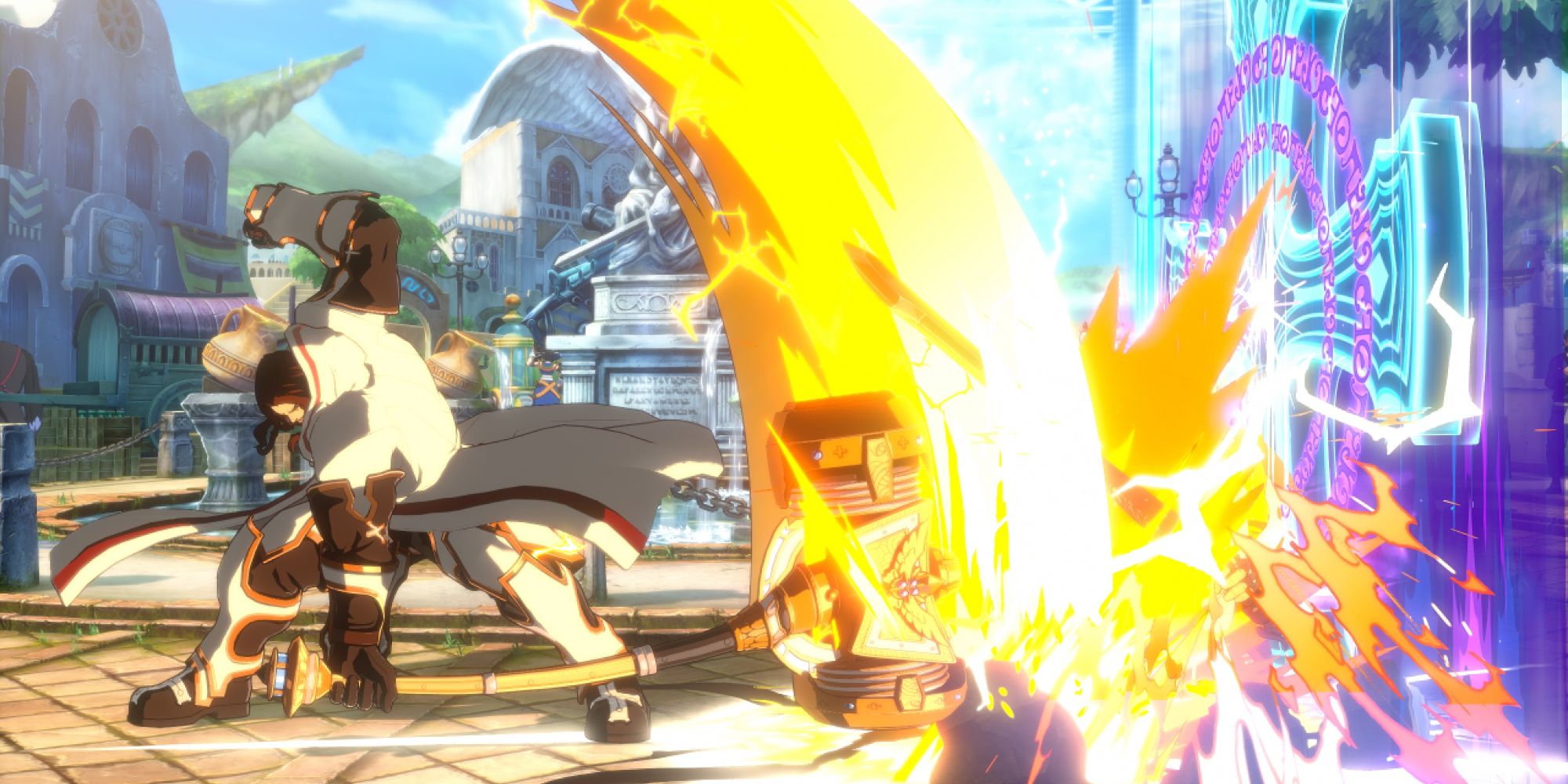 While every character's MP Special Moves (Mana Skills) are their best buttons, Crusader's Mana Skills are on another level of importance. Unlike his standard Skills, Crusader has access to many Mana Skills, all of which contribute to his wickedly punishing playstyle. Before we dive into them, for the uninitiated, Mana Skills are resource-based attacks that consume Mana (MP) upon use. Managing this resource is your top priority and focus throughout the match, as you can overshoot your allotted amount and enter an 'Exhausted' state. When in this state, you will be unable to use Mana Skills until your Mana regenerates, which will be slightly delayed. 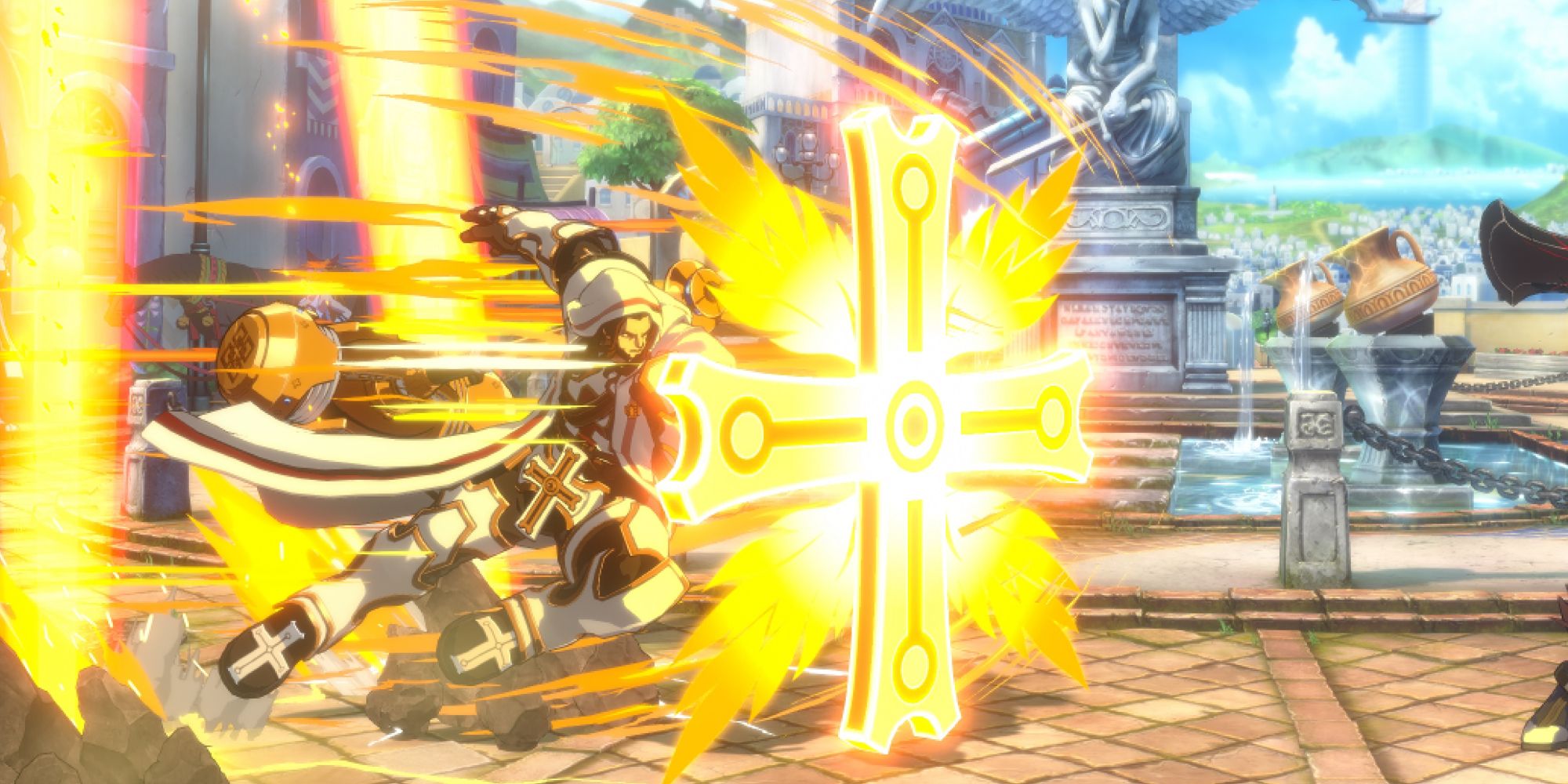 Miracle Splitter is Crusader's 5MS, costs 60 MP to use, and has him charge forward with a holy cross erected in front of him as a shield. Once he's done charging, he will swing his great hammer upward in an arc motion, launching his opponent on contact. Miracle Splitter is an excellent way to extend specific combos or to close the gap between you and your opponent, especially when considering the dash portion of this Mana Skill absorbs all projectiles. 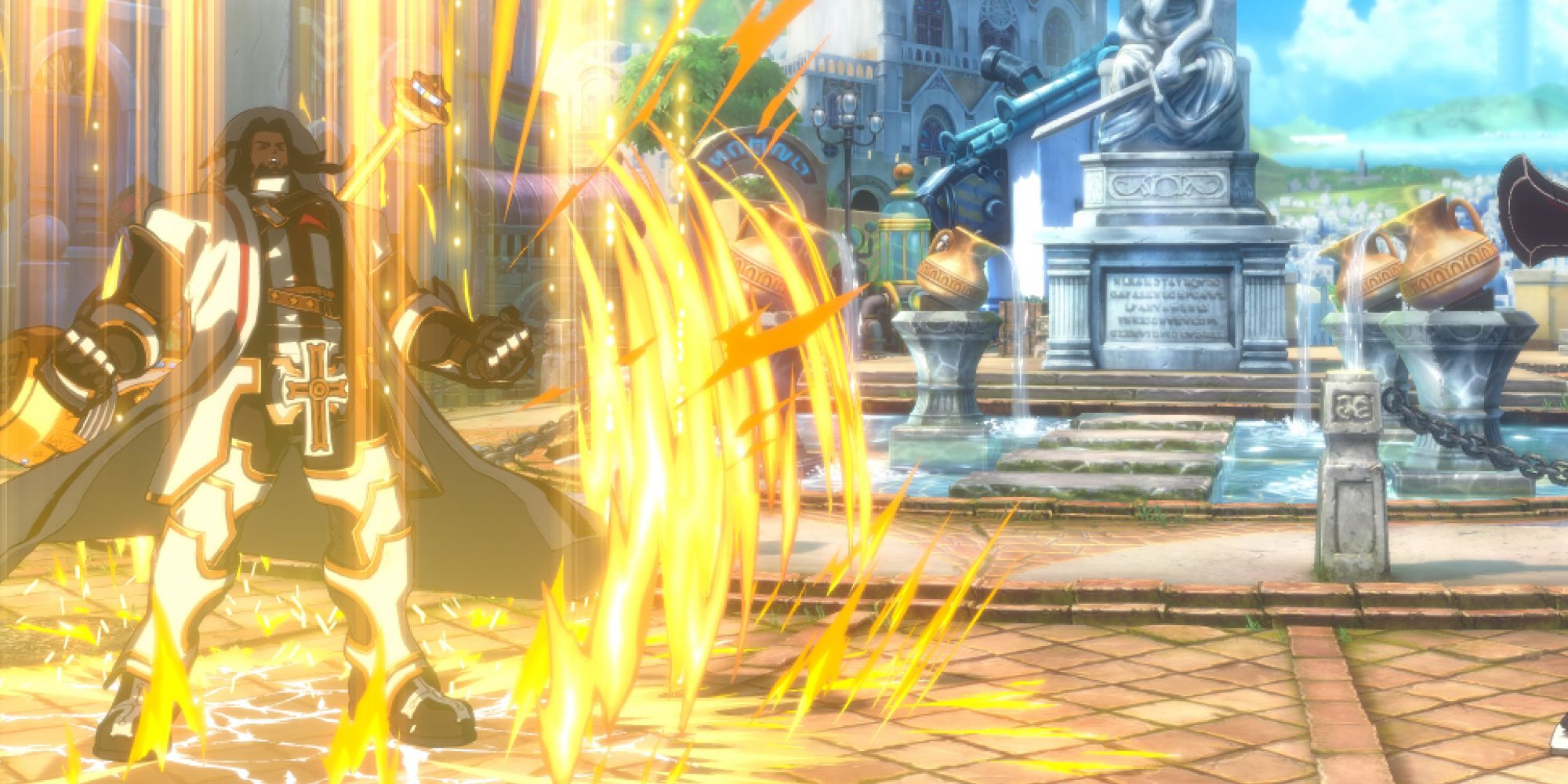 Hapitism is Crusader's invincible reversal option and an excellent anti-air option as a result. This Mana Skill grants Crusader three hits of Super Armor for the duration of the attack, but he will still be vulnerable to tosses, which will be challenging to pull off but is still possible. If Hapitism hits an opponent, it will launch them across the stage, allowing Crusader to follow up with his far-reaching attacks such as Hammer of Repentance. Hapitism costs 70 MP to use.

Some Mana Skills can be executed by either inputting a 'simple' command or using Motion Inputs found in most traditional fighting games. If you opt to use Motion Inputs, your Mana Recovery Speed will be slightly increased, allowing you to perform Mana Skills somewhat faster than average. Haptism can be performed either with 2MS or 623MS (⭢⭣⭨MS). 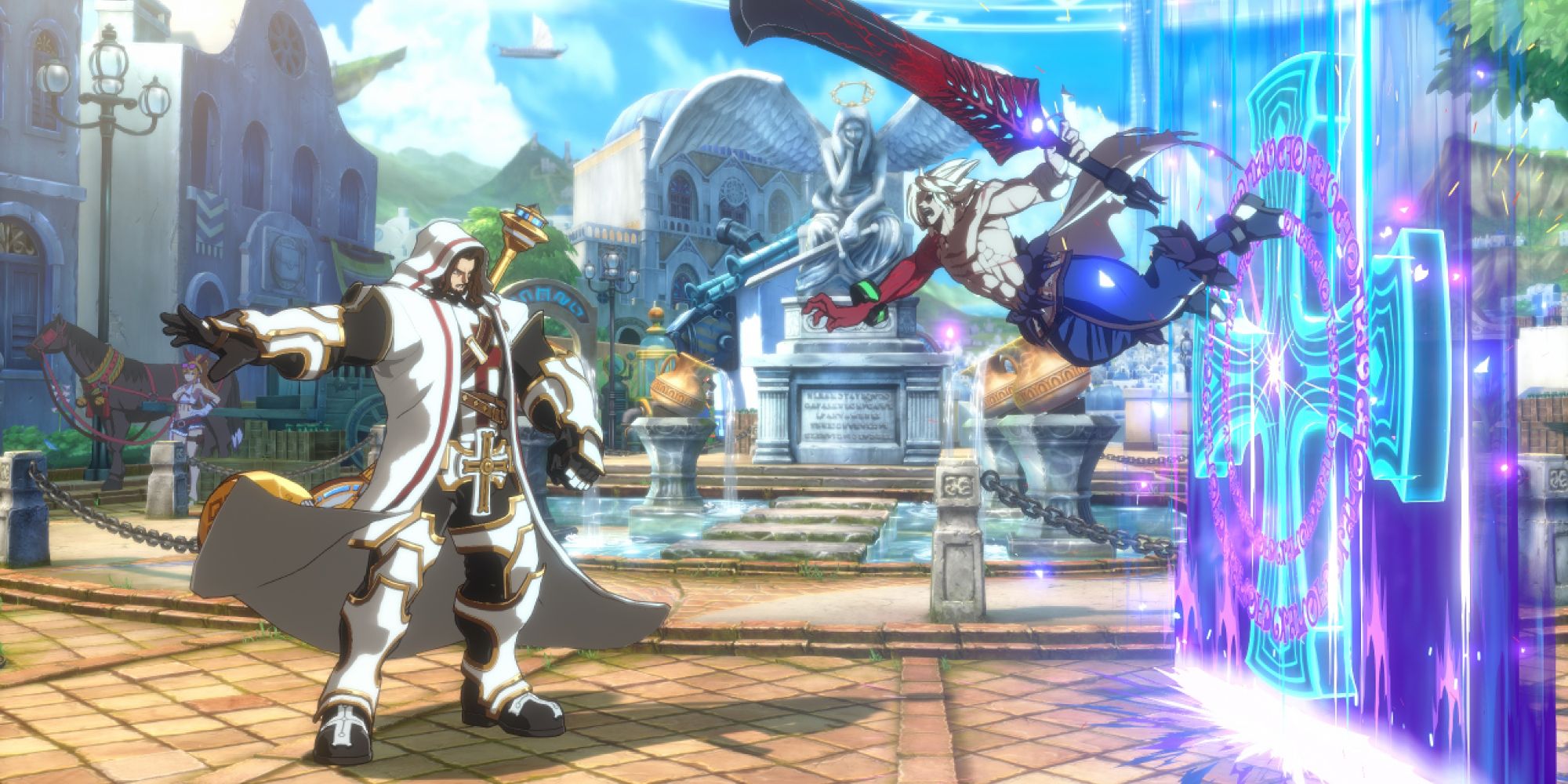 Deflection Wall is Crusader's most valuable and crucial tool at his disposal. For 50 MP, Crusader can erect a wall at his opponent's current location, which will launch and bounce them towards him for easy follow-up attacks. The vertical range of the wall is seemingly unlimited, making it impossible for opponents to escape. Furthermore, Deflection Wall gives Crusader access to a metric ton of new combos, juggles, and blockstrings.

Some Mana Skills can be executed by either inputting a 'simple' command or using Motion Inputs found in most traditional fighting games. If you opt to use Motion Inputs, your Mana Recovery Speed will be slightly increased, allowing you to perform Mana Skills somewhat faster than average. Deflection Wall can be performed either with 6MS or 236MS (⭣⭨⭢MS). 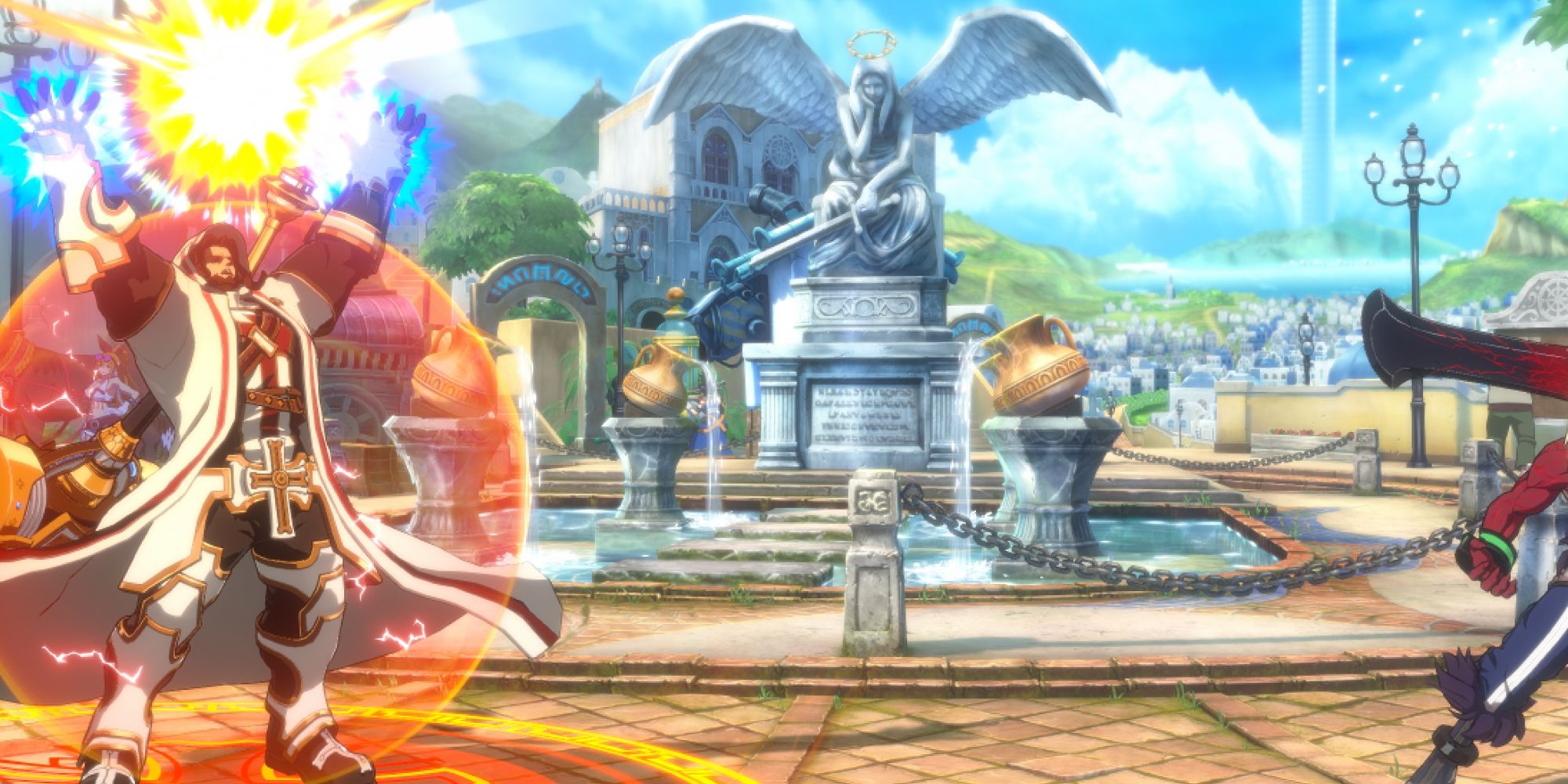 Grace of Lemidios is Crusader's Install Ability, which grants him Super Armor and other actions. Grace of Lemidios lasts for eight seconds and enables the actions 'Strike of Repentance' and 'Apocalypse.' Furthermore, some actions automatically gain lightning follow-up properties, allowing for stronger combo opportunities and increased damage. These actions are 5B, 2B, Hammer of Repentance, and Spear of Victory. Due to Grace of Lemidios being a powerful buff, it costs 90 MP.

Some Mana Skills can be executed by either inputting a 'simple' command or using Motion Inputs found in most traditional fighting games. If you opt to use Motion Inputs, your Mana Recovery Speed will be slightly increased, allowing you to perform Mana Skills somewhat faster than average. Grace of Lemidios can be performed either with 4MS or 214MS (⭣⭩⭠MS). 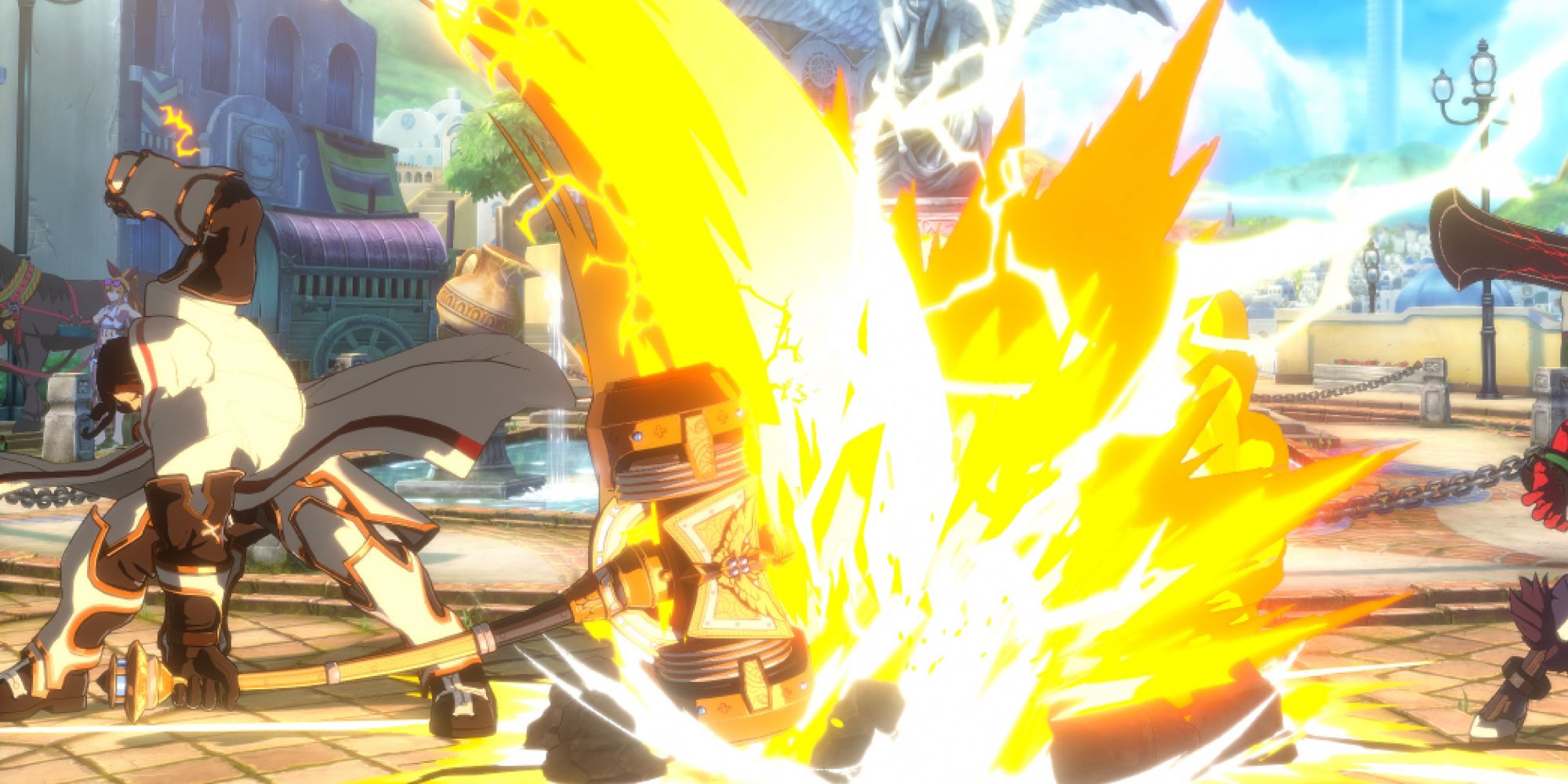 Strike of Repentance is only available to Crusader during Grace of Lemidios and costs 50 MP on top of the 90 MP you have to spend to activate the buff. This Mana Skill has Crusader swing his great hammer downward and into the ground with unbelievable force, inflicting the 'Shock' debuff on anyone hit by it. Shock will disable his target's ability to jump, severely limiting their options. Strike of Repentance won't reach as far as Hammer of Repentance, but it does hit OTG, enabling combo extension.

Important: Using this action will remove the Grace of Lemidios buff.

Some Mana Skills can be executed by either inputting a 'simple' command or using Motion Inputs found in most traditional fighting games. If you opt to use Motion Inputs, your Mana Recovery Speed will be slightly increased, allowing you to perform Mana Skills somewhat faster than average. Strike of Repentance can be performed either with 4MS or 214MS (⭣⭩⭠MS).

Remember: Strike of Repentance can only be executed when Grace of Lemidios is active, which is why they share the same input. 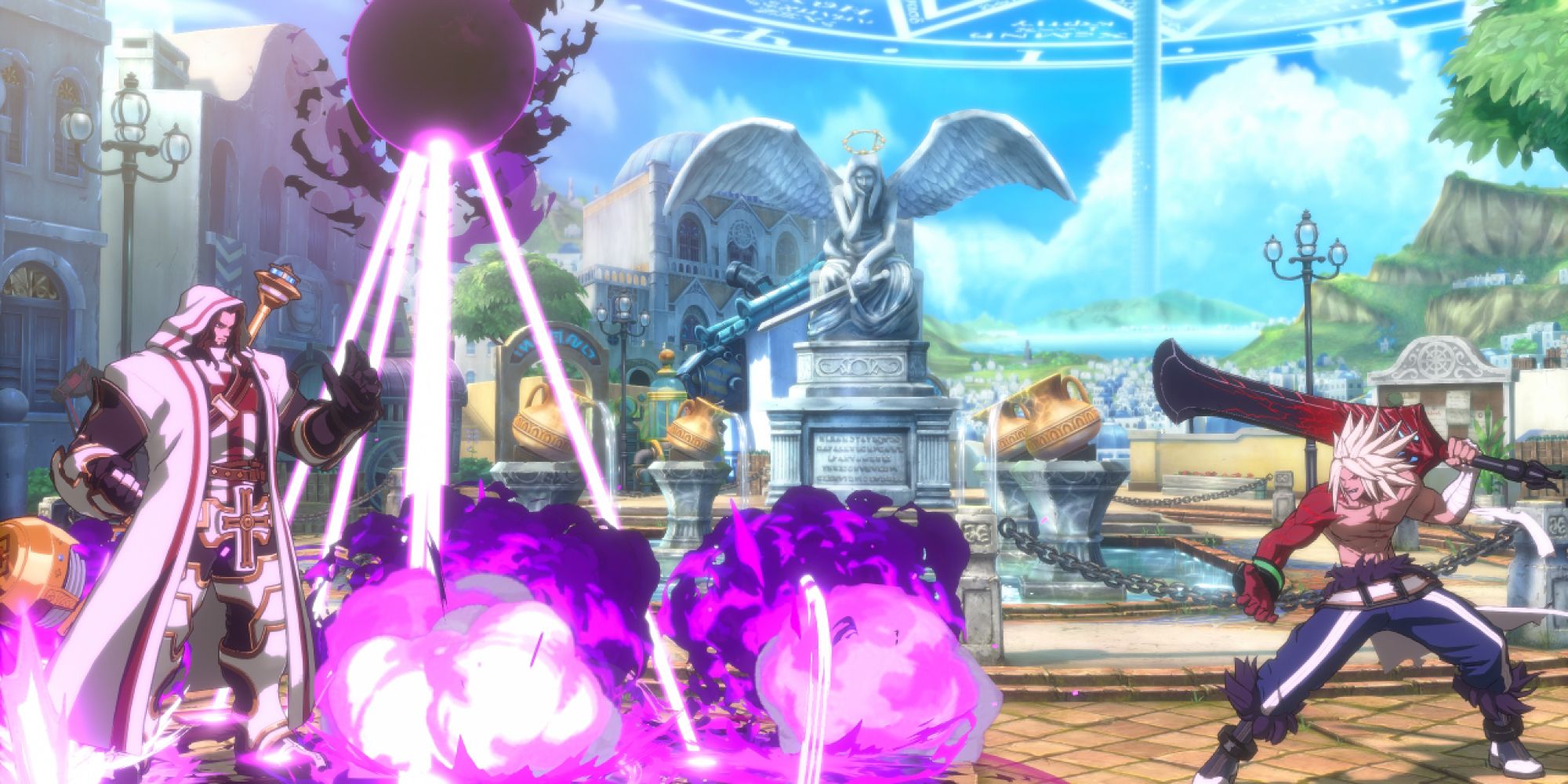 Apocalypse is only available to Crusader during Grace of Lemidios and costs 90 MP on top of the 90 MP you have to spend to activate the buff. Crusader sends an orb of light high in the air that rids him of any ailment or debuff he may have. Shortly after, the orb turns dark purple and fires off several lasers onto the ground beneath it before exploding. Apocalypse enables Crusader's throw to have combo potential and also hits OTG, allowing for combo extension. Even on block, Apocalypse can deplete 80 percent of your target's Guard Gauge. However, the one downside to this Mana Skill is that it will disappear if Crusader is hit during the orb's light phase. Otherwise, once it's fully activated, it will remain in play.

Important: Using this action will remove the Grace of Lemidios buff.

Some Mana Skills can be executed by either inputting a 'simple' command or using Motion Inputs found in most traditional fighting games. If you opt to use Motion Inputs, your Mana Recovery Speed will be slightly increased, allowing you to perform Mana Skills somewhat faster than average. Apocalypse can be performed either with j.4MS or j.214MS (j.⭣⭩⭠MS).

Remember: Apocalypse can only be executed when Grace of Lemidios is active. 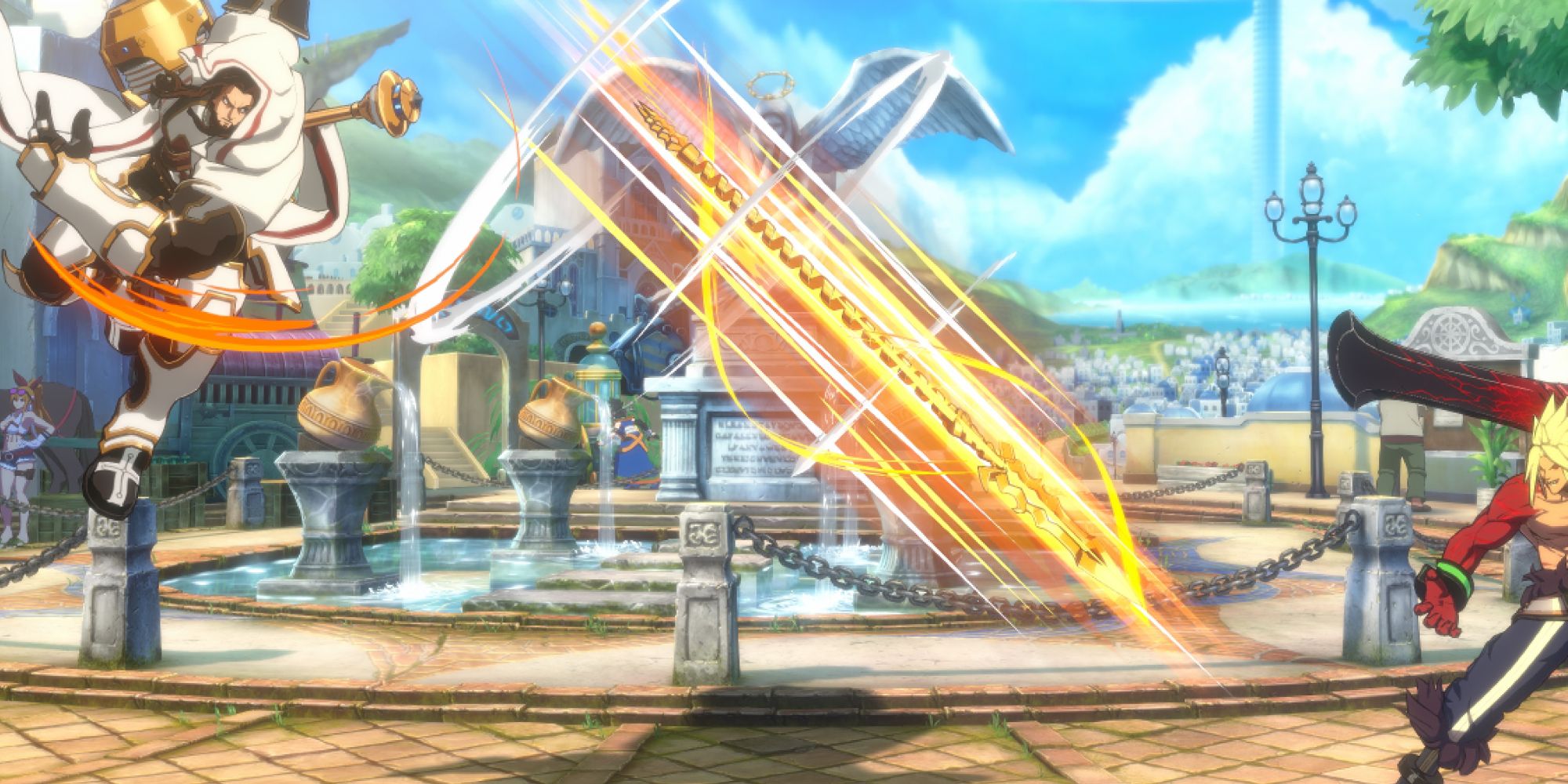 Spear of Victory is Crusader's j.MS action that costs 30 MP and has him hurl a holy spear of light downwards at a sharp angle with tremendous force. Additionally, whenever the spear touches the ground, it will explode, causing combo opportunities on hit. This Mana Skill is excellent for controlling space and keeping your opponent locked in place. 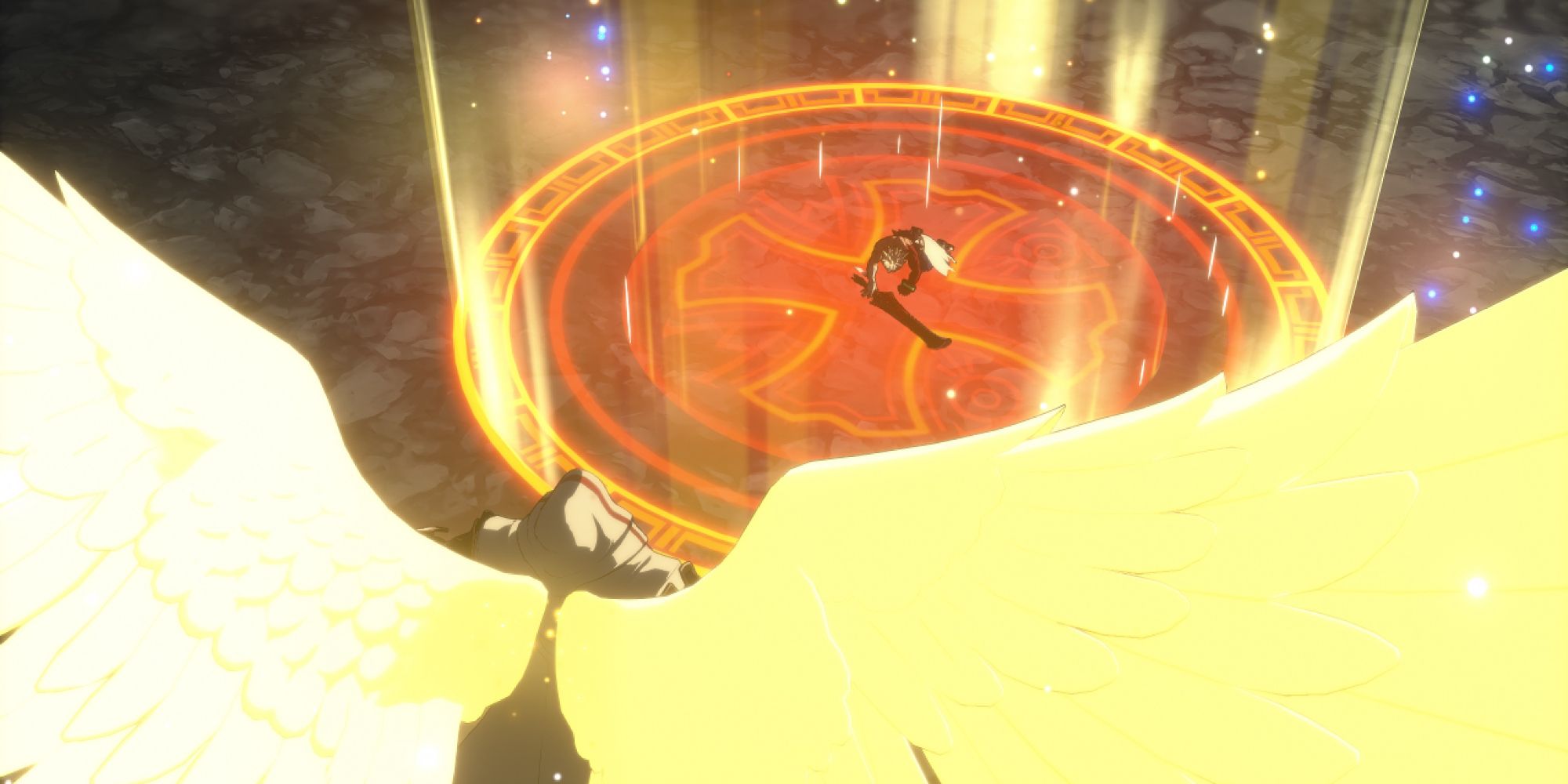 It's finally time to talk about Crusader's Awakening Skills and Effects, which are tied to DNF Duel's 'Awakened State' mechanic, activating whenever you are close to death with 30 percent or less health left. For those unaware, Awakening Skills are DNF Duel's cinematic 'Super Abilities.' While Awakening Effects are passive enhancements that will give your character a slight advantage in combat to turn the tables. While this serves as the game's only comeback mechanic, it also makes the closing seconds of the round incredibly tense and exhilarating as both players can be in the state, having the opportunity to land a devastating attack to close out the game.

Ascencion is Crusader's Awakening Skill which has him swing his great hammer down towards the ground, generating a large shockwave on impact. Since the shockwave has excellent verticality, Ascencion is best executed whenever you weave it into juggles or combos.

Merciful Strength is Crusader's Awakening Effect and turns him into an even more unstoppable tank. All incoming damage will be reduced by ten percent when this passive is active, including chip damage. Crusader will also recover his White Health at a rate of 300 percent. This is one of the best passives in the game and fits Crusader's playstyle perfectly.