Villedor, the city where Dying Light 2: Stay Human takes place, is a pretty unsafe place to live. Not only do thugs roam the street preying on the weak, but the infected are pretty much everywhere you look, waiting until night falls to feed.

Since Villedor is the last bastion of humanity, their citizens must look out for their own, so when someone goes missing, alarms start to raise. That's precisely the case in the side quest "True Friends," where a worrying mother asks Aiden to search for her missing kids. 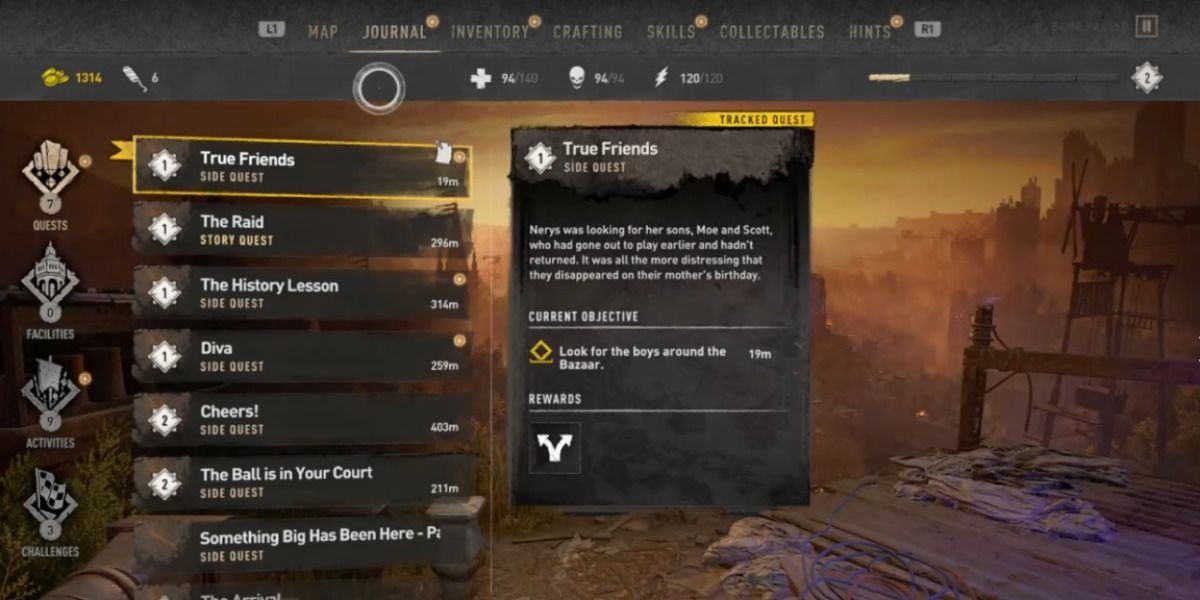 The first thing you need to know is that this Side Quest has three requirements:

The Only Way Out and Unruly Brother are both Story Missions, so there's no way you can miss them. As for Domenik, he is the little kid shouting for his dog in the outside area of the Bazaar. Below you'll find a picture so you can quickly identify him. 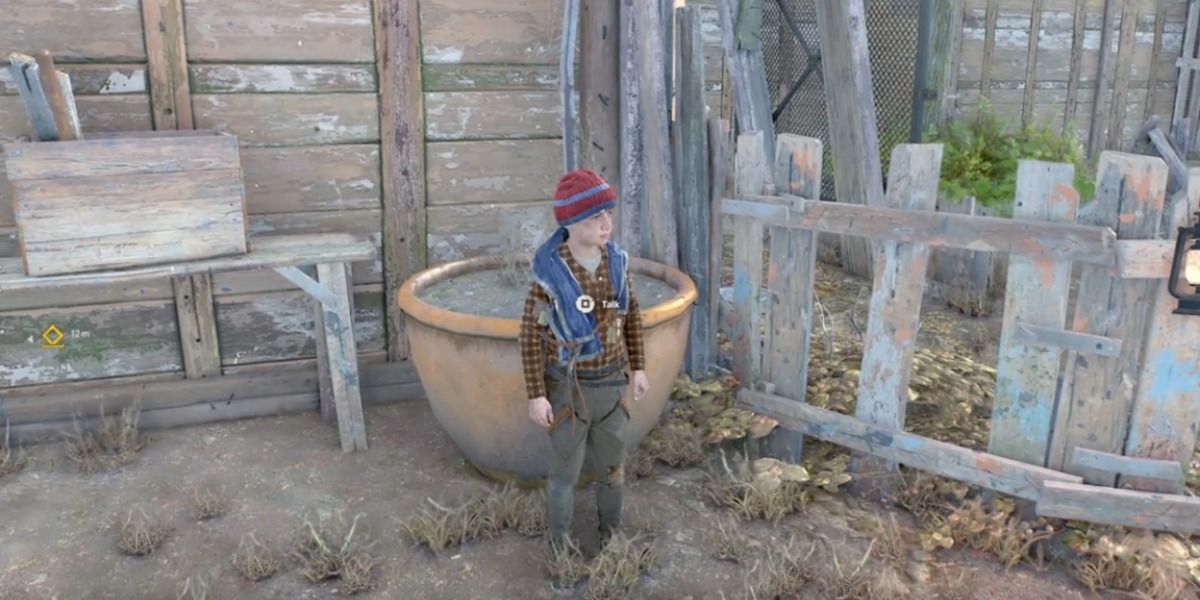 This side quest requires entering a Dark Zone and fighting mutated infected. It would be best if you went in prepared with high damaging – and modded- weapons, a few Molotov Cocktails, Medicine, and UV Shroomz or Immunity Boosters.

How To Start The Side Quest "True Friends" 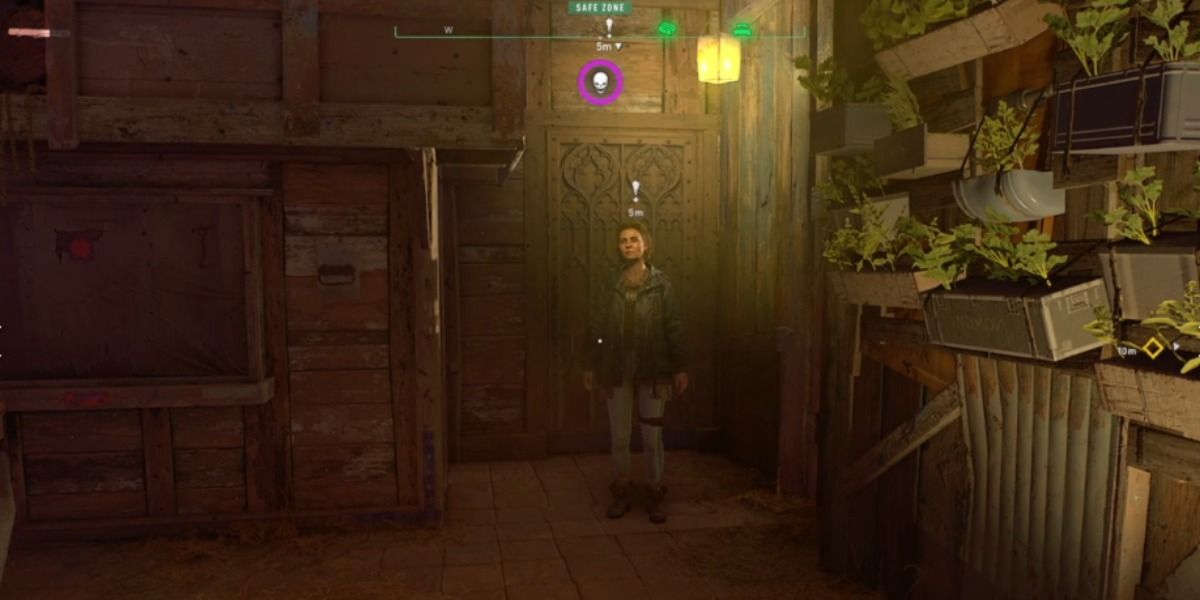 After completing all three requirements, you should find a woman named Nerys inside the Baazar, talk to her, and she will tell you her kids are missing and ask for your help.

Once the conversation is over, head to the outside area of the Baazar, look for Domenik (he'll be highlighted in green if you use your survivor sense) and talk to him.

The kid will try to get you to look for his missing dog but keep talking until he tells you Nerys' boys could be at King William IX Road in the Horseshoe district.

How To Find Moe and Scott 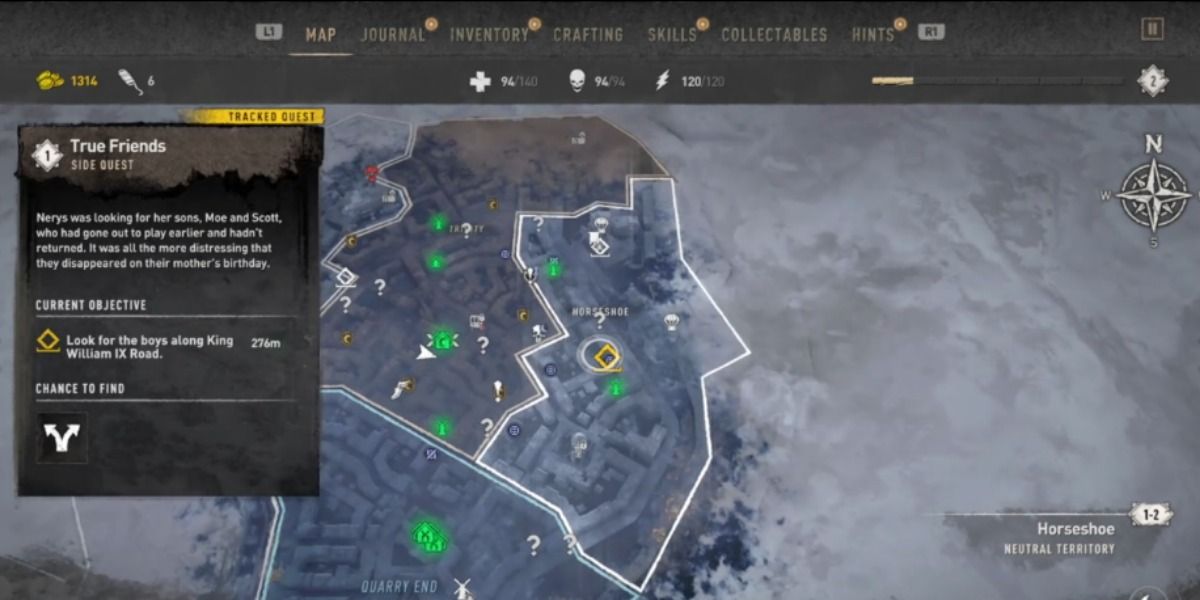 Track the mission and follow the yellow marker until you reach King William IX Road. Once you get there, look around until the objective changes from "Look for the boys" to "Investigate the screams." You should look for a green military building, head inside, and open the door.

Scoot, the eldest of Nerys' sons, will come out saying that his little brother, Moe, is still inside. Afterward, the building's entrance will open for you to enter anytime.

Since this area is a Dark Zone, you should wait until night falls to go in as there will, hopefully, be more infected outside than inside the building. 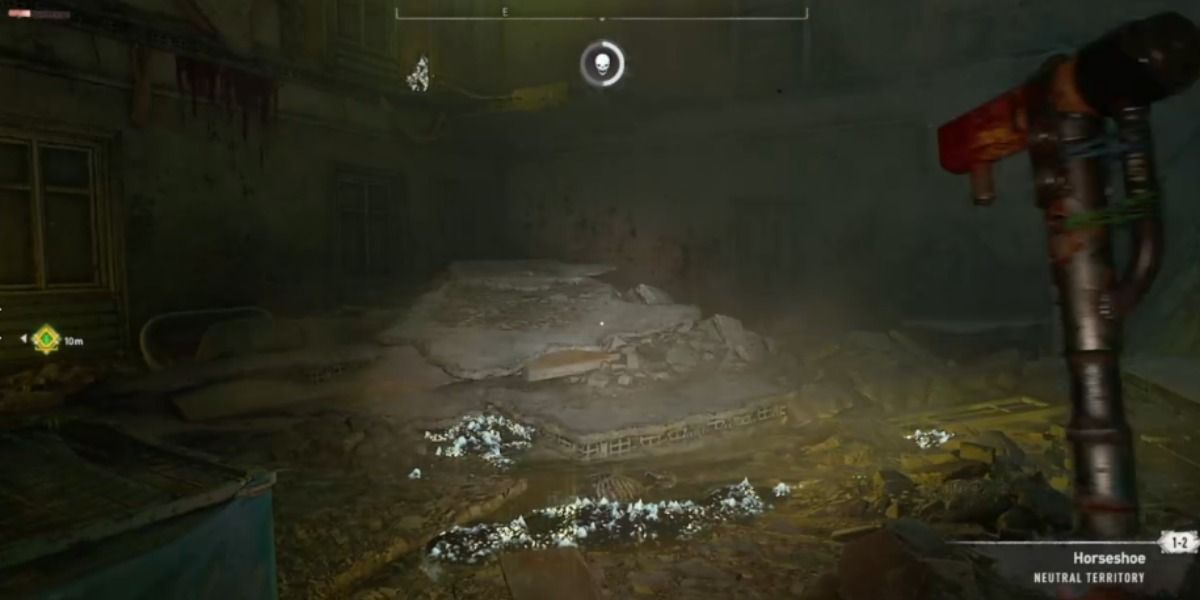 Enter the Dark Zone and crouch to access the room to the right, be careful as there are infected inside; some of them are Runners, and they will spot you more quickly than normal infected.

Fight the infected or sneak past them and go to the room on the left; from there, you have to go up. Look for the yellow piece of fabric shown below and jump to the floor above.

Once on the second floor, look to your left and use the monkey bar to get to the other side of the room and climb up. 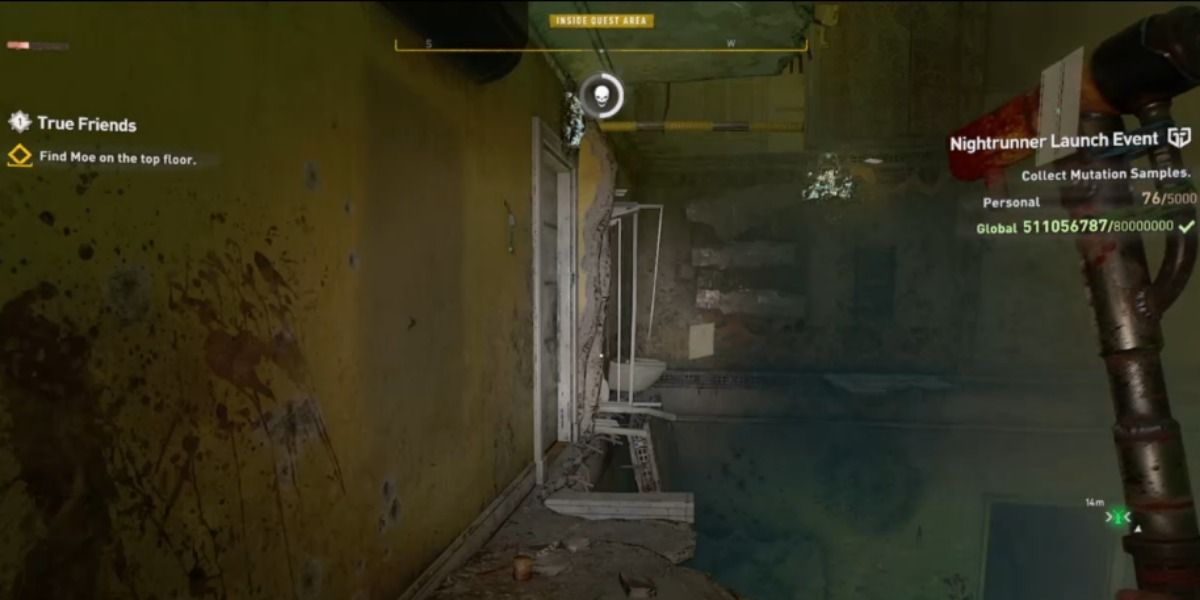 Dark Zones usually have high valuable loot inside, take your time and explore around if you have the time.

You will be now on the third floor. From there, deal with the two infected right ahead and then crouch to enter the room on the left. 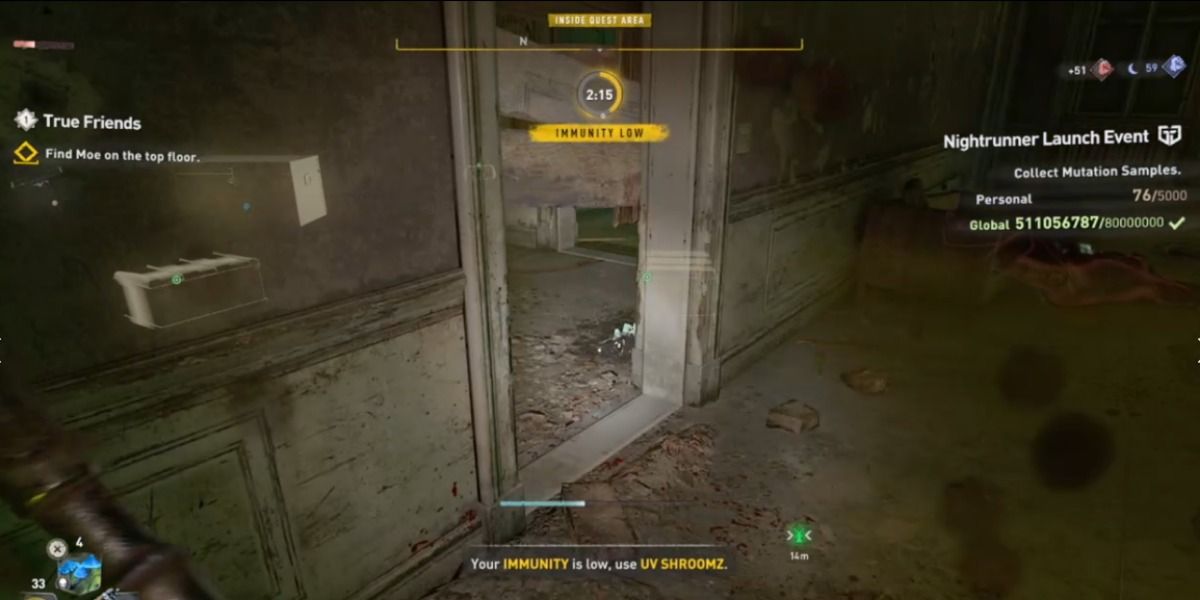 In this room, you will see Domenik's dog whimpering and lying on a couch. Open the door to your left to find Moe.

The kid will tell you that the infected that attacked him and his brother is still out there. Head back outside the room and fight whatever is out there.

Fighting The Infected – Should You Leave The Dog? 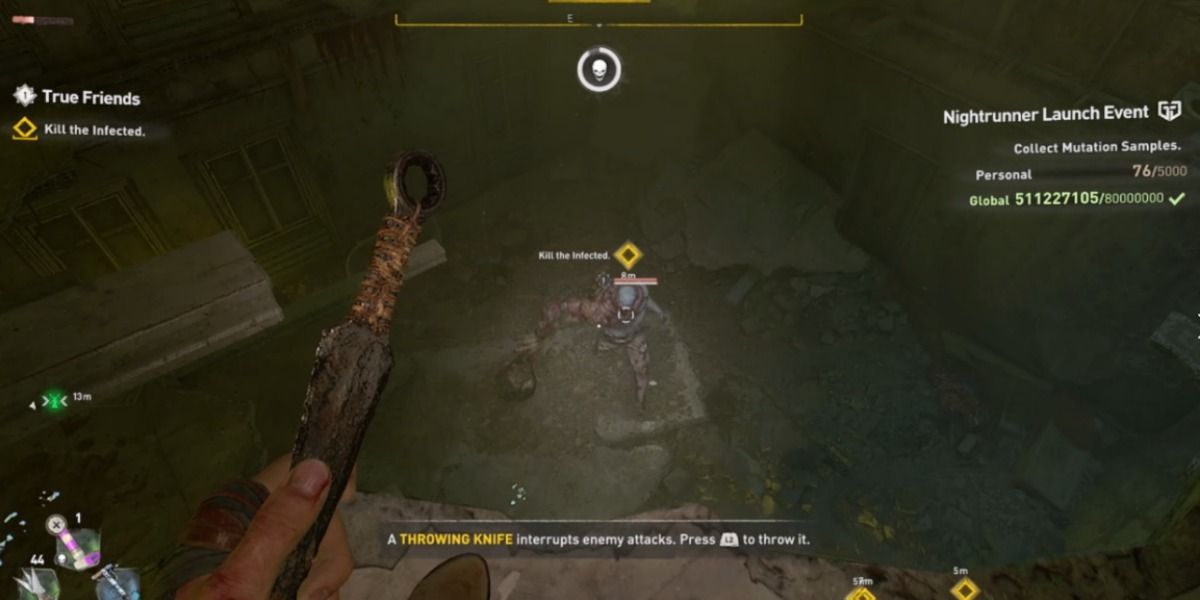 It turns out that what was going after the kids is a Goon, a massive infected that's slow but deals a lot of damage. You will also be fighting a Spitter, some Runners, and a couple of regular infected. Don't forget to search the corpses as mutated infected usually drop Infected Trophies as loot.

After killing all the zombies, go up again and talk to Moe. Is in this conversation when you will make your first big decision; you can either call out the kid and tell him, "You're lying," or understand his situation and tell him, "Whatever happened, I won't judge you."

Either way, you will learn the whole truth, the kids were hunting Domenik's dog to kill him and give the meat to his mother as a birthday present, but things went south when the dog entered the Dark Zone in an attempt to run away from the kids. The brothers went inside, the dog saved them from the infected, and that's how it got injured.

After hearing what happened, you will have to choose between "Leave the dog be" or "Put the dog out of its misery."

Whatever you choose doesn't matter, as the dog's fate is sealed either way. After dealing with the animal, go back to the Baazar and talk with Nerys again.

Which Choice Should You Make At The Baazar? 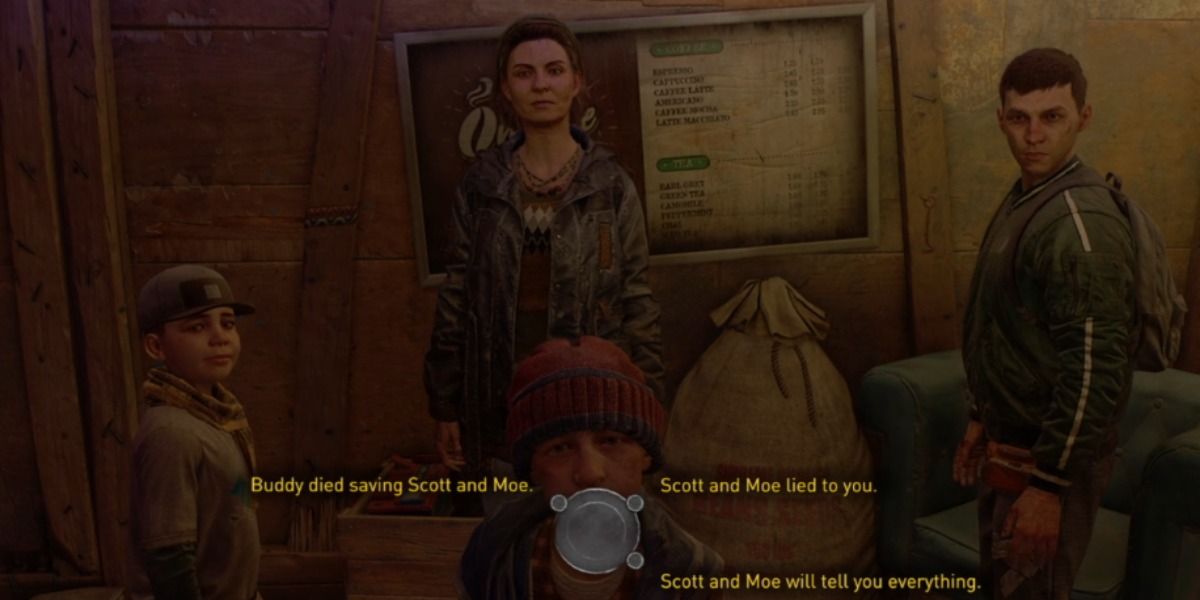 Follow the yellow marked back to the Baazar and talk to Nerys. She will be near the spot where you first talked to her.

Enter the room where Nerys is. Inside, you will find the two kids, their mom and Domenik, unaware of what happened and trying to convince Moe and Scott to help him find his dog.

Once Aiden enters the room, you can decide how the situation plays out.

The final choice won't affect anything beyond who you end up upsetting, so choose whatever feels best for you. Either way, here are the different outcomes:

Either way, once the conversation is over, you will get the following rewards: