In most games, a place called the Deathtouched Catacombs may sound pretty intimidating. But for Elden Ring, it sounds relatively pleasant in relation to the other nightmare zones scattered across The Lands Between.

Still, there's a decent amount of danger present in this dungeon, and we're going to help you navigate it, so you can find yourself a sweet sword and talisman. Let's take a deep dive into the skeleton-infested hellhole that is the Deathtouched Catacombs. 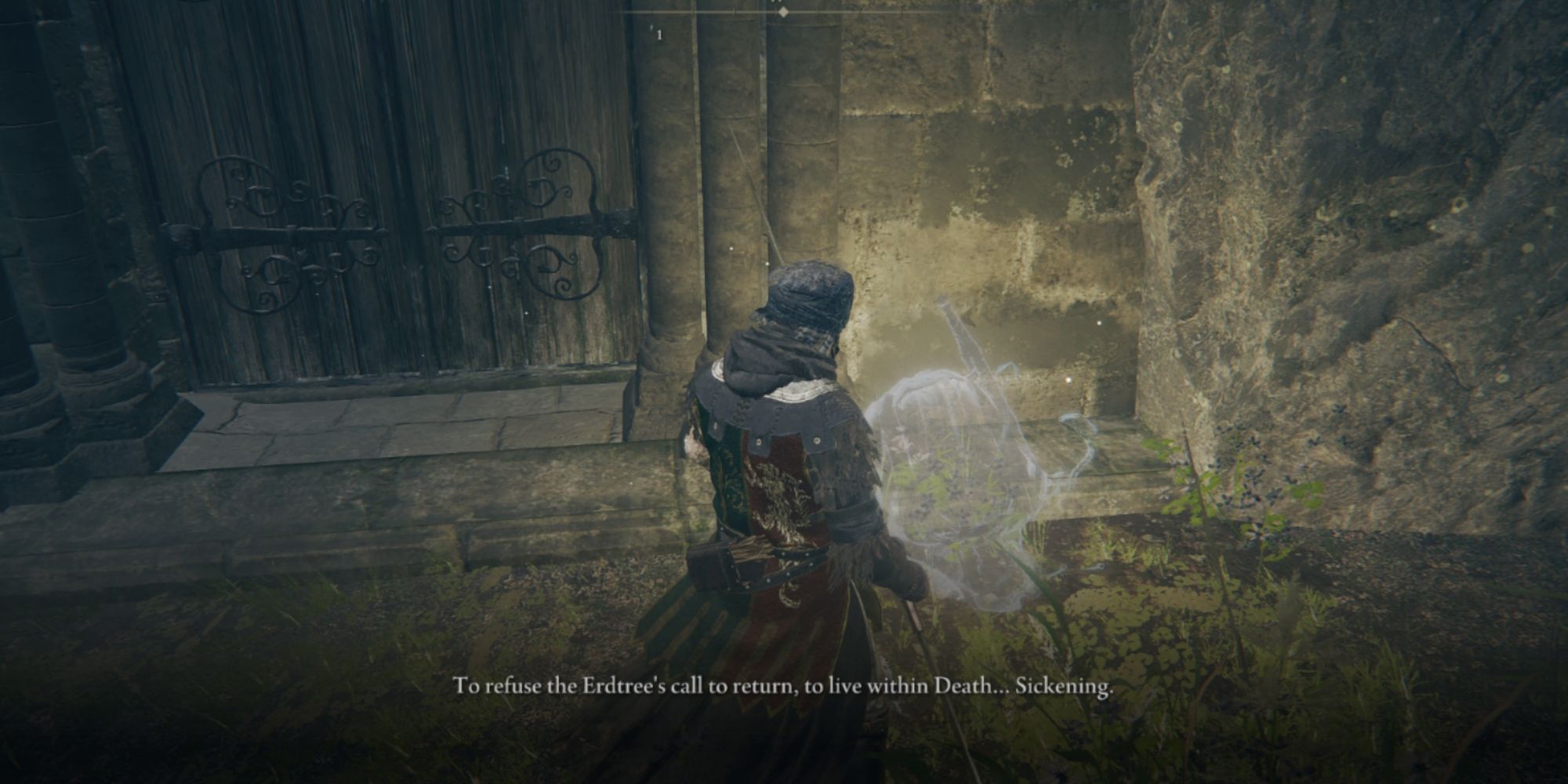 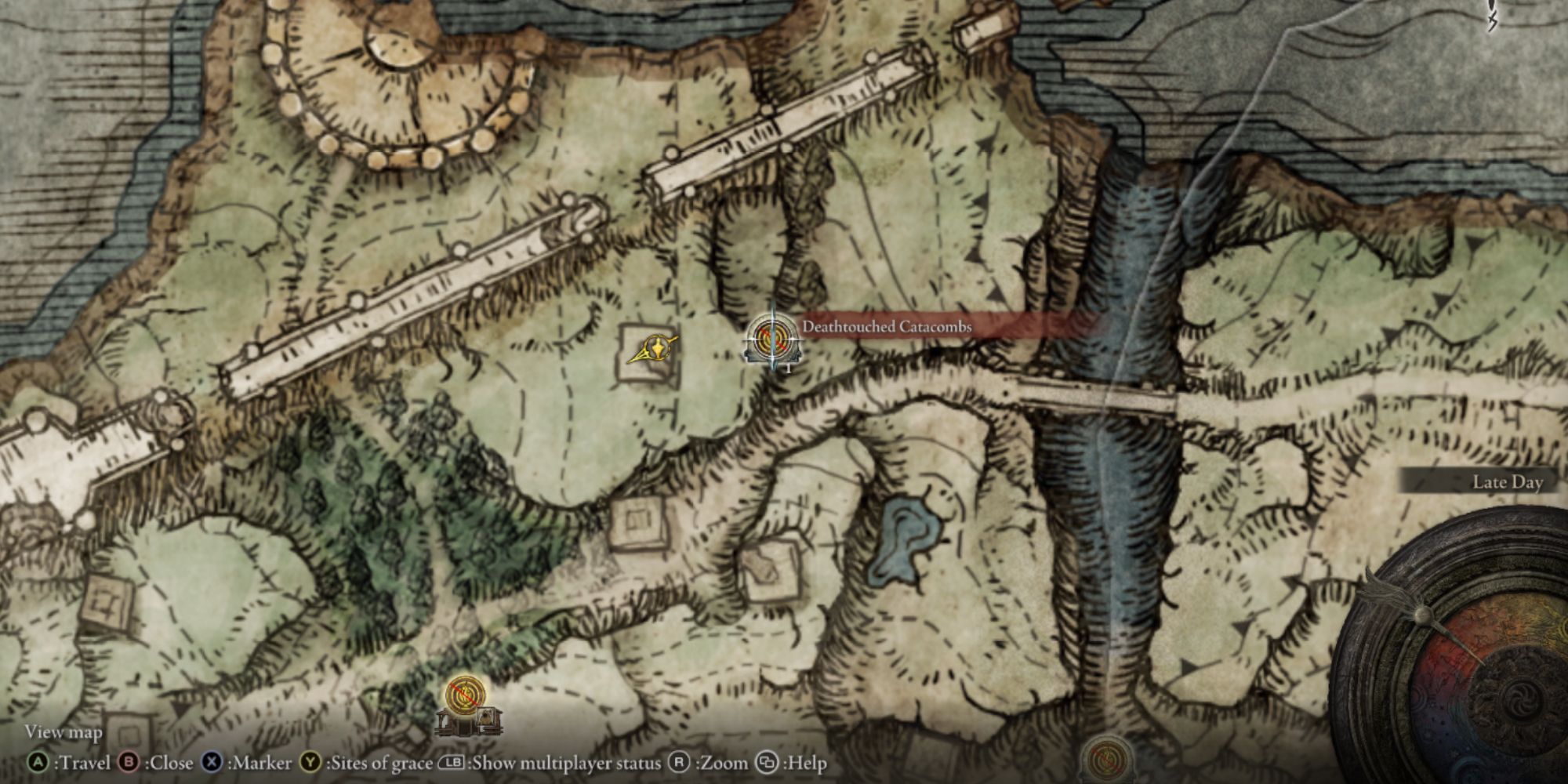 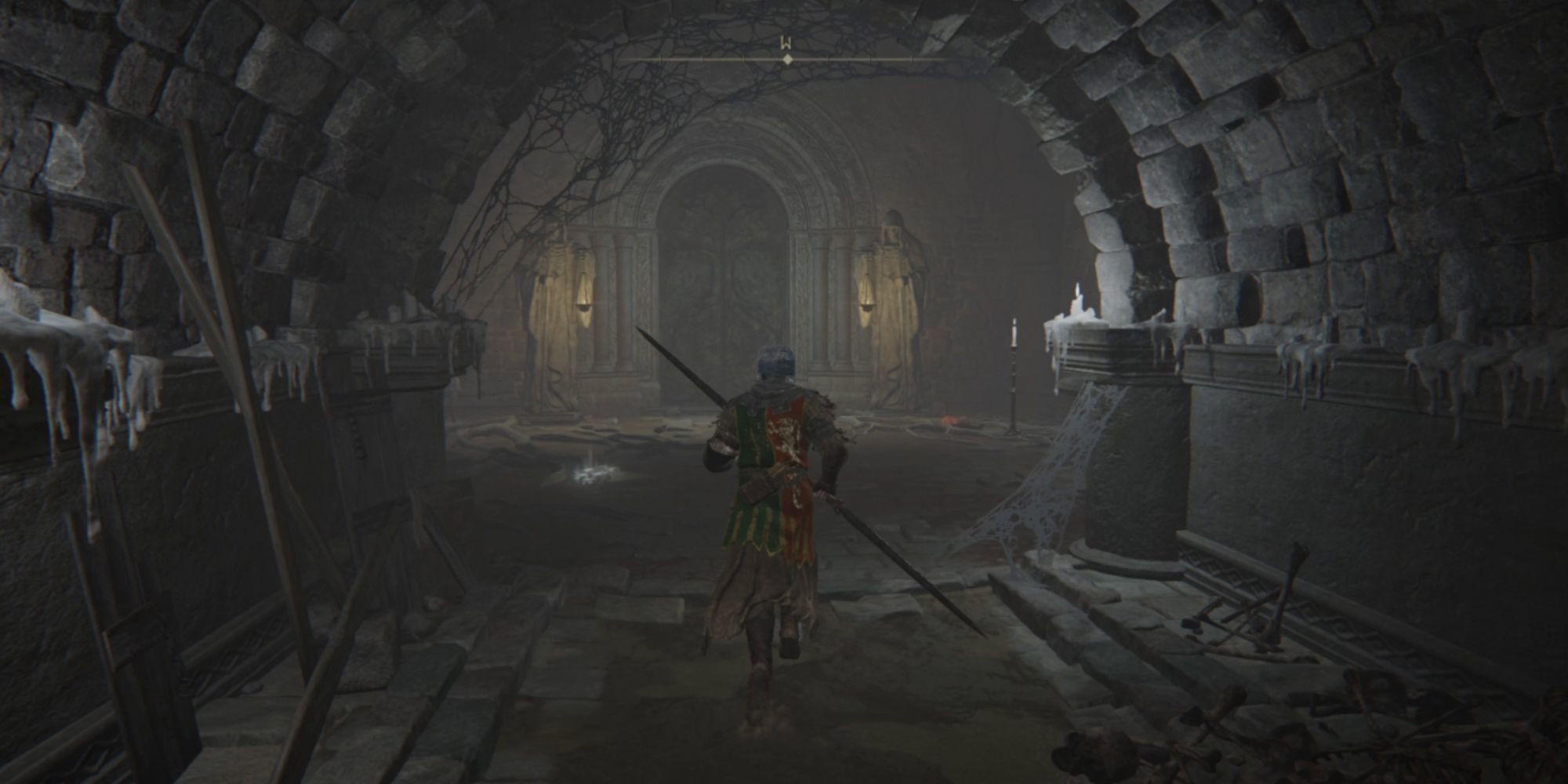 As you can tell by this dungeon's name, it's yet another catacomb full of undead things that want to slice you up. It's not an especially difficult area, although it is quite possible to miss it since it's tucked away in the northern part of West Limgrave. Just head northeast of the Warmaster's Shack site of grace, and you should find it on past a small encampment of enemy soldiers and dogs.

When you do find it, you should see a door along with a ghostly NPC sitting next to it. They'll lament about someone refusing the Erdtree's call and living in death or something like that. Go through the door and touch the site of grace to activate it. Now it's time to explore this crypt.

The main enemies that you'll have to deal with here are skeletons. Some of them will have swords, while others will have bows and fire arrows at you. Once you deplete their health bar and knock them down, skeletons will begin to get back up again. A part of them will be glowing on the ground, and you need to smash that to prevent them from regenerating. 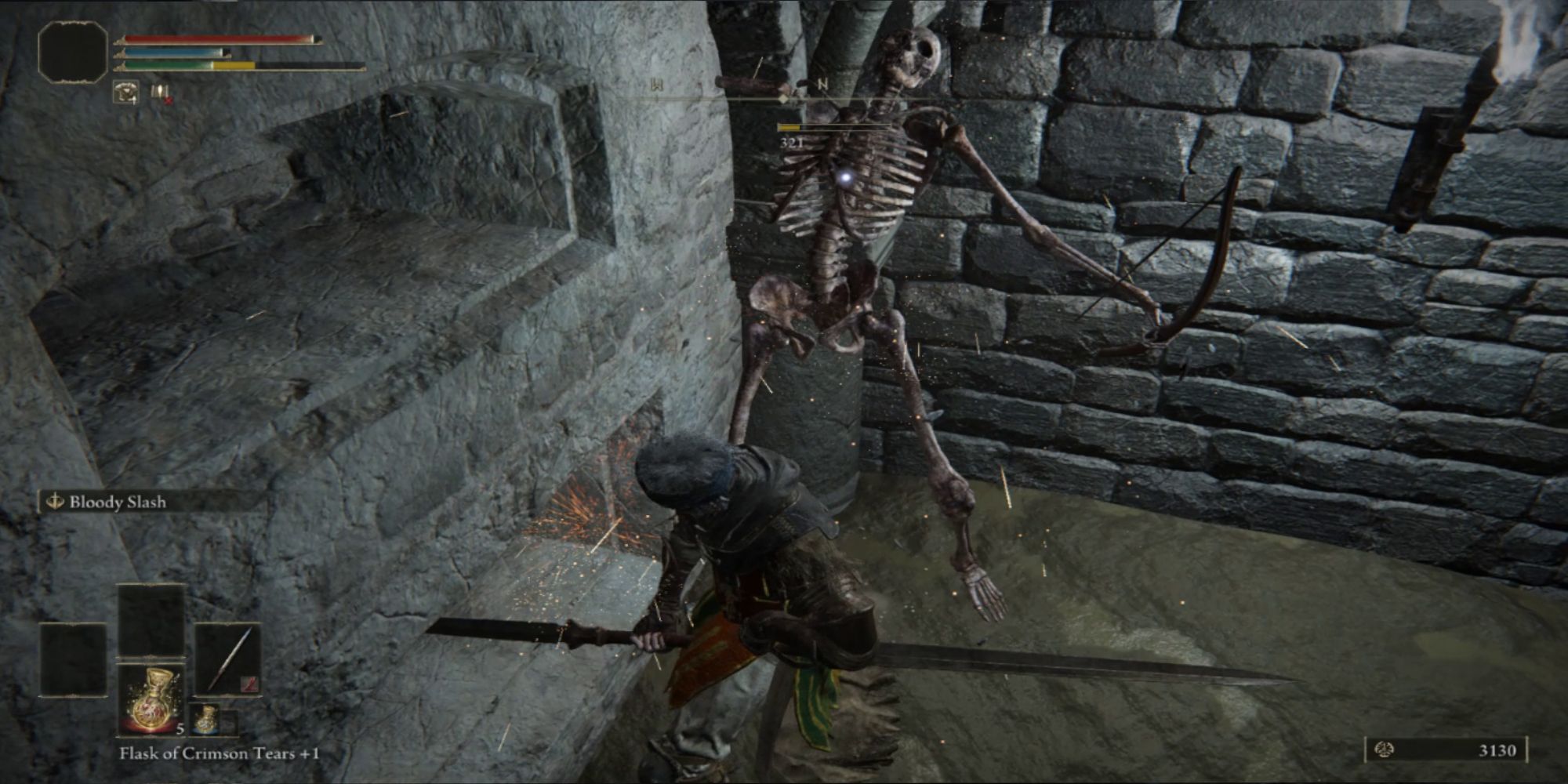 As you head down the stairs from the site of grace, you'll find a large locked door that you'll need to open. To the right of that door should be some Root Resin, and to the left will some stairs going down.

As you go down those stairs, you'll meet the first of many skeletons who will reassemble themselves and attack you.

There will be another skeleton to your right as you reach the bottom of these stairs. Beat them up, continue downwards, and you'll see some Grave Glovewort. More skeletons will also appear, so deal with them. Now you'll have two ways you can go. You can either go to the right and through a narrow hallway or to the left and down some stairs.

If you go to the right, you'll encounter two more skeletons, one of which will shoot arrows at you. You'll find another Grave Glovewort under the stairs. Head through the hallway, and you'll enter a room where you'll see another Grave Glovewort and a Grave Violet at the end. Unsurprisingly, you'll be attacked by two more skeletons when you go to grab them. Destroy them, and then continue through the entrance to your left.

As you come out of the entrance, you'll notice that you're on a raised platform. You'll see a body with an item on it, which will be a rather nice sword called the Uchigatana, which will be a familiar weapon if you've played any of FromSoftware's other games. When you pick it up, a skeleton with a bow will pop up, so beat them up. At the other end of this platform will be another sprig of Grave Glovewort. Once you've grabbed these two items, drop down from the platform, and you'll now have a room full of skeletons to deal with.

It's very easy to get overwhelmed by the large group of skeletons, so try not to use up all of your stamina. If you have AOE spells or incantions, they may be useful here. Don't forget to pick up another Grave Glovewort that's in this zone.

Once the room full of skeletons is clear, head to the western end of this crypt and pull the lever to open the heavy door. There will be a body with some Bloodrose on it and another Grave Violet you can gather. As you head back, you'll notice that a whole gang of skeletons has appeared out of nowhere. Either kill them or run past them to the eastern entrance and go up the stairs to head back to where you entered these catacombs. The door from before will now be open, and you can fight the boss. Rest at the site of grace if you need to refill your flasks and prepare yourself for an underwhelming boss fight. 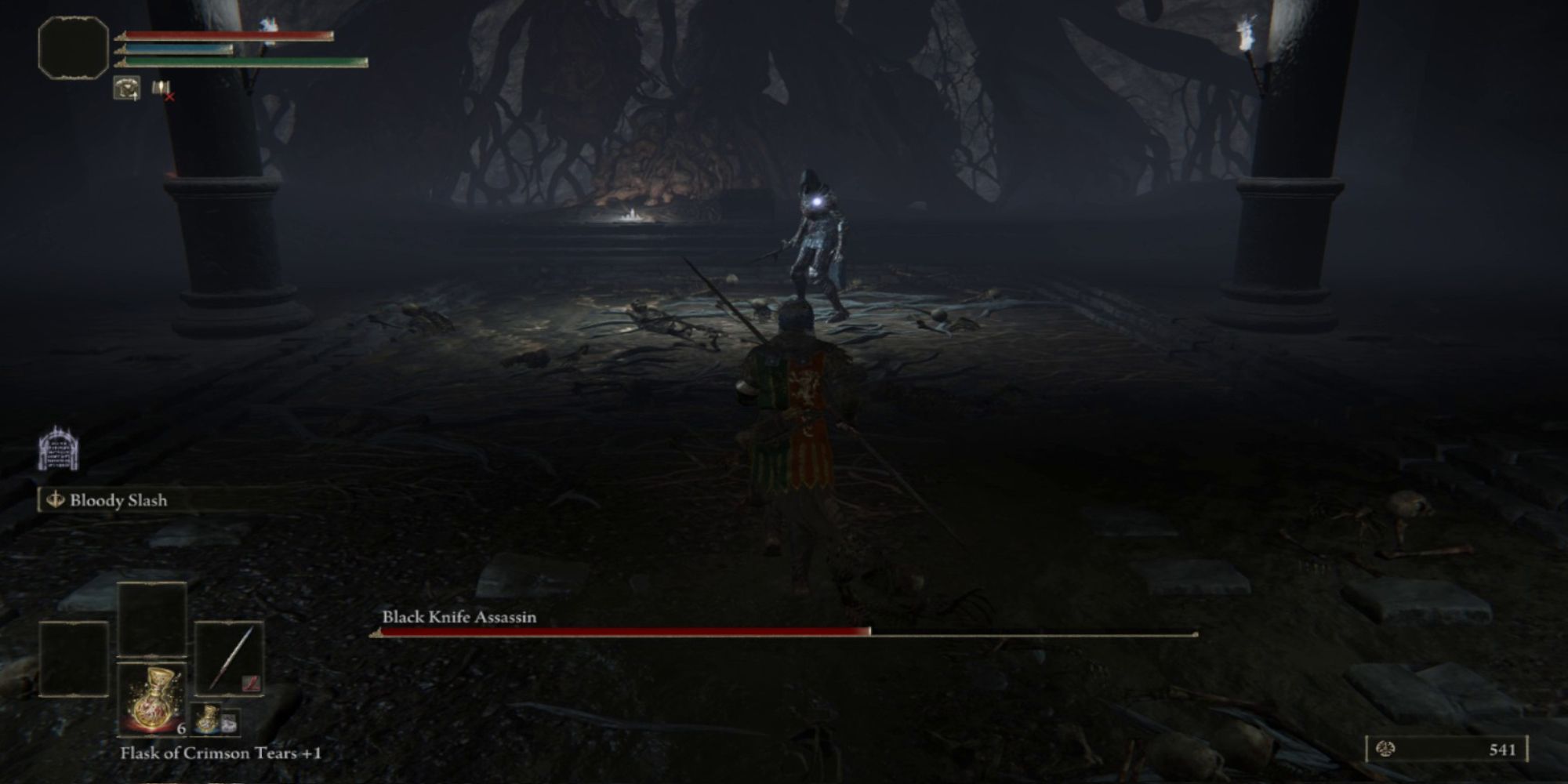 Walk through the yellow fog gate, and you'll now have to battle the Black Knife Assassin. This particular boss shows up a few times throughout Elden Ring, although this is likely the easiest iteration of it.

For some strange reason, this boss will be missing a large chunk of its health bar when this fight begins. They'll move quickly and try to hit you with some fast stabs and slashes with their dagger. The best way to take care of this boss is to immediately overwhelm it with damage. It doesn't have great poise, so you can stagger it if you whack them enough. Try summoning some spirits such as the Lone Wolf Ashes as that should give you the help you need to take it down. If you have ranged attacks, you can easily keep your distance from the Black Knife Assassin and defeat it without losing any health.

Once it's dead, you'll receive 1600 runes and the Assassin's Crimson Dagger talisman, which restores a portion of your health when you perform a critical hit on an enemy. There will be a chest at the end of this room that will contain some Deathroot, which can be traded to Gurranq, the Beast Clergyman, who can be found at the Bestial Sanctum in Caelid. There's nothing else here, so warp back to the entrance, and you're done with the Deathtouched Catacombs.