Godskin Apostle is a recurring boss in Elden Ring. Unlike many bosses, both variants you have to face are challenging and can be frustrating, especially in the game's early stages. As the bosses are optional, you come back later in the game if you are having a hard time around them. The boss drops a few notable things that one might find appealing if they try to cosplay the boss.

Fighting him early on multiple times can train you for the duo encounter you will have with him in the last areas of the game. Here is all you need to know about Godskin Apostle. 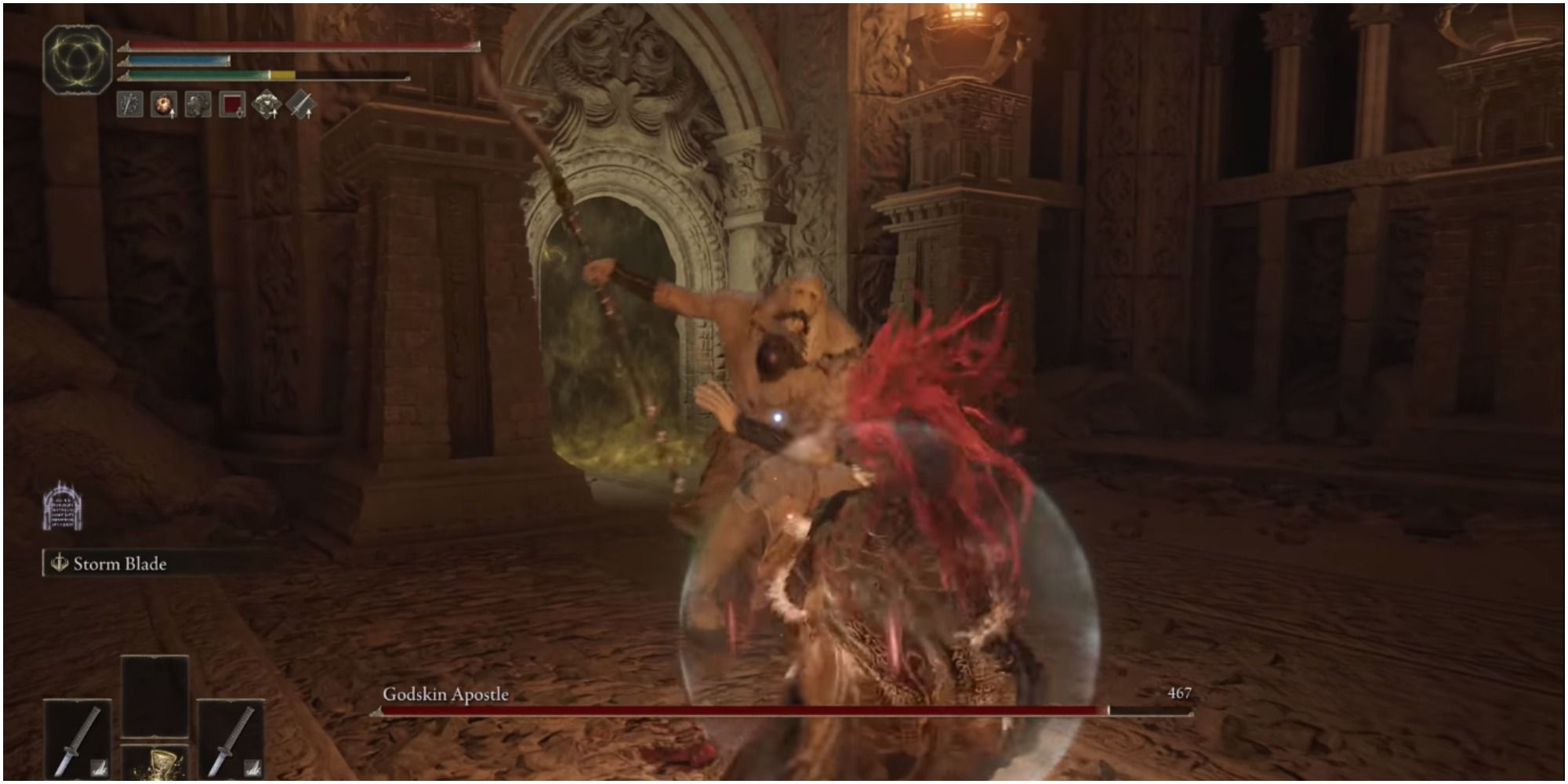 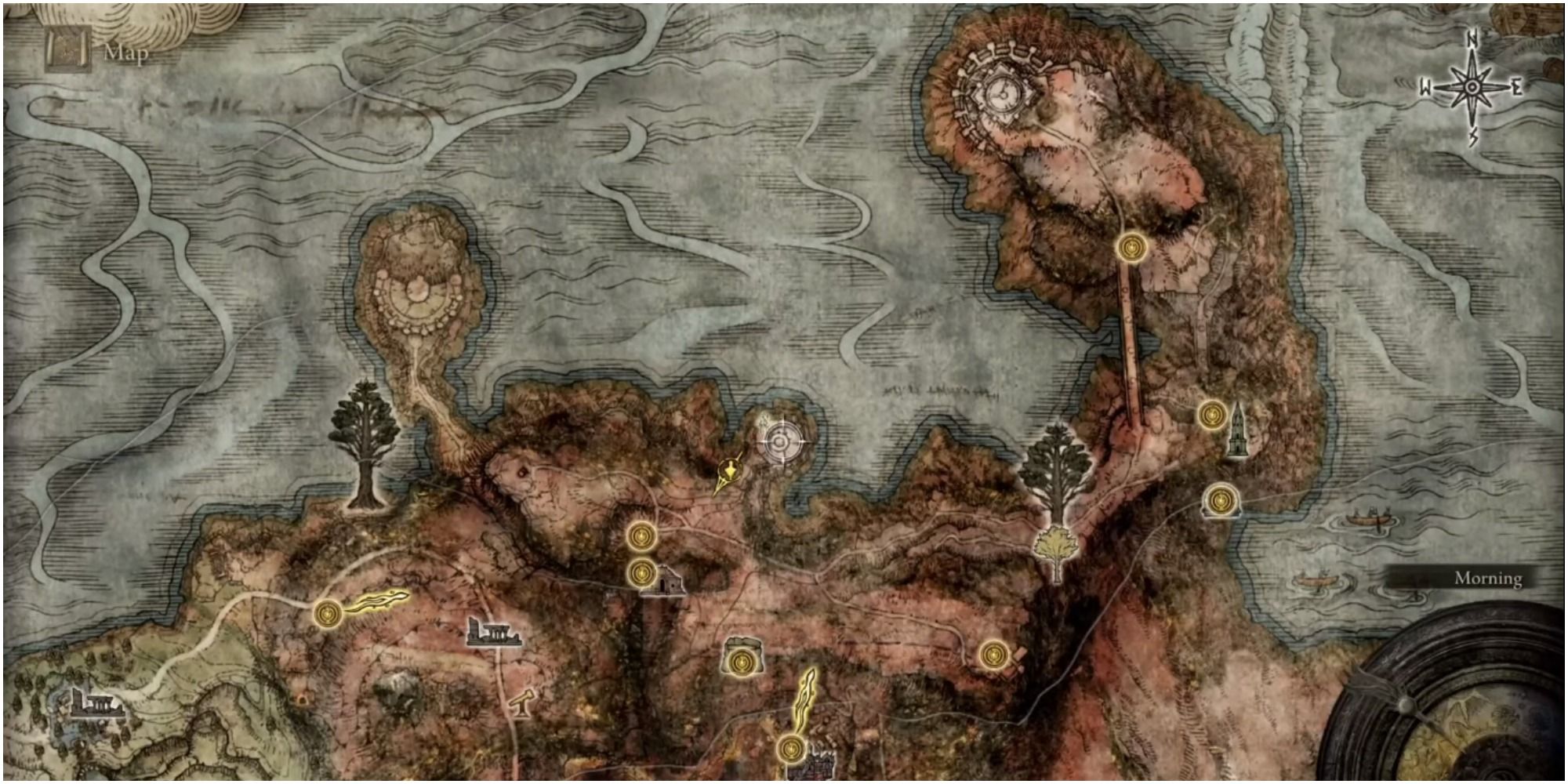 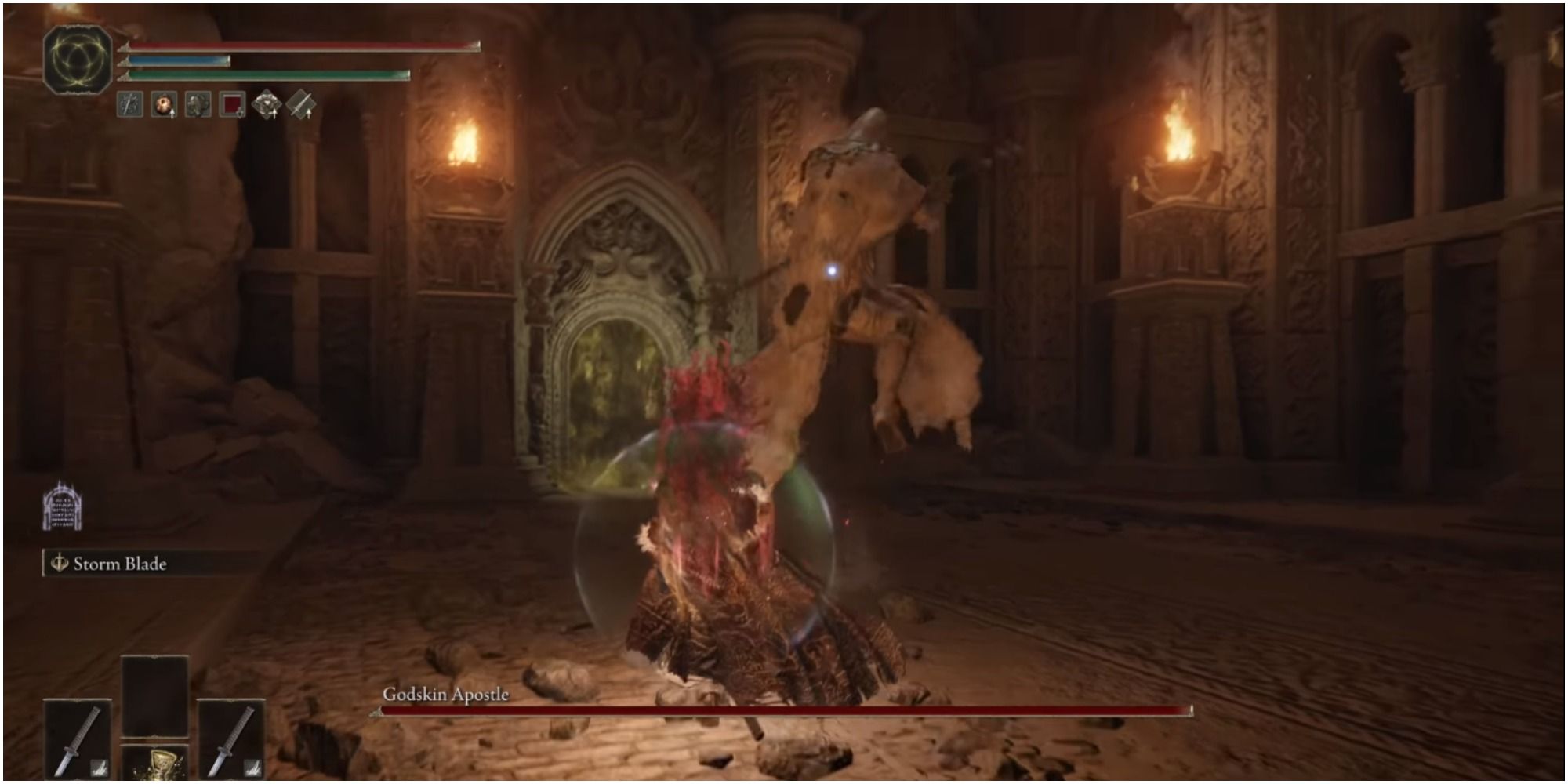 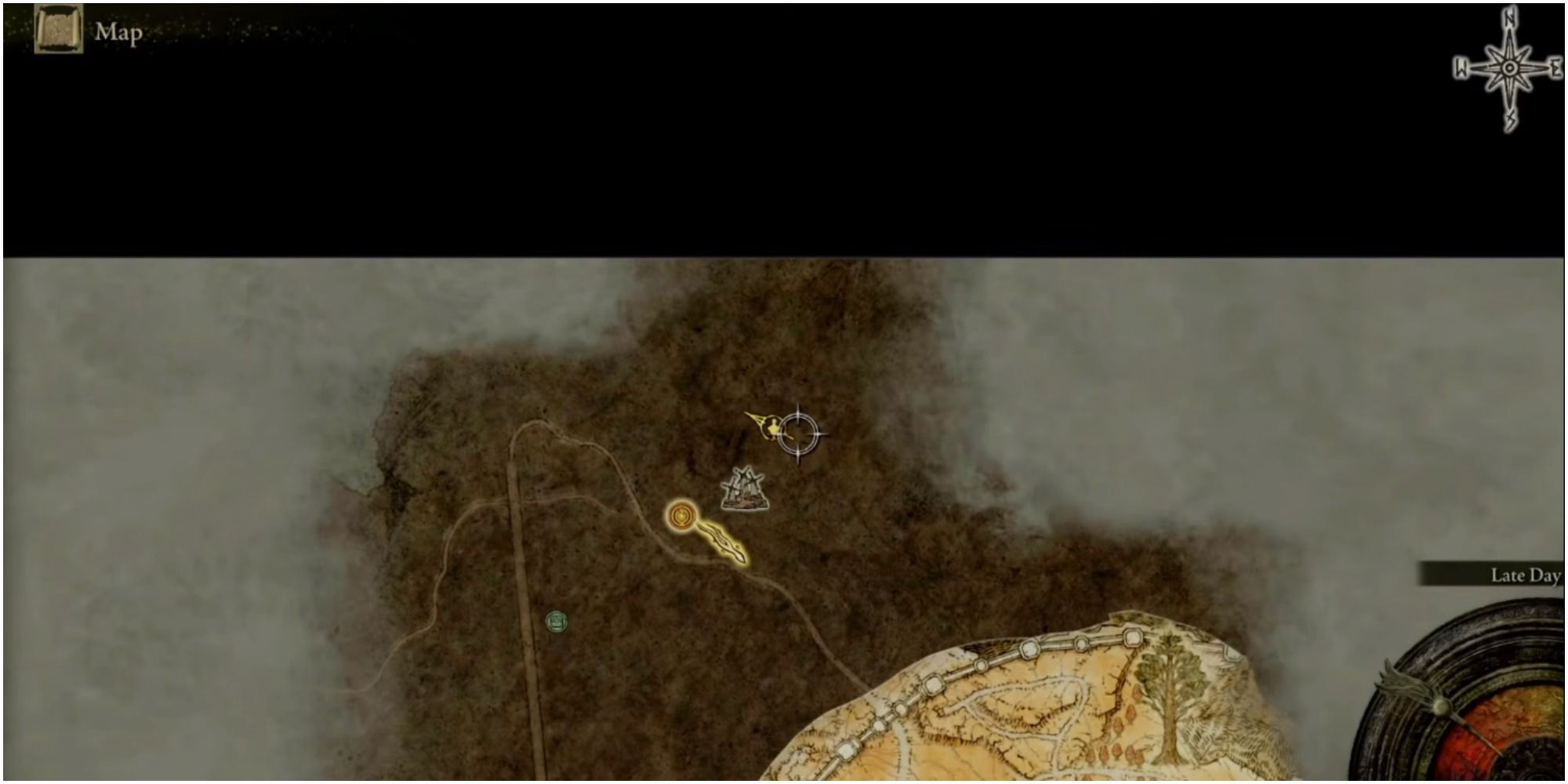 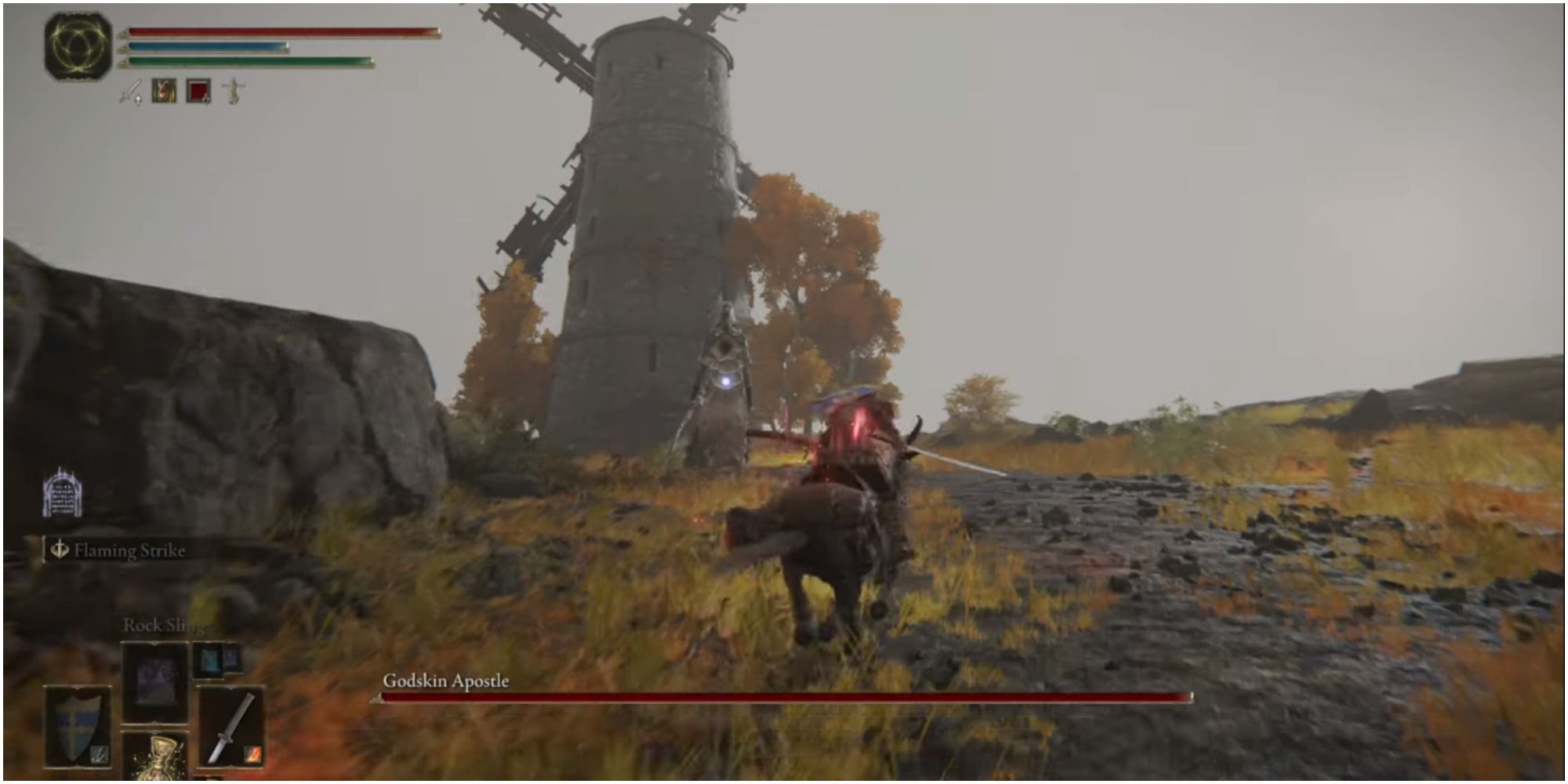 Godskin Duo is a boss located in Windmill Village, Altus Plateau, and Divine Tower of Caelid. Both encounters with the boss are optional and will not affect any ending whatsoever. You can summon Spirit Ashes and online players to aid you in both fights. Both variants are weak toward Hemorrhage. This allows you to bring weapons with high bleed build-up and take out the boss's health bar relatively quicker. As far as the physical attacks are concerned, the boss will take serious damage from thrusting/piercing weapons.

The boss is strong against Physical Strike attacks, so if you are using hammers or clubs, switch them out before going into the fight.

Defeating both variants will get you Godskin Apostle's full garb, an Incantation, and his weapon. 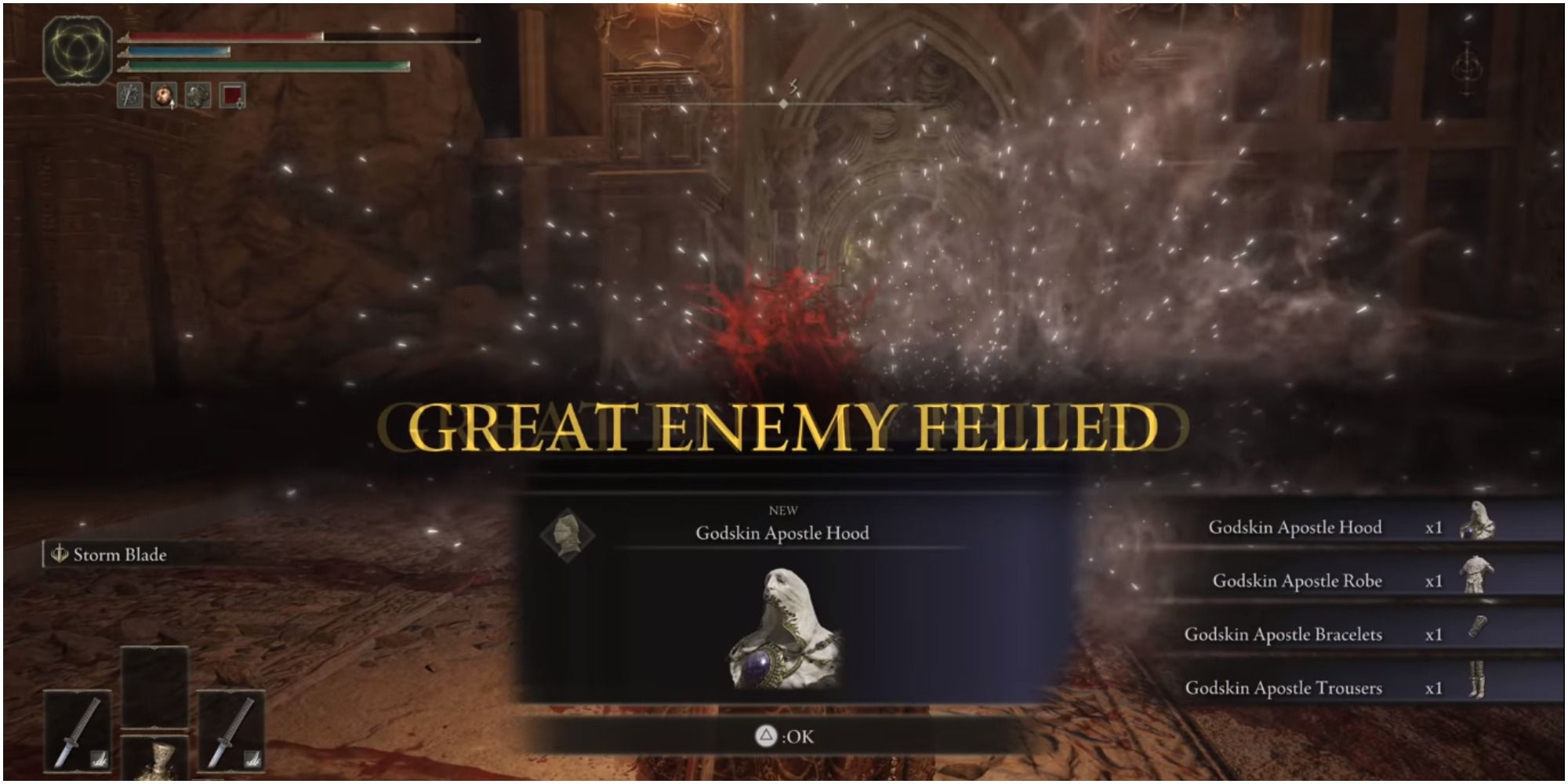 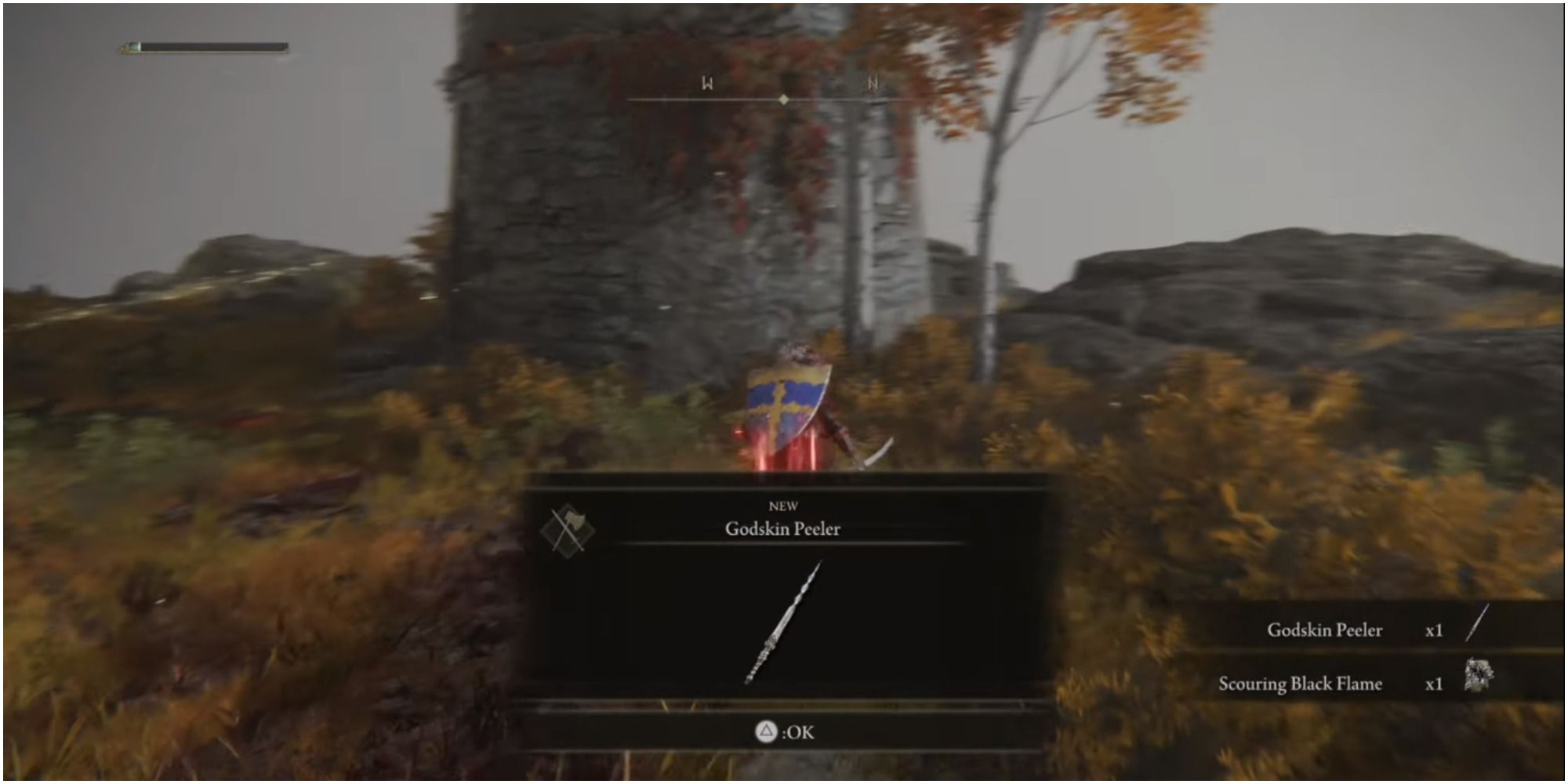 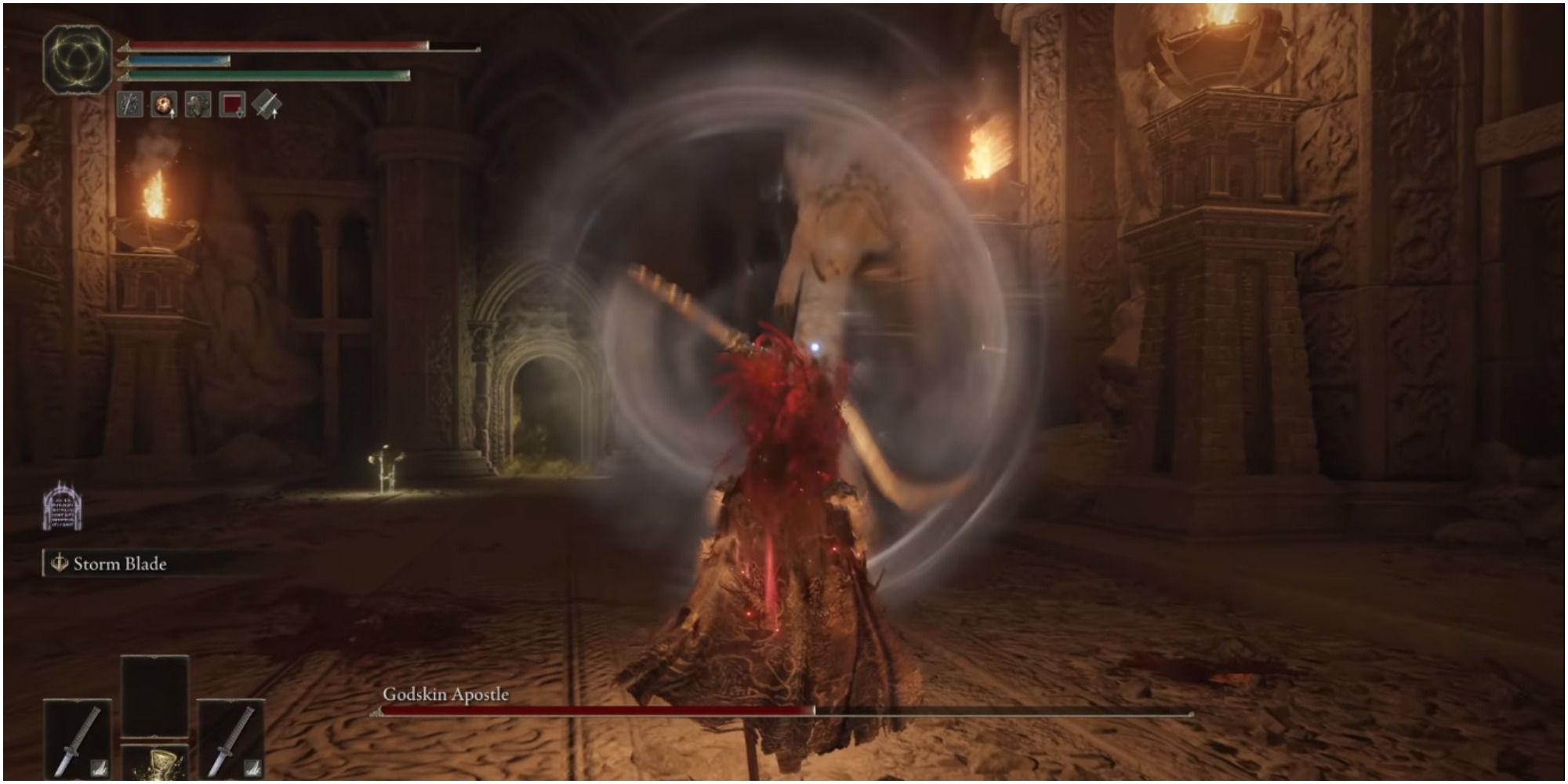 The boss has two phases and a variety of attacks that keep that player on their toes. Most attacks are slow telegraphed and can be avoided easily. The attacks to look out for are the ones that are attacks mixed in with Black Flames. These deal a lot of damage over time to the player. 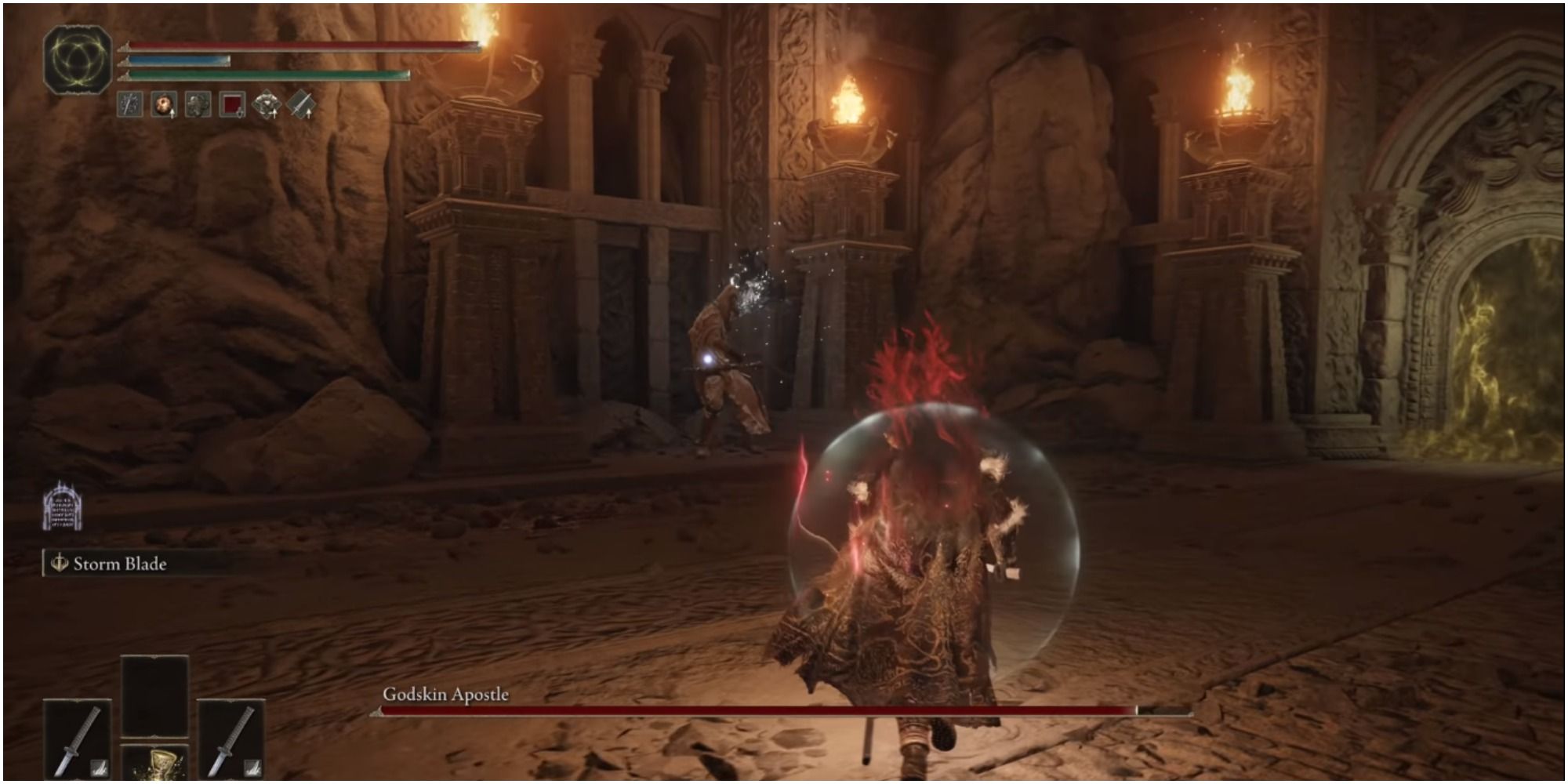 The boss raises his left hand and conjures a black flame. After a second, he throws the fireball at you to deal damage over time.

Counter: This attack can be easily avoided by rolling to either side as the boss throws the fireball. He only uses this attack if the player is mid to long-range away from the boss. 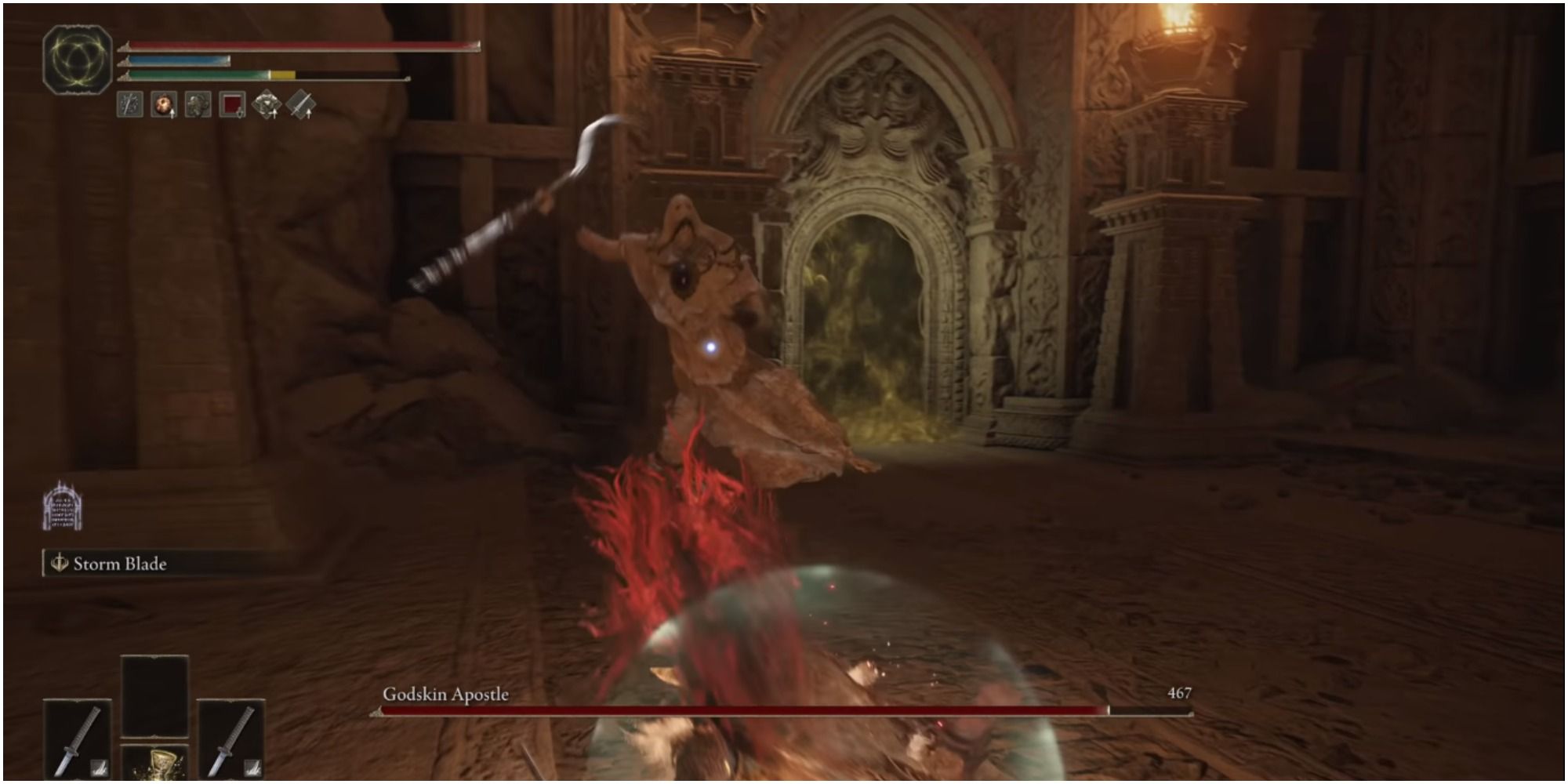 Godskin Apostle stabs the player with his Twinblade and then pulls the player back or follows up with a slash attack.

Counter: Both variants of these attacks can be avoided by rolling backward and dodging the stab. Once you dodge the stab, the follow-up is surely to miss. Staying mid-range from the boss decreases the boss's chances of performing this attack. 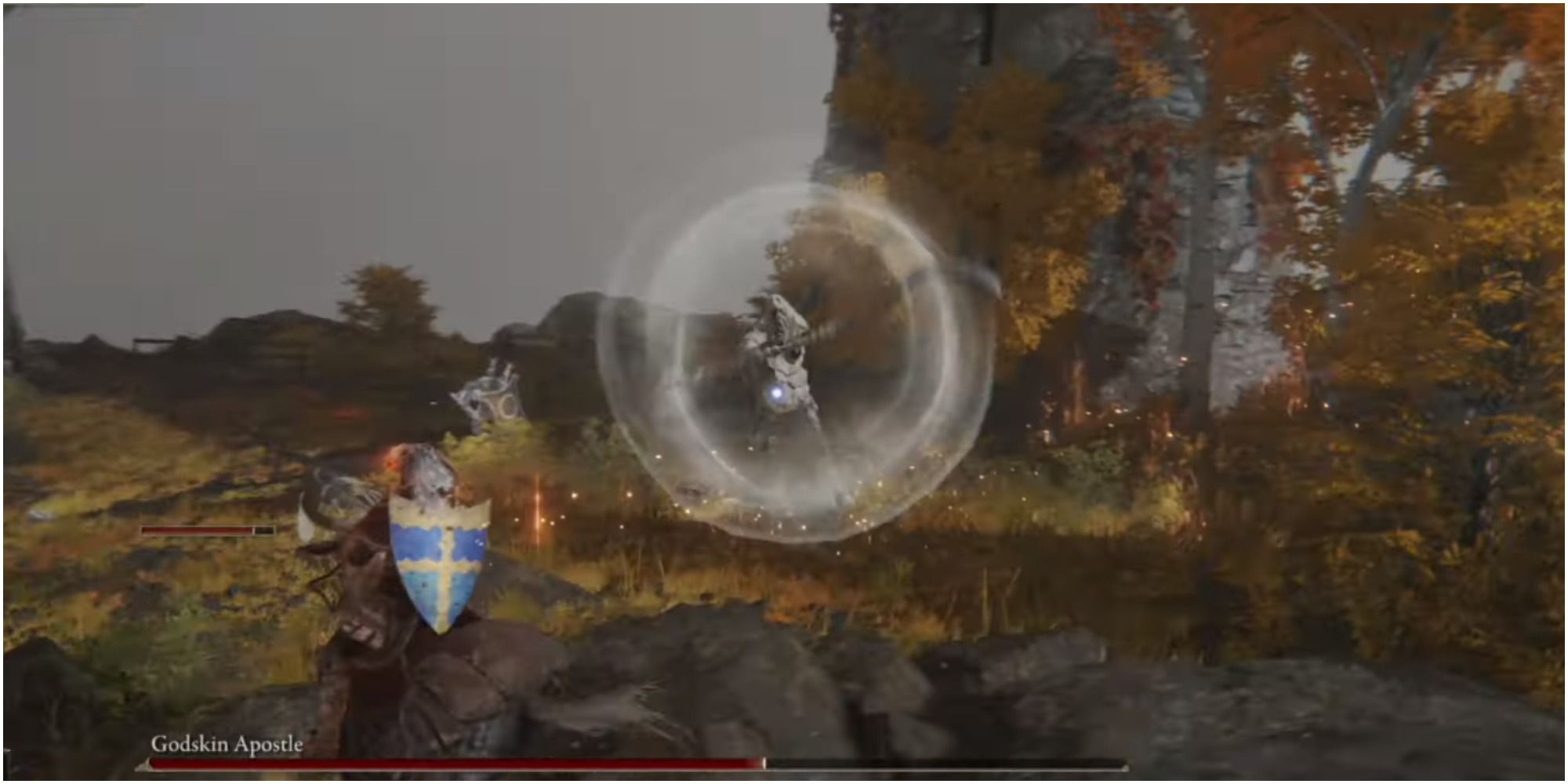 The boss twirls his Twinblade, making it spin endlessly, and moves forward slowly.

Counter: Avoiding this is crucial as getting hit quickly takes out a massive chunk of your health. If you are at mid-range, you can keep your distance until the attack finishes. If the boss starts to do this at close-range, then try to get behind and hug his back now so that he does not turn around. 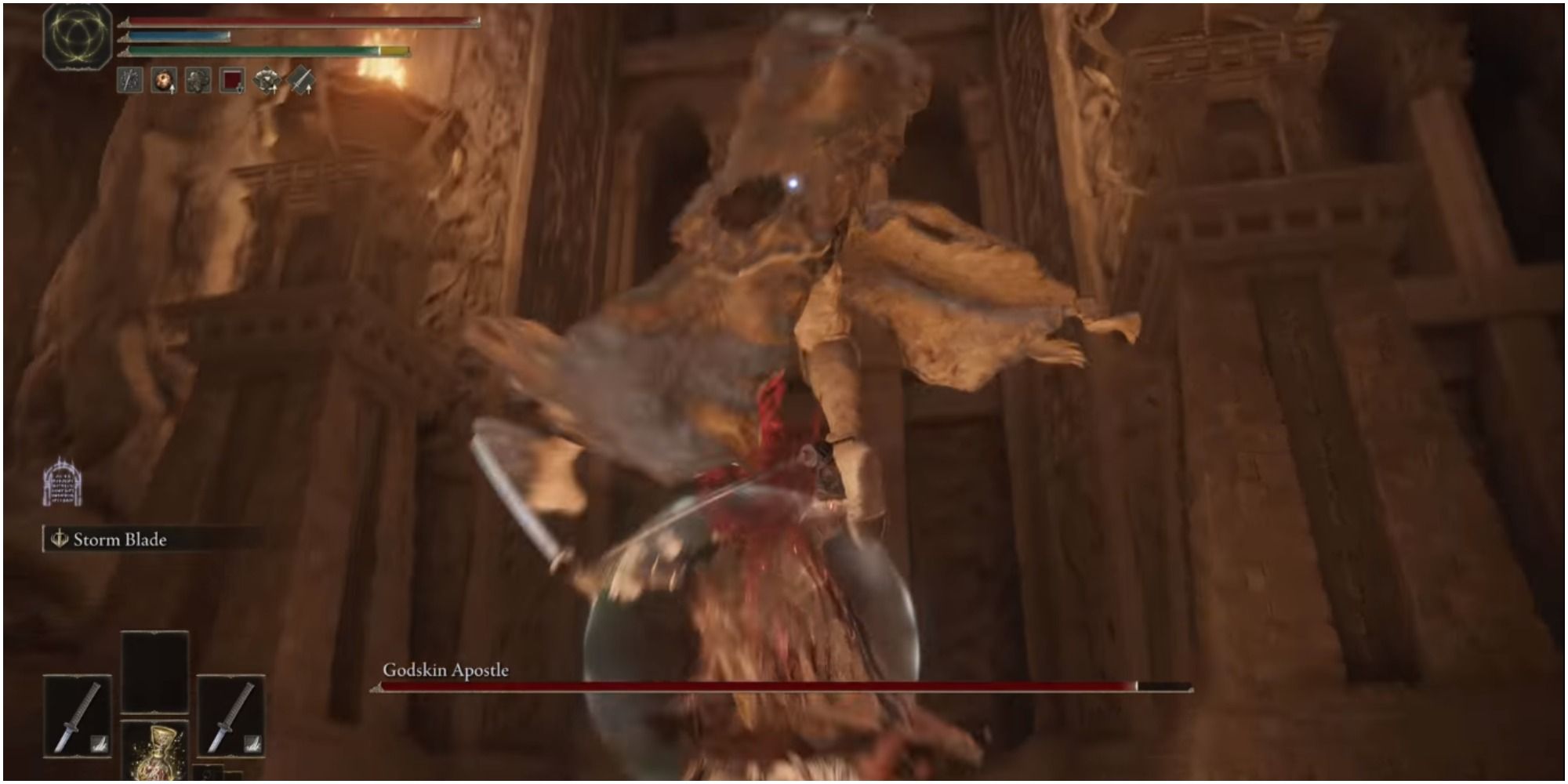 Godskin Apostle jumps up and slashes his weapon down on the player.

Counter: After the boss jumps and is about to come down, dodge to any side or forwards toward the boss. 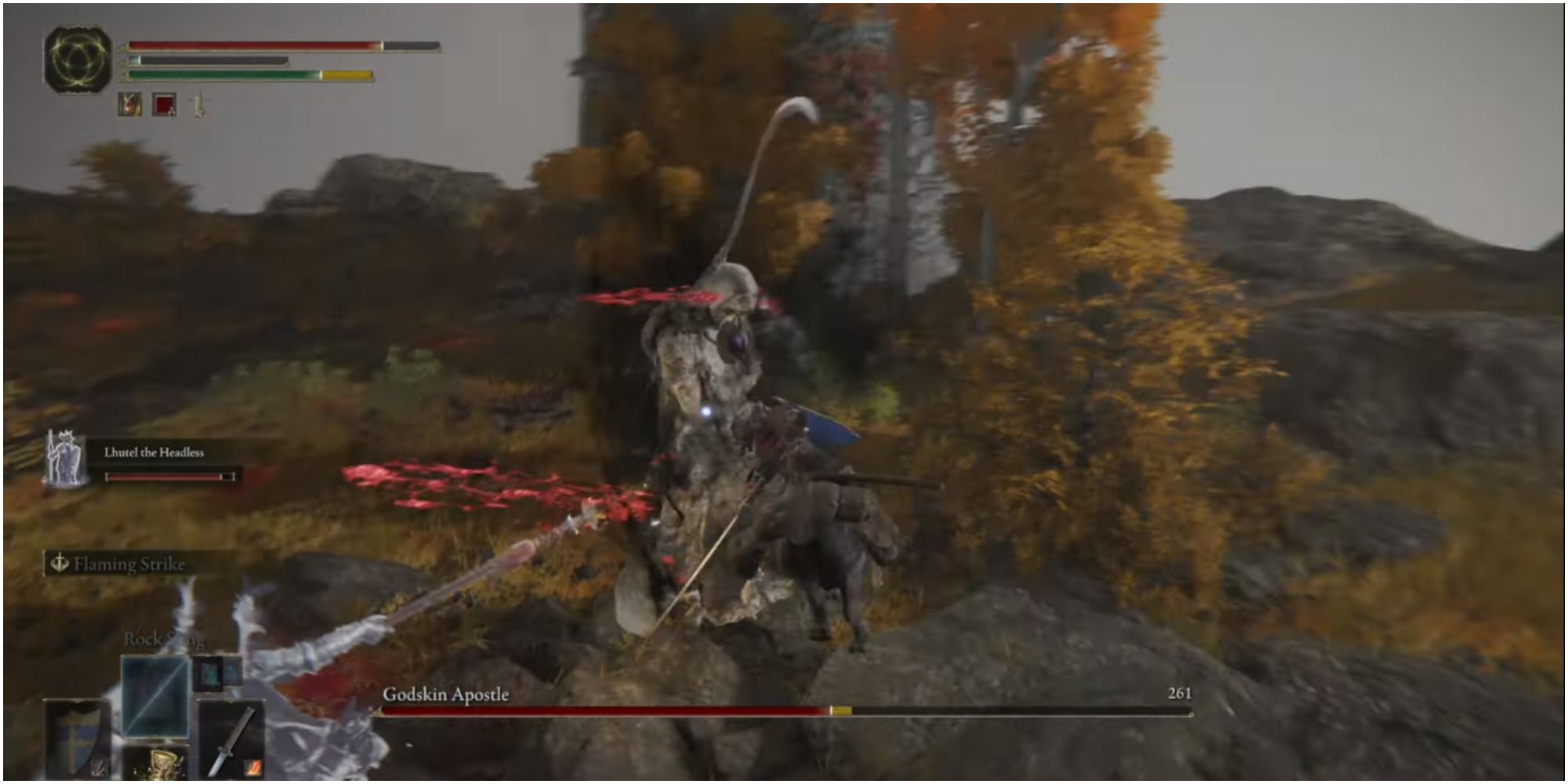 Around 60 percent health, the boss starts to float above the ground slowly and causes the black flame to circulate him. Then he emits a small shockwave around him to push back the player. He gains a few new attacks in the second phase.

Counter: Get a few hits in and run away before he does the shockwave.

The boss stretches his upper body outwards towards the player while making his Twinblade spin and deal damage. After this, he flings back to his lower body.

Counter: Dodging through the weapon will allow you to avoid any damage and attack his lower torse until he retracts. 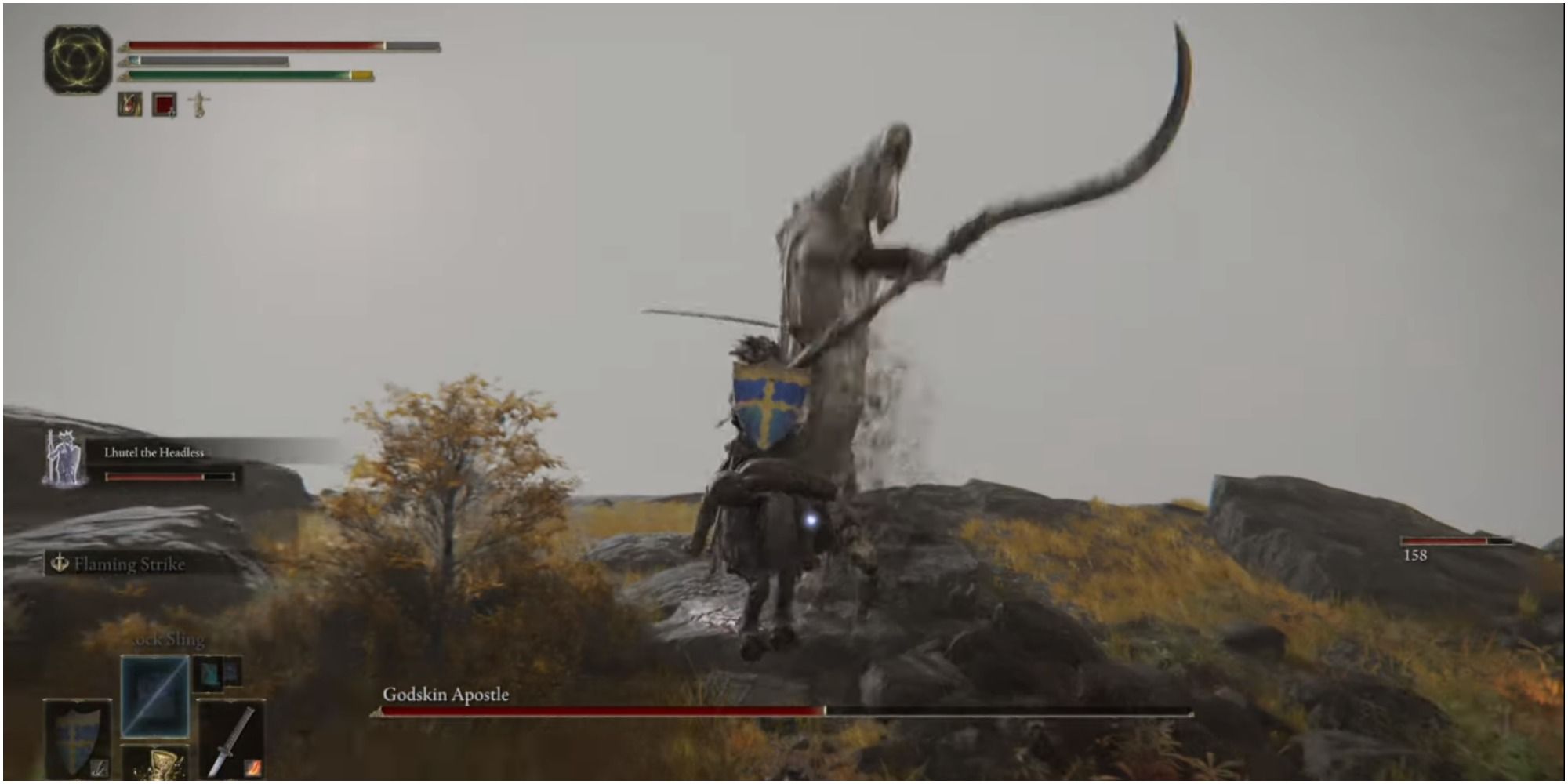 Godskin Apostle stretches leaps ahead to strike the player with his weapon. He then moves his whole body to wherever his attack lands and follows up with a sweep attack.

Counter: This attack has an easy tell and slow animation, allowing you to side dodge the plunge easily. You can roll away from the sweep or dodge through it. 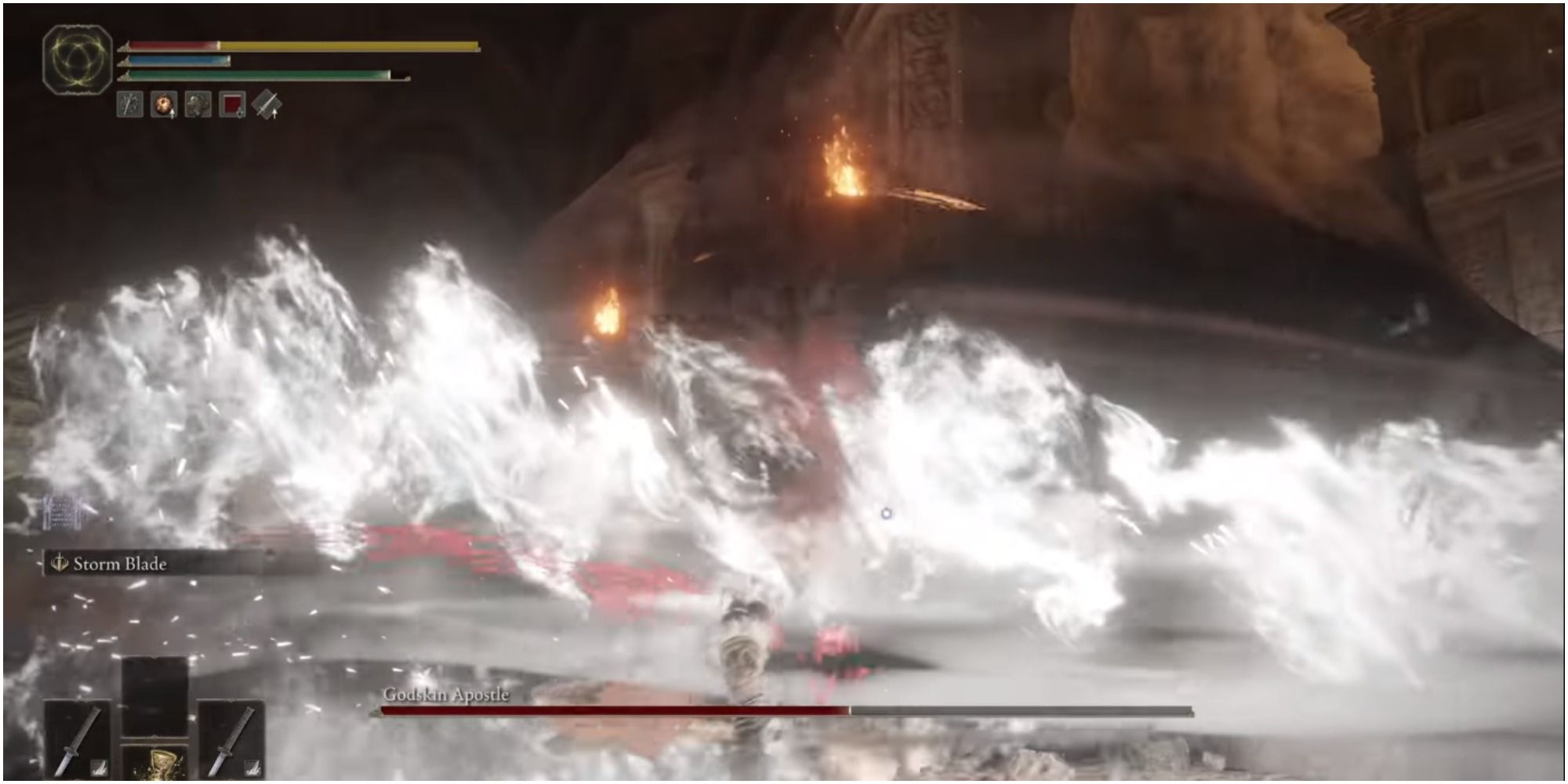 The boss engulfs his weapon in black flames and extends his upper body to make a circle around him by striking the ground. Black flame stays in the area for a while before fading away.

Counter: Whenever you see the boss stretching out and having his blade covered with a black flame, roll out of the area to avoid getting caught in the circle. 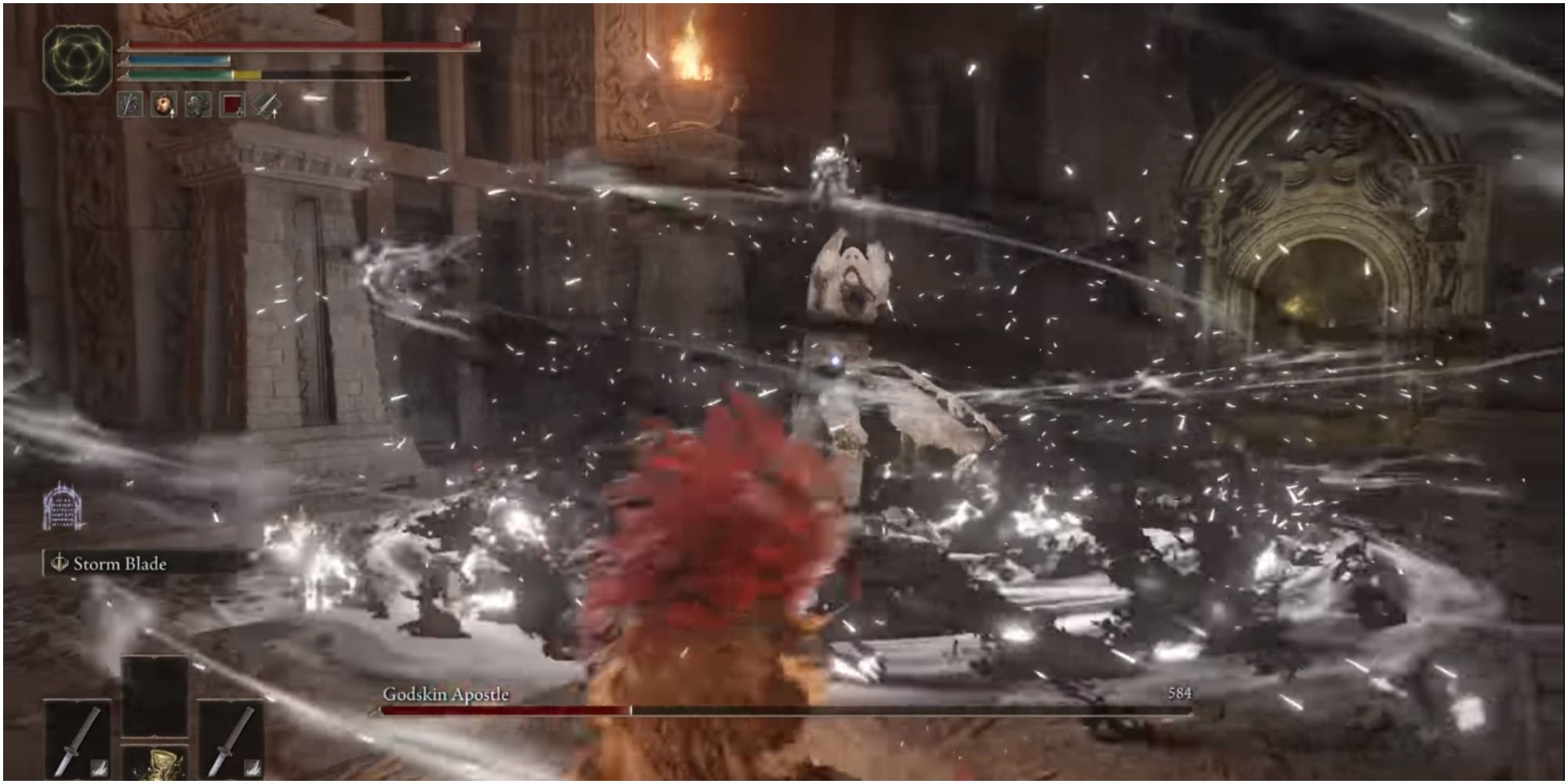 Godskin Apostle's weapon covers in black flame, and he twists it above him, causing a whirlwind of black flame around him. He then strikes his blade on the ground causing an explosion to occur.

Counter: Staying inside the whirlwind can be troublesome, so get out of the area as the boss starts to twirl his weapon. Do not stay near the whirlwind as the follow-up blade strike and explosion can hit you.Return to Quick Links 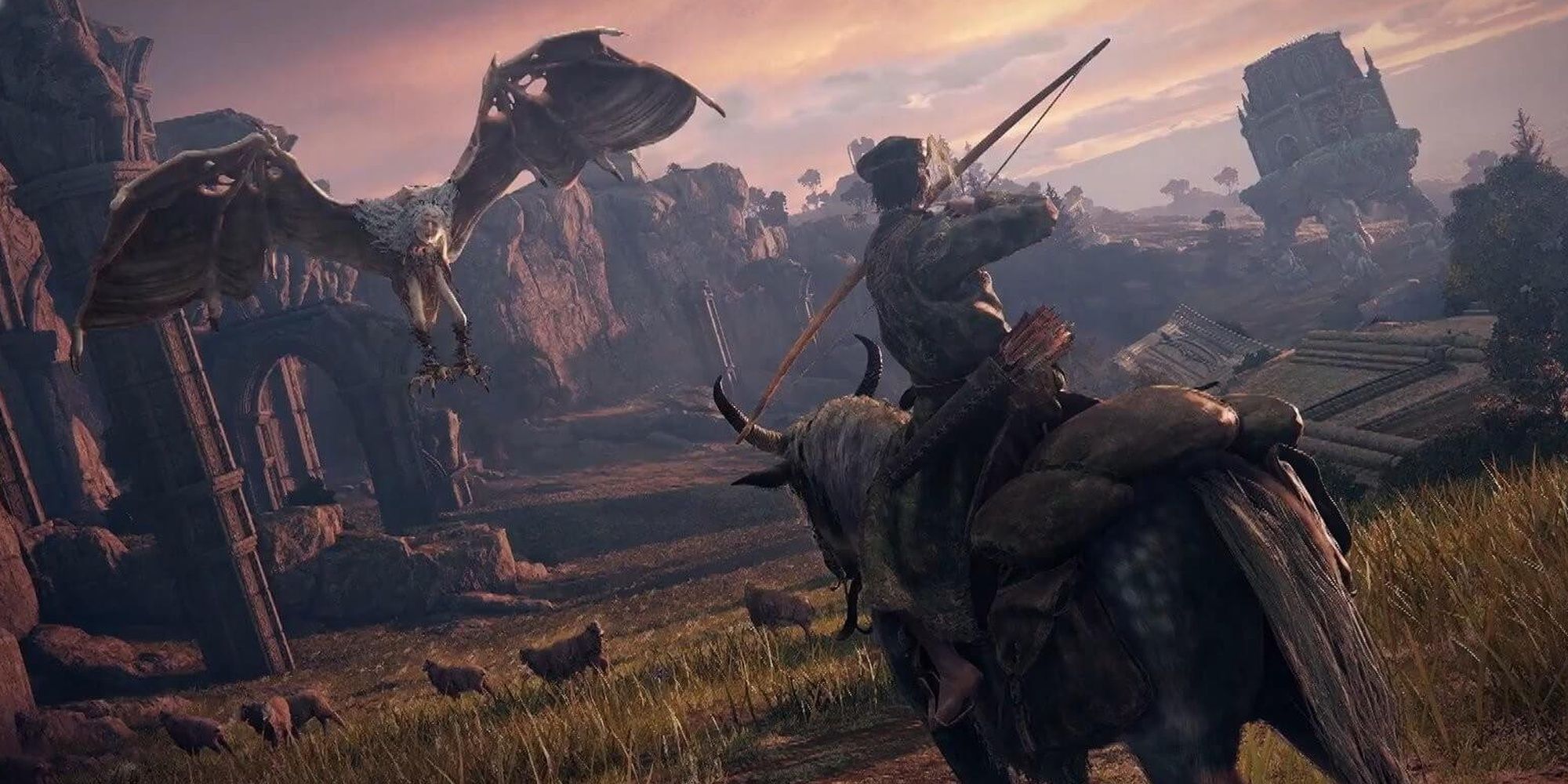 You can fight the Windmill Village variant on Torrent, but that is risky as avoiding his attacks can be difficult on horseback. In addition to this, if you take more than a few hits, you will fall from the horse allowing the boss to have ample time to attack you and kill you while you get up. Aside from this, there are two main strategies for this fight: 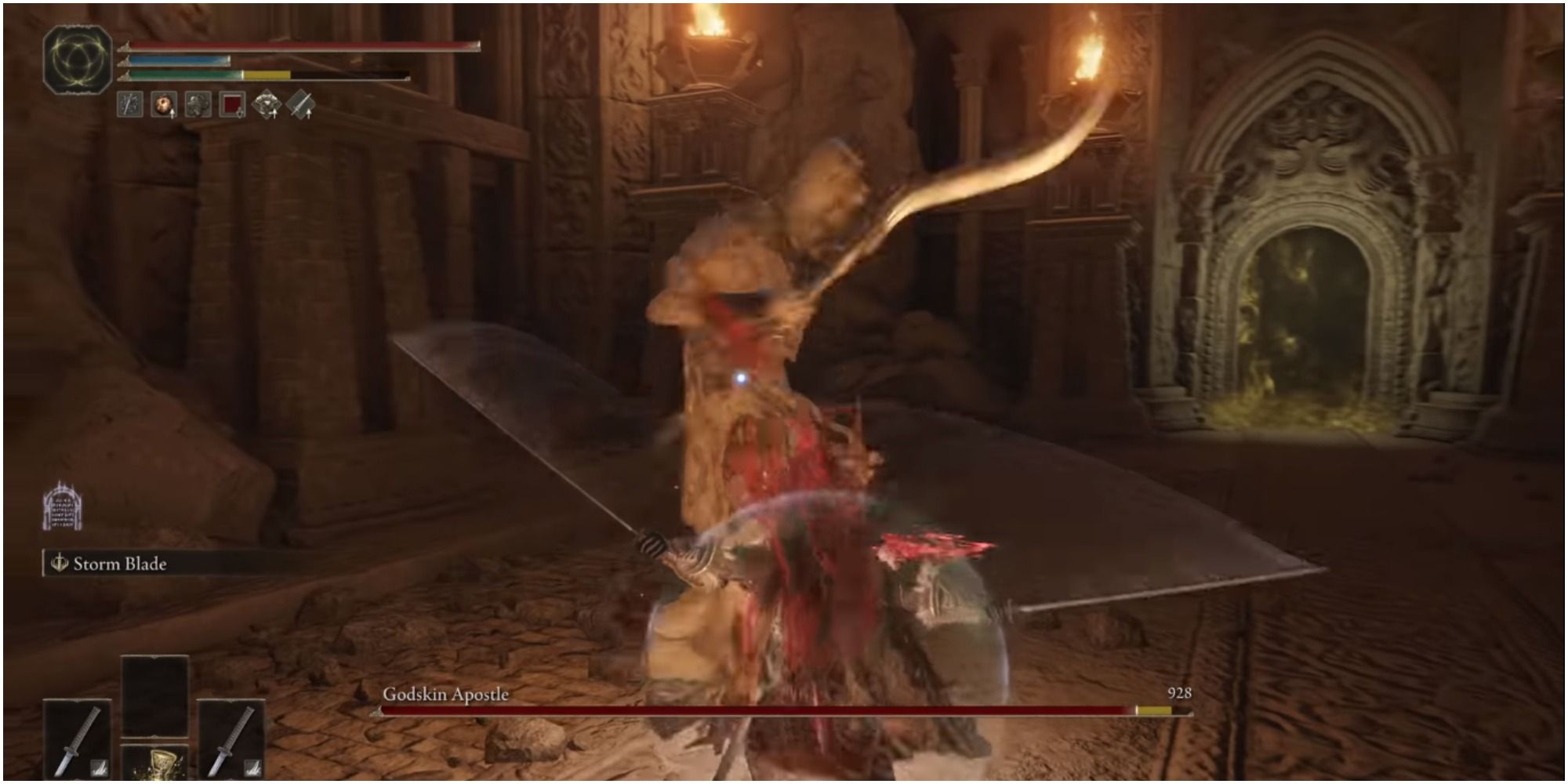 Avoid using Faith weapons and Skills as the boss has a strong resistance against Holy damage. Heavy weapons can also be helpful as a few jumping heavy attacks can break his posture. 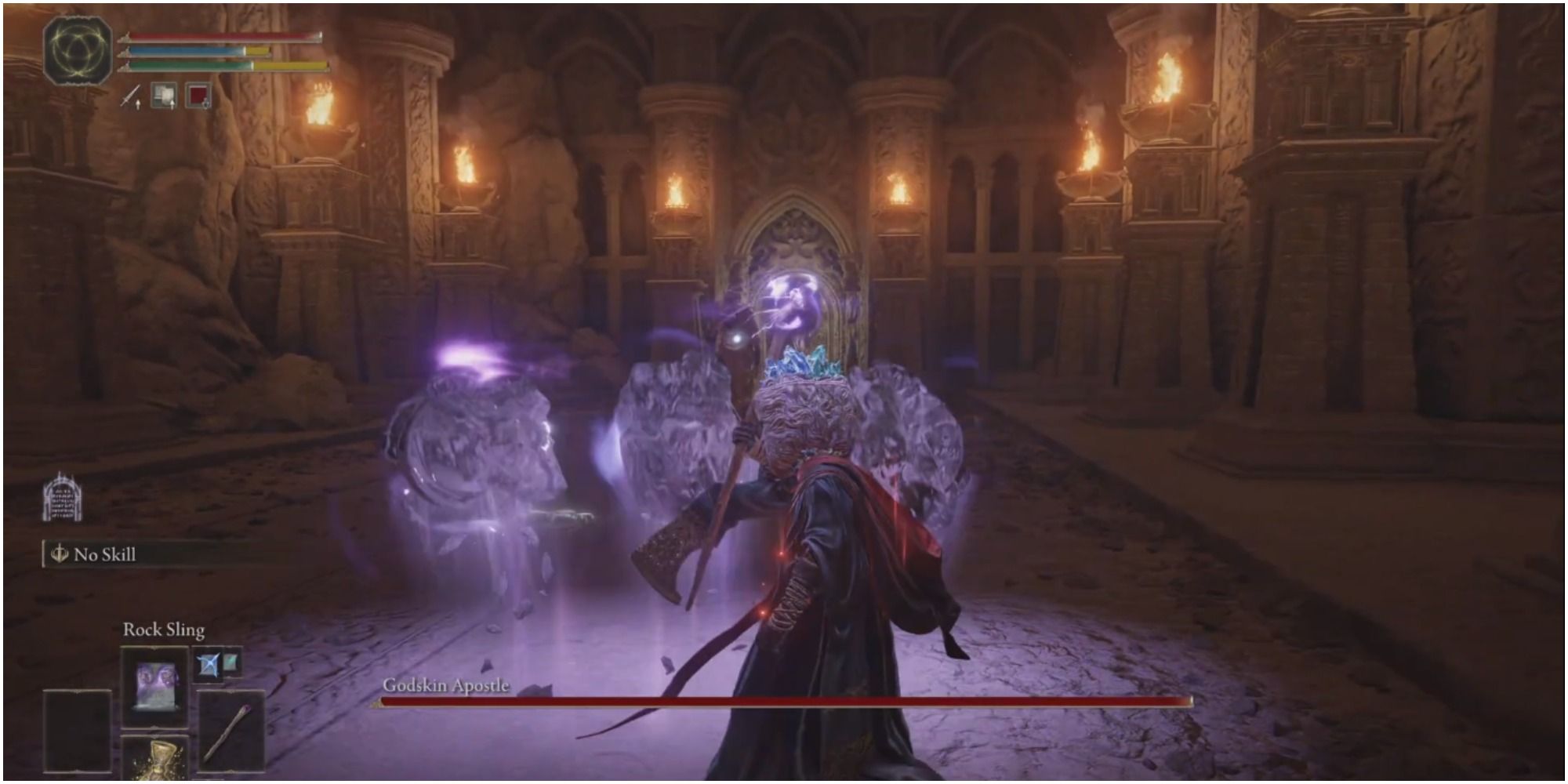 For the ranged strategy, you can either cheese the boss or spam different sorceries till he dies. If you are frustrated from the fight and have faced him multiple times, then you can go for the cheese. This will require you to have Comet Azur (Sorcery). As you acquire the Sorcery in Atlas Plateau, you can use it for the Windmill Village encounter and also the Caelid encounter if you face him later on. Put Cerulean Hidden Tear in your Wondrous Flask and drink it as you enter the fight. You can summon any Spirit Ash, then can tank the boss for a couple of seconds. The Hidden Tear will allow you to use Comet Azur for more than ten seconds, decimating the boss's health bar.

If you do not have Comet Azur, you can use the Wondrous Flask and spam other sorceries like Rock Sling, which has high output damage and can break the boss' poise often. 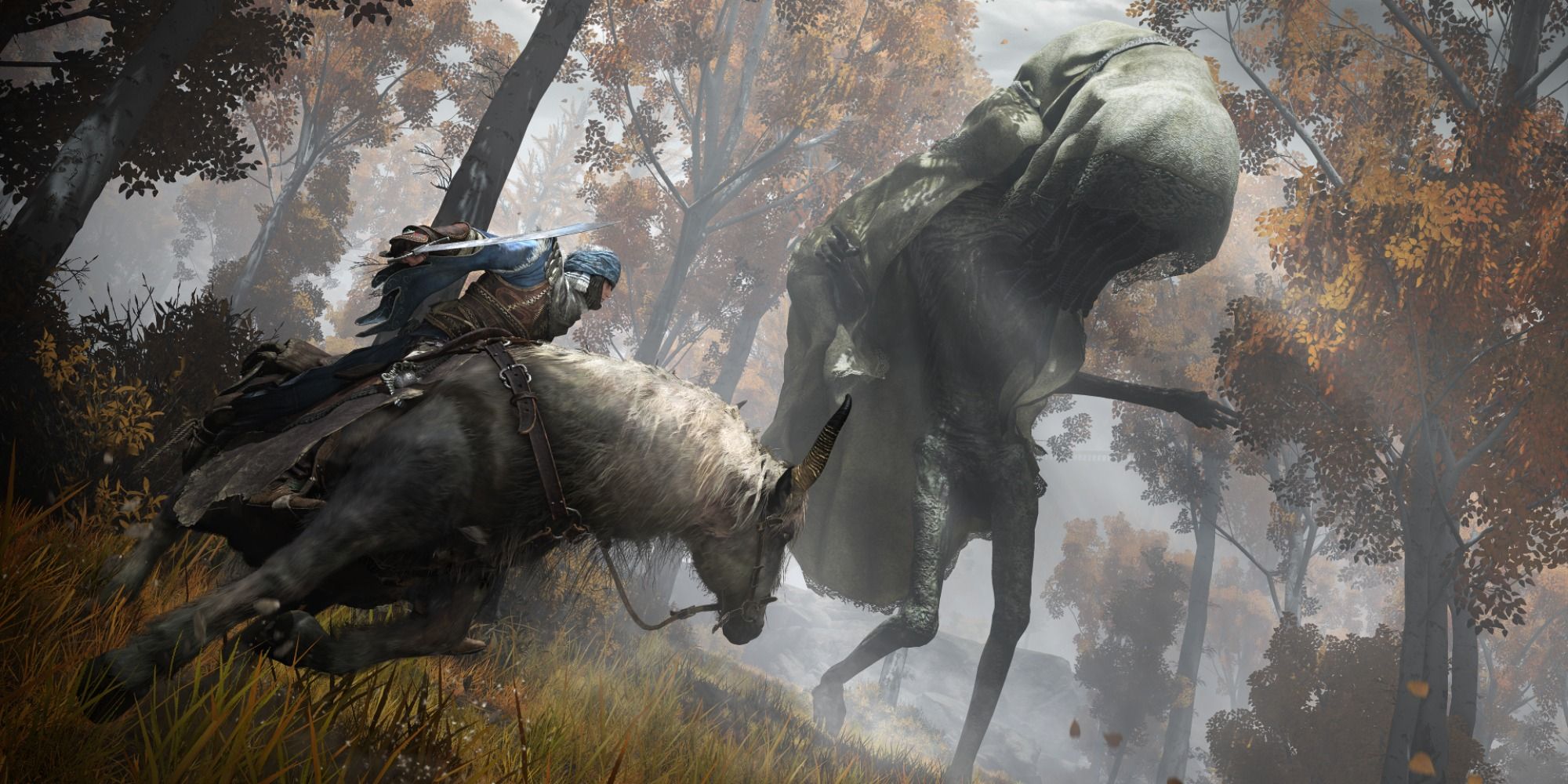