Elden Ring has a variety of bosses scattered throughout the vast areas of the Lands Between. One of these bosses is Morgott, the Omen King. Morgott makes his first appearance in Stormveil Castle and is a boss that you have to overcome. However, he goes by the name Margit the Fell Omen there. Your second encounter with him will be at the top of Leyndell, Royal Capital guarding the Elden Ring. 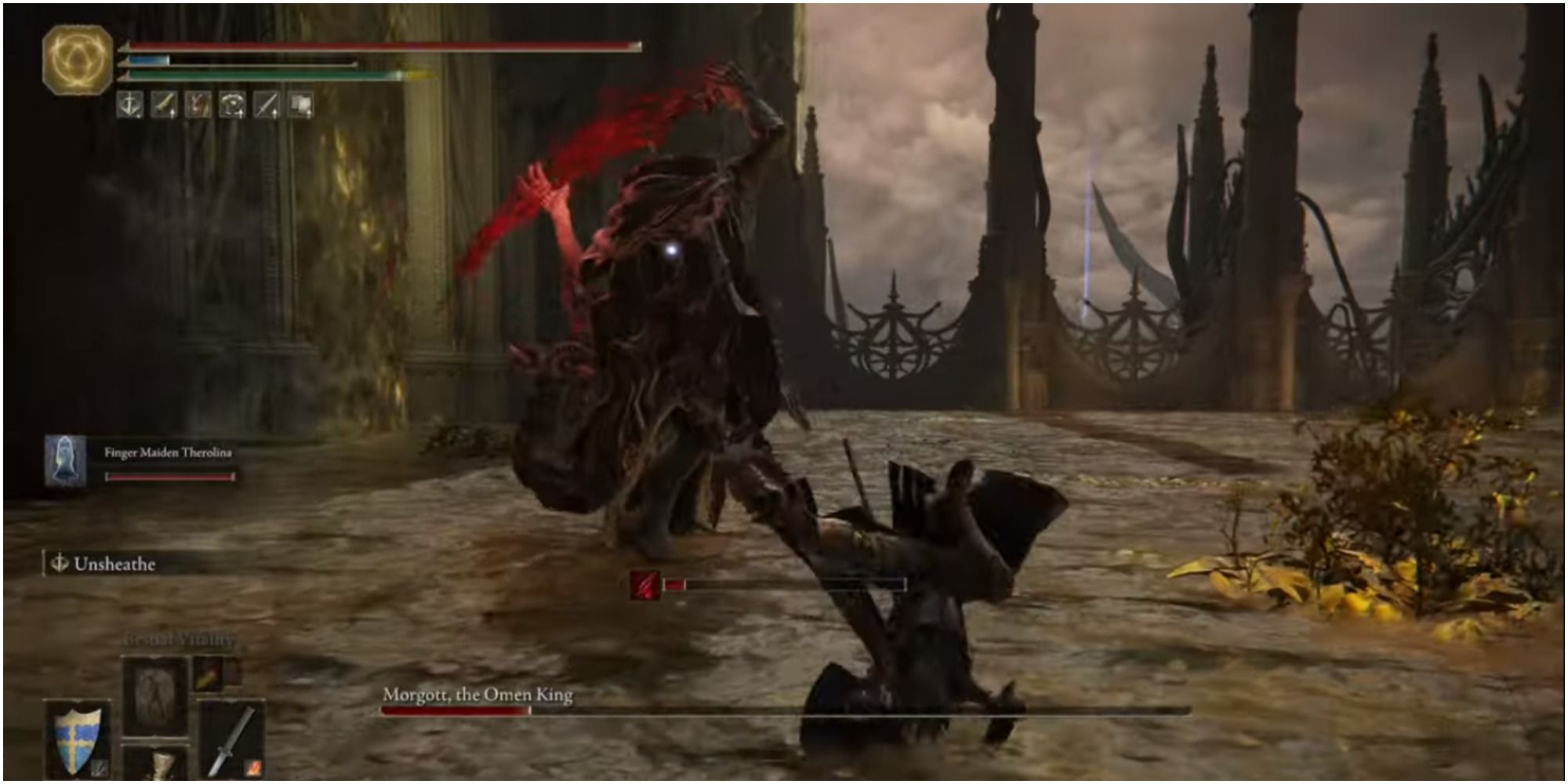 Morgott shares some attacks to his previous boss variant, Margit. However, in this fight, the boss has a few new attacks plus a second phase that allows him to blood loss on the player. Holy Blade Rain and Bloody Thrust are some of the few attacks you need to watch out for as they deal a lot of damage. 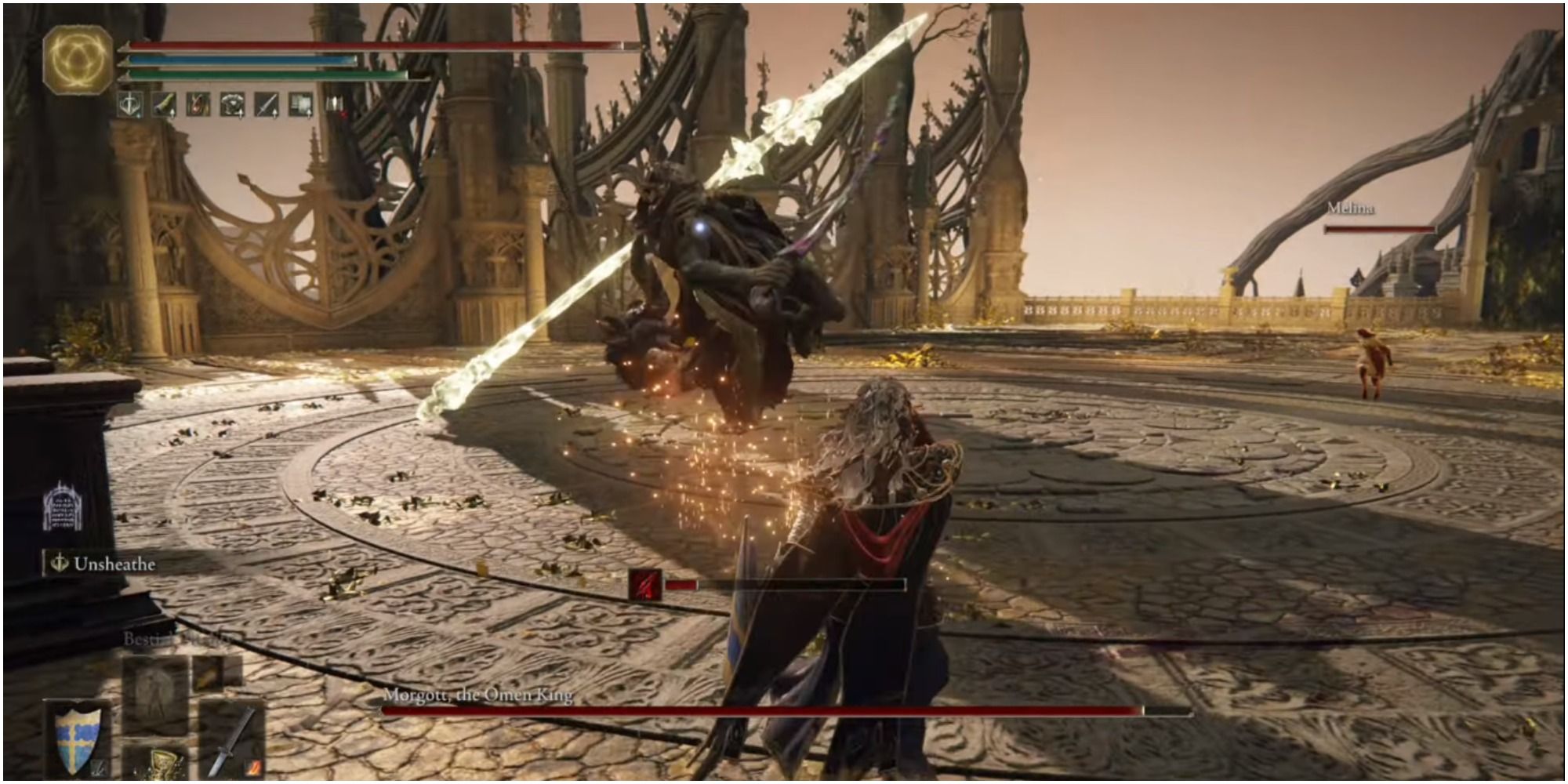 Morgott manifests a large Holy Spear and throws it at the player.

Counter: Roll forward as the boss throws the spear to avoid it. 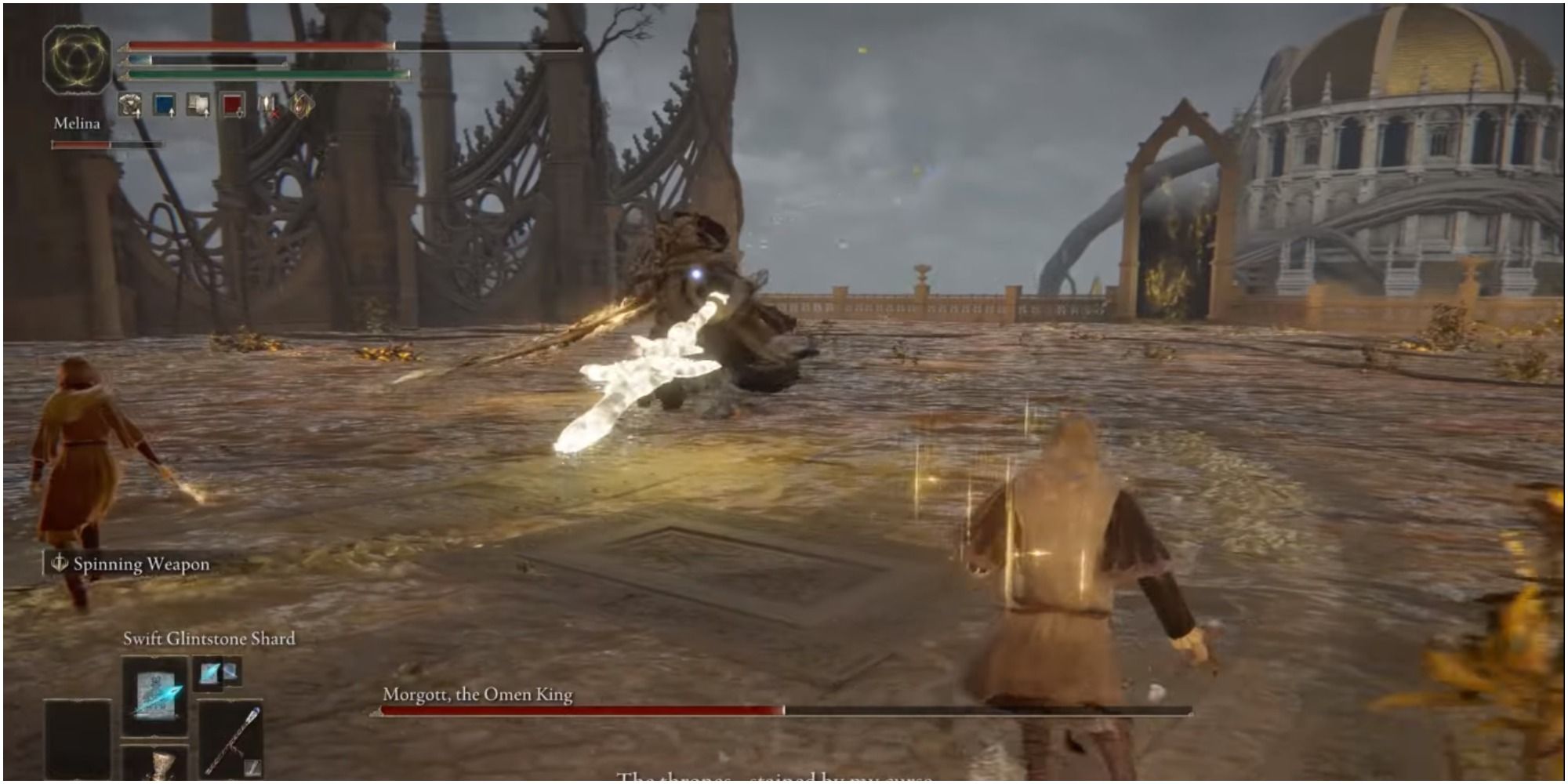 The boss creates a large Holy Spear in his hand and charges at the player with it.

Counter: Roll to either side of the boss. 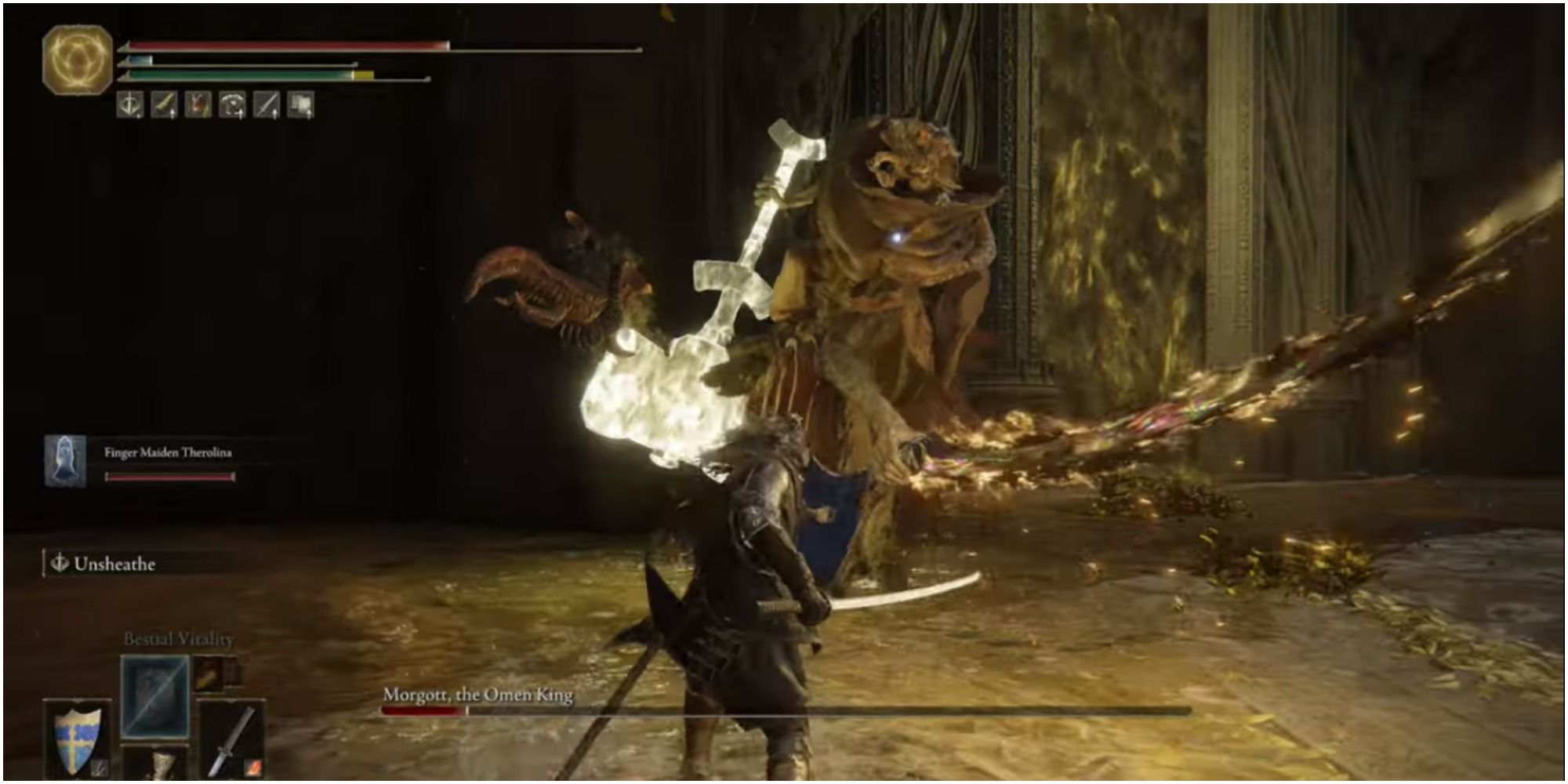 Morgott creates a Holy Hammer in his hand and slams it down on the player. He can sometimes perform this attack while jumping.

Counter: Either create some distance by rolling backward or dodge to the side. 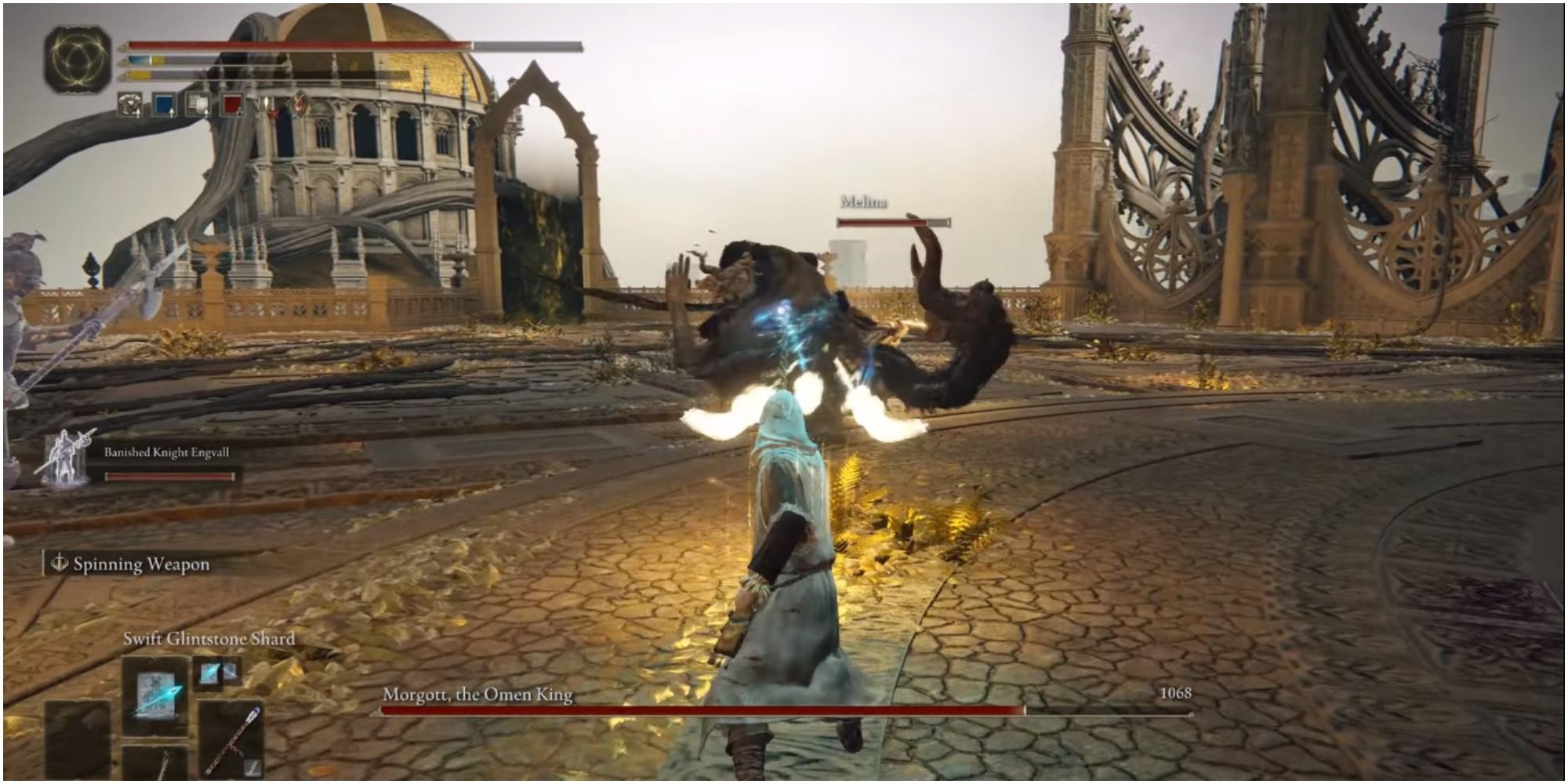 The boss manifests three daggers and throws them in the player's direction.

Counter: Rolling forward will avoid all the three daggers. 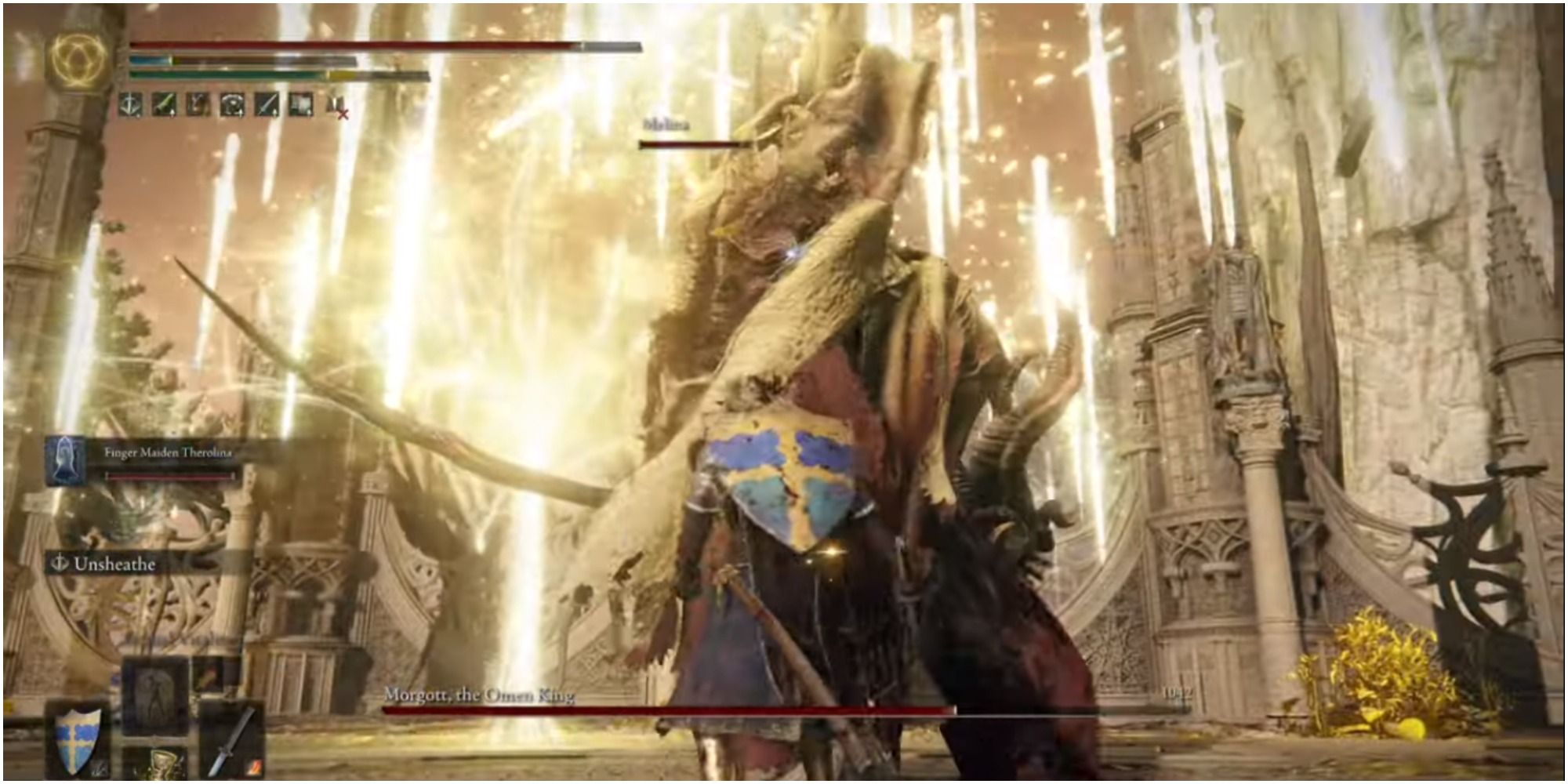 Morgott casts a spell causing holy swords to fall on the ground around him. Half of the sword will stay on the ground while half keep falling from the sky.

Counter: You need to look up and see where the swords will drop while keeping a fair distance away from Morgott. 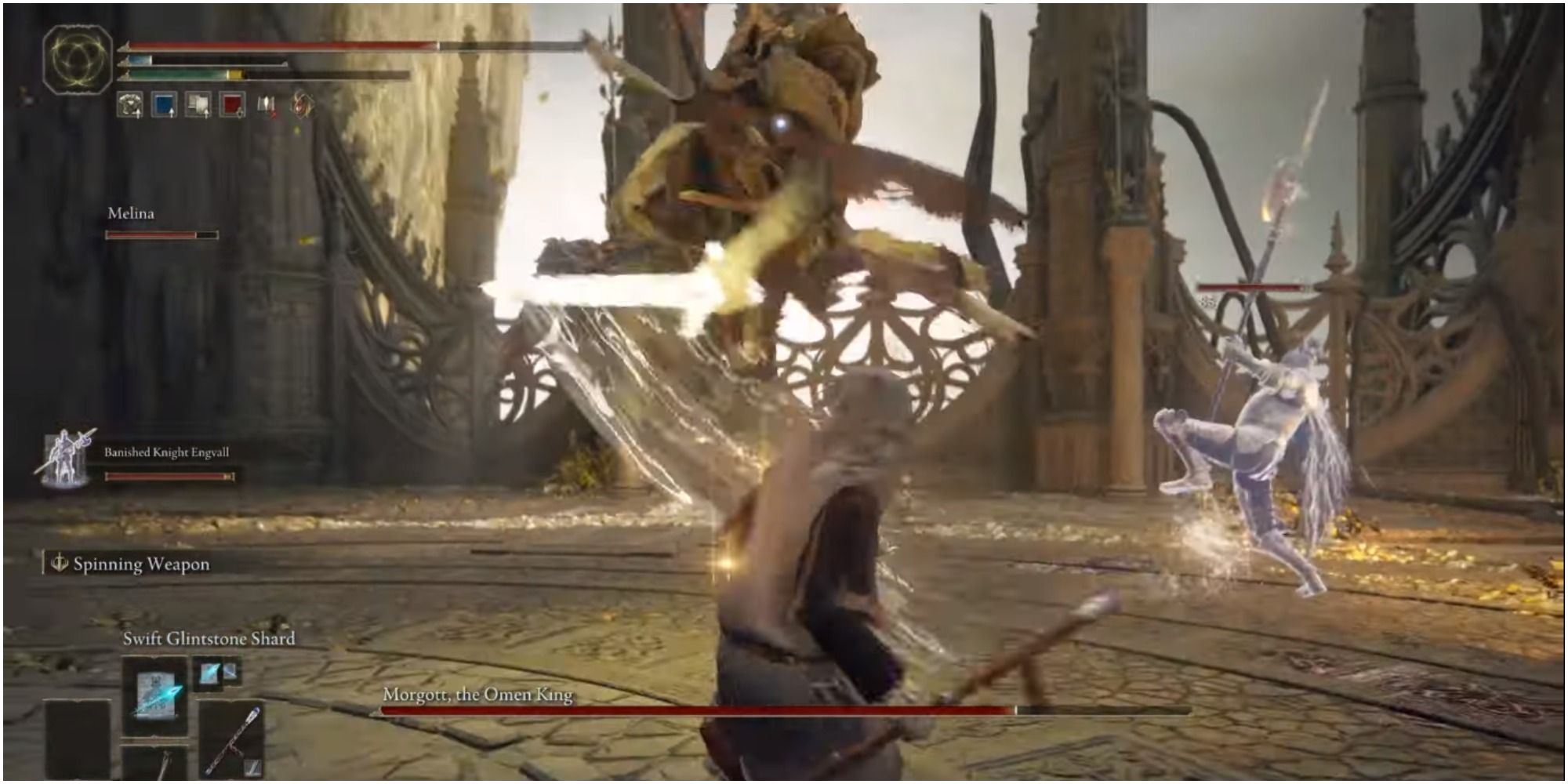 Counter: Try to roll away when you see the boss dashing at you. Keep rolling backward until the animation stops. 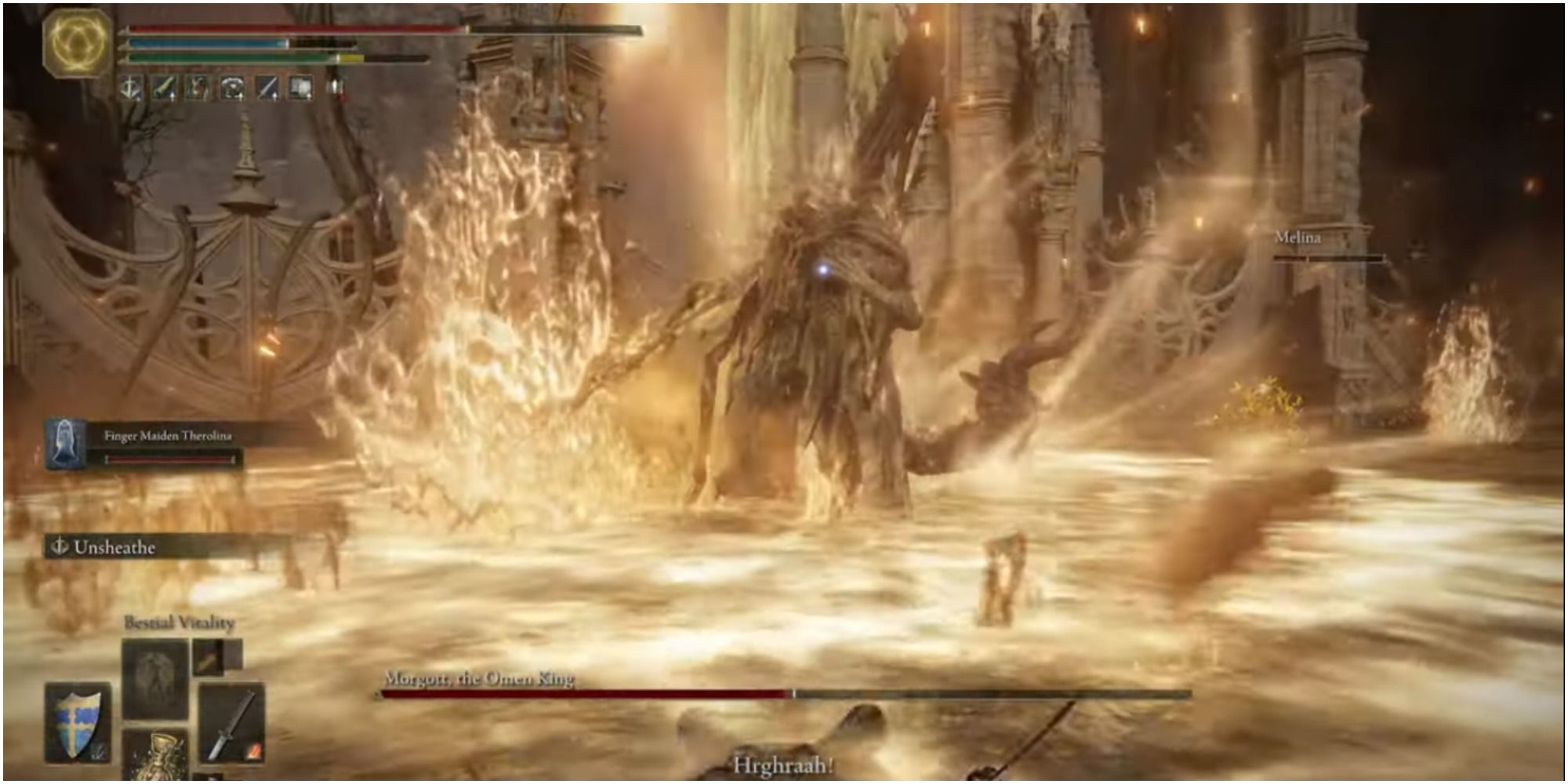 When the boss loses around 50% of his health, he screams, releasing a powerful burst of energy.

Counter: Get away from the boss.

The boss holds up his sword with both hands, and it starts to glow red. He then rushes at the player and slashes, which explodes after a second.

Counter: Roll towards the boss to avoid this attack. 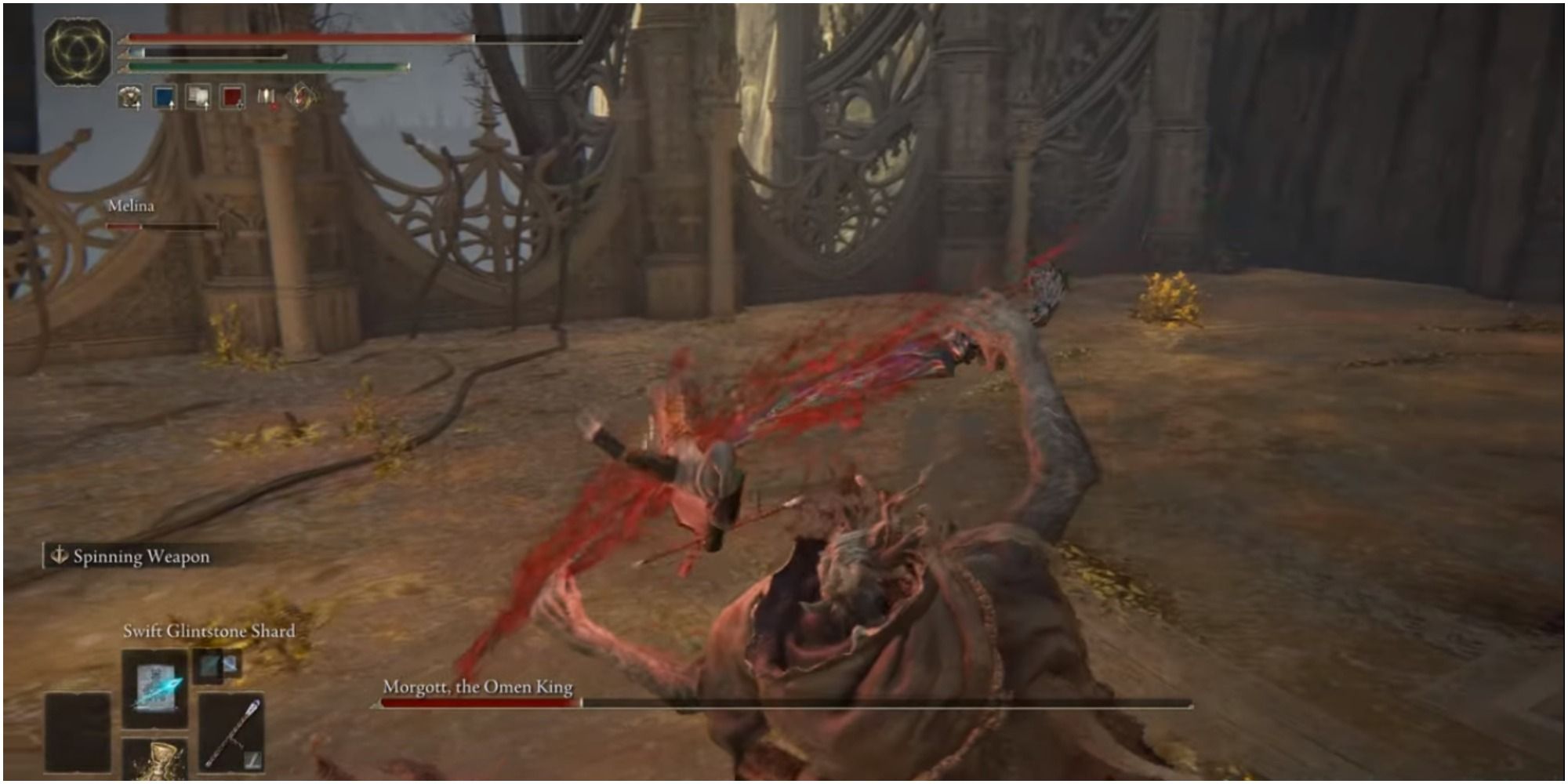 Similar to his Bloody Slash, the boss holds up his sword and charges at you while thrusting his sword into you. If the hit connects, you will see a small animation where he stabs his blade inside you and throws you back on the ground.

Counter: Roll towards the boss to avoid this attack. Do not roll back as the reach on this attack is quite long and can hit you. 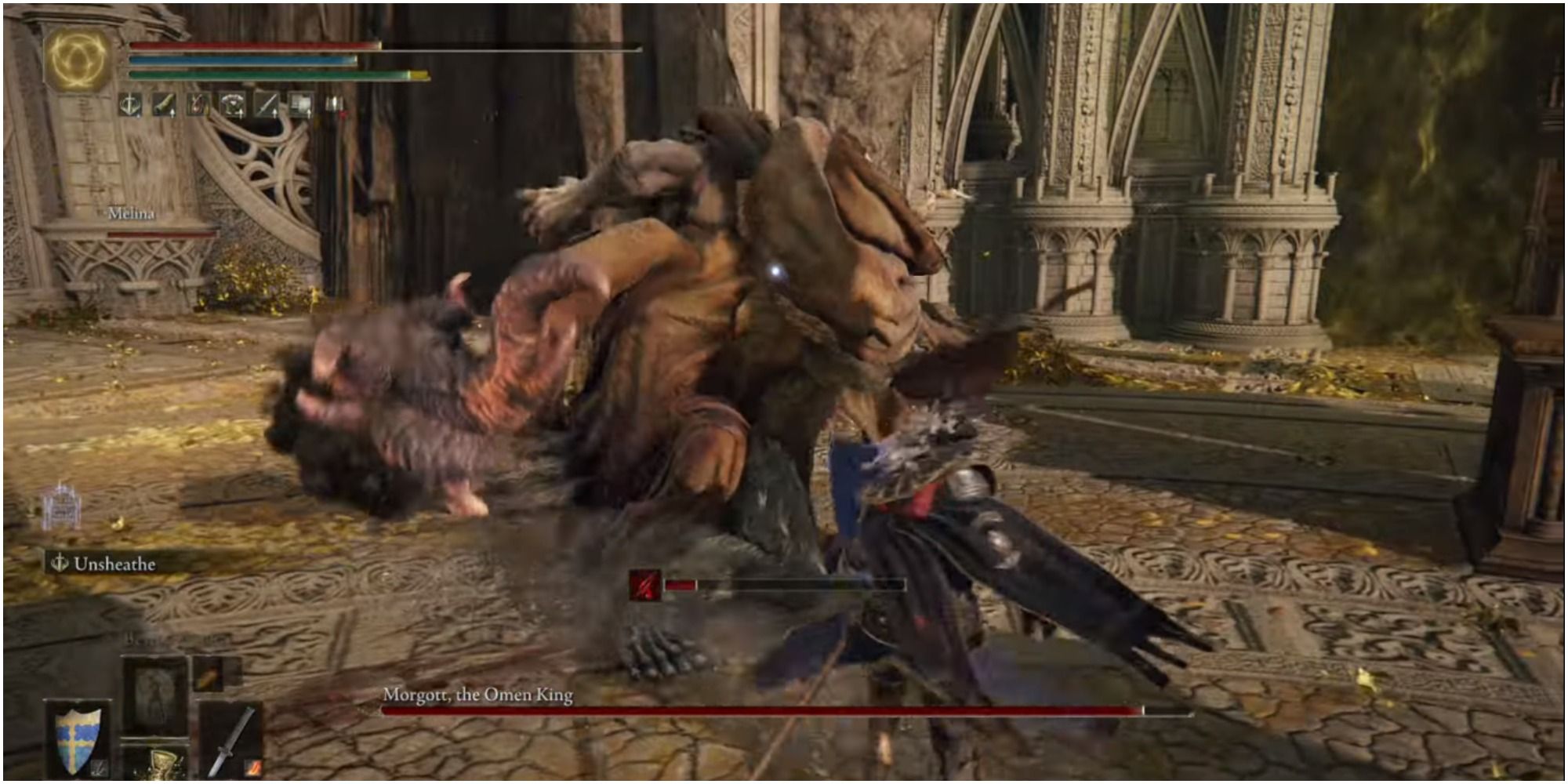 There are two main strategies for this fight: you can bring a sword that has high Slash damage and put Ice Scaling on it, so it deals more damage to Morgott – or you can use Sorcery to lower his health. Alternatively, inflicting Bleed will take off a nasty chunk of his health. 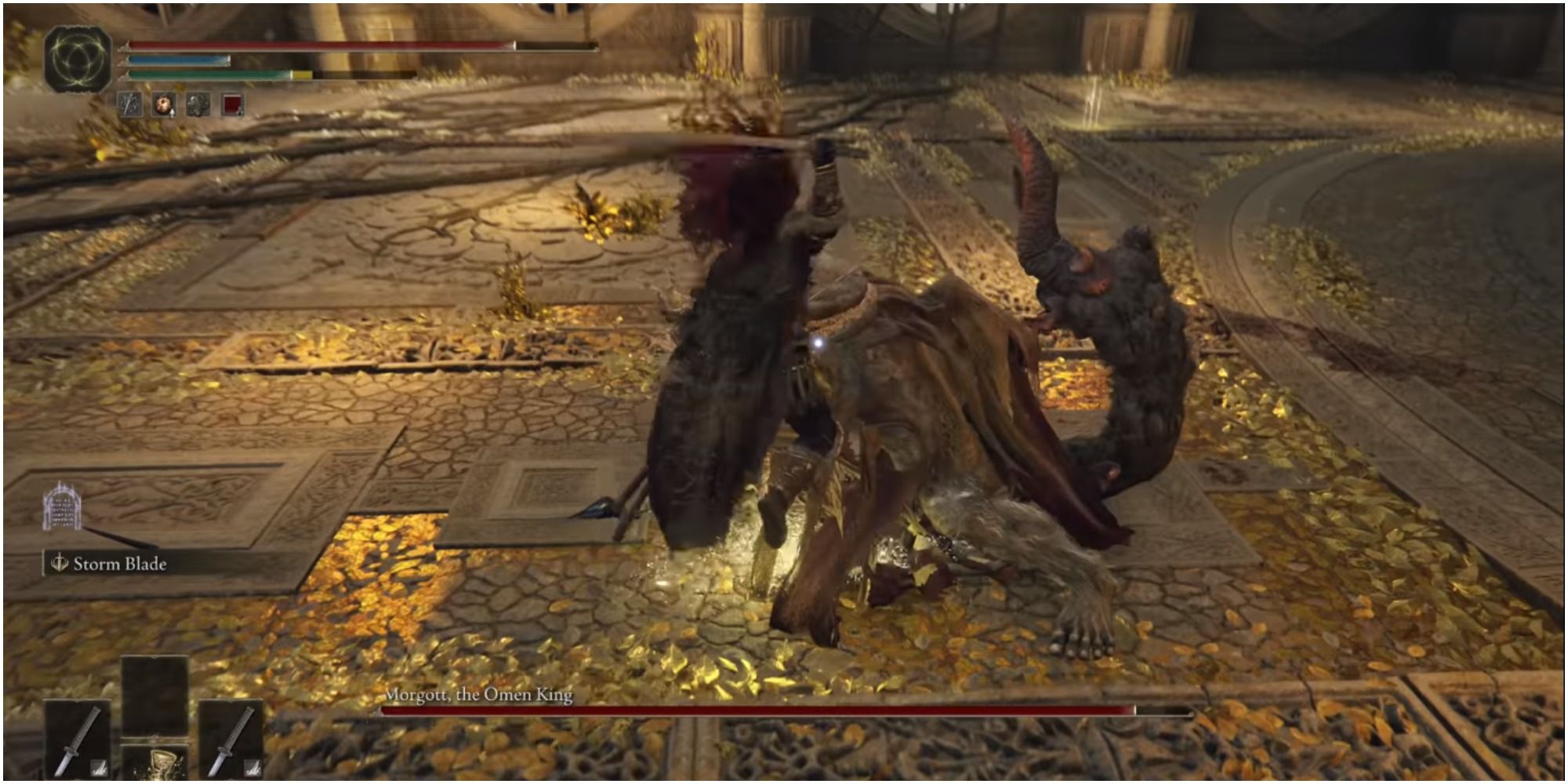 Bringing a weapon like an upgraded Icerind Hatchet can be useful because of its useful Ash of War, Hoarfrost Stomp. You can also acquire this Ash of War by killing the invisible Scarab near Caria Manor to put it on any other Slash Weapon.

Margit and Morgott are similar in many ways. You can take this to your advantage by using Margit's Shackle to bind both bosses for a few seconds twice in the fight.

If you are uncertain whether you can dodge a specific attack, you can cancel his animation by using this item.

As Melina's goal is for you to become the Elden Lord, she can assist you as a summon in this fight. You can also summon other online players to help you with the fight. 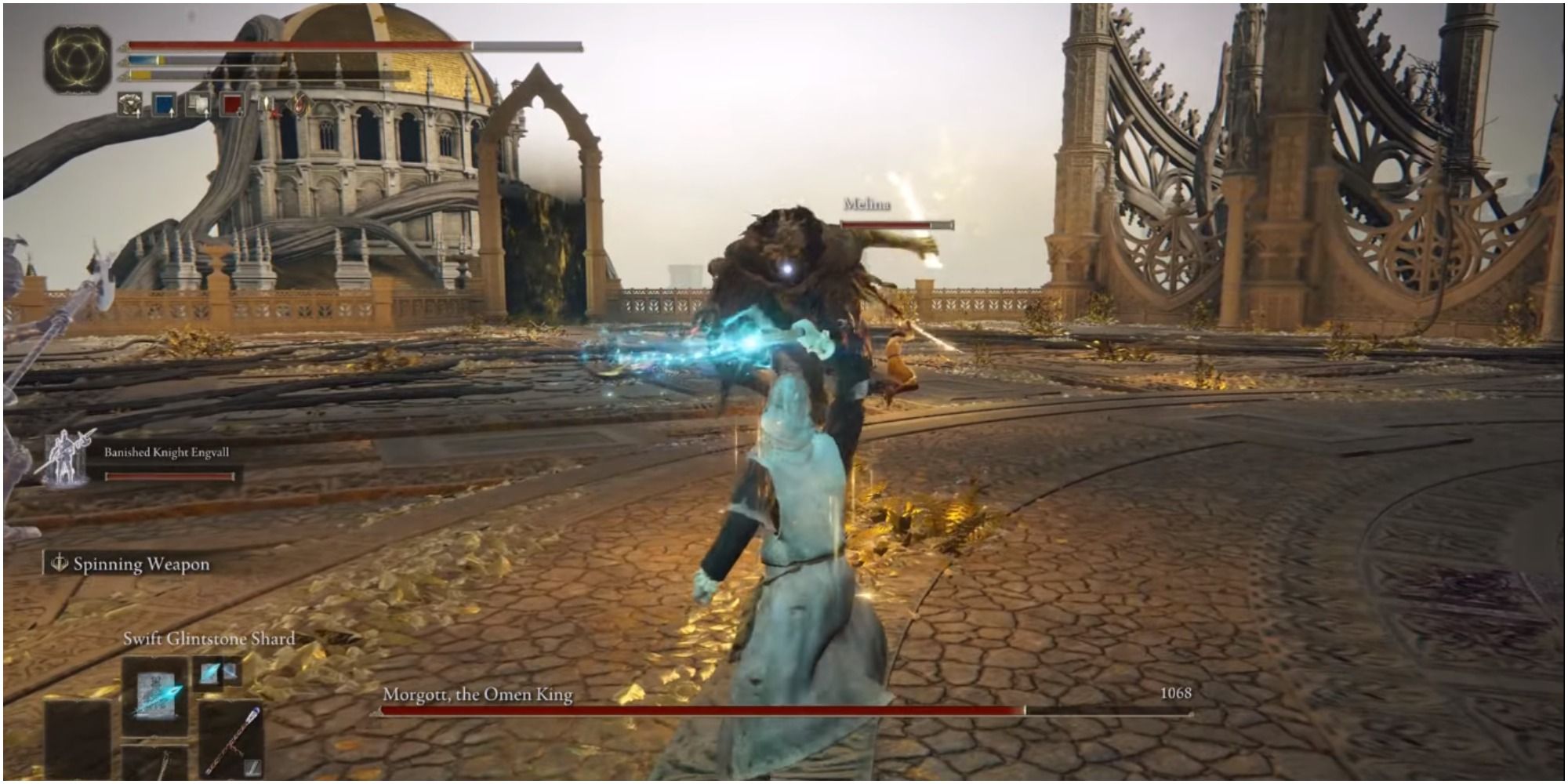 For the ranged strategy, you use Swift Glintstone Shard (Sorcery) to constantly poke the boss at long range. Aside from that, you can also use Comet Azur, which does a lot of damage but takes up quite a lot of your FP.

Do not use long cast Sorceries or Incantations as the boss's attacks have very long reach, and he can charge at you. You can also make use of Carian Slicer (Sorcery), but this will require you to get close to the boss.