The final boss fight in Elden Ring is a long and memorable one. The game has you facing Radagon, a God inside the Erdtree in Leyndell, Ashen Capital. Similar to many other major fights in the game, the Radagon encounter also has two phases. The only difference is that you will be facing different beings in each phase.

The second phase of the fight revolves around fighting the Elden Beast. However, there's a significant challenge involved; if you make it to the second phase only to die, you will have to start the encounter all over again. Here is all you need to know about Radagon of the Golden Order.

Radagon Of The Golden Order Overview 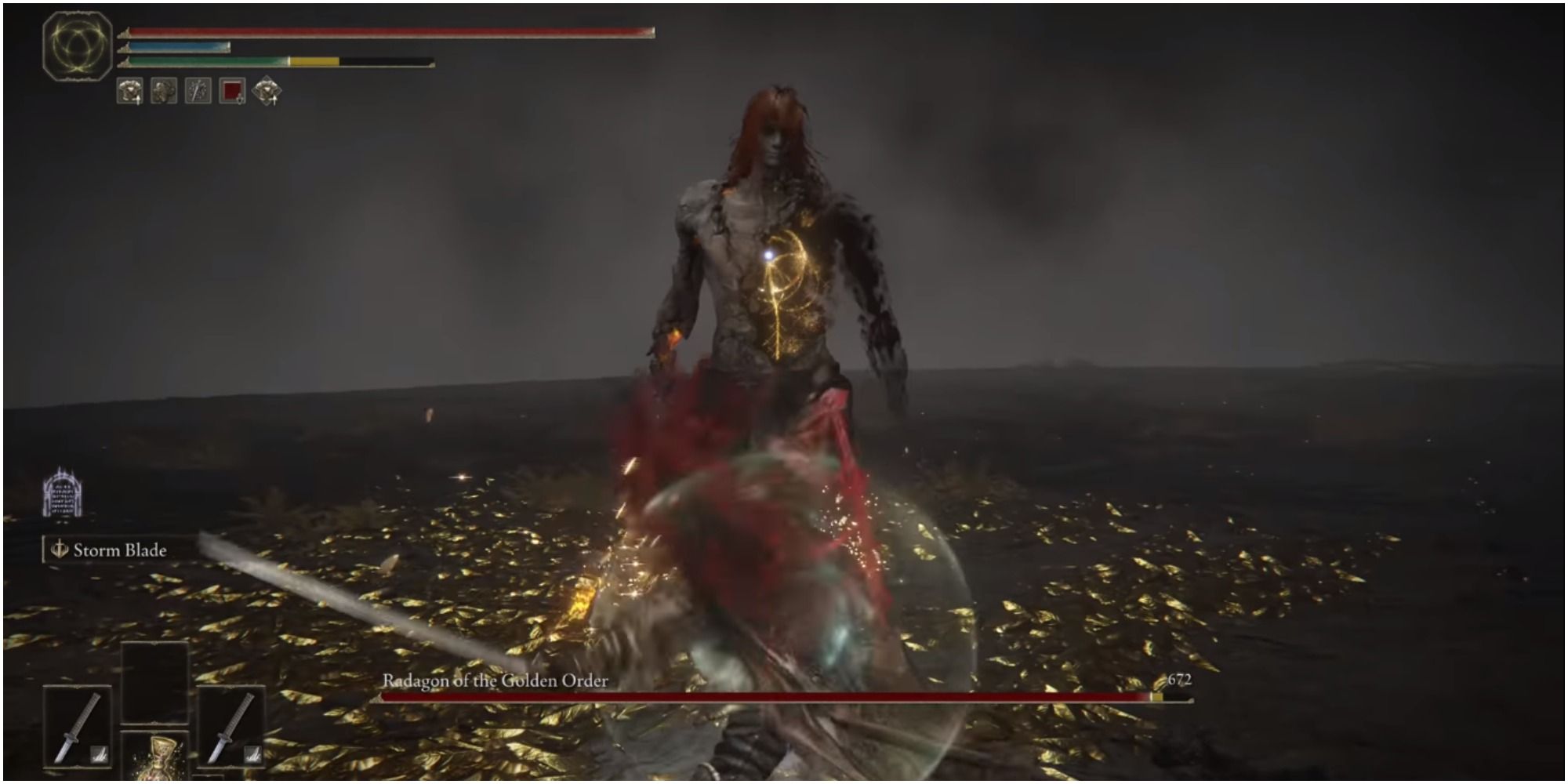 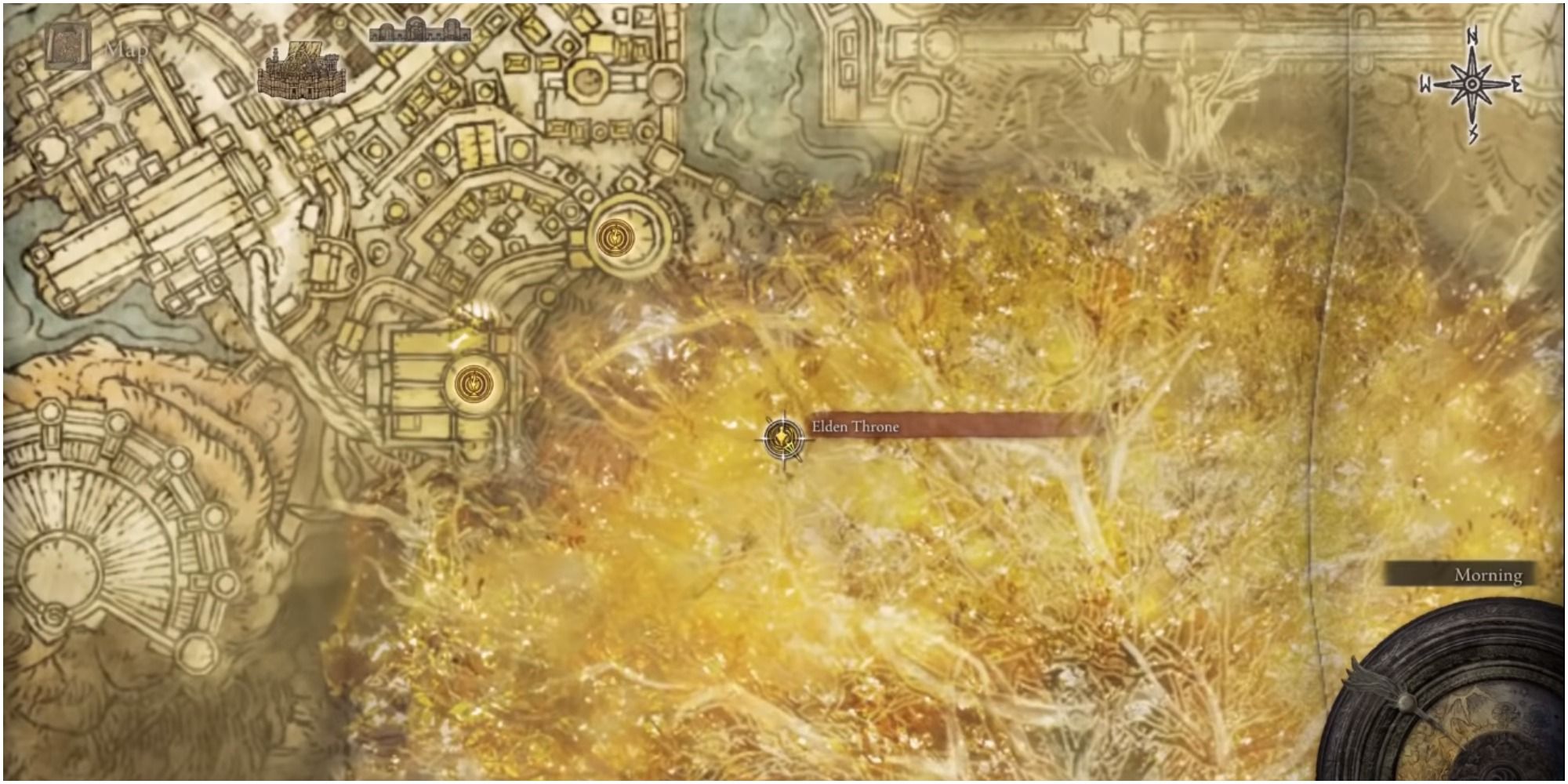 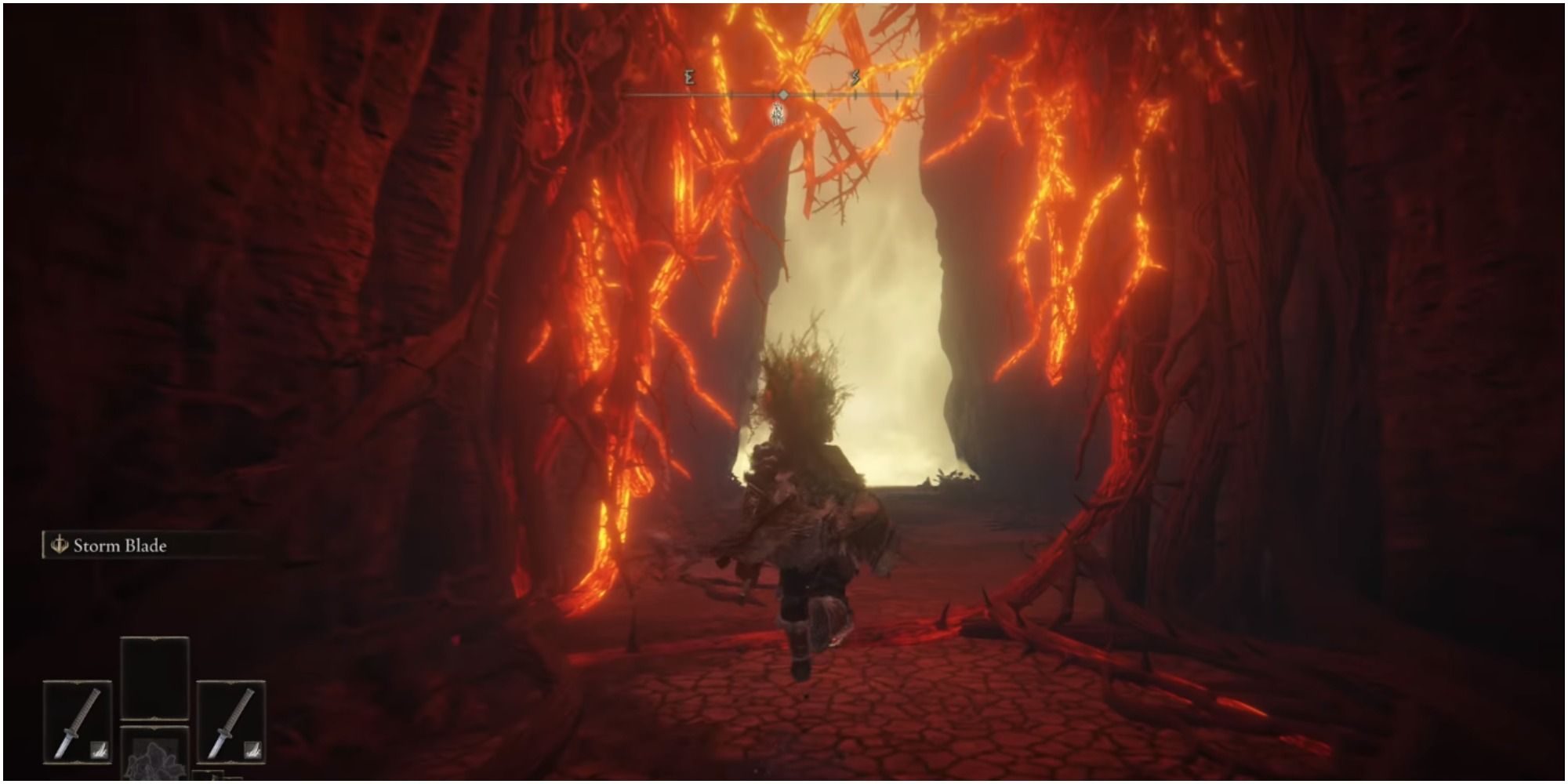 Radagon of the Golden Order is located inside the Erdtree in Leyndell, Ashen Capital. You will face the boss after defeating Hoarah Loux, Warrior. The cutscene shows Queen Marika shackled up, turning into Radagon as soon as she holds the hammer. The encounter isn't optional, being necessary to complete the game and see any endings. Defeating Radagon will automatically start the next fight with Elden Beast. There are no summonable NPCs here, so you will have to rely on other online players or Spirit Ashes if you need help.

Radagon Of The Golden Order Attacks 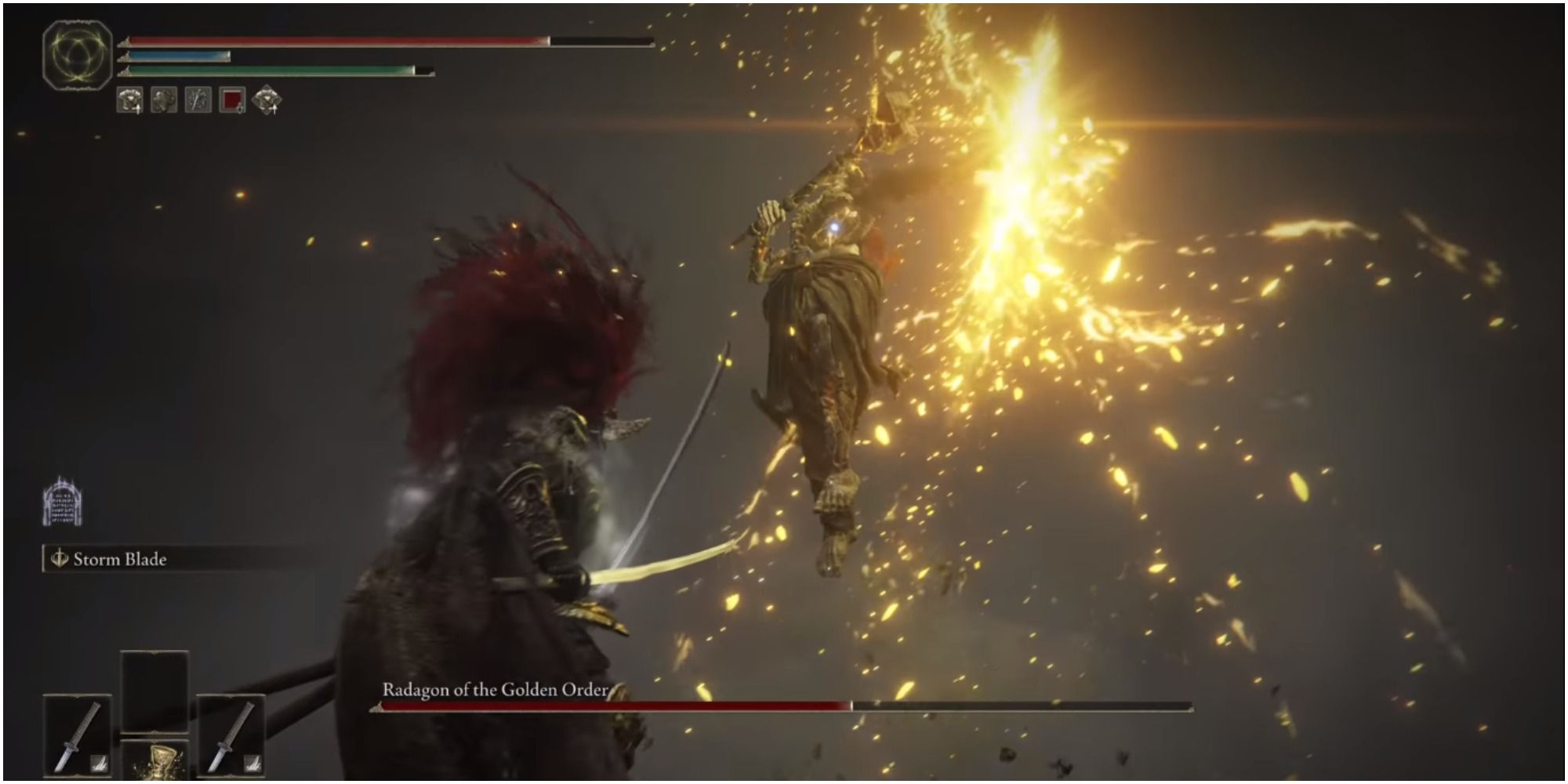 Radagon of the Golden Order has a lot of attacks, most of which have high tracking making them hard to dodge. The attacks to look out for are Holy Grab and Charged Slams. 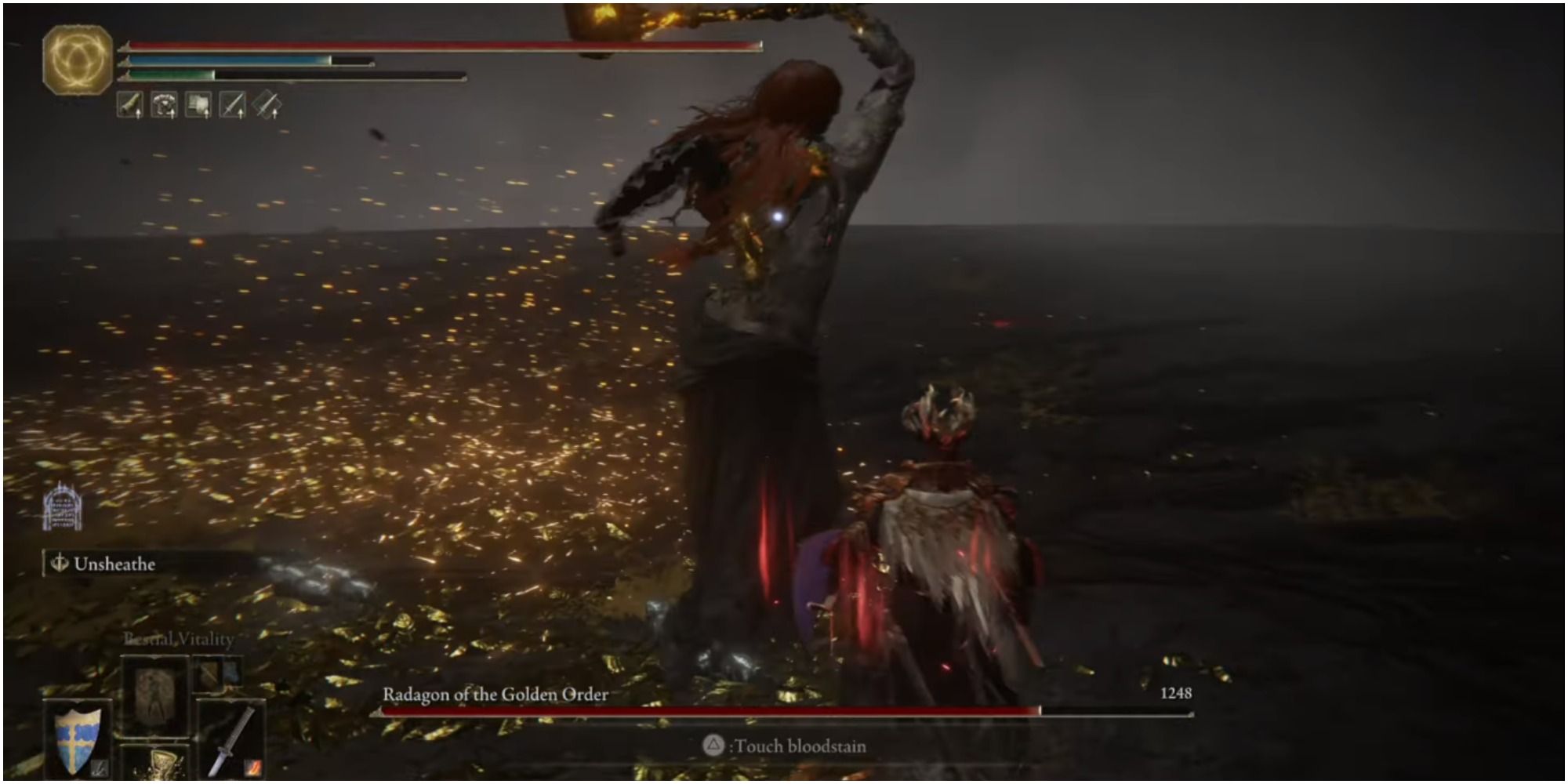 Radagon performs consecutive hammer strikes from either side. The boss can follow up with a slam.

Counter: These attacks have slow animations, giving you enough time to roll towards the attack every time. Rolling back is also an option, but the tracking can sometimes hit you. 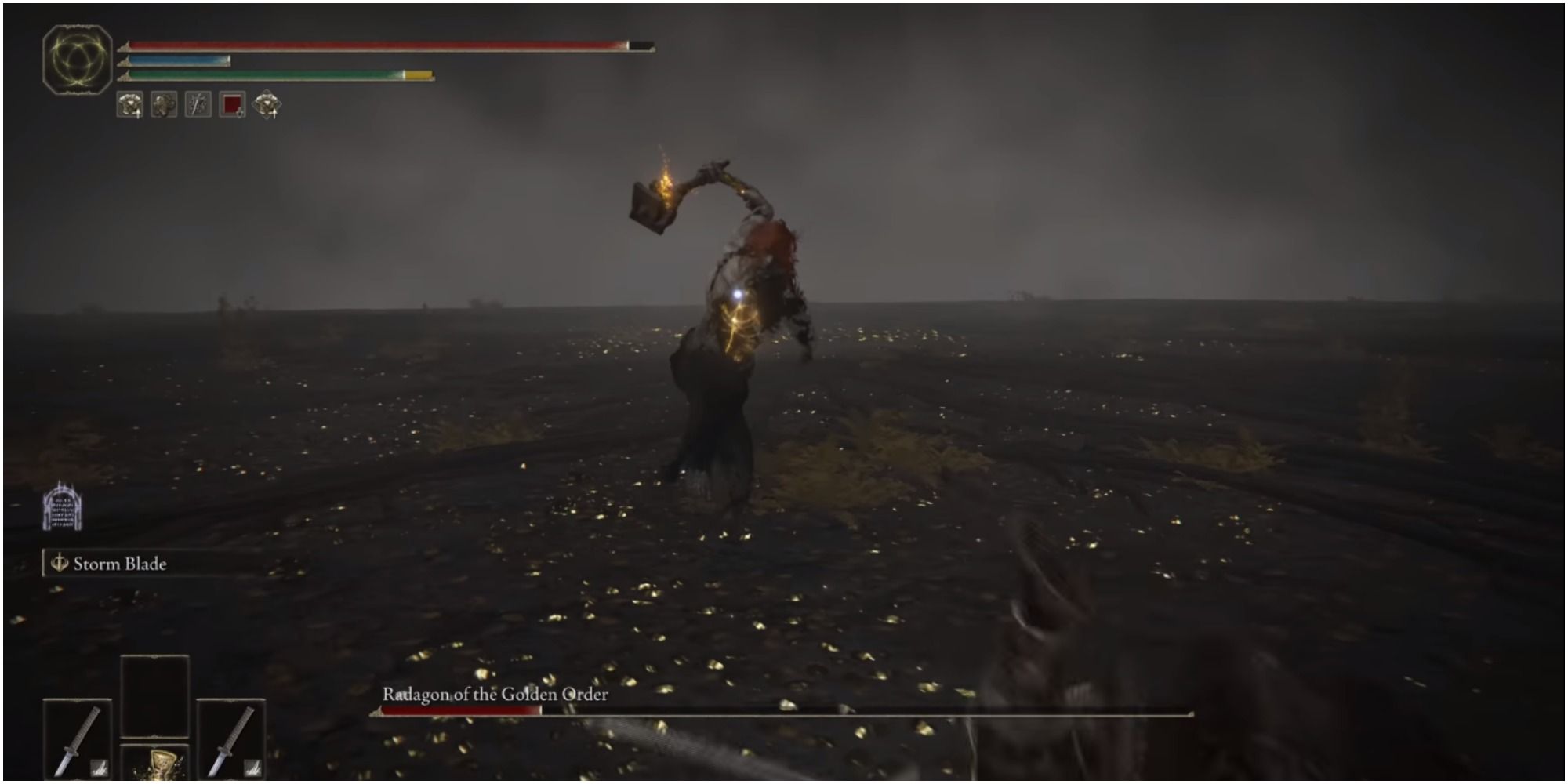 The boss shoves his hammer, knocking the player down.

Counter: Dodging to the side, or into the boss, will avoid the attack. 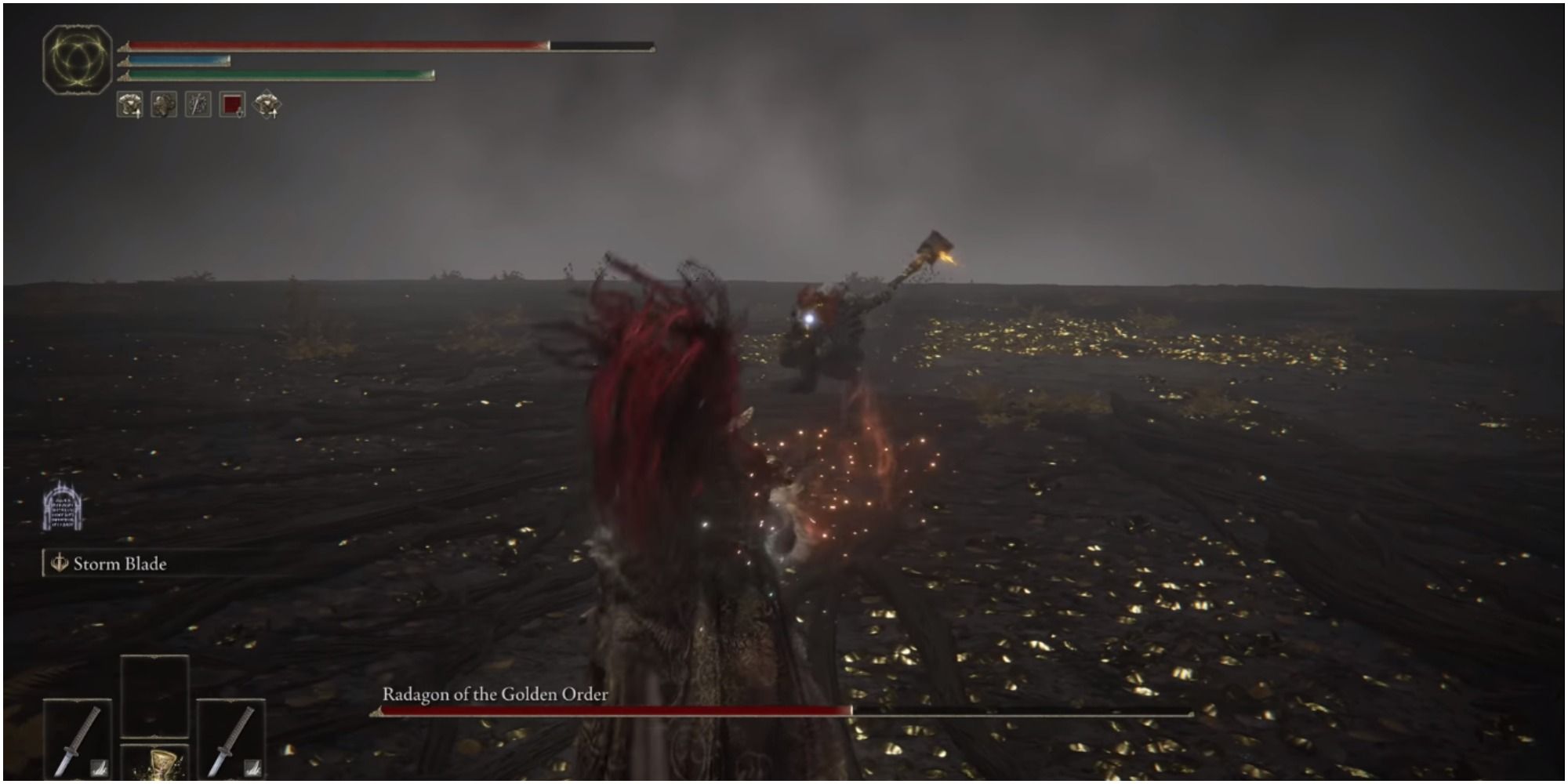 Radagon closes great distances by dashing forwards and striking the player with his hammer.

Counter: Dodging into the attack is the best option, and if the dodge is successful you'll have time to get a few hits in. 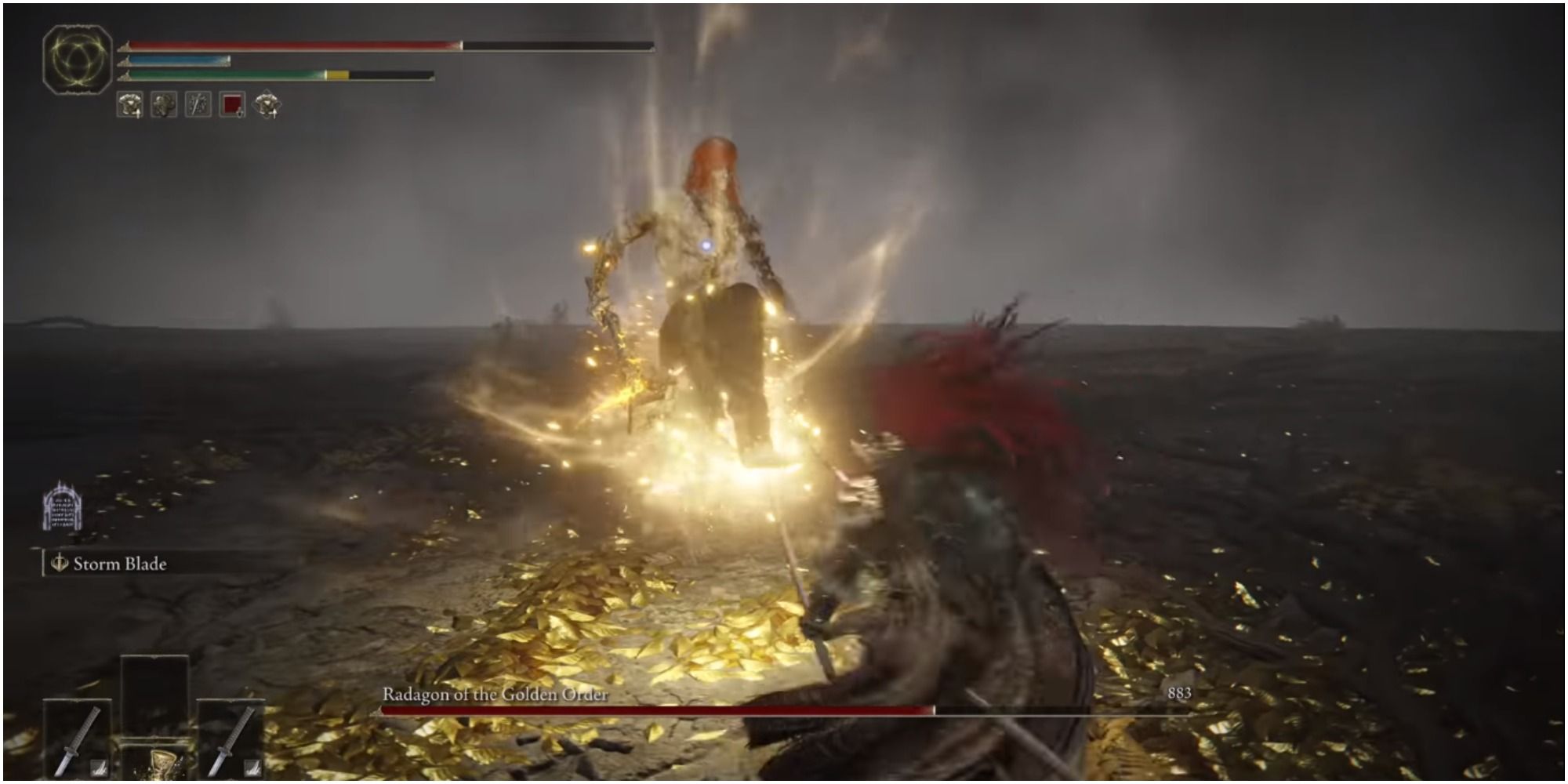 The boss raises his foot and charges Holy power within to slam it down on the ground. The attack deals AoE damage in a small radius ahead of the boss.

Counter: This attack is telegraphed, so you can start rolling back as soon as you see him raising his glowing foot. 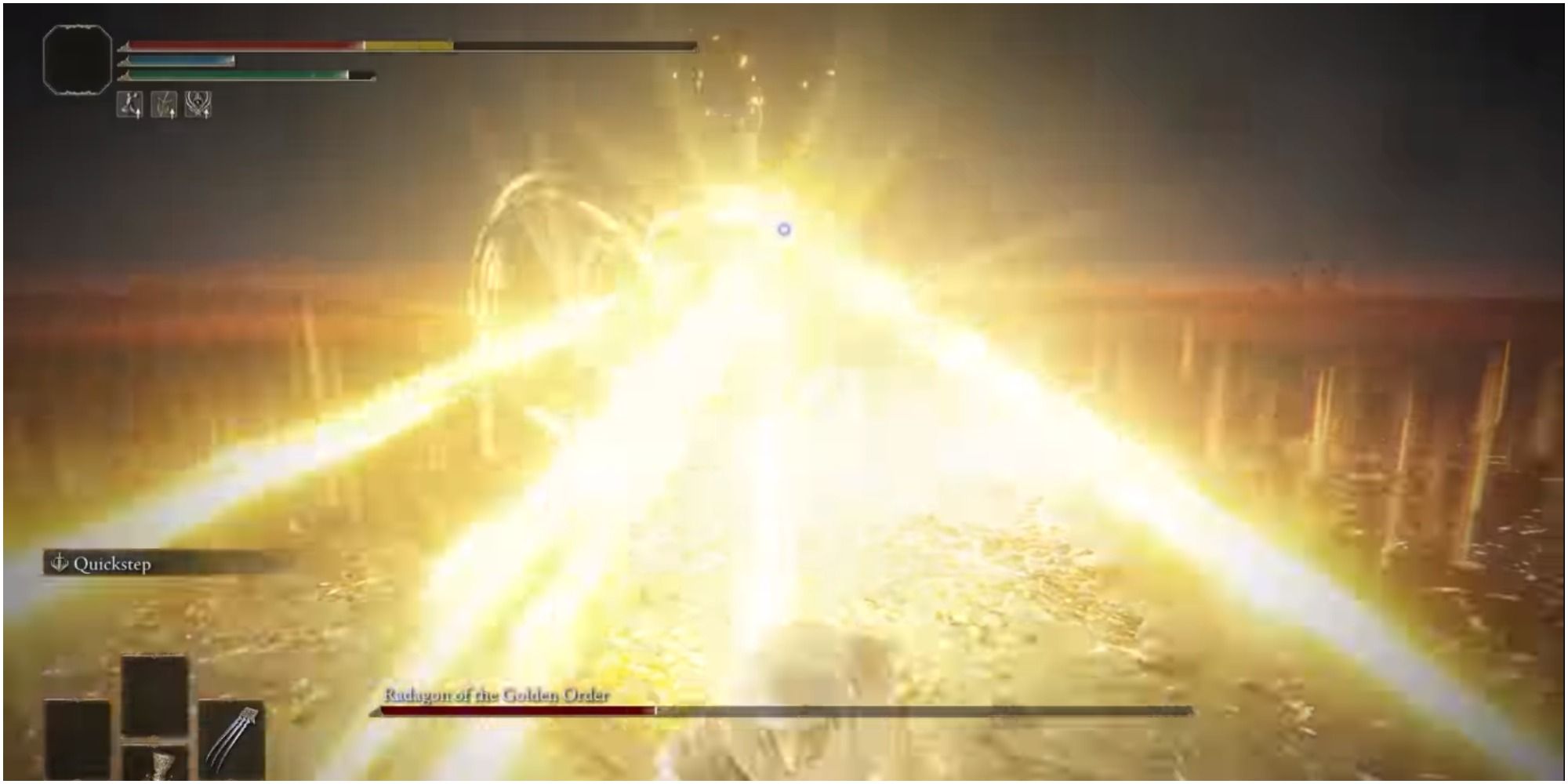 Radagon pulls back his left arm and launches five lightning bolts at the player. These bolts stick to the ground and explode after a second, causing minor explosions.

Counter: Rolling to the side will avoid these bolts. 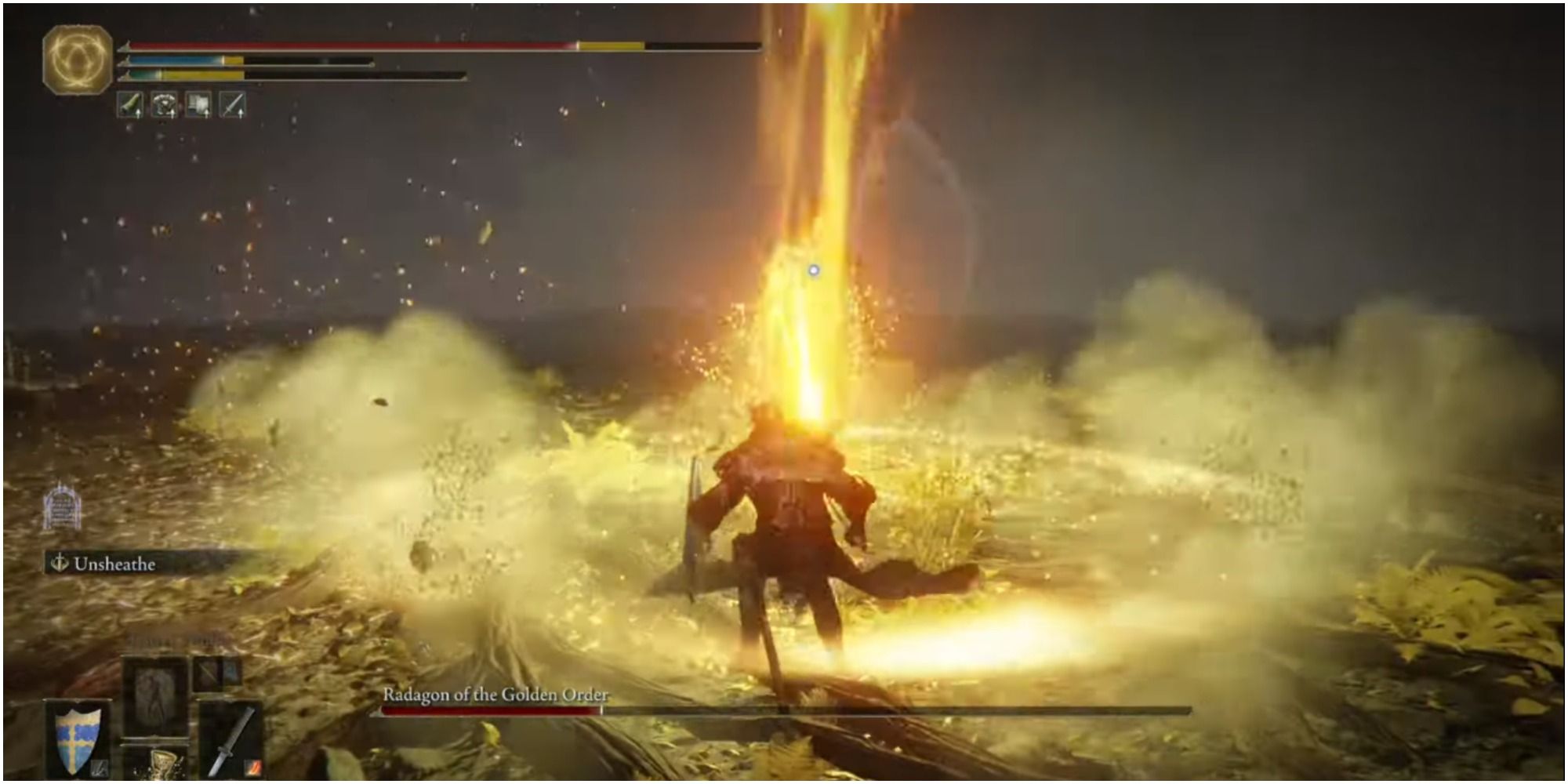 The boss occasionally teleports, then returns near the place he teleported from. He causes a minor AoE blast when he reappears.

Counter: Locking on allows you to see where the boss will appear, giving you time to roll back from that area. 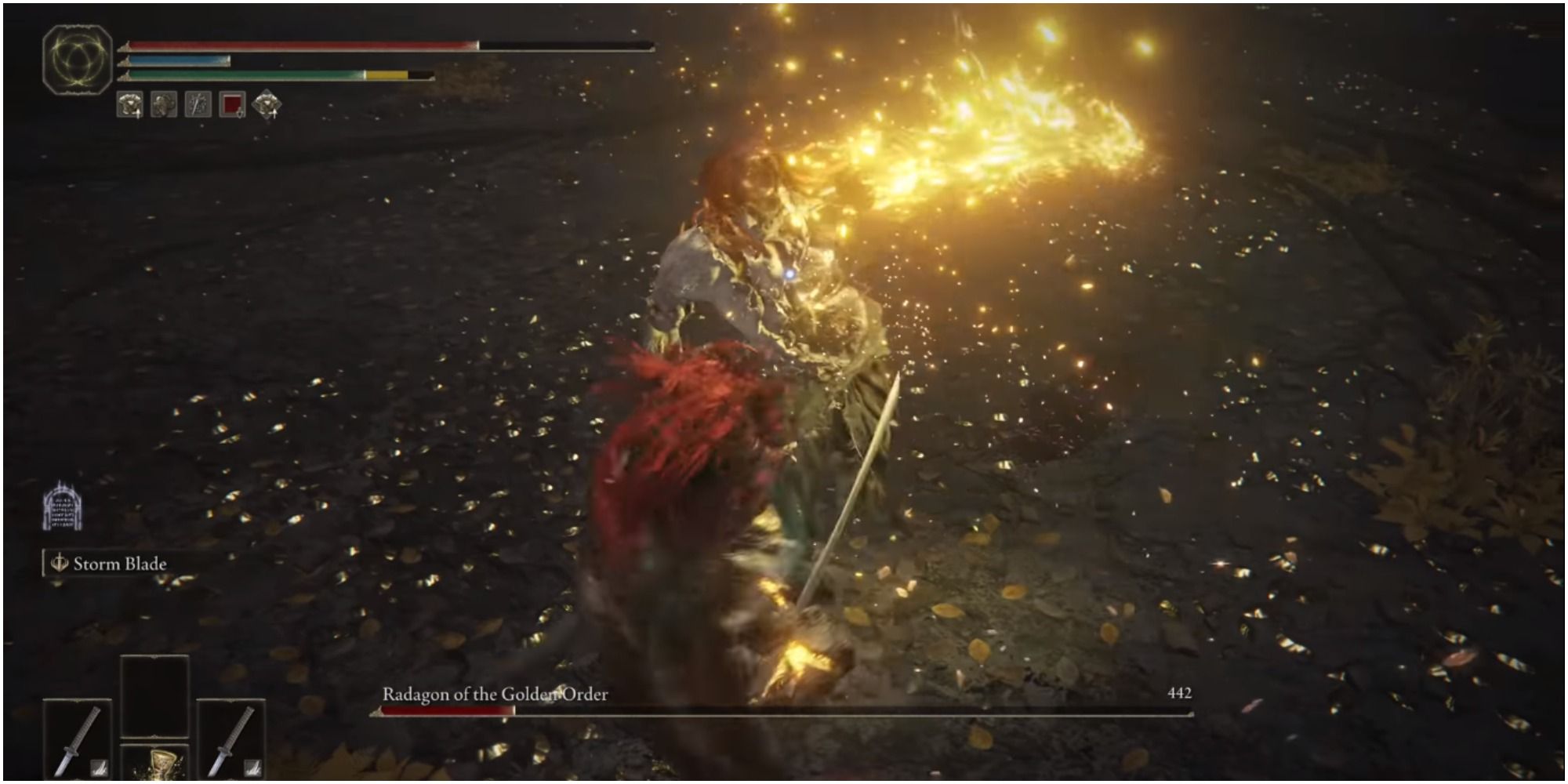 Radagon's left hand starts to glow yellow as he walks toward the player, trying to grab them. The grab deals heavy damage.

Counter: The attack has a long windup before the grab. Wait until the last moment to roll into the boss to avoid it. 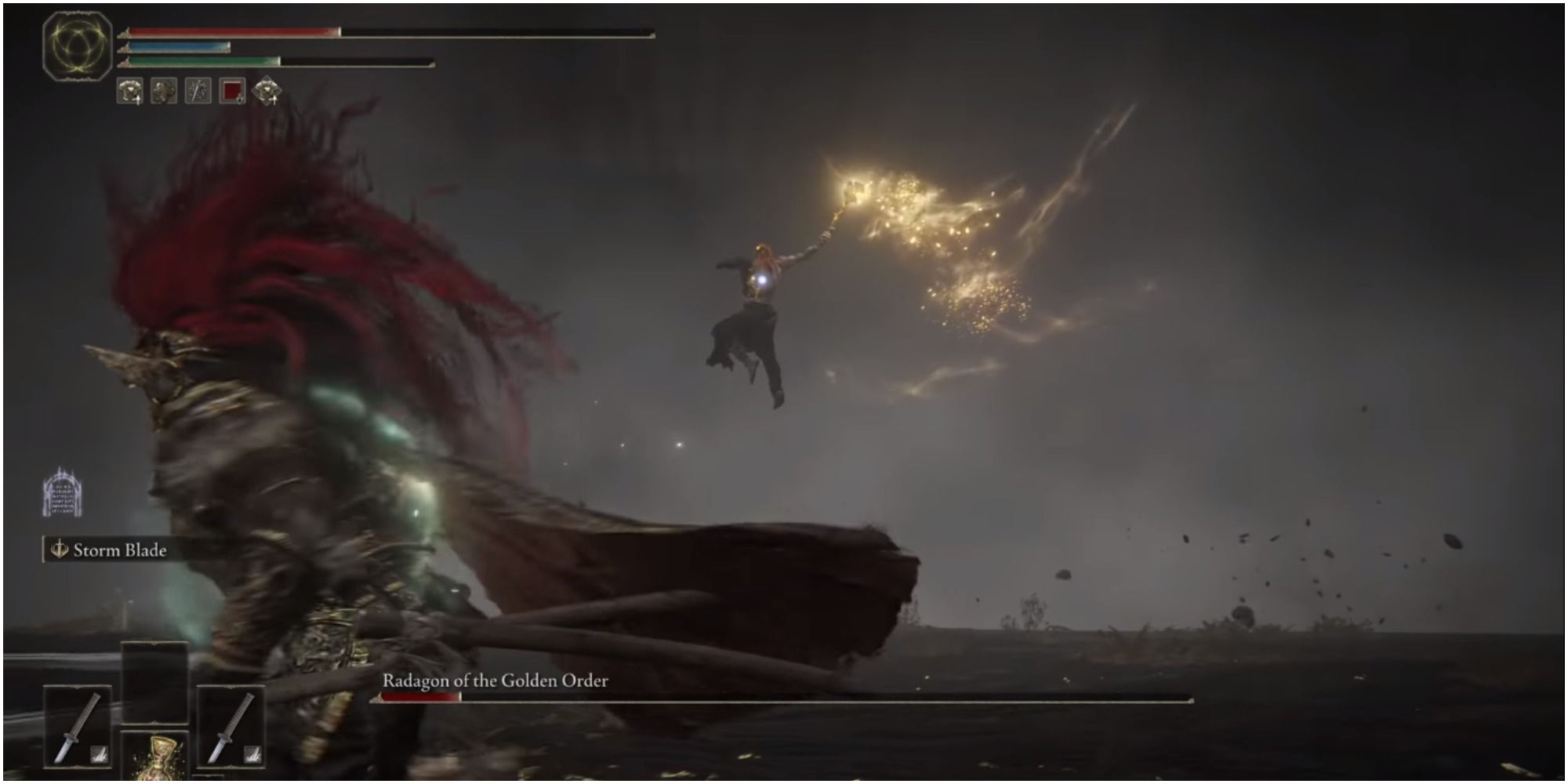 The boss leaps up in the air, his hammer starts glowing, and he slams it down on the ground. This creates an area that explodes after a few seconds.

Counter: You can either roll back or towards the boss as he comes down to slam the hammer.

Radagon leaps in the air and conjures a lightning bolt that he throws at you. The bolt has an AoE effect which explodes after a few seconds.

Counter: Dodge to the side and keep moving in the same direction until the explosion occurs. 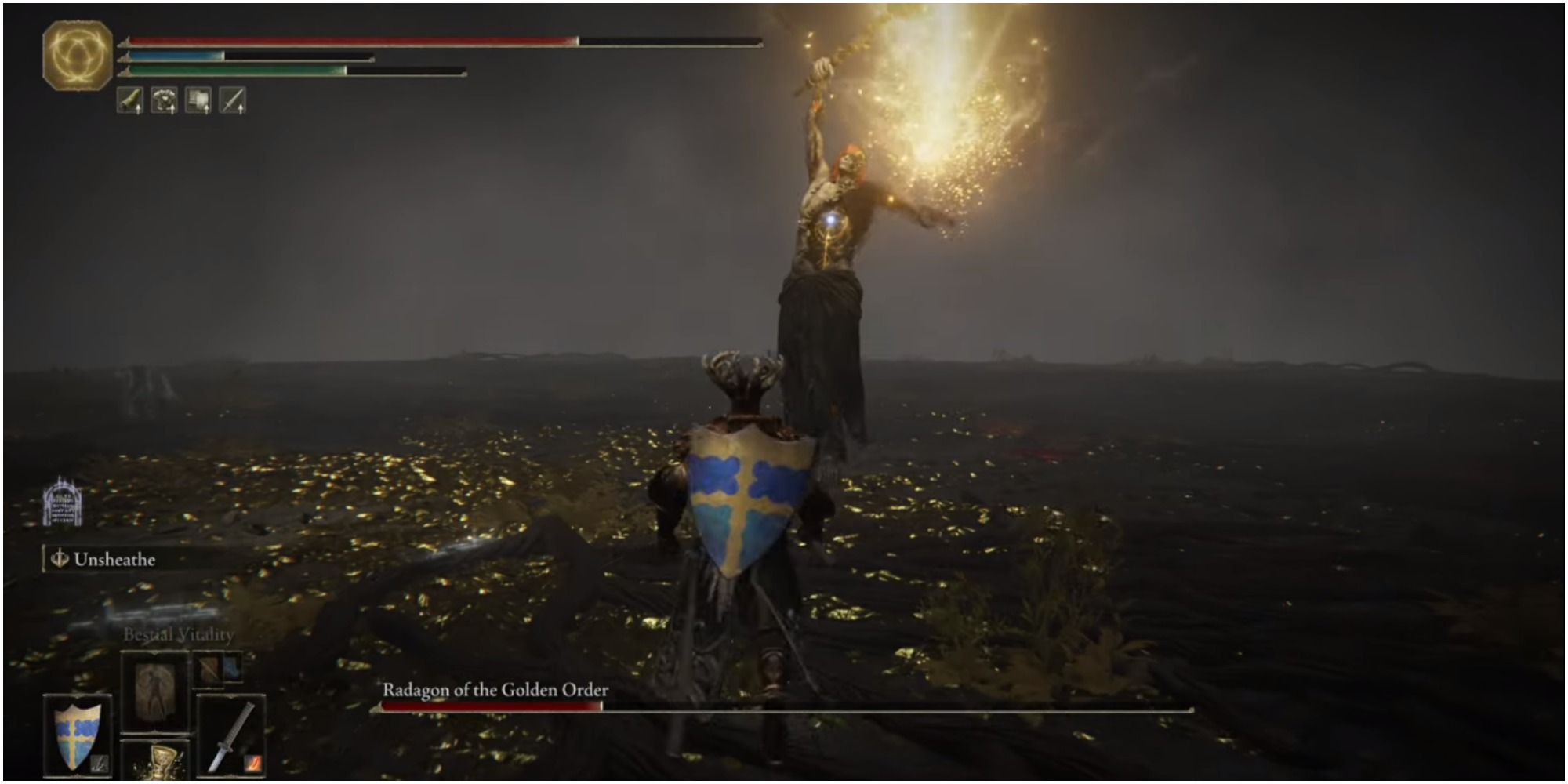 The boss charges his hammer and slams it down on the ground three times, each time with a delay. Even one hit will deal massive damage to the player.

Counter: As the boss is about to slam the ground, you need to roll into the boss and try to get behind him. You can do this for all three slams. Successfully dodging will allow you to get in a few hits after the second and third charged slams. 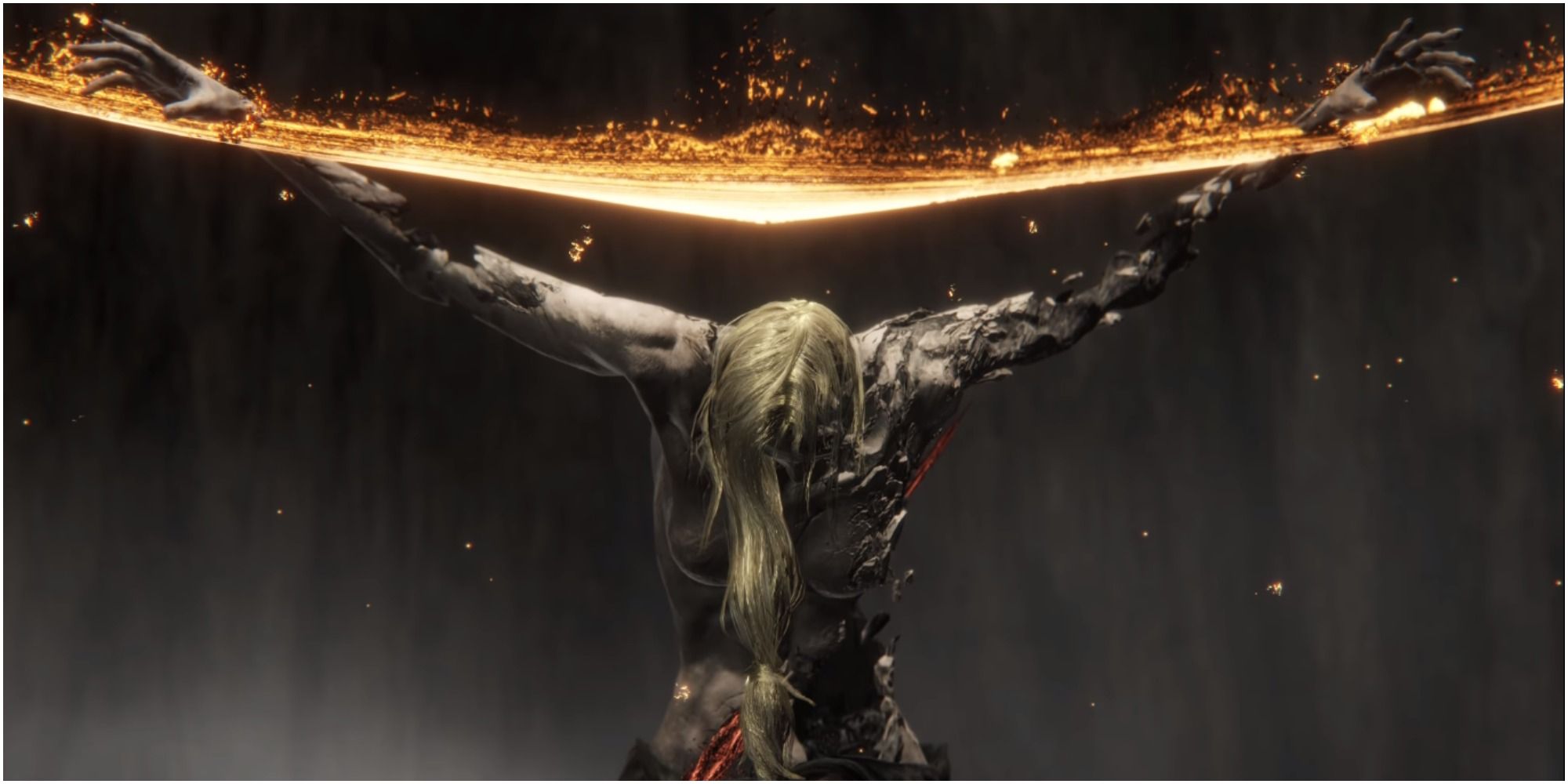 There are two main strategies for the fight: 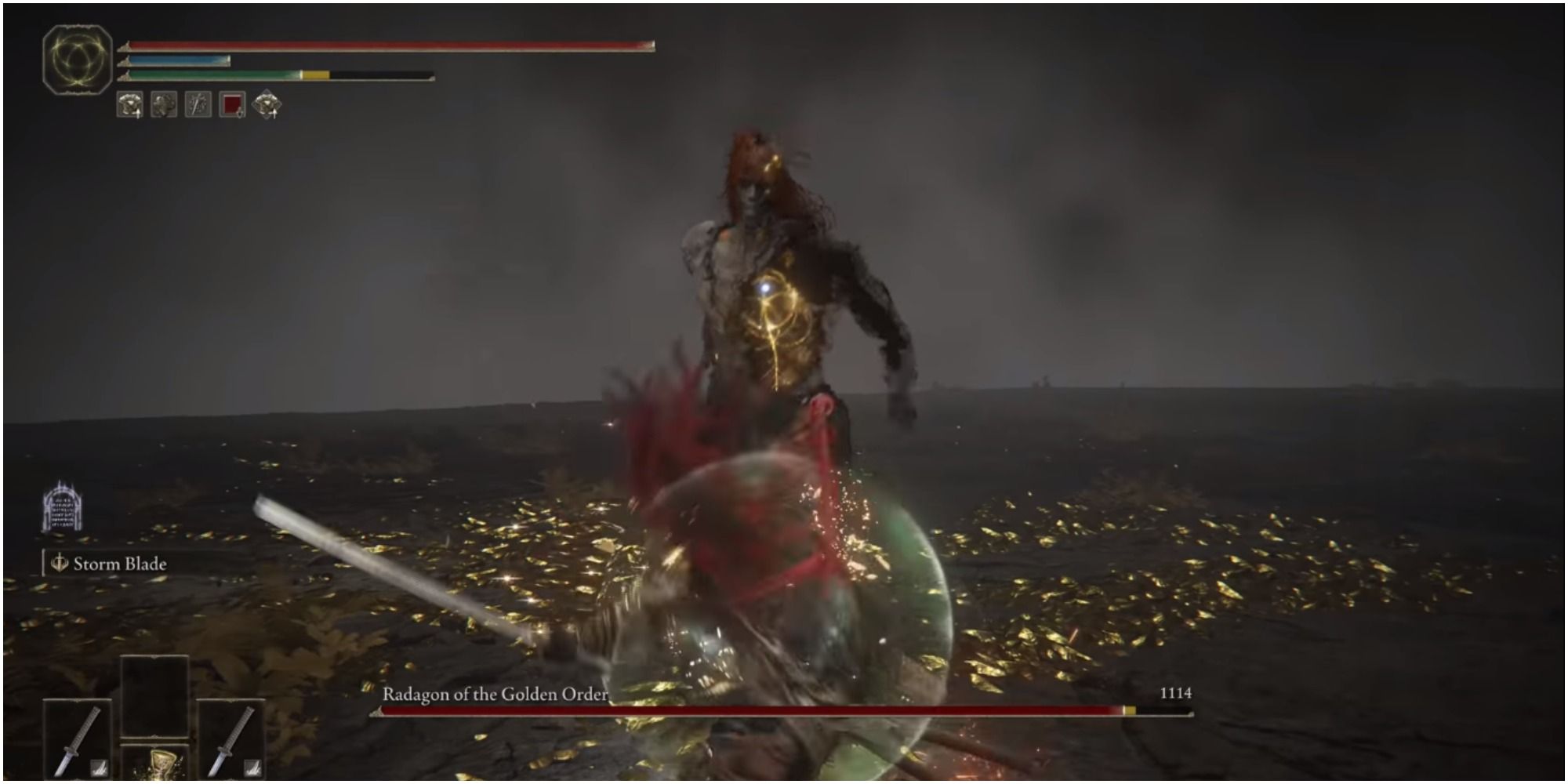 The melee strategy for Radagon is quite simple overall. Your main focus needs to be on staying close to the boss at all times. Almost all of the attacks the boss performs have delays, giving you enough time to counterattack if dodged successfully. Staying close also decreases the chances of the boss using Lightning Strikes or Leaping Strikes.

However, even though this strategy has its strengths, staying close can also be dangerous. Radagon is more likely to attempt his grab when you are close to him. This deals massive damage, but can be avoided with ease as the attack is quite slow.

As Radagon's attacks deal Holy damage, you should use the Lord's Divine Fortification (Incantation), which will increase damage negation. You can either receive it from Gideon Ofnir after defeating Malenia, or buy it from the Twin Maiden Husks in Roundtable Hold after defeating Sir Gideon Ofnir, the All-Knowing. As for weapons, any armament with serious Strike damage is a good choice for this fight. In addition, you can also use the Black Flame Blade Incantation. The boss has no resistance to Fire, so dealing percent-based damage to the boss is quite useful. 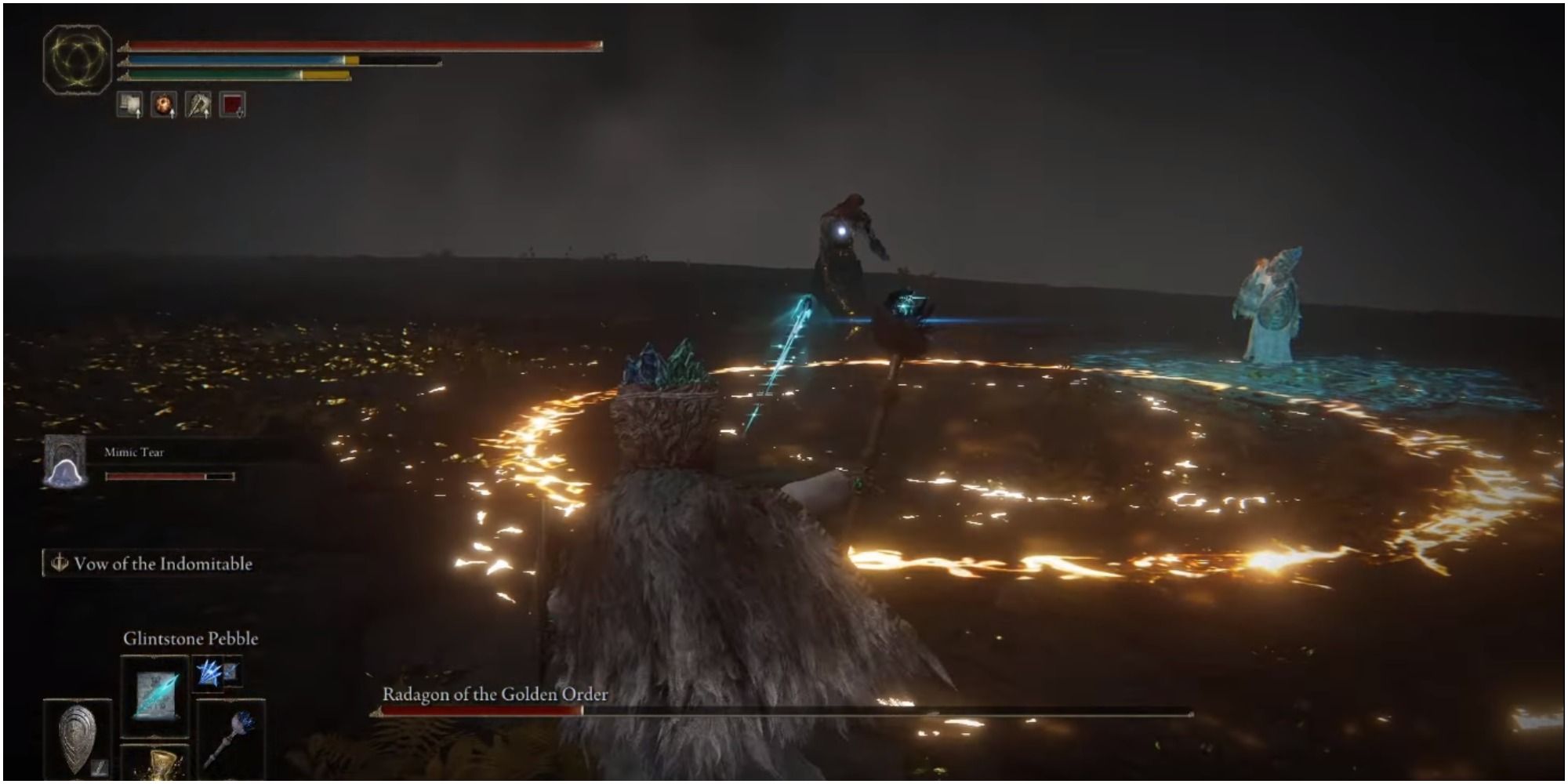 As for the ranged strategy, it's better to rely on a Spirit Ash to tank most of Radagon's attacks. In doing so, you will have enough time to deal damage to the boss from afar. If you don't want to use a slow, tanky Spirit Ash, opt for Black Knife Tiche. This summon is quite effective in this fight, as it can close the distance between itself and Radagon very quickly.

Try to bring Incantations such as Black Flame to exploit the Radagon's weakness to Fire. Dragonice is also another useful Incantation. Being at a distance from the boss makes you susceptible to damage from the boss's long-range attacks. He will use Lightning Arc and Lightning Spear more often to deal AoE damage. He can also use Dashing Strike to get close, so avoid this at all times. 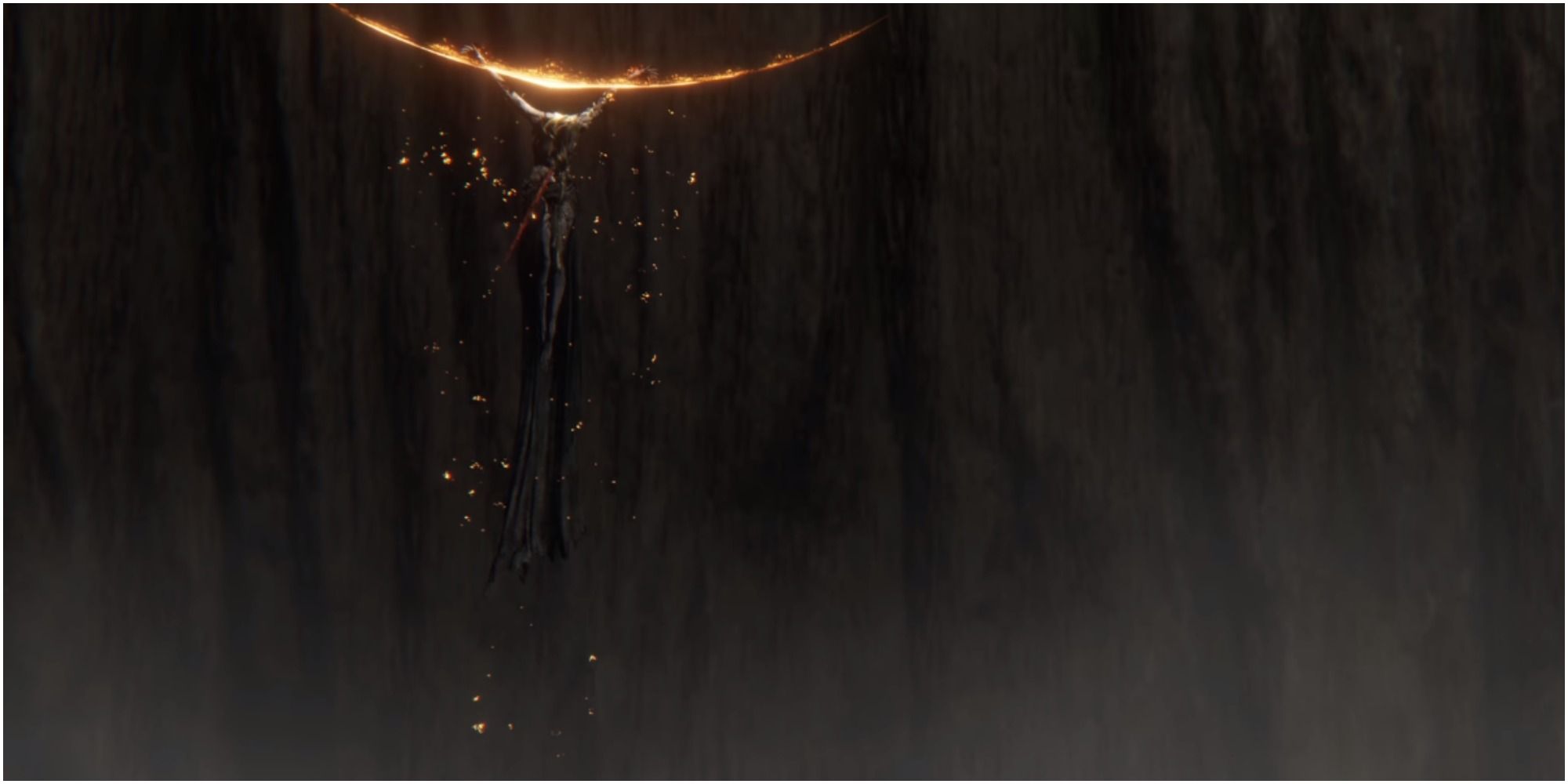