While Hero's Graves in Elden Ring are made to be the most challenging dungeons the game has to offer, Caelid caves take a close second. Sellia Hideaway is one of the more confusing dungeons you may find yourself lost in, with no way to get out.

The easiest way to find Sellia Hideaway is by fast traveling to Fort Faroth and heading East. With Torrent, you can find a safe spot to jump down the cliff South-East of the Grace. Sellia Hideaway is directly under this area, with Sorceress Sellen's side quest tied to this dungeon. 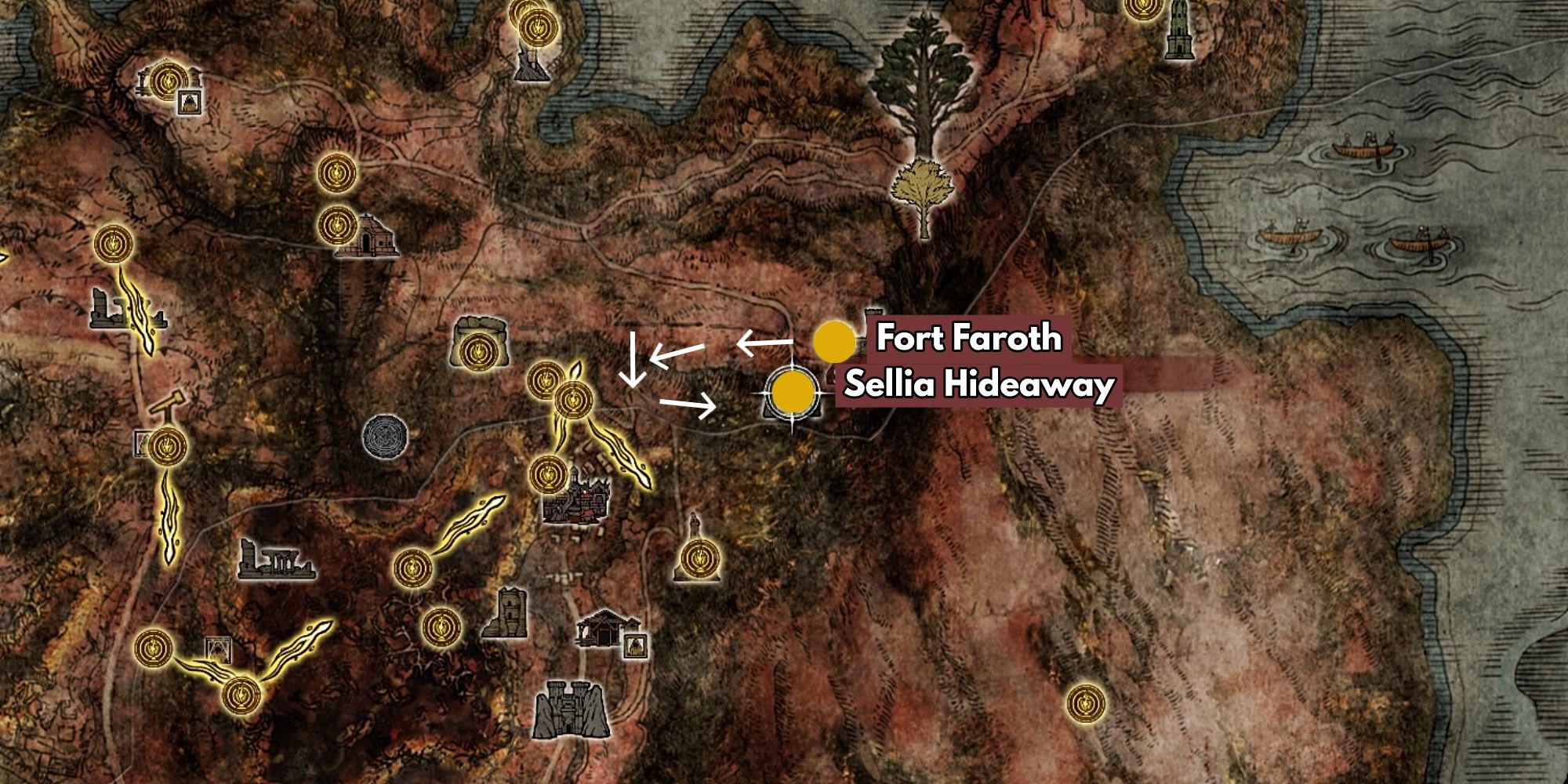 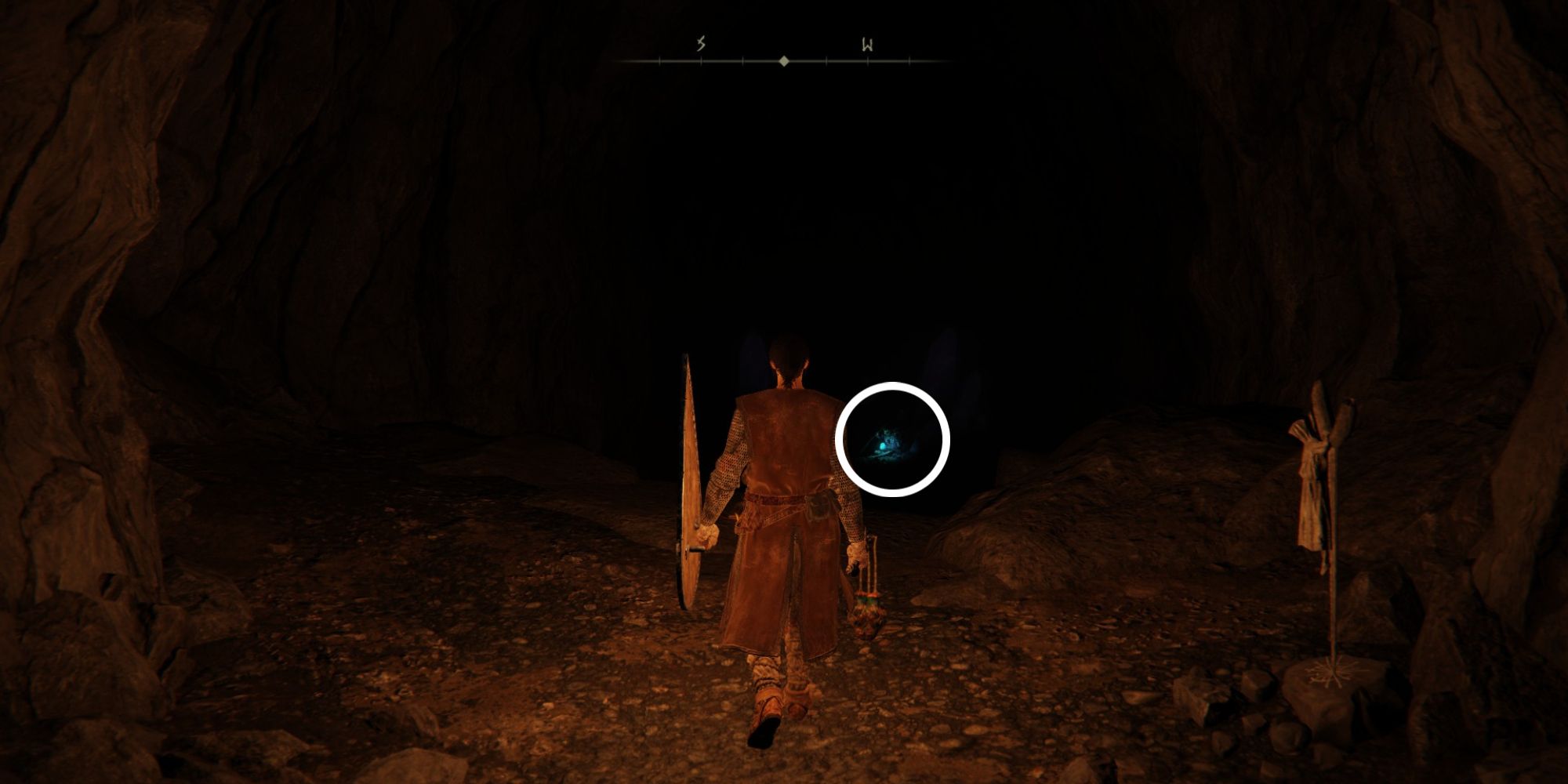 It's best to buy and equip a lantern for this cave.

There will be a crystal miner playing with a Glintstone ahead. Behind him is an illusionary wall to continue forward. 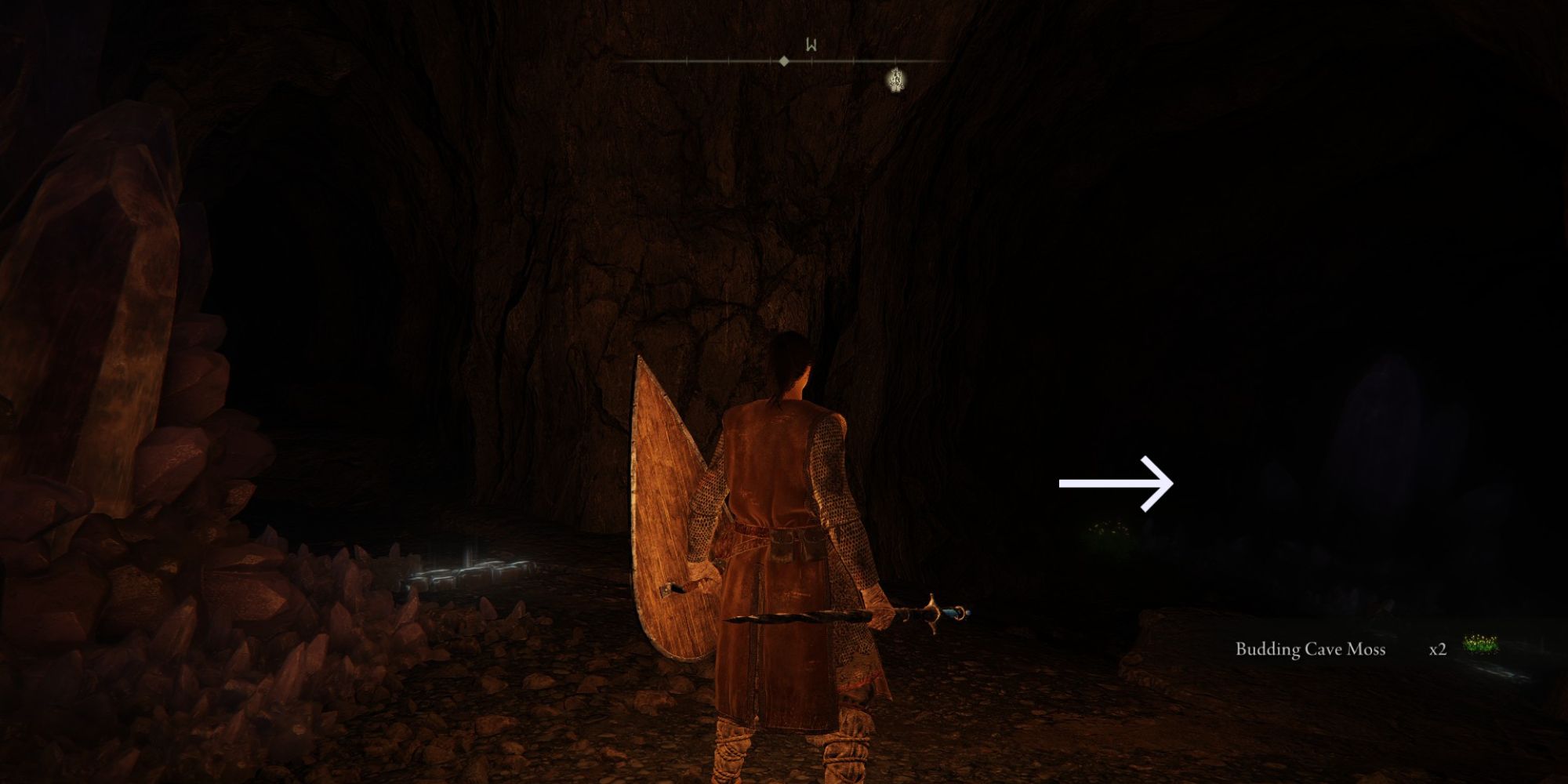 There is a short cave-in to your left that just has another crystal miner and some moss. Continue forward through an illusionary wall. 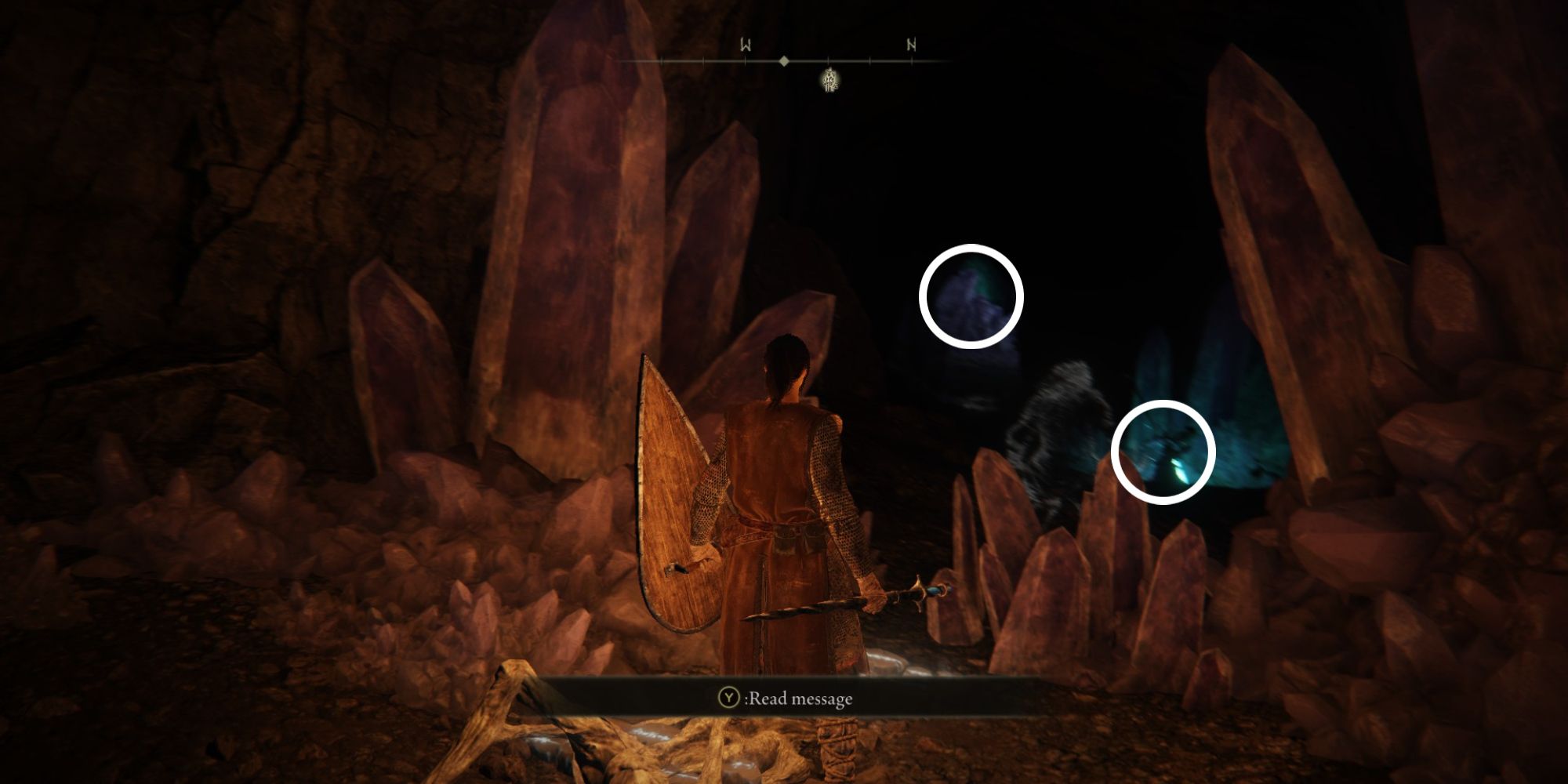 Behind the next crystal, miner is yet again another illusionary wall to enter the true dungeon. 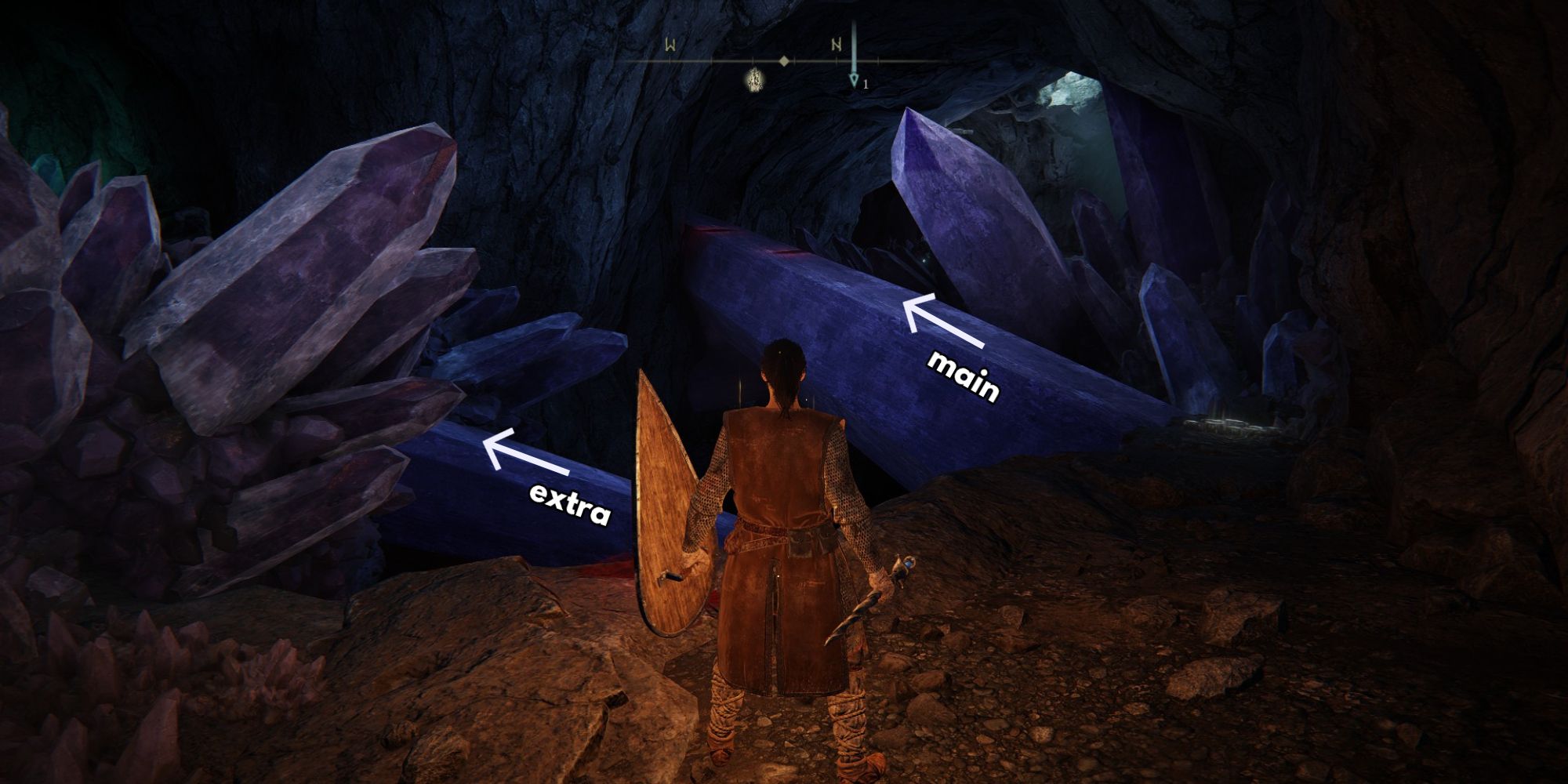 Here is where things get confusing. Look down into the depths below to notice a Revenant aggro at the bottom of the chasm. You'll bump into him later, though he is optional.

The lower crystal bridge leads to a short cave-in with a crystal miner and Golden Rune (5) to loot. You can get back by jumping over the smaller crystals to your right.

Walk along the larger, higher crystal in the middle. A sorcerer will start attacking you. These Glintstone attacks will easily triple stagger you if you let it. You don't want to fall into the abyss with the Revenant waiting.

Try to dodge into the sorcerer and avoid the magical attack, thus inflicting melee damage. As a mage, you can stay on the middle crystal bridge and hide behind the overhead crystal. 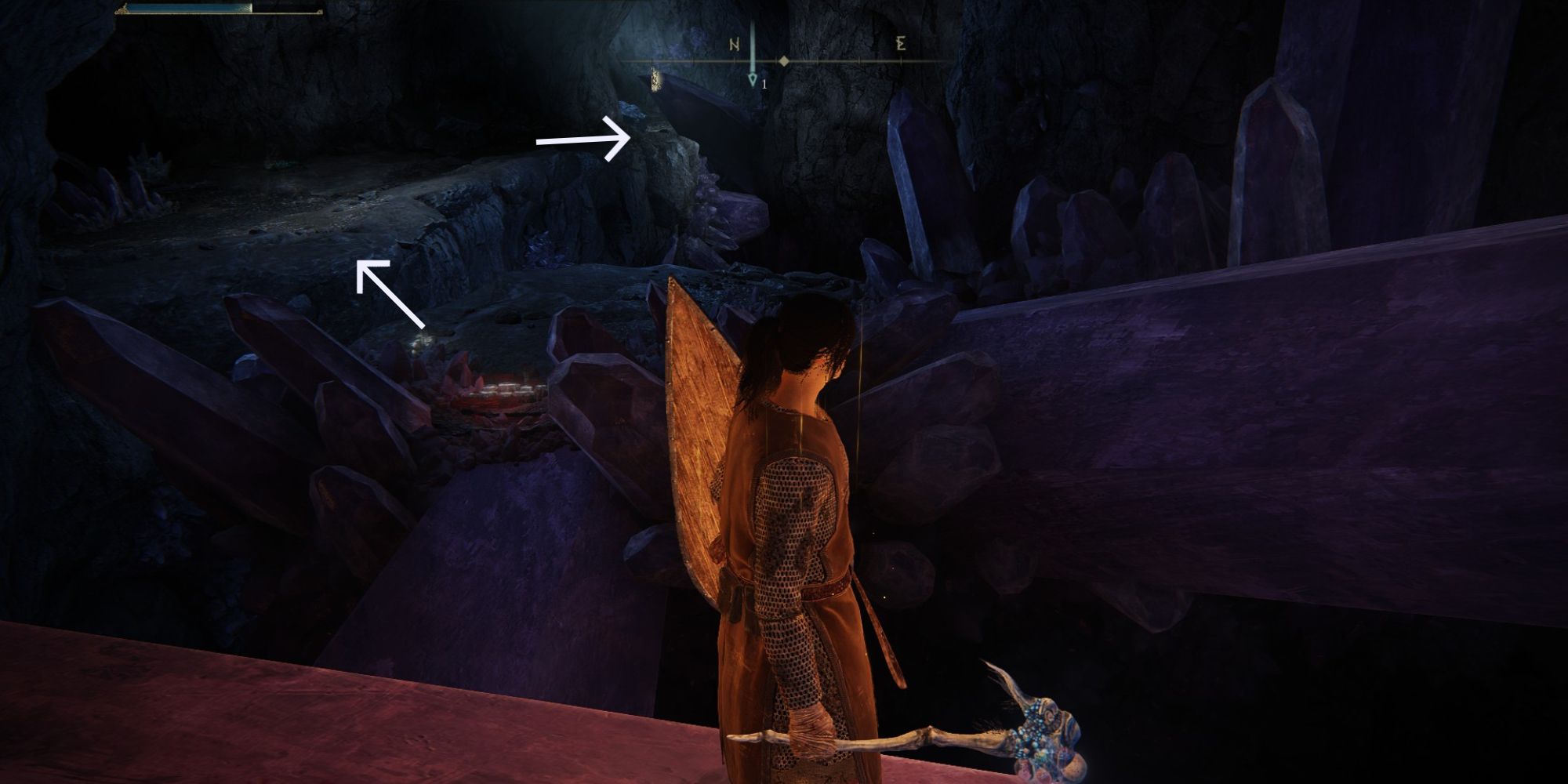 Next, you'll want to jump over the small gap to meet a snail with frost damage. Head off the side here, around the corner.

There will be two crystal miners sitting around this corner. 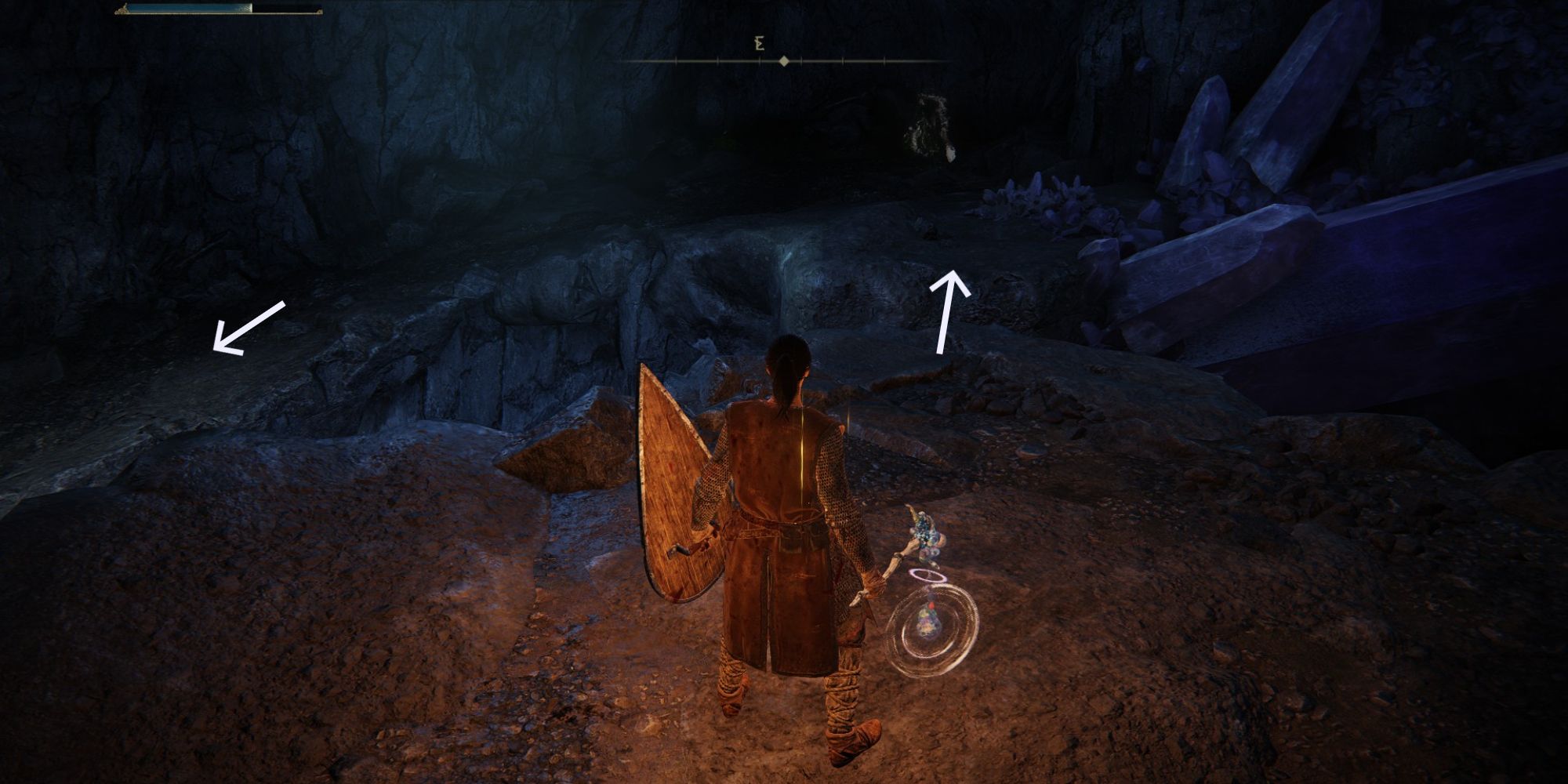 Jump over the next gap and down the ramp. 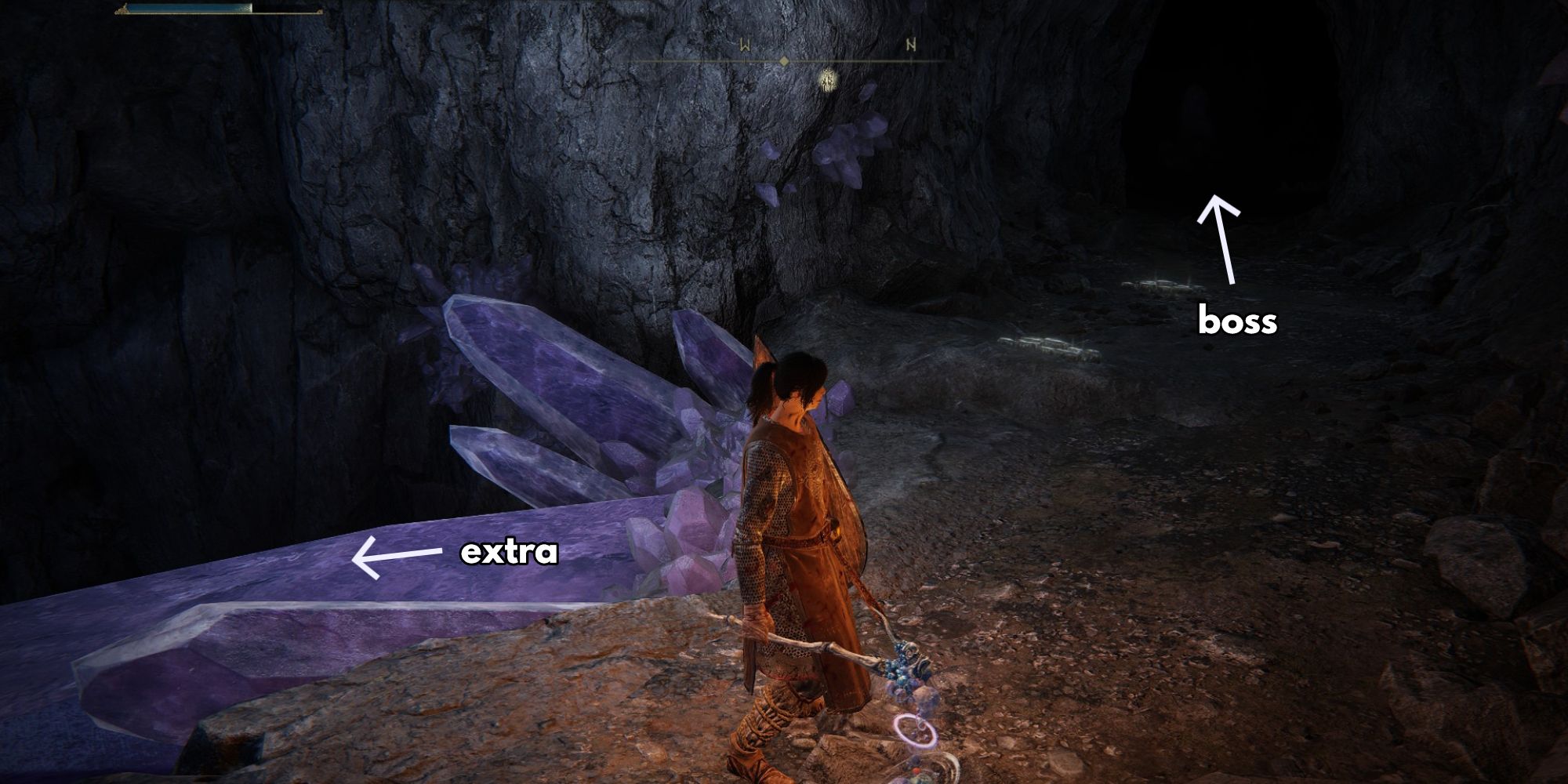 Ahead is the road towards the boss, so you may want to head left first to get all you can, including progression in Sorceress Sellen's quest. 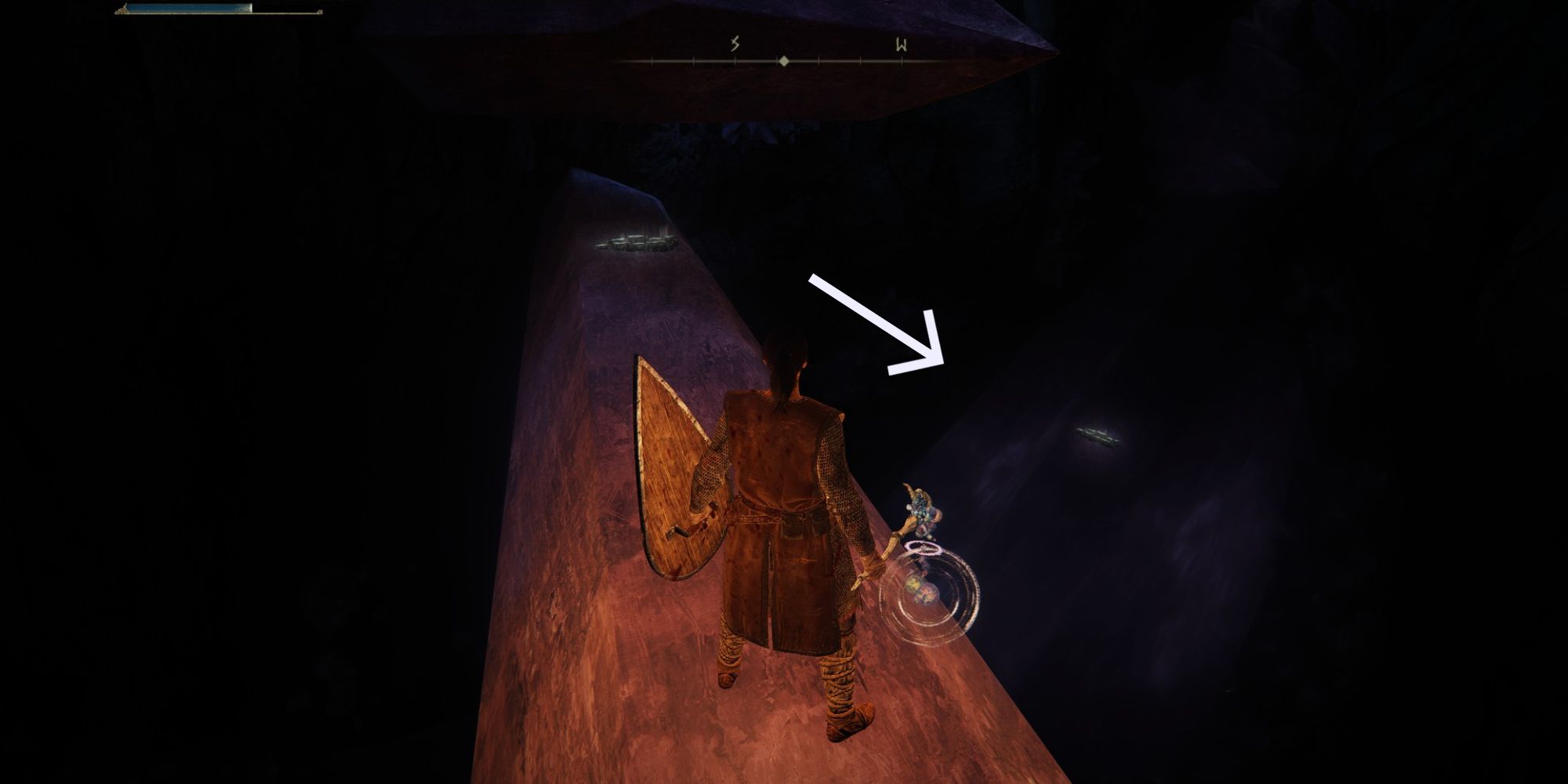 Jump down onto the large crystal below. 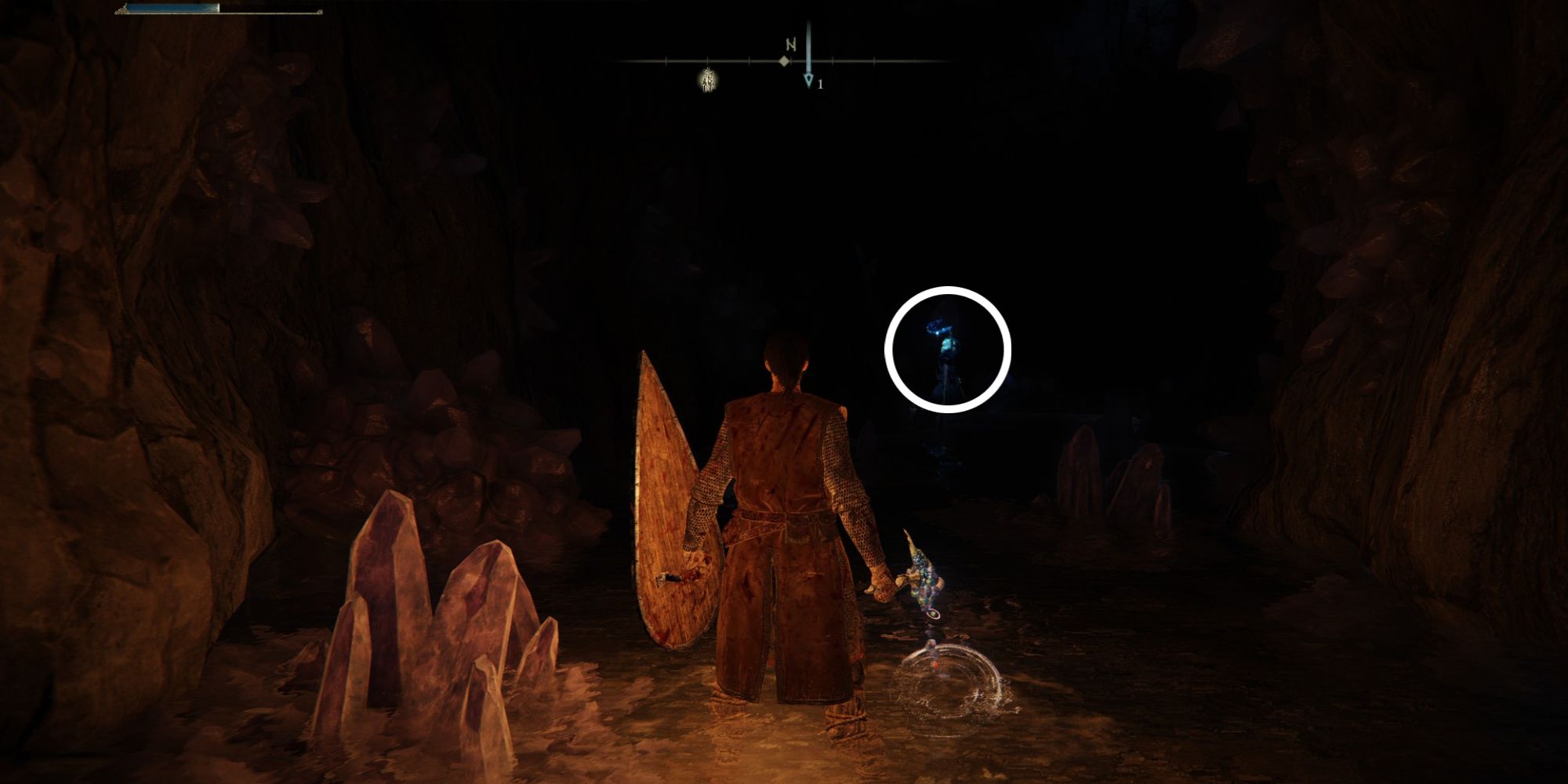 Head North and a scholar mage in the distance will start attacking you. Behind this mage is an illusionary wall that leads to a small cave-in where Master Lusat will lay for Sorceress Sellen's quest. Interact with him to receive the spell Stars of Ruin. 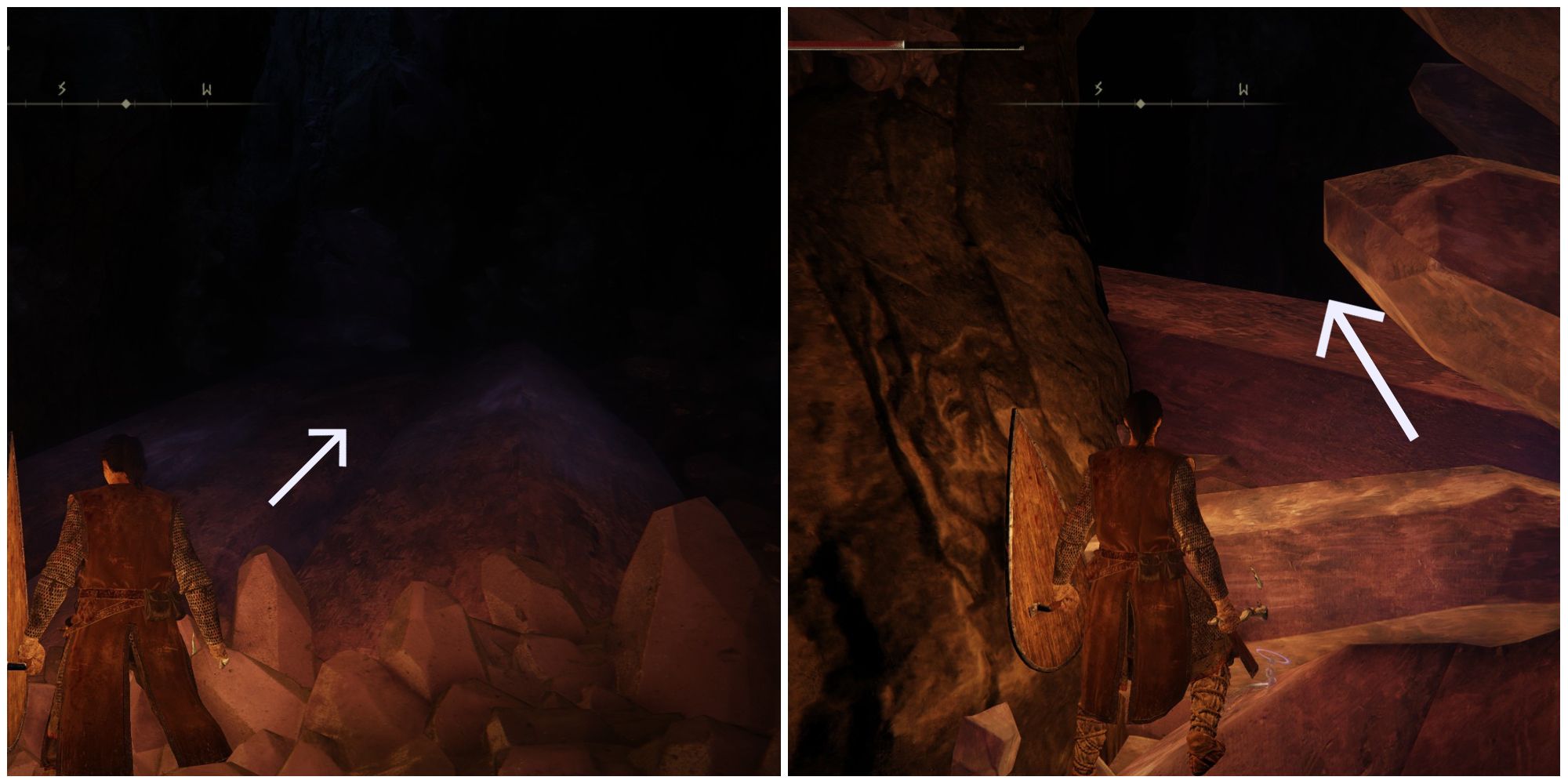 To leave this area, head back to that large crystal you dropped down onto. Walk up to it and over the smaller crystals. Be wary, this next area is where the Revenant is. 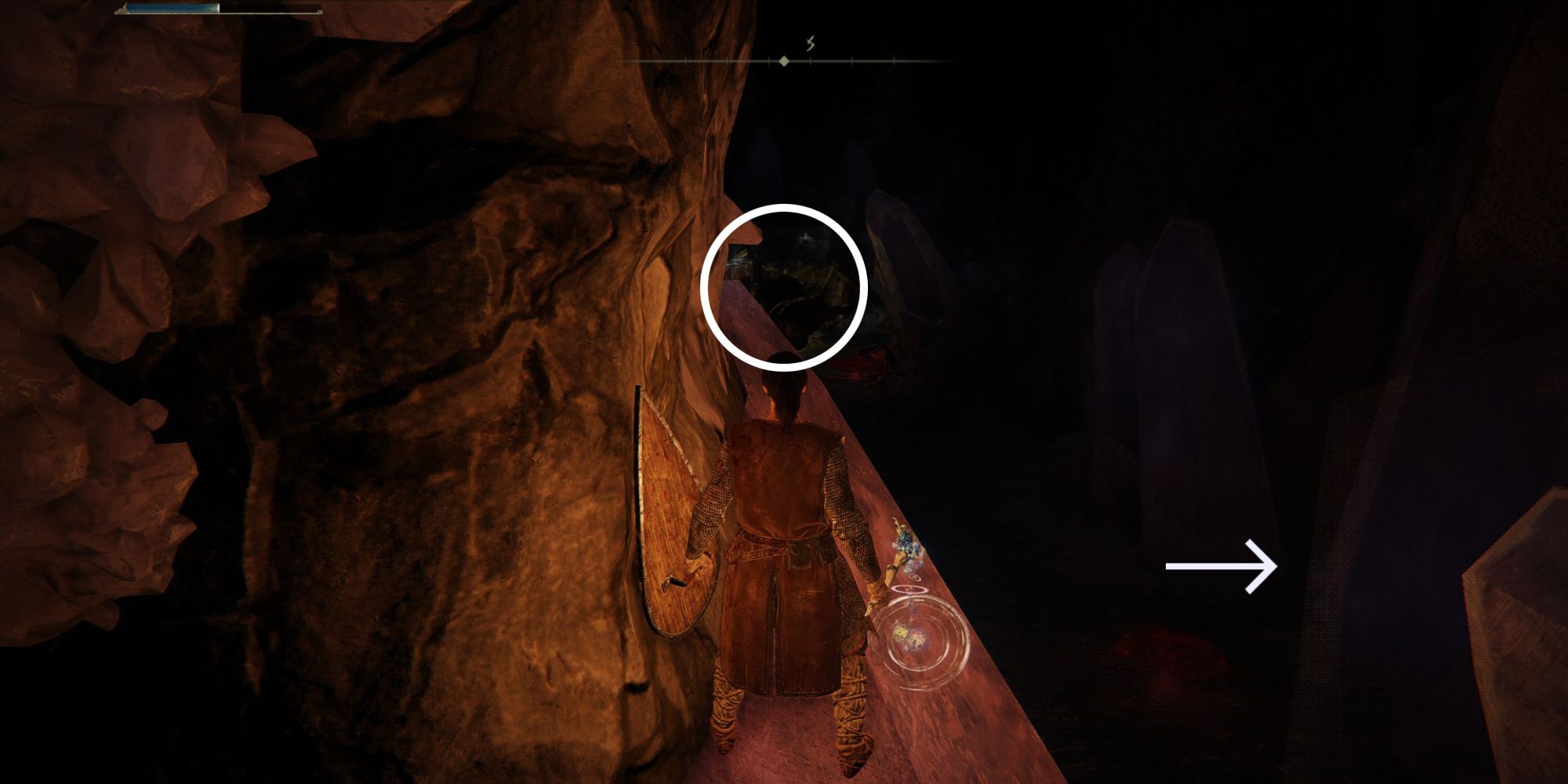 From the crystals here, you can safely range attack the Revenant without getting hit. If you fall off, there's no going back up to its safety. In the Revenant's den, you can loot Stimulating Boluses, Lost Ashes of War, and Golden Rune (5). 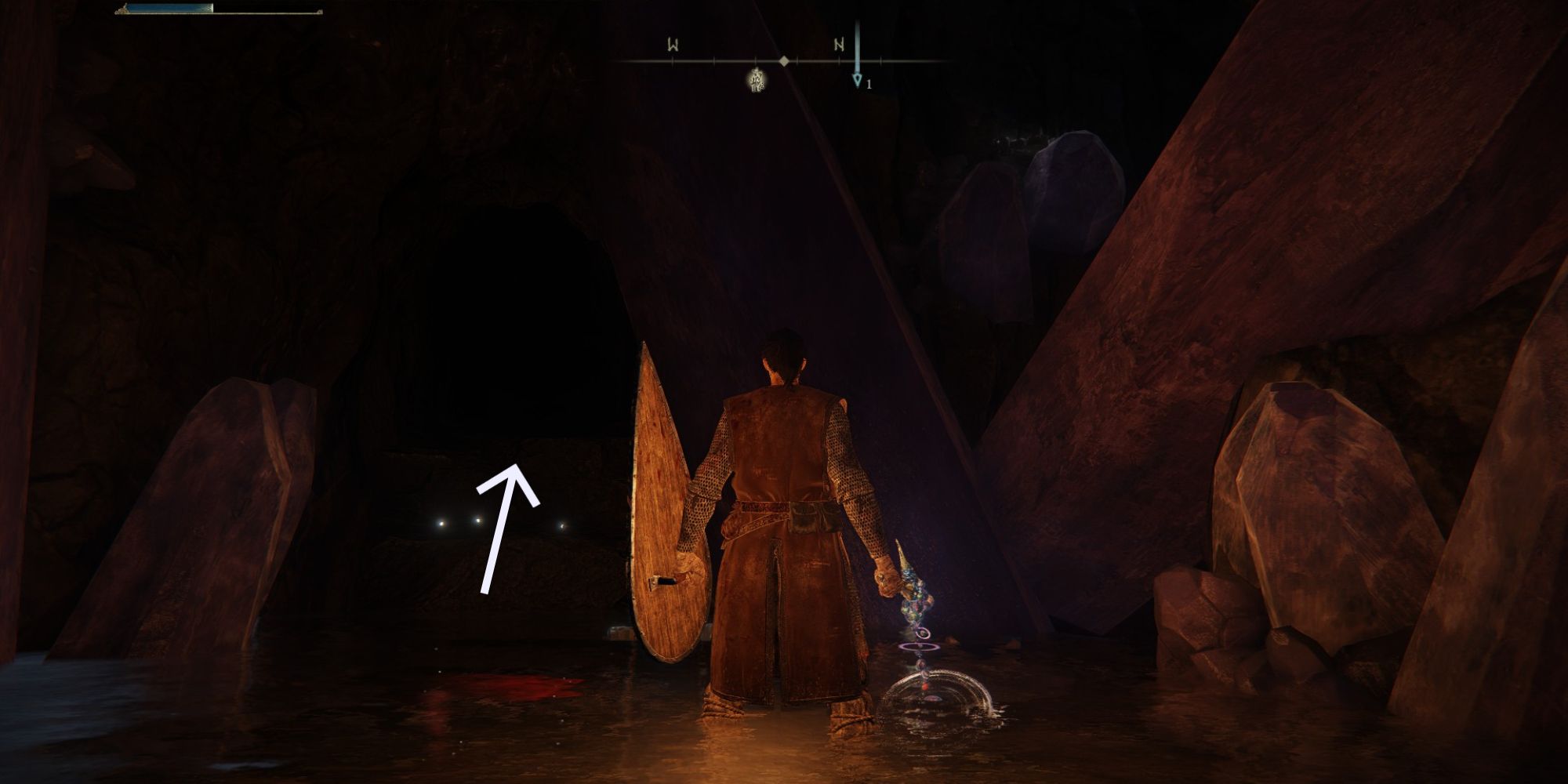 You can completely avoid this enemy by jumping down and taking a swift right, up the stone steps. He can't reach you through here. On a corpse can be found Somber Smithing Stone (4). 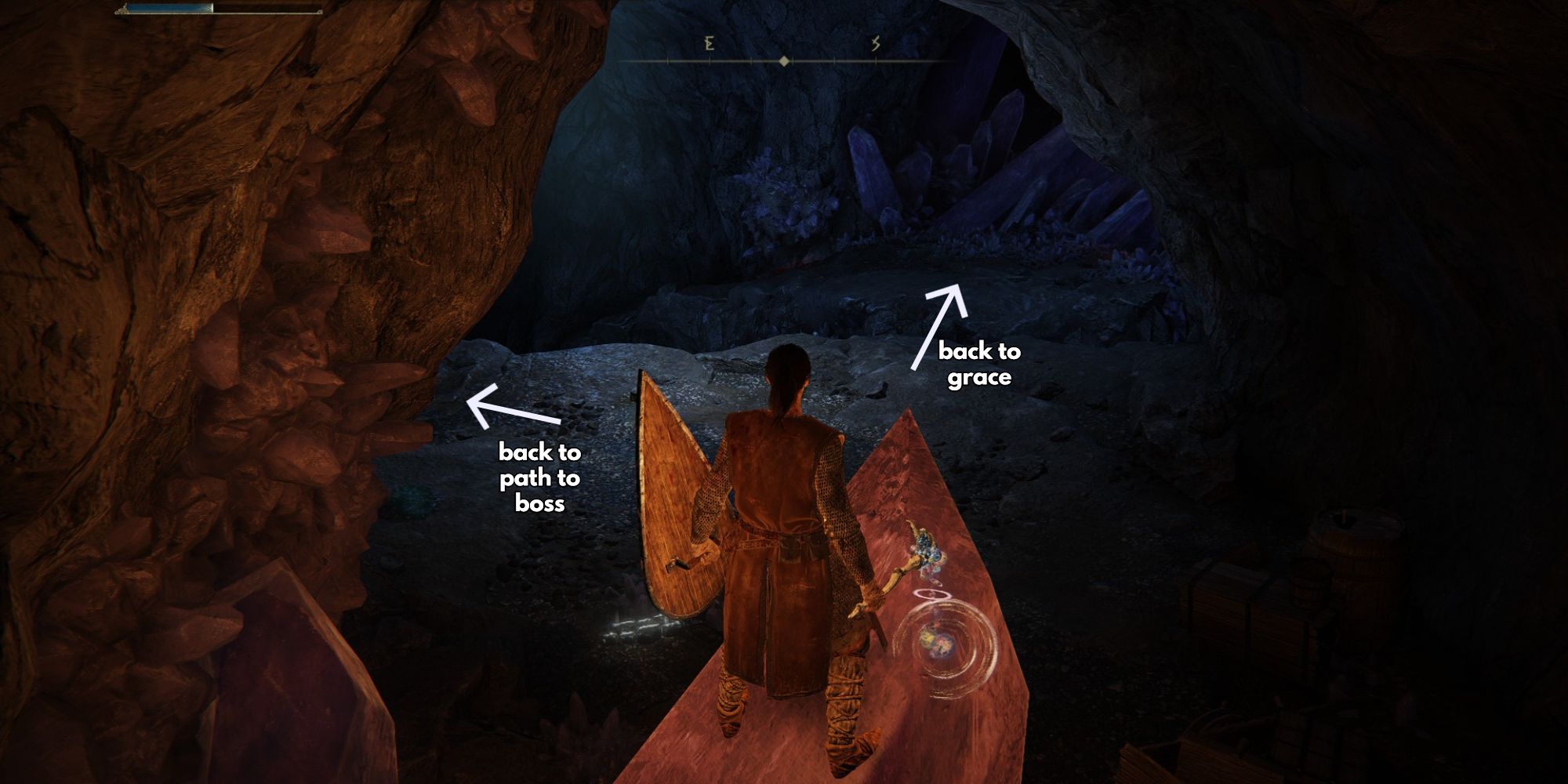 This tunnel will lead you back to the previous location. Head left, back toward the crystal bridge, and tunnel to the boss. Walk through the next tunnel. 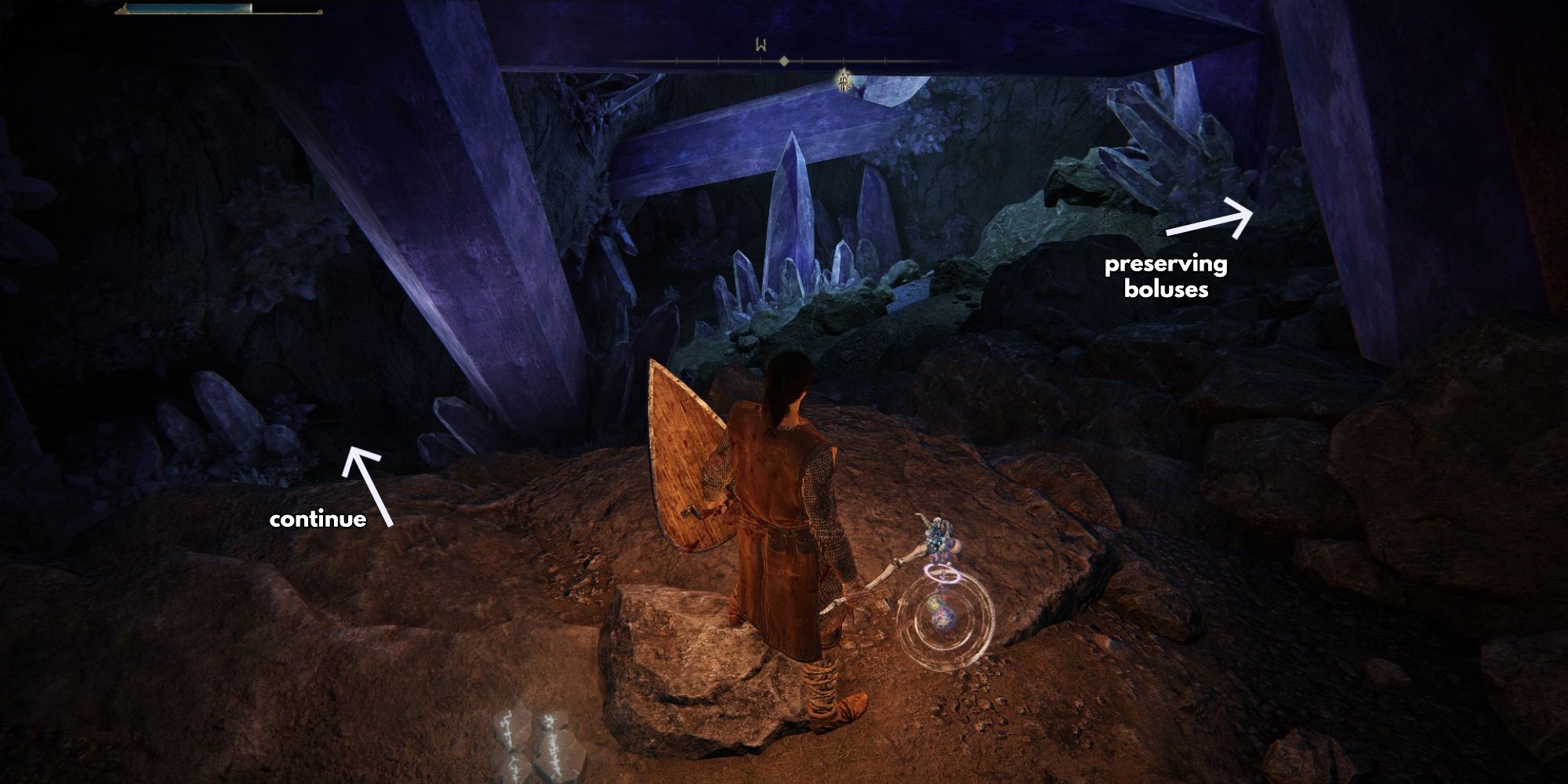 The tunnel will take you to a mound of rock and crystal. You can simply walk down and enter the next tunnel to the left, where you'll find the boss fog wall. There is secret loot around this room, though.

At the very bottom, instead of going through to the next area you can turn around and walk to the back of the room to find Crystal Dart on a corpse.

Expand the menu below to see how to get the hidden loot in this room, otherwise, proceed to the boss. 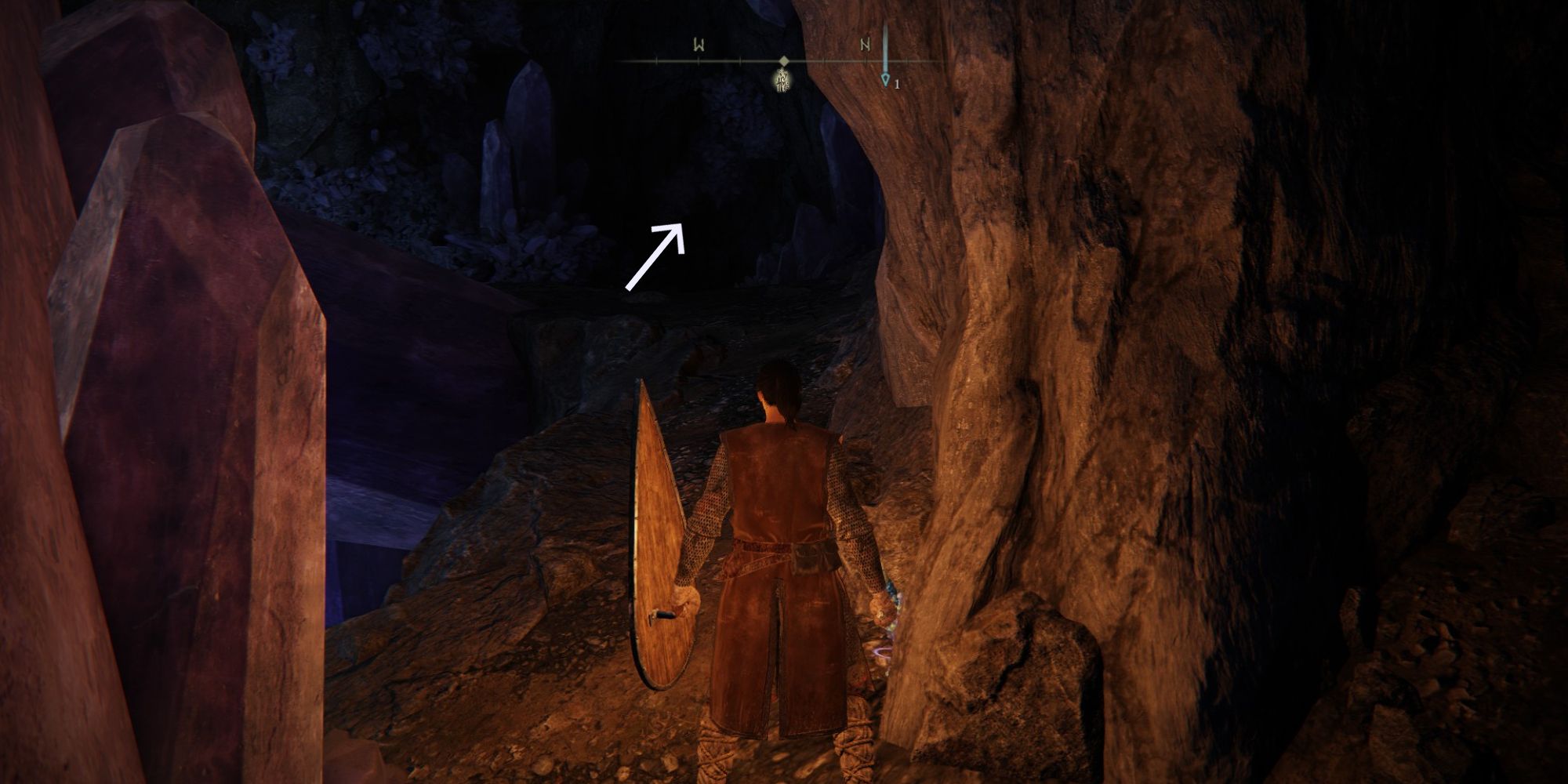 From where you start at the top of this hill, go down and to the right where you'll see a visible path. There will be Preserving Boluses to loot from a corpse. Just behind this corpse is an illusionary wall that leads to a treasure chest containing a Crystal Spear. 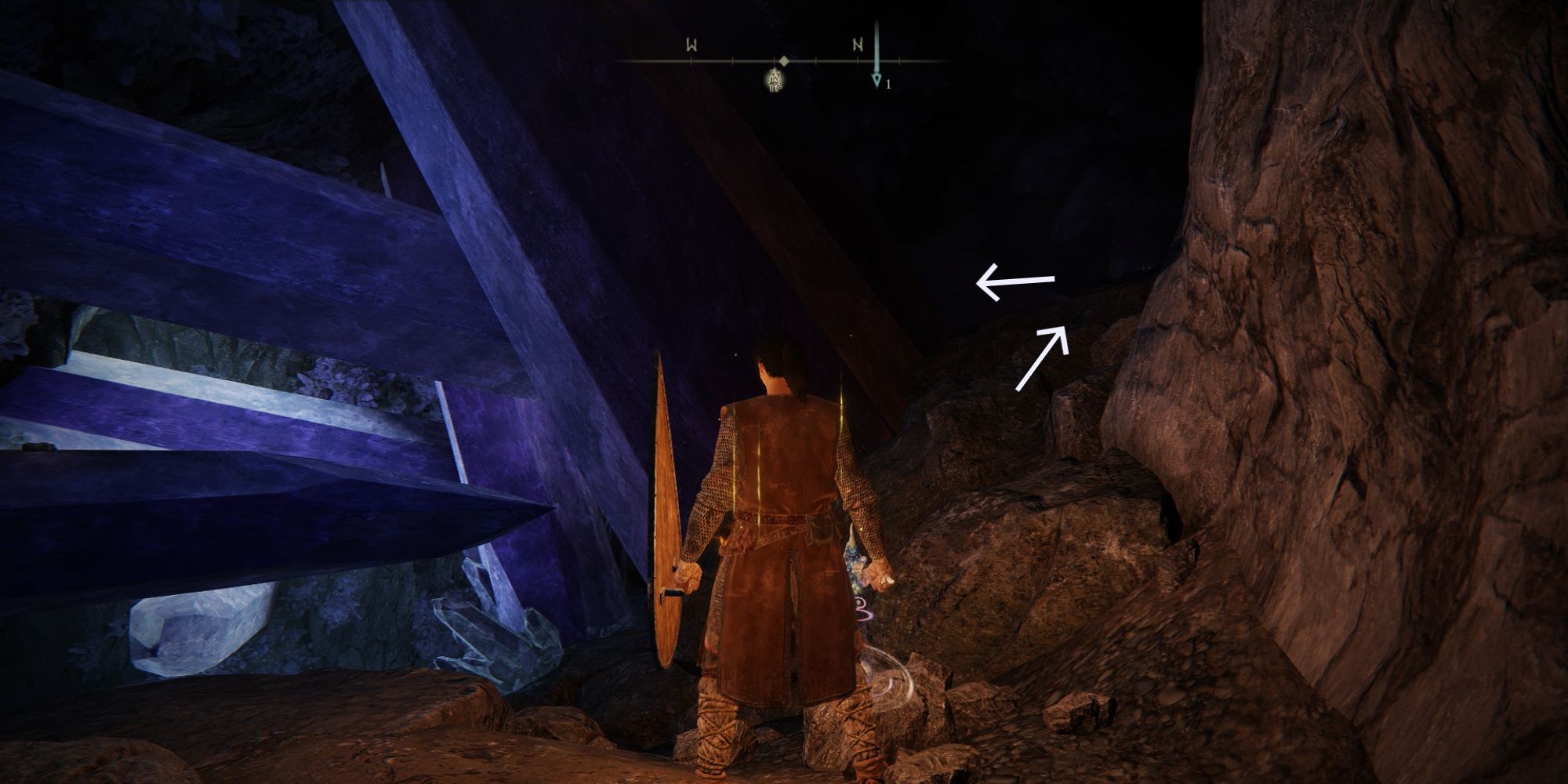 Next, head back to the top of the hill. Hug the right wall and jump onto the crystal bridge. Walk across it. 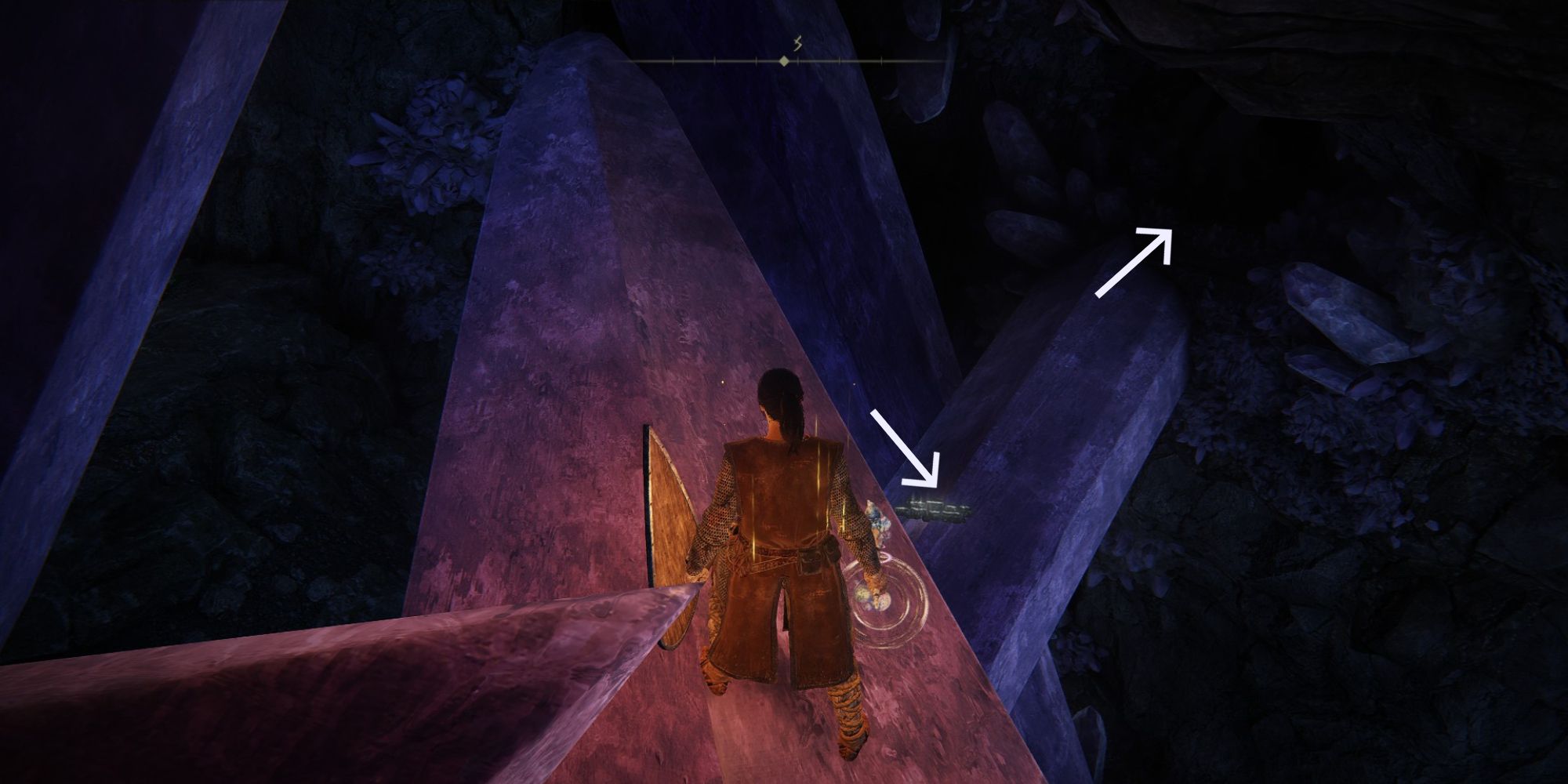 Jump down onto the lower crystal bridge to your right. There is a tunnel entrance at the end of this crystal that is hard to see because it's so dark. 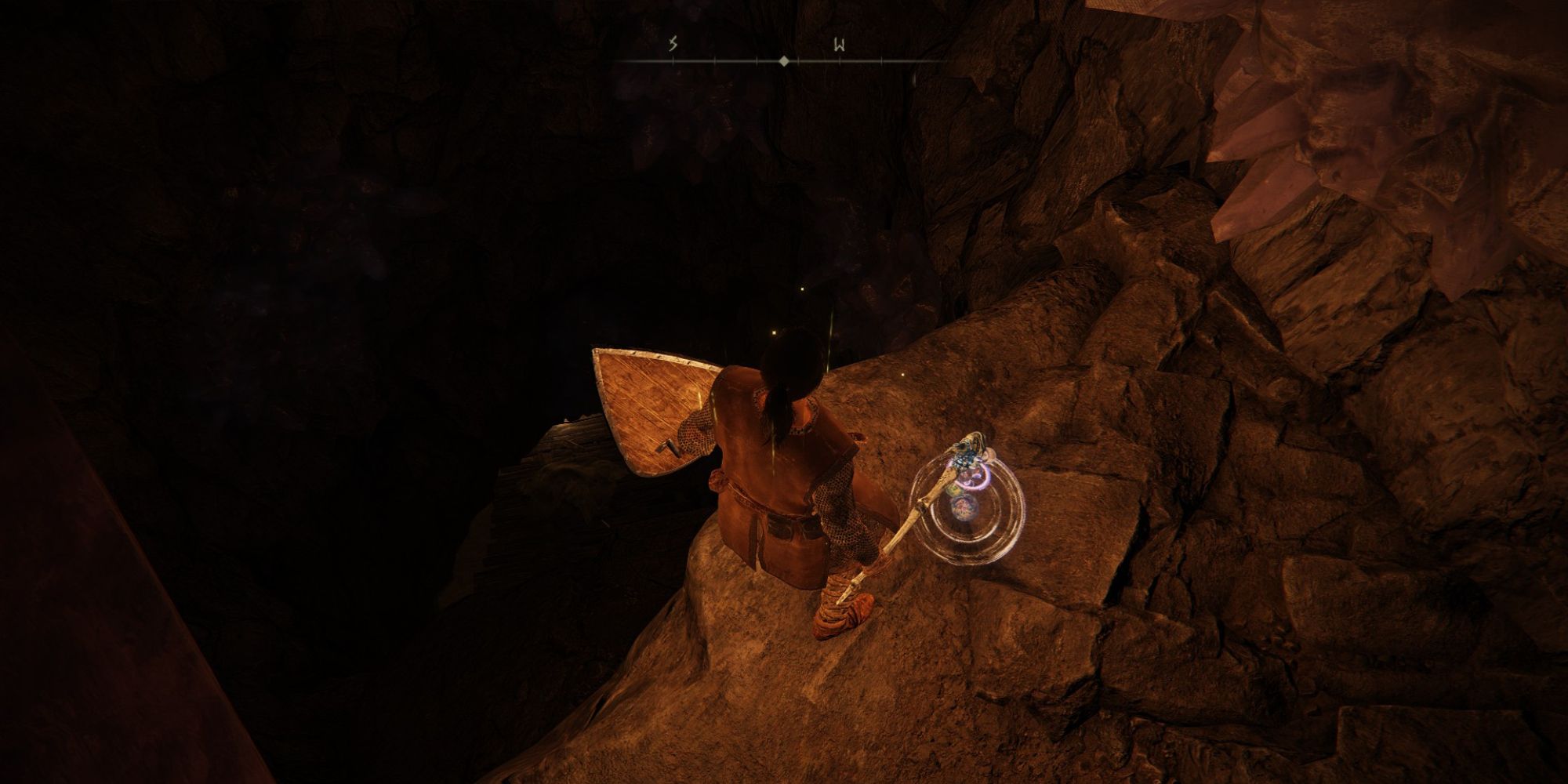 Carefully jump down the ledge onto another. 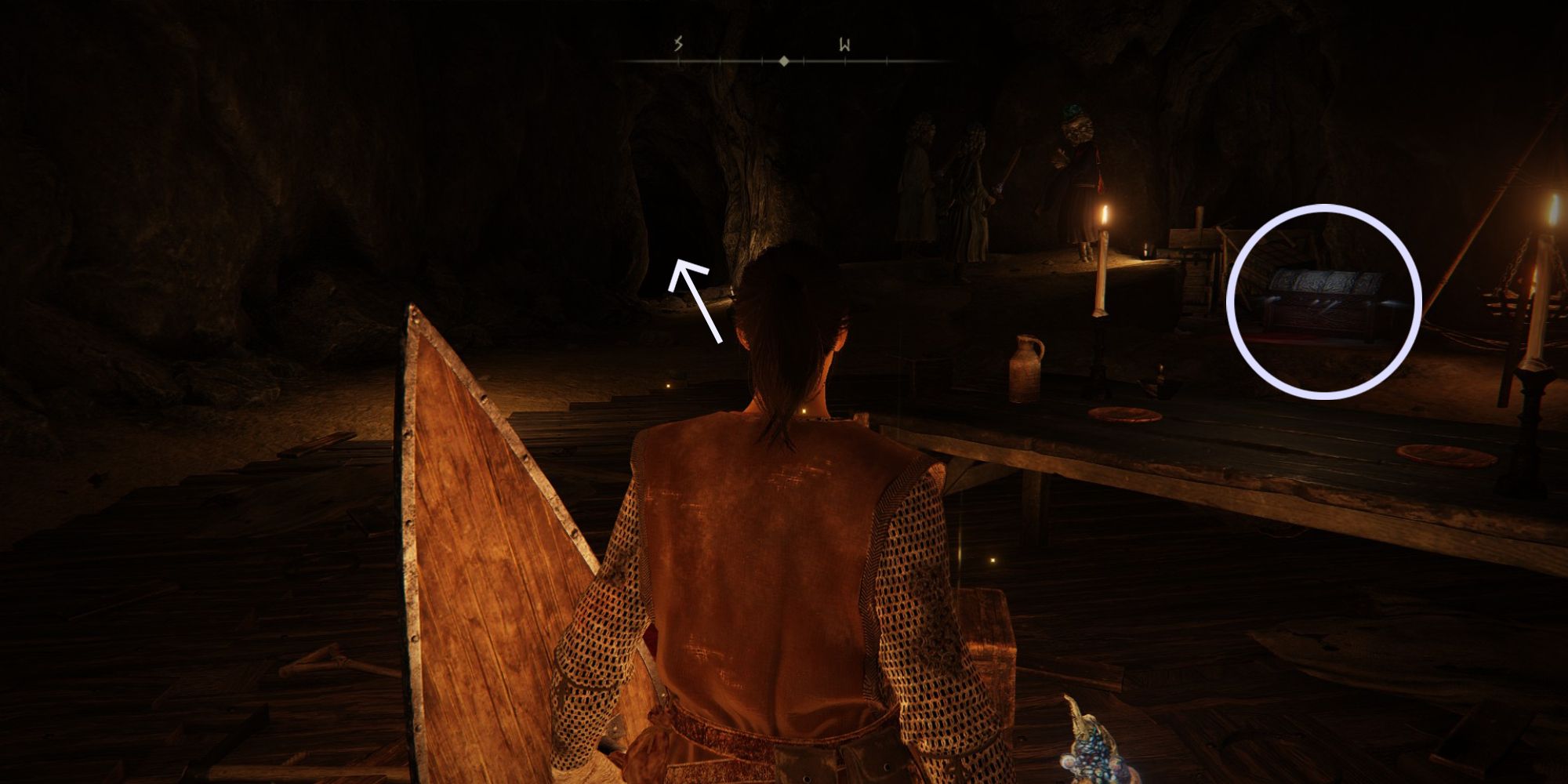 In this room will be two scholar mages, much like those from Raya Lucaria Academy. The treasure chest in this room will contain Crystalian Spirit Ashes. From where you drop, you will not be seen unless you run up to them or attack them, allowing you to sneak.

Just out the next tunnel, you will drop down and return to the original path to the boss. 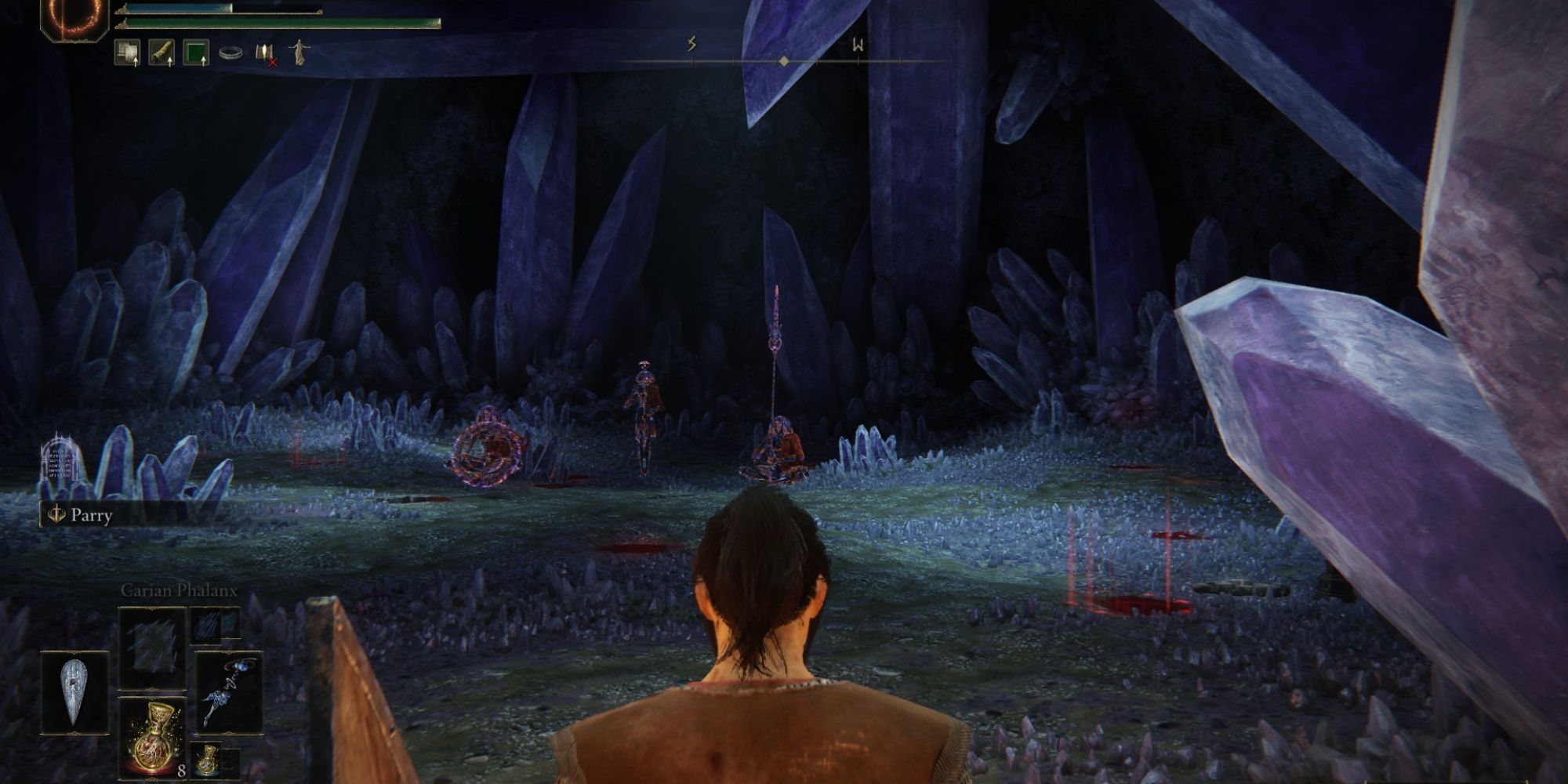 One or two Crystalian bosses is bad as it is. Three at a time is plain cruel. If you thought using summons was cheating now, think again. It's only fair to even out the odds by giving yourself a helping hand.

An important thing to note is that if you get hit enough by these bosses, you will get instant Scarlet Rot build-up. It's no good trying to survive three tough enemies while your health deteriorates on its own. These are some items that relieve the Scarlet Rot Status Effect:

The first thing you want to do is summon Spirit Ashes or other players. If you rather do the bulk of the fight yourself, use a Spirit Ash that will distract two of the Crystalians, so you can focus on the Ringblade.

Summon the Spirit and roll away, allowing the Spirit to make the first attack instead of you. The Crystalians will aggro onto your summon. With ranged damage or by simply grabbing its attention, lure one away at a time.

As a mage, Rock Sling will break a Crystalians poise very well and is a useful sorcery to spam here.

As a melee user, you should have an easy time dealing damage granted you're using large, blunt weapons over something like a katana.

Crystalians have a coat of armor. Once their poise is first broken, and you've dealt enough damage, the armor weakens and breaks. Once their armor is broken, you will deal more damage to them. The main way to survive this fight is by having summons distract them while you deal with one Crystalian at a time.