You will not be alone in not knowing what Whiplash is, or even in wondering what Square Enix has to do with Damien Chazelle's dramatic exploration of the perils of pushing artistic excellence to the brink. Before Whiplash was a movie about a drummer, it was a fantastic little platformer about a rabbit and a weasel who were chained together. You controlled the weasel, and could jerk the chain to hurl the rabbit at people. Bunny, choke, weasel, jerk… there's a sex joke in there somewhere. I'm really more of a big picture person though, so all I can do is point out the puzzle pieces. I hope whatever joke you managed to tell was hilarious. 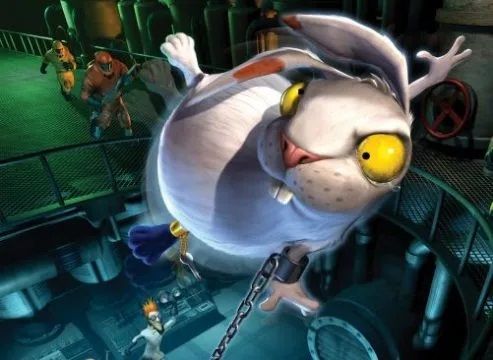 The chances that we get a new Whiplash are slim to none. It courted animal cruelty controversy at the time, and while that was a bit overblown and straight out of the 'video games are corrupting our children' playbook, I can't imagine it be welcomed so readily out of the wilderness. It's also no longer the platformer heyday, even as the genre enjoys a revival, and with games more expensive to make than ever, a new Tomb Raider is decidedly more reliable.

Having said that, despite the $300 million sale price seeming ridiculously low for the amount of IP and the studios themselves, there aren't as many high cards in the deck as you'd expect from a deal like this. There aren't too many moneymakers – that's why Deus Ex and Thief went away in the first place. Avengers is a bloated albatross, and while Guardians was a critical hit, that did not pair with commercial success and we don't know if the sale means Embracer has the Marvel deal Square Enix signed or just possession of the two games already in the wild. Legacy of Kain is ahead of Whiplash in the queue, but it's hardly a cash cow waiting to be milked. Square Enix still comes out of this deal looking worse off, but the more you look at the deal the more you realise Embracer Group essentially bought Tomb Raider (buy now and get Deus Ex free!) and became lumbered with a bunch of random games a lot of us have random feelings for, but that are never likely to actually be made. Yes, I'm including Thief in there.

Asking for a new Whiplash is stupid, but it also misses the point. Asking for any new games is stupid. Deus Ex is on the cards for sure, but we already knew a new Tomb Raider was happening and the future for Marvel games is unclear. As exciting as we seem to have decided it is when one conglomerate buys IP from a megacorp, the fact is very little is likely to change, at least on a 'what games can we play' front.