Master Chief is back with his biggest mission ever in Halo Infinite. The latest installment's wide-open campaign spaces may compel a greater number of players to crave similarly sizable multiplayer locales, and Big Team Battle delivers on that promise in spades.

Among Big Team Battle's maps, Highpower sports a ton of terrain and a relatively clear main path with various exciting branches. Fragmentation is like a trip through a nature park with several routes and lots of twisty turns. Deadlock is a slaughterhouse. At its core, it is unequivocally an arena. Its nocturnal setting adds to the effect, with laser fire and bullet sprees lighting up the night. Enemies are everywhere.

Whereas Highpower and Fragmentation offer lots of obvious ways for players with less-than-flawless aim to make themselves useful, Deadlock appears destined to dictate its every outcome per which side touts the deadlier precision. And yet, there are ways to win here without jumping directly into the fray on a wing and a prayer. Find out how to seize momentum in each of Big Team Battle's four modes. 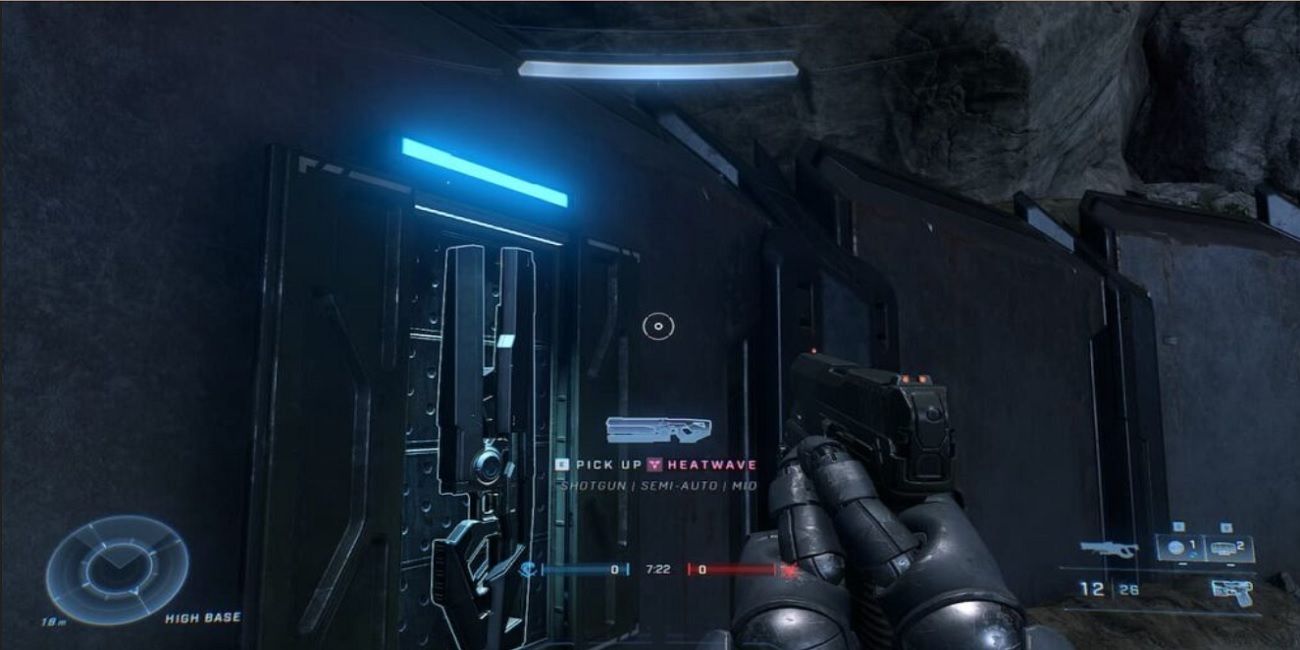 Deadlock is the most open map in the game. It places an emphasis on enemy visibility — there are so many areas here where you can see the competition. Rest assured, they can also see you. It's a daunting prospect to novice players.

Most vehicles will suffer on Deadlock. The narrow dirt roads zigzagging across the map seldom give Warthogs and Razorbacks ample time to pick up speed, turning drivers and gunners alike into slow-moving slabs of meat for hunters to mark and massacre. Ghosts are nimble exceptions, with their strong acceleration and ability to deliver enough firepower in a short enough span to be worth the inevitable explosion. Be cautious, though: in especially tight corners, Ghosts can easily be hijacked.

There is a cave on the far-right side of the map that serves the ironic purpose of being frequented by players hoping to get away from the action. If you're coming into the cave with the high ground, get ready to shoot as soon as you see a telltale helmet below. Sprinting in from the lower side without considerable vigilance is not recommended. 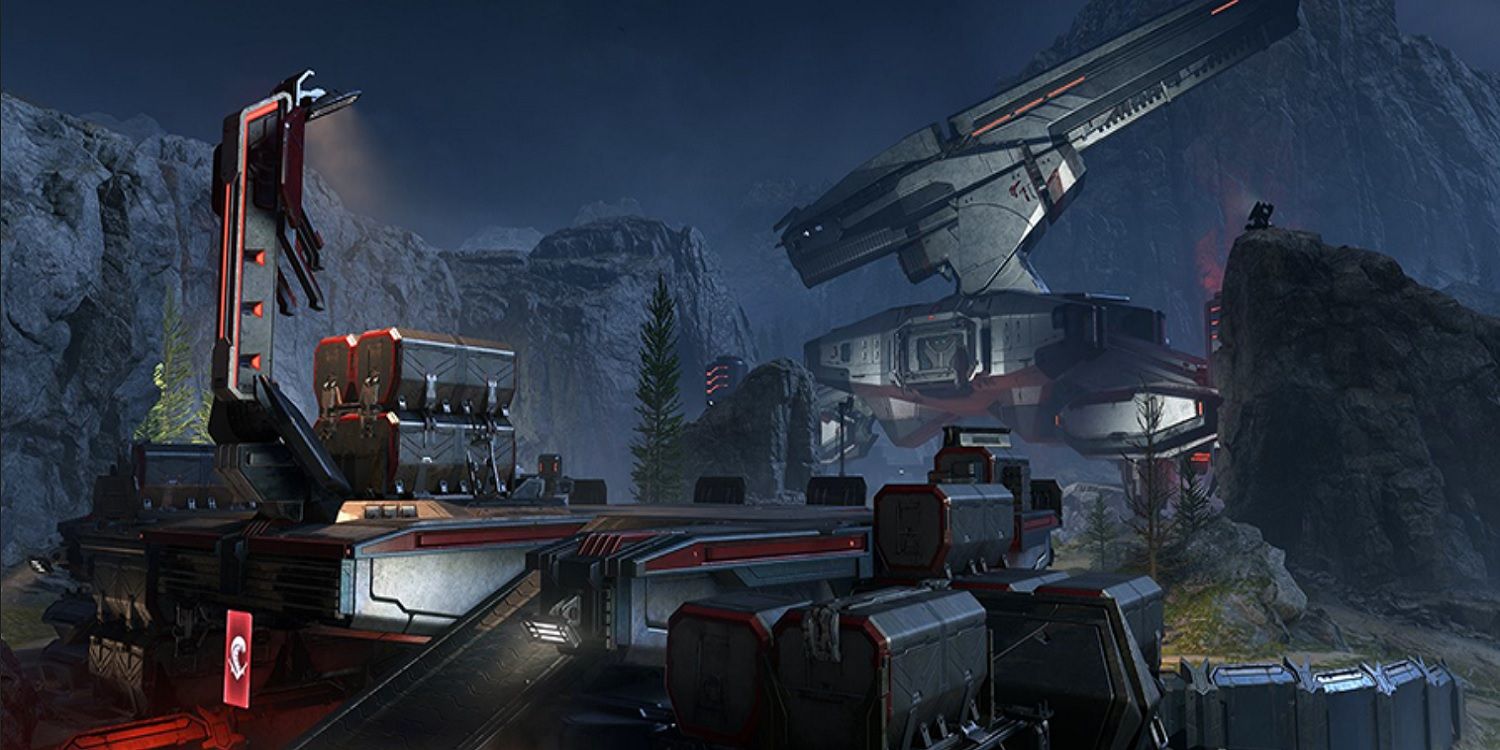 On opposite ends of the map, positioned strategically in front of each base, are a pair of cannons called Shade Turrets. They're surrounded by strong shields on three sides, but totally exposed on the remaining side, which means it can be a real challenge to take them down without sneaking up from behind. (And since "behind" is right where the enemy base happens to be, this isn't exactly simple either.)

It's better to blast Shade Turrets with SPNKRs and Hydras or Dynamo Grenades. Hydras will frequently appear in weapons lockers alongside similarly useful Shock Rifles. Even with these instruments of mayhem, a good angle sometimes necessitates being seen by the player manning the cannon, but if you can crouch carefully across the ditch walls on the way to the turret, it's feasible to take someone unaware.

Deadlock's distinct Killzone vibe extends to its potential arsenal. Since the map is so open, the ever-replenishing stock of pickups is never more than a stone's throw away. Repulsors will help keep enemies at bay in a pinch, and they can be mighty handy when someone inevitably lurks through one of the tunnels with an energy sword or gravity hammer.

Meanwhile, Active Camo commonly spawns over by the cave's upper entrance. Grabbing it undetected can be a challenge, but initiating its protection (and making sure you aren't sprinting, which largely ruins the camouflage) can make you an unseen angel of death even in the most obvious locales. If the Active Camo spawn points don't seem to be working, there's a decent chance your match has replaced them with Overshields. Overshields take a second to activate, but a quick tap of the corresponding button in the middle of a gunfight that's going south in a flash can mean the difference between death and, well, near-death.

Tactical Maneuvers for Each Deadlock Mode 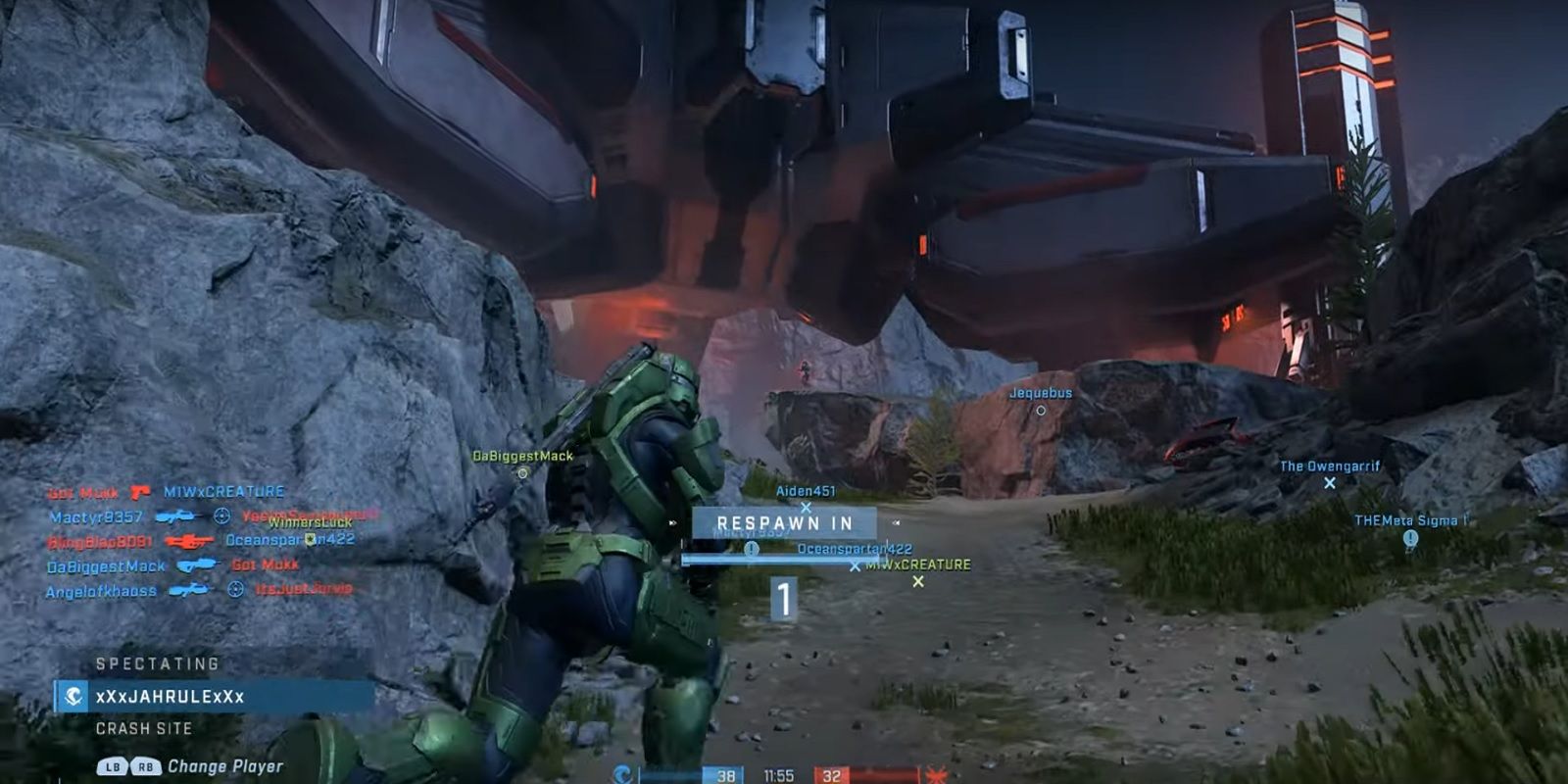 There are fewer deviations in strategy for each of Deadlock's four modes than what can be found in Highpower and Fragmentation. Your options are generally limited since it's harder to remain unexposed to other players for long. But there are still a few good tricks for each activity that can absolutely help turn the tide.

At first glance, Deadlock almost appears to be designed around Slayer and nothing but Slayer. In fact, second, third, and even fourth glances tend to support that claim. It's a sprawling coliseum-style region (in truth, a Banished forward operating base) where one's only hope of escaping difficult shootouts in the tunnel-like ditches often involves spending precious time climbing to higher elevations… where other players can lie in wait for ambush.

The saving grace here is that the outer edges of the map near each base have various obstacles and debris that can be used for cover. If you're a sniper, for instance, there's a spot near a crashed Wasp that overlooks a cliff; two red fences here do a surprisingly decent job at concealing people who lean into them from behind as far as possible.

Other "safe" zones (it's all quite relative, after all) include thick shrubbery jutting out at the bases' edges. Armor is a predominantly cosmetic affair in Halo Infinite, but don't let that stop you from dressing up in dark greens here. Every bit counts.

We mentioned earlier that Ghosts can be helpful on Deadlock despite its general anti-vehicle bend. Since Total Control involves capturing three circular spots at once, piloting a Ghost and driving in unpredictable circular motions while blasting your cannons can keep the rest of your team from prying eyes as they crouch about and claim a zone.

This technically works with the Brute Chopper, too, especially if the enemy is blitzing in on-foot letting you crush them just so. But since both the Ghost and Brute Chopper rely on vehicle drops from the Pelican ships, don't count on either of them always appearing when it counts.

Never stop moving. Deadlock is a camper's dream on Total Control. If the enemy can see you moving, they can just as easily see you sitting over by a bunch of shrapnel. Assume there's a target lock on you at all times.

It's important for some folks to play defense in Capture the Flag, be it through four-player single-flag mode or Big Team Battle. But there is arguably no map where this matters as much as it does on Deadlock. The increased visibility couples well with the pillbox ditches to forge a scenario in which players will frequently roam in droves. Packs of human-controlled Spartans require a heck of a bastion to keep at bay.

Hide behind the few obstacles near your base whenever possible. Consider hanging out at the equipment shack to your base's left, staying still behind a crate, and then ambushing one of those roving adversarial bands from behind as they run their way to your flag.

A common tactic on Deadlock — it occurs on other maps but Deadlock makes it a cinch — is for several players to linger close to the opposing team's flag spawn point even after the flag's been stolen. Since player spawns depend upon line-of-sight, these groups can effectively prevent members of the other team from resurrecting within a precious seven or eight meters (or more). As soon as the flag is delivered, another one pops up. Rinse and repeat.

This is obviously intensely frustrating if you're on that other team and there's not a whole lot that can be done about it if your team is uncoordinated. If you can gain control of your base's Shade Cannon and begin firing directly at your base, however, you can scatter these packs of flagpole predators to the winds.

To the shock of no one, power cells drop in wide spaces on Deadlock, meaning every round's a race to survive a bunch of bullets and hop away anxiously with a cell in your arms. This is less than ideal for the careful player, and downright terrifying for anyone whose accuracy is middling.

If any of that applies to you, stick close to your base instead. Neither Highpower nor Fragmentation features quite so many surefire efforts at cell-stealing as Deadlock does, because it's mostly a straight line to the enemy terminal. When things get wild — and wild they will sometimes get — players will be stealing each other's power cells more times than they'll secure their own.

You can be an invaluable asset to your team by taking the Shock Rifle, Cindershot, or Mangler that restocks at weapon lockers near your base and hanging out until the inevitable comes to pass. If you're worried about getting brought down before you've been of any help, wait until the enemy players are at your terminal and snipe them with a headshot. It takes several seconds to successfully steal a cell, meaning they're powerless to prevent you without giving up and turning around without their prize.