Earlier this week, I had the chance to play Exoprimal’s technical test for a few hours, Capcom’s upcoming dinosaur game that isn’t Dino Crisis. I was pretty impressed with it overall, but thought that it needed some changes made to the core structure to truly reach its full potential.

One element of Exoprimal that does feel fully realised, however, is the dinosaurs. Not only are there several different types of prehistoric lizards, but they’re all superbly detailed and come to life thanks to great animation. They’re also incredibly squishy and great to watch get torn apart by guns, swords, and futuristic exo suits.

What’s most impressive about the dinosaurs is the sheer number of them that can be on screen at once. When you’re running around in the game’s core mode, Dinosaur Survival, you’ll be fighting off swarms of them and there can easily be close to 50 raptors running around at any given moment, alongside other types of dinosaurs I won’t pretend to know the name of. 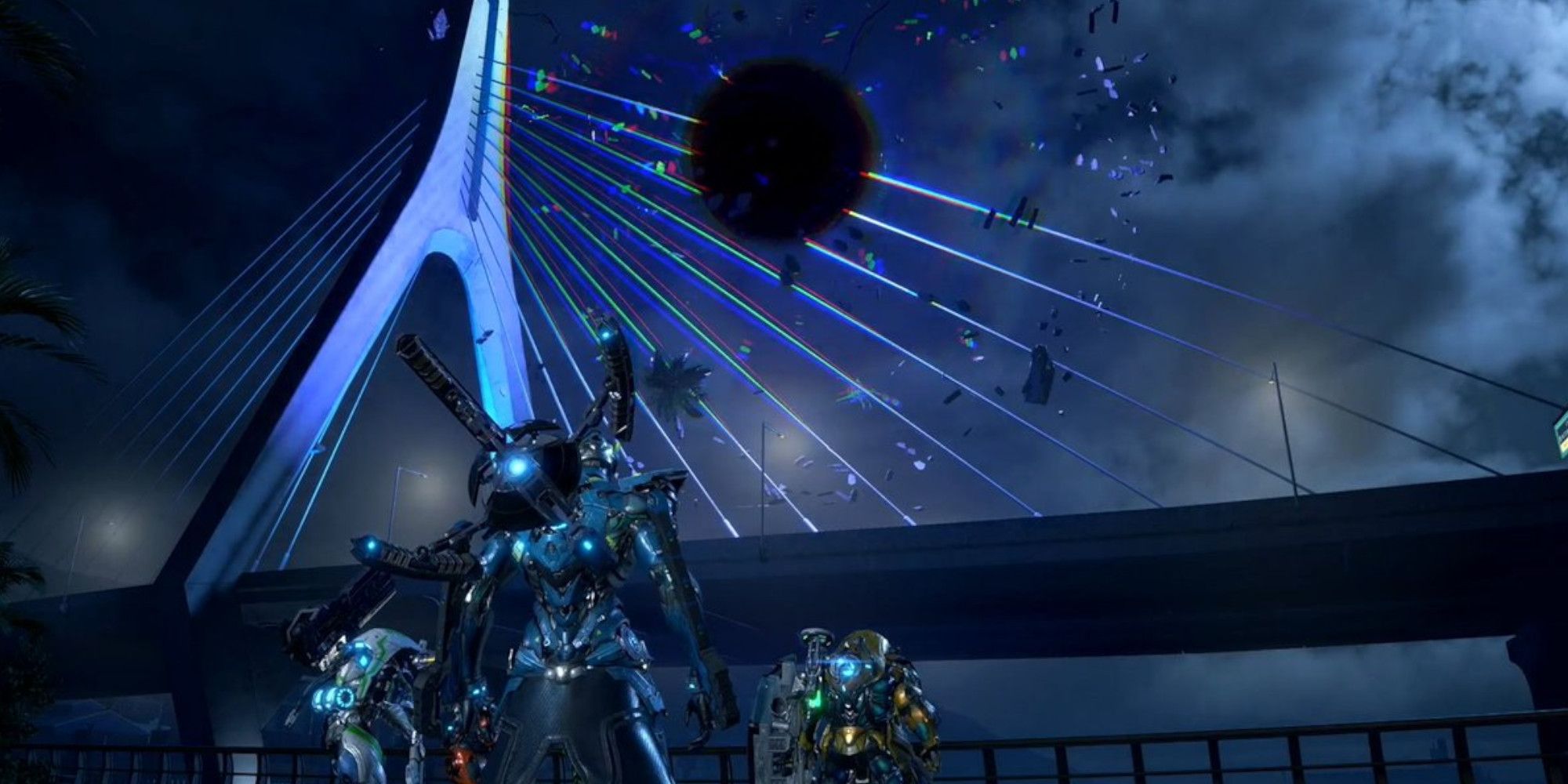 It’s been clear from Exoprimal’s first trailer that there’d be a lot of dinosaurs to fight, but it never quite felt real until my whole squad was surrounded by them. Watching as one tank uses a shield to fend them off and seeing the exosuit struggle under the weight of a bunch of raptors felt cinematic in a way I didn’t think Exoprimal could ever hope to achieve. This isn’t Dino Crisis, but with this level of spectacle I’m unsure it really needs to be.

Things really come to a head in the semi-final section of each match. As you reach a key location on the map, you’ll see a black hole open up in the sky as an AI voice warns you that a dinosaur storm is on the way and your chances of survival are low. As alarms blare in the background and everyone waits around for the main event, it feels like a theme park ride coming to life. The first of these dinosaur storms I experienced took place next to a massive tower and it featured 1,000 raptors raining down from the sky in real-time and absolutely swarming my squad as we scrambled to react and figure out our strategy.

I haven’t experiencing such a jaw-dropping moment in a game for quite some time, but as I saw all of my squad panickedly trying to get rid of the raptors by any means necessary and watched as my own health nearly ran out as I tried to reach higher ground, I couldn’t help but sit slack-jawed at some of the tech on display. Capcom might actually be onto something here. 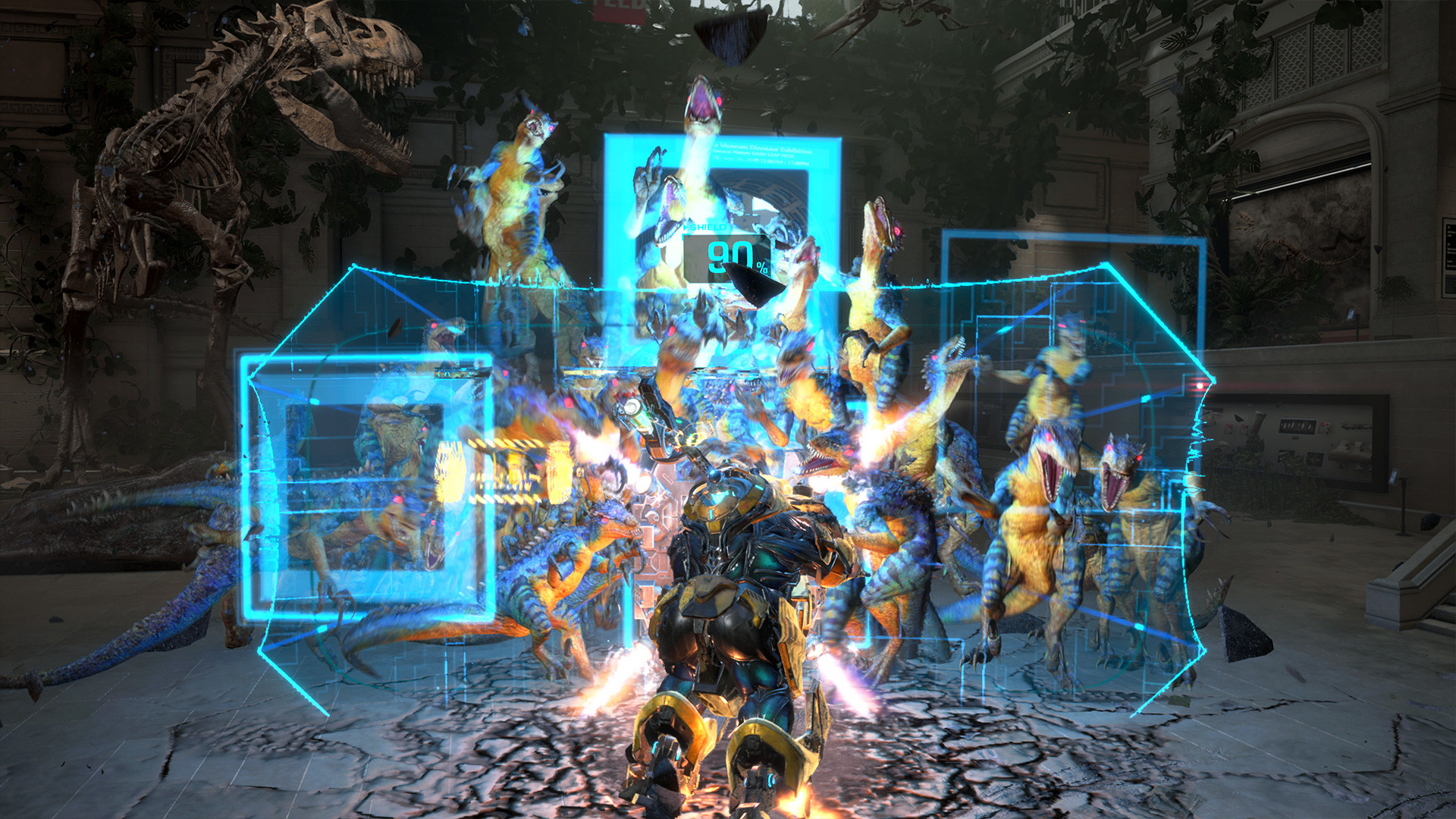 Storms also change depending on the map, as another city area instead saw the raptors spawning in behind a barricade, which they promptly destroyed as they all charged through it. My favourite was a level that took place near a bridge, which is where the black hole decided to drop the raptors in on. Seeing a thousand of them running across the bridge towards our squad was so cool, and honestly almost worth playing Exoprimal for.

It reminded me of Dead Rising and the early Xbox 360 days. Seeing hundreds of zombies next to each other in the tunnels was another defining moment for me growing up, except this time it’s thousands of raptors that are much more detailed and much more deadly.

Exoprimal has its fair share of problems and despite having fun with it I’m not quite sold on it yet, but these dinosaur storms are so cool and feel so “next-gen” that I know I’ll be jumping back in to play and watch it all over again when the full games releases.