A big part of the appeal of Mass Effect for me is that feeling of being in command of my own starship, exploring the depths of space, meeting weird aliens, getting into adventures, and generally living out all my Star Trek fantasies. It's something that runs through the whole trilogy, but the only game that really makes me feel like I'm a daring galactic explorer is the original. People hated the bouncy, unwieldy handling of the Mako, inspiring BioWare to radically overhaul its handling in the recent remasters. But even at its floatiest and most frustrating, I've always had a weird soft spot for these divisive sections of the first game.

In Mass Effect 2 and 3, you select a planet on the galaxy map, watch a few short cutscenes, and suddenly you're on the surface. That's fine, but exploring strange new worlds in the original is a much more involved experience. You're dropped on a planet and left to your own devices. You trundle around the surface in the Mako looking for points of interest, whether it's a distress beacon, a crashed satellite to salvage, a hidden bandit hideout, or some valuable natural resources. You can stay in the vehicle or leave it and run around on foot, and finding everything on every available planet is hugely satisfying if you're a completionist. 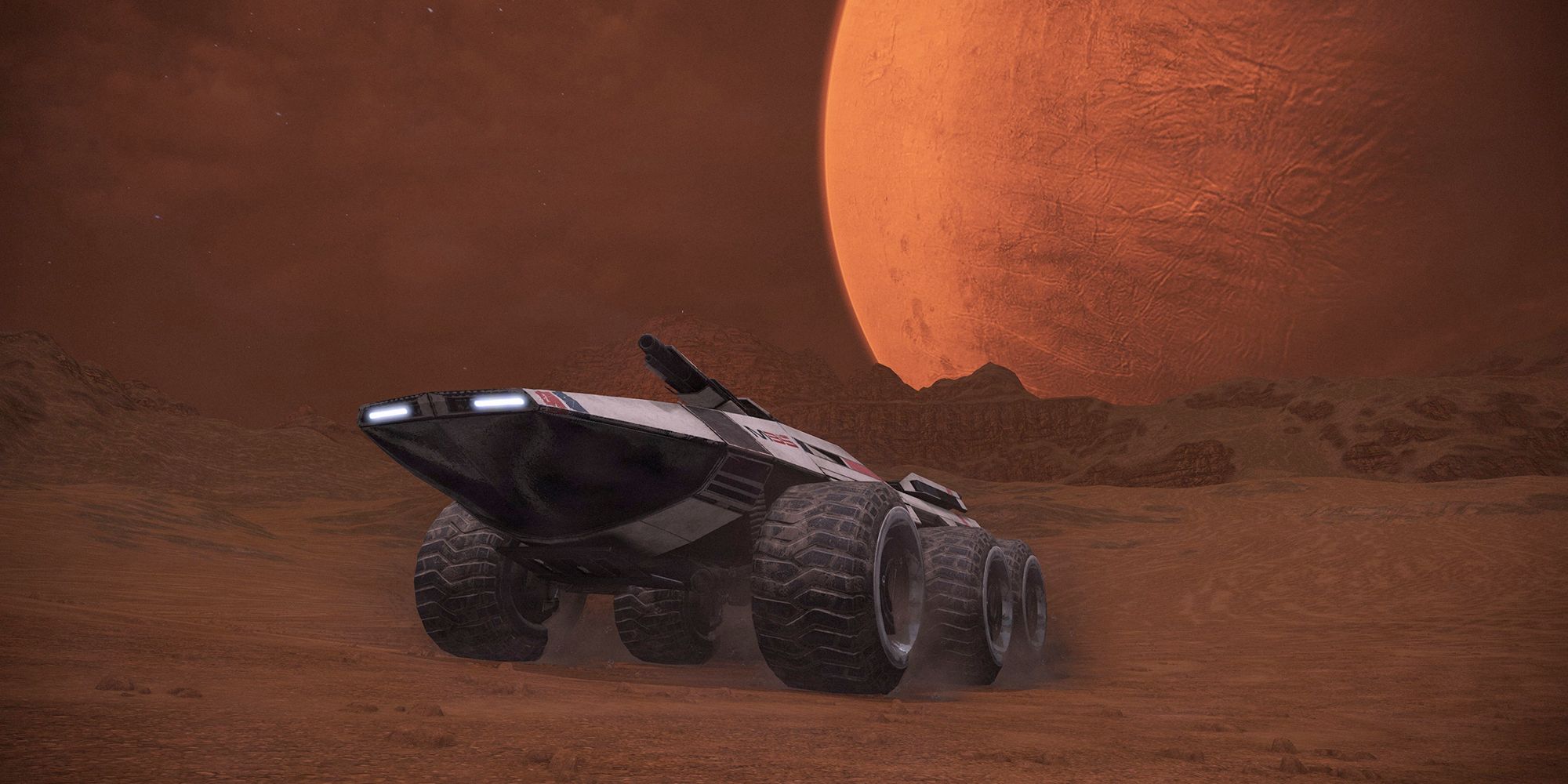 Alright, so basically every planet is a featureless desert of rock and dust. If BioWare had more time, money, and manpower I'm sure it would have given its worlds unique terrain, flora, and fauna. But for whatever reason, they're all essentially the same. But that doesn't mean they're boring to look at. Quite the contrary. Spend enough time visiting these optional planets and you'll witness things that would impress Roy Batty. There are ancient pyramids, fiery blue suns, alien monoliths, and moons looming dramatically over the horizon. It's only a small corner of the universe, but there's some lovely cosmic scenery out there.

There's some weird stuff too. On a grassy planet in the Kepler Verge, Shepard and the gang stumble upon a herd of weird-looking alien cows. Point at one and the game will highlight it as a 'Shifty Looking Cow', and when you turn your back on it you'll start losing credits. This is, as daft as it sounds, a species of bovine pickpockets. You can kill it, but another will replace it and you won't get your stolen money back. It's a bizarre, ridiculous encounter, but it's moments like this that make all that time spent speeding around in the Mako worth it. I just wish there were more to break up all the repetitive Geth and slaver battles. 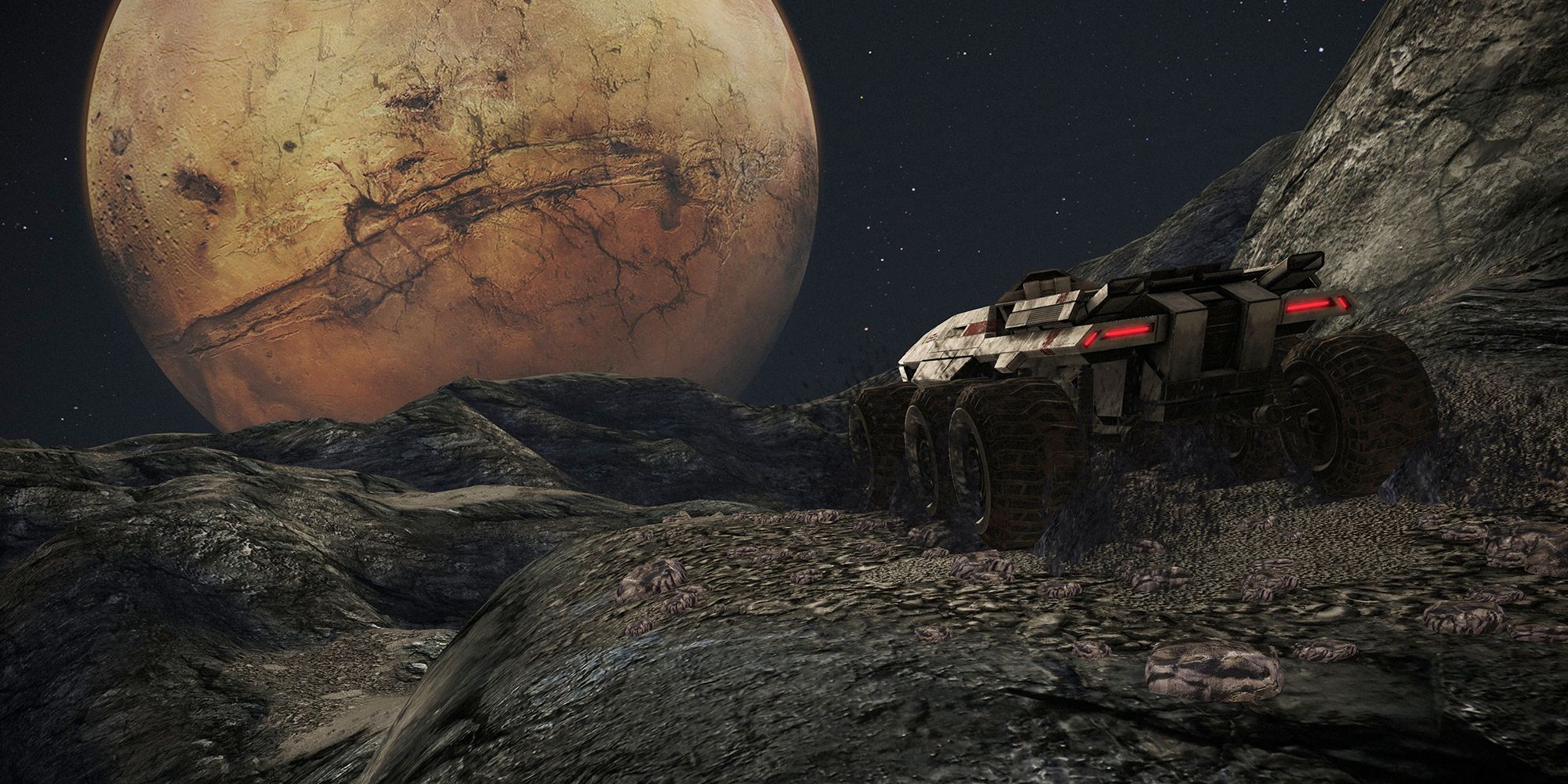 There are some interesting nuggets of storytelling hidden in Mass Effect's universe as well. Travel to a planet named Eletania and, if you have a special item from a Citadel sidequest, an alien ruin on the surface can be activated. Doing so gives Shepard a vision of being a primitive human on Earth thousands of years ago, being observed by higher beings that are almost certainly the Protheans. It's an evocative little piece of Arthur C. Clarke inspired science fiction, and is completely missable if you decide not to engage with this part of the game. Again, it's a shame these hand-crafted encounters are so few and far between.

As much as I enjoy Mass Effect's planetary exploration (there are dozens of us), I admit that it's somewhat half-baked and poorly implemented. But I wish the rest of the trilogy had expanded on it, rather than just ditching it entirely for a more streamlined, linear structure. Mass Effect: Andromeda brought some of this back with its bigger, more open environments and the Nomad, an easier to drive successor to the Mako. But it still felt limited in scope compared to the original's large selection of star systems and landable planets. Hopefully the upcoming Mass Effect revival will continue what the first game started.