The last boss of Fallen Legion Revenants' third Chapter comes as quite the surprise. Narratively, the game has picked up with the crashing descent of Welkin, but there was no build-up to the boss you are about to face. Gallow Tree well and truly comes out of nowhere and does an excellent job at showing you why you should also stay on your toes when wandering through the Miasma.

Gallow Tree is a full-blow, three-phased boss fight that can quickly get out of control. Similar to Catherine from Chapter Two, Gallow Tree is very much themed around its minions, although thematically and mechanically, Gallow Tree ends up delivering something altogether very different. 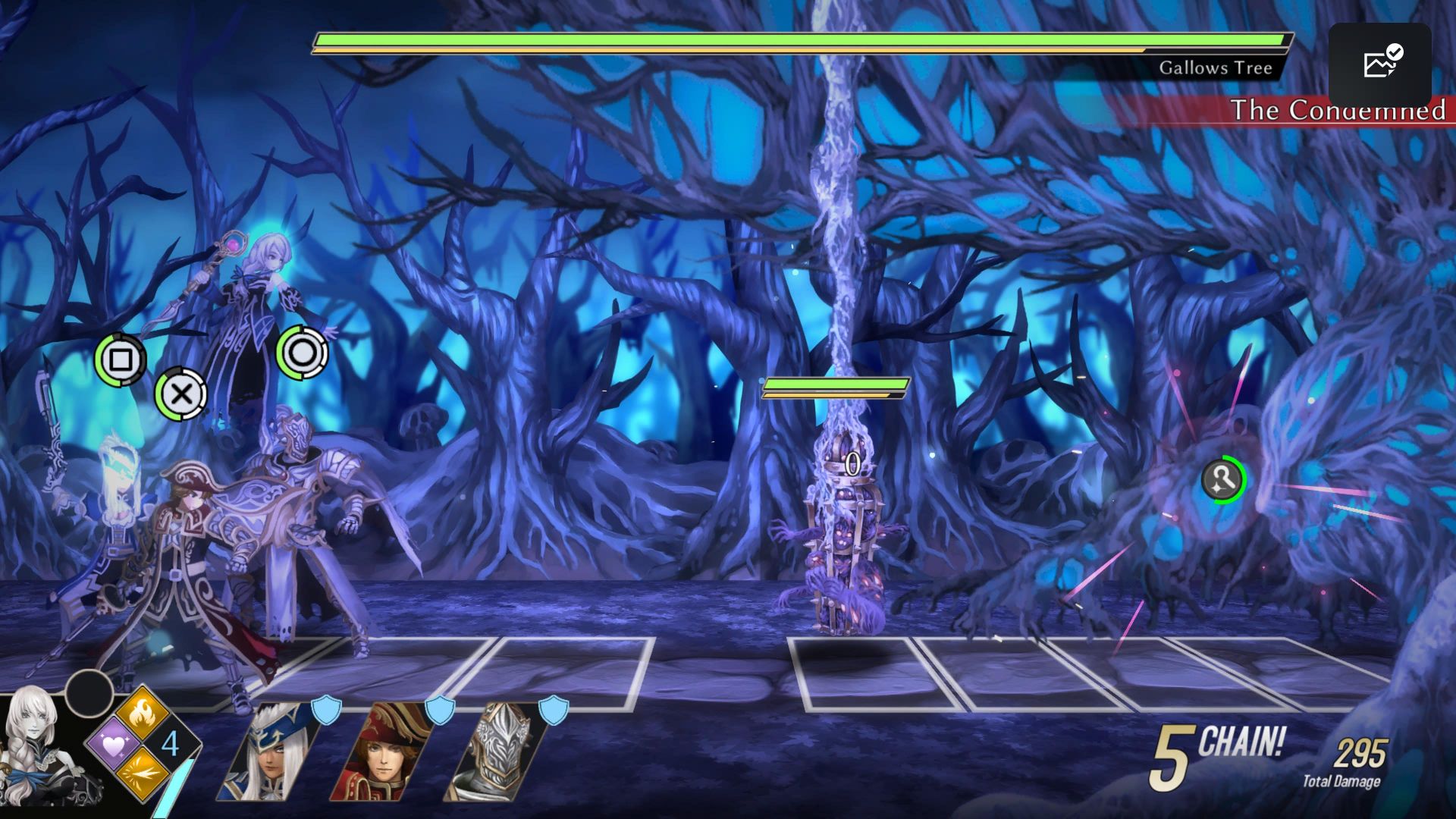 The Gallow Tree doesn’t attack often, but when it does, it deals a tremendous amount of damage. Nearly all of its attacks are AOE, and we found their timing to be difficult to lock down, leading to our early attempts to be filled with healing – which slowed our progress substantially. Not only that, but Gallow Tree’s minions will also attack in various ways, and they are far more aggressive than the tree itself. 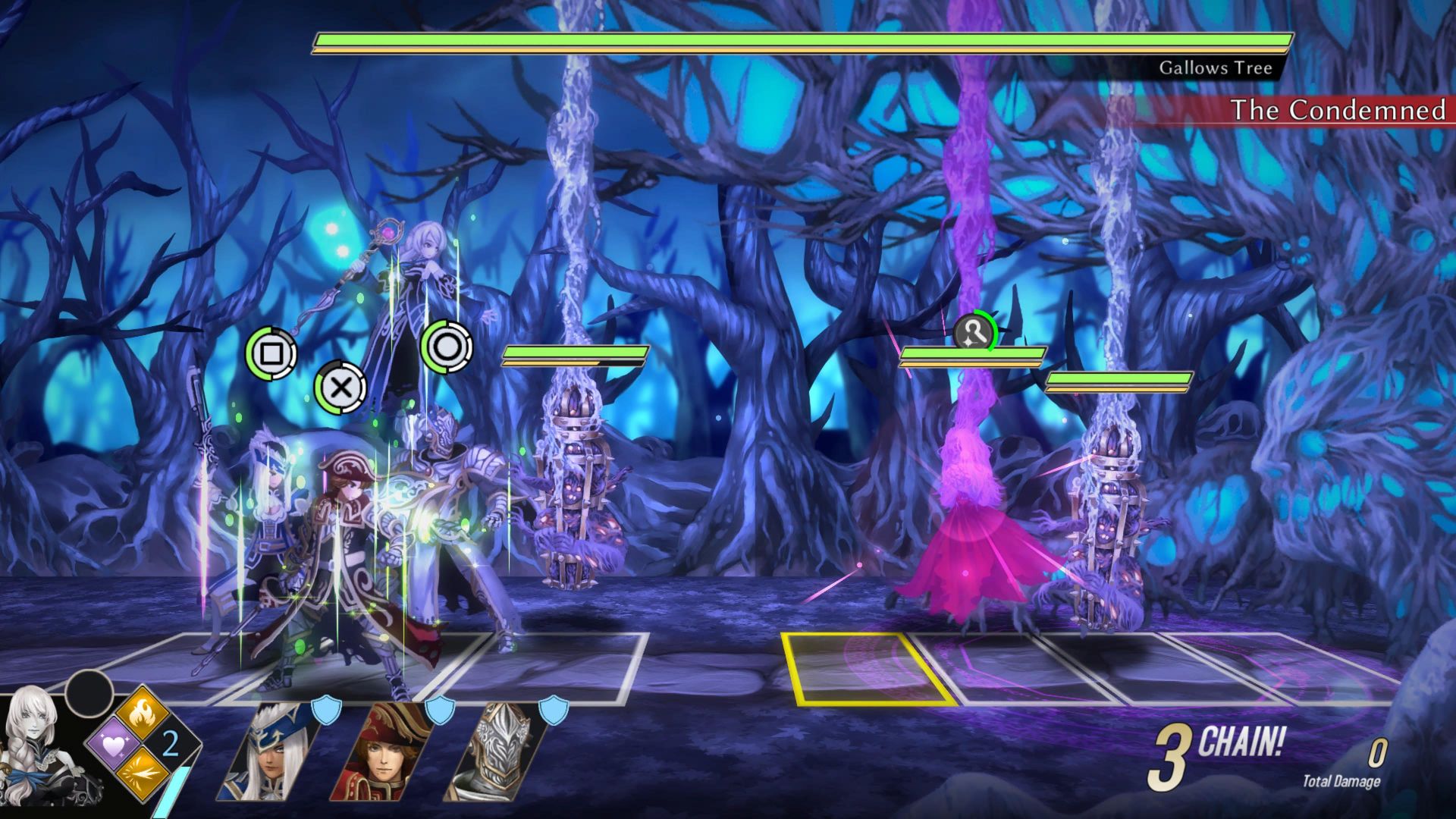 The Gallow Tree has a lot of attacks thanks to its many minions, however, it only really has two unique mechanics, and they are so interwoven they may as well just be considered one. Gallow Tree’s minions are its biggest boon and ultimately, its downfall.

Because of this, your primary target should always be Absolved – so much so that from phase two onwards, you should completely ignore Condemned.

This fight is very Mana intensive, so remember to use Mana Chaining to quickly regenerate your Mana reserves.

Which Exemplars To Take

Because Absolved is the key to victory, you want Exemplars who can target Absolved from anywhere on the board, and be able to deal high amounts of damage. This makes Exemplars like Jacquine, Burgundy, Solomon, Dadenelle etc. very useful. Ideally, you want Deathblows that can do the same as Absolved and are fairly resistant to basic attacks.

We found Dardenelle’s Napalm Deathblow to be outstanding in this fight, as well as Zulfiqar’s Radiant Smite as they did high amounts of damage and could strike Absolved from just about anywhere. 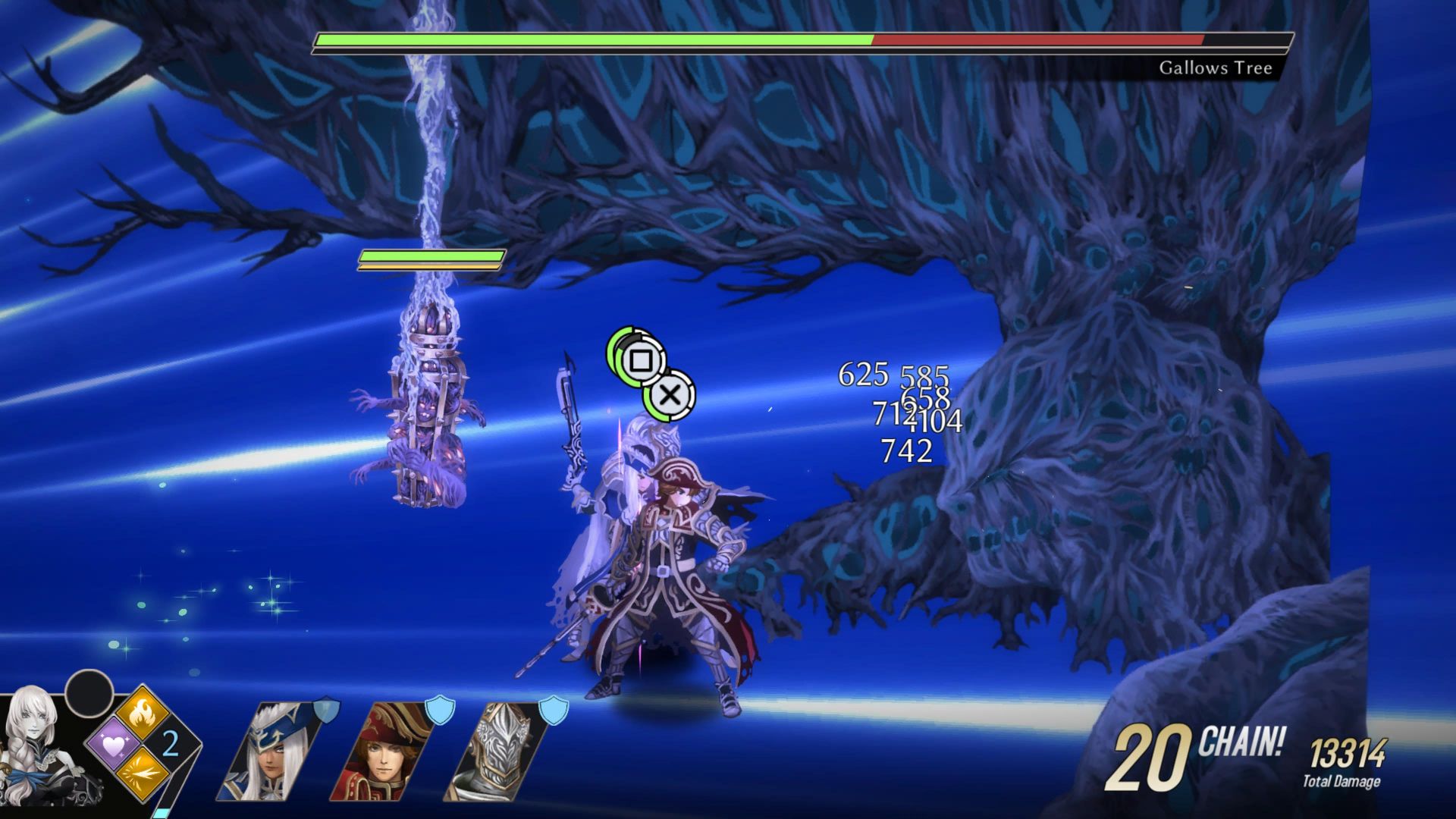 The Gallow Tree is split into three phases, and how you deal with each phase changes slightly.

Phase one is fairly simple. Gallow Tree doesn’t have access to its full repertoire of attacks, and it only has support from one Condemned. Quickly burst down Condemned’s BP gauge to remove it from the battlefield and then burn as much Mana and AP as you can, damaging Gallow Tree directly.

Gallow tree has surprisingly low BP, and in phase one, its HP is also fairly low allowing for a quick end to the phase if you can deal enough BP and Rushdown damage.

Phase Two is where the fight begins. Gallow Tree has access to more attacks, and not only that, but it also summons a Condemned and Absolved to aid it. The Condemned more or less stays the same and will attack you regularly. The Absolved will mostly mess with your playspace.

The trick here is Stagger Absolved quickly – burning as much Mana and AP as required. This will instantly Break the Gallow Tree, allowing you to unleash a Rushdown attack. Not only that, but Staggering Absolved will also Stagger any active Condemned.

All enemies are now more aggressive, making this phase incredibly dangerous as damage can quickly wrack up and overwhelm your Exemplars. If you start taking damage, you will be forced to heal. This will eat into your Mana reserves, making it harder to Stagger Absolved.

This phase can very quickly spiral out of control, so your best bet is to play very aggressively and Stagger Absolved as soon as it appears. Use as many Deathblows as you can to take it out of commission, and then Rushdown Gallow Tree. You will need to do this several times to win.