Tech has come to tabletop gaming whether you like it or not. Services like D&D Beyond crunch all the numbers and tell players exactly what powers their next level grants. This is great for new players, who might be intimidated by a 250-page rulebook. Others, however, don’t get the same feel from touchscreen-friendly character sheets. They need pen-and-paper for it to feel like a real Dungeons & Dragons experience. To that end, many companies have put out some version of a “complete” character sheet in journal form. The latest comes from Field Notes, masters of the no-frills notebook. 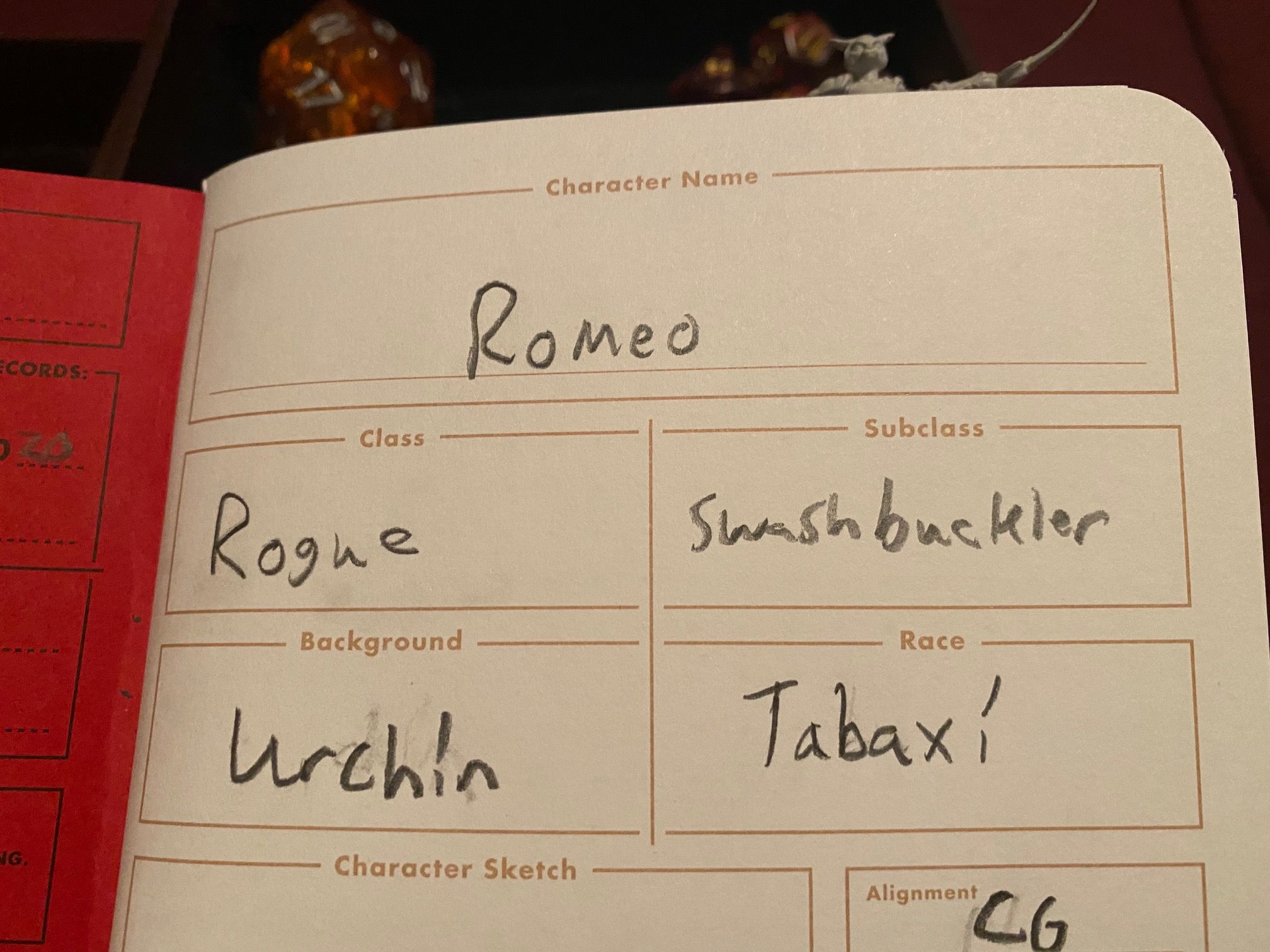 The Field Notes 5E Character Journal comes in a pack of two for $16.95. It’s a little bigger than the average Field Notes memo book at 4.75″ x 7.5″ and comes only in red. Flipping it open reveals sights that could only be in a D&D product. The inside cover still has spots for your name, address, and other pertinent information for anyone who might return a lost journal. But it also has charts for things like levels of exhaustion and 5E spell areas. The pages are all pre-sectioned and labeled with everything needed to tell the story of a new adventurer.

I used the journal for a brand new character I created – Romeo, a tabaxi rogue seeking to amass a fortune and use it to woo a noble lady he’s fallen for.

A Record Of Romeo’s Exploits 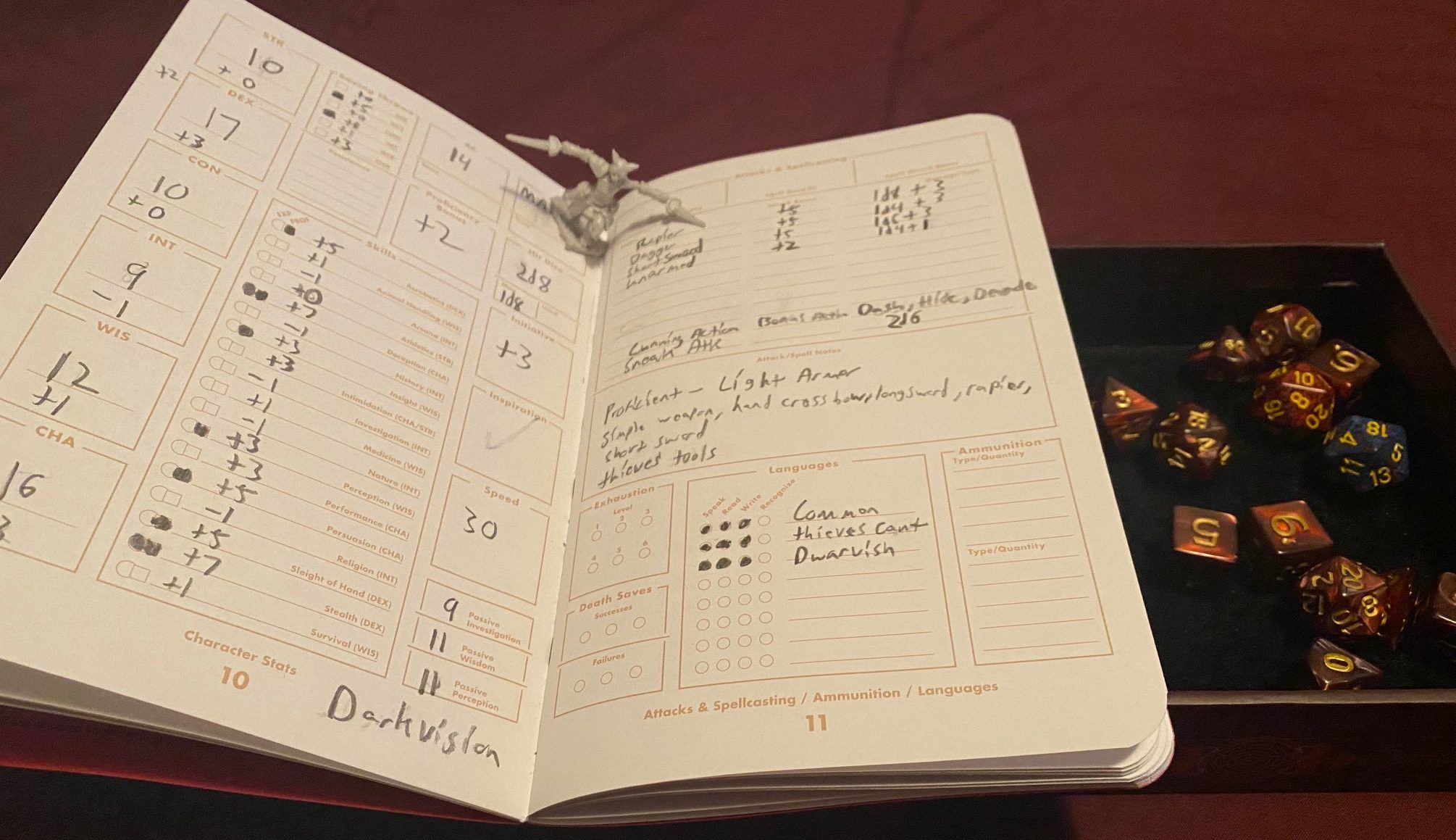 After the introductory stuff is a few pages left relatively blank. These spaces are allotted for greater detail in a character’s backstory, particularly bits pertaining to their ancestry, class history, and of course all the bonds and flaws stuff. After that are the parts that look like a familiar character sheet. There are even two pages dedicated to the class table, with proficiency scores included. Between that and the info in the inside cover, there’s definitely a feeling that the 5E Character Journal is meant to be all-inclusive. Someone who really wanted to record everything in the journal could even forgo lugging their Player’s Handbook around.

The most useful part when it came to recording Romeo was the back half of the journal. After the pages dedicated to spells (which Romeo didn’t need as he went for the swashbuckler subclass) and equipment/treasures, there is a more general notes section. This is cleverly broken down into one page per level.

I played Romeo in Adventurer’s League. For those who don’t know, AL is the officially-endorsed organized play system of Dungeons & Dragons. Local game stores host one weekly night of AL, and players can drop-in for one quick adventure. Due to its standardized nature, AL players are expected to keep a record of their sessions. In particular, players are supposed to record the session number, DM, and rewards earned. The Field Notes journal was pretty much made for this task, with the level sections giving me an easy record of Romeo’s AL adventures. There’s even a section dedicated to logging each session by date.

Make It Your Own 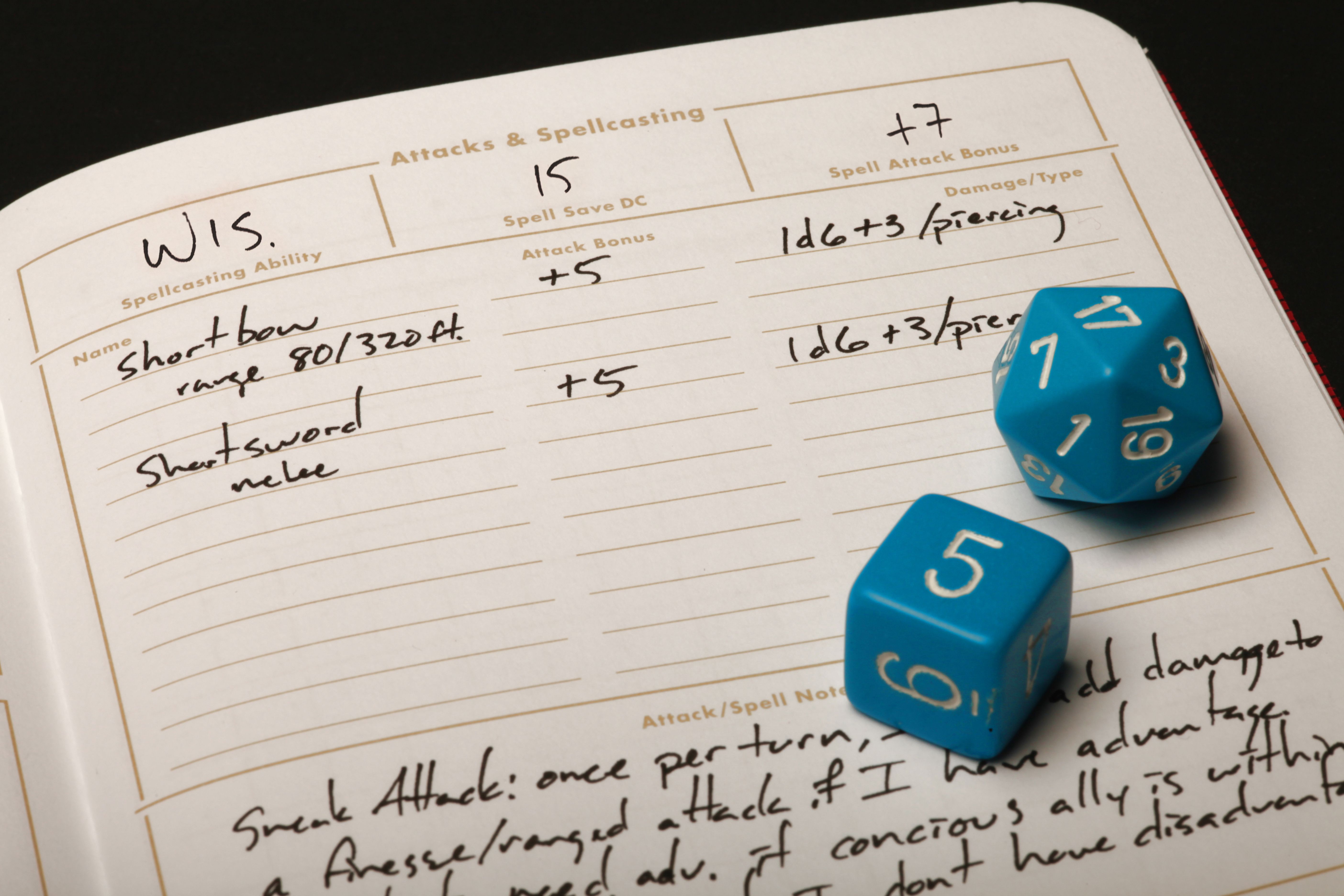 Field Notes collaborated with the Chicago Board Game Cafe to create the 5E Character Journal. This is supposed to lend the journal a certain legitimacy, as it’s been playtested by tabletop authorities. This rings true for the most part, as the journal does contain pretty much every section a D&D player could want. There is just one aspect I disliked.

The Features & Traits section is a few pages away from the character sheet. This proved inefficient for my rogue Romeo, as many of his class/race Features are combat-related. It feels weird to have Sneak Attack – a Feature that does damage – not be listed near my weapon damage. That said, this is more of a 5E problem than this journal’s failing. Even D&D Beyond lists Features on a separate section from combat actions. In one way, this might even speak to the journal’s strength. My solution was to just write in Romeo’s Sneak Attack damage in the weapons section. That’s the nice thing about a paper character sheet – I can write information wherever I want it to be.

Tell Your Story Your Way

Field Notes’ 5E Character Journal is the best character sheet I’ve ever used. With that in mind, I’m also aware that the standard character sheet is free to download and can be printed at home. This journal, therefore, is made for those who plan to deeply develop one character over a long campaign. If that sounds like you, then you should be heading to Field Notes’ website to pick up a pack. If you’re still getting used to creating characters or enjoying the convenience of D&D Beyond, wait until you get a few more levels under your belt.

A pack of 5E Character Journals was given to TheGamer for this review. They’re available now on Field Notes’ website.