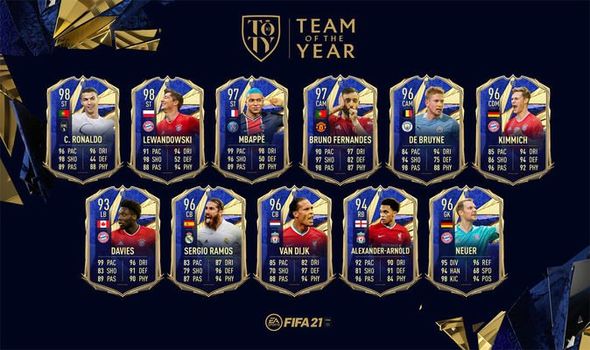 FIFA 21 TOTY squad is out now in Ultimate Team packs, with the full Team of the Year squad available for FUT fans to get hold of.

After the launch of the FIFA 21 TOTY promo last week the full Team of the Year squad is now available in FUT 21 packs.

The news was announced by the @EASportsFIFA Twitter who said: “Squad goals. Your full Team of the Year XI, now available in #FUT. #TOTY #FIFA21”.

Like last year, the FIFA 21 TOTY squad was voted for by fans with millions of votes coming in this year to select the latest Team of the Year line-up.

And there’s a strong Premier League contingent with four of the 11 players in the FIFA 21 TOTY squad from the EPL.

The FIFA 21 TOTY squad was whittled down from a selection of 70 nominees, with over 10million votes cast to decide on the final line-up.

Speaking previously about the Team of the Week promotion EA said: “70 of the best players from the past 12 months were nominated for the FIFA 21 Team of the Year, with over 10 million votes helping to decide who made the final XI – the definitive list of the world’s best.

Special TOTY player items featuring some of the highest ratings of the season will be released in FUT 21 for a limited time from January 22 to celebrate each player’s incredible performances over the course of a year like no other.”