If you’re playing Final Fantasy 12 and looking to earn yourself the “Collector” trophy/achievement for obtaining the Morbid Urn, we’ve got everything you need to know right here. There are a number of pre-requisites that players have to do in order to make this item available from the bazaar.

Essentially, you have to sell three different items earned from hunts in order to make the Morbid Urn appear, which when purchased is revealed to be a Canopic Jar. This item makes regular enemies drop Arcana and rare enemies drop High Arcana. Check out our full walkthrough just below. 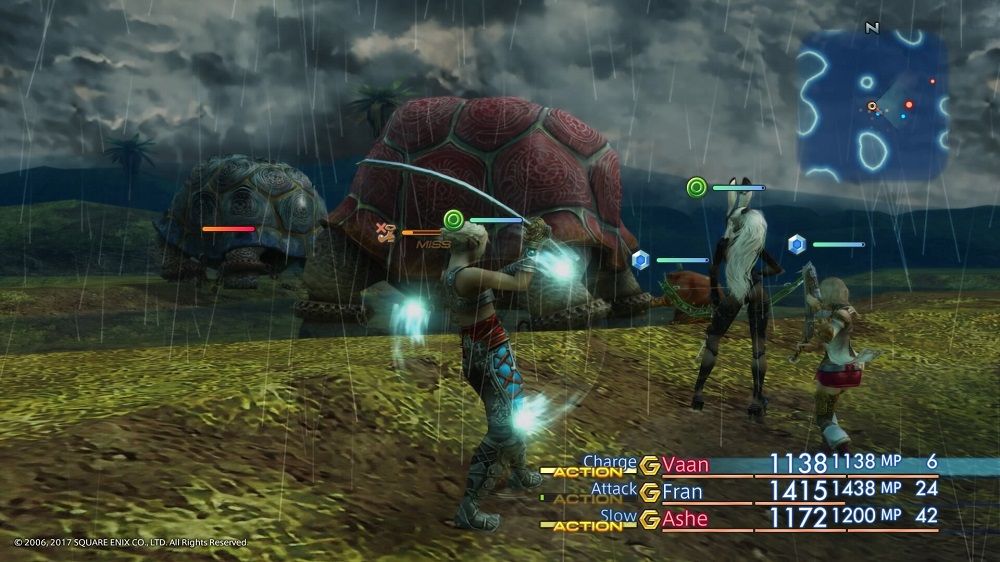 The Weather Eye NPC in Rabanastre will tell you what the weather is like, but essentially you get two hours of dry followed by an hour of rain, though fast-forwarding time in the game does not affect this.

Gil Snapper is a Rank III Elite Mark and it can be found in the Tracks of the Beast, which is in the bottom east corner of the Giza Plains. To be able to access this area, players first need to cut down several withered trees that can be found throughout the area. There are six withered trees in total and they are quite easy to spot as they are white and old-looking. Just below is a map showing the location of all the trees. 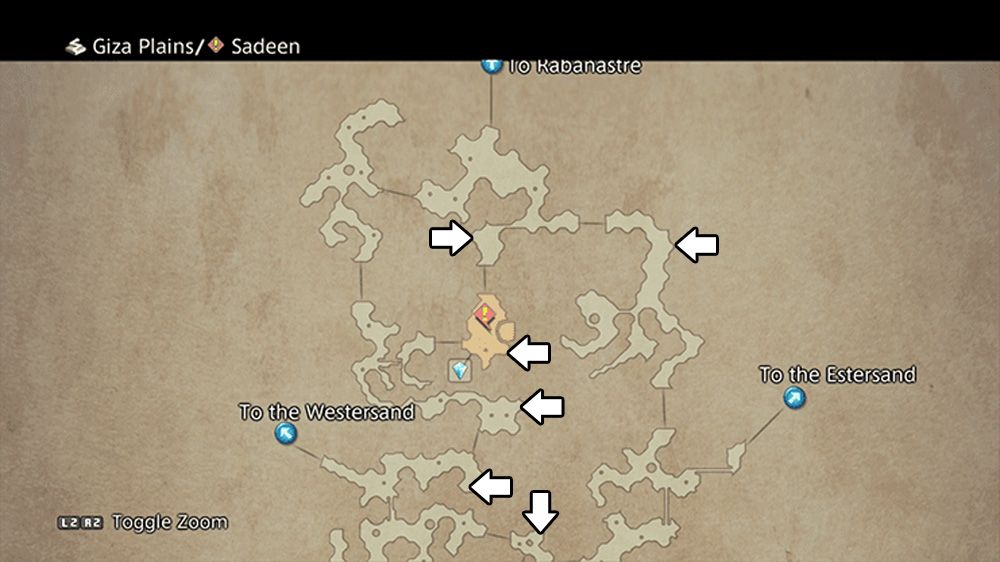 Once you’ve cut down all six trees, head over to the Giza’s South Bank and just south of the wooden bridge you will find a newly created bridge from the withered trees. You can now use this bridge to enter the Tracks of the Beast area where your mark awaits. 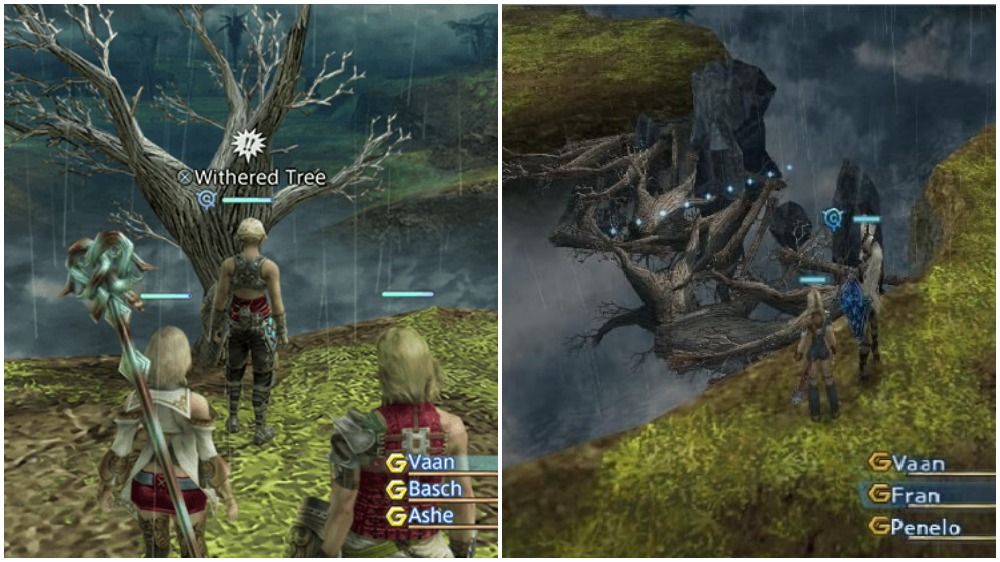 When you enter the area, a seeq NPC by the name of Bansat will be there and he will tell you whether the mark is there or not. Remember, it must be during the rainy season for the Gil Snapper to appear.

Gil Snapper is weak to Lightning and absorbs Ice. It also starts with Protect, Haste, and Shell, so be sure to dispel these. It is weak to Immobilize, though this doesn’t often stick. Set your party up with Reflect and focus on Thundara (if you have it) to deal the most damage. If you’re struggling, you can summon Belias to help out.

Return to Nanau after defeating the Gil Snapper, though instead there will be a note saying that she left to meet with her tribe. Visit her when the dry season is occurring and you will find her once more, and then she will give you your reward of 3,000 Gil and the Phobos Glaze. 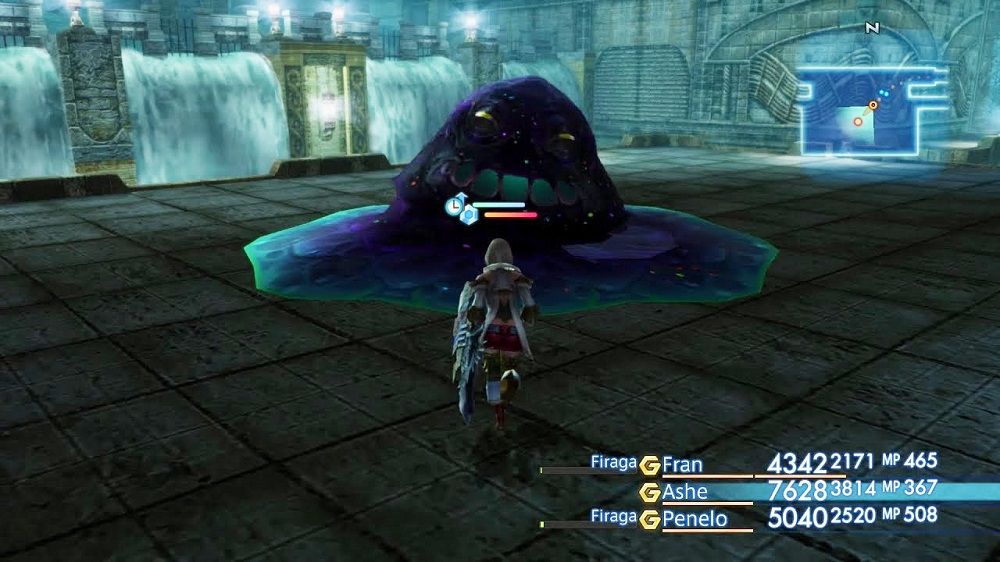 Orthos is a Rank V Elit Mark that can be found in the Garamsythe Waterway in the Southern Sluiceway, but he will only appear if the party consists of three female characters when you enter the area. Once he has been successfully spawned, you can change your party setup however you like, so you don’t actually have to fight him with an all-female party if you don’t want to.

This fight will be a lot easier if you equip your party with Sashes to avoid Orthros inflicting Slowga on them. Because it’s a flan, physical attacks don’t do as much damage, so you should use Bravery and Faith to help increase your damage output. Having Protect, Shell and Haste are also ideal. One quick way to finish this battle is to cast Reflectga on the entire party and then cast Firaga on your party, which will cause 3-4 Firaga hits on Orthros. Additionally, you can cast Sleep on it and then summon an Esper to finish the job.

After you have defeated Orthros, return to the Contrite Thief to receive your reward of 3,800 Gil, Horakhty’s Flame, and Unpurified Ether. Additionally, another NPC will approach you afterward and give you the Blackened Fragment, which is related to the Three Medallions quest. 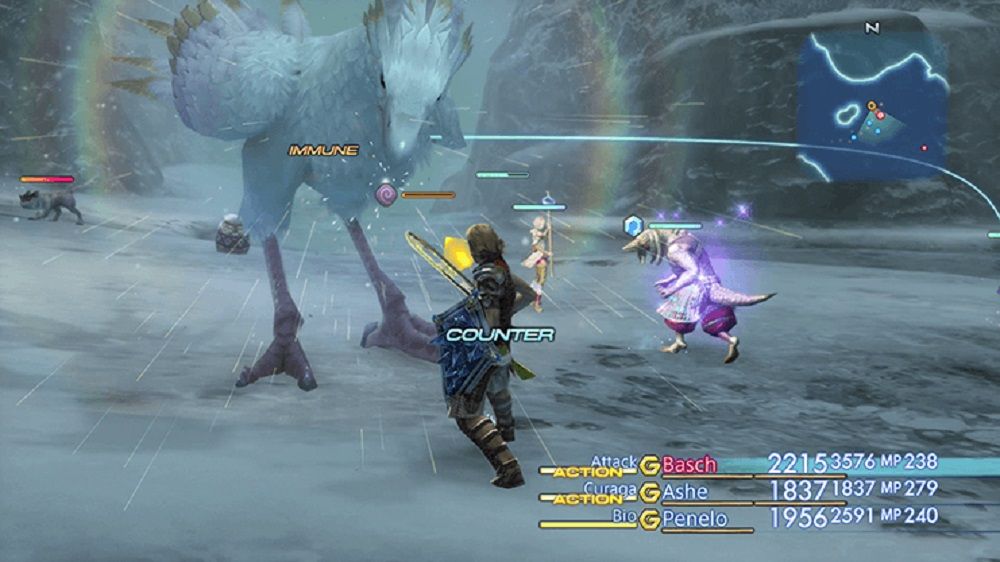 The white Chocobo known as Trickster is a Rank V Elite Mark and it can be found in the Frozen Brook area of the Paramina Rift. An NPC named Monid will be there, and if Trickster is present, they will tell you. Monid only does this once, so if for some reason you don’t find and defeat Tricker then, any subsequent times you enter you will have to manually check yourself to see if it has spawned. There is a 30% chance of it spawning each time you enter the area.

Trickster runs around very fast and can be hard to spot due to its coloration, with it even seemingly appearing invisible unless you are close enough. Additionally, when fighting the Trickster, it may run away, but it will eventually return and resume its attack.

Be sure to have your party remove Trickster’s Protect by casting Dispel. Once approximately half of its HP is diminished, the fight will be much harder as Trickster will start using Choco-Comet, which deals massive amounts of damage. Spread your party out to reduce the damage done. Additionally, Trickster will become immune to all physical attacks and you will have to use Magick. The problem is, it is only vulnerable to one element at a time, and this changes each time you successfully use the right element. Bio, Drain, and Scourge worked here for the original release, but for the Zodiac version only Balance still works.

After you’ve defeated Trickster, return to Gurdy to claim your reward of 4,800 Gil and Deimos Clay loot. 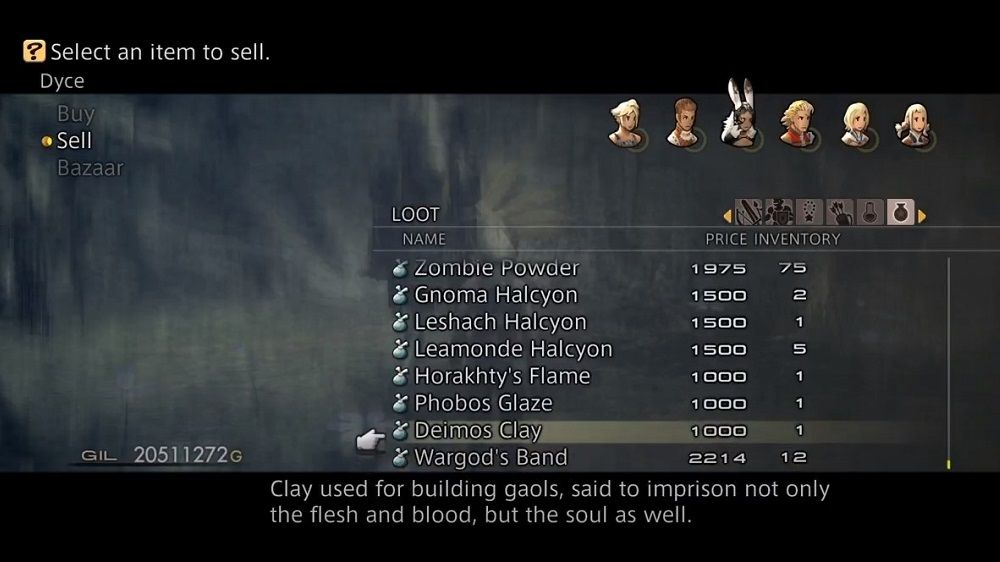 Now that you have the Phobos Glaze, Horakhty’s Flame, and Demimos Clay items from your hunts, you need to sell them at a vendor. Once you leave the sale menu, you will receive a notification that new bazaar goods are available. 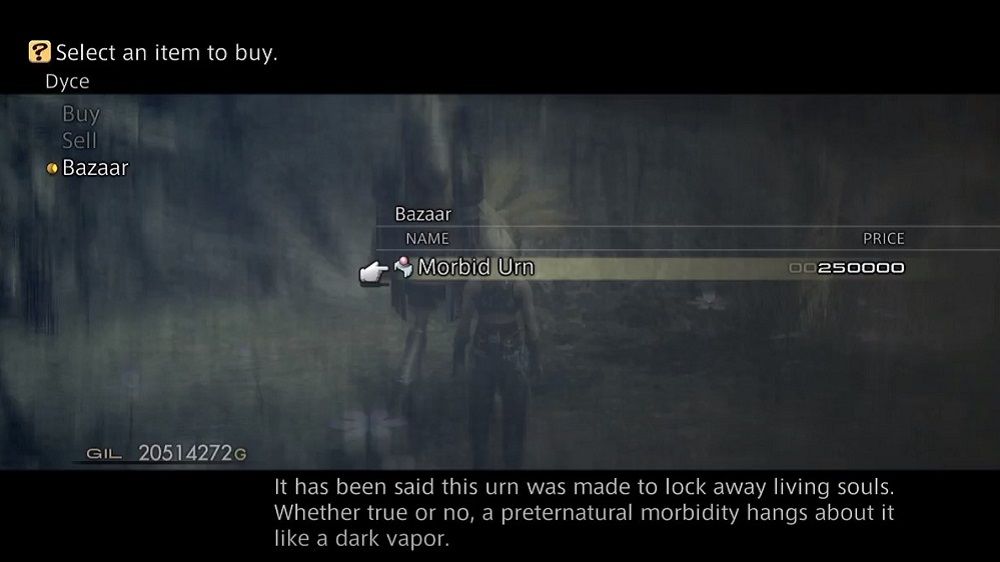 Enter the Bazaar menu to see that the Morbid Urn is now available for the price of 250,000 Gil. Once you purchase it, you will be notified that you have received a Canopic Jar and the “Collector” accolade will unlock. Having the Canopic Jar in your inventory will make enemies drop Arcana or High Arcana depending on the enemy type.

Next: Final Fantasy 12: How To Get The Barheim Key 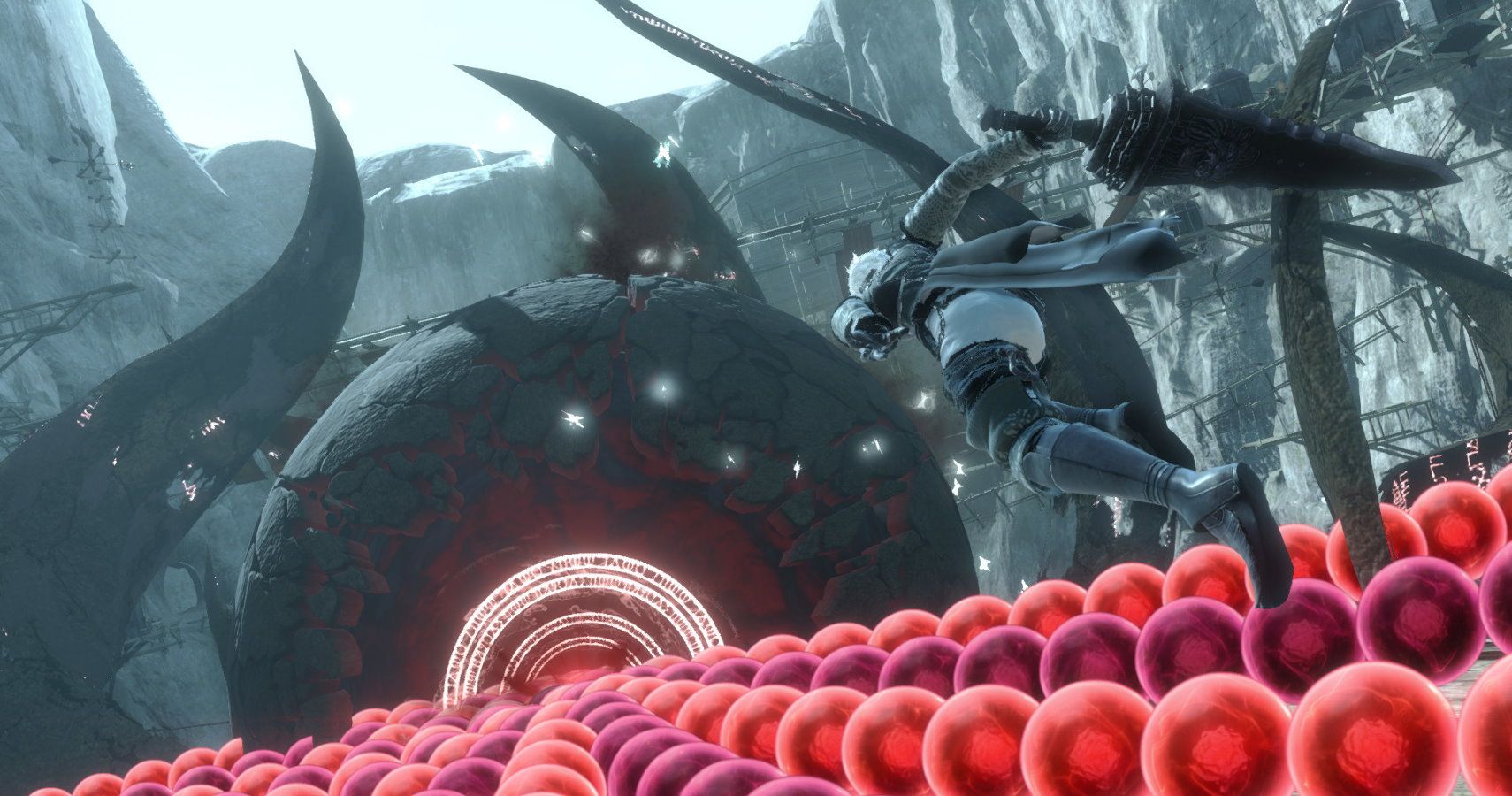 Meg appreciates gaming on all formats, but primarily spends her time achievement hunting to the extreme. Her passion for gaming began as a child, when first introduced to the Amstrad. A collector of gaming consoles past and present, Meg spends as much of her time rediscovering old classics as she does playing the latest releases.

What’s the point of PlayStation when you have a PC? – Reader's Feature