Glamour is the real endgame. Final Fantasy 14 has gone from strength to strength since its original release. With the Endwalker expansion causing unprecedented server congestion, Square-Enix’s MMO has never been more popular. However, this raises an important question: With millions of Warriors of Light fighting evil across the world, how are you going to stand out?

Take heart, adventurers: Thanks to Final Fantasy 14’s glamour system, whether you’re a newly minted sprout or a veteran adventurer, there are more amazing looks out there than you can shake a moogle at (some of which pop up in seasonal events). Some of them are rather underappreciated and elusive, but they remain fantastic options.Be warned: spoilers ahead for every expansion up to, but not including, Endwalker. 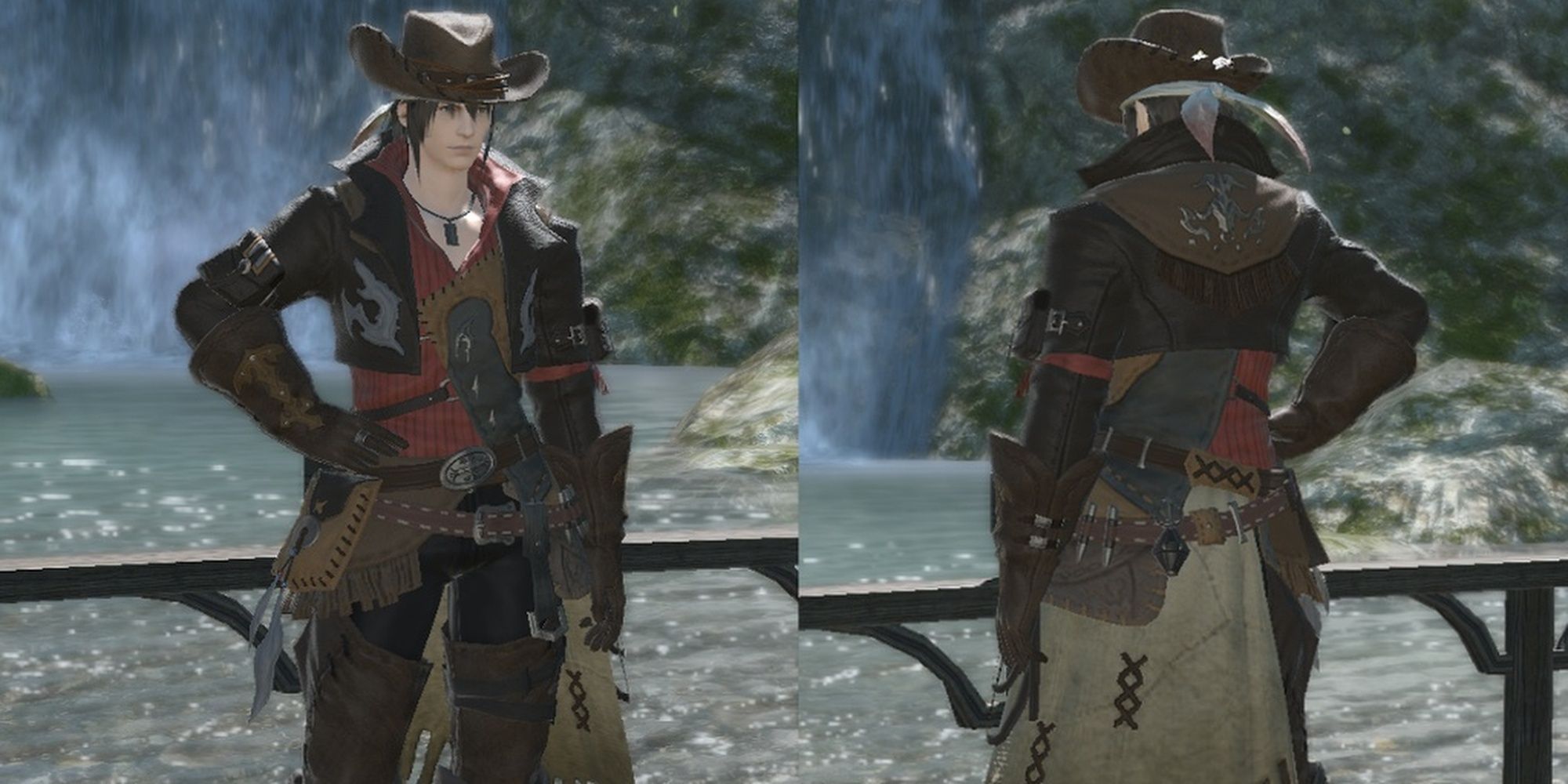 Do you want to look like the rootin’, tootin’ JRPG revolver-wielder of your dreams? Look no further than the Wrangler set. Found in Sohr Khai and Hullbreaker Isle (Hard), this glamour will give you a hard bitten John Marston look (there are certainly some great outfits available to him in Red Dead Redemption 2) that’ll be the envy of your Free Company.

You’ll need to be level 60 to hit the dungeons where this set can be found, but with a solid group you’ll be able to put together this set in no time. At higher levels, you can even run the dungeons solo and unsynced if you’d prefer to acquire the Wrangler set on your lonesome. 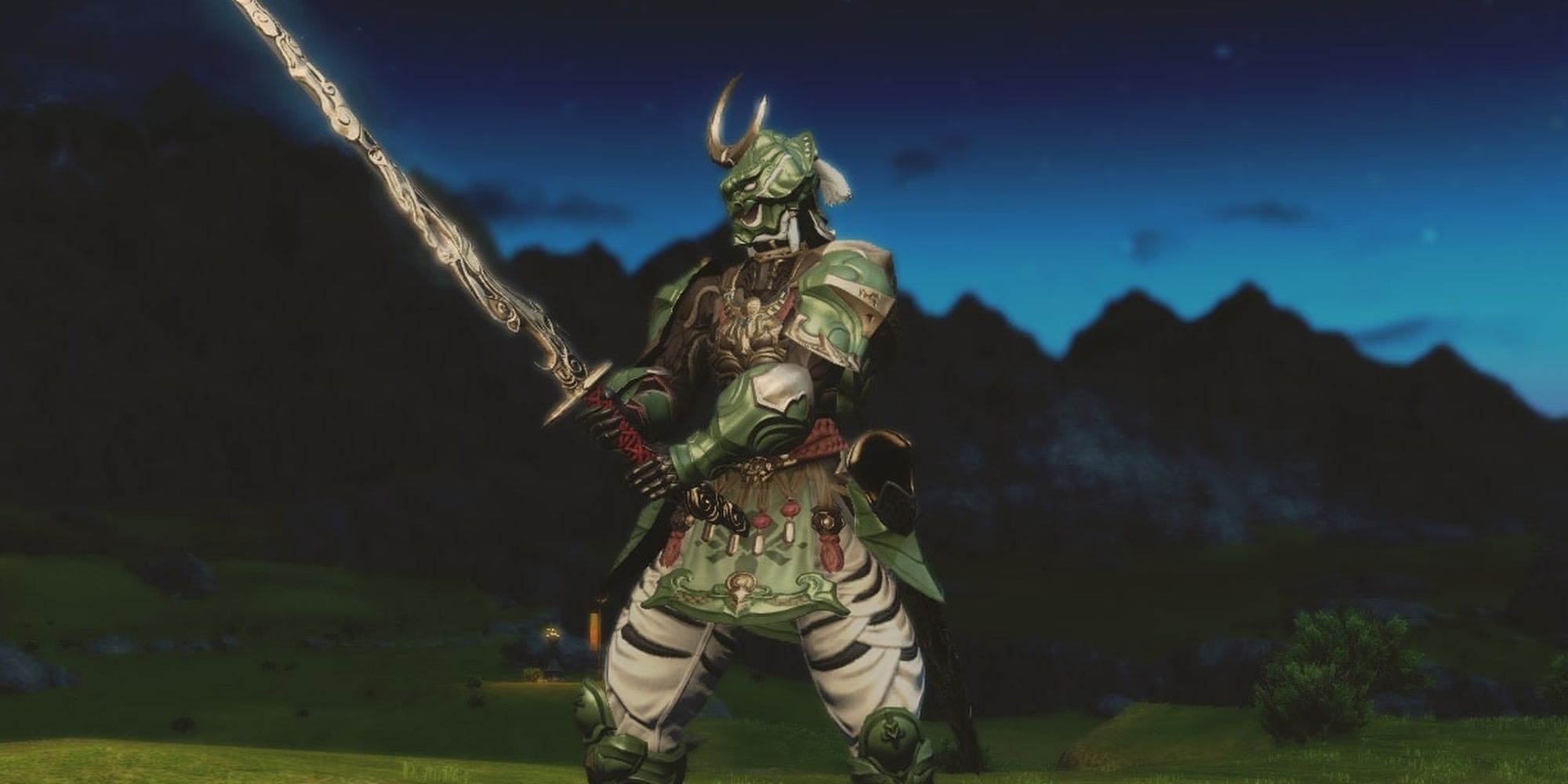 The 1990s' turtle warrior aesthetic is back. Introduced in the Stormblood expansion, the Kojin are an aquatic beast tribe who offer assistance to the Warrior of Light during their time in the East. Once you finish their part of the story, you can start taking on daily quests for the Kojin.

Do enough, and you’ll reach the rank of ‘Sworn’. Then, trade the Kojin Sango you’ve earned to Shikitah in Rasen Kaikyo for your reward. That glorious turtle armour will be yours in no time, and it's well worth the time investment. 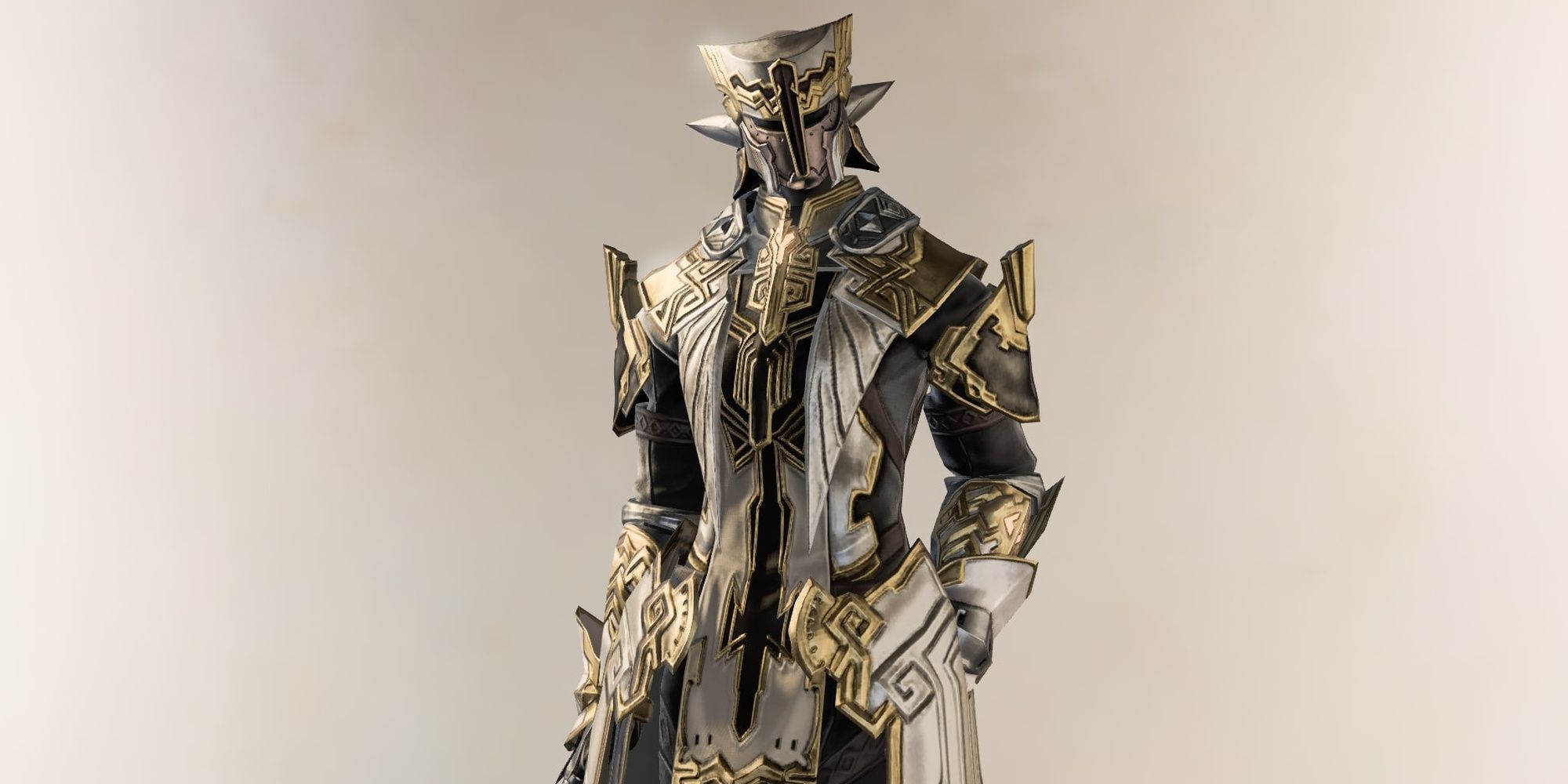 Shadowbringers brought fans a whole new world to explore. The First is full of lore and ancient secrets, and the mysteries of Ronka are some of the most interesting. Back in the day, you could buy this gear with Tomestones.

Now, however, the only way to acquire this historic raiment is to acquire Sacks of Nuts through monster hunts in Shadowbringers or Endwalker. Take these nuts to Ilfroy in Eulmore or Xylle in the Crystarium to trade them for Ronkan armour and weapons. The set may have been forgotten, being trickier to acquire than ever, but it's a great look. 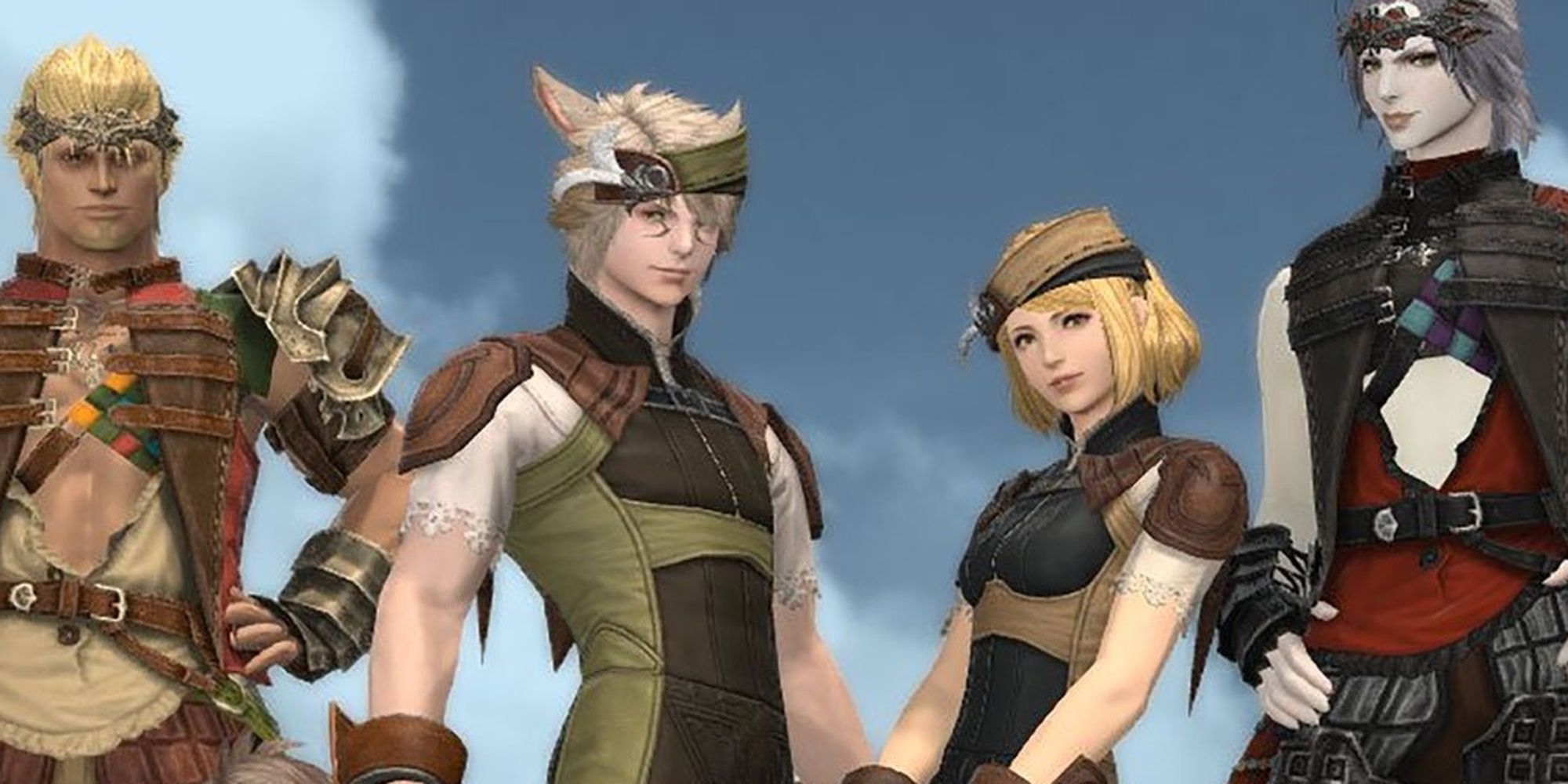 Love it or hate it, you can’t deny that Final Fantasy 12 had some seriously iconic characters. If you want to put together your very own Basch von Ronsenburg cosplay, then you’re in luck. At the very end of Shadowbringers’ ‘Save the Queen’ arc, after fighting through Zadnor, you unlock the Dalraida scenario – an excellent, large scale instance well worth doing just for the gripping storyline.

Complete the Dalraida journey and you’ll obtain some Bozjan Platinum Coins. Trade these to the Resistance Supplier in Zadnor, and you’ll be well on your way to completing one of Final Fantasy 12’s classic looks. 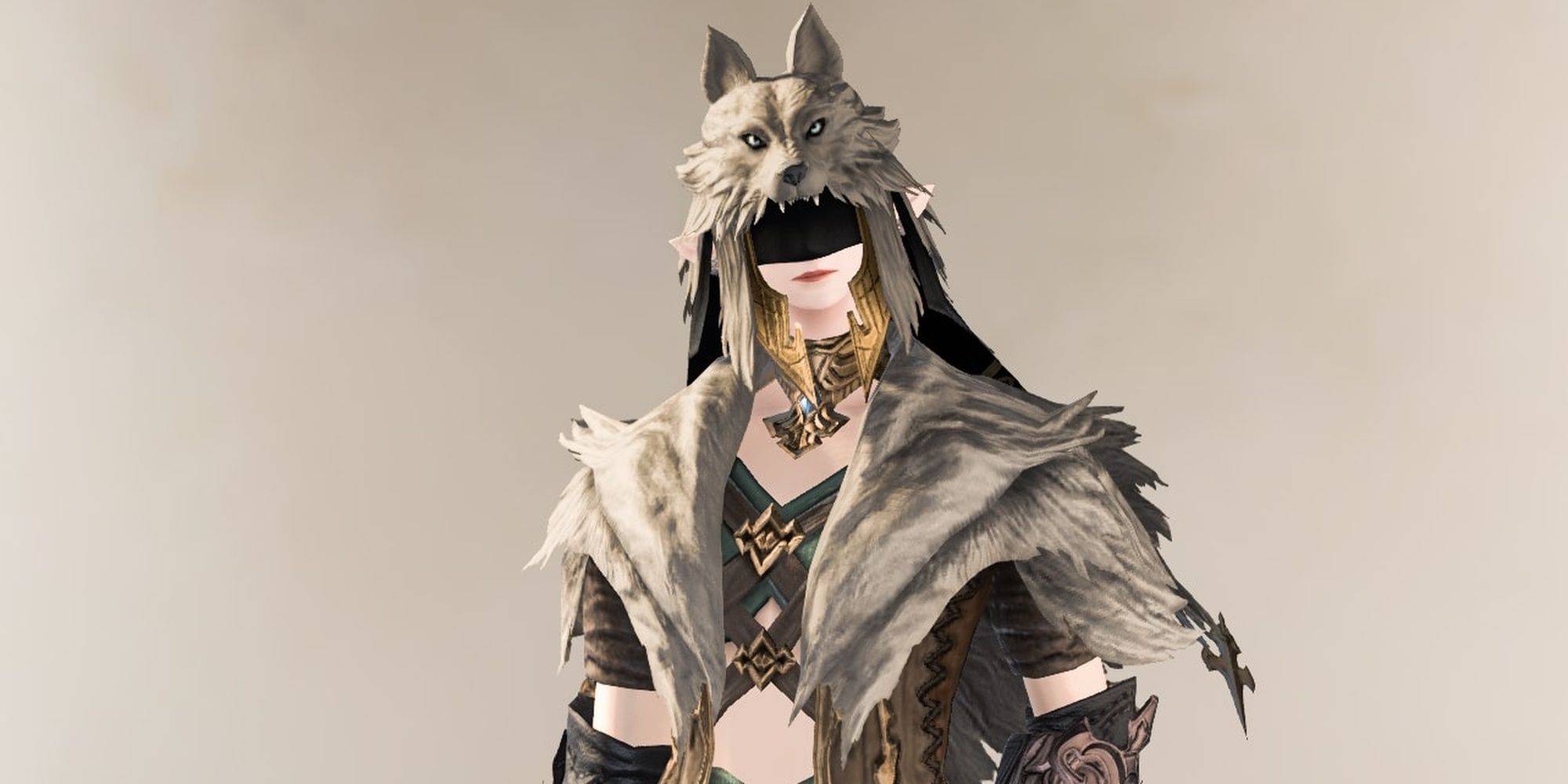 An underrated and overlooked set obtained from The Grand Cosmos, the Warg aesthetic will put you at the head of the pack. Unlocked in Shadowbringers, The Grand Cosmos saw our heroes venture to distant lands to seek the help of a talented sorcerer. What they didn’t expect to find was one of the most vicious and iconic armor sets out there.

Even at level 90, you’ll still need a group to clear The Grand Cosmos reliably and quickly. However, if you can find friends, The Warg set will soon be yours. 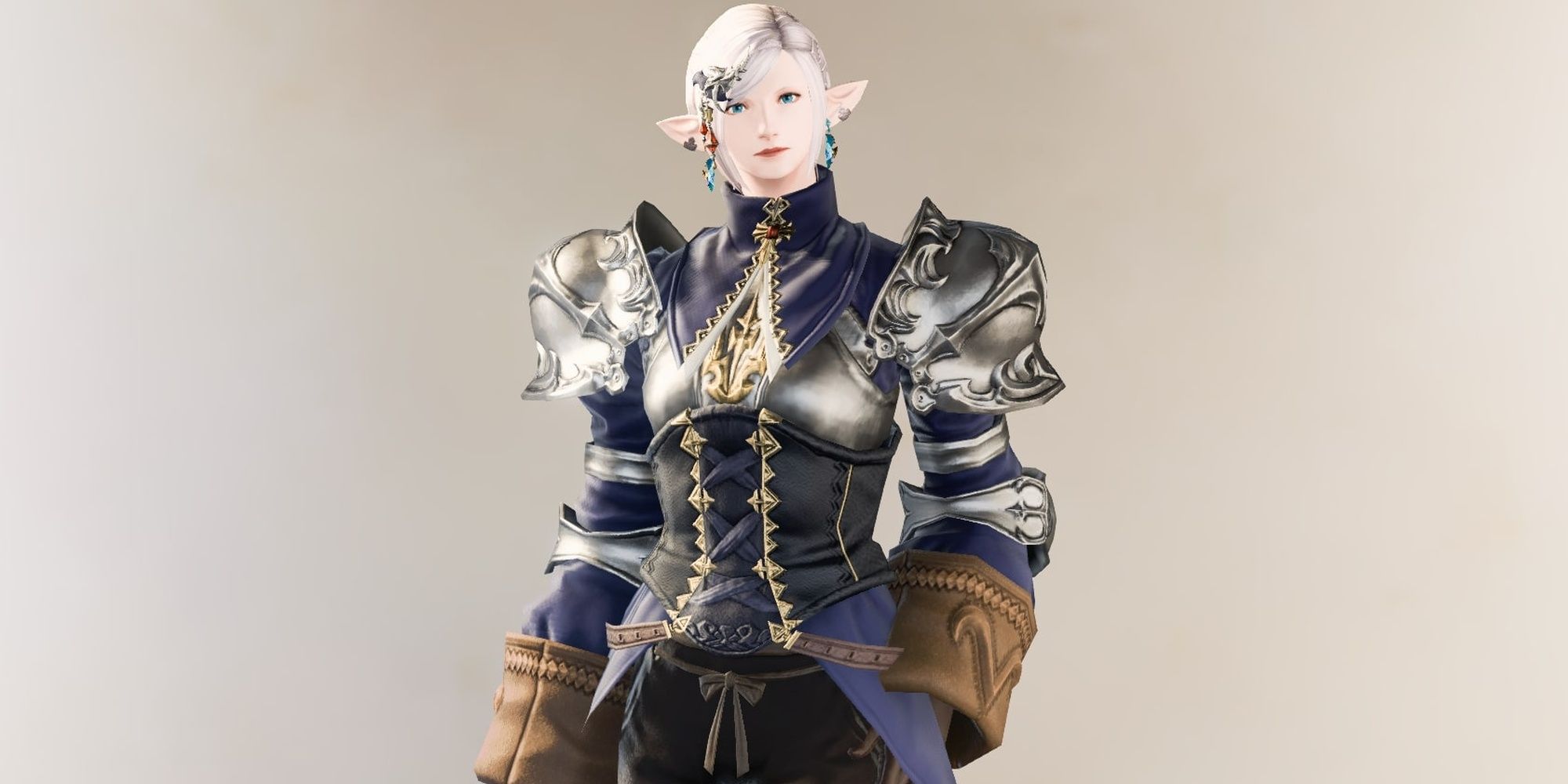 Final Fantasy Tactics was a genre-defining entry in the series, bringing turn-based tactical combat reminiscent of Dungeons and Dragons into the JRPG genre. The Ivalice Alliance Raid series in Stormblood saw a return to the world of Final Fantasy Tactics, as well as the unique high-fantasy aesthetic of its holy knights and formidable warriors.

All three entries in the Ivalice Raid will allow you to acquire gear inspired by Tactics’ inspired cast of varied characters. Once you’ve finished the Stormblood storyline, speak with Keiten in Kugane to begin unlocking these classic raids. 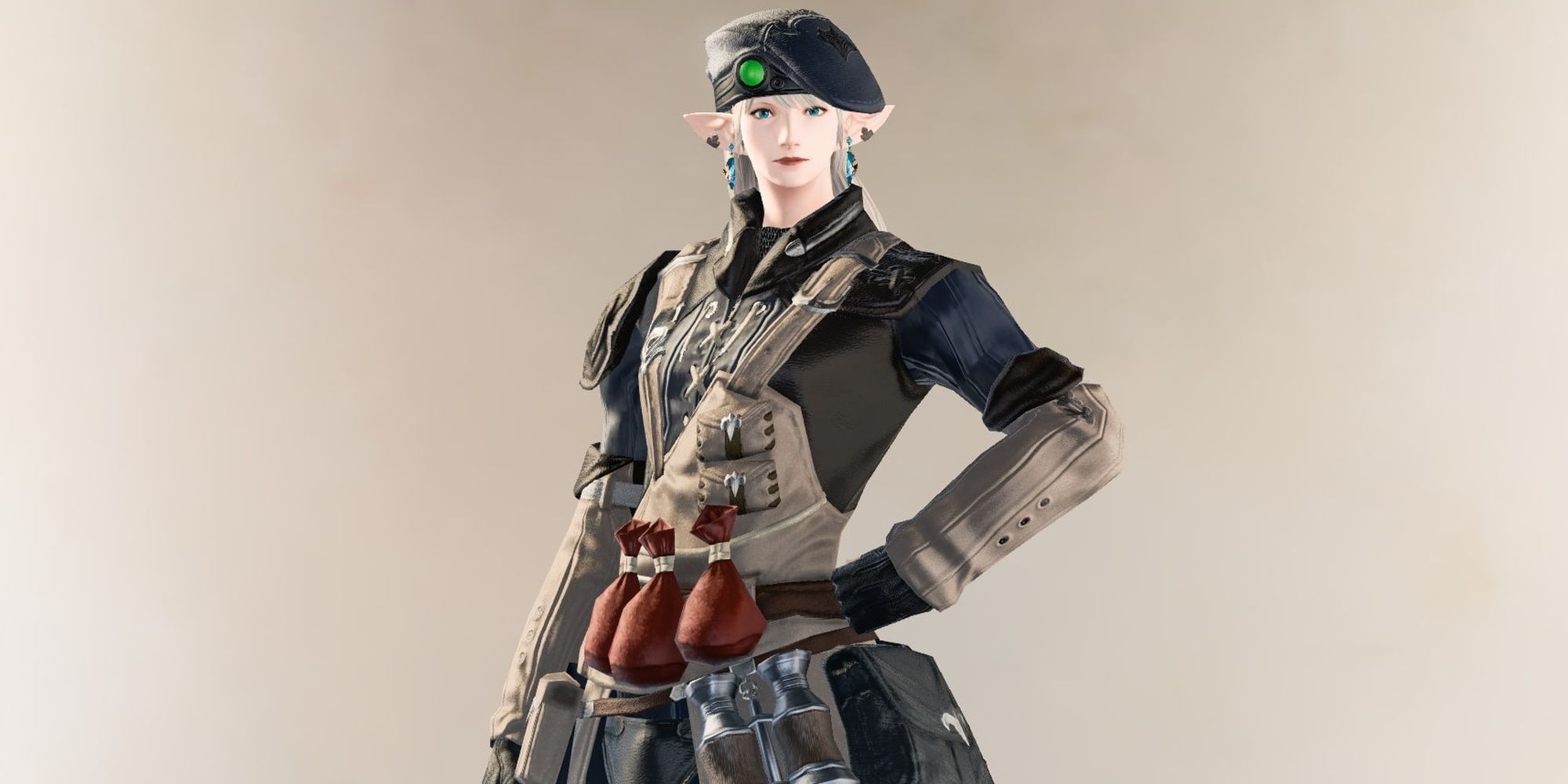 A subtle but striking aesthetic, the Royal Volunteer set offers a militaristic and practical look, in keeping with Stormblood’s narrative emphasis on warfare and its costs. The healer variant even boasts a gas mask, which makes for a particularly bold fashion choice.

To find this gear, you’ll need to go to The Burn or Saint Mocianne's Arboretum (Hard); a pair of surprisingly tricky level 70 dungeons. Both are unlocked during the latter parts of the Stormblood storyline, though the Arboretum must be discovered through the “Secret of the Ooze” quest in Rhalgar’s Reach. 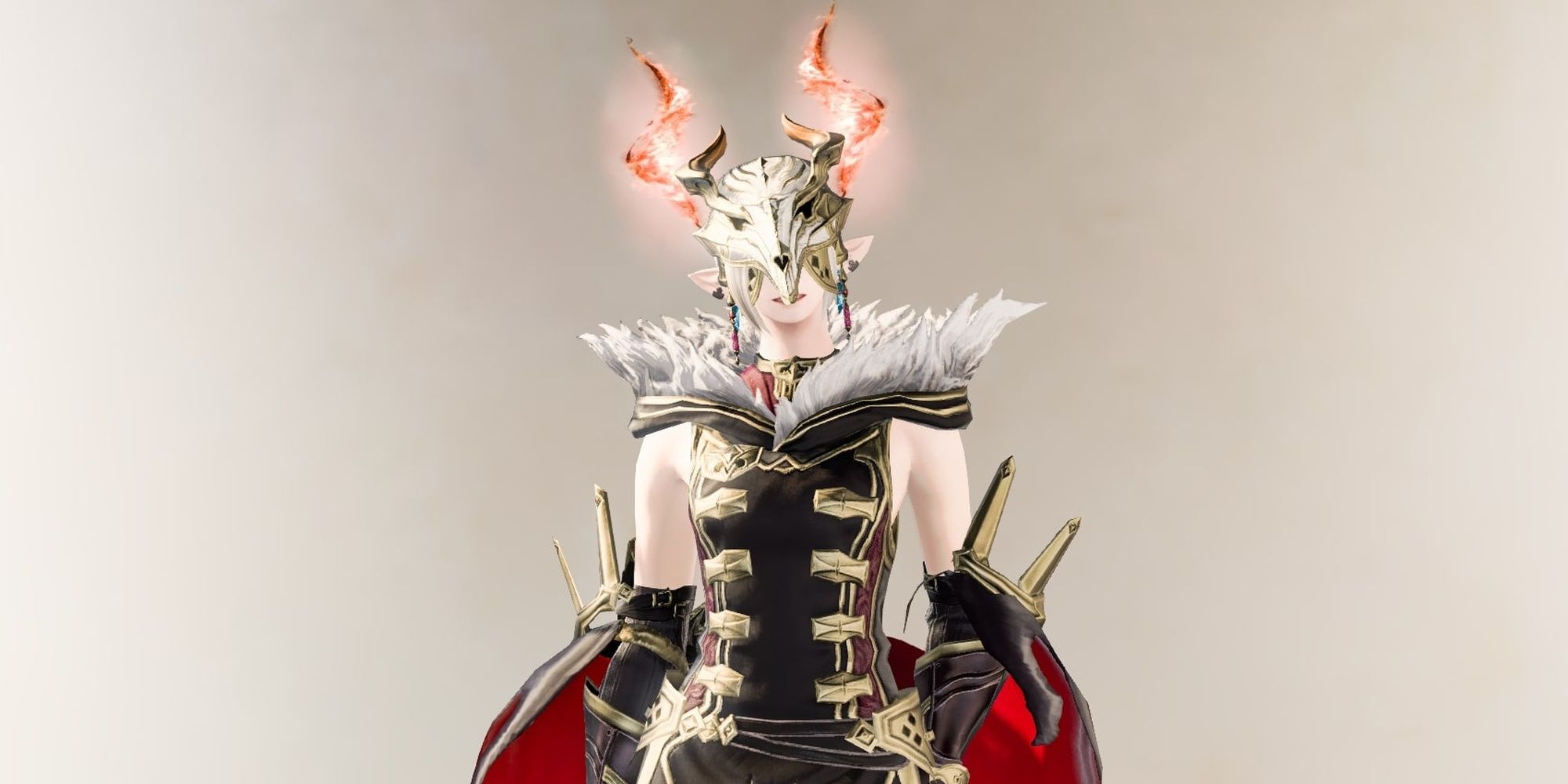 If you’re a fan of dark, skull-based aesthetics, then get ready for your fashion dreams to become reality. Unlocked at level 70 as part of the quest arc The Four Lords, The Swallow’s Compass is a fan favourite dungeon, incorporating themes and narrative beats from Chinese mythology to create a unique and memorable PvE experience.

It’s also the home of the Bonewicca gear – a set so iconic that the developers reused it in the first dungeon of the Endwalker expansion. If you can fight your way past the Monkey King, this edgy and striking look can be yours. 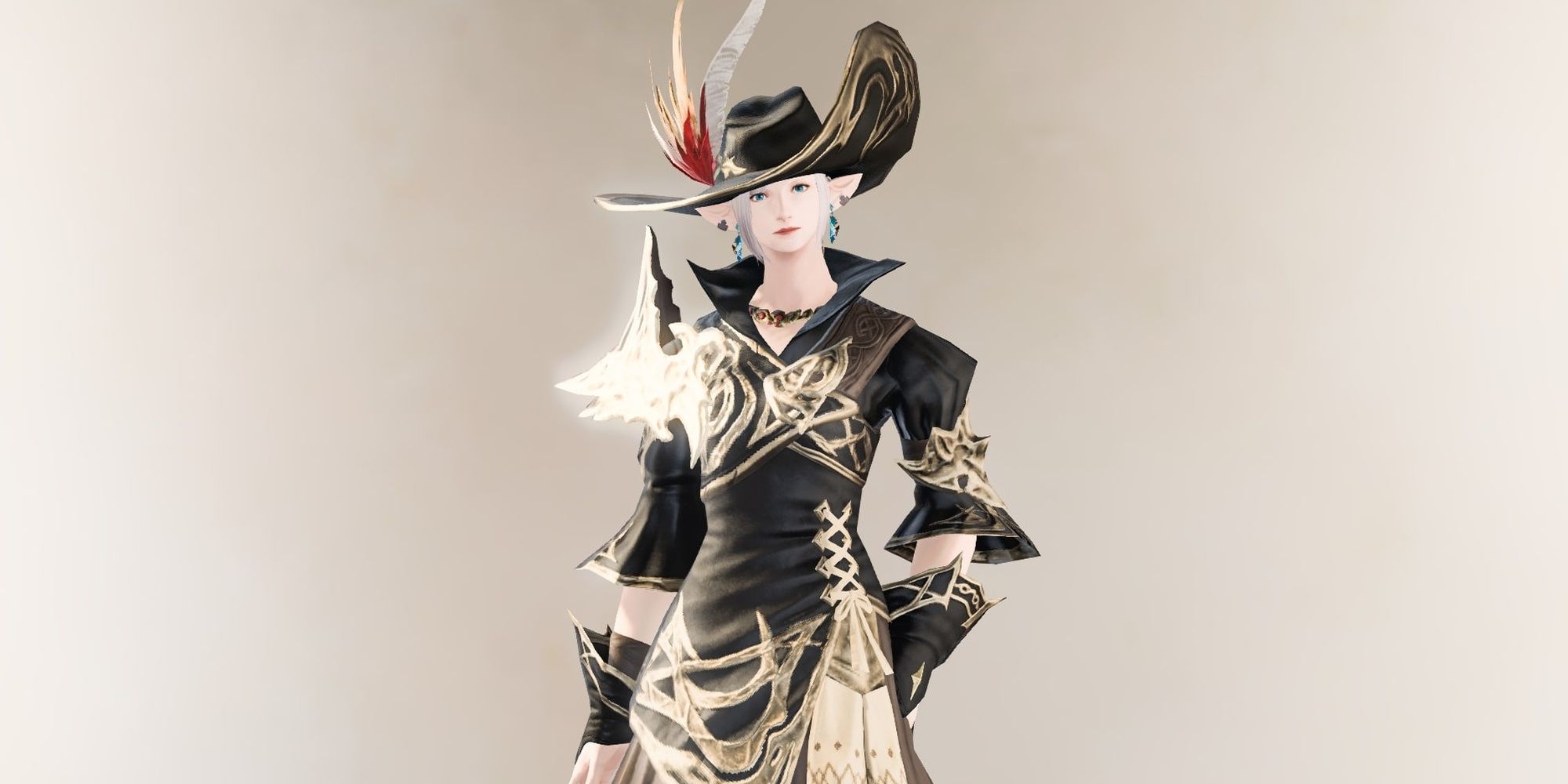 The battle with Lord Vauthry is certainly one of the more climactic moments of Shadowbringers, but in order to reach the final Lightwarden, our heroes must make the climb to the summit of Mount Gulg.

A gripping dungeon experience in its own right, Gulg is also the place where an enterprising Warrior of Light might be able to get their hands on gearset The Forgiven. Lathered in that unsettling Sin Eater aesthetic, The Forgiven set offers a stark visual reminder of the trials and tribulations that Shadowbringers had to offer. 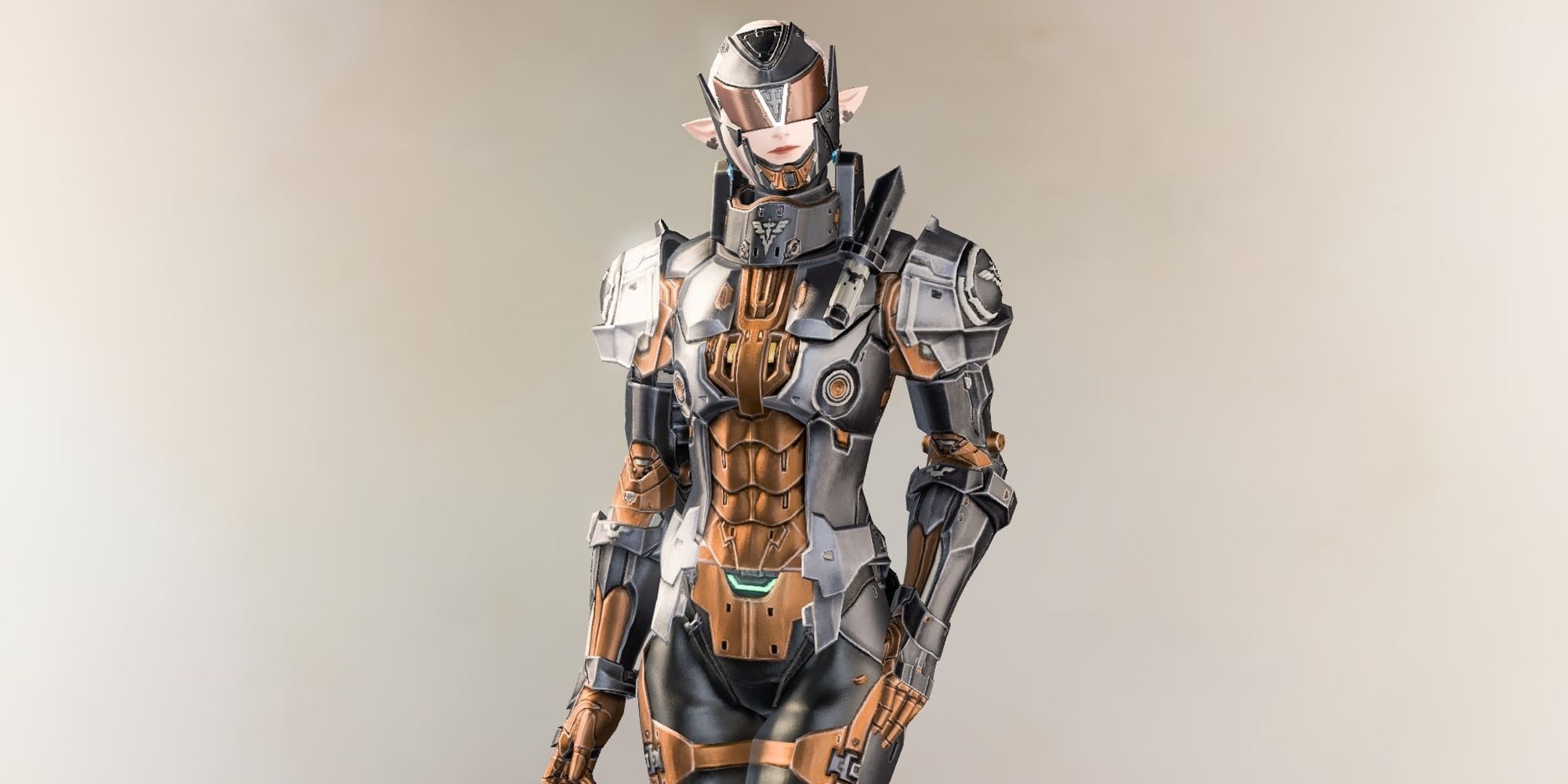 No JRPG would be complete without a metallic, futuristic armor set reminiscent of a certain cyborg ninja from Metal Gear Solid. In order to get your hands on this set, you’ll need to acquire Wolf Marks through Final Fantasy 14’s PvP system.

The most efficient way to acquire them is to complete the Frontline daily roulette. This can be unlocked by completing Like Civilised Men and Women, a quest available from the headquarters of whichever Grand Company you chose to join. You’ll need to be level 30 to unlock Frontlines, and you’ll also need to have completed A Pup No Longer (available in the same location) to get access to the Wolves’ Den and its PvP gear vendors. Gather those Wolf Marks, and you’ll be the envy of your friends in no time.