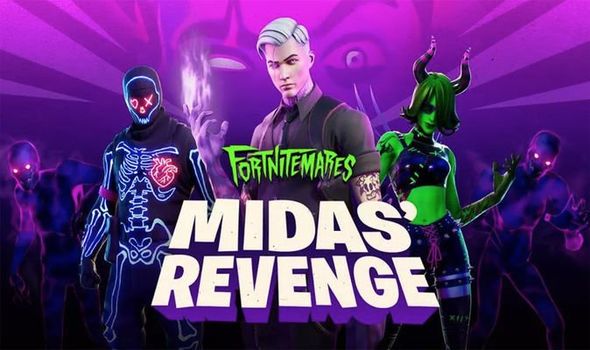 Fortnite developer Epic Games is getting ready to release update 14.40 on PS4, Xbox One, PC, Nintendo Switch and Android.

The new Fortnite update has an October 21 release date and a 9am BST launch time for fans playing in the UK.

Needless to say, update 14.40 – which is shaping up to be a big one – will be accompanied by a period of server downtime and a lengthy list of patch notes (below).

While there’s no official downtime schedule, the servers are likely to come back online at around 11am BST.

“Please note the patch size will be larger than normal on PC (approx. 27 GB).

“This is to make optimisations on PC resulting in a massively reduced Fortnite file size (over 60 GB smaller), smaller downloads for future patches, and improved loading performance.”

As the tweet suggests, the new Fortnite update will lay the foundations for the 2020 Fortnitemares event.

Based on previous leaks, Zombie Husks will return to the Battle Royale map, alongside Broomsticks, consumable Candy, and a whole host of Halloween-themed skins.

Other leaks suggest Midas will make a return to the Fortnite map, along with some ghostly henchmen.

Midas and his ghostly henchmen will reportedly be located in The Authority. No doubt there will be some kind of challenge associated with his appearance.

As you can see from the update 14.40 patch notes below, the new download will also make a wide variety of gameplay tweaks and bug fixes.

This includes a fix for an issue with Doctor Doom’s Mystical Bomb, as well as an annoying problem with the order items are listed in Team Rumble.

You can see the full list of update 14.40 Fortnite patch notes below…

– Due to an issue, the Honey Hatchets pickaxe has been temporarily disabled and cannot be equipped in the Locker. This will be re-enabled in a future update.

– We’re investigating an issue that is causing the Cozy Chomps and Ravage Outfits to display as Ramirez while in the Lobby and in a match.

• THWIP! Legacy not being awarded.

– The THWIP! Legacy isn’t awarded after meeting its requirement (immediately eliminate an opponent after pulling them with a Harpoon Gun during Season 4).

– After players respawn in Team Rumble, their items may switch positions in the inventory to the order they were initially picked up in.

– Due to an issue, Doctor Doom’s Mystical Bomb has been temporarily disabled in competitive playlists.

– If a player is not given matchmaking permissions, they will not be able to access the Team Size setting.

• Sky color does not change when adjusting light color setting.

– Sky color does not change when adjusting the light color setting in the island settings. This will be resolved in the next update.

– Fog thickness and lighting were unintentionally changed in the v14.30 update. This will be resolved in a future update

– We’re aware of an issue that is causing vehicle buttons to appear missing on mobile.

– Silver/Gold foil style variants for Mystique and Doctor Doom may appear with a black texture on Nintendo Switch.

– We’re investigating the reports of crashing after the most recent STW Update. This mostly occurs when attempting to load into or leave a mission

• Epic Mini-Boss’ not spawning in ‘Trap The Storm’ missions.

– The Epic Mini-Boss may not spawn during the second wave of ‘Trap The Storm’ missions with the appropriate modifier. Avoid this mission if you have a quest that requires you to eliminate Mini-bosses.