FromSoftware makes good games. Tolkien wrote good stories. That’s the pitch. Someone please make this happen. Anyone. Oh, you want some more than that? Fine. But I warn you now, this is basically everything that it boils down to.

I could never get into Soulsbornes before Elden Ring, but I still understood that their lore was both unique and dense. As such, I sought out lore explainers on YouTube and asked my friends for the lowdown on exactly why they perpetuated the Age of Fire at the end of Dark Souls. Elden Ring’s open world structure has allowed me to experience FromSoftware’s storytelling firsthand for the first time. Before this, I’d only seen the opening cinematics of the first Dark Souls for myself, as well as various other bits and pieces online that are unavoidable when your job is writing about video games.

Elden Ring made its mark on me like it did so many people. I’ve not even had the time to finish it yet, and I’m wishing for sequels and new games, counting down the days until FromSoftware announces yet another title. I’m not ready to attempt Dark Souls again, I like wandering off too much in Elden Ring, so I’m calling for FromSoftware to announce – and then make – a Lord of the Rings game. 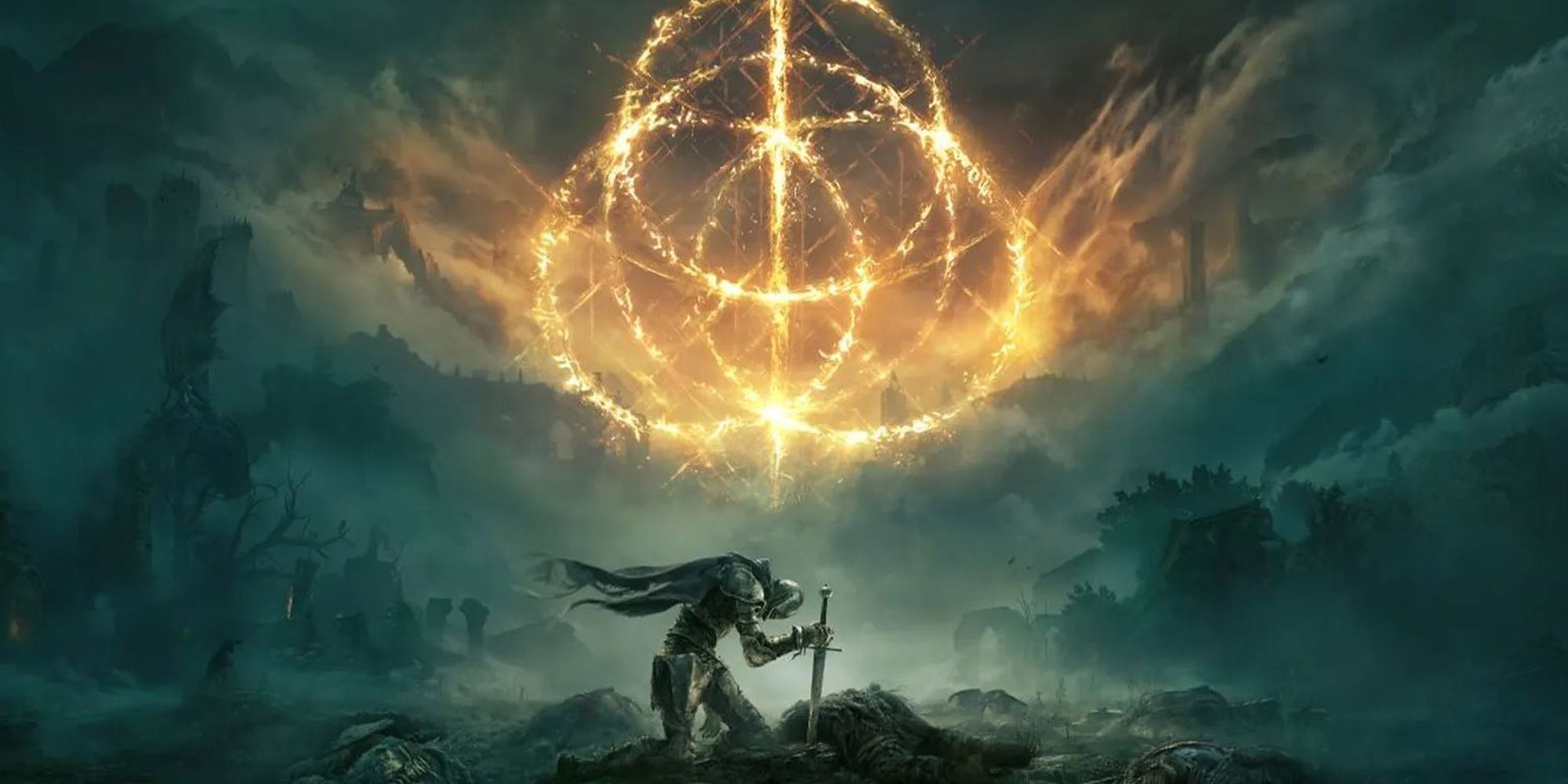 The two are a match made in heaven. Think about it. Worlds steeped in mysterious fantasy lore, but made somewhat unapproachable through either archaic language or hard-as-nails fights. Stories in which you feel like you’re just a small guy doing small tasks, but who eventually overcomes the power of the gods. I know they’re not gods in Dark Souls or the Lord of the Rings, but I’m using hyperbole for effect.

To get it out the way, I’m not talking like George R. R. Martin's involvement in Elden Ring. I know he wrote some of the lore or whatever, but it’s not a translation of one of his existing stories. I want a fully licensed Lord of the Rings game that has the gameplay of Elden Ring with the mind of Tolkien behind it. It’s about time we had a decent Lord of the Rings game, anyway; there’s only so many orcs a man can kill by way of Assassin’s Creed-esque stealth kills in Shadow of War.

“But Ben,” I hear you wail. “What about Hidetaka Miyazaki and his delightfully grotesque monsters? It can’t be a Soulsborne without his devilish mind!” You’d be right in some respects, Miyazaki’s imagination is a core part of what makes Soulsbornes the way they are. But you’d be wrong in thinking that Tolkien can’t be grisly. 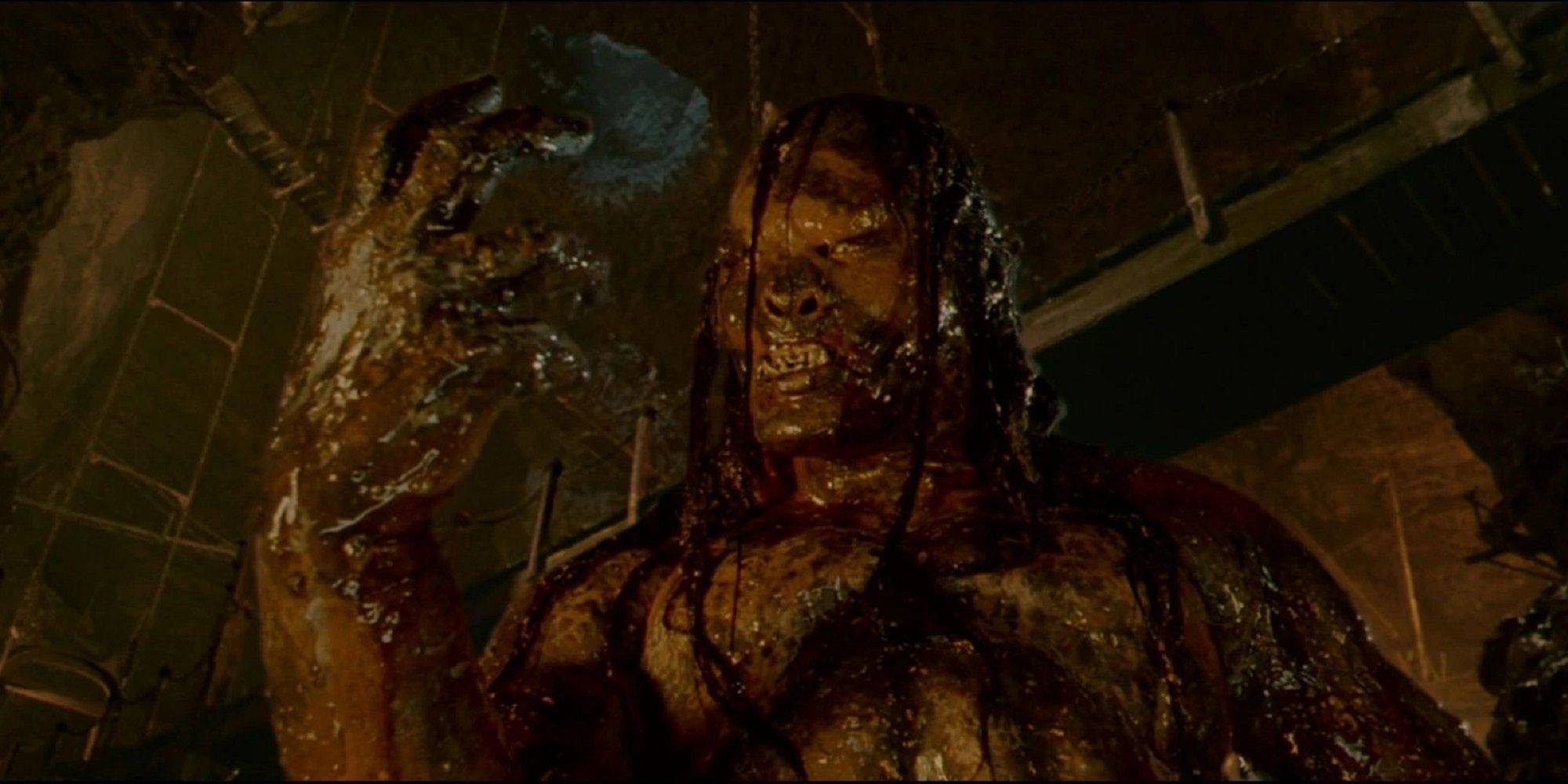 It’s fine – you’re likely suffering from the Jacksonian knee-jerk effect, and all that comes to mind is the Jackson/Walsh trilogy when you think Rings. In The Two Towers, Tolkien describes four particularly ugly orcs as “swart, slant-eyed, with thick legs and large hands.” He regularly refers to their “yellow fangs” and the fact that their long arms “that hung almost to the ground.” Dispelling the film trilogy from your memory, the descriptions bring to mind more traditional goblins, and gruesome ones at that.

Countless fan artists have depicted alternative orcs far more fearsome – and considerably less human – than Jackson and Walsh’s version. Are you suggesting that Miyazaki couldn’t work wonders with those descriptions? I’m sure he’d love to play around with the idea – which Tolkien flirted with but never committed to – that orcs are corrupted Elves. Remember his famous quote about getting his artist to convey, “the deep sorrow of a magnificent beast doomed to a slow and possibly endless descent into ruin”? Imagine that, but on the Elf-to-orc corruption pipeline.

Even if you don’t think orcs can be elevated above the fantasy trope, Tolkien leaves plenty of room for imagination. What are the “fell beings of shadow” that accompany orcs and Wargs? Miyazaki would have a field day filling in the gaps that Tolkien intentionally left empty with his dark creations. 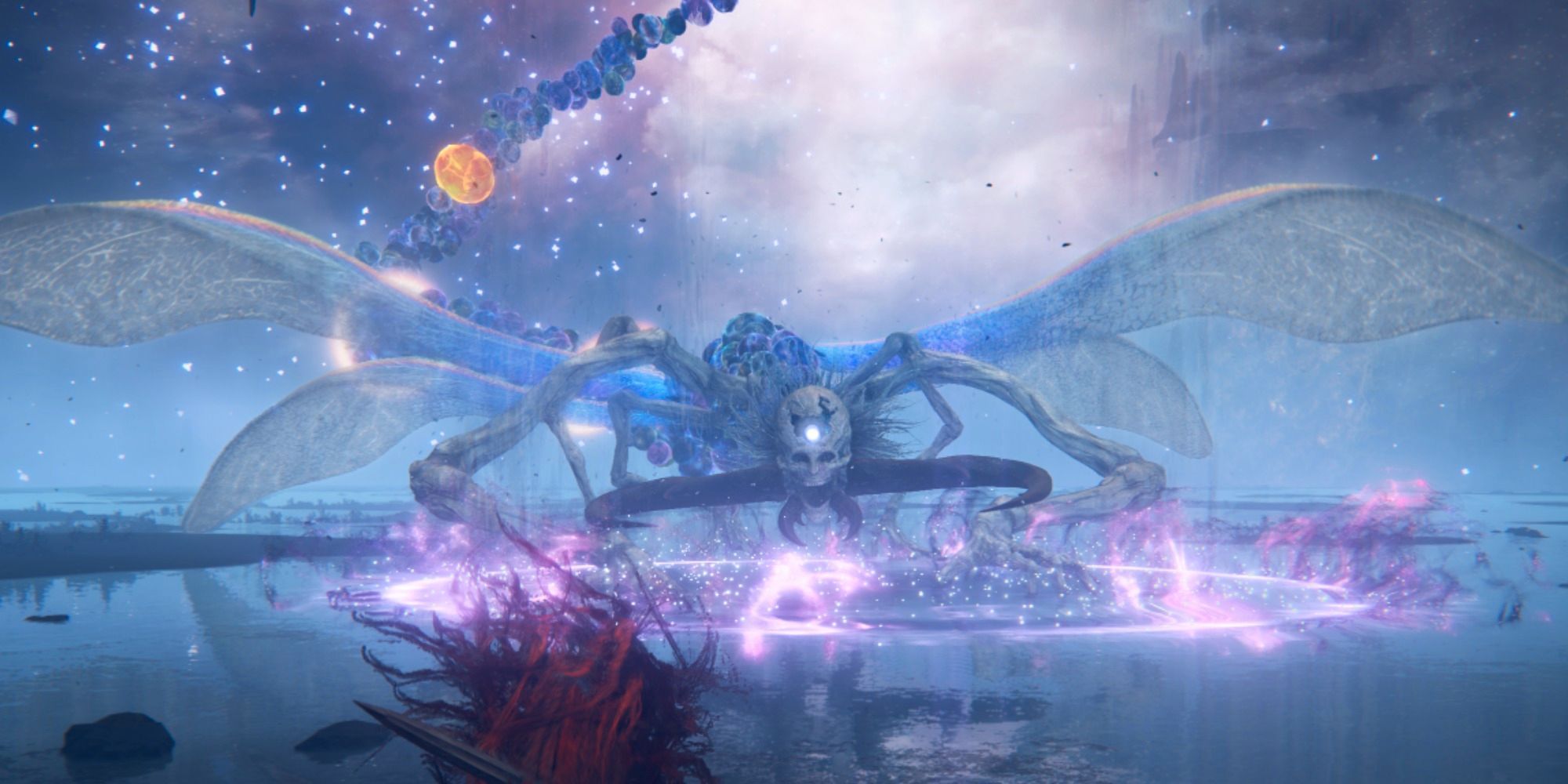 But there are plenty of characters who are primed to get the Miyazaki treatment just from their basic descriptions. Ungoliant, Shelob’s mother, a giant spider who towered over mountains and spun webs made of pure Unlight – “in which things seemed to be no more, and eyes could not pierce, for it was void.” This is a creature who had seemingly been created from night itself, and “disowned her Master, desiring to be the mistress of her own lust, taking all things to herself to feed her emptiness.”

But it’s not orcs or Ungoliant that would make the best Lord of the Rings Soulsborne. It’s Fingolfin, or at the very least the plight of the Noldor in Middle-earth. Think about it like this: Fingolfin is already king in Middle-earth, the kinslaying and split between him and Fëanor is all in the past. The race of elves is fractured, your allies wear thin. Yet Morgoth marches forth.

The game could take place as the Elves lay siege on Angband. The siege is ongoing for four hundred years, and Tolkien isn’t definitive in his descriptions of what happens during that time. It’s the perfect purgatory for a Souls game to take place in, where the world is on the cusp of great change and the taint of evil touches every surface. The elves may be mourning the destruction of the plains of Ard-galen, which Morgoth engulfed in rivers of flame. 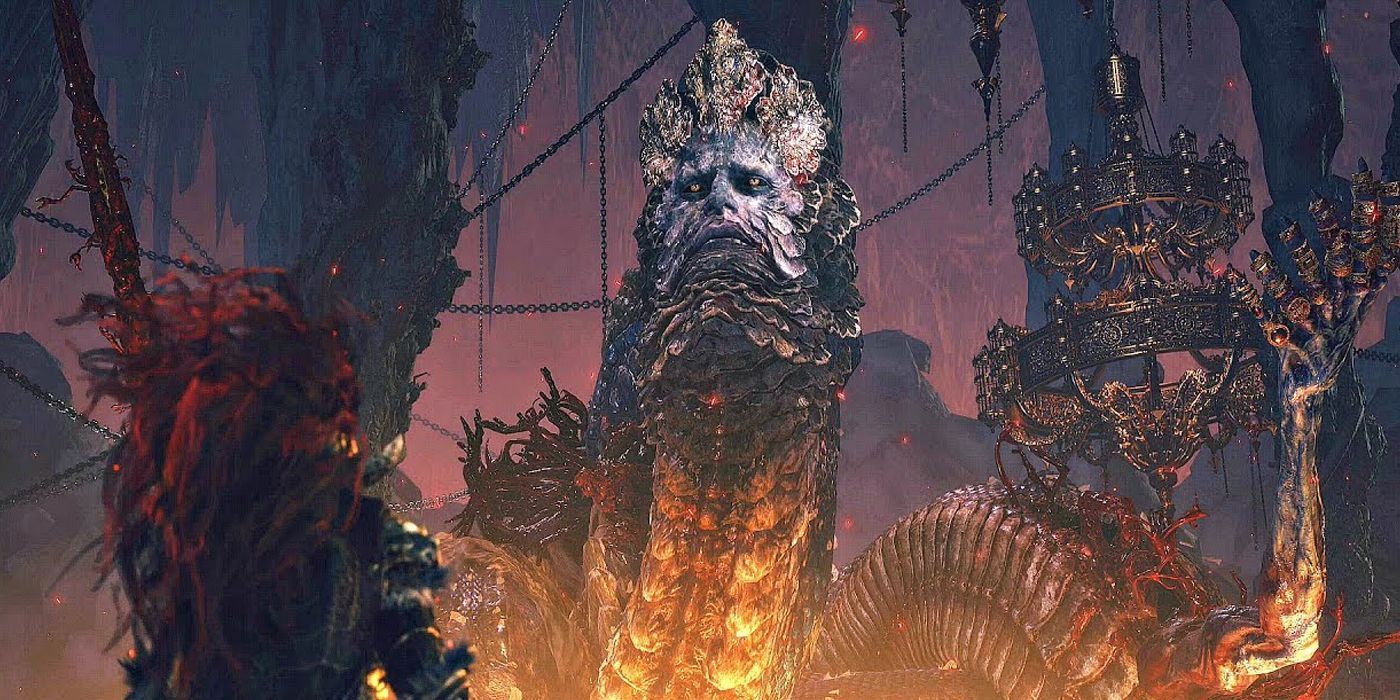 Morgoth is the obvious villain, but perhaps his evil is too black and white for a FromSoftware story. He’d make an excellent final boss, though, an insurmountable foe who you have to wound enough not to beat – that’s not how the story goes – but to sufficiently injure. His minions are perfect bosses, too. Glaurung, the first dragon, who could not fly but could speak and understand others. Sauron himself, Morgoth’s right-hand Maiar and general busybody. It’s feasible that Gothmog, Morgoth’s greatest Balrog, would have been a part of the assault. Don’t tell me you don’t want to see Miyazaki’s take on a Balrog.

Of course, questions of canon come into play. Fingolfin can’t just kill Glaurung and Gothmog. But I’d argue that unwinnable boss battles could create a Souls game that’s more hopeless than ever. Every time you defeat a boss, they fall to their knees but before you can deliver the lethal blow, they summon an army of orcs or slither off to recoup. You may have extinguished Gothmog’s flame for now, but he’ll be back. This represents the hopelessness of your plight, and it would be encapsulated more than ever if the final fight is also unwinnable. 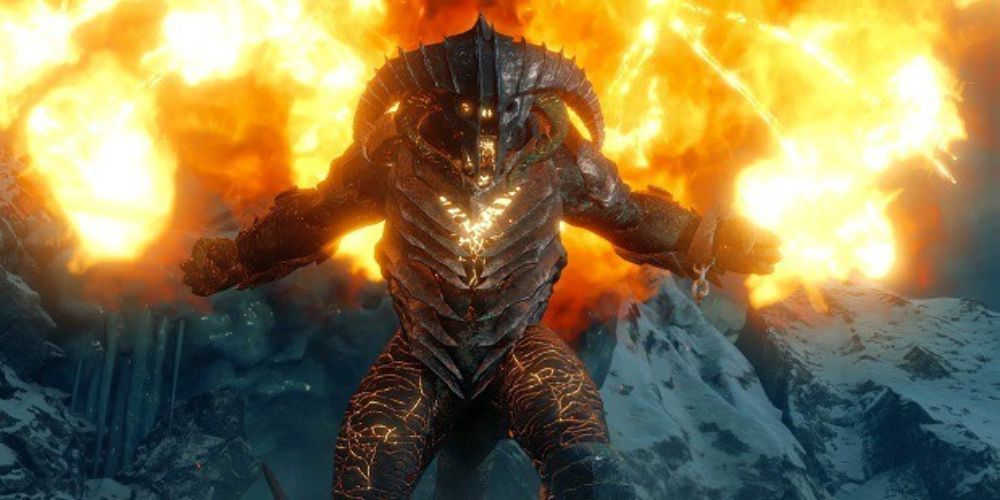 A cutscene plays as you take the last slither of red off Morgoth’s health bar, but instead of showing you beheading him, you stab him in the foot, a painful wound but certainly not fatal. In return, he smites you with Grond, the Hammer of the Underworld. “YOU DIED” appears on your screen. It doesn’t seem fair, but life never is. But this time, you don’t respawn. An eagle, Thorondor, who has potentially helped you on your quest before now, carries your lifeless body to a mountaintop overlooking Gondolin, and your son buries you. Credits roll. Who are you to challenge the might of Morgoth?

What games don’t let you win? I’m sure there’s a few, but a Lord of the Rings FromSoftware game could do it right. Perhaps it would be too unsatisfying. Perhaps the defined rules of Tolkien’s Silmarillion would prove too constrictive for a full game based on Fingolfin. But on the other hand, it might just work. Whether we just see the remnants of the Siege of Angband or Fingolfin’s full journey across the icy Helcaraxë (or even more before that), there’s more than enough material to work with. If nothing else, I can’t get the image of a tiny Fingolfin standing at the gates of Angband alone, challenging the greatest Ainur as “his eyes shone with the rage of the Valar” out of my head. I told you when we started, Tolkien and FromSoftware are a perfect match and I won’t rest until everyone knows it.