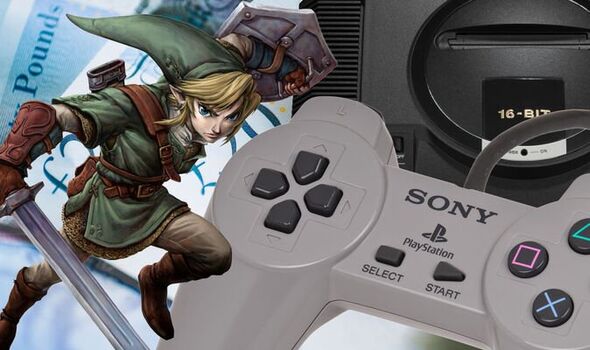 The retro gaming market can be a lucrative place – if you play your cards right – with rare collectibles from the likes of PlayStation, Nintendo and SEGA surging in value. Last year the most expensive video game ever sold, which was a brand new copy of classic NES platform gem Super Mario Bros which sold for a whopping $2million. However, you don’t need to have something as rare as that lying around to make a tidy profit.

PriceCharting – a retro gaming website which tracks how prices change for countless games – has released its latest Hot Items list.

This list shows the in-demand games, consoles, accessories or collectibles that have increased in value the most during the past week.

And unlike with past Hot Items list where some of the top picks were a retro game from decades ago, this time around one of the biggest movers was a recent release.

The game which has experienced the second highest price surge is the Master Edition of Zelda Breath of the Wild.

This limited edition version of the Switch classic – released in 2017 – comes with plenty of extras including a Master Sword model, soundtrack, map and case for the Switch.

According to PriceCharting, a loose version of this has risen in value by over £200 to £345.

This is for the US release of the Zelda Breath of the Wild Limited Edition.

Other US releases that also have experienced a price surge include Keio Flying Squadron for the Sega CD and the Greatest Hits Prime strategy guide for PS1 game Resident Evil Director’s Cut.

While the aforementioned Resident Evil strategy guide is worth £436, which is over a £50 increase on its previous price.

If you don’t have any imports in your collection, then you may be wondering what UK or European releases have gone up in value.

The titles you will want to look out for include the Nightmare Edition of Bloodborne (now worth £267.46) for the PS4 and the Drakengard 3 Collector’s Edition for the PS3 (£278.13).

If you’re wondering what games have increased in value recently, you can find the top movers for the US followed by UK and Europe (PAL).

Just bear in mind that below prices are for loose versions of a game, with complete in box (i.e has game, box, manual, inserts)n and brand new sealed prices being completely different.