The Canthan maps in Guild Wars 2 irresistibly envelop the player. When you set foot in the first region, Seitung Province, every tree and bush and building is bursting with colour and clamouring for your attention. Birdsong is on the wind, pink petals are floating through the air, and, somewhere past the houses, fishemen can be overheard gossipping the waves slap against the docks. It’s clear that the natural splendor of this place has been lovingly ended to for generations.

And all of those generations are looking at you. You’re the fox in the henhouse, the traveller with a story to tell, the sign that something worse is on the way – depending on who you ask. Whatever you are, you’re new. All eyes are on you.

So, Commander, what do your eyes notice? The holographic woman reporting the news? The unfamiliar robots patrolling the streets? The size of Detective Rama’s hat?

It couldn’t be more obvious, Toto… We’re not in Kansas anymore.

“That’s always been a key component of the Guild Wars franchise: really giving the players a sense that these are lived-in places. That these characters and creatures really inhabit this world. The player is able to enter into this environment and see it for what it is,” Justin Fawcett, a 3D environment artist on Guild Wars 2, tells me. 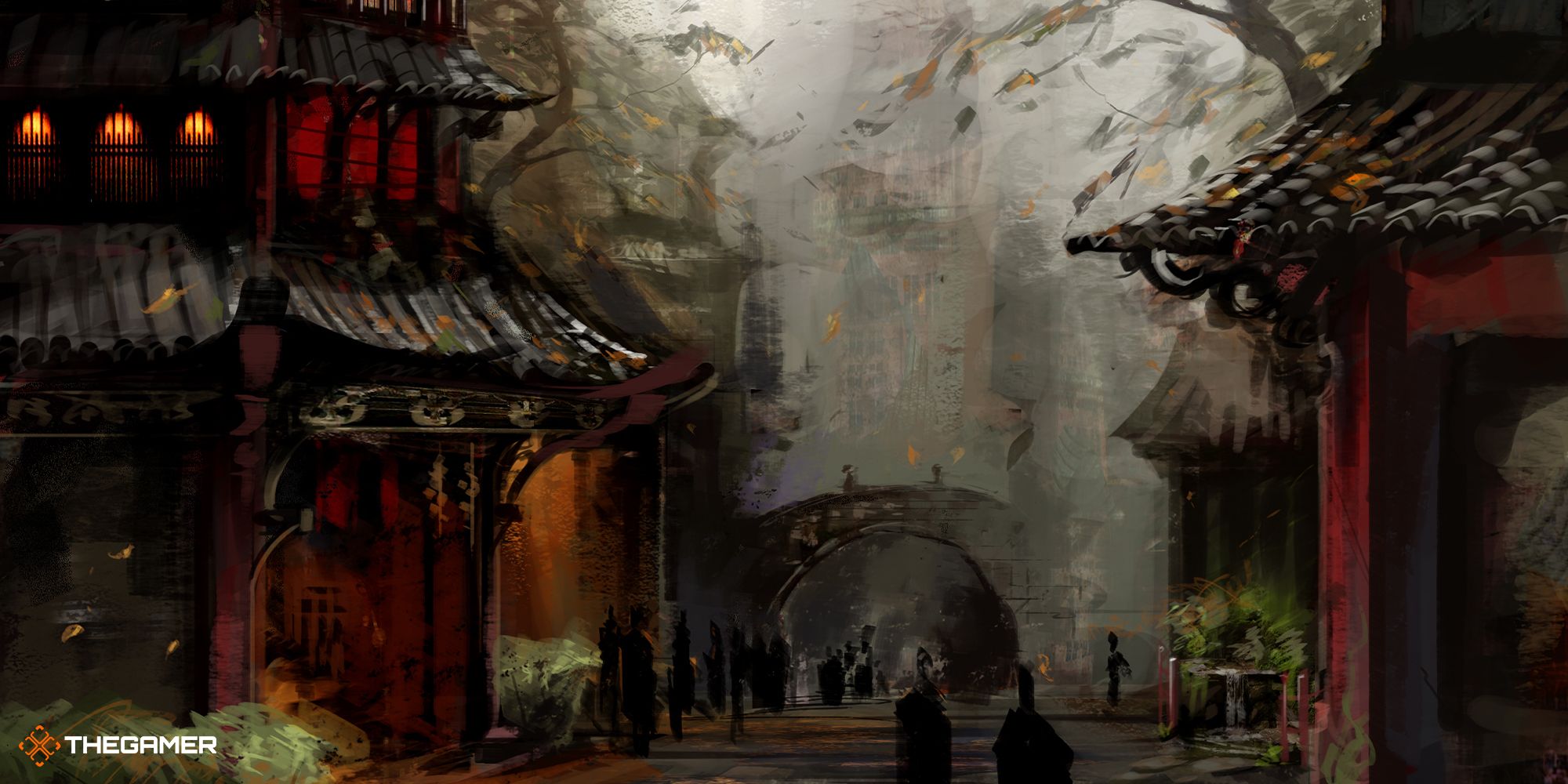 Last week, I had the opportunity to sit down with some of the team behind the latest Guild Wars 2 expansion, End of Dragons, to talk about their approach to reintroducing a familiar region: Cantha. This southern nation was featured in the Factions campaign for the original Guild Wars game, but hasn’t been heard from since.

Several artists who worked on End of Dragons were around when that campaign, Factions, was first being made. Aaron Coberly will have worked at ArenaNet for 19 years this December. He has become the art director for Guild Wars 2, but was the lead character artist back when he worked on Cantha for Factions

“One of the exciting things for artists, especially in the video game world, is how technology evolves,” Coberly says. “Things that you couldn’t do in the past you can do now. There are so many ways of making art more beautiful now, as the engines and graphic cards get more powerful. So, that, in itself, was super exciting: to take ideas, reimagine it, and make the world even more beautiful than it was back then.”

And it is, more or less, the same world. Guild Wars 2’s Cantha features generally the same areas that players got to explore during Factions: Shing Jea Island, Kaineng City, Echovald Forest, and the Jade Sea. 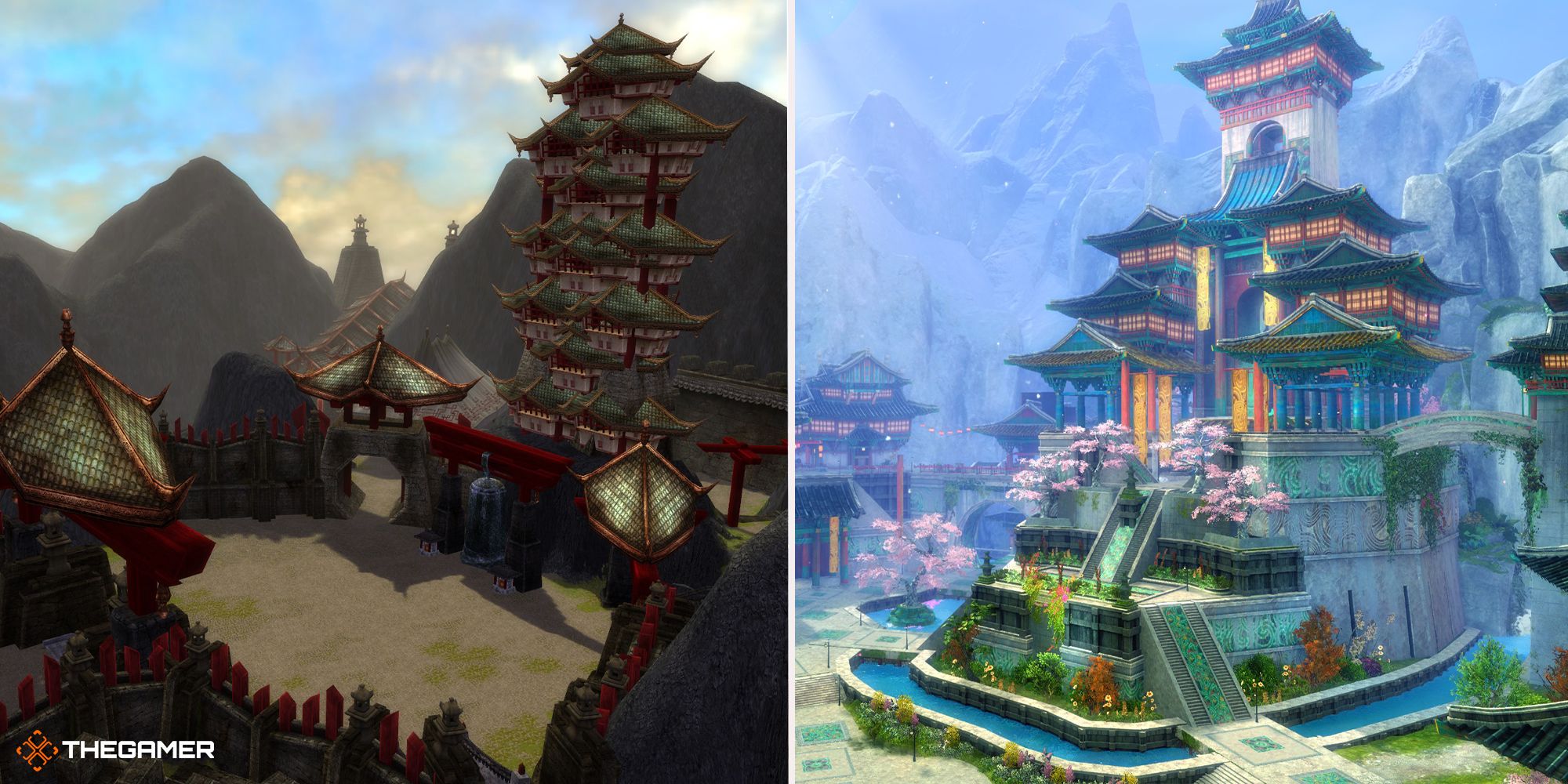 “We identified these areas as the core areas that would make the most impact, not just for the players that played Factions, but for new players too,” Coberly says. “Those four regions were very iconic and created a lot of visual variety.”

For each map, the design centers around a particular atmosphere or mood the team wanted to convey. Shing Jea was identified as the “entry point” for the expansion because of how it blends beautiful, man-made architecture with natural splendor. In New Kaineng City, the team strove to push the industrialization of the area to its limit. The Echovald Wilds are purposefully moody and dark. Finally, Dragon’s End is in the Jade Sea, which Coberly identifies as having a deep connection with the story of Guild Wars Factions. Dragon’s End continues the visual storytelling of the base campaign in Guild Wars 2: End of Dragons.

“For every aspect of this expansion, we had to break it down“and say, ‘OK, what did happen after the Ministry of Purity took power? What’s the timeline? What’s the history?’” says Matthew Medina, lead narrative designer. 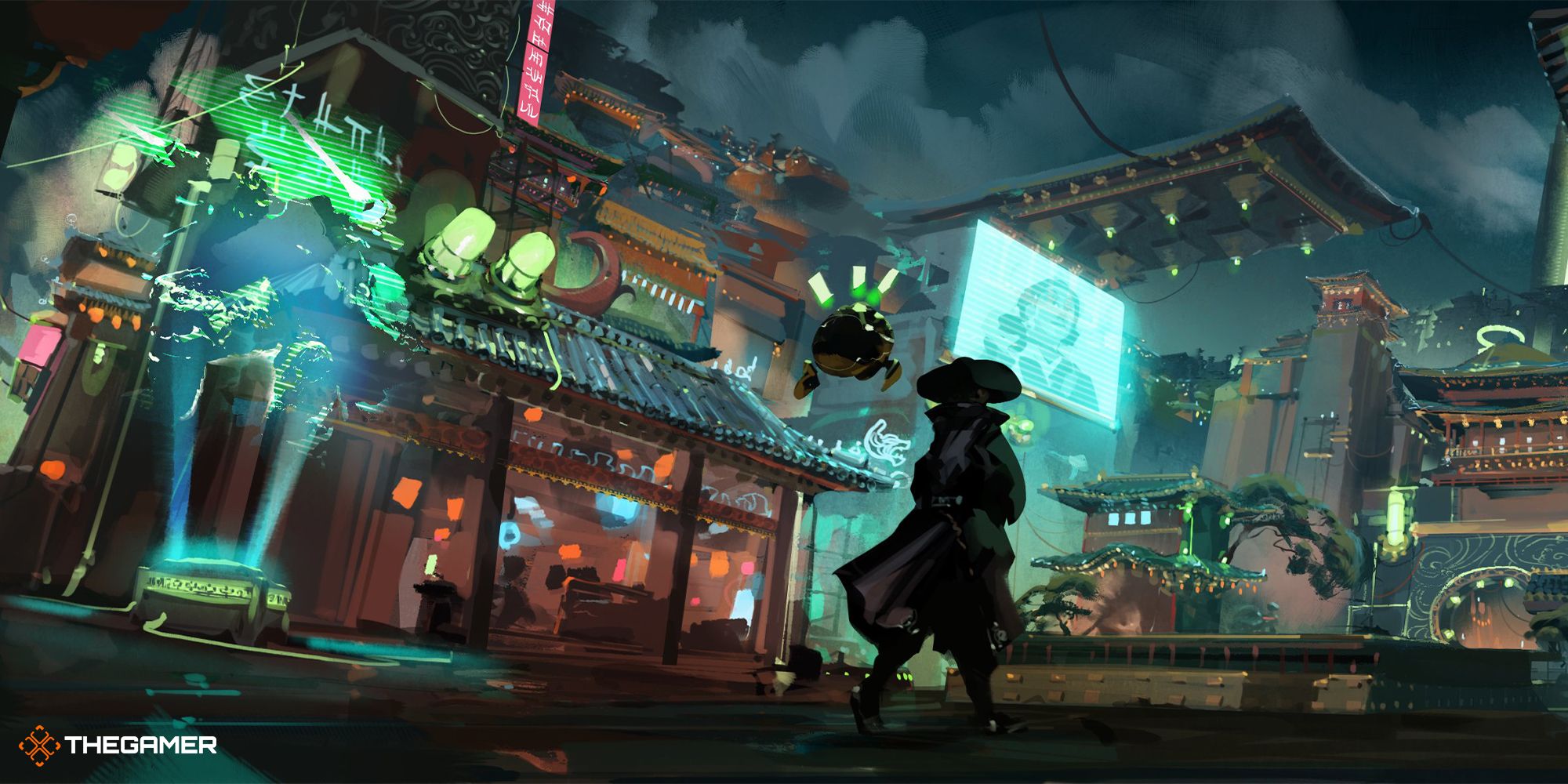 One big change, of course, was the introduction of jade technology. Essentially, this new tech utilizes jade harvested from the Jade Sea that has absorbed magic over many years. The jade can retain power, like a battery, which can then be used to power mechanical devices.

“The humans that we’ve seen in Tyria are so much less technologically advanced,” says environment artist Tracey West. “The closest we have seen to what Cantha has is what the Asura, or maybe even the Char, have done. So, I think that huge step up really sets Cantha apart in terms of what players have seen humans capable of. Jade tech really helped sell that this was a unique area that hasn’t had a lot of contact with the other human settlements for a long time.”

This new tech alters everything about Cantha, including the way the players can interact with the game world.

“Back in Guild Wars Factions, the best you could do was jump using an emote,” West says. “So, there was a pile of new areas that now, with mounts and ziplines, players could access for the first time. The biggest [use of jade technology] in [Shing Jea Island] was Joon’s mansion. That was a really intense collaboration between props and Connor Fallon on the design side to really get all the pieces to work. We were realy pushing what we could do in an encounter space and using moving platforms, spawning creatures, and tripwires creatively. I think we surprised even people internally with what we were able to achieve in that space.”

Jade-tech is also a reminder of the Empire’s grip on the province. Since the time of Guild Wars Factions, the Jade Empire has gained control over almost all of Cantha. The human Luxon and Kurzick clans have been absorbed by the Empire, though their descendants are still differentiated cultural groups within human society. 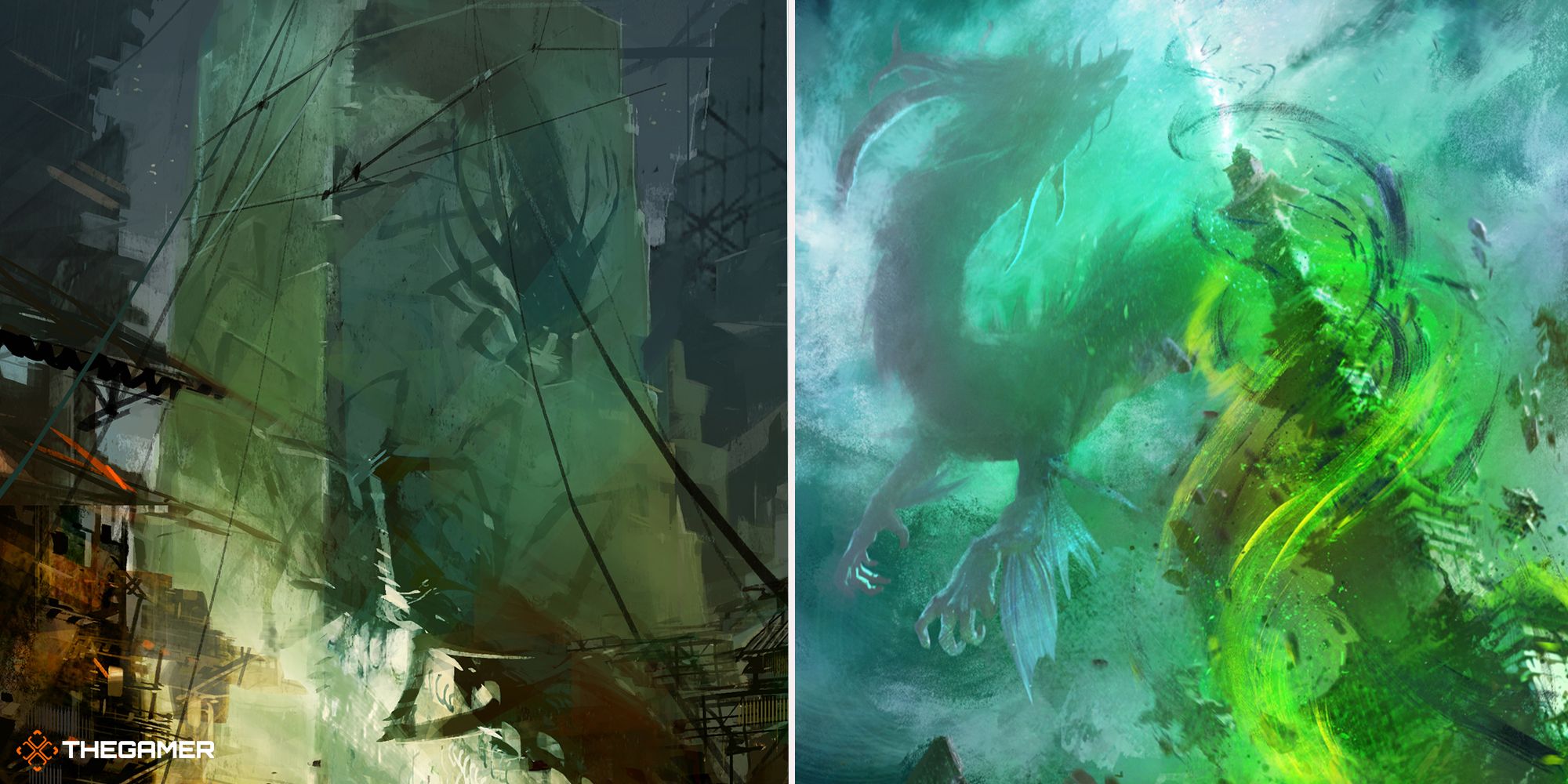 “It’s a fairly technologically advanced nation,” Medina says, “so even in areas where the empire doesn’t necessarily have large outposts or structures we wanted to have their influence around. One of the things that we did was create a holographic news network. We have these disks on the ground or on a table that would portray a holographic news anchor, Mi-Rae, who would give the news of Cantha. So, we created that character as their Walter Cronkite. One thing I find very interesting is the balance between old and new, which you do get with those holograms. In the middle of the Echovald Wilds, you still get the news, which is very modern.”

Hours of slogging through governmental bureaucracy is probably not one of the things that Canthans relish about their modern, high-tech lifestyle, but it makes for an amusing sequence for the player. During the story, the Commander has to visit a governmental office, a bit like a DMV in America, to get their travel permits. According to Medina, it was inspired by his own emigration experiences.

“I gotta tell you,” Medina says, “waiting in line in an immigration office in a foreign country, having to get papers that say who you are and that you’re legally allowed to be here and to work here and to live here – I definitely had to stand in or take a number and sit in a line and wait for hours to get in facetime with one of their immigration officials.”

Medina tells me that the government office environment was fun to set up. “I did an initial pass and I thought of some funny things, like you have to have the white background for your picture to be taken somewhere in here, all these things. But, I think we made three different passes adding more and more chairs to that room over time, just to get that depressing ‘you’re going to be here forever’ feeling across. A completely appropriate amount of chairs.” 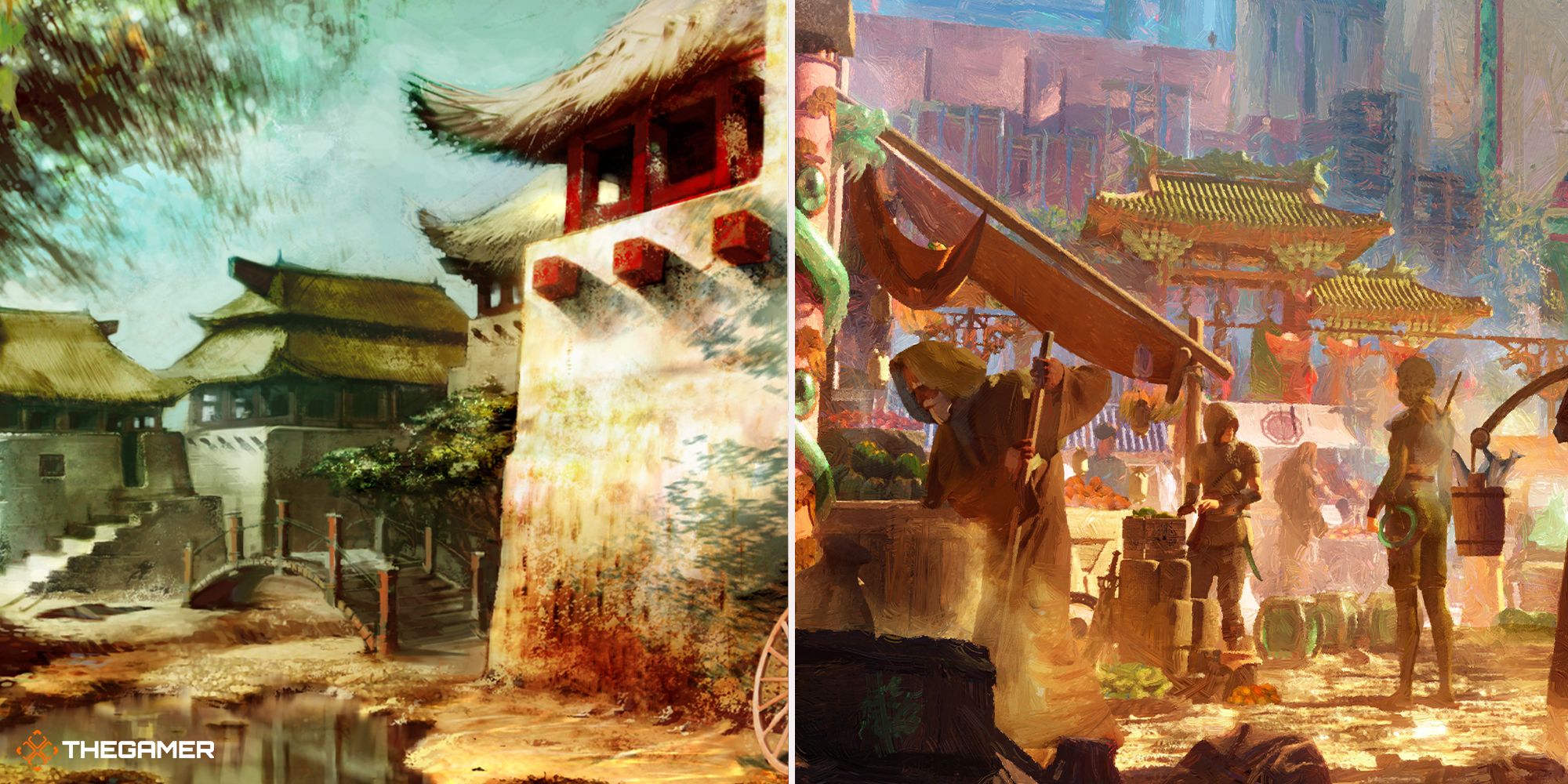 Jesse Christensen, another environment artist for Guild Wars 2, says that this kind of environmental storytelling is “one of the more gratifying parts of the job.” He and his teammates reminisced about other such areas they got to fill with life, like Mai Trin’s apartment full of cats.

“Mai Trin is kind of a mess,” Media says, “so her apartment reflects that. I was like, ‘she’s going to have at least six cats.’ And I think we ended up with seven or eight.”

Before its release, I worried that the expansion would rely too heavily on the nostalgia factor of Cantha, leaving no breadcrumbs behind for those of us who didn’t experience Guild Wars Factions. I was pleasantly surprised to find that the team at ArenaNet truly brought Cantha to life, due in no small part to these detailed little spaces.

Just like a foreigner in a new land, the player spends time adapting to the sights: the unusually-shaped mechs, the mini boats, the strange technology. There is nothing to betray the synthetic nature of NPCs – it’s clear that they have been here just even longer than you’ve been saving the world from Elder Dragons, and they’ll be here long after, too. But, through small spaces, carefully decorated, we find are able to find something quintessentially human, undeniably familiar, in these strangers.