Horizon Forbidden West offers one of the most expansive and engaging open-world experiences in video games. It's full of interesting characters, a unique and compelling story, gorgeous vistas, and of course, killer machines that resemble familiar animals from the natural world.

Many common mammals and dinosaurs have been adapted into dangerous robots across both Horizon titles. Guerrilla Games has turned almost everything from bears to ostriches and even prairie dogs into lethal predators looking to take you down, but there are still a few animals and different species that need to be added to their repertoire of enemies. Here are some that would be great to see. 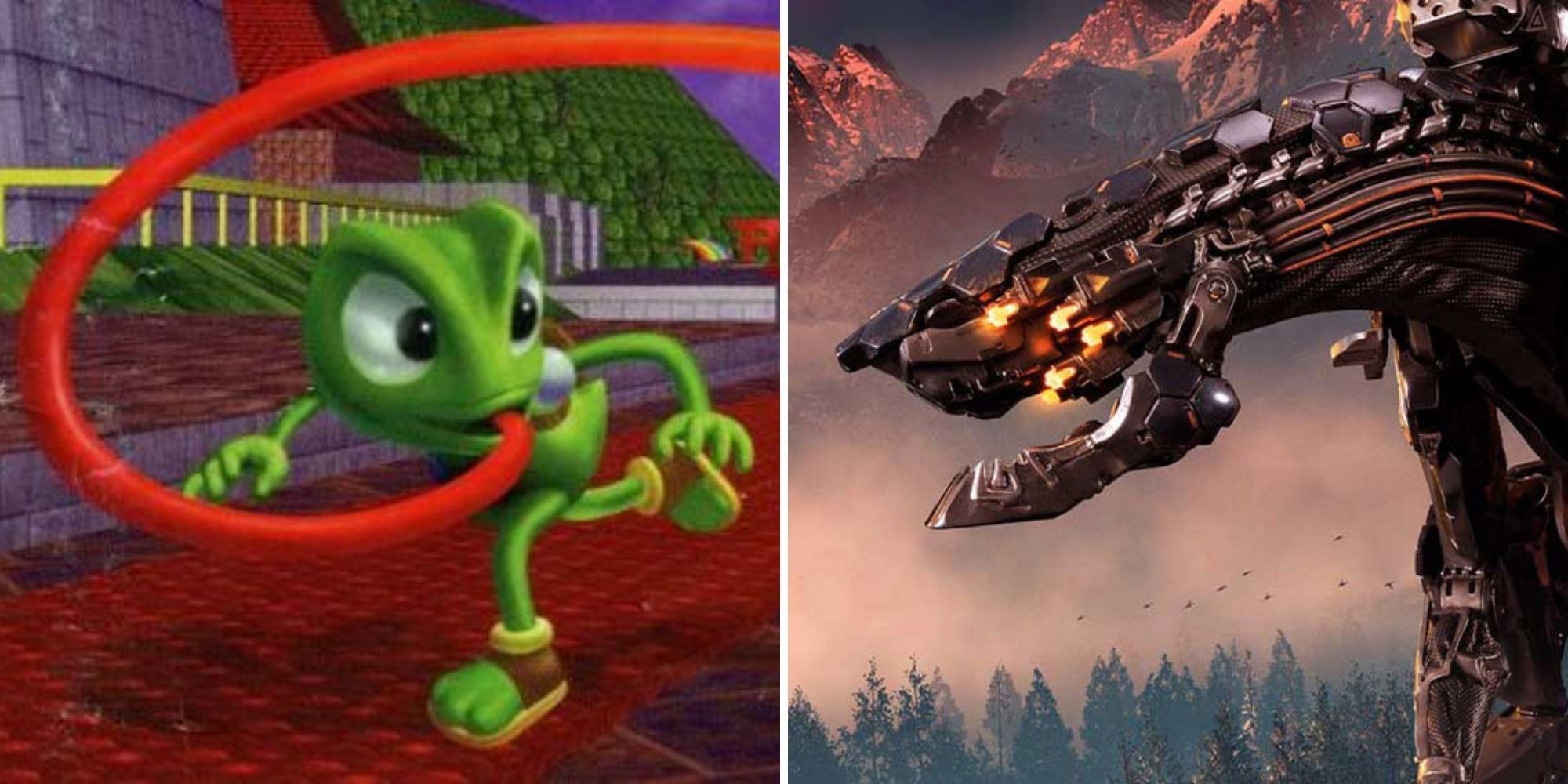 It's easy to get lost in Horizon's lush jungles. The vibrant colors are mesmerizing and the forests are so dense it's hard to see what's waiting for you in the distance. These areas are usually filled with smaller enemies that Aloy can easily sneak around, but a giant robotic chameleon could cause her some trouble.

Similar to Stalkers, a chameleon would be perfectly camouflaged and invisible to the naked eye as you explore a new area. The biggest difference between the two would be the chameleon's ability to hang on to walls and ceilings. It could also use its tail and tongue for unique ranged attacks. 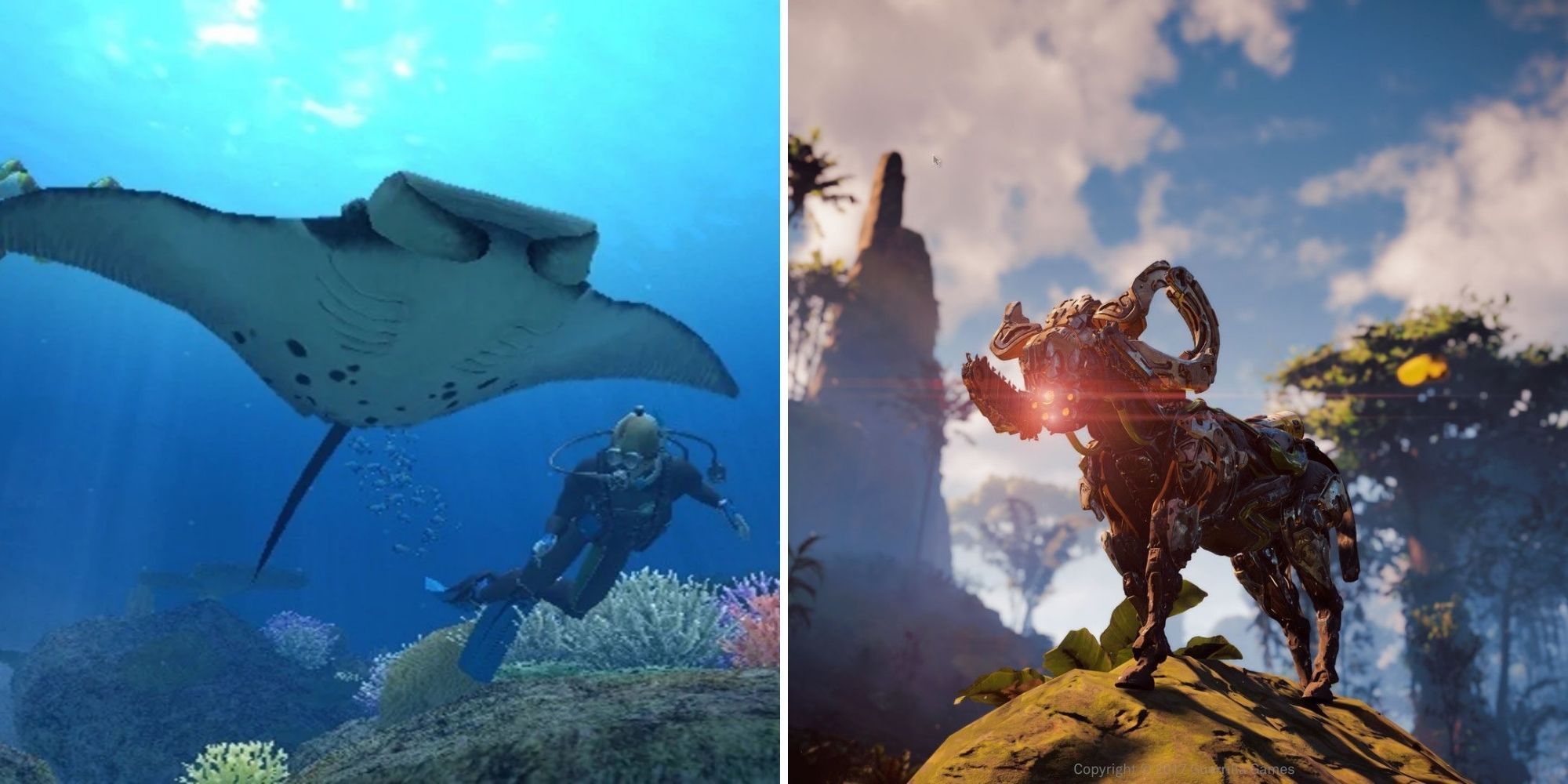 One of the major new features in Horizon Forbidden West is Aloy's ability to swim underwater. This enables her to explore new areas and face a variety of enemies unlike any she encounters on land. While most machines in the series are focused on attacking you, Aloy has a handy Override ability that lets her control them.

A stingray could be an interesting enemy to fight, but it's more likely that a mechanical version would end up being used for recon over combat. A device could be placed sneakily upon on it as it swims around the ocean, scanning everything beneath it. If Aloy can get close enough to one, she should be able to Override it and hop on its back. Perhaps doing so would allow her to ride it and reach her next underwater destination quicker. 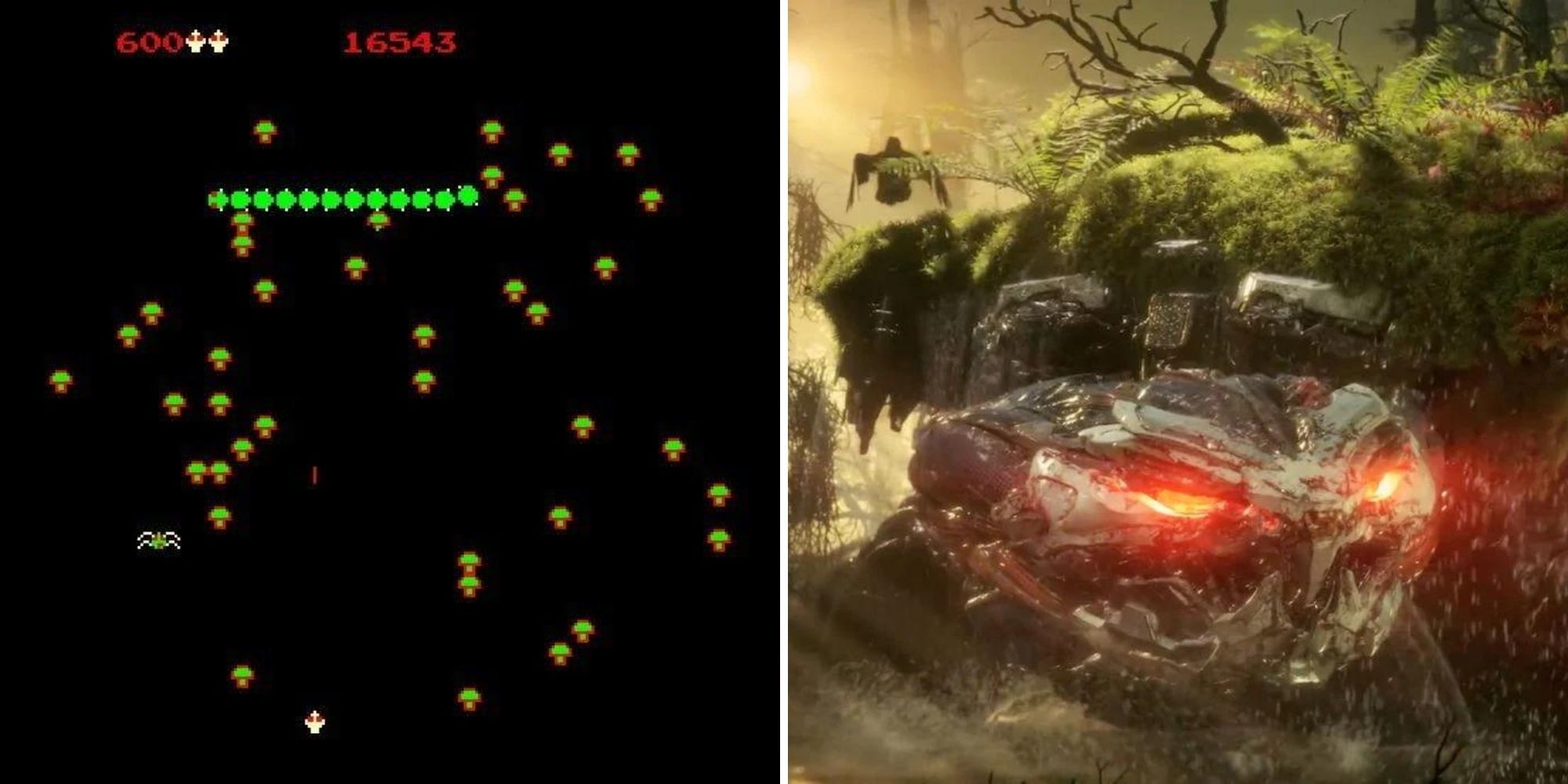 You have faced giant mechanical birds, mammoths, and even dinosaurs, but where are the leviathan-sized bugs? In a video for PlayStation's YouTube channel, Horizon's Art Director Jan-Bart Van Beek talked about playing around with the idea of basing the machines on "more insect-like creatures" at one early point, before the team decided to focus on prehistoric animals instead.

Imagine navigating your way through a new area in the game, only to spot a mechanical ball rolling around ahead of you. As you approach, the ball suddenly opens up to reveal a terrifying mechanical centipede, with its hundred legs swinging in your direction. The centipede would be a difficult and strategic enemy to fight, because of its hard outer shell and soft underbelly. Aloy would have to carefully expose this to damage it.

7 Lion: Another Deadly Predator For Aloy To Contend With 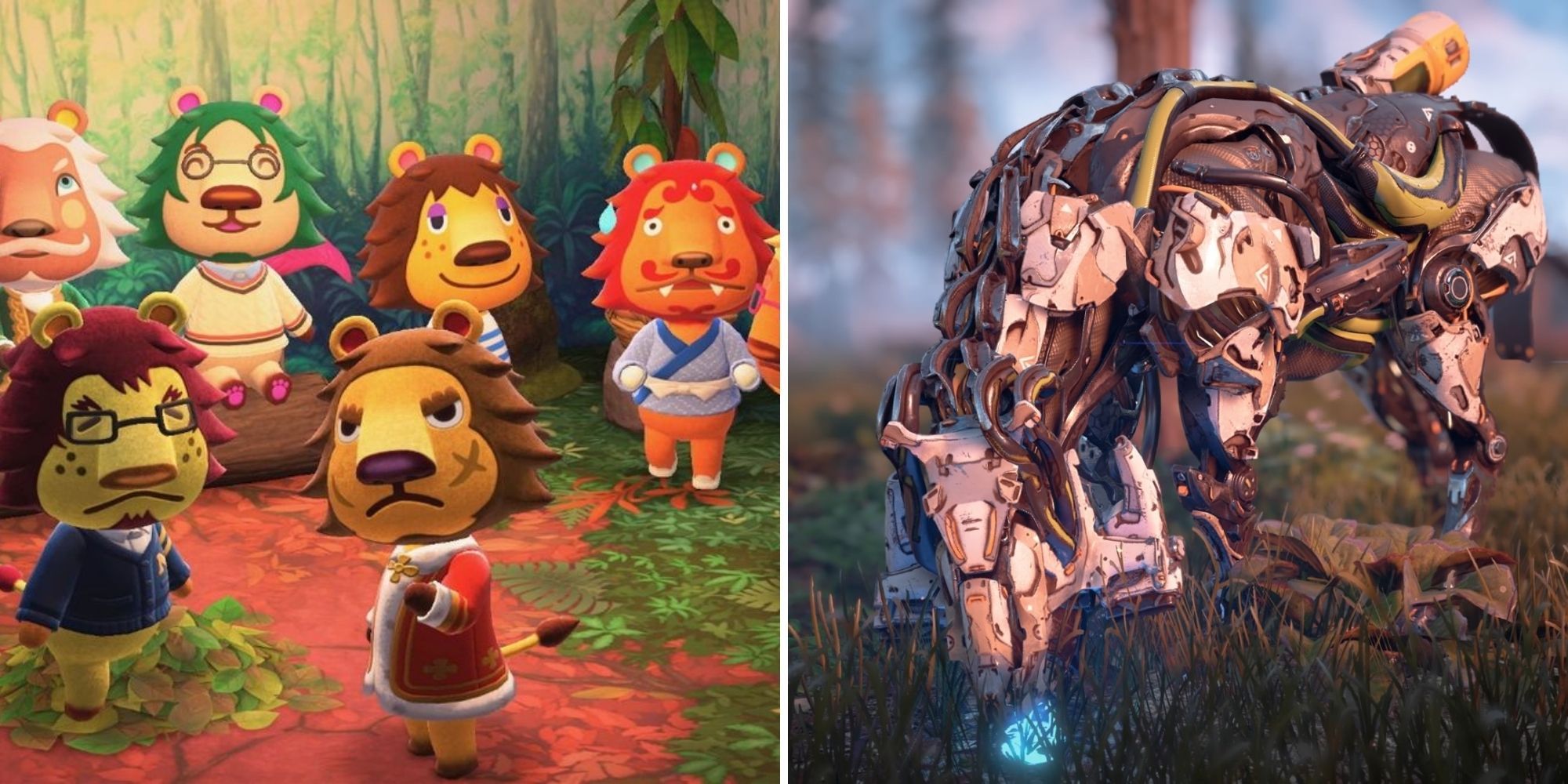 With elephants, giraffes, and other beasts represented throughout the Horizon games, it's surprising that lions have not been featured yet. They are incredibly fierce and unique animals that could be adapted into machines in a few interesting ways.

Lions typically travel in packs, so you wouldn't be fighting them off one at a time. You would have to sneak your way through the pack, or at least be quiet enough to set up traps in case they notice your presence. What would make lions even more fascinating would be imbuing them with elemental powers. You could come across fire-maned beasts in the desert, then eventually stumble upon ice-maned variants in the snowy mountains. Lions could be incredibly diverse and dangerous machines to encounter. 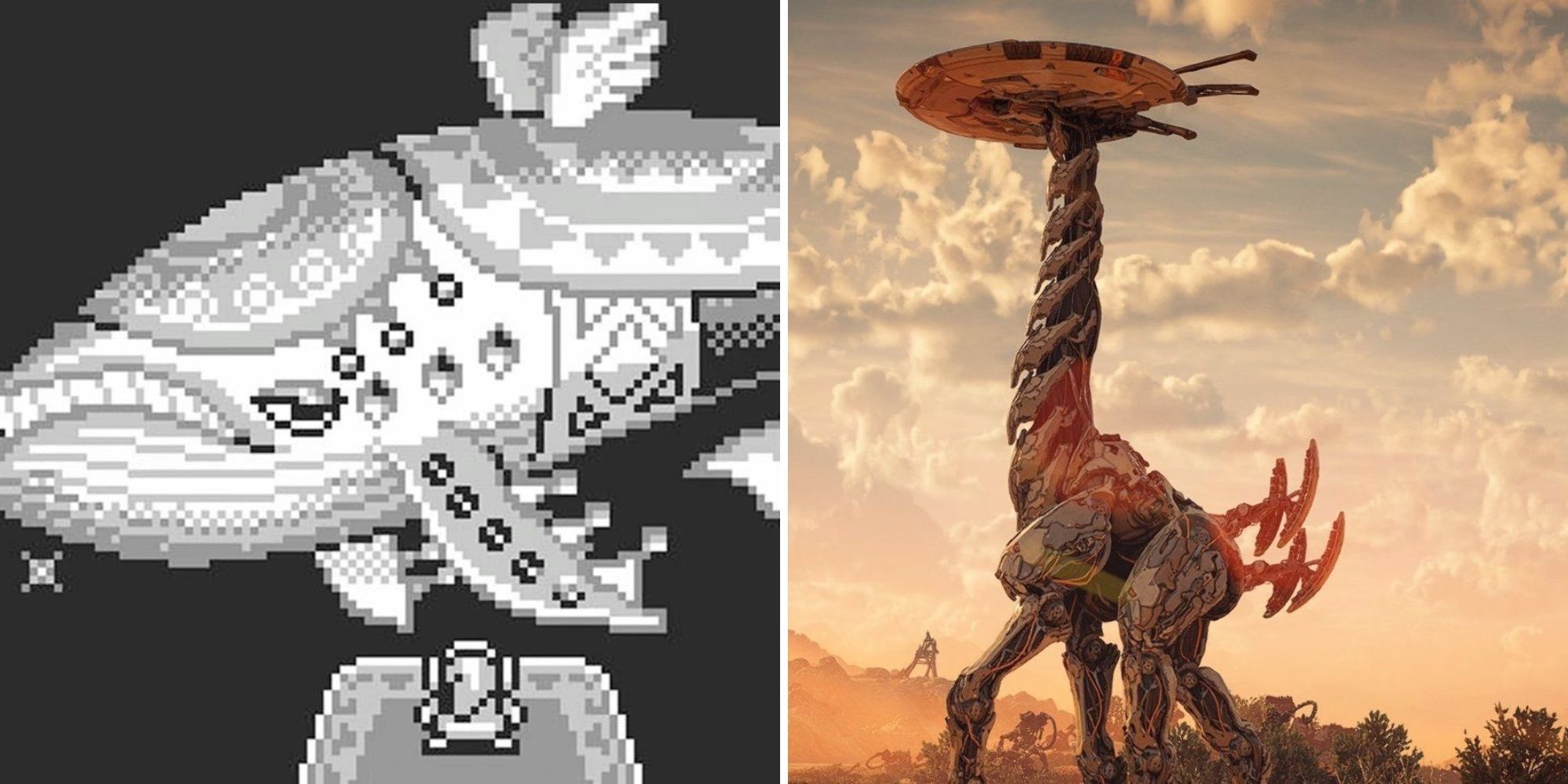 Horizon Forbidden West is a game that will often have you taking screenshots of the beautiful scenery and lighting. Its magnificent scale makes everything from distant villages to the setting sun seem epic and often breathtaking.

Visualize yourself playing as Aloy and swimming through a new and dark part of the ocean. Suddenly, the largest machine you have ever seen, in the form of a whale, swims past you. It could perhaps be a non-aggressive machine, created by GAIA to help filter the water in the sea. A whale machine could also function similarly to the familiar Tallnecks: By getting close enough to one, Aloy could use the whale's GPS to uncover hidden loot. 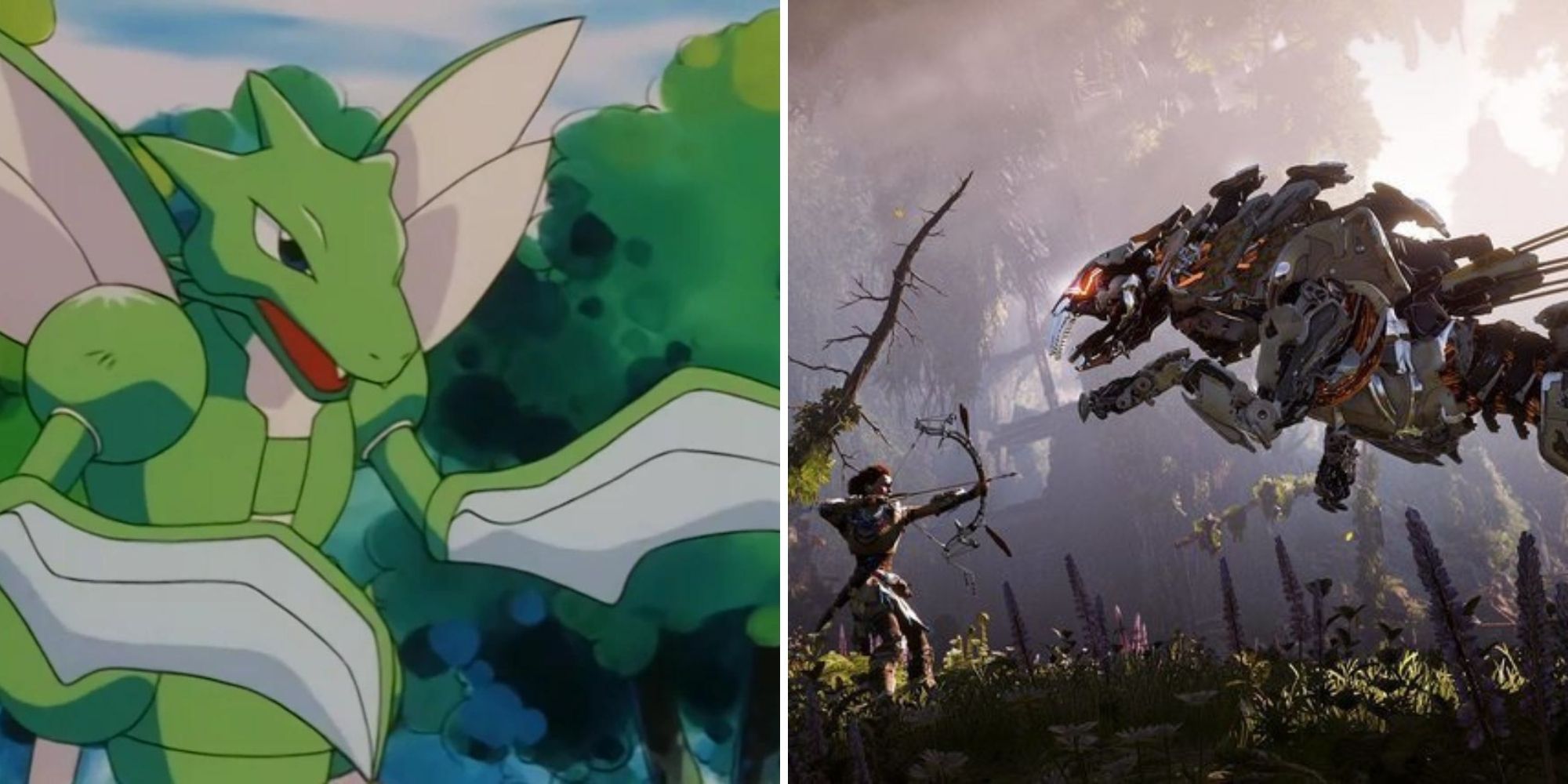 Centipedes would be tough insect-inspired machines to fight because of their defenses, but a robotic praying mantis would be a lot more aggressive. It's often hard enough to roll out of the way of a charging Ravager (here are some useful tips for fighting those pesky machines), but trying to dodge an attack by a blade-wielding machine could be intense and satisfying.

A giant praying mantis with swords for hands sounds terrifying enough, right? Let's also not forget that praying mantises have wings that allow them to fly around. The wings would make its approach tense and unpredictable, while also allowing it to evade your weapon of choice. A tricky foe. 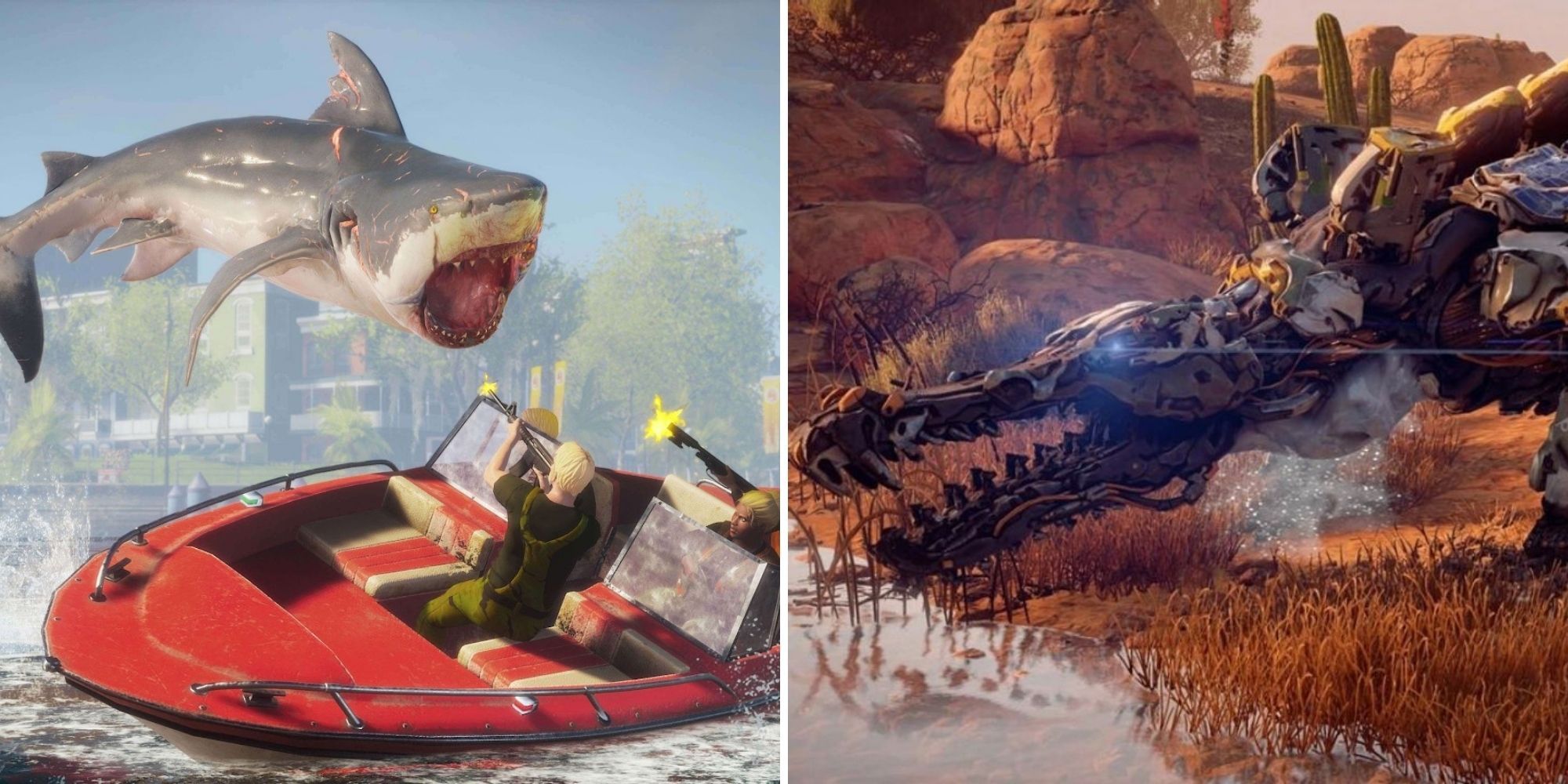 Lions seem like one of the more obvious predators missing from the line-up of creatures that want to kill you on land. When Horizon Forbidden West trailers began promoting underwater gameplay mechanics, though, it seemed obvious to most that sharks would become a new major threat.

To everyone's surprise, there are currently no sharks in the game. There are some interesting combat encounters while swimming, but nothing feels as deadly or ferocious as a possible encounter with a great white-esque machine. Controlling any character underwater can be a hassle, however, so being forced to fight a giant machine while figuring out how to swim to the surface before running out of oxygen would be tough. 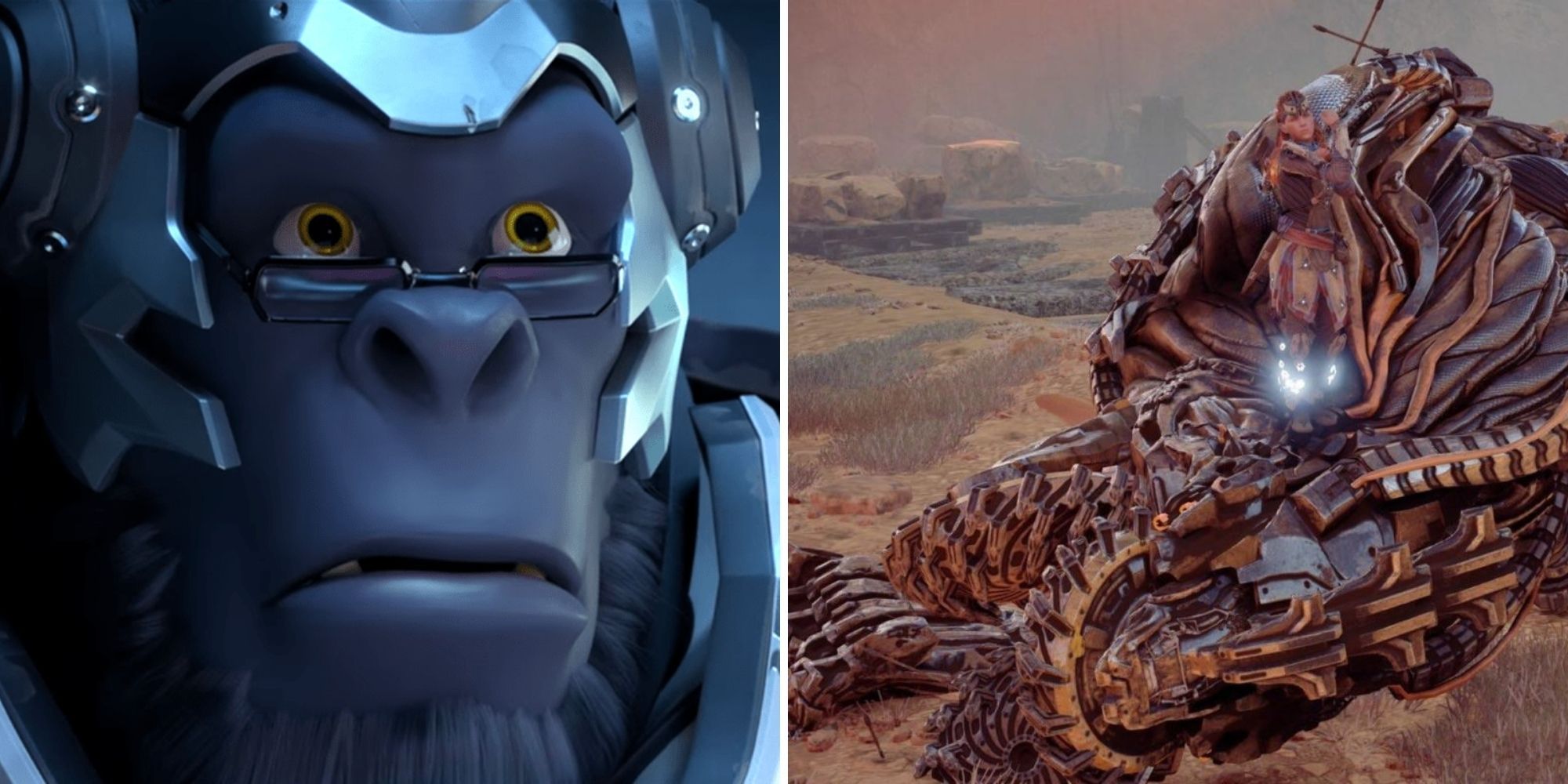 Similar to the shark and lion, gorillas are also powerful, potentially dangerous animals that have been omitted from both Horizon games. They'd be formidable and unique foes for sure.

Gorillas could make for excellent enemy encounters, certainly requiring the player to create new strategies to circumvent its speed and strength. It could use both its arms and legs as weapons, as well as utilizing the environment to slow you down (throwing improvised projectiles and so on). It could be a scary battle, but one that will keep you on your toes.

2 Octopus/Squid: A Tricky Enemy With Lots Of Parts To Target 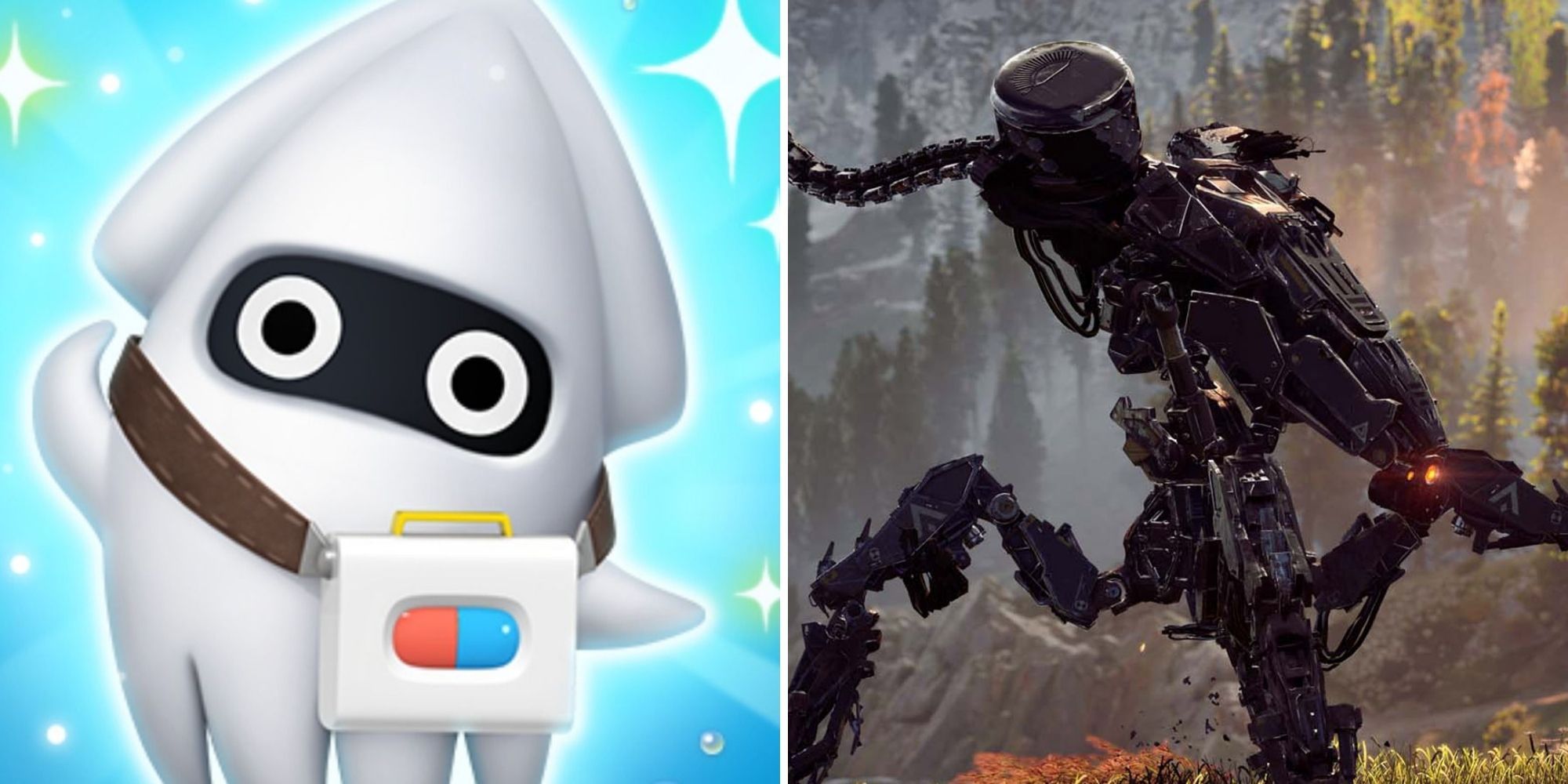 Sharks might be too hard to fight, while whales are passive and would rather leave you alone. An octopus or squid, however, could be both an interesting machine to fight and not too hard to take down in the ocean or on the land.

What would make this fight even more interesting would be if Aloy could detach legs by destroying specific components of its body. An epic fight against an eight-legged menace would be a joy, as you chip away at it with precisely targeted attacks. All the while, you'd be dodging grasping tentacles, whip-like attacks and even an excellent ink-shot projectile that could slow Aloy down for a certain period. 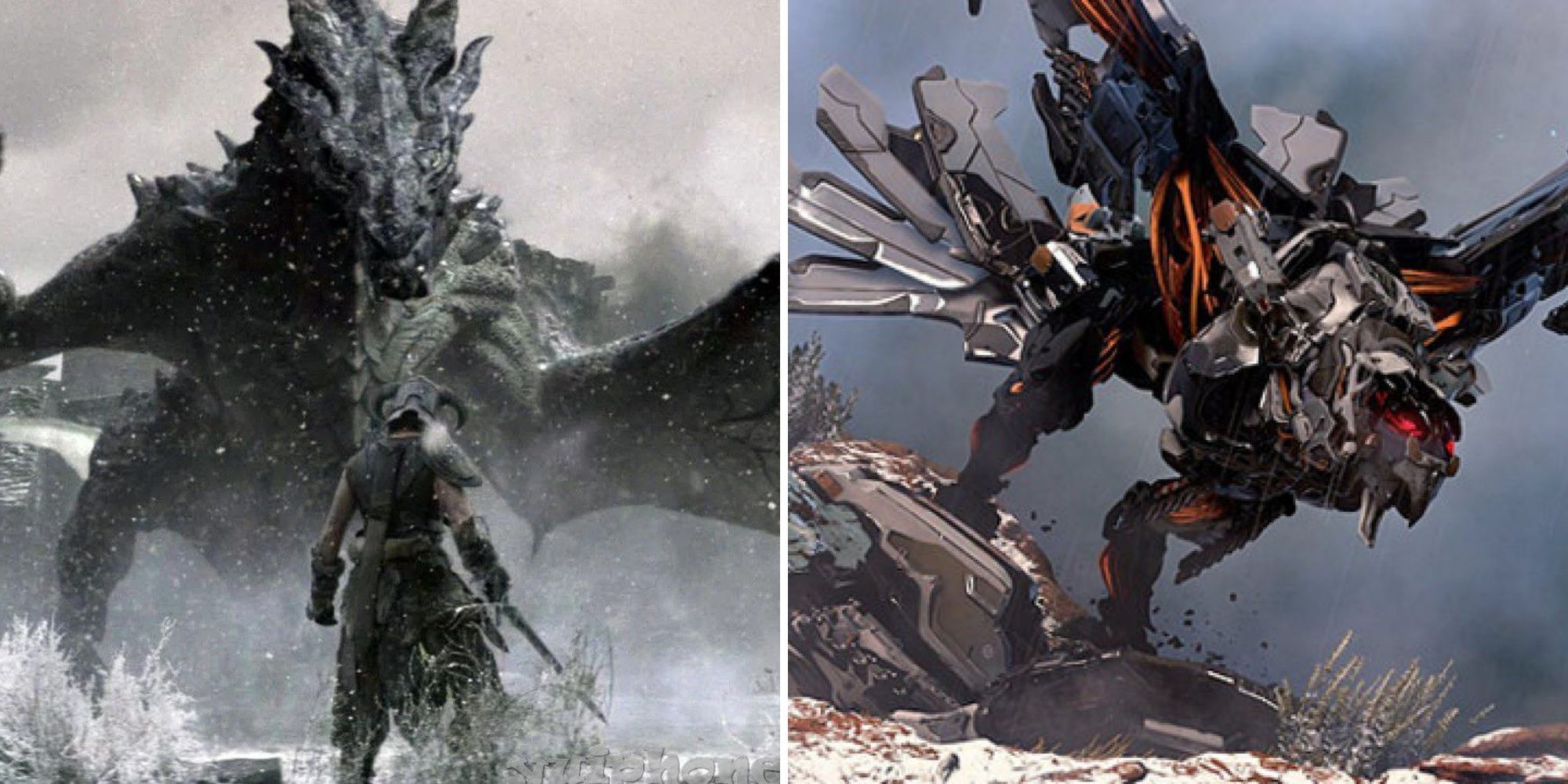 As you make more progress in Horizon Forbidden West, Aloy becomes stronger. There comes a certain point in the game where combat may seem too easy, as a single arrow can take down a Stalker or Grazer. After playing the game for over 50 hours, the excitement of fighting a Thunderjaw or Stormbird might lose its shimmer. That's why there should be a huge boss fight against a dragon-inspired machine in the series.

A dragon creature would be armed with everything that makes fighting machines fun; a versatile range of attacks that can include its wings, tail, or the ability to breathe fire. It could be one of the biggest machines in the series' history, allowing Aloy to prove once and for all that she is the chosen one destined to save this world.