Grinding isn't strictly necessary to outwit your political rivals on the battlefield in Triangle Strategy, but partaking in the game's mental mock battles can surely be a boon. Unlocking this gameplay feature will add another new mock battle to the mix, giving you a fighting chance to keep up with the enemy's levels in main story missions.

Are mental mock battles full-team training missions or strategic what-if sessions between Serenoa and his comrades? Their name seems to imply the latter, but that doesn't stop Anna from leveling up after tossing a poisoned dagger at an allegedly imaginary pikeman. Whatever the case may be, mock battles are an invaluable part of the game, so here's how to unlock them – and make the most of them. 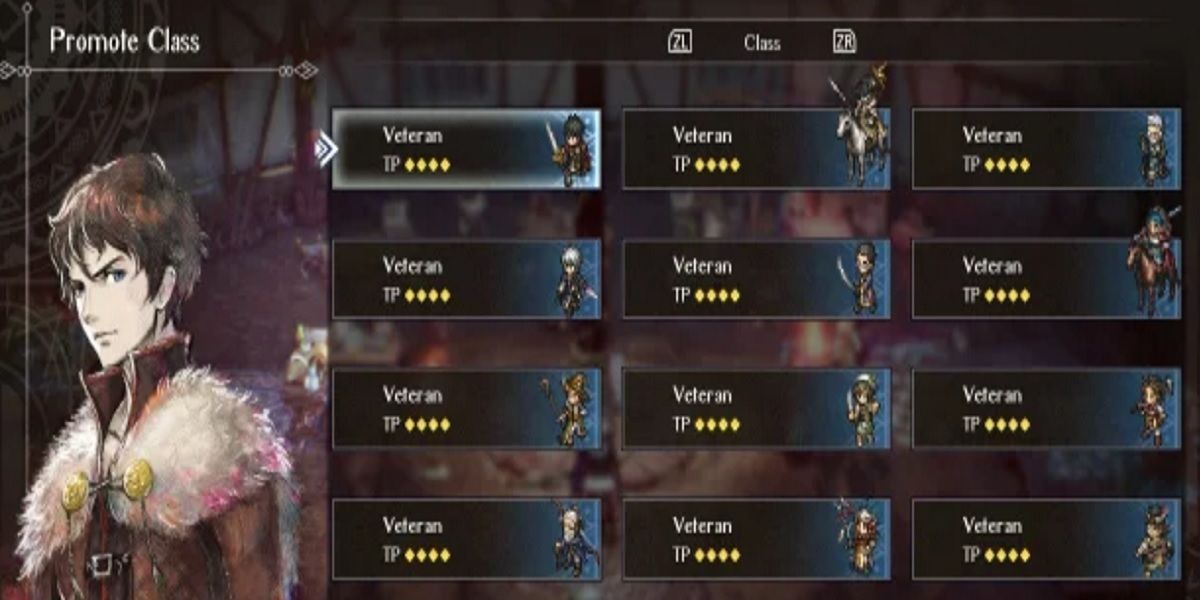 As you play through Triangle Strategy's tangled web of intriguing plot lines, bringing the pain to the many enemies of House Wollfort, you will soon notice that the number of experience points earned when a unit takes an action syncs to the recommended level of the fight itself. If Serenoa and friends are all, say, level 16 in a battle where 16 is the suggested target, there's a very real chance they won't level up at all before conflict's end.

How, then, can you keep up with the fact that the following story battle suggests you're level 18? If the fight dragged on long enough, maybe your team hit 17. But you're still a bit behind.

What's more, they're far and away the best way to earn weapon upgrade materials. You'll never have nearly enough just from story spoils and purchases from the encampment's merchant, Lionel – heck, you won't have the cash to buy many of those, anyway. It quickly becomes clear that Triangle Strategy's developers want you to check out those mental mock battles posthaste.

How to Unlock Mental Mock Battles 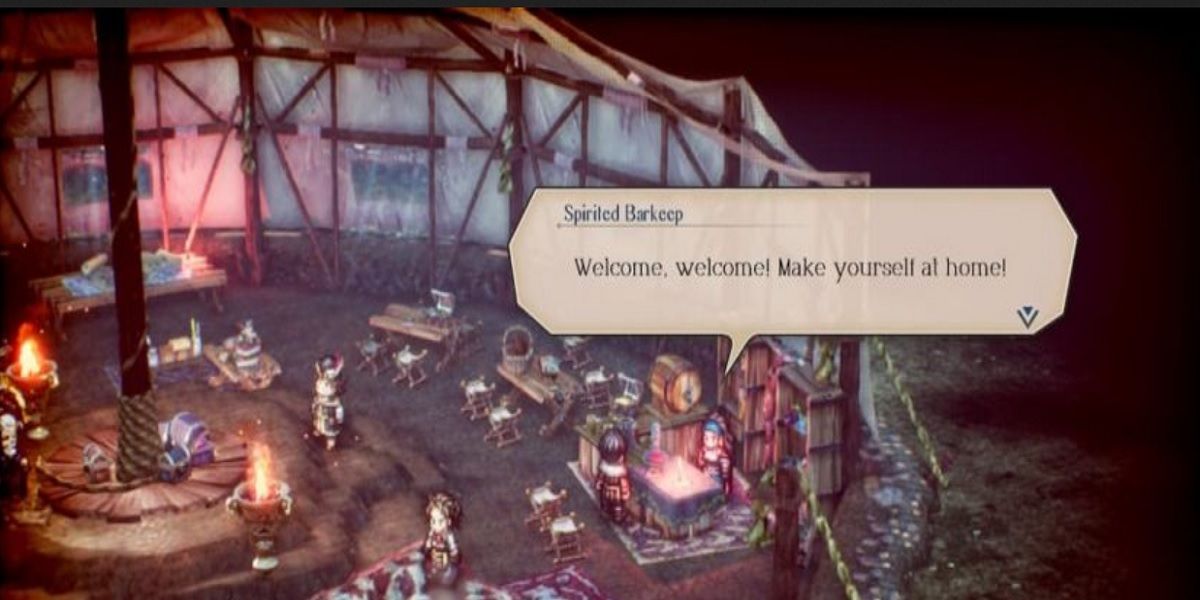 Starting in Triangle Strategy's third chapter, Serenoa can pay a visit to the encampment's barkeep (a lady whose name you may eventually learn is Hossabara) who will offer the first mental mock battle in the game. It's called Basic Training, and it takes place in House Wolffort's main hall.

In order to unlock further mock battles, you must continue through the main story. It's not a strictly one-to-one ratio, but the bulk of the game's chapters will add a new one for you to tackle; in a few rare cases, multipart chapters may add a total of two by the time they've ended.

The most important thing to note about mental mock battles is that you can replay them as often as you like. Since story battles cannot be repeated, these are the sole way to grind out levels and gain weapon upgrade materials on a consistent basis. Do recall, however, that since a unit's level syncs its experience gain to any fight's recommended level, you'll be struggling through a slow uphill situation if you try to push more than a couple of levels beyond that parameter.

Still, you may find yourself close to possessing enough Quality Timber (for example) to give a favorite character greater stats and fresh new passives. If that's the case, and you've found some in a certain mental mock battle? Plenty of reason to hop back into the saddle. 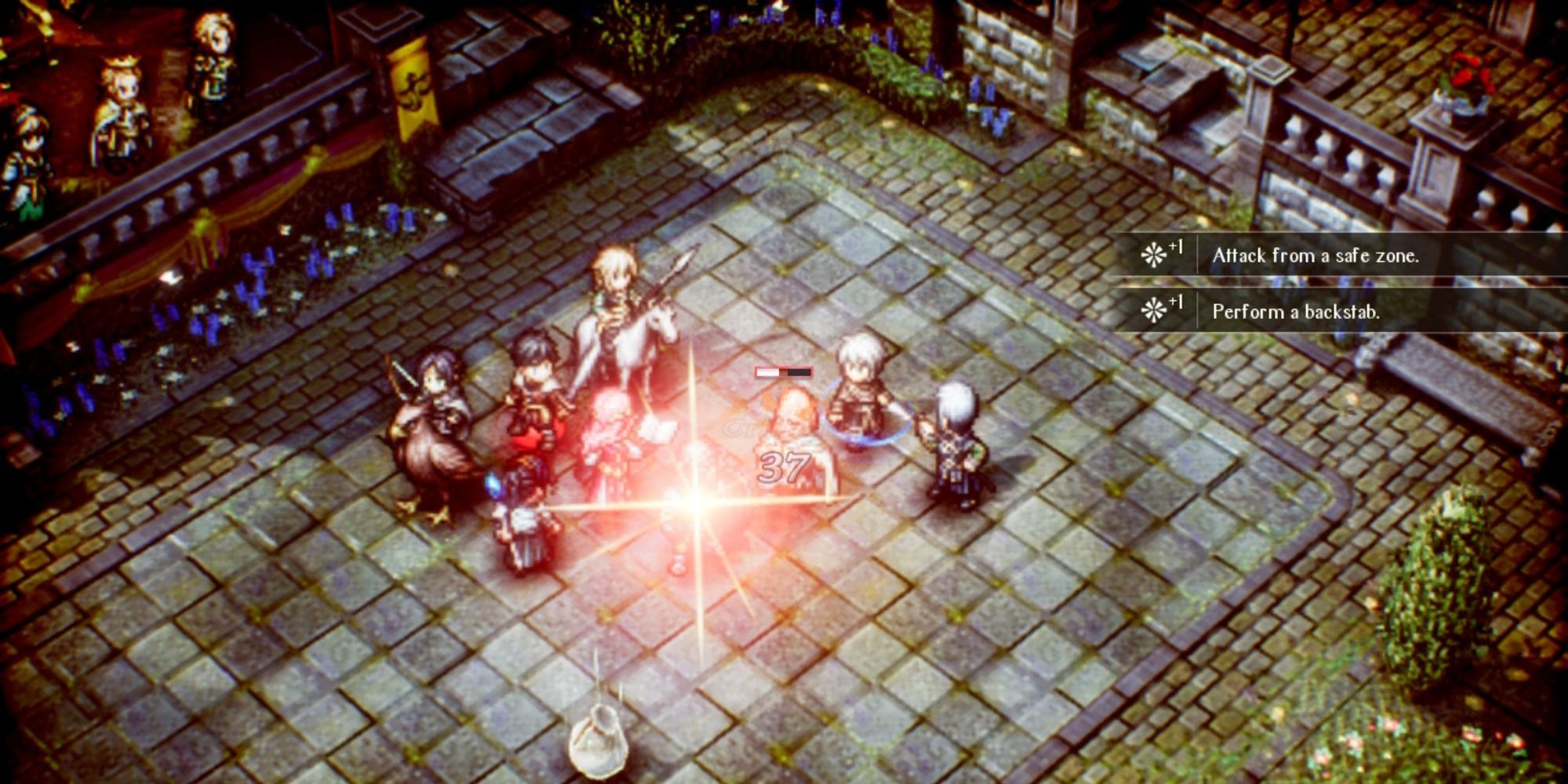 As you try out new stages, you'll encounter some fairly dynamic setups alongside some that are on the tamer side of Triangle Strategy's tactical prowess. The straightforward fights will pit your side against the other side in a relatively small space, both teams set up in line formation.

Here, you'll use conventional tactics – keep a bulky unit like Erador at the front, have him use Provoke to keep as many eyes off your physically weak fighters as possible, have a healer or two handy behind the rest of the group. All the basics, all at once.

The Floor is Lava (Not Literally)

But what about when things get weird? Adapt, adapt, adapt. A prime example can be found whenever mental mock battles are staged on the Forgotten Arena map. Here, you'll either be on raised pillars surrounding a larger central circle or you'll be on that circle and surrounded by foes on the pillars.

In both cases, the enemy units will frequently attempt to knock yours off the ledge. Not only will they take considerable damage when they hit the ground level with a thud, but climbing back up to the arena proper takes two turns even for Anna, and three for most of her compatriots.

The goal, in this case, is to form up closely with several units clumped together, the more stalwart of whom shoring up around the rest. In this sense, it's not so different from the simpler fare. But since one wrong move can knock several of your pals off-stage, maintaining proper positioning continues to be key. Don't feel bad about surrendering what seems like a fantastic opportunity to almost kill an enemy unit if it leaves you near a ledge.

The Valley of Dunes map isn't far off, but it can further complicate your predicament. In most mock battles, your party starts out at the bottom of a two-sided ravine with enemy Bowmen and Battlemages rearing and ready to shoot arrows and blast flames upon you from safer heights. Here, fliers are a godsend; you'll start out with Hughette, but you can potentially gain another later on. Absolutely bring Hughette with you, and once she learns Shadowstitching, use it to halt the marches of your would-be slayers.

As for the rest of your team, keep them fairly close together and have them climb up out of the western step-like surface until they've escaped up onto the high ground. If you're playing on Normal or Hard, splitting them up along both sides of the ravine may seem expedient, but it can also leave you reeling.

Here's a fun one. In many mock battles, just as in many story battles, there will be sets of wooden gates designed to disrupt both sides' ability to reach each other swiftly. They can be destroyed, and in fact, you will often see your foes doing exactly that, hacking away at them to get to you more swiftly.

You should do the same whenever possible. Not to get to the bad guys, but rather, because destroying environmental obstacles earns you experience points just the same as thwacking any bad guy on the head. This holds true for other obstacles, like crates. Why not seize the advantage and earn some extra numbers toward that next big level?

You'll likely notice that in most cases, Triangle Strategy won't allow your casters to perform spells upon areas without enemies to damage. This makes sense, but there's often a way around it. If you're feeling confident enough to "waste" a unit's turn in this fashion, have a mage cast a spell upon a tile or set of tiles that are flammable, freezable, and so forth. Even without enemy units there, the game treats what you've done as important enough to earn experience points.

You're kind of a monster, but war is hell, so.

Lowering the Difficulty to Expedite the Grind

If you're adamant about never lowering the game's difficulty beneath a certain point, feel free to skip this part. But if you're playing on a higher difficulty setting for story battles, consider cranking things down for mental mock battles, at least after you've cleared them "legitimately" once.

Fighting in Triangle Strategy is not a swift and clean affair. This is an SRPG in the vein of Final Fantasy Tactics, Tactics Ogre, and the like. Grinding for weapon upgrades by entering the same mock battle five times in a row, even on Normal, can be an exercise in patience. Lowering your opponents' stats can turn it all into a comedic breeze.

We can take this a step further. If you want to level a few specific units, keep the mock battles' difficulty at Very Easy and ignore the prompt to include a party as numerous as the maximum number of allowable deployments. Opt, instead, to bring along three or four characters in a quick and simple map like Castle Wolffort: Hall or Whiteholm Castle: Gardens. By spreading the gained experience points between a smaller set of units, things may take a tad longer but they won't have to share with units who have already achieved whatever goal you have set out for them.

As soon as the merchant has a Golden Pinkie Ring in stock, purchase it and equip it on a unit who can wipe out several enemies at once like Frederica with her area-of-effect fire spells. The Golden Pinkie Ring increases the likelihood that enemies will drop spoils (loot) upon defeat. If you're really lucky, you can scorch the souls of several poor sops at once and have them all drop blue-colored (rarer) loot. Very nice.