I have no idea what Hyenas really is, and that's a huge problem. I was a little unsure about the game from the reveal trailer, but figured 'hey, they wanted to make a big splash and now they'll take the time to break the game down a little bit'. Flashforward to Gamescom, and I now know a lot about how the game plays, but nothing about what it actually is. This is even after a ten minute gameplay presentation and an in-depth interview with Sega’s Alex Hunnisett, the game’s live product director, for around the same amount of time. My biggest issue is that the game he described, what he told me it represents, wants to say, and stands for, sounds excellent. But I'm not sure it exists. Nothing that I have seen from any of the game's trailers, press releases, or indeed the gameplay presentation itself suggests anything close to that game will be what I play when Hyenas launches next year.

Here is the crux of my issue with Hyenas. Culture is becoming more and more IP obsessed, with everything getting a franchise, a spin-off, a cinematic universe. Media's popularity is rapidly becoming entirely dependent on 'hey it's that guy from that thing!', and stories are worse for it. Hyena's central aim of collecting pop culture trinkets seems to play into that. The gameplay presentation even revelled in it, gleefully detailing the how the Sega Genesis features in the game, including an indulgent joke about the Mega Drive. At one point the narrator woops "yay capitalism?" in a confused tone, and that's about as sharp as the satire gets. Meanwhile, staff joke about the irony of giving away free tote bags in the Sega booth when the game is a critique of capitalism – I smile and nod, having clearly missed the joke.

Then I speak to Hunnisett, and everything makes sense. I dearly hope that he is right and the bluster of the presentation is wrong, but if that's the case Hyenas needs to sort out its messaging fast. "We actually looked at what would we actually go after as a team, [and] we've got lots of comic book collectors, we've got lots of music fans. In a post-apocalyptic world, I'm more likely to go after the last copy of Spider-Man than I am after, say, a gold bar." 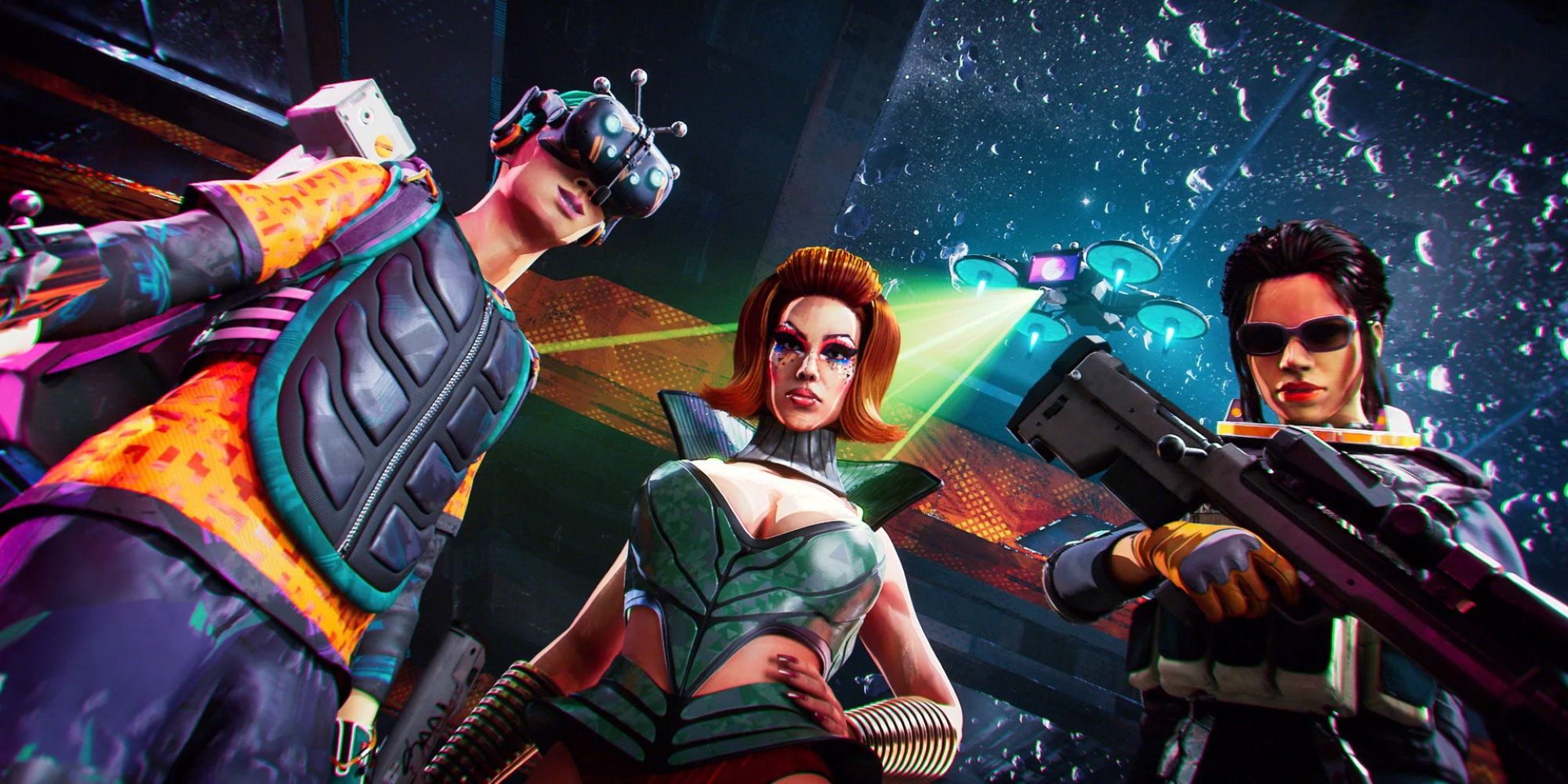 The post-apocalyptic angle isn't stressed too hard in the trailers, but understanding the story makes for a far more rounded game. The basic plot is that you live on an Earth that has been destroyed and left to rot (nicknamed The Taint), while the mega rich fly around in spaceships full of loot. You, as a gleeful scavenger (a hyena, if you will), are competing with other scavengers to bring the most loot home. In doing so, you're reclaiming that which matters most to you from the people who don't value it. It's a little like the quest for the last Twinkie in Zombieland, and is far more intelligent than the glitter and explosions make it seem.

"The idea is then, 'no, fuck you, that's our stuff'," Hunnisett says. "Ultimately, we don't want the super rich to take this back to Mars, it's like 'you've taken enough from this already, you're not taking this'. So it's about grabbing that merch and retrieving it and taking it back to the remnants of society on The Taint as opposed to going to some rich pricks over on Mars." 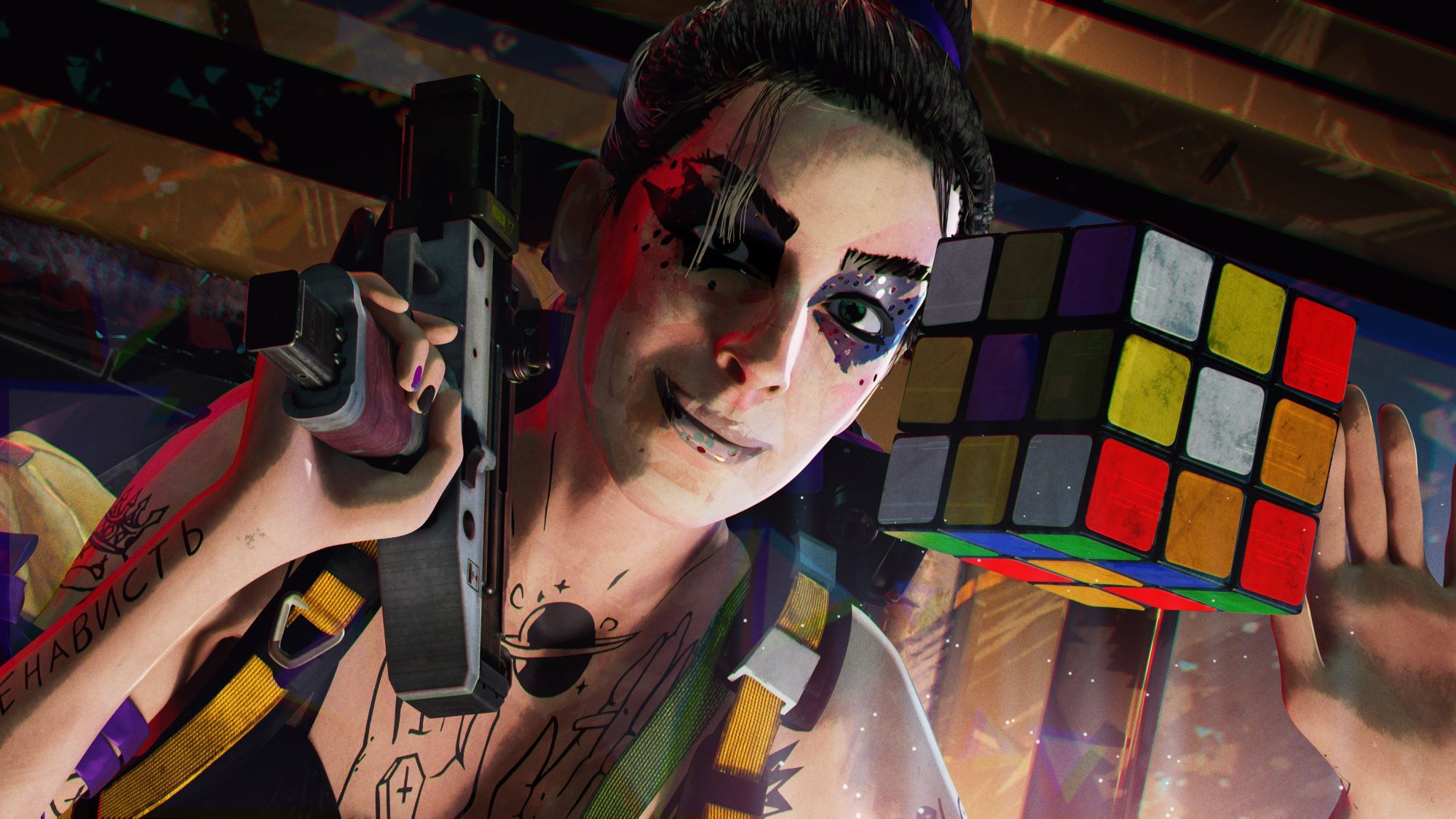 This sounds like a better narrative than the glitz presented by the trailer, but I've said before that I think, as a rule, critics overthink games and players underthink them. The fact is when Hyenas is out on the market, the majority of the playerbase aren't going to be too moved by the thematic purpose of the game, but instead by the gameplay. Even without the interview, I felt more positive about that element thanks to the presentation. The foam grenade, used to build defensive walls, traverse up ledges, and disable enemies, seems like a fantastic gadget, while the zero-g floating has different uses and looks fitting for the all carnage, all the time mentality of Hyenas. Fighting both against other players and NPC guards raises some interesting tactical questions too, but there's a lot of ways systems this loud and this complicated can fall through.

No sooner has Hyenas gotten me interested though, it throws a dampener in the mix. These foam grenades are sported by Galaxia, an outer space drag queen. I love drag and I think it's important to defend the queer art form from the reactionary attacks it finds itself under, but the presence of drag also makes me a little wary. Drag queens and kings are some of the most wonderfully expressive, creative, and political artists out there, but there is a mainstream perception that drag queens are just gay men being silly in dresses. It feels like having a drag queen in a game this messy in both its presentation and point of view is going to get lost in the crowd. I don't know enough about the other characters in the game, but personally when the only queer rep is a drag queen it tends to set off alarm bells about cliches, demographic focus groups, and heavy handedness. 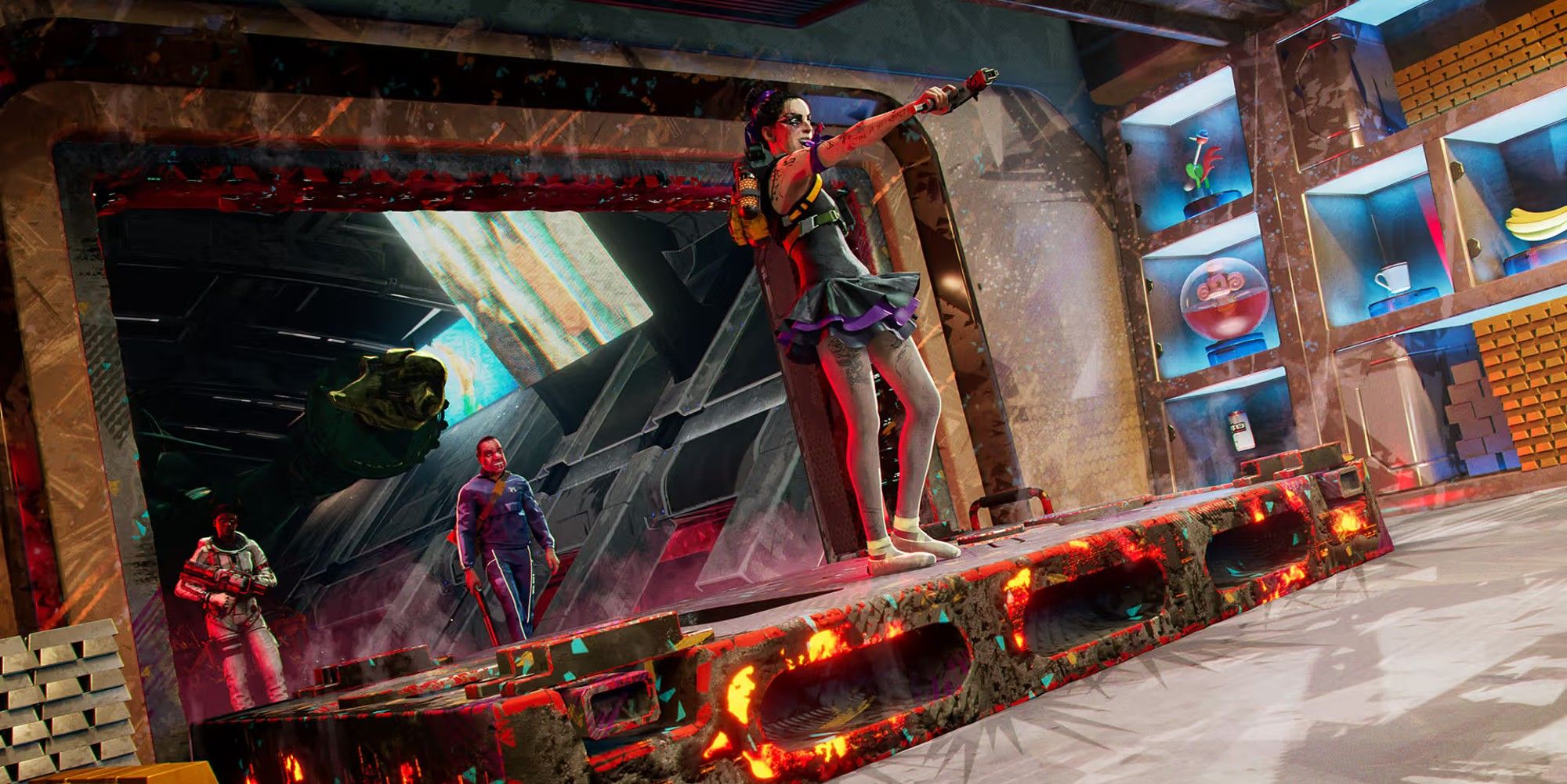 All of the characters are fixed in a roster like in a hero shooter, rather than the generic blank slate in Fornite or Destiny, but there are ways to make "this Galaxia feel like your Galaxia", which comes in the form of secondary weapons and gadget loadouts alongside the standard loadout set for each character. There seems like a lot of different ways to play Hyenas, especially with a solid cast of characters with their own flair, it just needs to line everything up.

I think Hyenas is trying to say something quite interesting, but I'm not sure if it will stick the landing. Then again, I think it will live and die not by how clever it is, but how fun it is, and on that front it has a lot going for it. The zero-g and foam grenades could add a few new elements to the shooter, as could the tactical make up of deciding which bits of merch to hunt, which ones to fight for, and which ones to leave alone. I just can't shake the feeling that Hyenas is so. damn. loud, and I can't hear myself think for it. Until it quietens down and gives me a moment's peace, I have no idea what to make of this game.