HyperX has spent years building out its lineup of excellent headsets for every budget and scenario. Now, it’s going back and making improvements to some of its best products, like the Cloud Flight. With the new HyperX Cloud Flight S, the company has made various revisions and added support for Qi wireless charging. This makes the Flight S a huge leap forward in terms of real-world use.

The HyperX Cloud Flight S is available now for $160. Like with the original Flight, it uses 50mm neodymium drivers with a closed-back earcup. The style, meanwhile, is closer to some of HyperX’s other recent Cloud headsets and is just as attractive. But the Flight S is all about wireless charging, and that’s why I like it so much.

Wireless technology has improved to the point that you are not giving up anything by dropping the headset cable. The original Flight S proved that. It sounds great and has a solid microphone for communications. Wireless means you switch from USB power to an internal battery pack, and that introduces other concerns. You have to make sure that you keep your headset charged or the wireless won’t work at all.

You might remember to charge your wireless headset between sessions most of the time. But even if it’s a rare occurrence, it’s frustrating to put on a headset and find that the battery is dead.

That’s where the Cloud Flight S is different. It has built-in Qi wireless charging, which is something you’ll find in a lot of smartphones. With Qi, you just need to set the Flight S headset down on a charging pad when you’re done. No finding the USB cable. Just plunk it down, and it’s good.

I tested this with a cheap Qi charging pad I had laying around. It worked well and charged quickly.

Cloud Flight S has 30 hours of battery life, according to HyperX. So as long as you let it sit on the charger overnight, you should almost never run out of juice. And you won’t even really ever have to think about it, which is a huge relief. 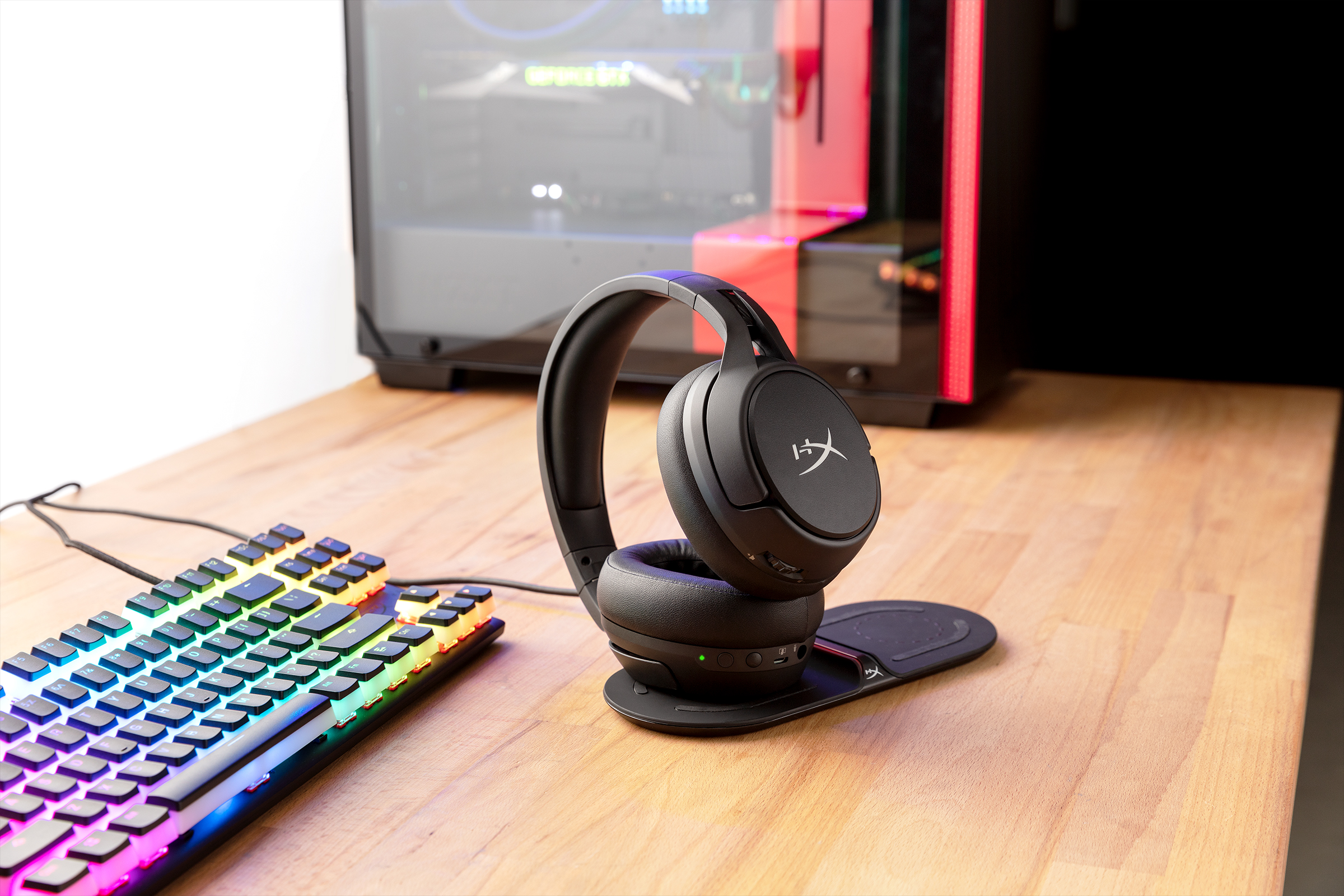 Above: The Cloud Flight S on a Qi wireless charging pad.

It has HyperX’s comfort and sound quality

Everything else on the Cloud Flight S is as I’ve come to expect from HyperX. It has all-day comfort with a design that distributes its weigh evenly across your head. It also holds in place securely without squeezing too tightly. A big reason for that is the malleable foam inside of the leatherette earcups.

Then the sound quality is top notch for this price range. It is closed back, so it has a slightly narrow soundstage. But the entire audio spectrum comes through distinct and clear. And its custom virtual 7.1 is also solid.

The biggest issue with the HyperX Cloud Flight S is that it doesn’t come with a charging pad. The company is selling its own ChargePlay Base with Qi wireless charging for $60. And that works with both the headset and the HyperX Pulsefire Dart mouse. I get why it doesn’t include the pad. It’s expensive, and people won’t need more than one. So you just buy it once and then get the mouse and headset without the ChargePlay Base.

Still, you don’t have wireless charging out of the box.

But thankfully, Qi is an open standard. You might already have a charging pad for a phone. You can just use that for your headset as well. If you don’t want to get HyperX’s, you can even pick up a similar one up online for $33 from Monoprice. So this is only a minor issue because it keeps the price down and enables you to get the Qi pad that you want.

My only other problem with the Cloud Flight S is its lack of Bluetooth. The included wireless dongle works with PC and PlayStation 4. But I also want my $160 wireless-charging headsets to also come with me and work outside the house. The Flight S looks cool enough for that, but it doesn’t support Bluetooth to enable that with most modern smartphones.

Of course, HyperX has a great Bluetooth headset in the Mix. I just don’t expect most people to purchase separate audio devices for different scenarios.

The HyperX Cloud Flight S revision makes a lot of sense. Wireless charging is the exact new feature that the Cloud Flight needed. It’s so easy to forget to plug in a headset when you’re done. But a dedicated charge base eliminates that hurdle.

I also prefer the charging pad to a charging stand. With the wireless pad, you can just drop it down and it’ll work. I’ve found that some headsets with charging stands require delicate placement to make proper contact for charging.

HyperX’s Cloud Flight S is a comfortable headset that is easy to use and sounds great.

HyperX Cloud Flight S is available now for $160. HyperX sent a sample unit for the purpose of this review.