“Half-Life is about the triumph and positive use of science, standing against the Combine’s cold and deterministic use,” Half-Life: A Place in the West writer Ross Joseph Gardner tells me. “The revolutionary science team of Half-Life is driven by empathy and even though they’re vastly and hilariously outnumbered, that imaginative ability to use science is what I loved about Half-Life 2.”

Every fan has their hook, something that draws them into the world of Half-Life and keeps them coming back for more—keeps them creating more. That was true even when no games were coming out. For me, it’s the characters and their unspeakably tight bond in the face of insurmountable hardship, something that Gardner and Michael Pelletier honed in on in their officially-licensed comic. It’s set in America, a wasteland abandoned even by the Combine and now ruled by the remnants of the US military. The Citadel never arrived there, appearing only in ghostly flashes, while a large community has formed and fallen into dystopia as they struggle to survive and give their fleeting existence some form of purpose.

“We knew we needed to get away from Eastern Europe—we needed to leave that continent and go across the world to somewhere else,” Gardner says. “Mike lives in Boston. He’s from a small town called Lowell. Franklin [where the comic is set] is a town south of there and when we were discussing the kind of story we wanted, we had the character of Albert Kempinski and Major General Long, the head of the soldiers who stormed the Black Mesa facility. We knew if we wanted to explore those soldiers and the story with Kempkinski, America offered a thematic grounding for that.” 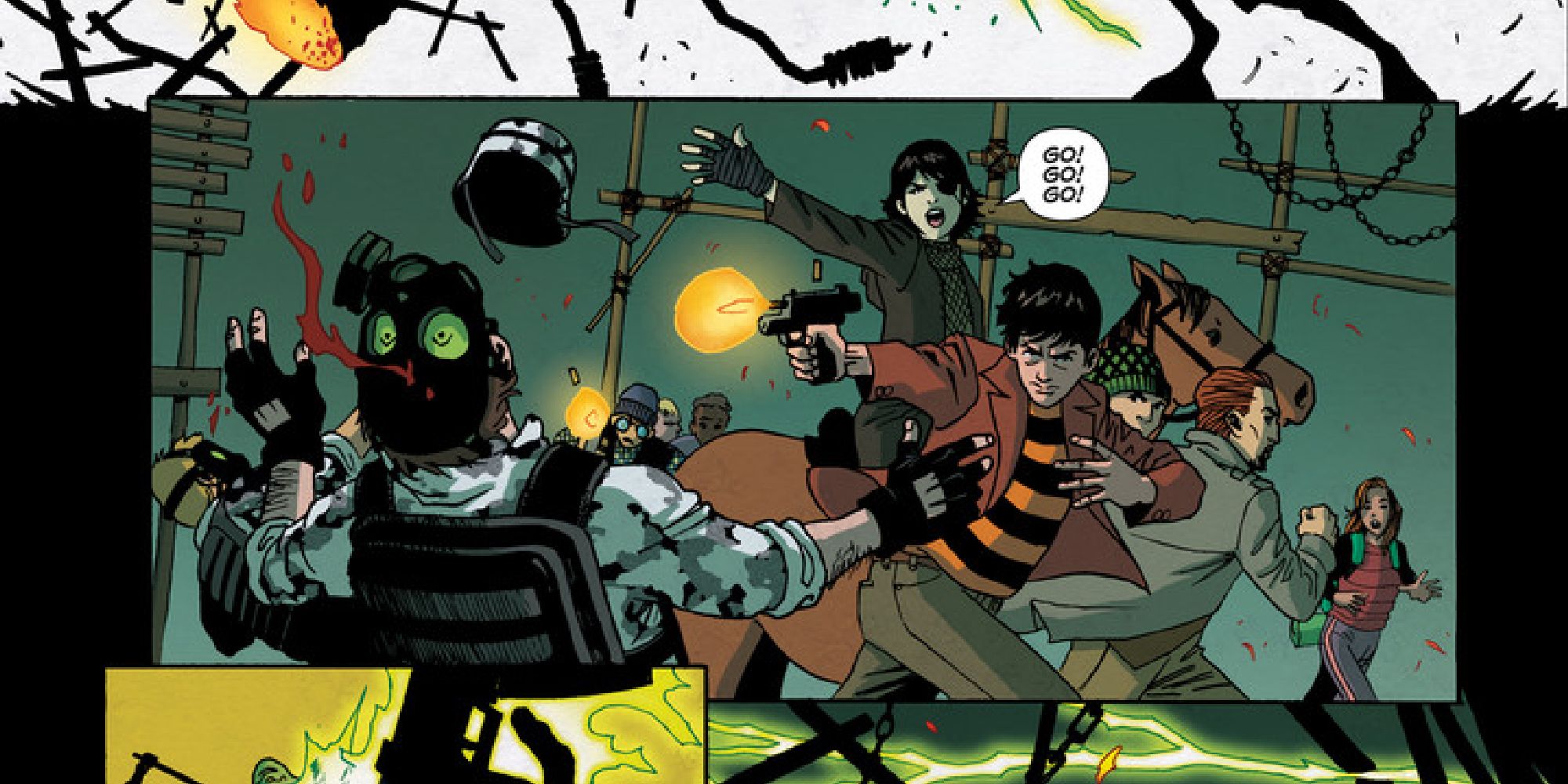 Half-Life 2 is set in the Eastern European metropolis now called City 17. It’s the seat of Combine power on Earth, even housing Dr Breen, so their presence is inescapable. Gordon is constantly butting heads and getting into gun fights with them, but America is a different story. It’s distant, abandoned, and the Combine is little more than a mutter in the dark.

“The Combine had to be this shadow that existed all over the world but you rarely saw in the comic,” Gardner says. “They’re talked about, seen by some of the people, on TV, but the idea with New Franklin is that Long is trying to create a city that exists without them, operating in a way that almost pretends they don’t exist. He infuses this city with the trappings of modern society and, as the story progresses, the Combine gets closer and closer. We bring them in more strongly as we go. But the Combine have to be slowly dripped and brought into it.”

America is a quarantine zone in the comic, meaning that human civilisation has rebuilt to become something more familiar to us as readers. There’s a governor, a democratic election, civilians getting on with their days, and a military presence protecting the walls. It’s far less alien than City 17, but still shows just how cruel and cold humanity can be.

There are mandatory groupings for repopulation, forcing civilians to have sex so they can bear children, while a coup later forms in the comic as the secrecy and polling bring everyone to each other’s throats. There’s racism against the vortigaunts while animals are forced to fight in an arena for everyone’s entertainment. Humanity can be cruel and A Place in the West unpacks that as much as it does the looming threat of an interdimensional empire. 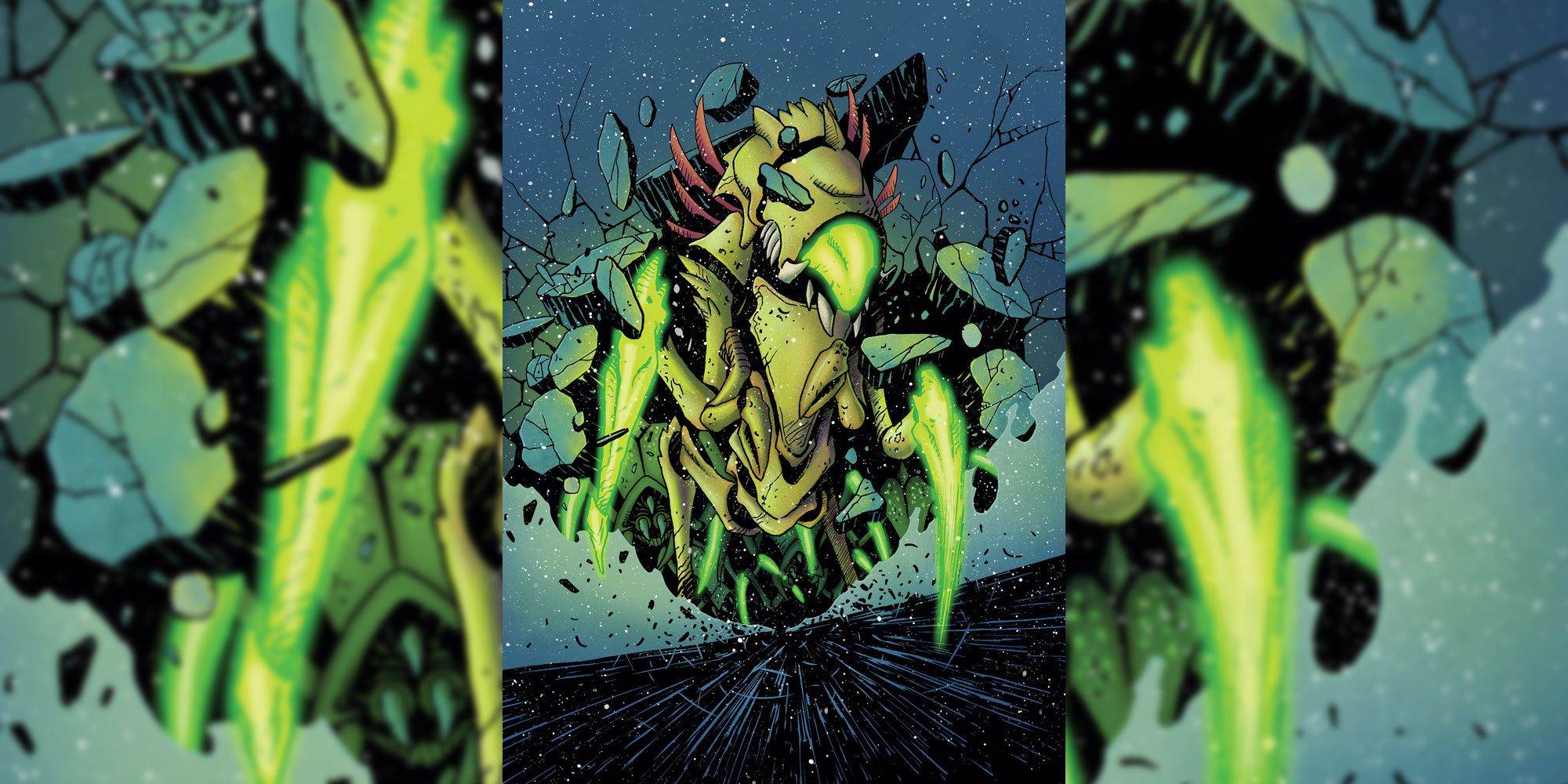 “It felt very pertinent to us to dig into how people would respond to the world being in the grip of this totalitarian evil,” Gardner tells me. “And how they would react to seemingly being free of it. We are definitely influenced by real-world events and politics has become something I feel more and more people are tuned into, now certainly more than when I was growing up. And Half-Life is a science fiction story with a powerful message about the triumph of the human spirit over the cold mechanistic Combine but when you dig into the human factions, you ultimately start to look at reflections of what’s going on in the world.

“One of the benefits of it being a comic is that our story could have more density. It could dig deeper into different things than the games could which is not a knock on the games whatsoever. They do a good job of exactly what they want to be. But for us, we wanted to introduce a political element to the story because we felt that was very important.”

However, A Place in the West keeps itself mostly separate from the games. You won’t see Kleiner taking a trip across the ocean to say hi or Adrian Shepherd pulled from G-Man’s vault to stop an insurrection. It’s self-contained with its own characters, themes, and locations.

“We never wanted to have someone like Gordon Freeman or Isaac Kleiner,” Gardner says. “They’re not going to be characters in the story in any kind of significant sense because we felt like this was an opportunity to do something new. To rely on legacy characters is to limit the world more than broaden it. But there are certain characters that our approach was, if they had relevance to the story that we were telling, we’d find a way to bring them forward without overpowering the narrative.

“Breen was a character who we felt had to have a role in the story. Bit by bit he crops up because he’s a figurehead. There was no way that he wouldn’t be on people’s lips and he was very obviously an important character. Long despises this guy and that duality between them is something we wanted to explore.”

Half-Life is the perfect world for any writer to jump into and tell a story. It’s ambiguous and shrouded in mystery, the elusive Combine an enigma who we’ve only scratched the surface of, while Earth under Combine occupation has barely been touched on either. We’ve seen a snippet of one country in one continent. That leaves plenty of room for writers like Gardner to dig into and flesh out a universe that for so long was left dormant.

“We had a really fertile storytelling ground to go through and we would ask questions about what America would look like,” Gardner says. We’d ask what our characters would think of Dr Breen or the legend of Gordon Freeman. Those were really fun things to dig into and explore. I play through the games once a year just to keep one foot in the established world but not enough to feel like I’m being overpowered by it. I’m always checking details, and combing the wikis. But my rule is not to get too hung up on lore because Valve doesn’t treat lore that way. They make it up as they go along because if you’re making video games, you’ll change the detail of the story or universe to fit the game you’re making. Gameplay always comes first. So I try to make sure in terms of what’s been established but I don’t get too worried about it.”

A Place in the West is officially-licensed, even if it’s not directly made by Valve, so while some parts might be contradicted such as the way Citadels are built, you can still easily puzzle it together with Half-Life’s world and enjoy the story Gardner has created. And that all came about thanks to Steam’s old Green Light system, letting modders and creators upload their work for review. If approved, they could even turn a profit selling their creation, and that opportunity is something Gardner holds dear.

“Valve was super kind and super generous,” Gardner says. “They gave us the opportunity to license the Half-Life name and it was lovely. It was very unexpected and a real honour. In terms of getting the comic on Steam, they’ve been absolutely lovely. It’s been a real, real privilege.”

You can read the latest chapter on Steam right now.