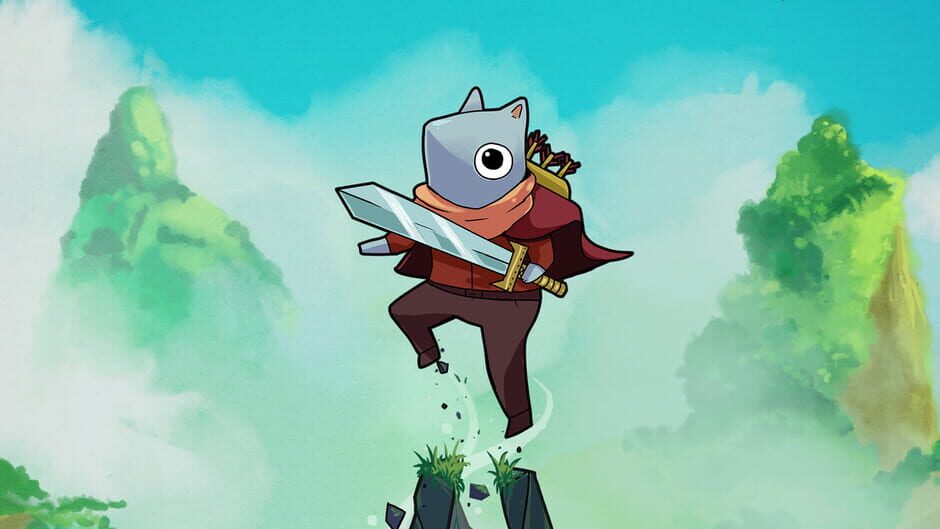 A reader reviews indie Metroidvania Islets and explains why he thinks it’s one of the best hidden gems of the year so far.

Another indie Metroidvania hits the market but when it gets so much right can we really complain if it does so much the same?

It may well be that we’ll look back on this time of indie developed Metrodivanias in the same way we now see the mid-to-late 00’s fascination with big budget, gritty first person shooters. But when the genre can deliver such a wide and varied selection of well-regarded titles, such as Hollow Knight, Ori, Guacamelee, and Owlboy perhaps history will be kinder to this era.

Islets is another game to add to that list. Developed by Armor Games Studios in California, it’s an indie Metrodivania that follows the same well-developed template of all those that came before.

You play as Iko, a little mouse and aspiring warrior, who sets out on his adventure to reunite and reconnect a number of floating islands that were once a whole.

We join Iko as he pilots his rickety wooden airship through the sky, just before he plummets from the sky and lands on one of the four previously connected islands. As we hit land the game quickly introduces the basic movements and abilities that Iko possesses, and the game begins.

As with all games of this genre we quickly approach apparent dead ends that we cannot pass. Pathways blocked by crates or blocks; walls too high to jump; glowing floating orbs that surely must do something. Clearly, there’s always another carefully developed route forwards, towards whatever misplaced upgrade ability will allow us to pass by the previously immovable objects.

It’s here where Islets really excels. The standard drip feed of new abilities, allowing you to access the often infuriatingly visible blocked routes, is timed perfectly – better in fact than almost any game in the genre that has come before. A number of times frustration at a lack of progress can be dangerously close to kicking in, only for that final corner, of the exquisitely designed map, to reveal the necessary item to further your journey. The feeling of elation and new-found freedom you experience once you’re once again bouncing around the map is perfectly judged.

It’s this finesse, this careful thought to the design of the game and the journey of the player, that really elevates Islets beyond the sum of its parts. There’s just a huge lack of friction to the whole experience that makes you feel straight at home. From the moment we first plummet to the ground, the game works exactly as you’d hope. The tutorial section is brief and clear, with you seemingly having access to exactly the type of moves and controls you’d hope.

The graphics and sound design are sharp, clear and fun. The world quickly opens out and into what feels like exactly the right kind of pacing. Boss introduction seems sensible and natural to the game world, and these come with a wonderful tune of their own. Everything just works exactly as you hope it will.

Reconnecting the four islands is the key to progressing the game and this ties in perfectly with your ever expanding abilities and the world map. Each island has its own map but once two are connected together they can open up new routes to new abilities or rewards where these islands now join. It’s an incredibly simple premise but one that, once again, feels incredibly organic and perfectly judged.

Though the map screen grows ever more complex it’s so well designed that we can start picking out new spots to visit and routes that previously didn’t exist and now have an access point from the other island. The game stops feeling like a collection of large separate levels and starts to feel like a cohesive but pretty massive open world.

Iko will come across various recurring characters, many friendly but others with ulterior motives, who will offer encouragement or advice toward the next goal. As the game opens up we’re introduced to a small floating hub world of sorts, that works as an area to upgrade certain stats and abilities but also as a gateway to the separate islands. Surprisingly, but not unpleasantly, this area also introduces small sections of another indie favourite genre to the game: the bullet hell shooter.

In these slight sections Iko can reboard his (upgradable) wooden airship and take to the skies to fight what amounts to side-scrolling shooter bosses, the first of which give a clear nod and a wink to Geometry Wars’ famous pacifist Achievement from the early days of the Xbox 360.

There’s just so much to like here; it’s perhaps a more welcoming and shorter Hollow Knight. A less aggressive Guacamelee. A prettier Owlboy. A warmer Metroid Dread. It’s hard to find too many faults with the game.

Perhaps the save points are occasionally spaced too far apart. The bosses, though fun and well designed, can feel like they need a few too many hits to dispatch on nearly all occasions, but these criticisms are few and relatively minor.

The lack of originality to the premise may be an issue for some but when everything has been planned and implemented with such clear thought, care and knowledge of the established tropes of the genre it feels almost churlish to criticise it for its lack of overall originality.

It introduces surprises that aren’t surprising and at exactly the moment you most expect. It turns out though, that surprises are trumped by generosity and that timing everything perfectly is the key to delivering a perfectly crafted experience.

This is an unoriginal game entering a crowded genre that’s so perfectly judged towards the player’s progress, comfort, and enjoyment that you instantly fall for its charms, making this the first standout hidden indie gem of the year.