For many Dungeons & Dragons players (or any TTPRG players for that matter), dice can be one’s identity. Some buy dice to reflect their character, others want to represent themselves. This has led to many specialty dice makers popping up over the years, especially as the hobby becomes ever more mainstream. Oddly enough, one of the last names D&D players cite for their dice needs is the game’s official publisher.

It seems that Wizards of the Coast has taken note that it’s falling behind in the dice market. For the past few years the company has been releasing a themed dice set to go along with major book releases. Tomb of Annihilation got one, Ravnica got one, and 2019 saw Descent Into Avernus get a Dice & Miscellany set.

These offerings have gotten ever more elaborate, pairing the dice with other “artifacts” of the setting. The Avernus set came in a special box that acted as a dice tray, and also had a map of the hellish plane and info cards. The latest set, Laeral Silverhand’s Explorer’s Kit, takes the same concept and makes it even better. 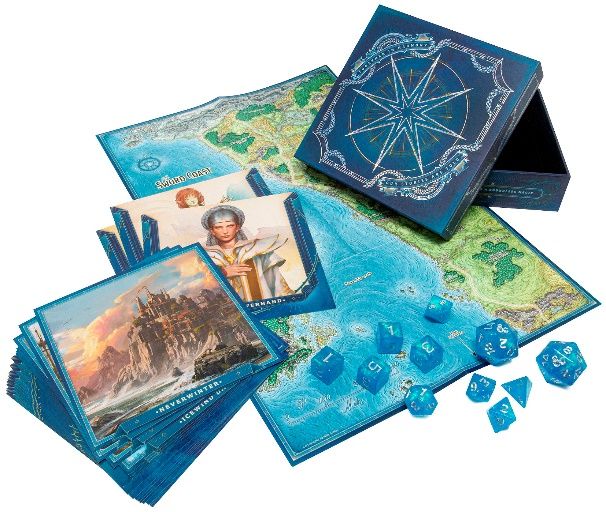 Pictured above is the D20 from both the Avernus and Silverhand sets. As you can see, Wizards decided to go big with the new set. There’s also the iconic D&D ampersand on the new dice to emphasize those crits. I also just personally love the blue-and-silver color scheme. The Silverhand dice also have a slight translucent quality. Overall, it’s a big step up from the Avernus dice and shows Wizards is stepping up its game.